Fiberglass cars were designed, built, and celebrated across the USA back in the 1950’s.  We tend to forget this because ground zero was Los Angeles, but inspiration on what they did in California percolated throughout the country – and the world.  Tom Masano from Reading Pennsylvania was one of those inspired and in 1952/1953 put together a handsome sports car body for the Henry J chassis/drivetrain.  Tailfin and all.

The Henry J (also known as the Allstate) was sold from 1951 thru 1954 and was a great choice for the foundation of Specials back in the 1950’s.  First, it had a wheelbase of 100 inches which was perfectly suited for the bodies of most fiberglass cars sold during that time.  Glasspar, Victress, Allied, Woodill, and most others offered their most popular body with a near 100 inch wheel base size.  This meant that if you could locate a Henry J / Allstate chassis – you had little modification to do (the typical 1940’s Ford frame required shortening and lowering to get it to the same size and configuration.)  Second, the Henry J had independent front suspension which (in theory) was an upgrade over the straight front axle of the standard 1940’s Ford frame.

Masano leaped at the opportunity to put together a car that would at the very least – gain interest for his automobile dealership – and at most perhaps be something that could be sold after the first one was completed.  A design was chosen, and a nicely appointed tailfin was added in the rear center of the car, and they were off and running.  The finished car was perfectly suited for the frame, and although the car had no trunk, it was nicely proportioned for its design.

Popular Mechanics in May of 1953 featured the car as well as the 1954 Trend Book #109 on Custom Cars.  Both are shown below, and the car may have been featured in other magazines too.  If any of you find some of these stray articles out there on this car, be sure to let me know.

Today, the Masano Special resides in a small Pennsylvania Auto Museum, and the opportunity still remains to do a bit more research on the car.  Legend has it that the Masano family still resides in Reading, PA so any of you who have the research bug in them like myself, can join in the hunt for information and help document the car for our group in greater detail.  Anyone up for the taking???  You might find a stray tailfin in your meanderings on this one…you never know.

Thanks to Leslie Kendell of the Petersen Automotive Museum for the recent color pictures of the car and to Paul Sable, good friend and automobile historian extraordinaire for helping me put together the linkage between the pictures and the car – still on display in a Pennsylvania museum today.  Paul has promised to take some pictures of it for us during this holiday season, and as soon as I receive them, I’ll post them in our story here as an update.  Thanks guys!

Update:  Paul Sable wrote in today (12/21/09) with the following comments:  Geoff  I did not look at the story yet (on my way out the door) but the car is at the Boyertown Museum and I need to go down to Boyertown tomorrow to pick up some powder coating and will visit the Museum and get photos and a contact as well.  I know I have some info on the car but think they will have much more. Will get back to you tomorrow.  Paul 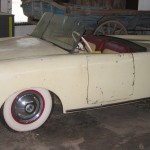 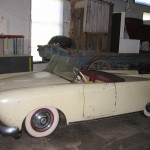 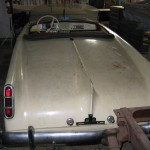 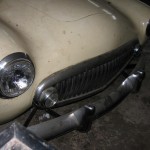 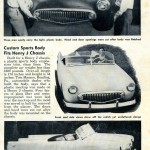 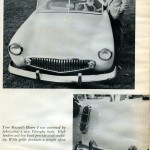 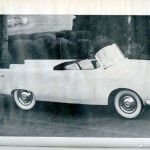