Here's a Close Up of Bud Kennedy with the Body Off to the Side, and The Beautiful Chassis Displayed in All Its Glory.

The best article focusing on a Bangert bodied car, no doubt, appears in the November 1962 issue of Hot Rod Magazine.  The article opens with the statement:

“As Fine As They Come”

They were right on target with their write-up.  I couldn’t agree more.

An Article – Or Maybe More 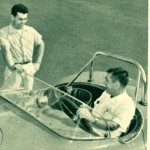 In This Photo, the Caption Says Bud Kennedy is In The Car and Don Collins (Who Built the Chassis) Stands Outside. I believe The Article Has the Names Reversed - Based on the Color Picture in Hot Rod Magazine.

It’s an interesting article on Bud Kennedy’s car because….it’s not an article.  It is a series of wonderfully detailed pictures – and one full page color shot too – and very detailed captions that accompany each picture.  It’s expertly written, but there’s no story that goes with the 4 page write up so….let’s fix that.  Let me try and create a story based on the captions and make it a bit easier to follow.

The Man, The Car, The Build

The article opens by talking about the high level construction of the car:

“If there is such a thing as a mechanical art, Bud Kennedy’s superbly detailed sports car would have no difficulty qualifying for the distinction.  In fact, the nude unit is so striking it’s almost a shame to enclose it with the bright red Bangert glass body.” 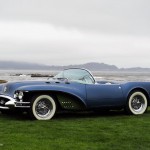 Noel Bangert (Marshall) Penned the Design of His Manta Ray in 1955 Based on the 1954 Buick Wildcat II Showcar. What a Beautiful Design For a Show Car of This Era.

Of course you know me.  I would rather have the beautiful Bangert body up front and the detailed chassis behind.  But I know not all of you agree with me, so for those of you who love the “build” of a car….this article’s right up your alley.

Certainly the author was impressed by the car.  The author might have been the photographer – Pete Sukalac – but that’s unknown at this time.  What’s interesting is that this car uses a Bangert body known as the “Manta Ray”.  When my good friend Marshall Foxworthy and I interviewed Noel Bangert a few years ago, he stepped us through the bodies he designed.  His second design, the Manta Ray, debuted in early 1955 and was based on the Buick Wildcat II showcar.  We’ll talk more about the Bangert Manta Ray design in future stories.

But what I alluded to before was the choice of the Manta Ray body.  Noel stopped producing Bangert bodies around 1957-1958 so Bud Kennedy must have gotten this body much earlier – or from someone else who bought it much earlier.   Few of these Manta Ray bodied cars exist today – so far Rick D’Louhy and I have found 4-5 of these cars.

The article does give a clue to why this body was chosen in the following caption:

“‘The body was left over from another Kennedy project, and may soon be replaced by an aluminum skin.”

From what I know about the history of the car, the body was never changed. 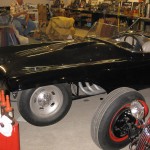 Today, the Kennedy Special Resides at the Home of a Collector in the Northwest United States - in Beautifully Restored Condition. Now Painted Black, No Longer Red As It Appeared in Hot Rod Magazine.

“Don Collins, built the chassis with one thing foremost in mind – performance.  Bud finds that it has dragster acceleration, a top end fit for the salt flats and handling equal to many very expensive imports.”

“With the body set aside during Northwestern car shows, the black frame and gobs of chrome never fail to draw plenty of admirers.  We call your attention to the electrical switches lined up in the floating instrument nacelle.”

The Kennedy Bangert Special never left the Northwest United States.  It still resides in the area and is wonderfully cared for by collector and automotive historian Scott Perrott.  Special thanks to Scott for sharing the pictures I took during my visit in 2008 to talk cars and see his collection.  Scott….you have one beautiful Bangert Roadster on your hands – and a fast one at that too!. 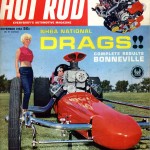 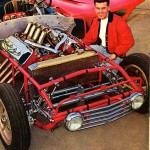 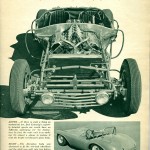 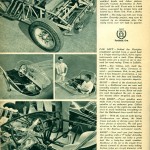 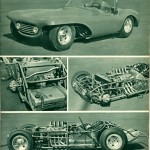 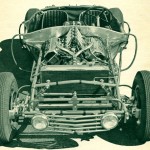 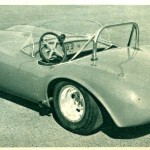 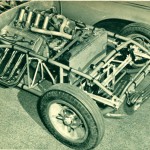 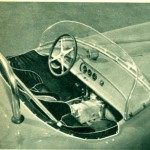 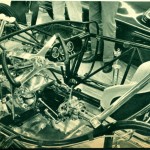 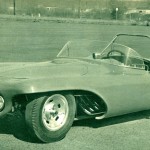 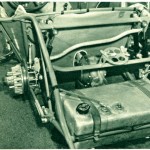 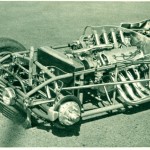 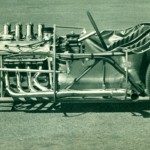 Noel Bangert (Marshall) Penned the Design of His Manta Ray in 1955 Based on the 1954 Buick Wildcat II Showcar. What a Beautiful Design This Is. 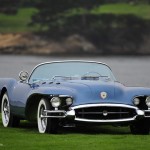 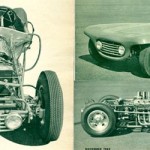 Today, the Kennedy Special Resides at the Home of a Collector in the Northwest United States – in Beautifully Restored Condition.