This section of our website is under construction as of 10/1/2019.  We will continue adding details and features over the next few months so check back and see our progress.  And….welcome to our home page on Victress Manufacturing 🙂 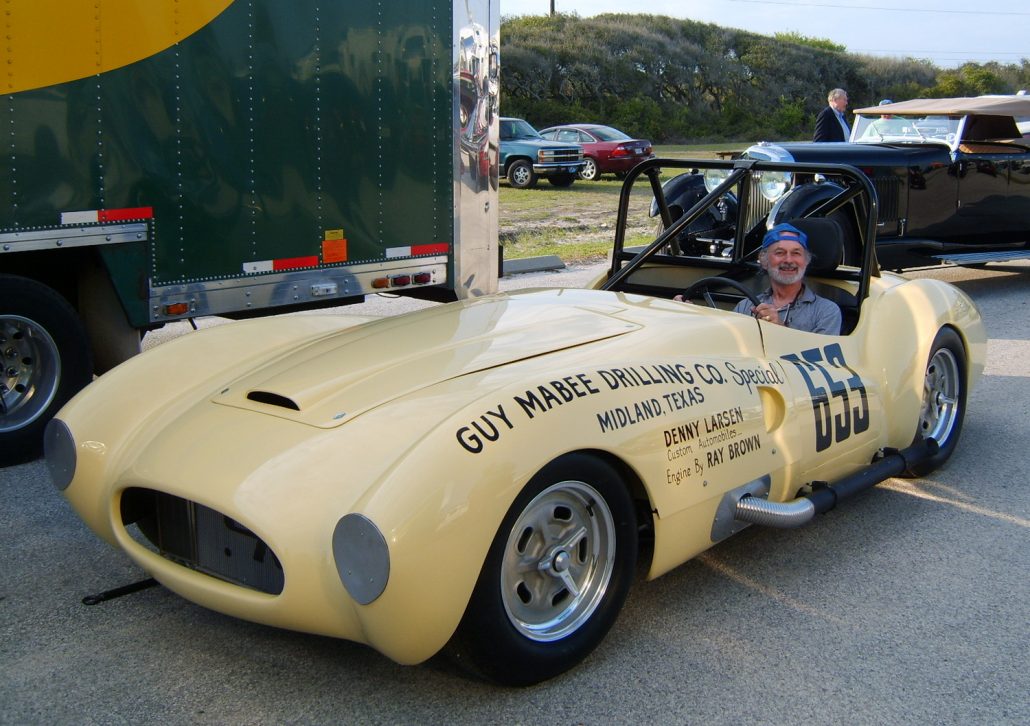 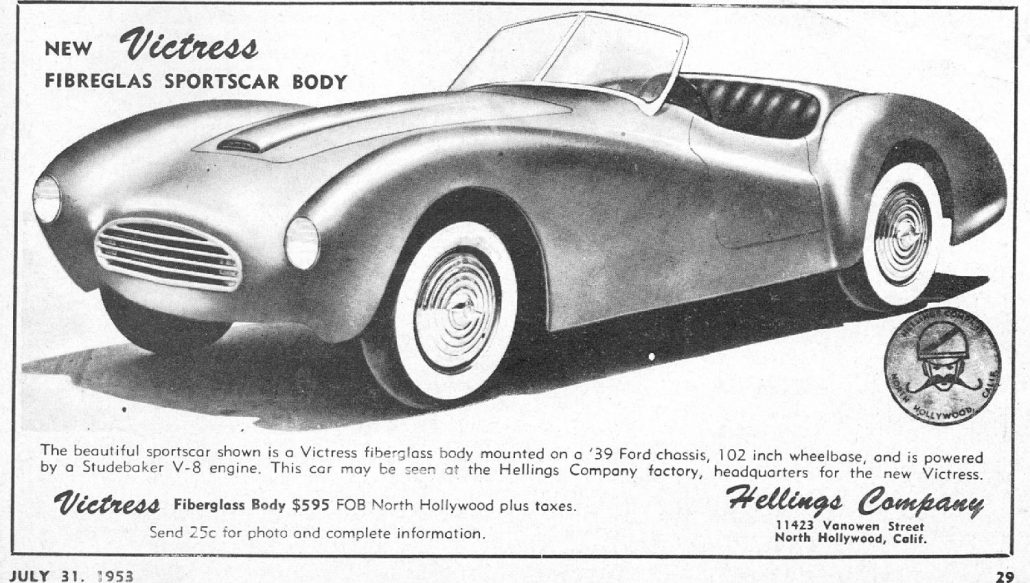 Victress First Appeared in Literature in this Hellings Ad which was published in Motor World Magazine on July 31, 1953.  The car shown was built by Virgil Rice of Hellings Company and appeared later in the year in the 1954 (release date) movie “Johnny Dark” Starring Tony Curtis, Don Taylor and Piper Laurie.

Victress was started by Doc Boyce-Smith in 1952 as the “Boyce-Smith Company” with the intention of providing sports car bodies to the growing legion of you men in America who wanted to build their own car and run it or race it.  Their first car was co-designed by Doc Boyce-Smith and his close friend Hugh Jorgensen.

This car was called the Victress S1 and was an immediate success.  It was designed as an alternative to the Jaguar XK120 look, and was the first of several body styles designed by Victress from 1952 thru 1961 that kept them at the top of the list in terms of design and innovation.

In July 1953 Merrill Powell was honorably discharged from the Air Force (2 years active duty) and returned to his home in Los Angeles, California.  Merrill became an Art Center student (car design) and friends with Hugh Jorgensen – another student.   In November 1953 Merrill went to the Petersen Motorama and saw the Victress cars being built during the show.  After the show, Hugh introduced Merrill to Doc (Hugh and Doc had been fraternity brothers at UCLA).  The Victress S1 was still the only body being produced in 1953.  In late 1953 the S1 was altered and changed from a 102 inch wheelbase to the new S1A which had a wheelbase of 99 inches.  S1’s were no longer made after 1953.

On February 15, 1954 Merrill purchased 49% of the company and it was named as “Victress Manufacturing Company, Inc.”  Doc Boyce-Smith was President and Merrill Powell was Vice President.

Hugh Jorgensen started his clay mockup of the Victress S4 in late 1953 and the mold for the S4 was pulled in early 1954.  The Victress S4 started being offered in the summer of 1954.  About that same time, Hugh Jorgensen designed a European looking (with Aston Martin influeces) 116 inch wheel base roadster called the S4.  The 116 inch wheelbase was chosen so that frame modifications were minimized or eliminated in building this car.

The C2 and C3 Coupes- Italian influenced and smart for their time.  Victress bodies were used by both race car drivers and sports car enthusiasts throughout the 1950’s and into the 1960’s when Victress was purchased by LaDawri Coachcraft in 1961. 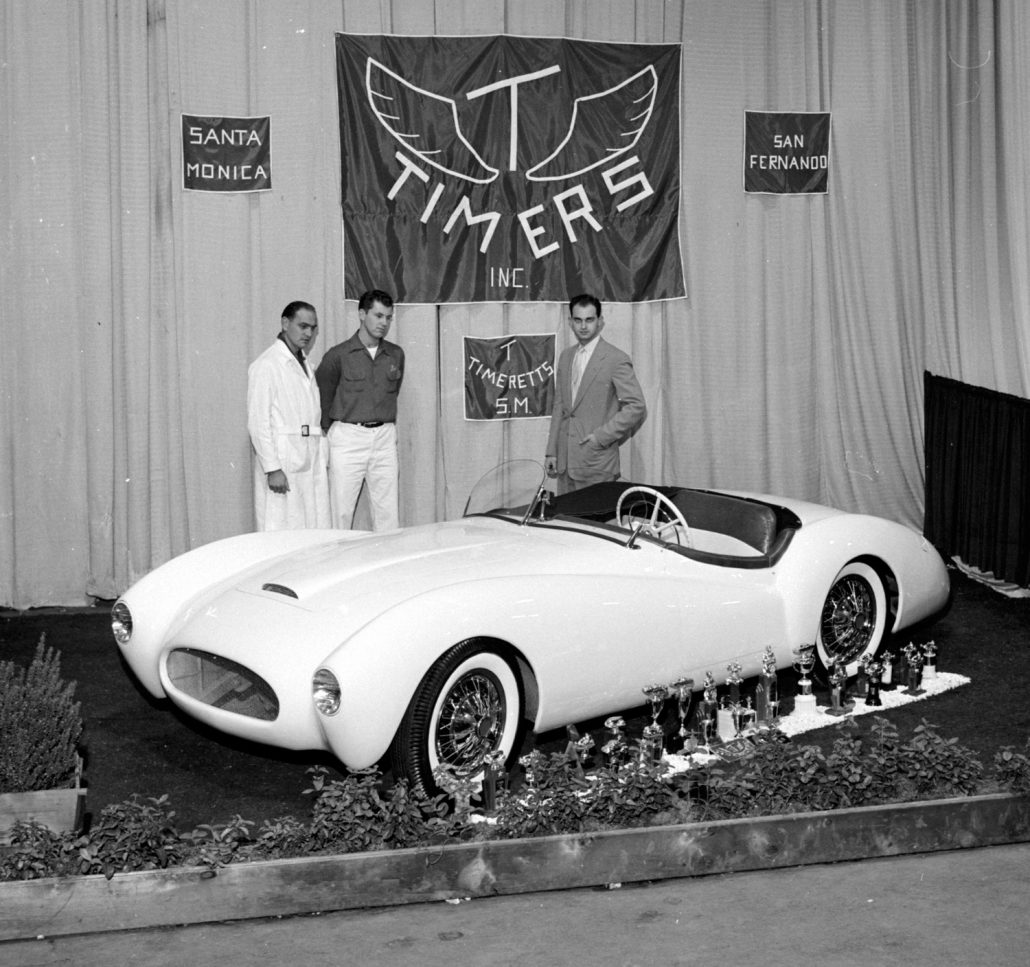 Vintage Articles, On The Web, In Print, Podcasts, Videos and Events/Concours Attended

Mel Keys
Friend of Victress in the 1950s

Personality  Profiles
Review  All  Contributors  and  Supporters  of  Undiscovered  Classics