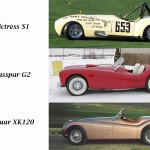 Here’s A Side by Side Comparison Of The Jaguar XK120 With The Glasspar G2 and Victress S1A. You Can See Similarities In Style, Size, and Wheelbase.

This is the first installment of a 3 part series of articles on “Designs That Influenced The Styling Of The Victress S1 And Glasspar G2.”  Here are links to the other parts of the story:

What is the styling heritage of each of the vintage fiberglass cars we own?

I think this is an important question when trying to understand the place our cars occupy in history – not just in the manner in which they were built but also in the ways each of our cars were styled.

This was the question that Erich Schultz and I have been discussing recently, and the car we first began focusing on was the Glasspar G2 designed by Bill Tritt.  Then we turned our attention to the Victress S1 designed by Doc Boyce-Smith and Hugh Jorgensen.   Each of these cars owes their design heritage, in part, to the Jaguar XK120 – and another earlier car which I think you’ll find surprising. 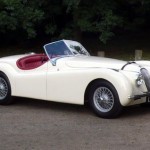 The XK120 Has A Regal Appearance And Was Quite Fast Too. Both Tritt From Glasspar And Boyce-Smith / Jorgensen From Victress Were Greatly Influenced By Its Design.

The XK120 was introduced in 1948 and was an immediate hit with sports car enthusiasts across the world.  As reported by author Robert Cumberford in his book, “Auto Legends: Classics of Style and Design” in 2004:

“The XK120 was an astonishing tour de force for Jaguar when it appeared at the end of the 1940s in a country still suffering the privations of wartime long after victory had been declared…..The 3.4-litre capacity gave 160 BHP, an unheard-of figure at the time, and the performance – it was the fastest road car ever offered for sale in Britain – excited a nation living a grey, rationed life.

Hollywood took to the XK120 in a big way: Humphrey Bogart and Clark Gable were among the stars who bought them.  Nothing on the road was more dramatic than the XK120….More than anything else, the XK120 established Jaguar as a world marque.  At its wheel drivers such as Stirling Moss and Formula One world champion Phil Hill showed what it could do.  It was, and is, a masterpiece.”

This was the automobile that “set the bar” in styling and performance, and within the fiberglass world of the 1950’s, two specific companies were significantly influenced by its design:  Glasspar and Victress. 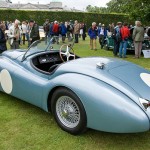 Here’s A Rear Shot Of The Jaguar XK120. It Was A Beautiful Streamlined Design.

Numerous interviews and magazine articles have confirmed Bill Tritt’s admiration and respect for the XK120, and how he used the design to help shape and contour the Glasspar G2 body.   When you compare the two bodies, you take note of many similar features:

There were notable differences such as:

Overall, the G2 was a nicely designed, well-built styling alternative to the Jaguar XK120, and the heritage of Tritt’s design is easily seen (and proudly reflected) in the origins of the Jaguar.

The Jaguar XK120’s Influence on Victress: 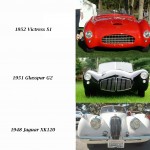 Although The Size and Profile Of The 3 Cars Above Are Similar, The Styling Treatment For Each Front End Differs Radically.

So let’s turn our attention toward the Victress S1 designed by Doc Boyce-Smith and Hugh Jorgensen.

Recently I interviewed Merrill Powell from Victress about his memory of the design of this car.  He remembers the following:

I’ve posted the interview with Merrill Powell below.  It is 2 minutes long.  Click on the triangle below to listen to Merrill’s thoughts and memories concerning the design of the Victress S1 back in 1952:

Merrill also remembered that the S1’s wheelbase was – like the Glasspar G2 – was identical to the Jaguar XK120.  Victress shortened the wheelbase to 99” inches in late 1953/early 1954 to match the newly released Kurtis KK500 chassis that Frank Kurtis had just designed and offered for sale.  Also, like the G2, the track of the Victress S1 was wider to accommodate a standard American chassis/suspension width. 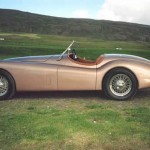 When You View The Profile Of the Jaguar XK120, You Can See The Clear Influences It Had On The Glasspar G2 and The Victress S1.

Technical Specifications of the Jaguar:

For those of you interested, here are the technical specifications of the Jaguar XK120:

So the heritage of both of these well-known fiberglass cars (Glasspar G2 and Victress S1) is nicely revealed in the birth of the 1948 Jaguar XK120.  But was this the only influence on stylists of the 1950’s – including Bill Tritt, Doc Boyce-Smith, and Hugh Jorgensen?  Erich Schultz thinks not, and recently introduced me to another car which appeared much earlier than the XK120, and that’s the 1939 BMW 328 Mille Miglia Roadster.  And….we’ll discuss this BMW in the near future.

Here’s A Side by Side Comparison Of The Jaguar XK120 With The Glasspar G2 and Victress S1A. You Can See The Similarities In Style, Size, and Wheelbase.

The XK120 Has A Regal Appearance And Was Quite Fast Too. Both Tritt From Glasspar And Boyce-Smith / Jorgensen From Victress Were Heavily Influenced By Its Design.

Here’s A Rear Shot Of The Jaguar XK120. It Was A Beautiful Streamlined Design In Every Way. 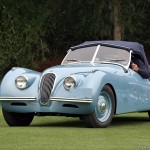 Although The Size and Profile Of The 3 Cars Above Are Similar, The Styling Treatment For The Front End Differed Radically. 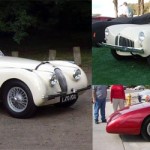