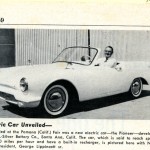 Here’s The One Picture And Caption We Have Of The Pioneer Prototype. This Appeared in a Trade Journal in 1959.

This story is for my good friends John Gulow and Javier Munoz – both who are Nic-L-Silver Battery “Pioneer” car enthusiasts, and one (Javier) who owns at least one of these cars.

George Lippincott was founder and president of Nic-L-Silver battery company – a very successful battery company back in the 1950’s.  In the late 1950’s, George was inspired by all of the fiberglass bodied sports cars being produced in Southern California and wanted to join in and produce his own battery powered electric car (presumably to use and help promote Nic-L-Silver batteries).

It was 1958 and George started assembling his team – and he brought together some of the best talent available at the time.  His team included Frank Kurtis to help with the chassis design, a torsion bar expert, Bill Jahns – son of the founder of Jahns Piston Rings, and others.  George came to Victress for their expertise in designing a body and assembling the car. 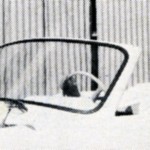 Here’s A Close-Up Of George Lippincott – Taken From The Same Photo.

Part of the challenge of the project was to work within a very short timeframe to produce the entire car.  Merrill Powell remembers this was somewhere between 2 and 3 months.  Also, George Lippincott didn’t want to go thru the expense of creating a car shape from scratch (either plaster or clay), modeling it, taking molds, pulling a body, and all of the other activities required to create a body of a unique design.

So instead, Victress was tasked with creating a car out of existing Victress body parts and fiberglassing them together, and making subtle changes.  This allowed them to create a new body style based primarily on Victress S4 body components.  Hugh Jorgensen, Art Center student and close friend of Doc Boyce-Smith was in charge of the body design.  If you remember from earlier stories, Doc and Hugh combined their talents early on to create the design of the first Victress S1.

Merrill Powell’s Memories of The Chassis:

Merrill recalls that the chassis built by Frank Kurtis had 2 electric motors mounted at the end of trailing arms.  Merrill’s right on target here.  In the January 1960 issue of Sports Cars Illustrated, the same design is mentioned for a later post-prototype Nic-L-Silver car based on an Alken fiberglass body (more about that in a future story).  The editors of Consumer Guide in 2007 also discussed Frank Kurtis building the later chassis with a unique torsion bar suspension and twin 8-horsepower motors driving the rear wheels by chain. 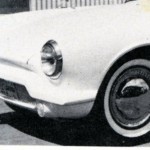 Here’s A Close-Up Of The Front Of The Pioneer – Styling By Hugh Jorgensen Was Based On (Or Taken From) The Victress S4 – Another Car Designed By Hugh.

Batteries were plentiful – under the seats almost from the front to the rear axle.  Merrill remembers that it handled well when completed and was pretty fast too!  Merrill believes the finished car had about a 100” wheelbase, but close inspection on the one surviving picture makes me think it’s a bit smaller.

Debut of the Pioneer Prototype:

The debut of the car occurred in 1959 at the Los Angeles County Fair in Pomona, California.  Merrill recalls it was received quite well.  He has a funny story to share about the debut.  I’ll let him tell it rather than repeat it here.  I have placed the entire interview I did with Merrill on our website for those of you interested in hearing it in Merrill’s own words.  It’s about 12 minutes long.

Click on the triangle below to listen to the interview:

Shortly after the debut of the Pioneer Prototype in Los Angeles, Lippincott decided to switch tactics and use the VW based fiberglass Alken bodies for his car.  Probably not a bad idea, given that the bodies could be readily purchased and the VW chassis were easy to obtain (although now that I think about it, the later article on the “Pioneer” Alken mentions the Kurtis chassis again, so it still remains to be seen if the Alken based Pioneers used any VW chassis/suspension parts or if the chassis were most of Kurtis design and parts of his choice).  We’ll discuss more about the Alken based Pioneer cars in future stories.

All that Merrill and I have found concerning this Victress produced “Pioneer” prototype is the one picture shared in the story today.  It most likely appeared in the magazine “Automobile Topics” or another similar “trade journal” of the day.  The date is cut off but not the year – 1959.  Also of note is that George and his car appear to have been photographed at the Victress factory in North Hollywood, California.  Here’s the text of the caption below the photo: 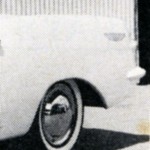 This Is The Only Glimpse We Get Of The Styling For The Rear Of The Car. Looks Like It Might Be Quite Attractive!

Electric Car Unveiled – Unveiled at the Pomona (California) Fair was a new electric car – the Pioneer – developed by Nic-L-Silver Battery Company, Santa Ana California.  The car, which is said to reach speeds up to 50 miles per hour and have a built-in recharger, is pictured here with Nic-L-Silver President, George Lippincott, Sr.

We’re still looking for more pictures of the car, and we will share them if any are found.  As for the car itself, once it left Victress, it was never seen again.  Another lost car for you to find out there gang!

Here’s The One Picture – And Caption – We Have Of The Pioneer Prototype. This Appeared in a Trade Journal in 1959. 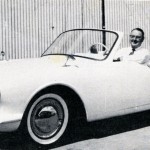 Here’s A Close-Up Of George Lippincott – Taken From The Same Photo.

Here’s A Close-Up Of The Front Of The Pioneer – Styling By Hugh Jorgensen Was Based (Or Taken From) The Victress S4 – Another Car Designed By Hugh.

This Is The Only Glimpse We Get Of The Styling For The Rear Of The Car. Looks Like It Might Be Quite Attractive! 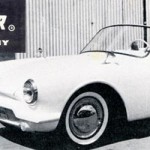