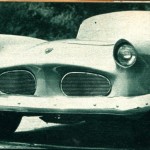 The Front Of The Grantham Stardust Certainly Had Stylish Appeal – It Pre-dated The Basic Ford Headlight “Hood” That Debuted in 1955 by 2 Years.

Here’s one of my favorite cars of all time – the Grantham Stardust – built and sold by William “Bill” Grantham, and designed by Frank Evans in late 1952 / early 1953.  Over the past few years, I’ve had the chance to learn quite a bit about the Stardust from several sources including:

There is quite a bit to discuss about this car, so I thought we would start out simple, and review an excellent article from Motor Trend that discussed the car in detail.  Here we go gang…a review of the article as it originally appeared in September 1953: 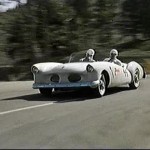 Nowadays it really takes something unusual to make an impression in the world’s most impressionable city – Hollywood.  The method of would-be movie queens and leading men is to be seen often – and in style.  There’s nothing new about the formula: to get around town, one must have a low, sleek, unusual car. Bill Grantham’s “Stardust is that Hollywood Stopper.

Built of Fiberglass, the Stardust sports car body is adaptable to almost any chassis.  Grantham expects progressively stepped-up production to meet the demand.  The Stardust may be purchased as a complete car ($3750 F.O.B. Hollywood) on a modified Ford chassis shortened to a 110-inch wheelbase, or as a body kit ($950 includes windshield and hardware).

In order to fit under the low hood, the engine has been lowered five inches and set back 19 inches.  The complete car weighs 2650 pounds.  Far-forward headlights and contoured grille of pleasing design give the Stardust its eye-catcher appear. 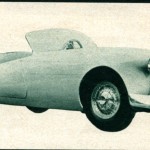 When You Examine A Grantham Stardust Up Closely, You’ll See The Artistic Form Emerge From The Car. Jeri Clark Remembers That They Created The Shape Out Of Clay Formed Over a Jaguar XK120.

The Grantham Stardust company lasted about 2 years during which time they built a total of 12 cars/car bodies.  Jeri Clark who worked for Gene Schneider Plastics that built all 12 bodies reports that one Stardust burned to the ground back in the day, so 11 cars might have made it to the present day.  Currently, four Stardusts have been found leaving seven more Grantham Stardust cars whose whereabouts are unknown.  More cars to find gang….

Back in the day, at least two movie stars owned a Grantham Stardust – and they were brothers.  These were Pedro Gonzales-Gonzales, and his brother Jose.  Both acted in movies (typically Westerns) from the 1950’s forward.  I’m currently in the process of contacting the families of both actors, and will hopefully have additional information to share in the near future.

The Stardust was unique in many ways including:

* One of earliest fiberglass car companies – if not the earliest – to create separate molds for each piece of the car (molds for each door, hood, front clip – including rocker panels, and rear end of car, totalling five separate pieces for the mold.  Bodies were “assembled” once the 5 separate parts were laid up and cured.

* And other features too – we’ll discuss these in coming stories. 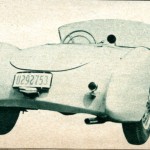 The Grantham Stardust was also used in at least two movies (“Johnny Dark” and “Menace From Outer Space”), and two TV Serials – “Rocky Jones Space Patrol” and “Mr. North.”  It may have been used in more movies and TV shows as well – research continues.  The Stardust was one famous car gang – and it’s virtually “forgotten” – except for our group – by today’s automobile enthusiasts.

I look forward to sharing the history of this company in great detail in future stories.  This is quite a neat car gang, and I think you’ll agree – it’s worthy to be remembered in every way. 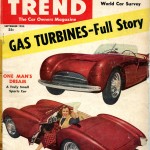 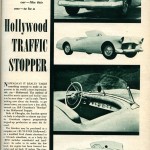 The Front Of The Grantham Stardust Certainly Had A Stylish Look – It Predicted The Basic Headlight “Hood” 2 Years Earlier Than Ford Debuted It – In 1955.

When You Examine A Grantham Stardust Up Closely, You’ll See The Artistic Form Emerge From The Car. Jeri Clark Remembers That They Created The Shape Out Of Clay Put Over a Jaguar XK120. 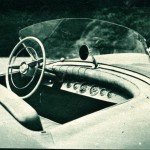 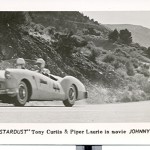 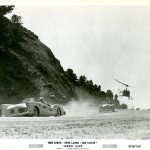 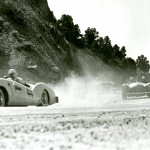 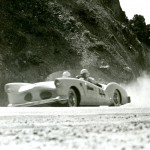 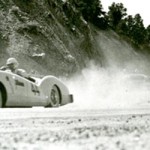