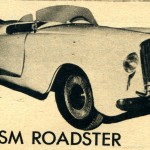 Here’s A Nice Picture of Perry Fuller’s 1953 Singer Special – We Believe This Was Taken At Vaughan Motors in New York City.

I’ve been fortunate to have excellent help from all corners of our planet in terms of research into fiberglass sports cars of the 1950’s and 1960’s.  In the past year, two folks who are both automotive historians for the British car “Singer” have pitched in and have either helped – or led the way – in terms of locating new and important information on fiberglass Singer specials of this era.   These folks are Peter McKercher and Phillip Avis.

Today’s article is authored by Peter McKercher who has been working with me and helping me understand Singer history as it relates to Singer’s efforts to produce a fiberglass sports car called the SMX.  This was introduced in late 1953.  The development of this car is strongly related to the history of a Singer special built by Perry Fuller, and perhaps sponsored by Bill Vaughan of Vaughan Motors.

Peter is an automotive historian, and Vice-President of the North American Singer Owners Club.  He is also founder of the Canadian Singer Registry and a longstanding member of the UK Singer Owners Club.  Peter has been collecting, restoring and writing about Singers for over forty years and currently owns two 1934 Nine Sports and a 1934 Le Mans. He has also owned and restored a 1954 SM 1500 Twin carb.

He authored and recently published the book “Racing Roadsters – Singer’s Post War Racing History in North America,” which examines Singer’s involvement in the Sports Car Racing scene of the Fabulous Fifties.  The focus of his current research is on North American fiberglass Singer Specials springing from the same Golden Age. 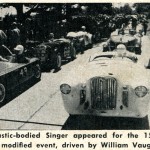 Here’s A Straight On Shot Of Fuller’s Car At The Starting Line Being Driven By Bill Vaughan At Bridgehampton, New York in 1953.

Let’s allow Peter to tell the story of the Perry Fuller Singer Special and the Singer SMX as he sees it:

Central to the theme of Forgotten Fiberglass is the notion that this niche market played an important role in the development of the automotive industry. While many of the ventures and grand ideas of enthusiastic innovators of the day are long forgotten, the influence they as individuals had on construction techniques and automotive design of the big players was substantial.

A case in point is how the fiberglass revolution played out with Singer Motors, once England’s third largest car manufacturer, who’s Singer Roadster was well represented among the ranks of sports cars fuelling the enthusiasm of the American driving public.

“Every newly announced fiberglass-bodied  sports car seems to have a Singer chassis lurking under it.” 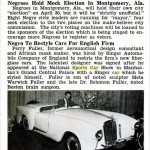 This Short Article Appeared in Jet Magazine on April 23rd, 1953. It Discussed The Recent Showing Of The Car By Perry Fuller In New York City.

Small wonder, as it was one of the first British sports cars to ride the wave into the U.S after World War II.  It was inexpensive, yet an excellent performer and in its ultimate incarnation as the SM 1500 Roadster, with independent front suspension, overhead cam and dual Solex carburetors, it proved to be a formidable competitor on the track in the under 1500cc production class.

“The Singer SM 1500 is a well designed and well built sports tourer that performs very creditably. It is a near perfect answer for a man who wants a low priced sports car with seating for four people”.

The one fly in the ointment, however, was its styling. With its low cut doors and high radiator, it had a distinctly old world look in the new world order. What better candidate for a face lift at a time when building a better body using polyester resin could be moved out of the exclusive domain of the large manufacturer.

Undoubtedly Singer was aware of the stylistic shortcomings of its roadster and was looking for ways to enhance their product, especially in America. The U.S. had become the Company’s primary market where they had seen sales of their 4A Roadster (for export only) treble between 1949 and 1950.

All of this business was being channeled through their exclusive U.S. Distributor Bill Vaughan and his company Vaughan Motors of New York City.  Given the brisk sales he was achieving,  it seems only logical that Singer Motors would look to him for trends on the continent that they could capitalize on to further enhance the appeal of their cars to the American public.

Vaughan, of course, was acutely aware of the rising interest in the use of fiberglass in sports car design and construction.  Although neither an innovator nor builder, when he saw a good idea, he was quick to make it his own. 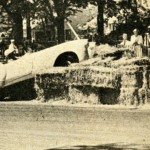 Up And Into The Hay Bales Goes Bill Vaughan – This Series Of Pictures of Vaughan at Bridgehampton, New York Appeared In Motorsport Magazine, October 1953.

In this regard, he saw a golden opportunity when Bill Tritt introduced the very elegant Glasspar G2 to the West Coast. Whether Vaughan felt the Glasspar concept was a reasonable fit for the Singer market or just a big idea that would promote Vaughan Motors itself, is open to speculation.

However, he jumped at the chance to have Tritt mate a Glasspar body to a Singer Roadster chassis, badged it as a Vaughan Singer Roadster, and entered it in the 1952 International Sports Car Show in Manhattan. Surely the display was a hit, but little is known as to what happened after.  While there is some evidence to suggest that the car ran a few trial laps at Bridgehampton Raceway shortly after its debut in Manhattan, nothing more seems to have come from Vaughan’s experiment, and the car remains “lost” as of today.

However, his involvement in a subsequent glass based Singer project would prove to have a much greater influence on Singer Motors with respect to their design program.   The inception of the project is highly speculative, but centers around a one-off car styled by 37 year old Perry Fuller and displayed at the 1953 International Motor Sports Show at New York’s Grand Central Palace.

The Debut of The Perry Fuller Singer Special

Fuller was the son of prominent brain surgeon and neurologist Solomon Fuller and his wife Meta Warwick Fuller, a sculptor of note. The younger Fuller was an aeronautical engineer, who had turned his talents to automotive design. According to his nephew Marc Fuller, Perry was a remarkable individual who was always producing fanciful car designs and had a flair for creating molds. One of his designs came to fruition in the form of a very stylized fiberglass car based on a Singer chassis. 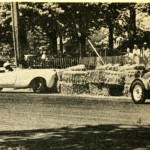 Here Vaughan Is Shown Just Leaving The Race Course – Not A Fun Thing For Any Driver – Particularly In The Golden Age of Racing With Limited Safety Equipment.

What remains speculative is the relationship between Fuller and Vaughan.  Fuller lived in relative proximity to Bill Vaughan, a man of big ideas and the sole U.S. importer and distributor for Singer. It’s plausible that Vaughan was aware of Fuller’s project from the outset. He might even possibly have supplied the chassis for it. In fact, Singer factory records show that Vaughn had been sent 3 Chassis Knock Downs (bare chassis) in mid October 1952, one of which Fuller could have used. For that matter, it’s certainly possible that Vaughan had commissioned the entire project.

What is known is that their relationship was well sealed at least by January of 1953. In an article published in the February ’53 issue of the International Car Review, the Singer SM 1500 was written up in a section of the magazine covering the British Motoring Industry. In that review, it was noted that the SM 1500 could be “optionally obtained with an open two-seater ultra modern body of fiberglass, provided by the importer at just $2895 and the regular roadster is $2195″. The article displayed images of the SM 1500 Roadster as well as Fuller’s completed special.

Given that Vaughan was offering the re-bodied roadster as a Vaughan Motors option and nailed down the price at a $700 premium over the production Roadster, it seems likely that Fuller’s car would have taken a featured place in one of the several spots allocated to Vaughan at the International Motor Sports Show at the Grand Central Palace in Manhattan in April ’53.

The displays were barely down at the Grand Central Palace, when Vaughan had appropriated the car and had it on the track at Bridgehampton Raceway on Long Island competing for the Mecox Trophy in May.  However, a spectacular lunge over two sets of hay bales put him out of the race. He also ran the car on the Floyd Bennett Field in New York City during the last weekend in August, competing in both the Brighton Beach Trophy Race and the Floyd Bennett Cup. He didn’t finish in either.  This car, too, remains lost as of today. 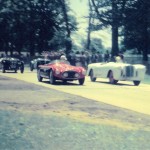 Whatever the relationship between the two, Fuller ended up striking a deal with Singer Motors directly, to assist with the design of their soon to be announced fiberglass Roadster.  There is no question that major elements of his design were taken into consideration during the initial development stages. In fact, one of the 12-15 pre-production versions of the new Singer bore such a striking resemblance to Perry’s car that they were virtually indistinguishable.

Further refinement of the design led to changes of course, but there was no denying the influence Fuller had on Britain’s first fiberglass production car, the Singer SMX, introduced at the London Motor Show in October 1953.

The Vaughan Singer Special and Fuller’s one-off were two of a small, but important handful of Singer cars that played a role in the evolution of the use of fiberglass in the automotive industry. Singer was also connected to industry giant Kjell Qvale and the development of his glass bodied BMC concept car (see https://www.undiscoveredclassics.com/?p=10097). Perhaps even more exciting was the tiny black beauty developed by Kelly Buchanan and driven by Dick Van Laanen which had the potential to knock the Socal racing scene on end – a fascinating story for another time.

Singer lasted thru 1955 when it was taken over by Rootes which owned car marques such as Hillman, Sunbeam, Talbot, and others.  The Singer continued in “name only” as a re-badged Hillman under “Rootes”.  So the golden years of Singers racing in America – with or without fiberglass bodies – was 1949-1955.

Thanks again to Peter McKercher for taking the time to put this wonderfully detailed article together for our “Forgotten Fiberglass” group of enthusiasts. 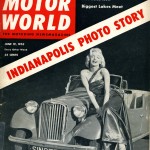 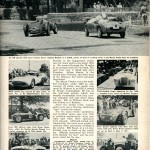 Here’s A Straight On Shot Of Fuller’s Car At The Starting Line Being Driven By Bill Vaughan At Bridgehampton, New York in 1953. 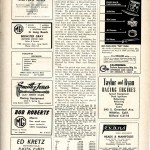 This Short Article Appeared in Jet Magazine on April 23rd, 1953. It Discussed The Recent Showing Of The Car By Perry Fuller In New York City. 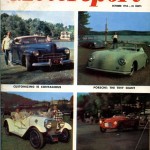 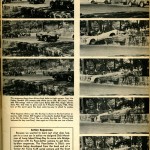 Here Vaughan Is Shown Just Leaving The Race Course – Not A Fun Thing For Any Driver – Particularly In The Golden Age of Racing With Limited Safety Equipment.

Up And Into The Hay Bales Goes Bill Vaughan – This Series Of Pictures of Vaughan at Bridgehampton, New York Appeared In Motorsport Magazine, October 1953. 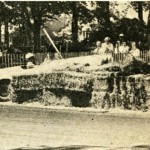 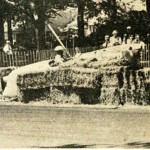 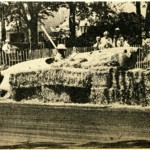 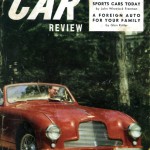 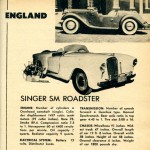 Here’s A Nice Picture of Perry Fuller’s 1953 Singer Special – We Believe This Was Taken At Vaughan Motors in New York City. 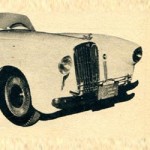