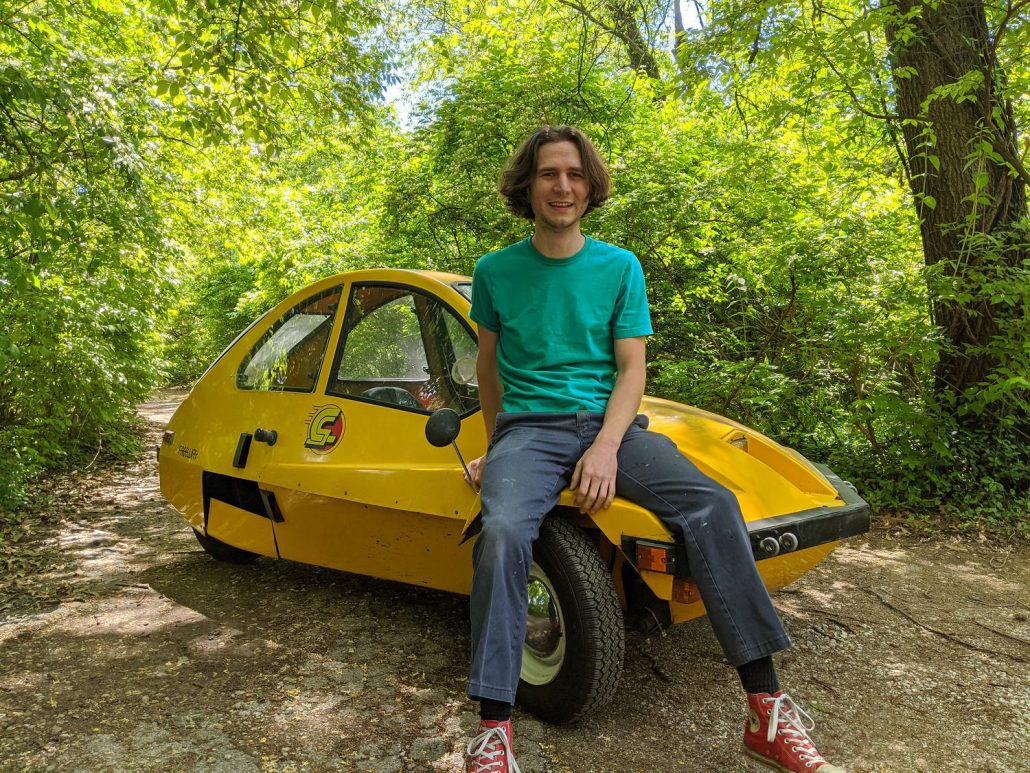 Kyle Feller and his HMV Freeway

Hey all, inspired by the good weather and the sudden abundance of spare time with the current pandemic situation, I decided to break out my 1981 HMV (High Mileage Vehicles) Freeway. Now that I’ve been out driving it around, Geoff suggested I write an article.

Small cars are kinda my thing. I’ve been going to microcar meets since I was in grade school, and have owned and worked on a wide variety of strange vehicles, most of them small. It seems that when designing small cars, builders are much more likely to think outside the box in both engineering and style. This wide range of creative engineering solutions and wild industrial design is what kept me coming back to the small stuff.

The first of these Microcars to find a home in my garage was a 1974 Sebring-Vanguard Citicar. I had loads of fun with this car, regularly driving it to school while finding all the secret outlets around town for ‘borrowing’ a little juice. While I love its 1970s oil crisis vibe, living in a city was the perfect thing for going to school and quick zips around town. The downside was that it is little more than a glorified golf cart in both speed and range. I wanted something I could take to Microcar rallies and go on a 40 mile long run while keeping up with those zippy Messerschmitts. 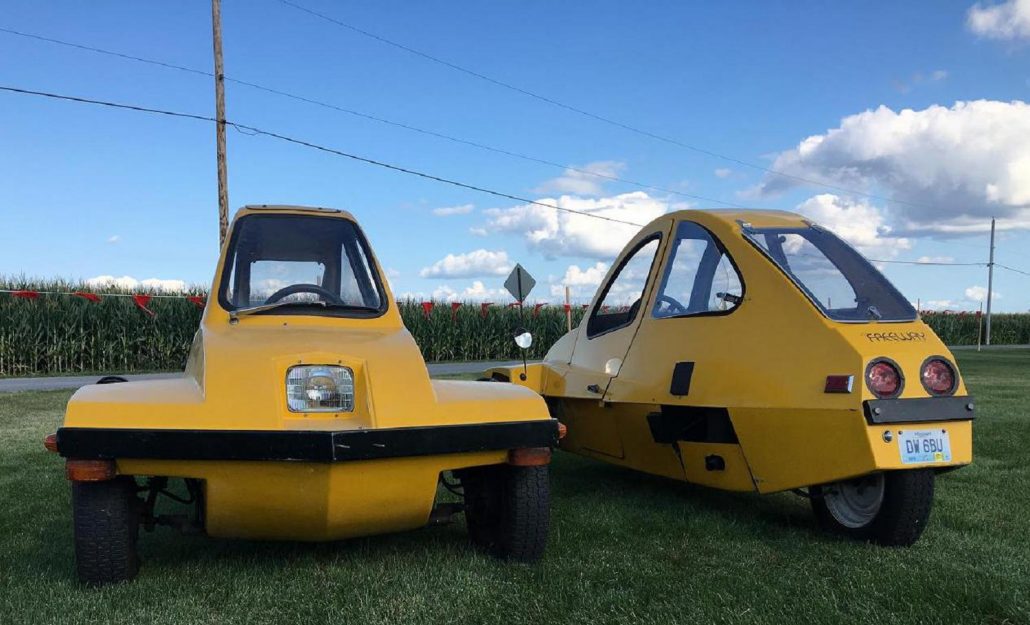 The story of the company behind the Freeway, High Mileage Vehicles, is as interesting as the vehicle’s styling. In 1970, driven to beat Detroit on fuel economy, Dave Edmonson began work on building the first ‘Free-way’ in his garage. In 1977 he entered his car into an SAE conducted fuel efficiency competition. Clobbering the other teams, getting 88.3 MPG in his completely ground-up, home built design.

Funding offers soon followed and were secured by 1979, but producing and selling a new car from scratch on a budget isn’t easy. By June of 1981 – after producing an incredible 700 gas and a few electric Freeways – they filed for bankruptcy. The company was bought and 15 more cars, tweaked to be a two seat convertible model, were built in 1984, sold under the Minikin marque. If you would like to know more about the history of the Freeway, check out the old website of the Freeway club. Now thankfully preserved by Hemmings http://clubs.hemmings.com/hmvfreeway/ 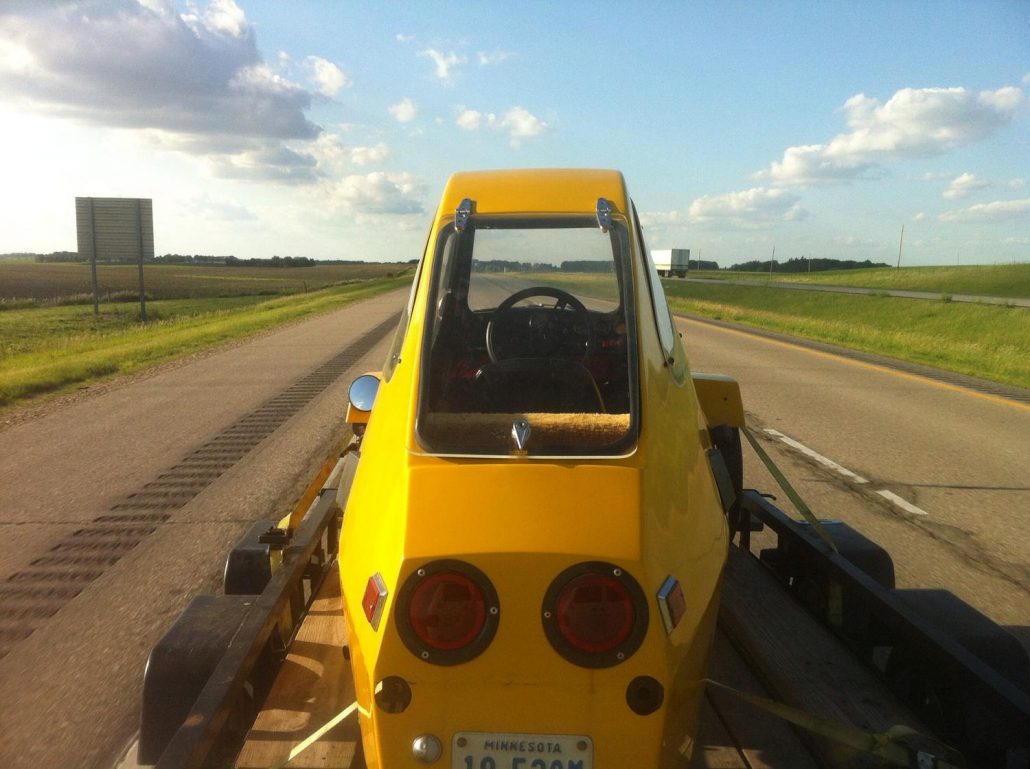 I’m not sure exactly when I started my search, but once I started looking it was only a matter of weeks before I found one. The car I found was located in St. Paul Minnesota, not far from the original HMV factory in Burnsville. Based on the  “Owners List” given to me with my car, I suspect most Freeways were sold fairly close to home. The car I found was a survivor, a little shabby, stored outside for years, but completely original and unmolested. The guy I bought it from was the second owner, and had bought it from an old neighbor. So at some point it was pushed from the first owner’s driveway to the second. There it sat for many years until I came across it on Craigslist.

I brought it home and immediately ripped out the 35 year old mouse chewed shag carpet. Next I removed the fiberglass shell in order to de-rust, and paint the frame. The dash on the Freeway is attached to this top shell making it a pain to test anything, or drive it, with the body removed. To remedy this I carefully cut and liberated the dash from the top half and mounted it to the frame. The engine came to life with little effort and after sorting the brake system I had a high speed street legal go-kart. After that I buffed out and reinstalled the upper body shell. A new upgraded carpet interior and some minor fit and finish stuff and I had a good showable car. 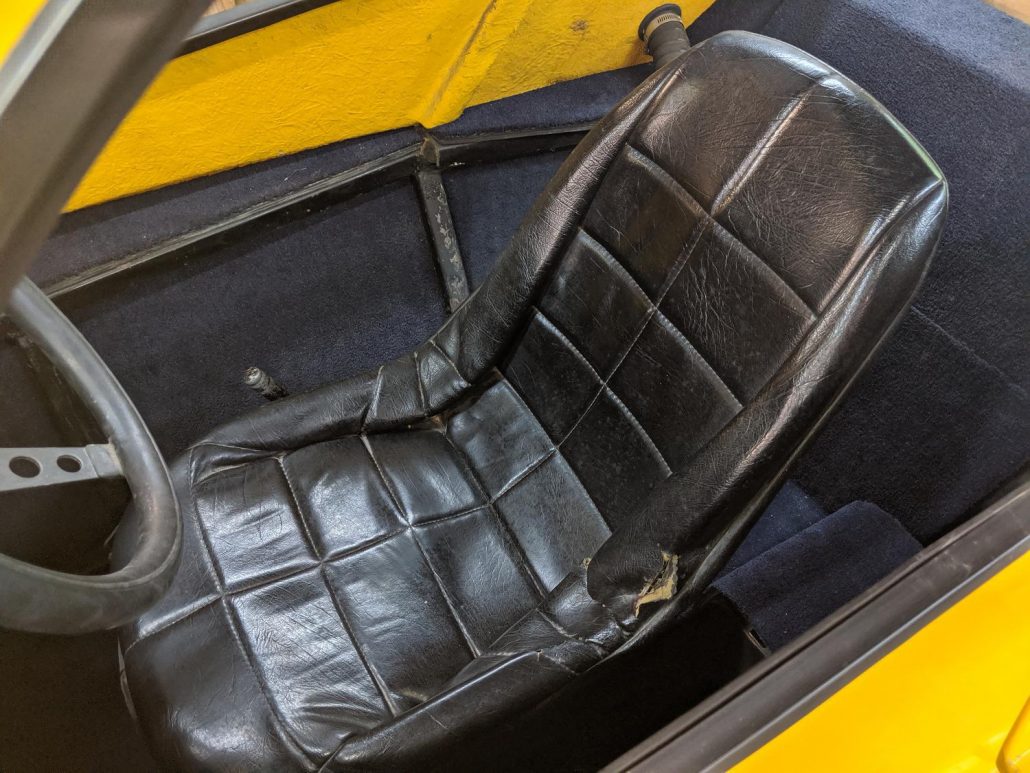 The Freeway is powered by a mighty 350cc 12HP Tecumseh ‘lawnmower’ engine, mated to a Comet Duster CVT automatic transmission. This gives it a top speed of around 40 mph and the acceleration of a diesel locomotive. While this might not sound like a compelling driveline, aside from sipping fuel at 100 miles per gallon, it is dead simple!

All parts were commonly available, and the whole thing could be serviced at your local lawnmower shop – or more likely in Minnesota a snowmobile shop! No need for an expensive dealer, parts, and service network. The front end is equally simple, using many off-the-shelf parts, but attached to a custom engineered steering and suspension system. This gives the Freeway a bit of a bump-steer situation and thus a quiet ‘exhilarating’ driving experience. There is a kit to fix this, but I enjoy the charm and thrill of driving the original thing. 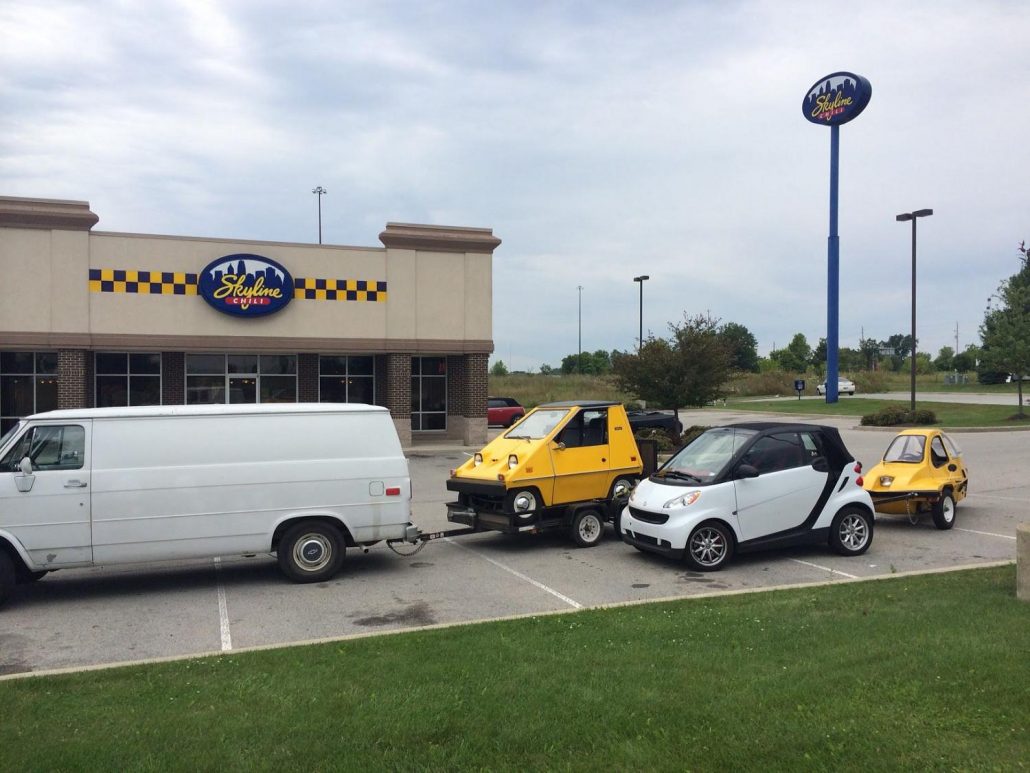 Kyle’s off to a show pulling his HMV Freeway with his Smartcar. His Citicar was being towed by another friend, and of course they stopped at my favorite restaurant – Skyline Chili. Yum!

It’s at this point in the story I have to mention. I was led to believe (or maybe I just wanted to) that this vehicle with its original engine had the capability of cruising down the freeway at 60 mph. This isn’t true, but it sent me on a wild goose chase to figure out what was “broken” with my car.  Long story short.  I got fed up, and stuck an 850cc Honda industrial engine in the back. I took extreme care to make no modifications I couldn’t undo. The only way you could tell it was modified was that it had slightly less room behind the driver seat, and of course the sound it made. With this engine I was able to get it up to a pants wetting 90 mph. 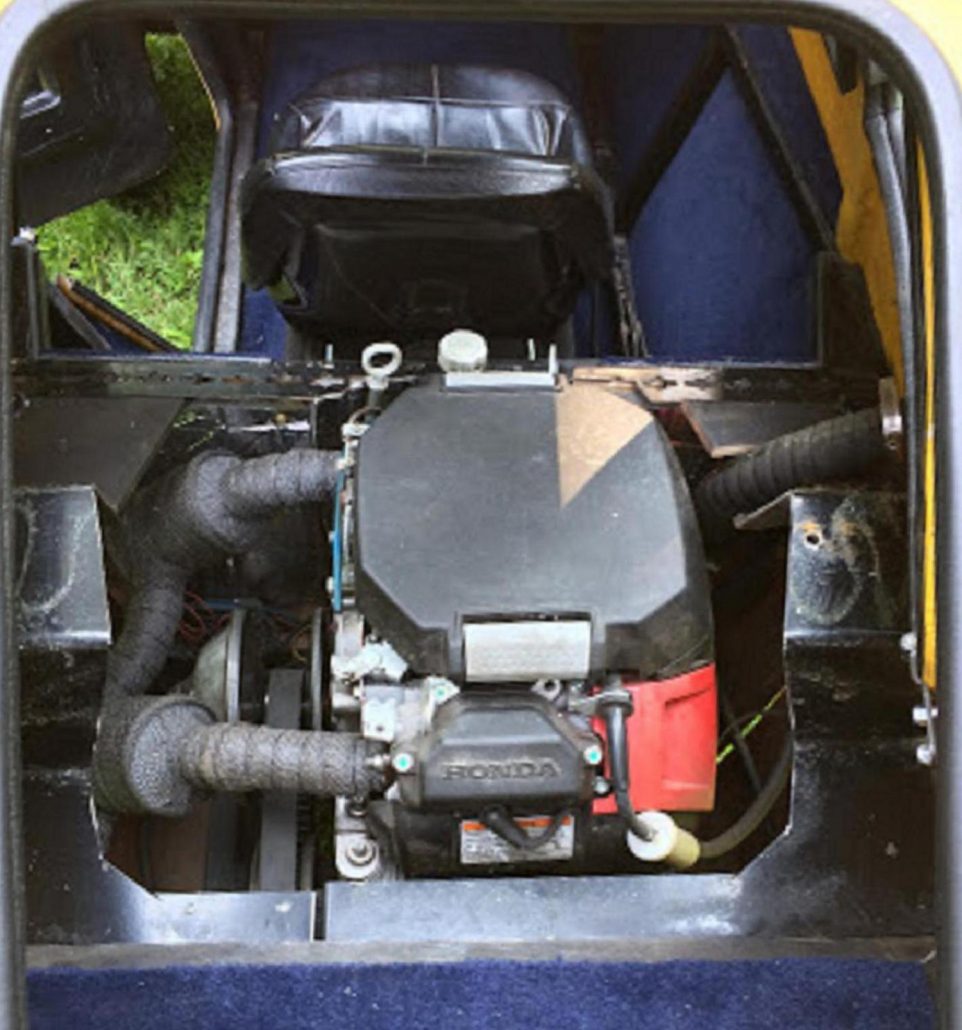 This was wrong. It was too loud, too hot, and too fast. I realized that I never just accepted the car for what it was, a vanguard of the ‘high mileage vehicle’ a piece of history and a slow little microcar. So one night after a few beers in the garage with my friend Oscar, I walked over to my Freeway and start unbolting.

A few hours later everything I had done to ‘Honda-ize’ it was ripped off and pulled out. Because of the care I took when I modified it, only a few weekends of work were needed to put it back completely original, no one aware of the secret double life as a hotrod it shortly lived. The one panel I cut behind the seat to allow the engine to poke through the top actually turned out to be the exact shape of the “engine hatch” DIY upgrade suggested by ‘Jerry’s Freeway Manual’ (published contemporary to the car) 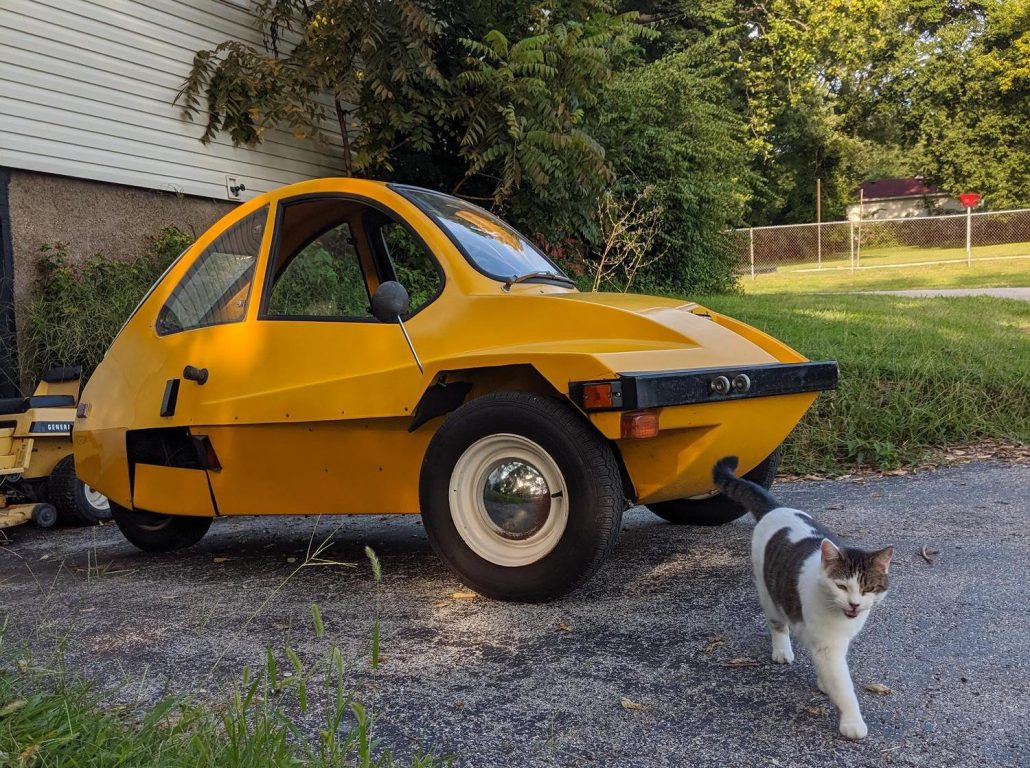 Kyle’s HMV Freeway at his home in St. Louis with his cat “Mouse” standing guard.

I took it to several microcar meets, and once even pulled to Ohio behind my Smart car. I would drive it around town on occasion but I never really got it to the point where it was a trustworthy vehicle. So I mainly enjoyed it for its artistic and historic value. Last year I got it up and running for a friend of mine to review, who has an automotive Youtube channel. I drove it a little after that but lost interest and the weather got cold so I put it away and kinda forgot about it, Until now.

I got the Freeway out of my basement to move to my shop, just to make room. I had also forgotten I had fixed it so I was pleasantly surprised when it ran perfectly! I decided to keep driving it between my house and my workshop. Here I am 200 miles later, and I think I finally have a reliable vehicle. Short errands, trips across town, all done in the Freeway without issue. Being able to enjoy it in this way has given me a renewed love for the car. Maybe no longer is it just a curiosity of the past on display in my basement, its transportation? 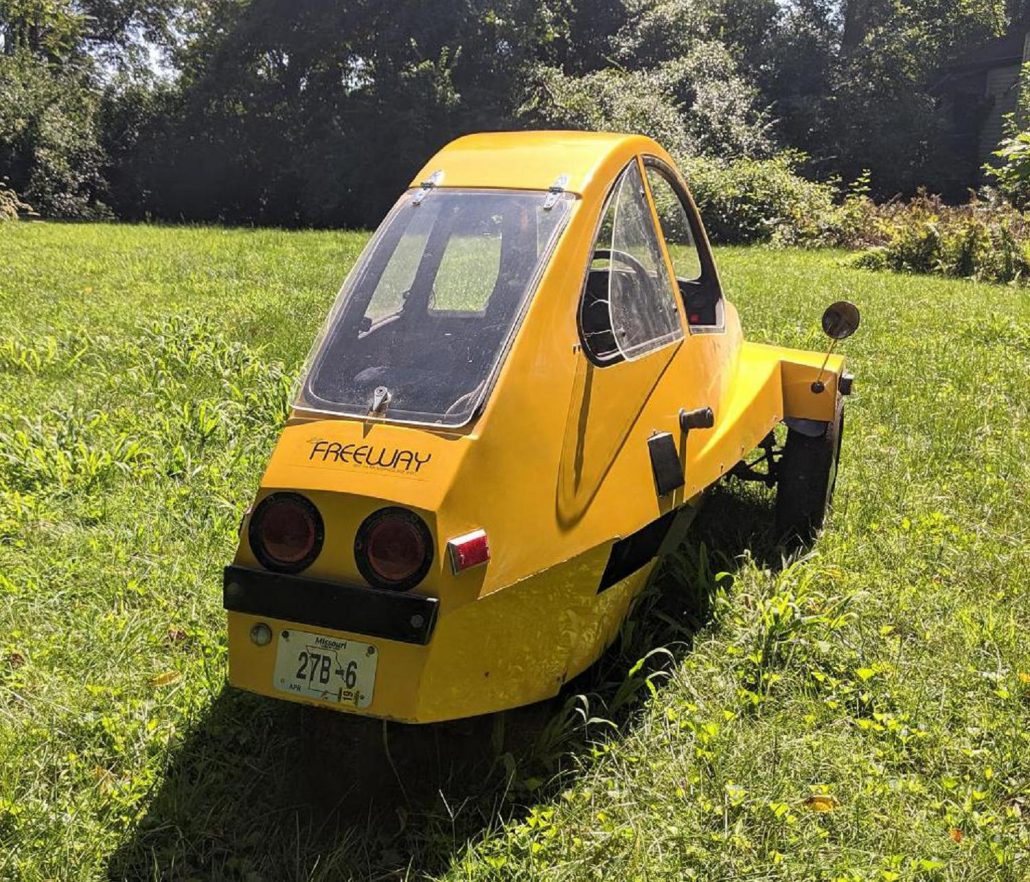 Another “winner” of a story for Kyle and thanks for sharing this story about a car I’ve seen but knew little about.  Cool car Kyle (maybe that should be your name).  And for those of you interested in obtaining a HMV Freeway, it sounds like there were plenty built so you should be able to find one quite easily.  A very neat car 🙂