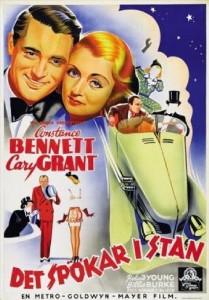 Many of you know that I have long been fascinated with the cars that influenced the design of the later fiberglass sports cars of the 50’s.  To know the subject you are studying – you have to know its heritage.  And Rick D’Louhy and I are leaving no fiberglass matt (or custom bodied metal sports car panel) unturned.

Today’s story is from Glenn Brummer and is about a car known as the “Topper Sport Custom.”  And it has an interesting history, as you’ll read about below.  But I have always been interested in this car because of it appearance in the 40’s and ’50s custom car books of Dan Post.

Dan Post was the first to document the custom car movement in word and deed starting in 1944.  It’s an amazing story of how he captured the beginning of this movement in Southern California during the War years – and by mail – corresponding with builders here in America and GIs in foreign lands.

Dan Post was a visionary when it came to understanding the excitement and importance of what was going on in the car hobby – even while he was in the military.  For those of you interested in the full story of Dan Posts’s quest to document customizing in postwar America, you can read an excellent article by Harold Pace that appeared in Rodders Journal Magazine issue #45 in 2009.

Dan Post recognized these cars were special – and the people who built them – starting in ’44.  By ’47 he had captured what is now called the “Sport Custom Movement” which lead to the more elegant and stylish American hand-crafted sports cars from the late ‘40s and beyond.  And interestingly, he used the car from the ’37 “Topper” movie to herald this new form of design.

Let’s see what Dan Post had to say about Sport Custom Cars as well as the Topper custom car in his ’49 “Blue Book of Custom Restyling.”  And while you’re reading this, keep in mind this particular book was originally penned in by Dan in ’47 in a book titled “California Custom Car Photo Album”  – just two years after the war and many years before the custom car movement took fire across America.

Dan Post led the pack in his ability to capture the thoughts, beliefs, and results of what was going to be a defining moment in the golden years of the custom car era in America. 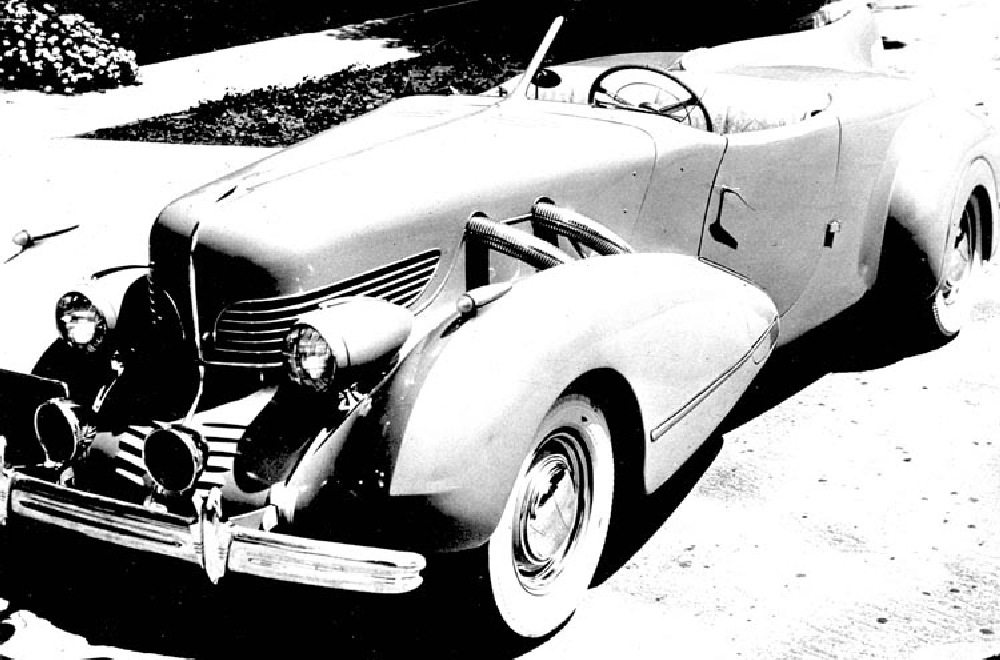 Blue Book of Custom Restyling (1949)
Sport-Custom Cars: How They Came To Be
By Dan Post, Arcadia, California

With its open-car climate ‘round the calendar, Southern California, capital of the motion picture industry, hub of top midget racing, and playground for nearly every sport, has been the natural nursery for the sport-custom car.

Through coachmakers all over the country have been kept busy since the industry’s infancy with orders for one-of-a-kind formal bodies, enclosures for touring cars, and an occasional customizing treatment on a roadster, or the once-nippy “speedster,” not until the thirties did the sports custom car come into its own in the form it is known today.

Support of the new trend came two-fold from Hollywood.  While movie scripts like “The Young In Heart” and “Topper” called for custom cars, many of the stars themselves ordered specially-styled models.

In 1936, prominent Pasadena coachbuilder Maurice Schwartz, constructed the “Topper” car for Hal Roach on a Buick chassis, following a design by Anthony Garrity of Hollywood.  Many theater-goers across the country came out of “Topper” remembering little more than the dream speedster.

At a stroke, this stimulus spawned a fresh, car-design-conscious generation – and gave youth to the infant custom-sport industry.

Note:  Dan Post published pictures and a shortened version of the same information above in his ’47 book “Dan Post’s California Custom Car Photo Album,” but the information and pictures shown are more comprehensive in his ’49 book shared above.

And with that, let’s review Glenn’s article today about the “1937 Topper Sport Custom.” 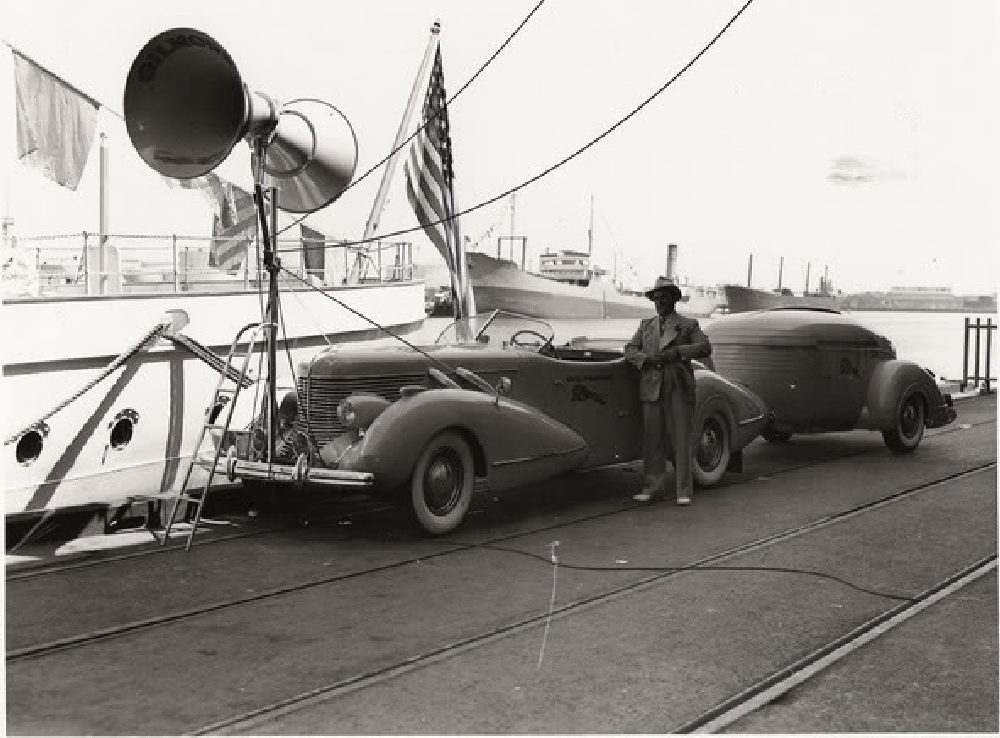 This is a story about an early stylish, luxurious, sporty, custom-built car that was originally built for the 1937 black and white motion picture film “Topper”.  The movie was first shown in theatres on July 16, 1937 and starred Cary Grant, as George Kerby; Constance Bennett, as Marion Kerby and Rowland Young played the part of Cosmo Topper.

The 97 minute film was produced by Hal Roach Studios and distributed by Metro-Goldwyn-Mayer.  A special car was required for the movie because in a number of scenes, the car appears to be driven by a ghost, so the “Topper” car had to be fitted with special controls which included a second hidden steering wheel which could be operated by a stuntman who was out of sight.

Bohman & Schwartz fabricated the ‘Buck Rogers’ style body which included a rear center fin, fake stainless steel exhaust pipes protruding from both sides of the hood, two doors, hinged at the rear with one concealed and one exposed hinge on each, free standing headlamps, shapely teardrop front and rear fenders with 4” wide semi-circular fender skirts at the rear.

A really sporty windshield was devised from two pieces of flat glass, supported only at the cowl and at the center with a vertical chrome plated support.  If you have not seen the original version of the motion picture “Topper”, you will want to add it to your “must see” list – if for no other reason than just to see this spectacular car!

In 1939, Hal Roach Studios sold the “Topper” car to the Gilmore Oil Company.  They saw potential for use in advertising and promotion of their Red Lion brand of gasoline.  They sent the car back to Bohman & Schwartz to have a new grille fabricated from horizontal chrome bars to the full height of the radiator in order to aid the cooling when the car was driven at slow speeds in parades and special events.

It was repainted in a cream Gilmore color; Red Lion logos added to both doors; a very large sound system was added as well as a trailer hitch to accommodate a newly designed and custom built trailer which housed a live lion cub as a part of their promotions.  Later, a second trailer was designed by ‘Jack’ Gerrity and built by B & S to house additional electrical and sound equipment that was required for certain events.

In 1940, Socony-Vacuum (Mobil Oil) purchased the Gilmore Oil Company of California and by about 1948, Socony-Vacuum decided that it was time to update the old Buick and asked famed designer, W. Everett Miller, to come up with a fresh design for the front of the car.  He made several proposals and ‘Mobil’ chose the one which featured a series on concentric rings above a horizontal rectangular opening with vertical chrome strips. 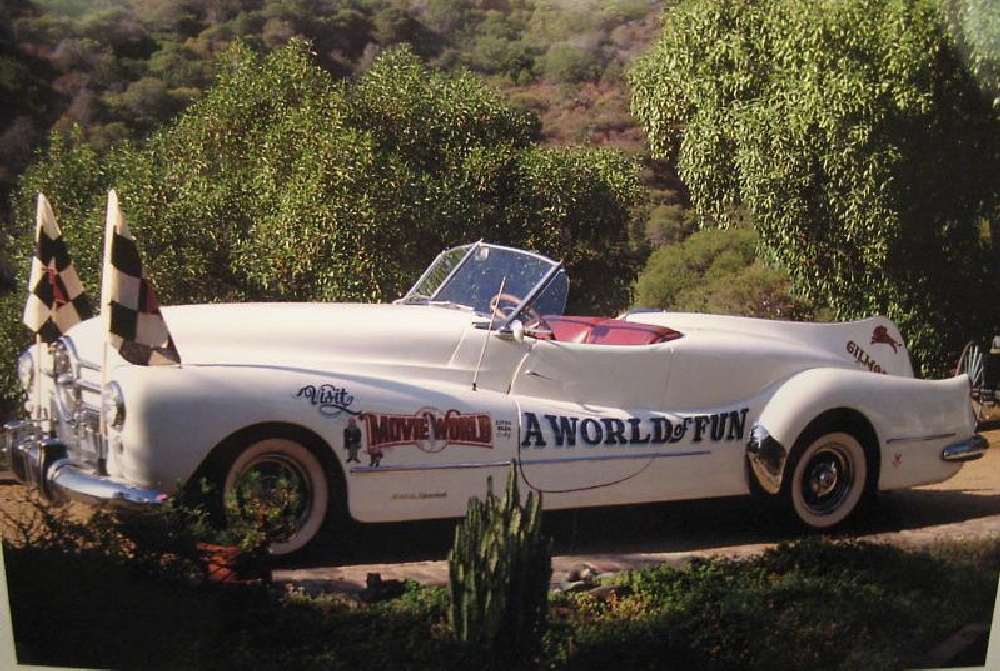 Chris Bohman, formerly of Bohman & Schwartz, was commissioned to do the modifications which included new upholstery, a new windshield frame and convertible top, outside rear-view mirrors, Cadillac hubcaps with Pegasus ‘Flying Horse’ logo centers, heavy Oldsmobile bumpers and new white paint with Pegasus logos on the doors.  The car was used for numerous events including the Mobilgas Economy Runs.

By 1954, the eighteen year old Buick chassis had covered an estimated 300,000 miles, so Mobil contracted with Bohman & Son to revamp the ‘Topper’ car once again.  A new Imperial Newport was purchased (235 H.P. Hemi engine, 131.5” wheelbase) and sent to their shop.  The Imperial body was removed and the chassis / engine combo was installed under the ‘Topper’ body with some modifications to the steering and frame.  The front fenders were blended into the body and the rear fenders received a Cadillac fin / taillight treatment.

Shortly after the final re-styling, Mobil sold the car to its long time retiring driver, Leon Wilson who only retained it for a short period of time before selling it to California car collector, George Warner.  Upon Warner’s death, his widow sold the car to Jim Brucker who owned the Movie World Museum, located near Disneyland.  It was on display there until the museum closed in the late 70’s.  The car remained in the Brucker collection until May 13, 2006 when it was sold by RM Auctions.  So, where is the car today? 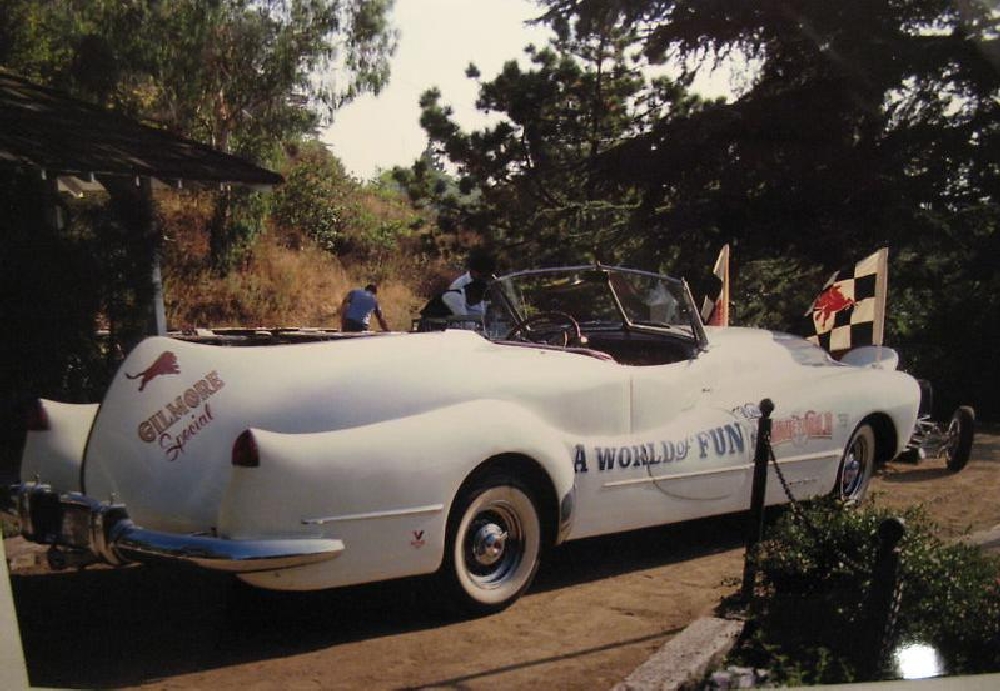 Great story Glenn, and thanks for sharing the many iterations of the design of this car – did I count 4 or 5 major redesigns?  Wow!

The Topper Sport Custom was last at the Petersen Automotive Museum in Los Angeles, California around 2010, at which time it was returned to its owner – where it remains safe and sound today. 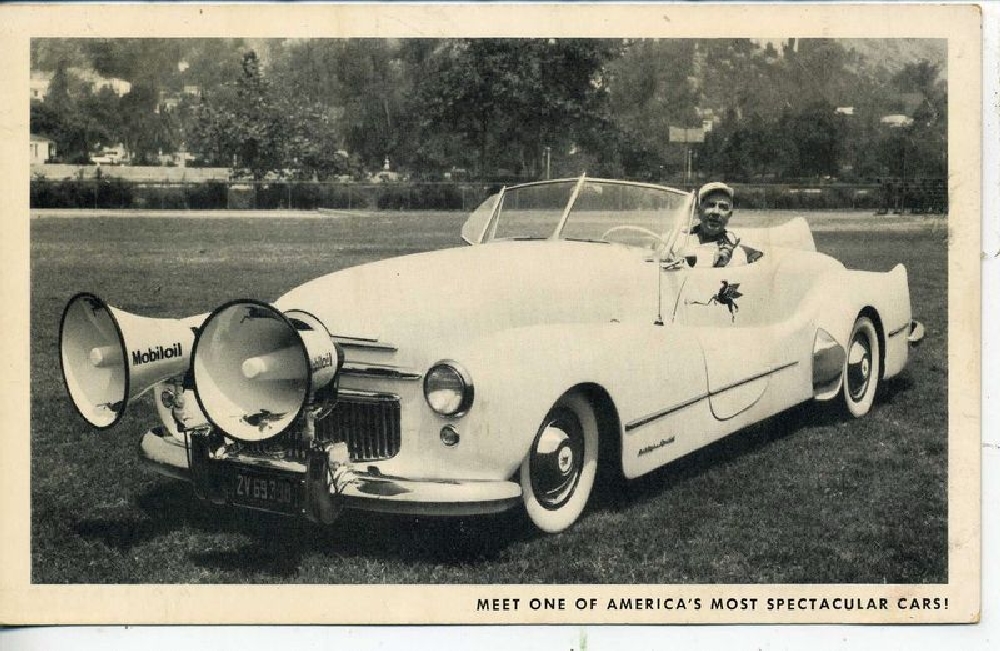 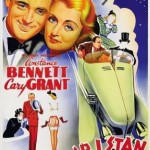 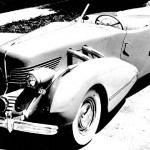 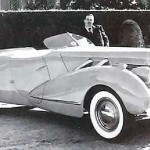 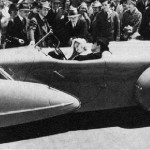 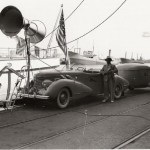 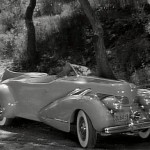 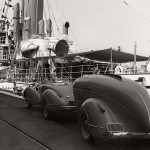 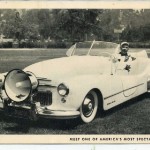 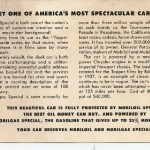 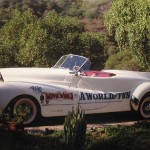 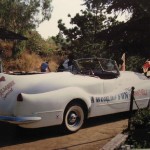 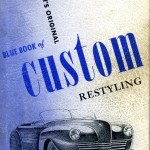 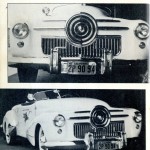 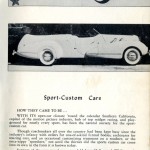 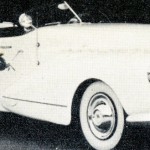 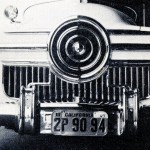 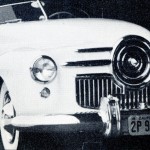 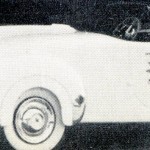 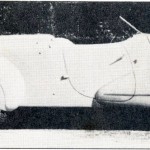 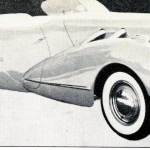 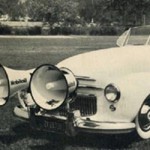