As a source of inspiration, one of the first books I read when we began our quest to find lost and forgotten cars of yore was Tom Cotter’s “Cobra in the Barn.”  This is a book chocked full of stories on how people found lost and unusual cars and their often triumphant return to the light of day for people to admire and enjoy.

Who can’t love stories like that?  And surprisingly, it led to one of my first “finds” that was already “found.”  That is, I fell hard for the story of the “Moon Transporter,” and through that story developed a great friendship with its owner, Jim Degnan, and this eventually led to the acquisition of this same vehicle.

So one of my first “barn finds” was in Tom Cotter’s “barn find” book, which means how could Tom and I not possibly become great friends – which I’m pleased to say we are. (I love double-negatives…)

So last week, Tom mentioned he was coming down to Florida on a business trip and asked if he could stop by.  “Absolutely,” I replied and went keenly back to work.  Work, that is, on planning a fun visit for Tom.  Rick and I would soon get busy.

It just so happens that we’re in the process of moving some of our cars from a small storage building to a larger workshop.  I’m not sure how this happened, but when all was done, the new workshop now held just 3 of my cars, and my buddies cars populated the floor space throughout.  I have to rectify that situation soon, but the end result is that I now have eight cars in front of my house (which includes my daily driver – a Chevy Suburban).  And…five or so cars behind the fence.

So before Tom got to my house this past weekend, we covered all the cars up and wanted to surprise Tom.  Could he guess what cars lurked under said covers?

Rick D’Louhy, my fiber partner in crime, came over for the day to spend time with Tom as well, so Rick and I set to work covering all the cars before he got there.  By the way…don’t come to Tampa, Florida for the next week or so expecting to buy car covers – at least on my side of town.

The plan was hatched, Rick and I set into action, completed our work and waited for Tom to arrive. 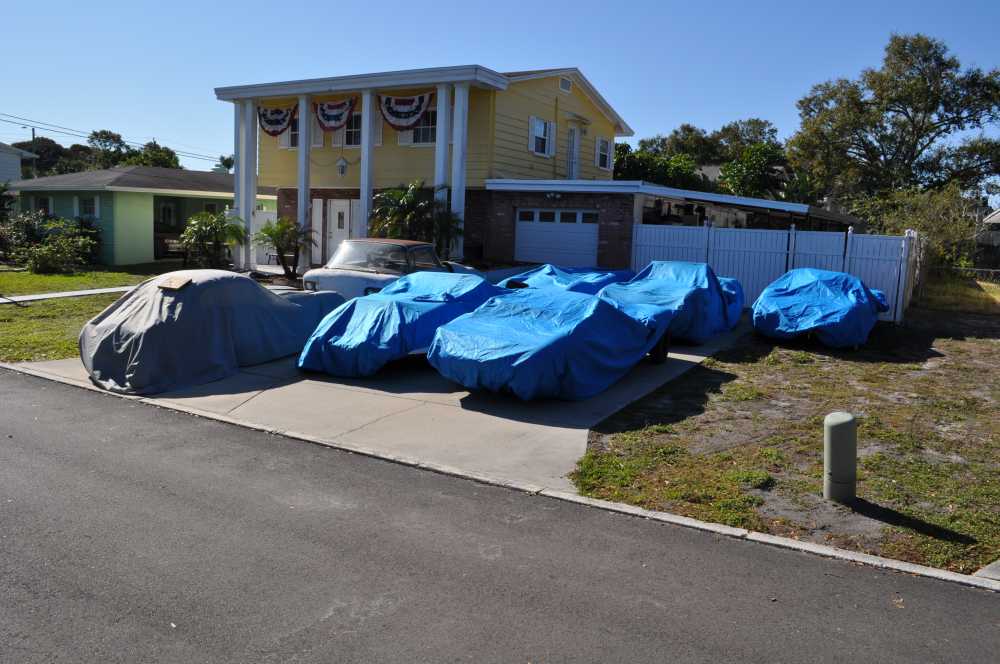 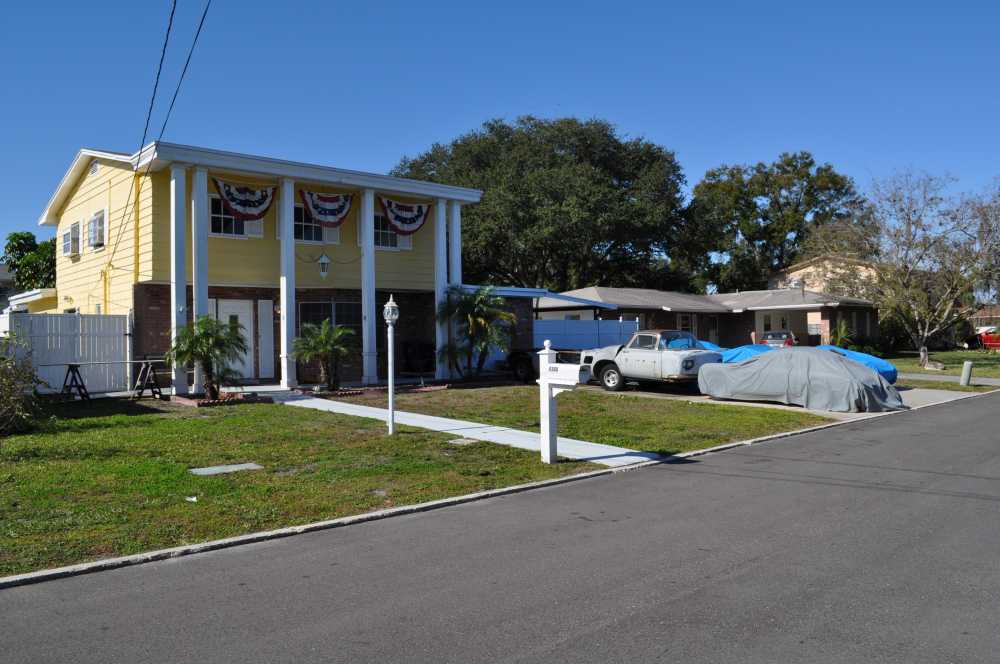 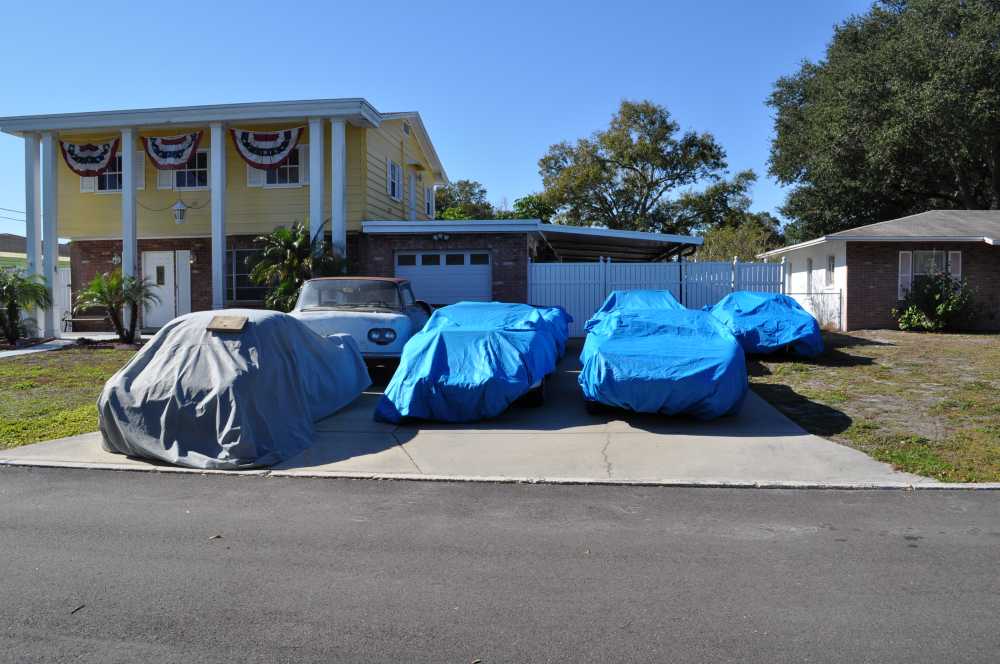 Rick and I were successful in covering 6 of the 7 cars out front.  It looked like my cars were bundled up for the winter.  I am trying to be discrete with so many cars in front of my house…this way the neighbors won’t notice as much.

The 1st car we showed Tom was none other than the Moon Transporter.  Given its size we figured Tom would guess what it was anyway.  Below are photos of Tom with Rick and then myself: 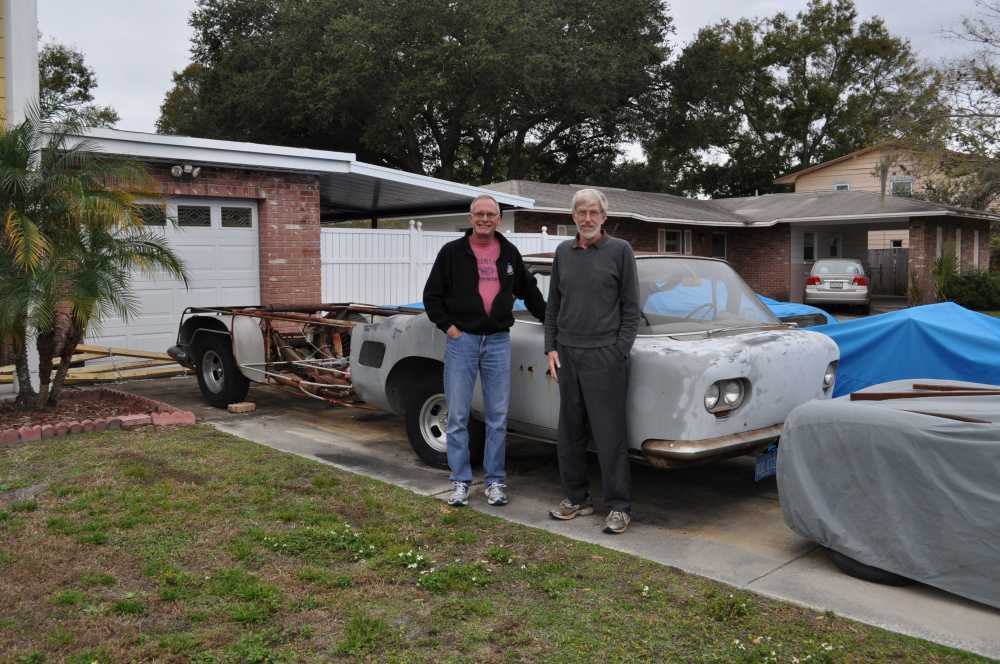 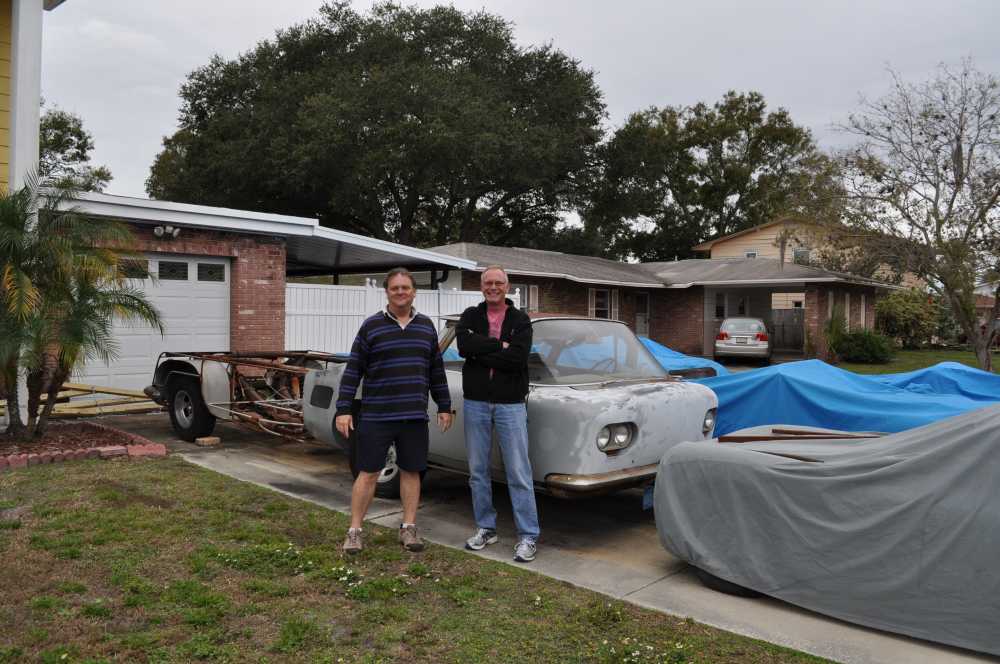 We gave Tom lots of hints on what this next car was going to be…. 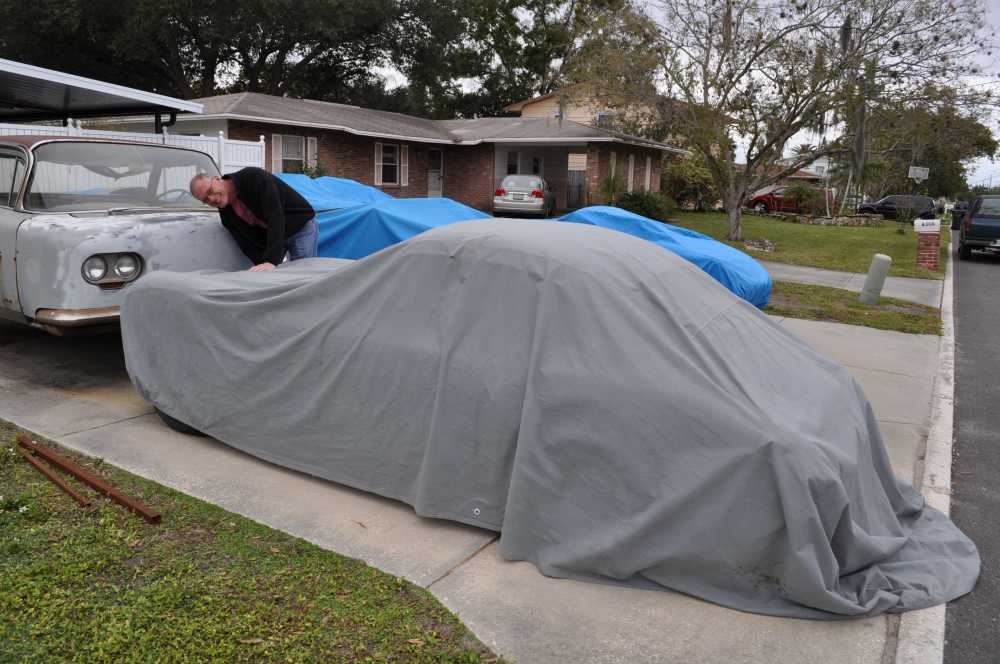 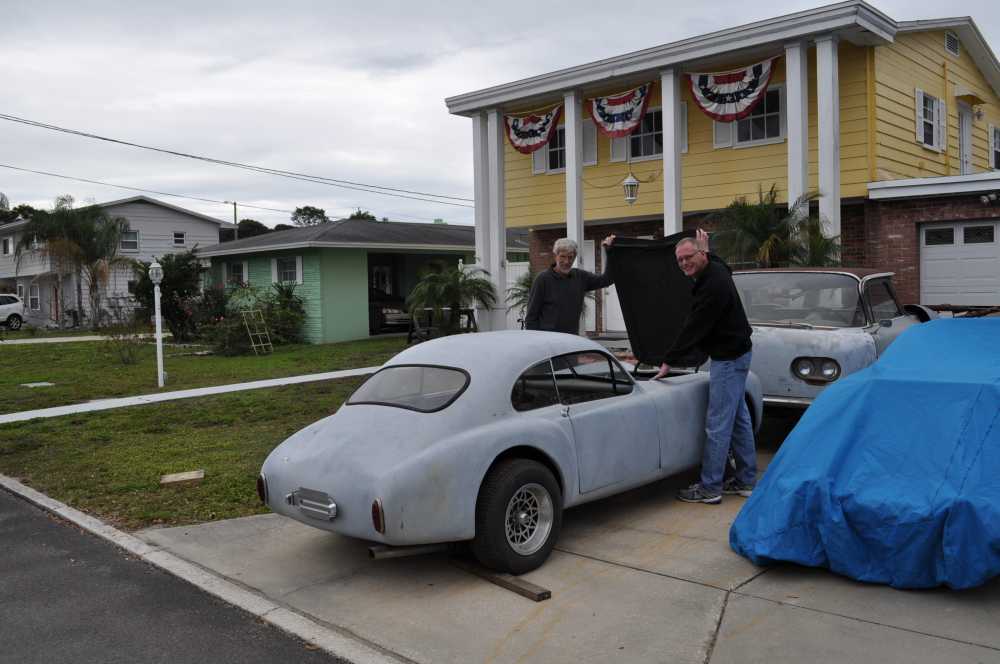 Here’s a car we acquired several years ago 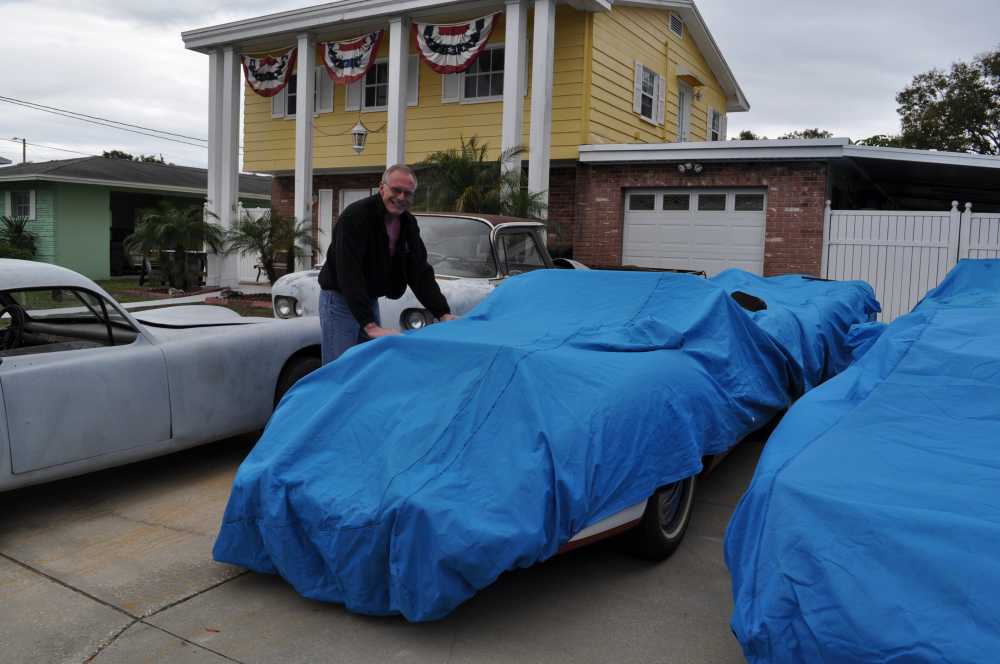 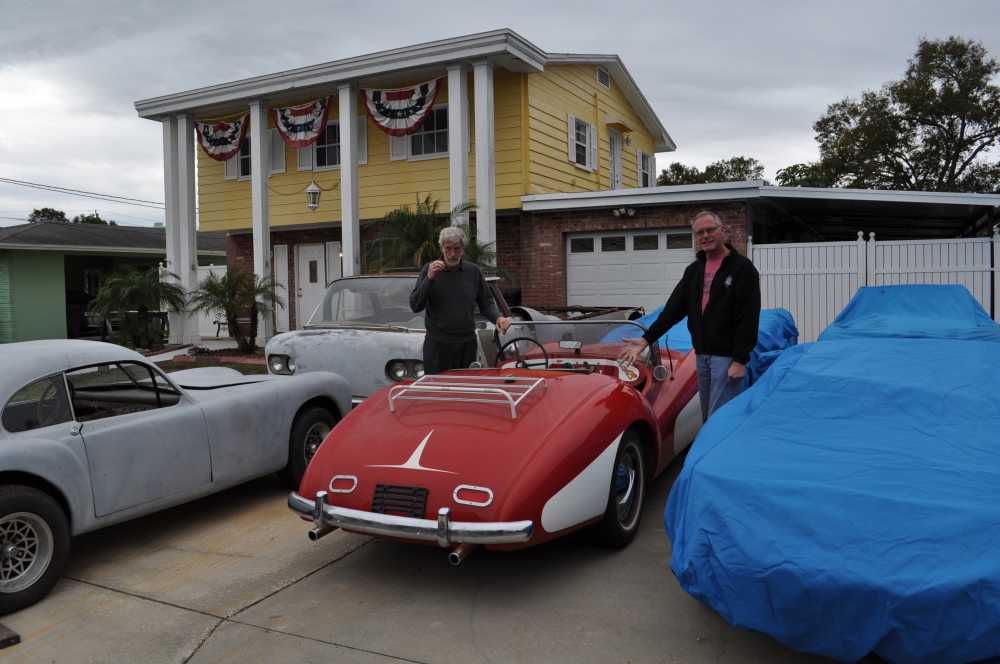 One of my favorite cars – a car modeled after the Cunningham C1: 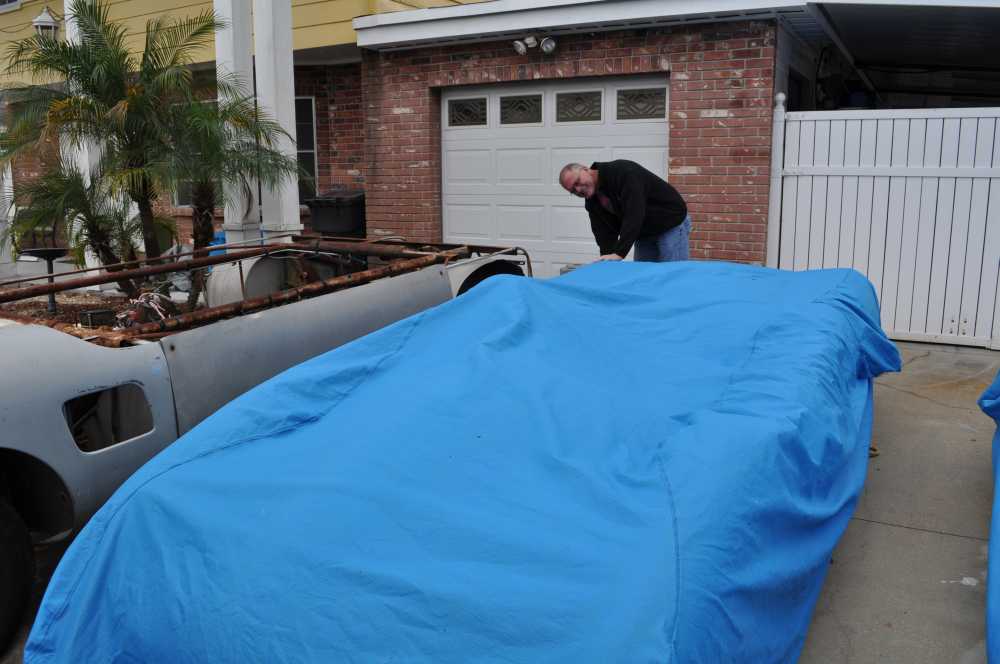 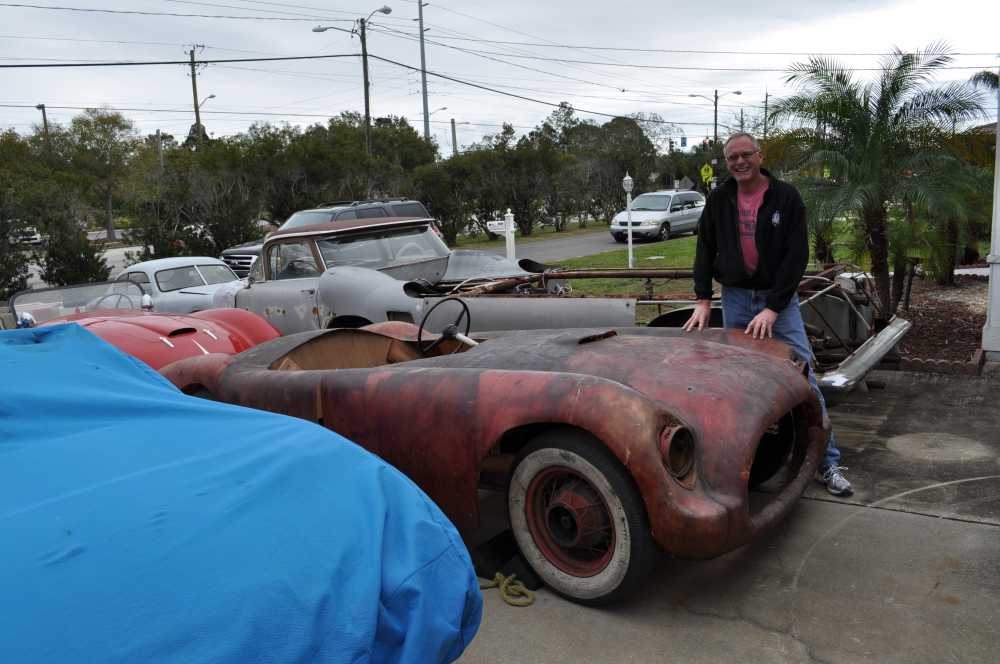 Harold Pace first wrote about this car in the mid 1990s in Kit Car Magazine.  Later, I met Elwood who lived near my home in Tampa, Florida.  And…a few years after that we found his car in Texas.  It will be a great car when finally restored. 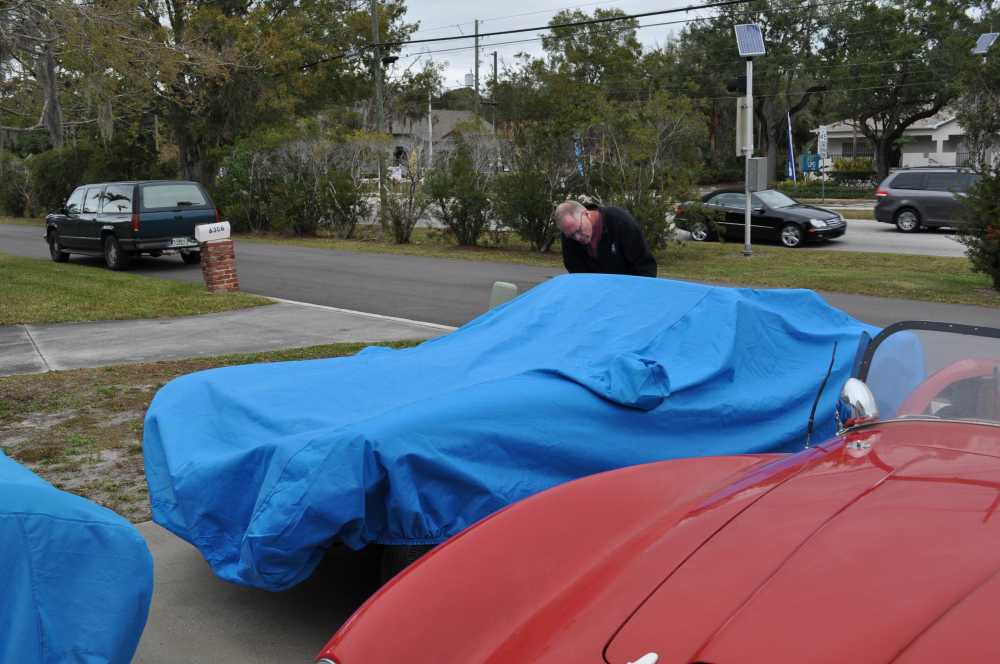 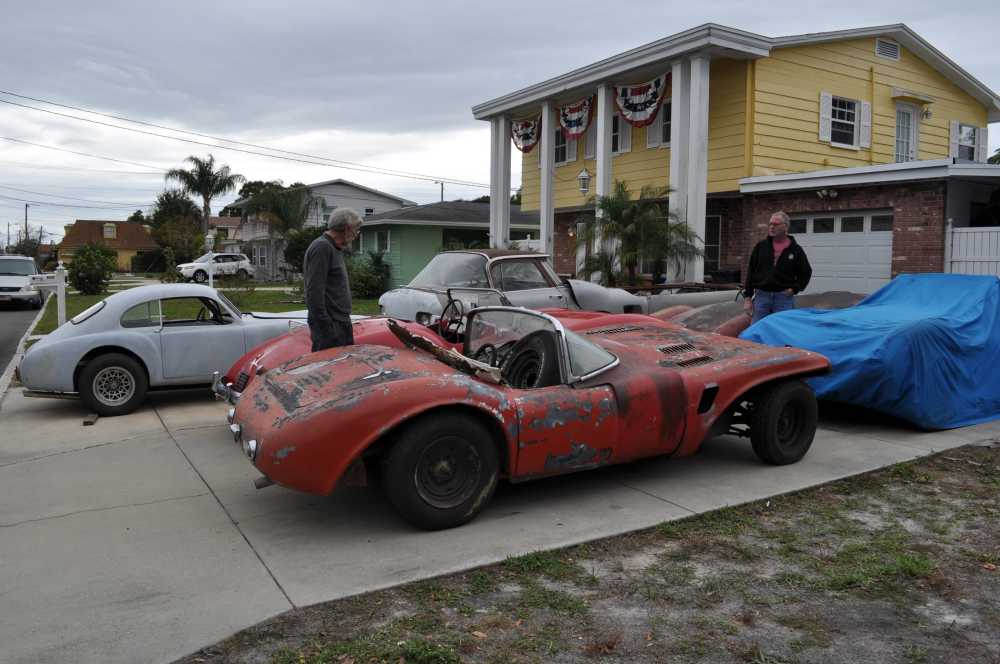 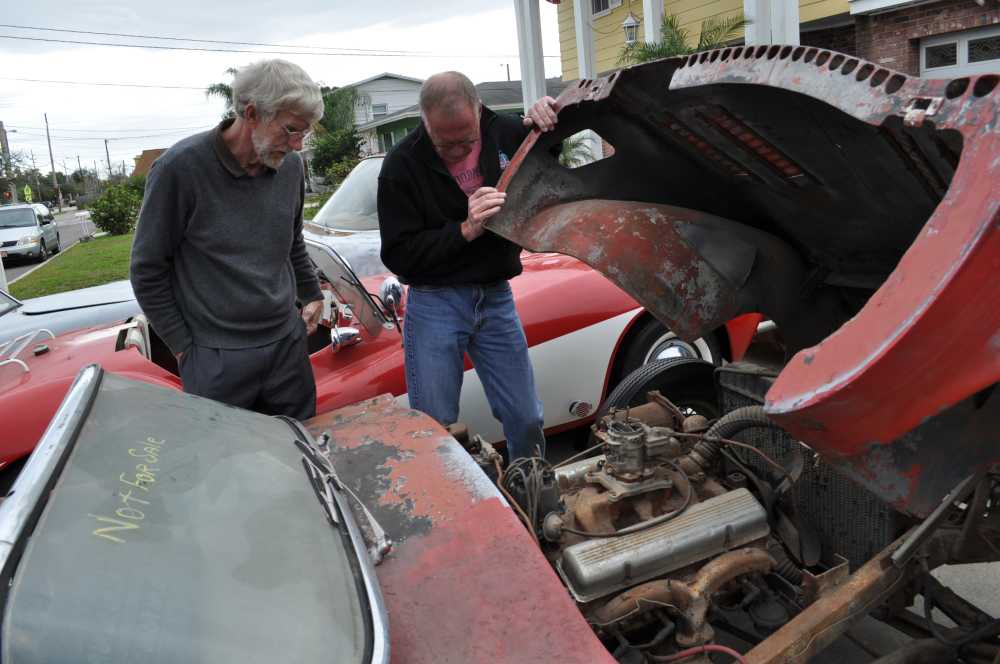 Round tube chassis, original hemi power (now Olds), what a “build” this was back in the day.  Slated to go intro restoration shortly, new owner Howard Levy of California will be seeing his car finished later this year. 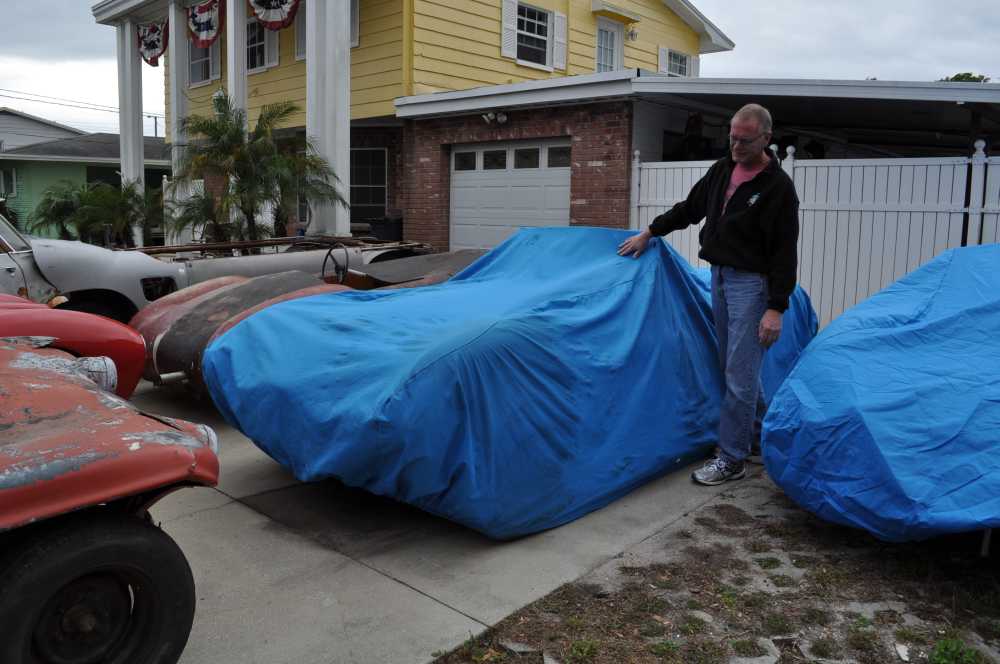 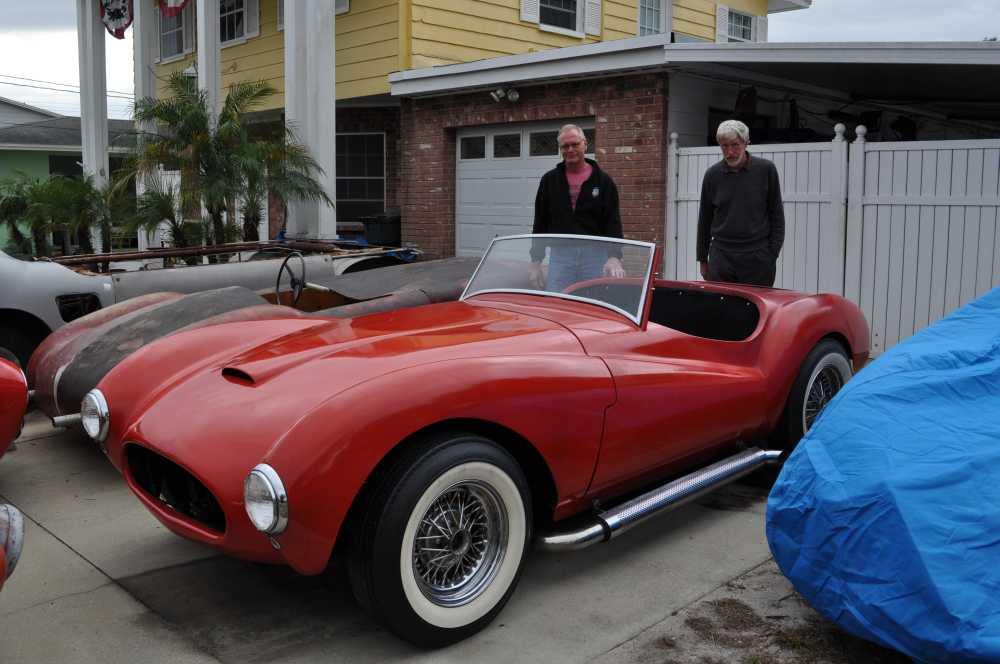 Our first acquired Bangert Manta Ray – a car found by Ray Palicki several years back in the Detroit area. 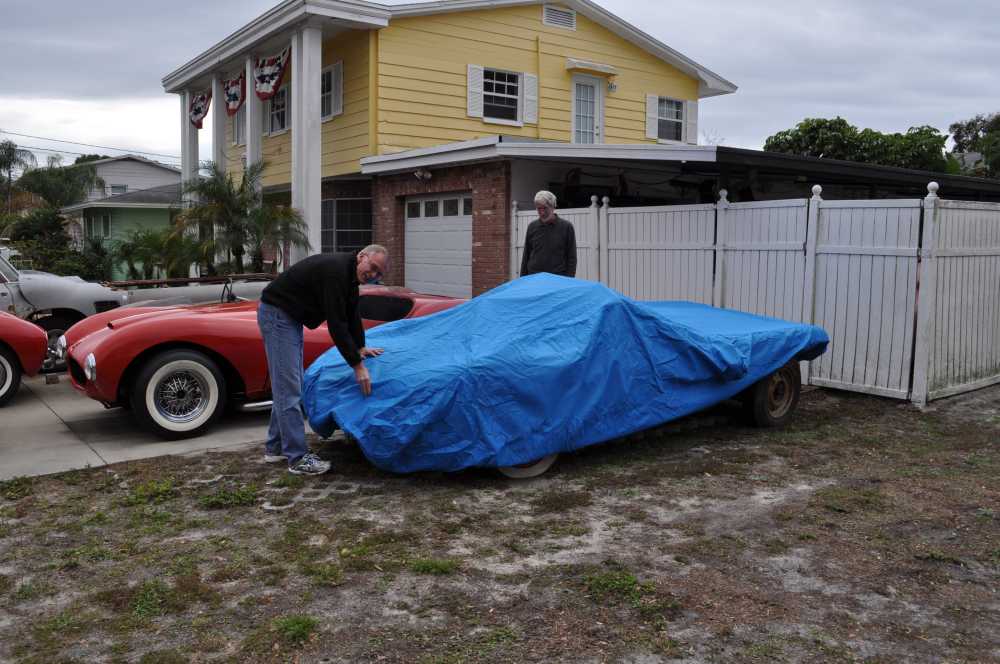 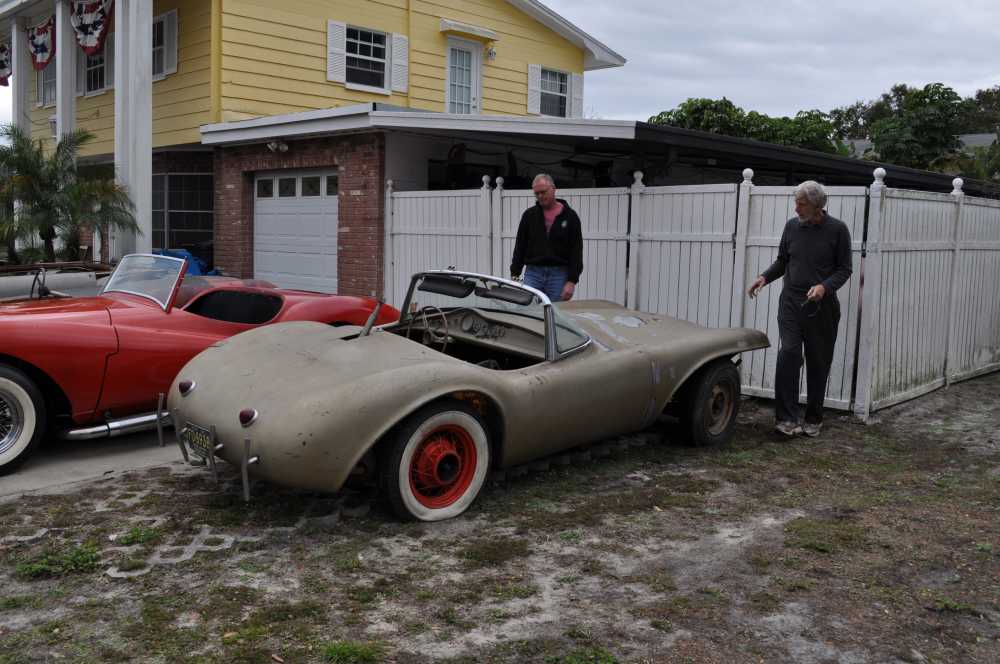 For a brief moment in time, here’s what my neighbors saw when they looked over or drove by.  Remember you can click on any photo in our stories and it will enlarge on your screen. 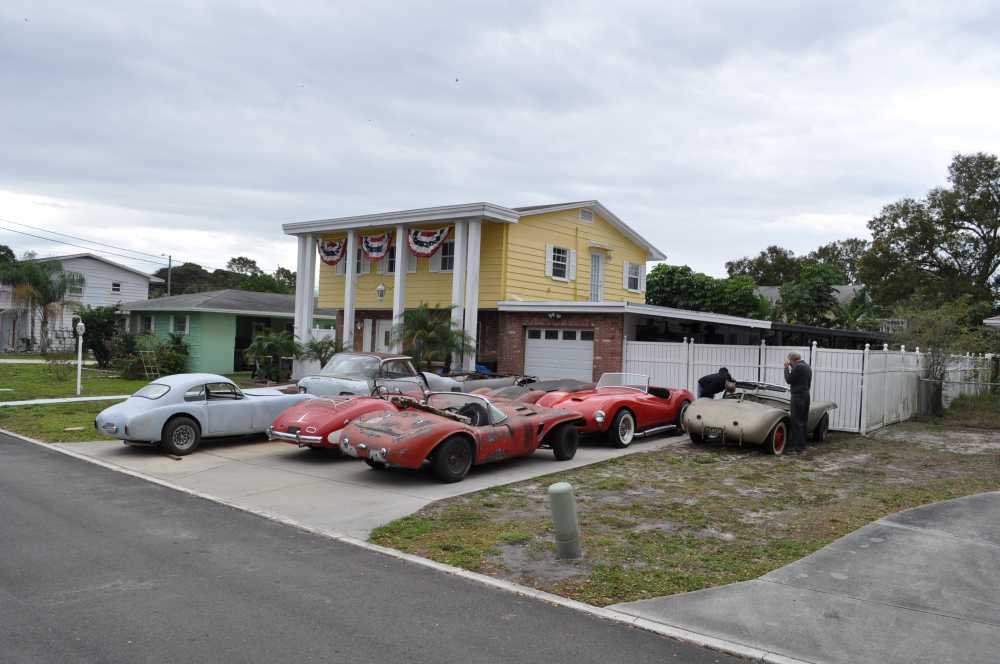 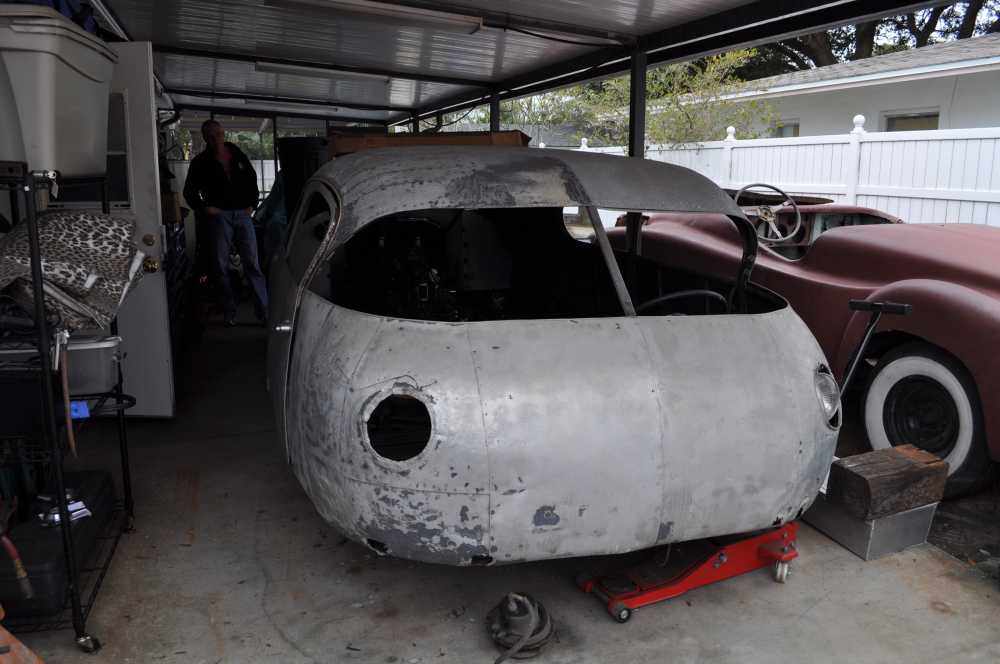 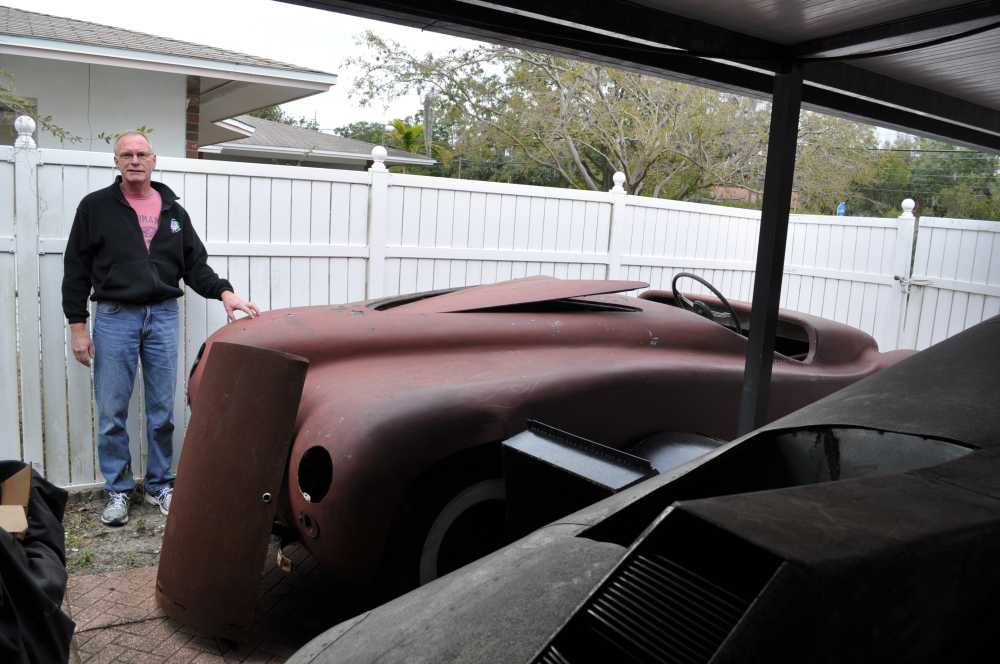 1948 Kurtis-Omohundro Comet: Resting but getting ready to be placed in a museum as a “survivor” 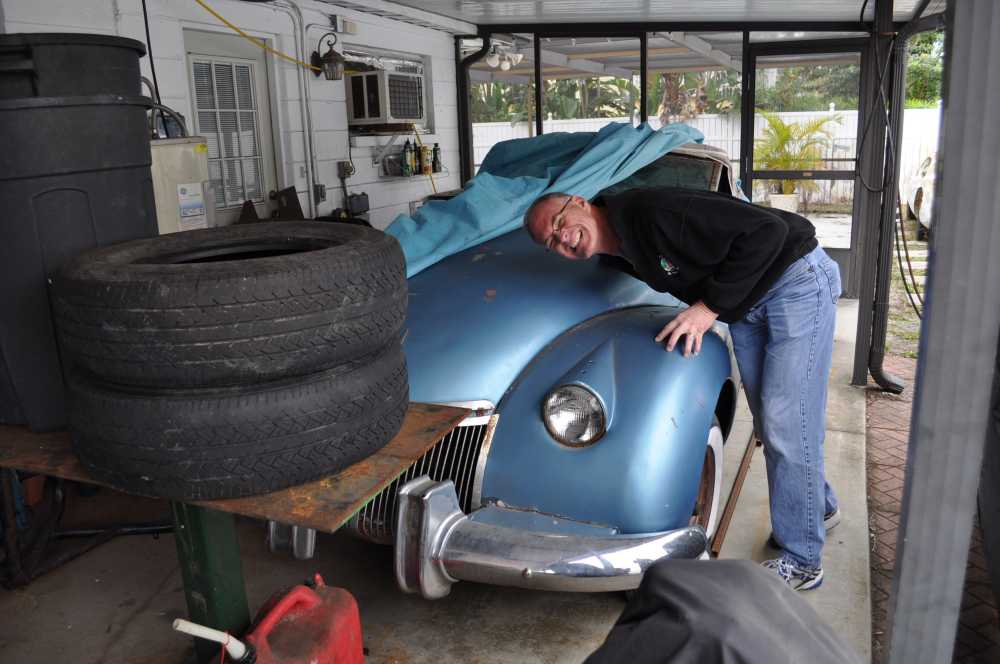 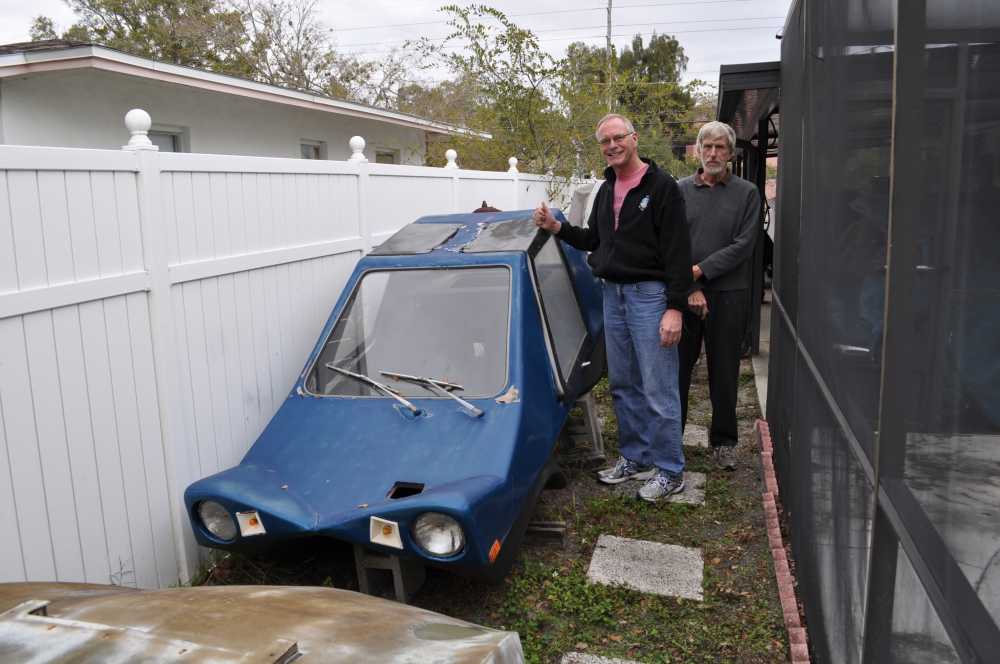 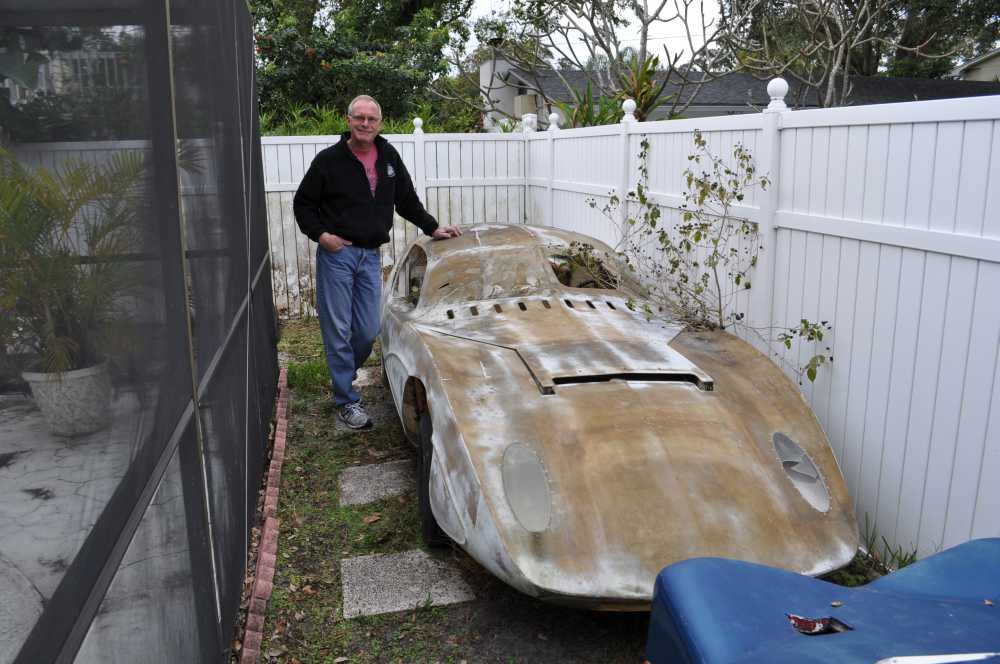 Next Stop: Our New Workshop – “The Glass Menagerie”

We offered to show Tom our new workshop – still in the process of being organized.  This is where most of the cars above were “supposed” to go.  Oh well….maybe some day.  I can dream….

We hope to have work begin on not “one” but “two” Victress S1A’s shortly at our workshop.  Still, Tom would be our first official guest at our new shop so off we went.  In the first photo below you can see Tom with our 1952 Singer race car – a car built by and driven by Southern California racer Ralph Bush.  You can also see the rear fender of the Motor Trend Victress Special as well as one headlight of the Chicagoan peeking through. 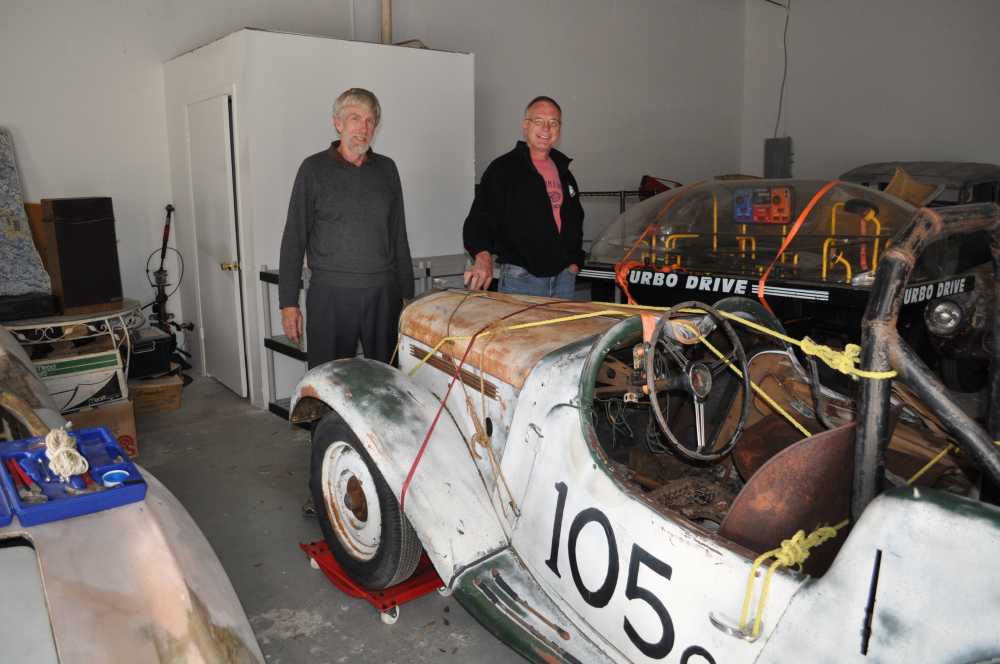 In the second photo you can see the rare and often sought after ’78 Porsche based Aerocon Boa, with the 1954 Chicago Auto Show show/concept car “The Chicagoan” next door.  You can also see Craig Johnson’s hot rod “in process” next to the Chicagoan.

Oh….I almost forgot…the small aluminum vehicle is a 1946 Motorette “Truckette.”  Bob Hope was the official spokesperson of this vehicle in ’46 and beyond – quite a neat story to tell here in the future at “Forgotten Fiberglass.” 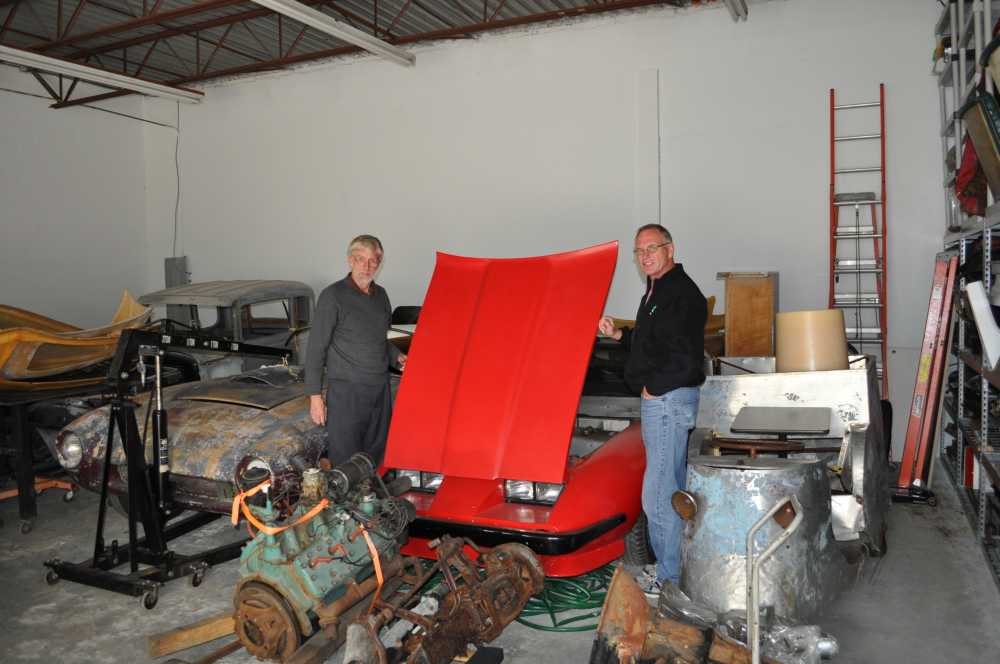 We offered to take Tom to “Fiberglass Farms” which is about an hour away, where we have another 20+ cars in various states of relaxation.  But alas…other responsibilities beckoned, and we’ll have to wait for his next visit.  Something to look forward to is always good 🙂

Later this year, Tom’s twelfth book will be published which is a book written in the spirit of “barn finds” – a topic beloved by most car guys.  When the book appears this Fall, Rick and I are  honored to have approximately 6 stories of “fiber finds” – and some aluminum and steel cars too – that will appear in his book.

Stories that will appear include cars that you have heard about before such as:

And there will be some new stories too which include:

Rick and I want to thank Tom Cotter again for stopping by as well as honoring what we do by including our stories, odysseys, and adventures in his forthcoming book.  Thanks Tom!  Greatly appreciated by us and those that we write about 🙂