I’m honored to call Chuck Tatum and his wife Evelyn good friends.  I was introduced to them by another good friend – Harold Pace. Too many great folks to get to know out there gang 🙂

Chuck is most famously known for his “Tatum Special” – a car he built and raced in the early to mid ‘50s.  And he became a “movie star” in this car as well, as the dedicated stunt driver of his car in the ’54 film “Johnny Dark.”  Here’s a great interview that Will Silk did back in 2011 about Chuck, his cars, and his life:

Click here to review Will Silk’s interview with Chuck Tatum

During one of my many conversations with Chuck, he revealed yet another car he had built with intentions to sell.  “You know about my other ‘Tatum Special’ I built to sell in the 70s – don’t you Geoff???”   I’m always impressed with just how much some of these guys did like Chuck Tatum.  I have a hard time cleaning my house, let along designing, building, and racing cars – and more – as Chuck did and so many other guys of the era too.

Oh…before  I continue….Alden Jewell shared with me postcards of some really neat old car dealerships – one of which featured our friend “Chuck” as you’ll see below: 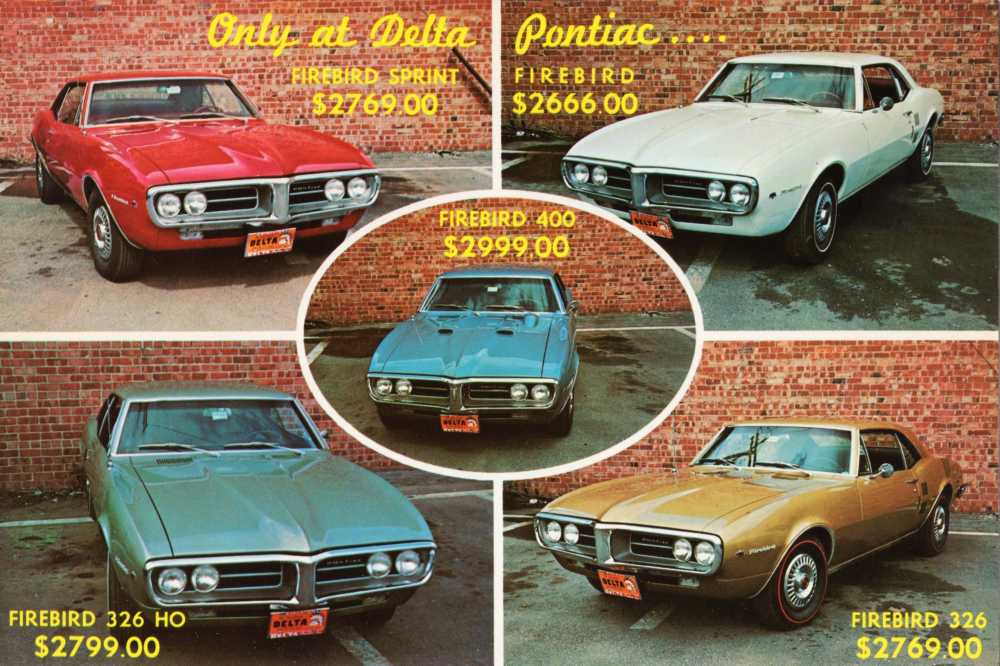 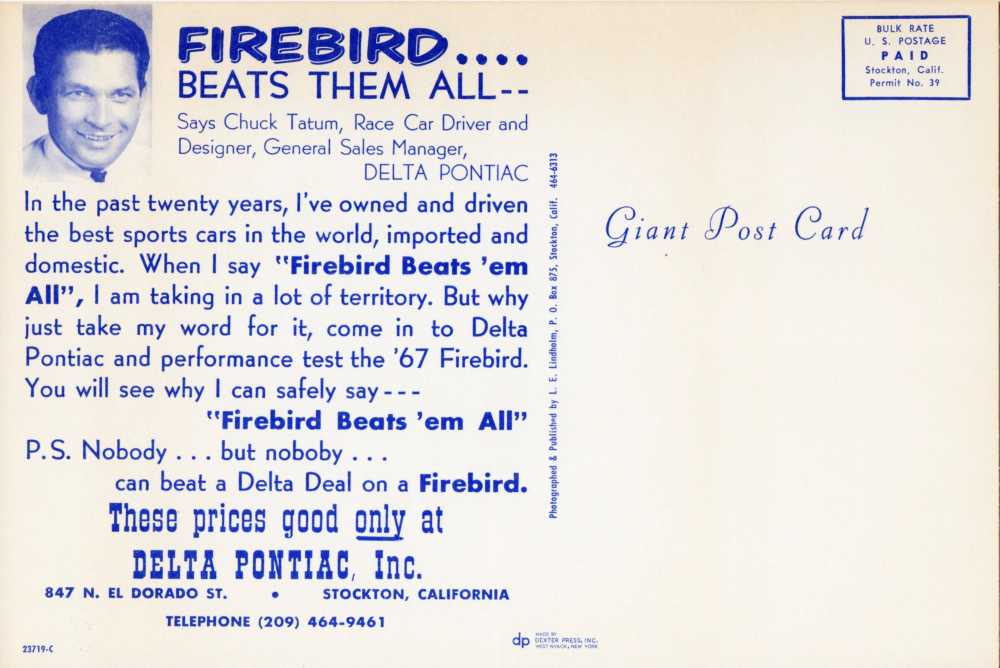 So…back on course, Chuck sent my some photos of his second ‘Tatum Special’ which was based on a VW platform.  “Neat!” I thought to myself, but I didn’t explore any more history on it until recently when I came across a magazine showing none other than Chuck’s “Tatum” on the cover of it with a great article about it inside.  The good guys get all the publicity 🙂

Let’s see what they had to say about this really cool fiberglass car – VW based in the ‘Can-Am’ style – built by Chuck Tatum: 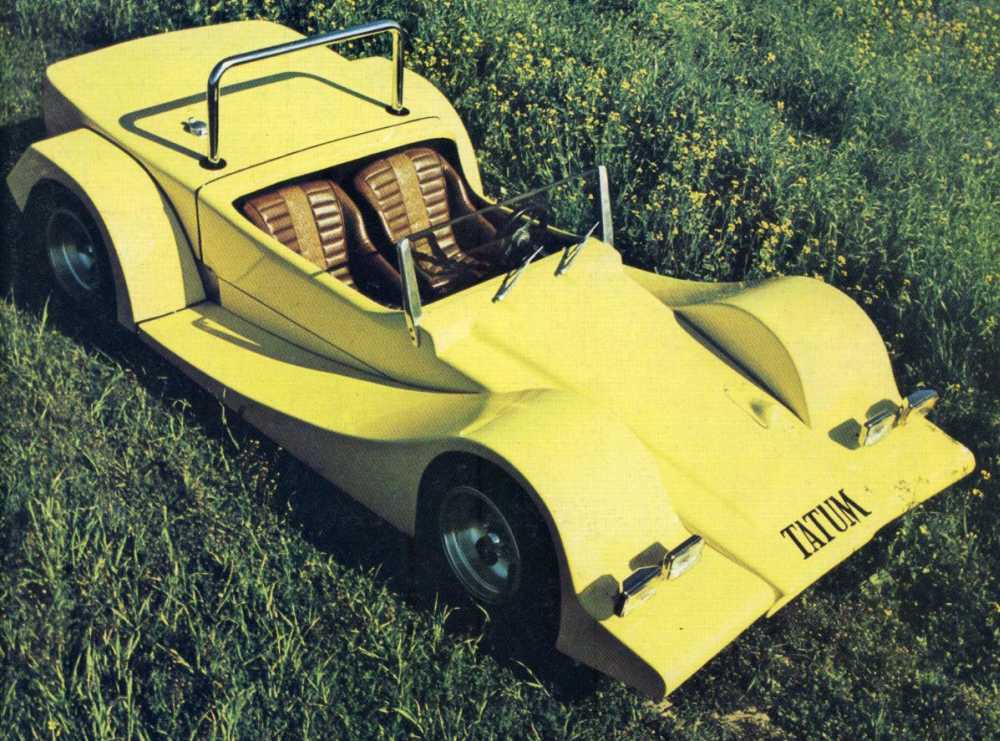 There’s more to our cover car than meets the eye.  It its full-fendered configuration the Tatum does duty as a sleek freeway runabout.  Given the proper safety equipment, suspension and engine modifications it can run in SCCA’s B or C Sports Racing Class where its far-out Cam Am styling would appear right at home.

Or you can loosen a few bolts, drop the fenders and – Presto! – the Tatum is an instant street roadster.  To top it off, would you believe the Tatum rides on a chassis that is about 90% Formula Vee?  The Tatum is the latest brain child of race car designer/builder Chuck Tatum of Stockton, California.  Chuck says the idea for the car came to him while he was testing one of the Crusader Wedge Formula Vees (also designed by him).

He just figured it would be neat if someone were to take a Vee chassis and design a road car around it.  The result would be a light, agile car offering good performance with superb handling, along with a price tag that wouldn’t tear too large a hole in a guy’s pocket book. 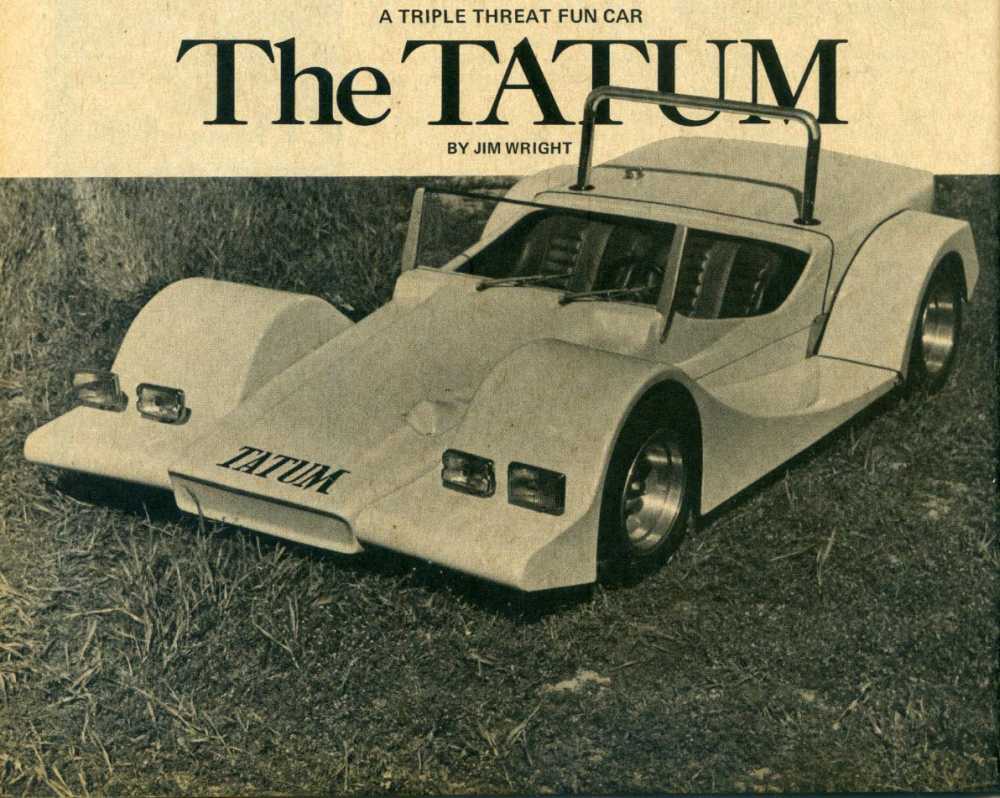 A couple of years went by and the Crusader company more or less went into limbo, while Tatum moved on to other interests.  But the idea persisted.  In fact, it got very persistent every time he opened his garage door, since all the Crusader molds, jigs, and chassis parts happened to be stored there.  It finally got to be too much for him, so he built the Tatum.

Sharp-eyed readers who have a copy of the May 1970 issue of “Dune Buggies & Hot VWs”, which carried a feature on the Crusader Wedge, will probably spot quite a few familiar details that were incorporated into the Tatum from the Wedge.  For starters there’s the chassis, which is almost identical to the one used in the FV.  It is a ladder-type based on two main frame rails of mild steel square tubing having a 2.5 inch cross section with 0.083 inch walls.

A substructure of 1.0 inch tubing adds beam strength and also provides mounting points for the body, fuel tank, and steering wheel.  Torsional strength is added through four crossmembers, also 2.5 inch square tubing.  Front suspension is late balljoint type VW that has been lowered and softened in the best FV tradition – the top torsion bar is completely deactivated, while the bottom bar has been “set” by twisting it until the desired ride height is reached. 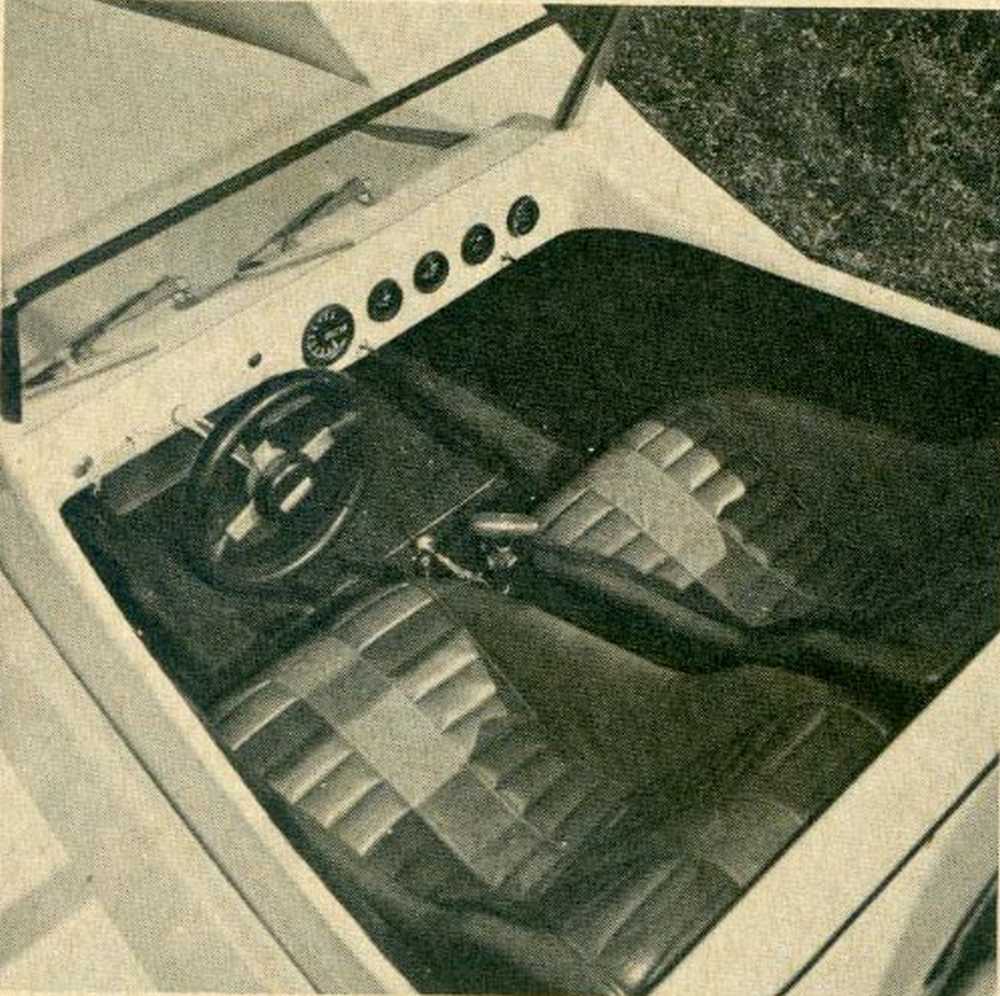 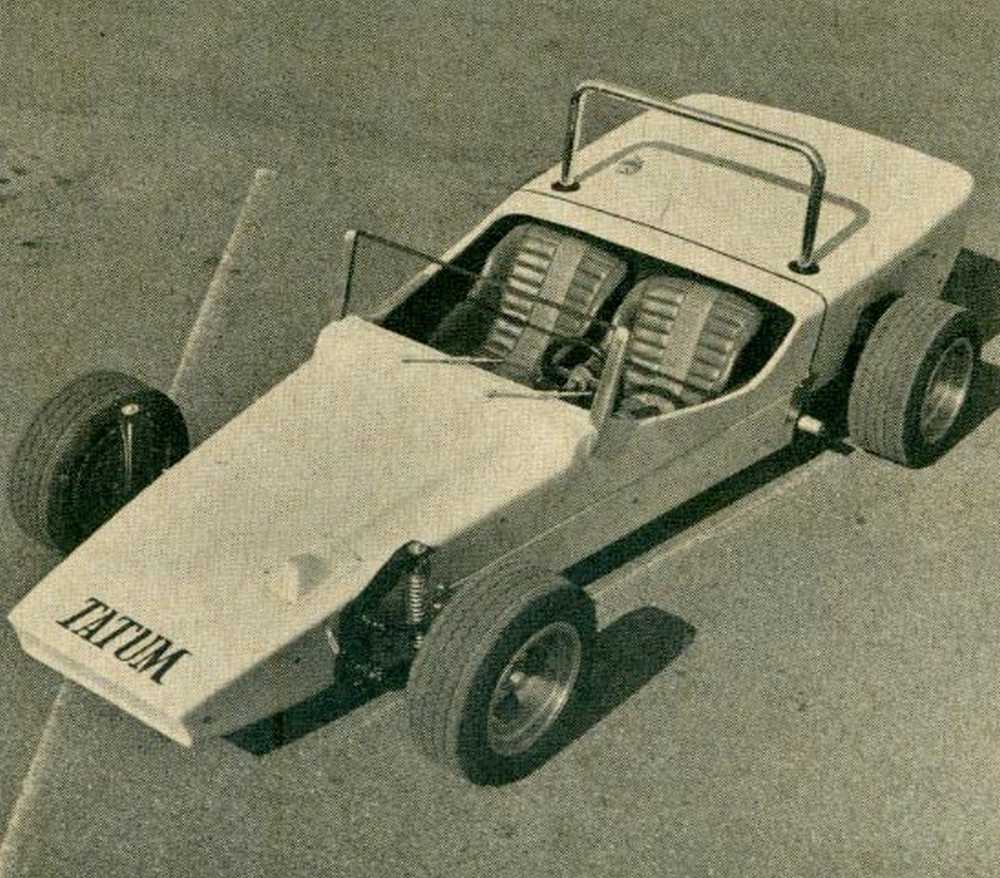 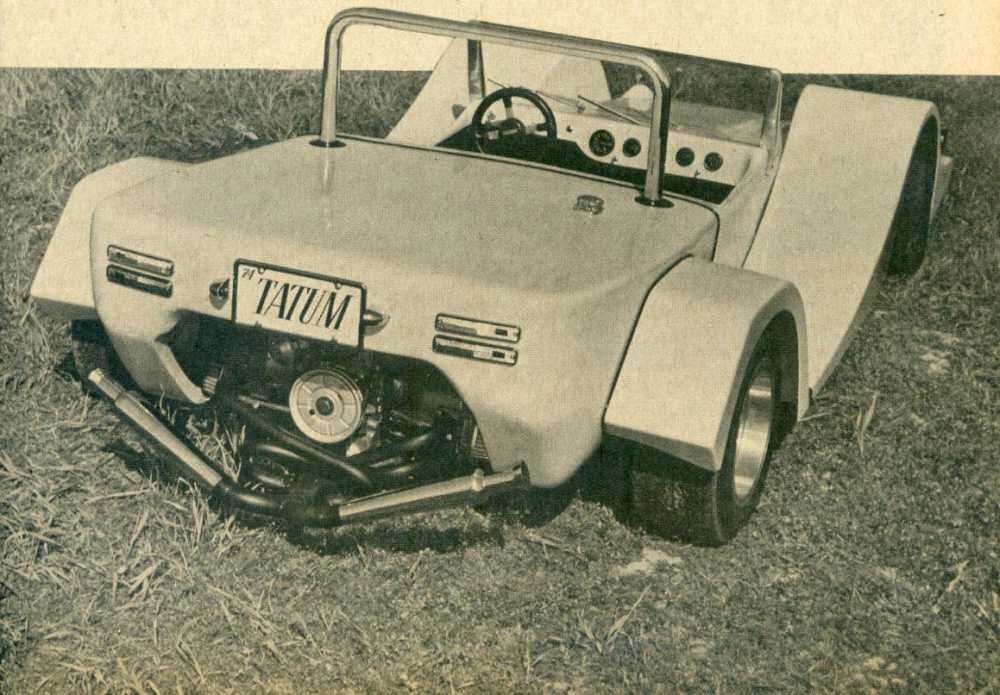 Caption For Three Photos Above:

Can Am styling is as up-to-date as anything on the road today.  Headlights used on the prototype aren’t legal for street use in any U.S. state, will be replaced with legal units when Tatum is marketed in kit form.  Smallish tail lamps may also have to be replaced with larger units to make car legal.  Show-type exhaust system will also have to be replaced to comply with noise laws.  Engine in prototype is a stock 1600 cc unit, but it doesn’t have any trouble pushing the 1200 lb. Tatum near the 100 mph mark.

Roll bar will be included in the kit.  Cockpit is finished off with carpeting that extends up the sides of the body.  Seats are from the Wedge FV and are designed to give good body support.  Instruments are Stewart-Warner Stage 3 units, while steering wheel is a leather covered competition model.

Gearshift pattern in prototype is reversed, but will be standard in production kit.  The Tatum as street roadster.  Again not too legal, but it sure is cute.  Hood up provides clearance for VW steering box, which isn’t necessary when rack and pinion is used.  Body side panel is dropped on driver’s side for added arm room.

Rear suspension is by a Type 3 torsion bar housing incorporated into the Vee chassis.  Tatum chose the Type 3 setup because he felt that its fabricated, stamped steel design was both lighter and stronger than the more common Type 1 design.

Chassis control and settings are provided by a pair of Andeck adjustable coil/shock units up front and a pair of Bilstein FV coil/shock units on the rear.  The prototype car shown on these pages runs Bridgestone road racing tires mounted on Ansen wheels.  The fronts are 9.00-13s on seven inch rims, while the rears are 10.00-13s on eight inch rims.

However, the body has adequate clearance to run either 14 or 15 inch wheels.  The only differences between the Tatum chassis and the original FV chassis is that it has been stretched three inches to bring the wheelbase to 86.5 inches.  The steering is stock VW, but the chassis will also take a Porsche 914 rack and pinion unit.  Stock tie rods have been replaced with stronger rods incorporating Heim joints.  The steering has been speeded up with a pitman arm extender.

Stock VW brakes are used and are more adequate for the 1200 pound car.  Dual master cylinders are used and front-to-rear proportional braking is obtained by using an adjustable yoke from the FV.  The hand-laid glass body breaks down to eight separate pieces which include two front and two rear fenders, nose and cockpit section, rear section, and two lower side panels. 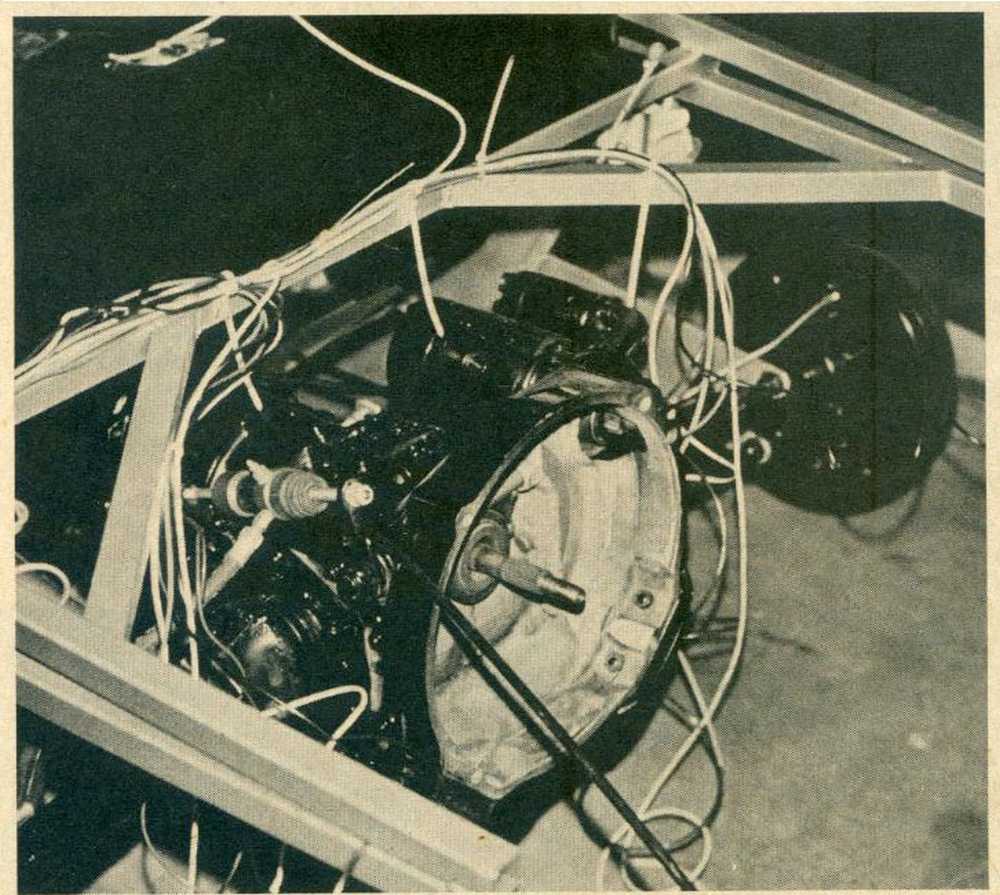 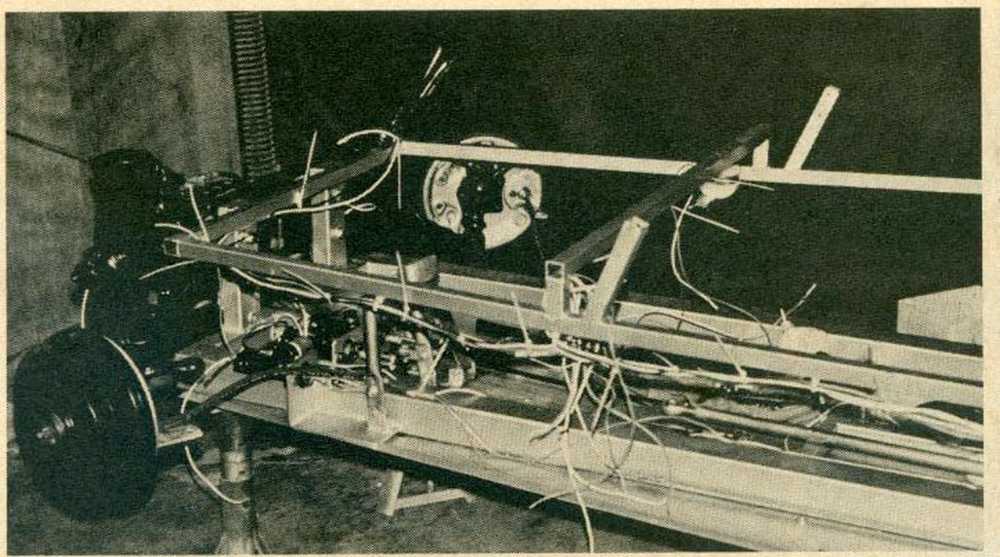 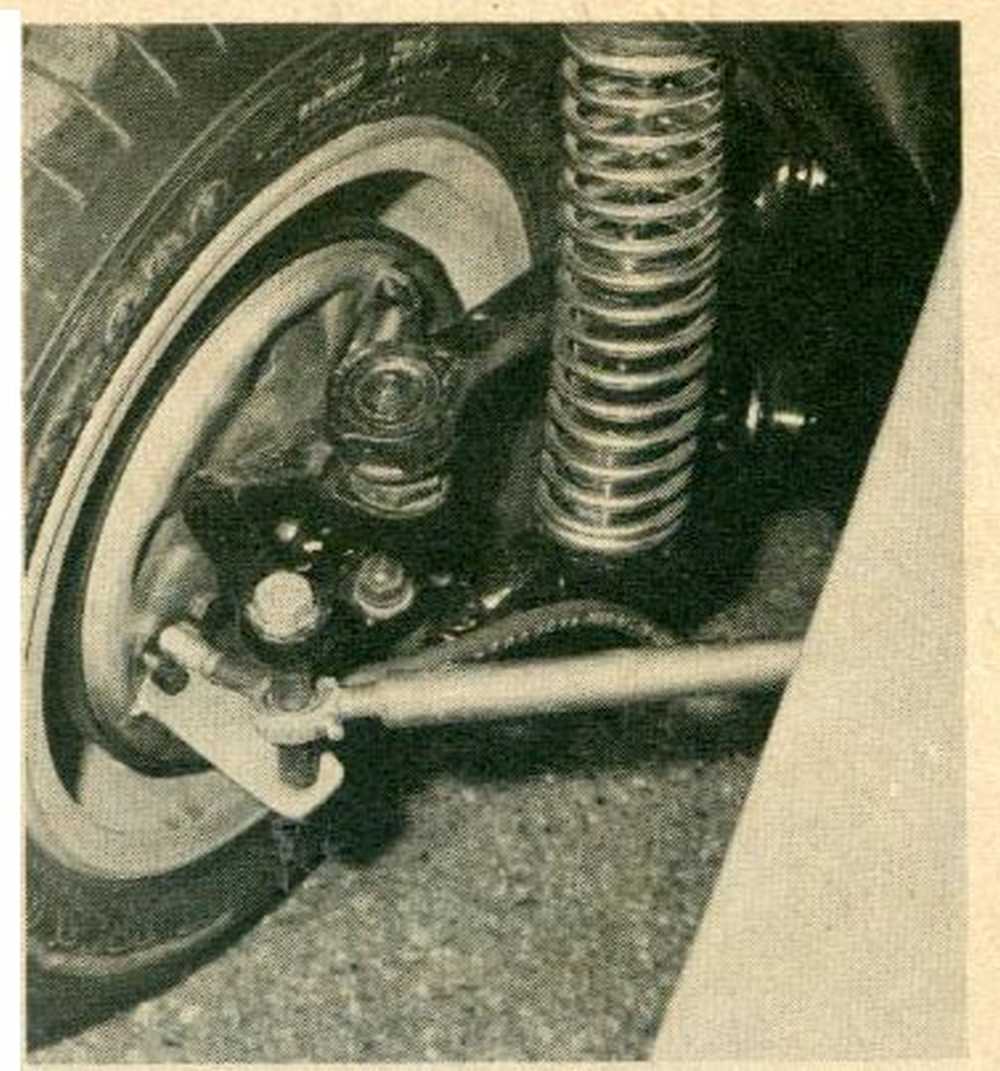 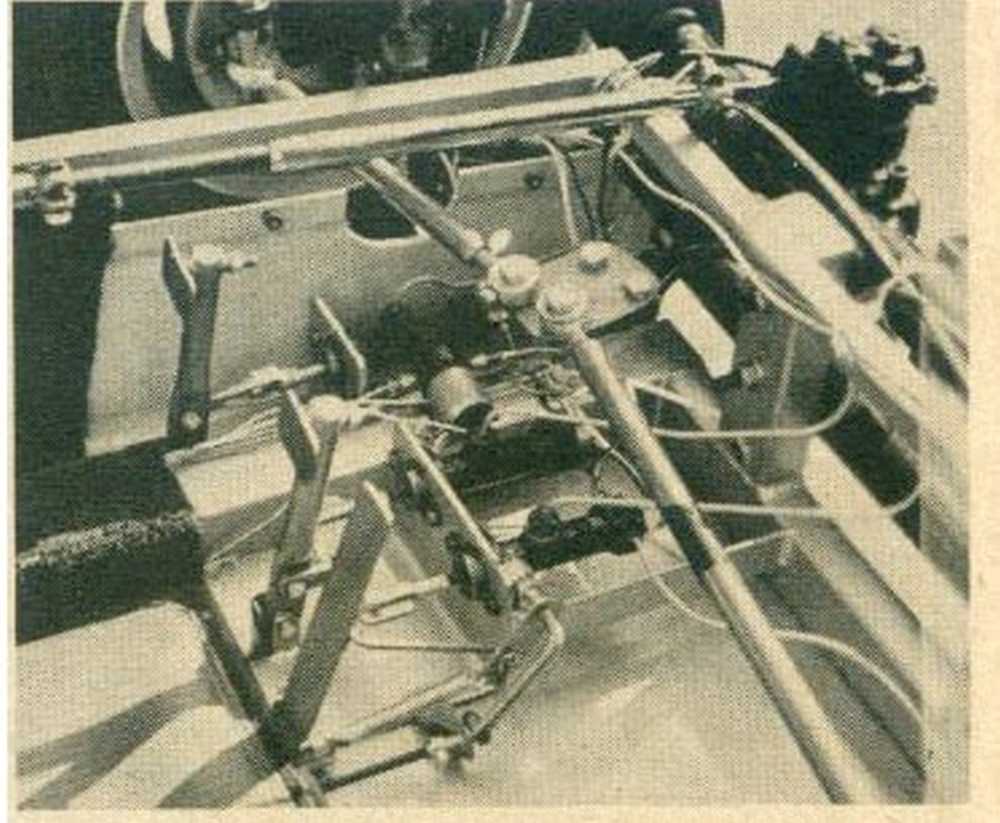 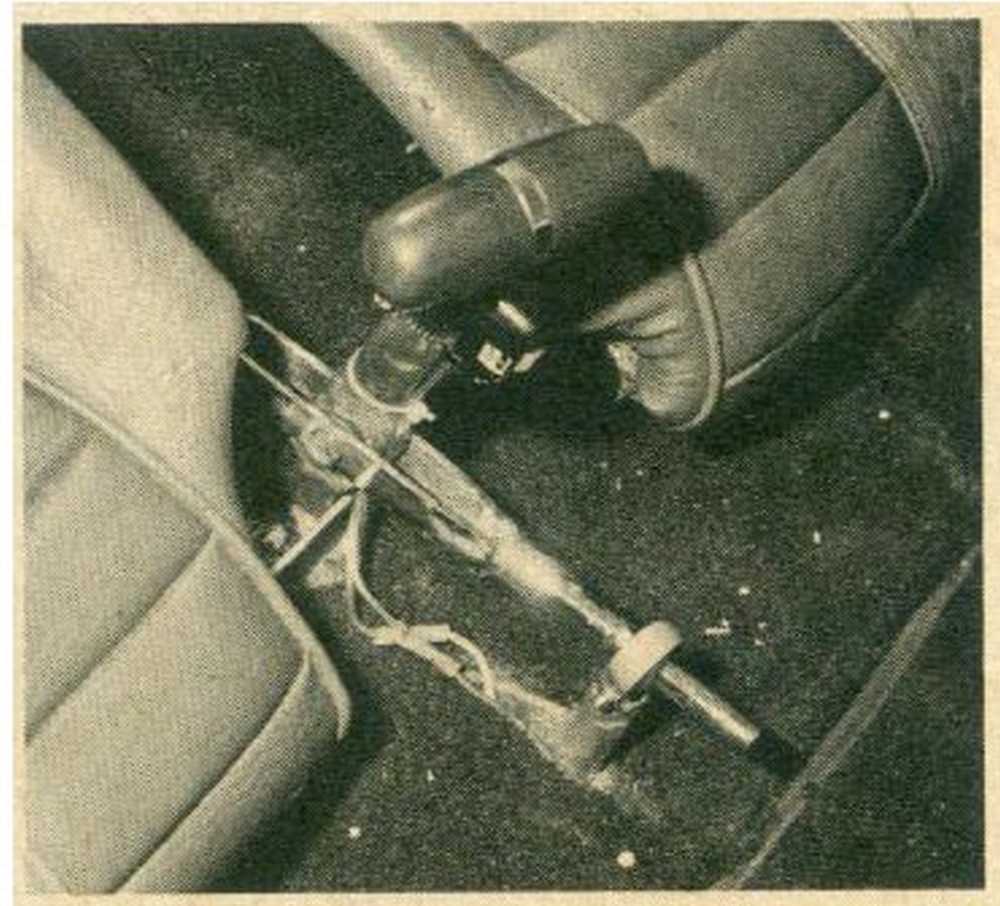 Caption For Five Photos Above:

Construction stage photo shows chassis details.  Main frame rails are 1.5 inch square tubing, while subframe is made up from 1.0 inch square tubing.  Steering  is modified by addition of a lower bracket with stand-offs on each side of the Heim joint so it can be positioned for correct tie rod angularity.  Andeck adjustable coil/shocks are used on the front.  Subframe at rear is utilized mainly to mount the rear body section, but also adds strength to the main chassis. 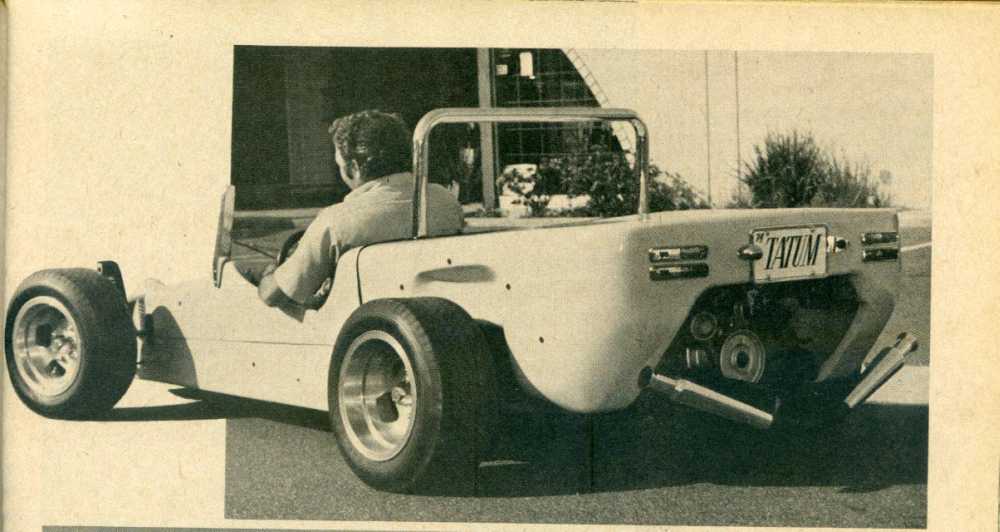 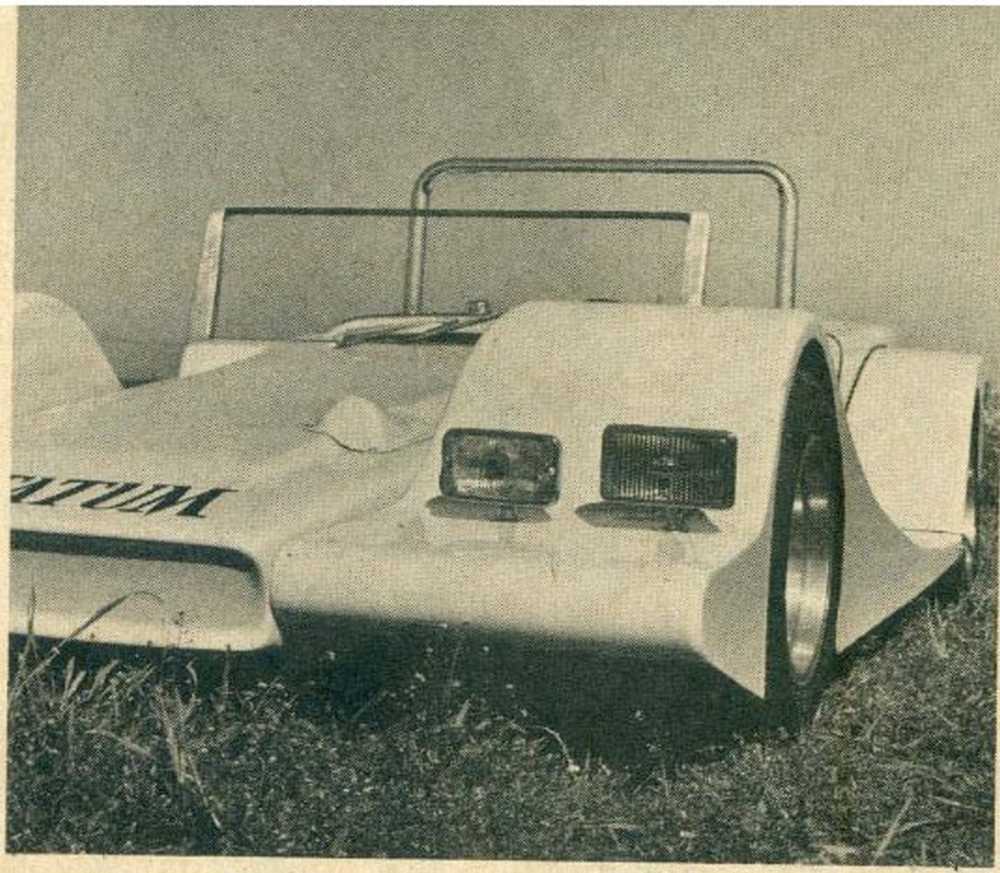 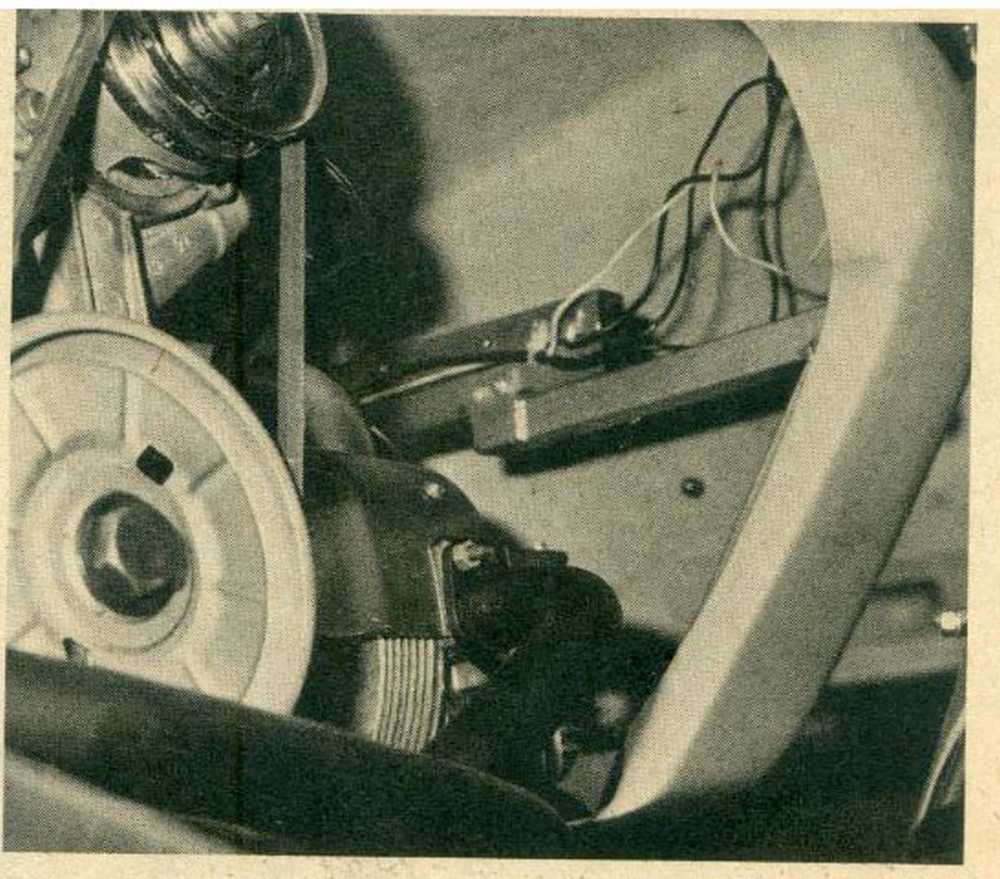 Caption for Three Photos Above:

Fenders can be removed in about 20 minutes.  If roadsters are your bag, rear fenders could be retained and cycle-type fenders made up for the front to make it street legal.  Now if there was just some way to “show” that the car had been first registered prior to 1970 (in California that is) it is light enough to run without fenders.

Designer Chuck Tatum is in the car.  He is about 6’2”, and around 200lbs., to give you an idea of the relative size of the car.  Above left, an off-road car it isn’t.  Ground clearance is minimal.  In production kit, one rectangular light, carrying a yellow lamp, will be retained as a turn indicator on each side.

At this time, Tatum hasn’t finalized the legal headlight design, but he plans on something that will pivot out of sight during the daytime, and then can be raised to the legal 24 inch height at night.  Lower right, engine is protected from weather, but is still accessible for maintenance.

The belly pan is aluminum.  The windshield posts are cast aluminum and the windshield is safety glass.  The cockpit will comfortably seat two adults and offers plenty of legroom.  The buckets are also borrowed from the FV and were designed to give good support under racing conditions.

Instruments are the latest Stewart-Warner Stage 3s.  Steering wheel is a 13 inch leather covered competition model.  The prototype was recently entered in the Sacramento Autorama where it took first in the sports car class.  Due to the interest the car generated there, Tatum is now planning on marketing the car in kit form.

But in order to do this, several changes will be made in order to make the car street legal.  Round headlights will replace the rectangular units shown here, and the tail lamps will have to be larger.  The finalized car will also use a Karmann-Ghia disc brake front end and will provide mounting provisions for the late VW 4-joint rear end.

The body pieces will be fitted and the chassis will be completely welded.  Upholstery will be furnished and the entire car will be primed ready to paint.  The buyer will have to bolt everything together, wire it and paint it.  He will also have to supply his own engine, transaxle, wheels and tires.

The projected price for the complete kit is $2495.00 FOB Stockton, California.  Further information about the Tatum can be had by writing Chuck Tatum, 1150 Lincoln Road, Stockton., California, 95207. 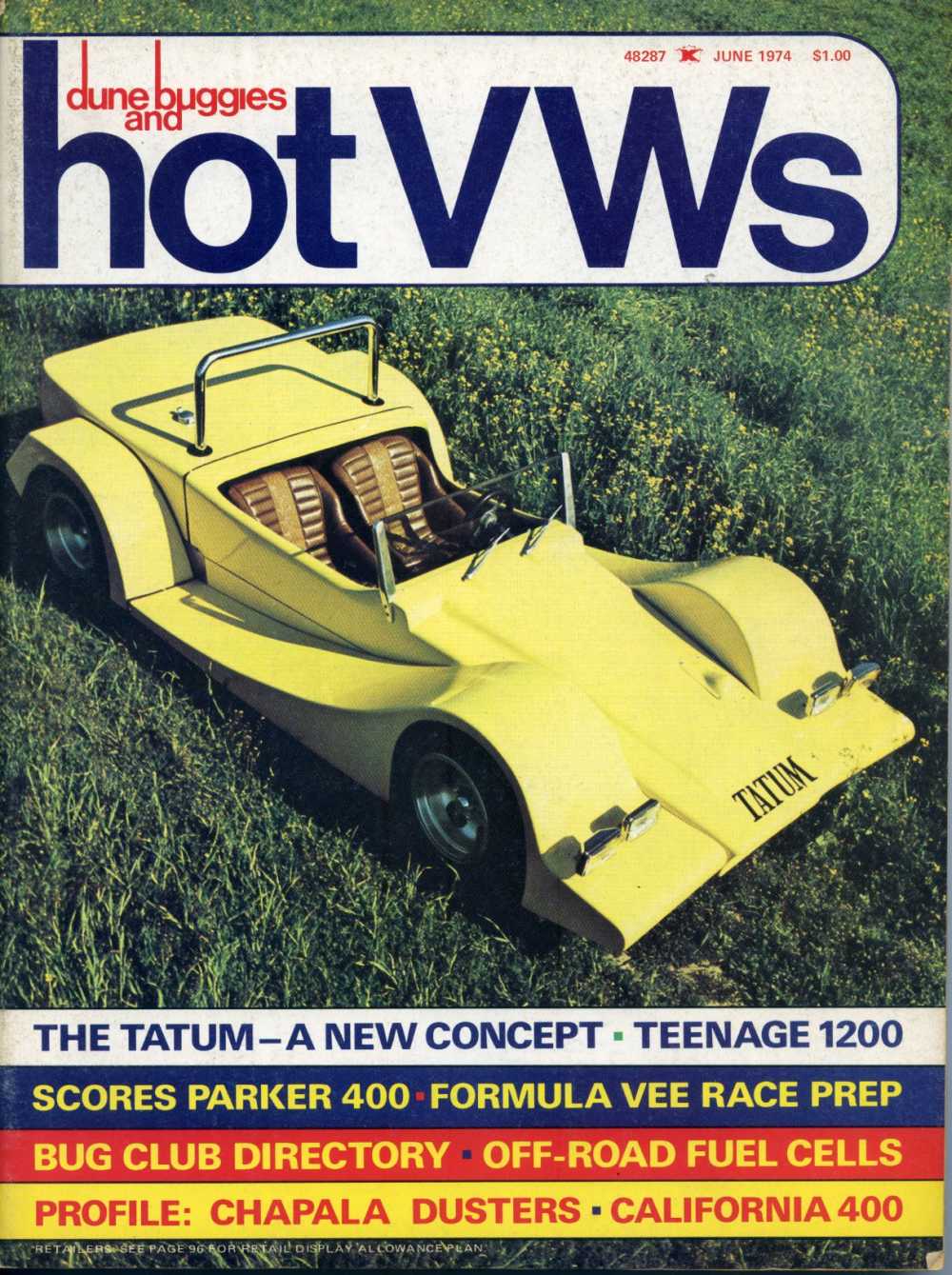 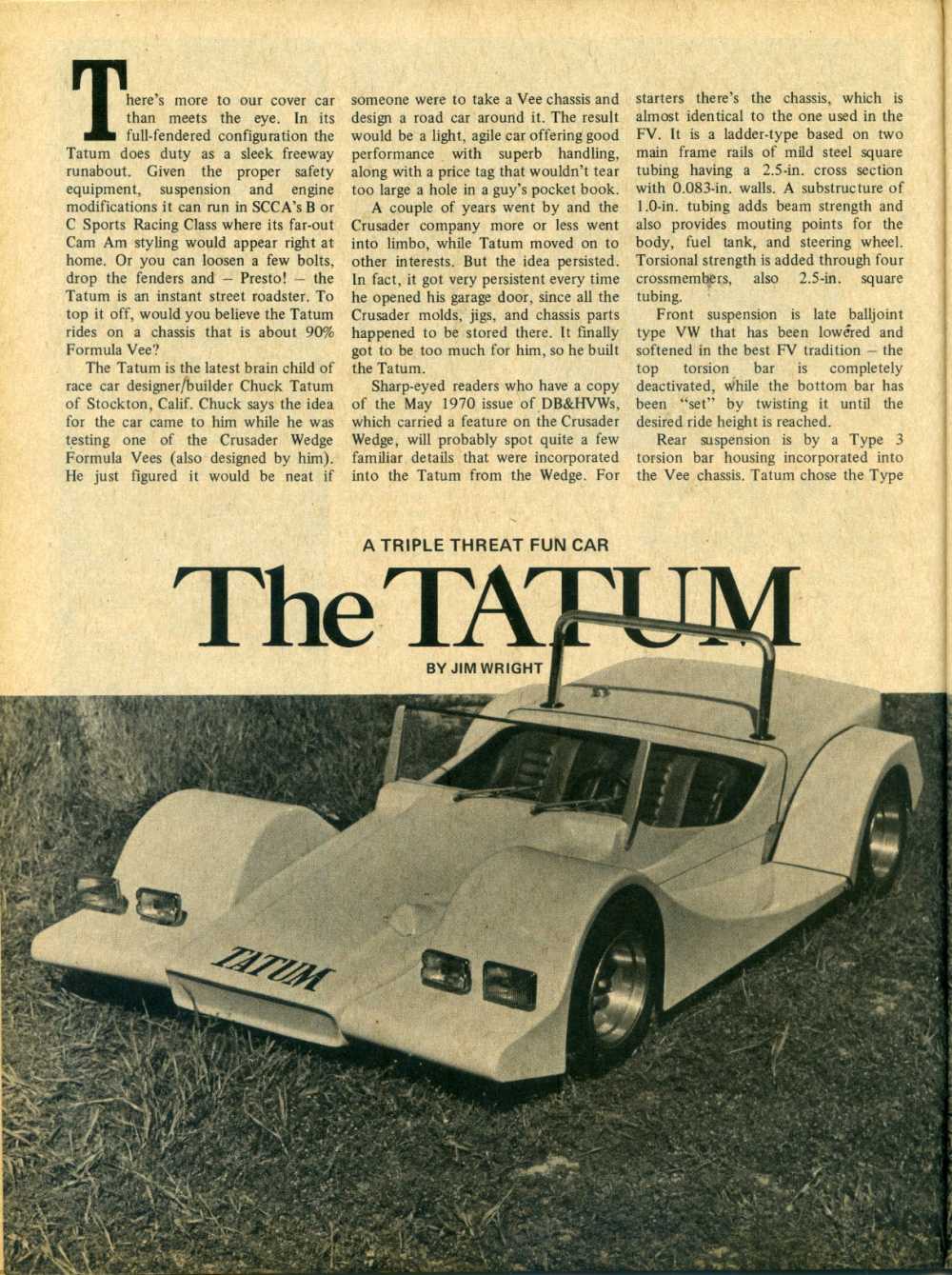 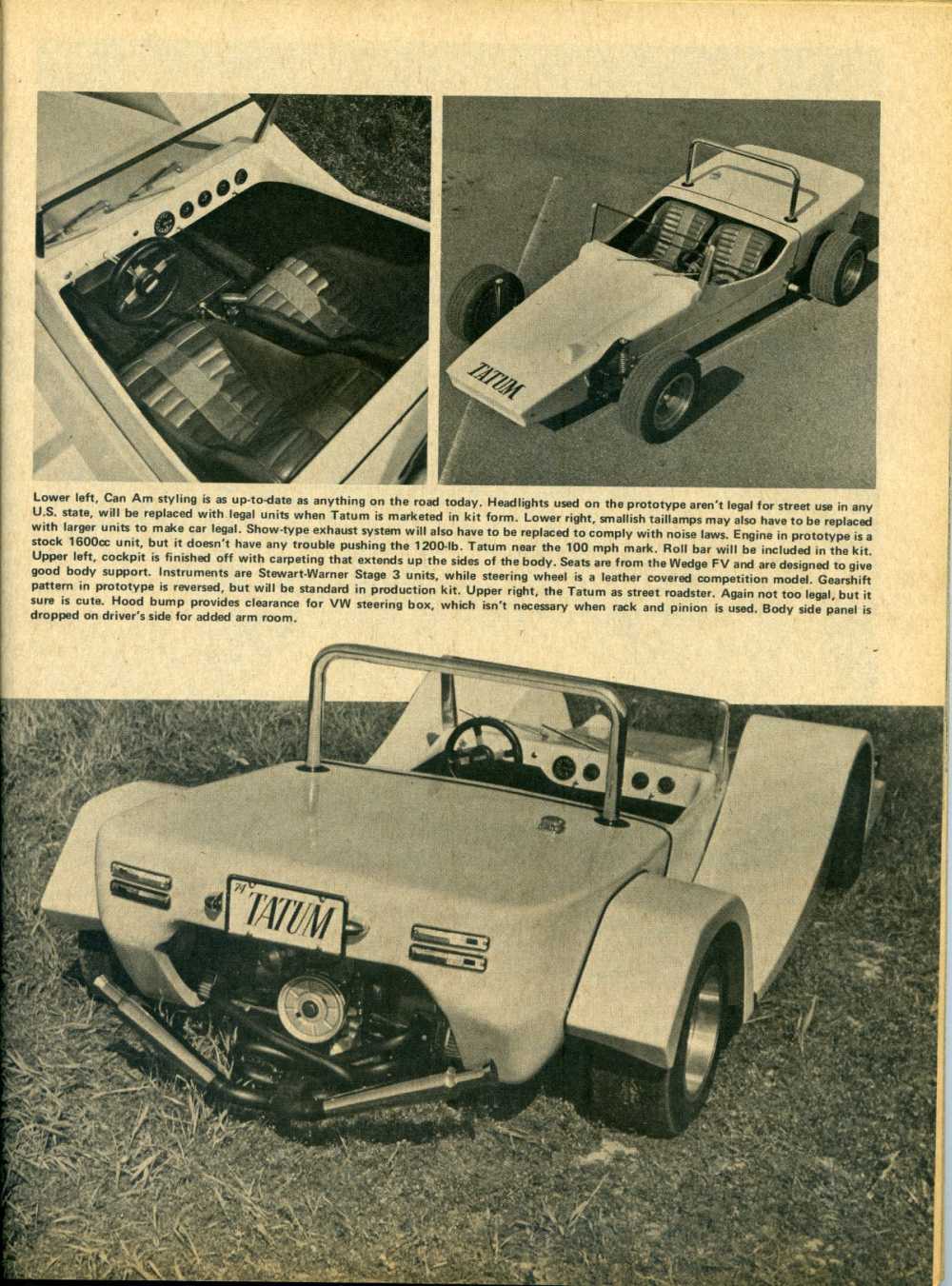 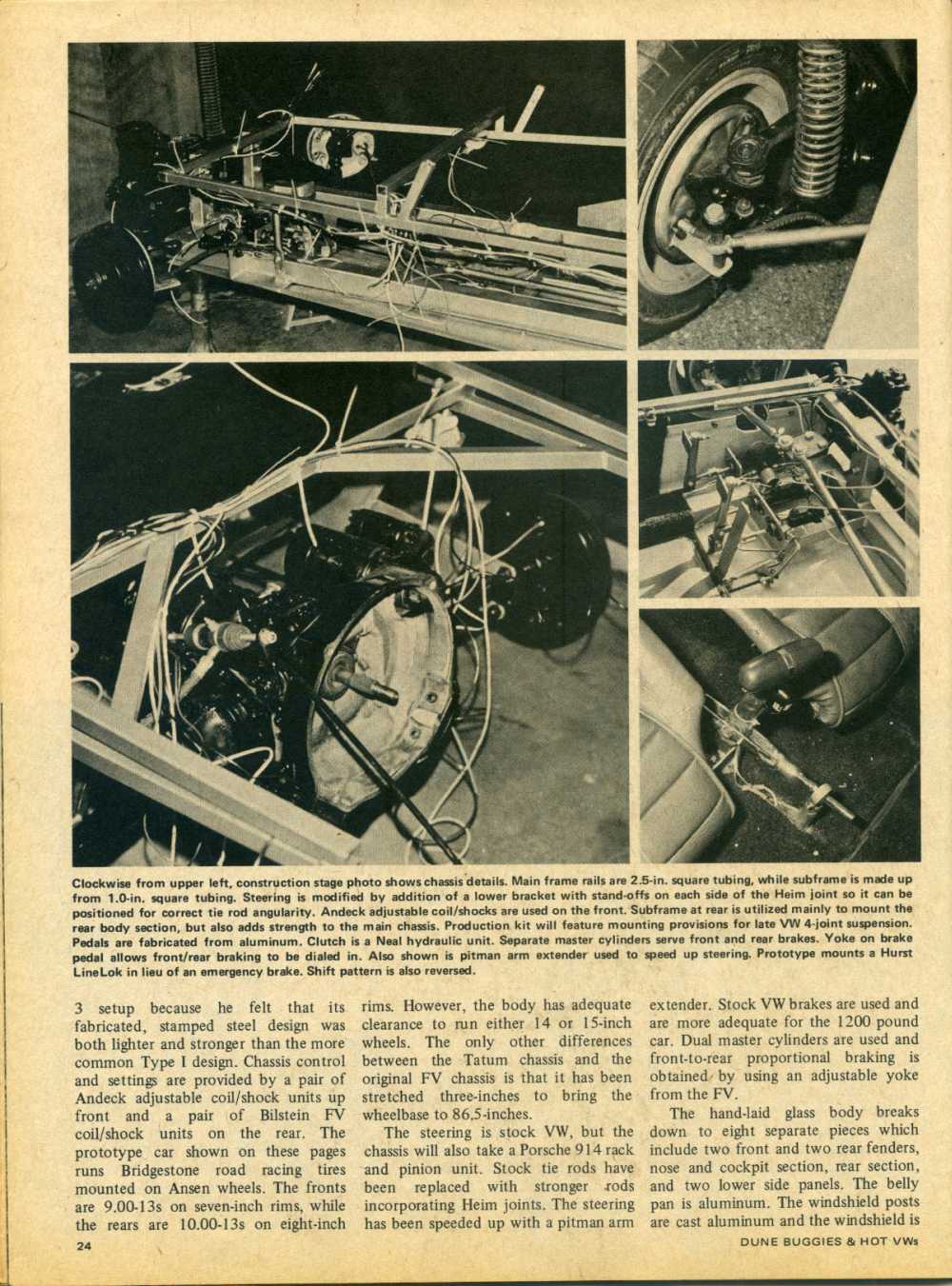 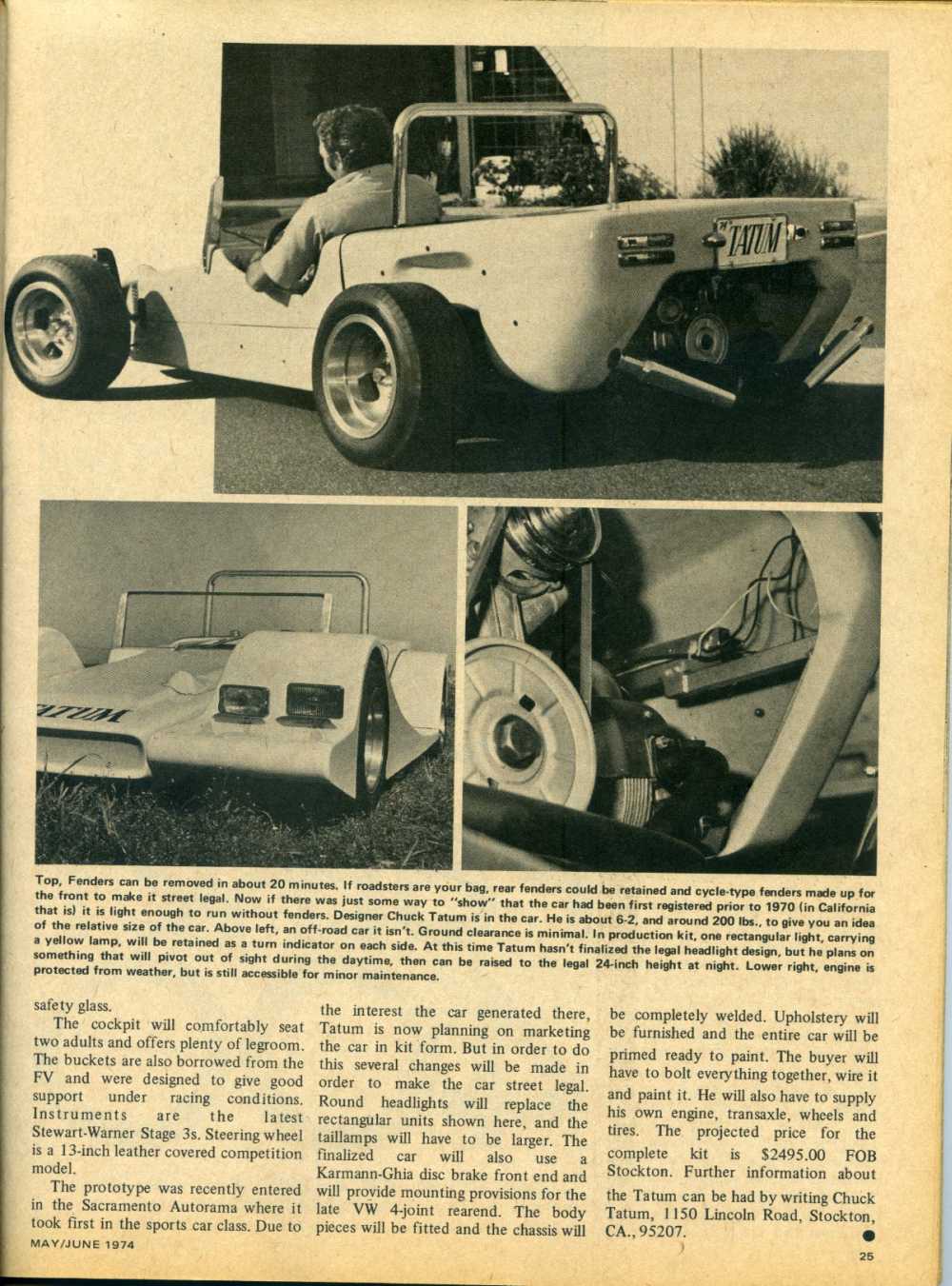 So earlier today I called Chuck and asked him about his car.  And I could hear through the phone the sparkle in his voice when he talked about it.  “Very unique car and style for its time” Chuck said.  He built it so that you could have “two cars in one” – and maybe more if you thought of it as a race car.

Chuck built the full prototype that you saw in the article, and the author of the article, Jim Wright, had him bring the car from Chuck’s hometown in Stockton, to San Francisco for the test drive and “shoot.”  Chuck really liked the car and built a second one – a kit – for another customer.  “I built the frame and the body components, but the customer assembled it / finished it from the kit – and that was the last one I built.”

“What happened?” I asked – “Why not more?”  Chuck revealed that the oil crisis of ’73 and ’74 tripled the cost of fiberglass and resin supplies for him making it less than attractive to build and sell.  He tried to wait it out until the material price would drop, but that time never came and he moved on to other projects.

So you know me….I want to know where these cars are today.  For now it’s a mystery, but maybe one of you – the knights of shining fiberglass – may seek out and find one or both of these new “Tatum Specials.”   What a great story that would be to share here on Forgotten Fiberglass.