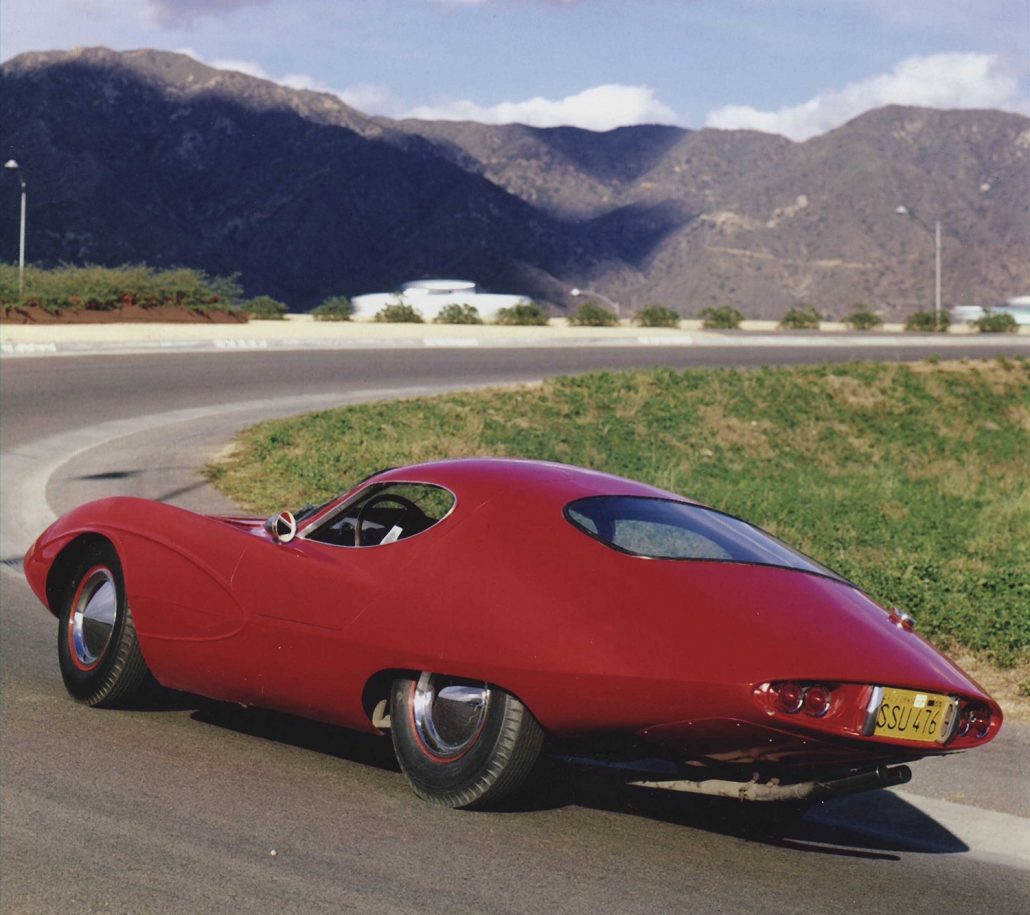 Alton Johnson’s LeMans Coupe Was The First Car Completed and Appeared in the August, 1960 Issue of Road & Track Magazine

“All stories about American efforts in the famous French 24-hour endurance race carry the phrase “…not since Jimmy Murphy drove his Duesenberg to win in 1921 has an American car been victorious in this event.

Many great minds have dreamed of concocting the winning formula, and one of the latest to be worked out in detail and which shows more theoretical promise than any to date is by John R. Bond, design-engineer and publisher of Road & Track Magazine.”

No other “Special” of the 1950s captured the imagination of the public as the design, build and debut of Strother MacMinn and John Bond’s LeMans Coupe.  Bond created the “challenge” and designed the chassis; MacMinn conceived the body.  Considering the concept was penned and published in 1958, the styling was futuristic, the goal was lofty and the challenge was inspirational.  Starting with a dream, John Bond sought to bring forth a race car that could ultimately do what Briggs Cunningham did not do back then – win the LeMans race for America.

It began with a series of Road & Track articles in late ’57 when Bond formed a team of engineers and designers who could create such a car.  While Bond brought engineering expertise to the table with himself and his team, he lacked a designer for the shape of the car.  To accomplish this, he gave the nod to his good friend Strother MacMinn – head of design at the Art Center in Los Angeles which was “ground zero” of automobile design at that time in America.  In the final articles posted in R&T, MacMinn created what would become the design of his most legendary car – MacMinn’s LeMans Coupe. 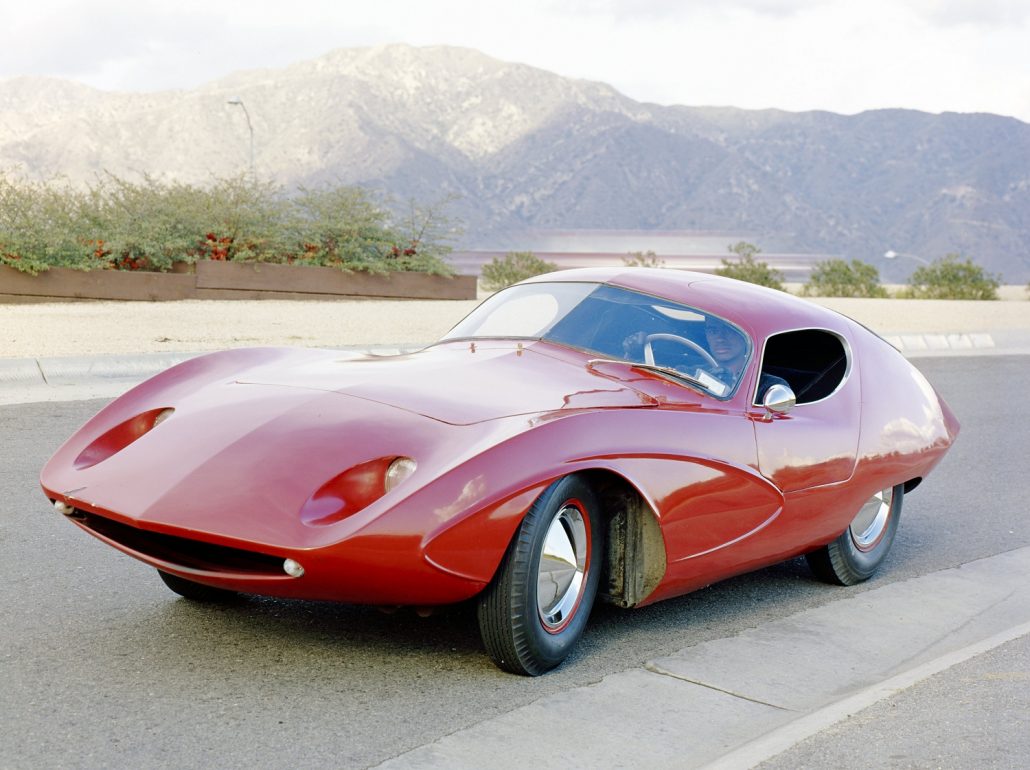 But the Bond/MacMinn team didn’t collaborate on this project to build the car.  Their challenge in the articles was to “America.”  They encouraged individuals and teams to embrace their project and build a car.  While they were focused on the build of a race car, MacMinn later extended his designs of the car in his 1959 book “Sports Cars of the Future” to include several versions of the LeMans Coupe that encompassed race and sports cars.

Ultimately, two teams took up the challenge to bodies and cars.  The first and most famous of the finished cars was built by Alton Johnson, an employee of Victress Manufacturing (sports cars and bodies) and national winner of the Fisher Body Craftsman Guild contest (GM) on car design.  Alton teamed up with Marvin Horton and Ed Monegan (employees of Marquardt Corporation) who had lofted the designs shown in the magazine to a full-size drawing from which a buck and mold could ultimately be made .  At least six bodies were created of which 3 cars were completed – each by different “builders”.  Two remaining cars were partially built in period and a remaining body was never configured for a “build.”  But this wasn’t the only team.

Another team located in Gardena, California designed and built their own LeMans Coupe sports car .  This one was led by Edward Tift and his son Frank who did nearly all the work from a shop at the back of their Gardena home.  They first called their finished sports car  the “Tempest” but later changed the name to the “Dolphin.”

“This is the most exciting sports car design actually constructed in the United States in years.  Its elegance and high style enhance rather than detract from overall performance.  Correct aerodynamically, the body shape puts to shame anything else which has been constructed for the Chevrolet V8 engine, including the best efforts of General Motors.  This is not too surprising.  MacMinn taught many of the GM designers most of what they know.”

The Bond/MacMinn collaboration was a product of John Bond’s desire to inspire a winning LeMans racer being developed in America.  This never happened.  The closest this got was Marvin Horton’s desire to build a race car from the plans, but as you can review in the interview with Ed Monegan in 2006/2007 on this website, Horton’s racing plans ceased when a rules change was enacted.  So the cars finished in period by Alton Johnson and Carl Shoonhoven were sports cars and the one finished later in the 1960s by Walter Jackson was a drag race car.  For these reasons, history remembers what was promoted and seen in the day – Strother MacMinn’s LeMans Coupe sports car built by Alton Johnson. 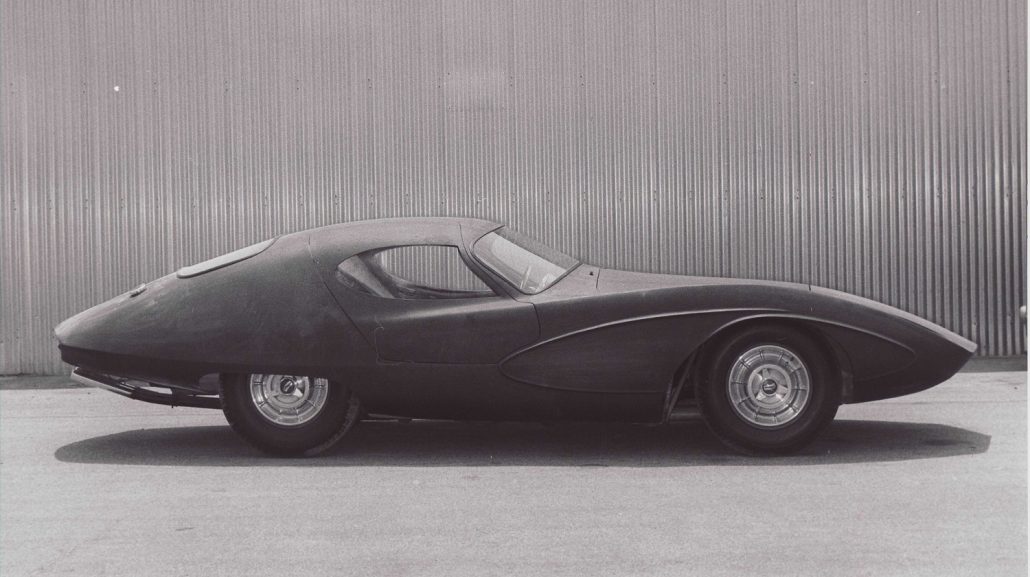