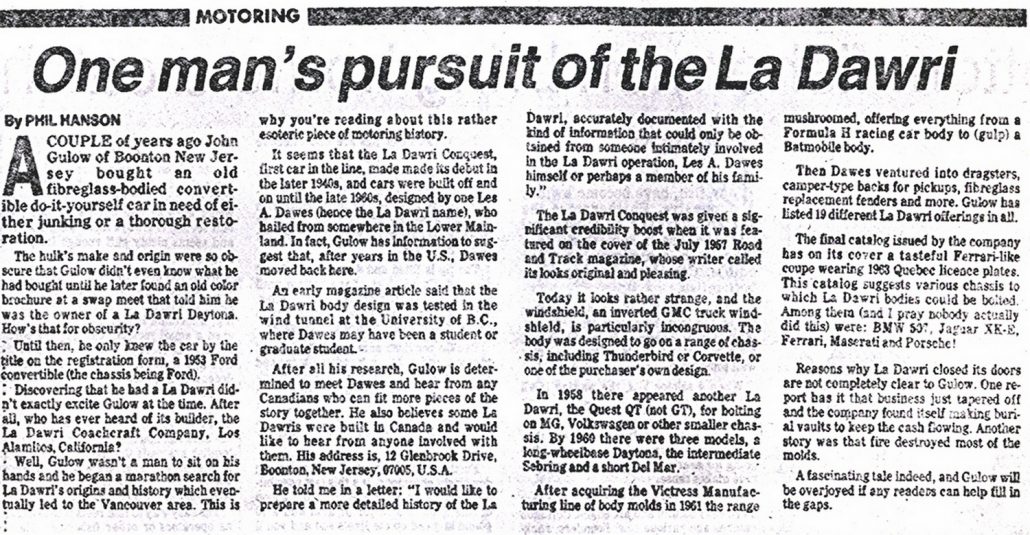 “One Man’s Pursuit of the La Dawri”
“The Vancouver Sun”, Tuesday, August 12, 1980
“Motoring” column of the “Outdoors” section
Written by: Phil Hanson

A couple of years ago John Gulow of Boonton New Jersey bought an old fiberglass-bodied convertible do-it-yourself car in need of either junking or a thorough restoration.  The hulk’s make and origin were so obscure that John Gulow didn’t even know what he had bought until he later found an old color brochure at a swap meet that told him he was the owner of a La dawri Daytona. How’s that for obscurity?

Until then, he only knew the car by the title on the registration form, a 1953 Ford convertible (the chassis being Ford).  Discovering that he had a La Dawri didn’t exactly excite Gulow at the time. After all, who has ever heard of its builder, the La Dawri Coachcraft Company, Los Alamitos, California?

Well, Gulow wasn’t a man to sit on his hands and he began a marathon search for La Dawri’s origins and history which eventually led to the Vancouver area. This is why you’re reading about this rather esoteric piece of motoring history.  It seems that the La Dawri Conquest, the first car in the line made, made its debut in the later 1940s, and cars were built off and on until the late 1960s, designed by one Les A. Dawes (hence the La Dawri name), who hailed from somewhere in the Lower Mainland. In fact, Gulow has information to suggest that, after years in the U.S., Dawes moved back here.

An early magazine article said that the La Dawri body design was tested in the wind tunnel at the University of B.C., where Dawes may have been a student or graduate student.  After all his research, Gulow is determined to meet Dawes and hear from any Canadians who can fit more pieces of the story together. He also believes some La Dawris were built in Canada and would like to hear from anyone involved with them. His address is, 12 Glenbrook Drive, Boonton, New Jersey, 07005, U.S.A.

He told me in a letter: “I would like to prepare a more detailed history of the La Dawri, accurately documented with the kind of information that could only be obtained from someone involved in the La Dawri operation, Les A. Dawes himself or perhaps a member of his family.”

The La Dawri Conquest was given a significant boost when it was featured on the cover of the July 1957 Road and Track magazine, whose writer called its looks original and pleasing. Today it looks rather strange, and the windshield, an inverted GMC truck windshield, is particularly incongruous. This body was designed to go on a range of chassis, including Thunderbird or Corvette, or one of the purchaser’s own design.

In 1958 there appeared another La Dawri, the Quest QT (not GT), for bolting on MG, Volkswagen or other smaller chassis. By 1960 there were three models, a long-wheelbase Daytona, the intermediate Sebring and a short Del Mar.  After acquiring the Victress Manufacturing line of body molds in 1961 the range mushroomed, offering everything from a Formula II racing car body to (gulp) a Batmobile body.

Then Dawes ventured into dragsters, camper-type backs for pickups, fiberglass replacement fenders and more. Gulow has listed 19 different La Dawri offerings in all.  The final catalog issued by the company has on its cover a tasteful Ferrari-like coupe wearing 1963 Quebec license plates. This catalog suggests various chassis to which La Dawri bodies could be bolted. Among them (and I pray nobody actually did this) were: BMW 507, Jaguar XK-E, Ferrari, Maserati and Porsche!

Reasons why La Dawri closed its doors are not completely clear to Gulow. One report has it that business just tapered off and the company found itself making burial vaults to keep cash flowing. Another story was that fire destroyed most of the molds.  A fascinating tale indeed, and Gulow will be overjoyed is any readers can help fill in the gaps.