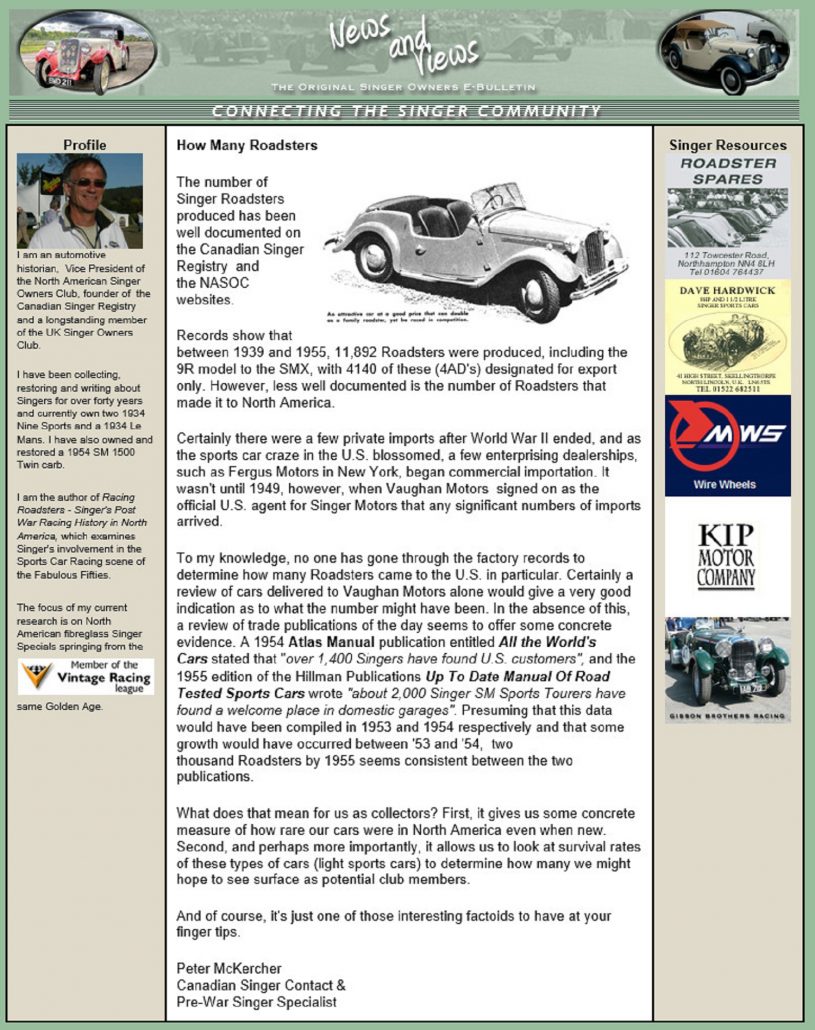 I’ve looked at some of my information and can come back on the production numbers that you have.

1/ A 1954 Atlas Manual publication entitled All the World’s Cars stated that “over 1,400 Singers have found U.S. customers”,

I think this number is reasonably accurate, and I think the 1400 Singers refers to the total quantity of post-war Roadsters imported into the States. My total of 4AD cars through Vaughan being 981 is very accurate. Prior to that, Vaughan would have taken something like 300 – 4A Roadsters, and before that I think it’s reasonable that Fergus Motors got 100 or so A-model Roadsters. There will be odd cars floating about, but I do believe the statement that “over 1,400 Singers have found U.S. customers”, to be fair comment and gives an honest impression of the total numbers of Roadsters imported into America. Note 1954 is after relations between Vaughan and Singers came to an end, so no more cars adding to this number until the Rootes era.

2/  the 1955 edition of the Hillman Publications Up To Date Manual Of Road Tested Sports Cars wrote “about 2,000 Singer SM Sports Tourers have found a welcome place in domestic garages”.
Well, Vaughan did not provide the number of 2000 SM Roadsters being imported into America, because he was no longer the agent, and in fact he had (in round numbers) only imported 1000 SM Roadsters. No-one took over the distributorship after him, (the Canadian agent did not do much) so this number stands.  So the 2000 figure must relate to a wider audience of Singer Owners. As the total quantity of SM Roadsters built was 3440, that 2000 figure represents well over half the total, which clearly is not the correct figure if you are assuming that this number entered the States. I’m guessing that at the time someone gave the answer of 2000 to Hillman Publications, that that was the total production that had been exported, (or alternatively total made) but when either of those dates was would need some further investigation but it would appear to be well before 1955.

So the “about 2,000 Singer SM Sports Tourers have found a welcome place in domestic garages” omits to tell us the date or explain the full circumstances. As mentioned, at the end of 1955 the actual number of SM Roadsters made was 3440, but obviously at some time earlier the figure quoted of 2000 would have been made. Is this what the publication means? or were they guessing? Did someone think that last year, 1954, Atlas quoted 1400 cars, so we will call it 2000 for our 1955 edition of the Road Tests?  But that was for a different set of cars.  So make of it what you will.

Trust that this is of some help.