Looking back at some of the early racing programmes in Southern California, a handful of names associated with Singer racing stands out. Wilbur “Lammy” Lamoreaux is perhaps the most notable, given his earlier successes as a World Speedway Champion. So too the Milne brothers, who had made their names in the same circles and closed out their racing and business careers with Singer roadsters.

Concurrently, a younger generation of Singer racers began to make their names on the SOCAL road racing circuits. Bill Kerrigan, of course, is notable for garnering Singers first significant wins in North America at the Reno and Palm Springs Road Races in the Autumn of 1952. He continued to drive for Monroe Gretske, General Manager of Vaughan Singer Motors, at major North American sports car racing venues such as Torrey Pines and Bridgehampton.  Dick van Laanen is well known to the Singer Owners Club as an early member of the Executive, as well as a founding member of the America Singer Owners Club. Next to Lamoreaux, he was probably the most notable and prolific.

A somewhat lesser known figure, but regularly winning Singer racer was Bob McDannold. His name shows up in many racing programmes spelled variously as McDonald, McDannald and McDannold, the latter being correct. 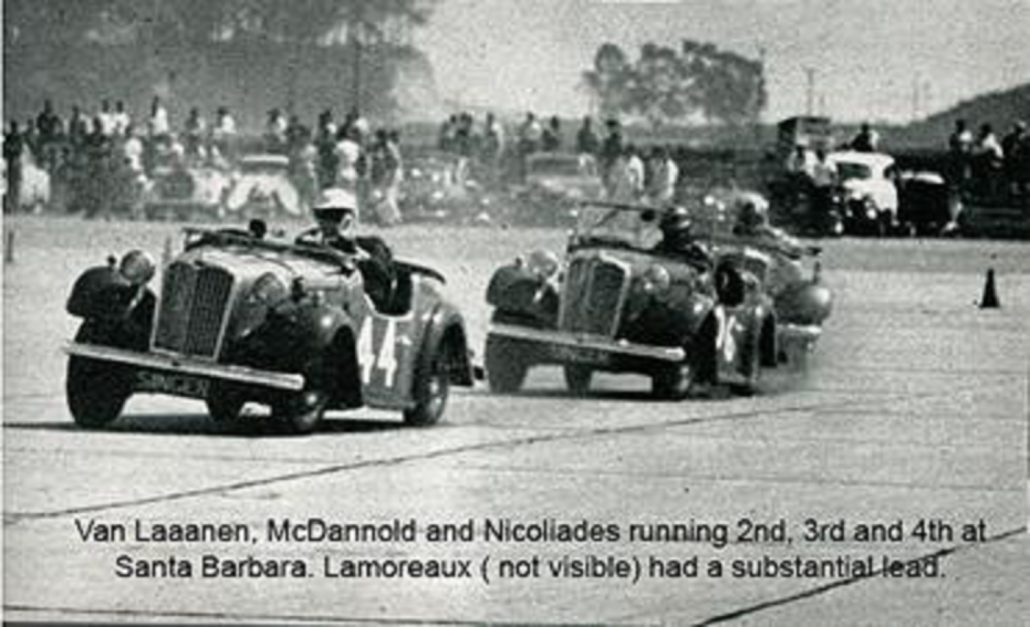 Robert “Jitter” “Red” Hurley McDannold was born on 12/2/26 in Kansas City, MO and moved to Phoenix Arizona with his family when he was 6 years old. He attended Phoenix Union High School until his sophomore year of high school when he enlisted under age in the Navy when he was just sixteen. He served aboard the USS Portland (“The Fightingest Ship in the Navy”) through the end ofWorld War II and would have seen some of the toughest action in the Pacific War at the Battle of Leyte Gulf, the Battle of Surigao Straitand the Battle of Okinawa. After leaving the navy he wore many hats including ASU Varsity athlete, teacher, coach, milkman, race car driver, Alaskan bush pilot and tennis court builder.

The Santa Barbara race was particularly notable, as Bob drove one of three Singers that swept the field. Lammy Lamoreaux was first, Bob second and Nick Nicoliades was third. Dick van Laanen, who had been running a strong second, would have added to the count if his car hadn’t given up. It was a wonderful day for Singers in Southern California.