I love mystery cars.  Seems like lots of you out there do too.  I think that’s a great thing…

I’ll continue to feature Mysterions – our name for mystery cars – throughout the year, and I thought we would add another one I found on Ebay a few years ago out in Denver Colorado to the gang…

Mysterions are named so because they come with no history.  Or shreds of history suggesting their past.  Sometimes you can find bits of information on the cars in terms of how they were built and items embedded in the body and chassis.  One such car I found in Orlando Florida had a license plate hammered into the firewall to identify the date it was built.  Very strange, but true.  I’ll see if Darren Swanson will feature his car in these pages soon, and he can tell you the story about how he determined the exact year his car/body was built.  But that’s for another day.

Mysterions were built, in the majority, by backyard or unknown builders.  As such, the good ones are balanced in design and construction, and the ones that leave a bit to the imagination – not so.  Often there are one or two features of a Mysterion which are questionably done.  But…overall they can be right on the mark – and fun to look at.  Hence…the Mysterion I found on Ebay several years ago that I now call the “Studebaker Stilletto”.

This was a neat project for the people who did the car.  I was told that a father/son team had built it, but it was abandoned and towed to a junk yard.  That was told to me by the seller on ebay – the junkyard dealer.  All research I did – did not result in any further information and that’s the shame of Mysterions.  They were the dream of someone somewhere in time from someplace…but how do you fill in the details???  It’s like finding items from an archeological dig – at a garage sale with no history.  Worth saving, and yearning for the real history of the items to unfold.  But just whispers of details from the past….

Rik Hoving actually passed me the information on the car and as I recall, I was the high bidder at $294.  Transportation back to Tampa was $500, and part of the front right fender disintegrated during the trip.  But it made it without much more damage.  I love the front end design of the car. The car has a certain appeal – if you kind of unfocus your eyes a bit.  I think it was inspired by the design of Brooks Steven “Valykyrie” of which I posted a picture below.  The interior was nicely done, the front end had appeal, but toward the back…not so much (politely).  It was based on a Stude chassis, some Stude interior parts, and 6 cylinder Stude Flathead.

Not many cars used these components and for this reason alone…the car has appeal.  So…I’ve been experimenting on what to do with the car.  I know that I couldn’t fix it the way it was…it’s ugly and pretty – simultaneously.  But keep in mind..as you restore these cars from back then…some are easy to restore and sometimes you have to help the original builder / designer out a bit to achieve what they were looking for.  I think this falls in the latter.

So…plan #1.  Let’s fix the car (in theory) with photoshop and see what we get.  To do this, I brought in my good friend Jeff Allison, who is a designer and artist up in the NorthWest.  Jeff loved the idea and proposed we do a few things to the car.  First…he moved the front axle forward.  Next…he added a styling line on the side that would make the shape of the door more appealing.  Finally…he completed the Studebaker theme with Stude hubcaps and a nice hardtop too.  Interesting proposal here with other design elements included, and much nicer looking car.  You can see these in the Photoshop images showing the original car at the top of each image and the photoshopped car at the bottom.

But….let’s take it another step further.  That is…Plan #2.  Let’s see what we can design based on the original concept, but having some fun with it.  To this end, Jeff did a magnificent job and put together renderings / drawings in color of how the car could be completed – if we built it from scratch.  What a fantastic car this would be!  It looks just like it should have been built – back in the day.  A concept car par excellence…

So…where does this project stand?  Not sure at the moment…I love the car, and the idea of what it might become, but like most of you…projects take time and money.  We’ll see what holds out for this, but what a great looking car would result in the end.  My main point is that many cars out there – especially from the period of the 1950’s that were home built – deserve a second chance.  Some just need to be restored, but some deserve to be saved – and then some.

I thought I would share one tale of another Mysterion for you to chew on a bit….and look forward to any comments each of you may have on the Fiberglass Forums. 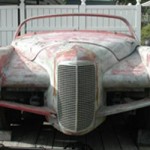 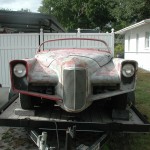 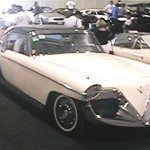 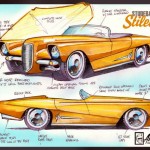 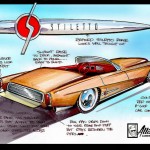