We are still in the process of documenting the background of the Aerocon Boa.  The principle was David Saunders, an English aerospace engineer.  In the early 1970’s, Saunders moved to Canada following time spent at the DeHavilland Aircraft Company.  In the early 1970’s he established a company in Manitoba, Canada to modify and develop DeHavilland aircraft.  The aircraft produced were call Saunders  XX.  Difficulty in meeting US regulations saw the demise of this Saunders XX Company in 1976.

David Saunders career focus turned to cars and the production of the Boa within the Aerocon company.  Information on company formation and the funding of the Boa project has not been gathered at this time.  Saunders’ Aerocon Boa used sophisticated techniques and materials to produce a light weight, high tech sports car for the general public.  He also incorporated readily available suspension components from other manufacturers:  Triumph Spitfire front suspension and VW rear suspension components.  This is typical of small manufacturers as they wish to avoid the tooling costs.  Saunders had plans to build upwards of 200 units per year.  However, as noted above, 15 units appear to have been made.

The Boa and 1st generation (1979-1985) Mazda RX-7 were quite different mechanically but have distinct similarities in body style. Lights both front and rear looked different although rear lights are not seen in attached pics. Most obvious, the Mazda had hidden headlights versus the Boa’s boldly visible horizontal layout. Other primary distinctions appear to be the Boa’s windshield had less curvature, and the Boa either had bigger diameter wheels/tires necessitating larger wheel openings or its overall body height was lower (the Boa’s wheel openings are closer to the top of the front and rear fenders). The Boa appeared to be more slender, while the RX-7 for greater market appeal needed a body shape that made the car relatively easy to live with.

Because the Boa was more expensive than the Mazda RX-7 and had a less exciting engine (presumably resulting in a lower level of performance), a prospective Boa buyer at the time might have overlooked its sophisticated chassis. 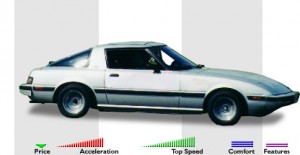 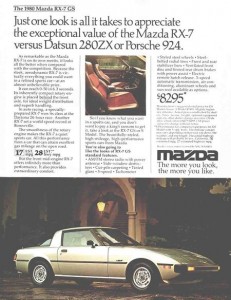 Guy and I had already noticed the striking similarity between the first generation RX7 and the Boa.  For comparison, The RX7 gen. 1 has a 95 inch wheelbase and 13″ wheels.  It also is about an 1.5 inches taller and wider.

The sides of the Boa are much more round in section and have some of the aviation/ space buggy design influence though it isn’t readily apparent in the photos (except maybe in the direct head on view).  The rear of the Boa is quite obviously designed for a mid-engined car , with Ferrari 308/512BB overtones, but the front could also be completely appropriate for a front engined special.  It would be interesting to park a Boa next to a Ferrari 308 and then next to an RX7  for photos for the web site.

The RX7 was actually introduced in 1978 ( it may have been a ’79 model ), and is a period correct engine possibility for the Boa.  Countless sand rails now use RX rotaries mated to VW transaxles, and several companies offer complete swap kits.  This could be interesting if a Boa ever materializes without an engine.

Lastly, the Boa was actually quicker than even the 79 RX7-S model.  and got better gas mileage due to being 700 to 800 lbs. lighter.  I’m certain the Boa handles significantly better as well.