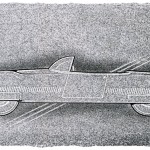 Here’s A Simple Side Profile Of A Sakhnoffsky Design That Utilizes A “Bubble” Windshield. This Is Four Years Ahead Of The “Wrap Around” Windshield That First Appeared On The 1953 Corvette.

A number of you called / wrote in and asked for a bit more about “The Count,” and I’m happy to oblige.  I’ve been collecting materials on him for years, and if we have a willing audience, then let me share, share, share.

I imagine if you’re starting a venture like a magazine, you bring in all the “big guns” for the first few issues.  Hopefully, the first few years.  I’m sure that’s what Robert R. Lindsay and Robert E. Petersen were thinking when the assembled their cast for creating “Motor Trend” with particular emphasis on who would write for issue #1.

The first issue was only 30 pages long, and had only 7 authors.  Among these names were folks like Griffith Borgeson, James Potter, Marvin “Mark” Wallach (close friend and another friend of fiberglass), and Count Alexis de Sakhnoffsky.  That should give you a sense of whom Robert Petersen et. al. were thinking of when they brought together their team to help make Motor Trend a success.

Sakhnoffsky’s Column:  Trend of the Future

“The Count” penned several articles starting with the first issue of Motor Trend.  His first column was titled “Trend of the Future” and it appeared each month with new designs of interest to the public.  Here’s how his first designs were introduced to the Motor Trend faithful: 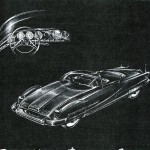 Here’s The Same Design As Seen From The Front. Beautiful Instrumentation Is Well-Planned For Car.

“Trend of the Future

On the following two pages, Colonel Alexis de Sakhnoffsky presents his version of the coming trend in automobile styling.  Many readers will recall his futuristic designs presented several years ago in Esquire magazine.

Some of the more important features of this design are the following:

The instrument panel is composed of a large speedometer, a tachometer, and a matching round dial for other standard instruments.  The round buttons on the steering wheel spokes are blinker lights to indicate that gas or oil supply is low.  Center of the panel has a combined radio grill and round television screen.” 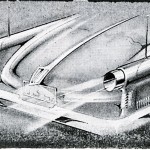 I Love The Term Used In The Article “Psychological Styling.” Here You See The Twin Exhausts – Set Above (I Believe) The Taillights Of The Car.

From time to time, I will be featuring the work of different designers – primarily from the 1950’s – because that’s where our vintage fiberglass designers often drew their inspiration.  Not just what was in shows, but what was being shown in magazines.

Designs, concept cars, and custom cars from across the world influenced the folks who would ultimately design their own cars and build them out of…..fiberglass.  To this end, I’ll feature designs that I hope you will feel are interesting, as well as additional work from Count Alexis de Sakhnoffsky.

Oh….and by the way.  Alexis was a “Count” by Russian birthright. However, during WWII he returned to Russia as an Air Force Major with the US Military Mission in Moscow, and over the course of the war rose to the rank of Lt. Colonel.  Hence, you see his name as either “Count Alexis” or as in the Motor Trend articles (which appeared immediately after WWII) as “Colonel Alexis.”  Probably more information than what you were looking for.  *wink* 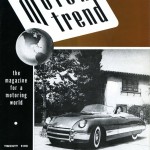 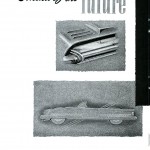 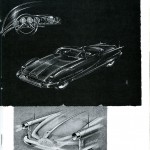 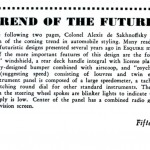 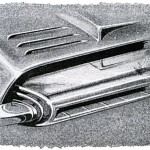 Here’s A Simple Side Profile Of A Sakhnoffsky Design That Utilizes A “Bubble” Windshield. This Is Four Years Ahead Of The “Wrap Around” Windshield That First Appeared On The 1953 Corvette.

Here’s Another Design That Appears In This Article With A Similar Windshield. Beautiful Instrumentation Is Apparent In This Design.

I Love The Term Used In The Article “Psychological Styling.” Here You See The Twin Exhausts – Set Above (I Believe) The Taillights Of The Car. 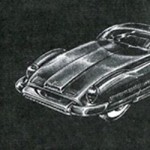