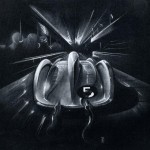 The Count’s Drawings And Design Epitomize Speed In Every Way. I Wonder Where This Original Design Is Today?

Those of you who are faithful readers of Forgotten Fiberglass, know how much Rick D’Louhy and I (and now Bill Fester of Houston, Texas), have come to appreciate the legendary designer and stylist Count Alexis de Sakhnoffsky.  I’ve written about him several times and even now have a category of stories on our website dedicated to his writing and designs.

Today’s article is no different.  Today we’ll review a story written by “The Count” on his thoughts on “design” and how it was influenced by one’s sense of “speed.”  Why, might you ask, would I include thoughts from a designer smack dab in the middle of our Forgotten Fiberglass website?  Good question.

“Fiberglass” was the catalyst for making young designers’ minds burst forth.  Now, with talent, effort, and enthusiasm, young designers (and those young of heart too) could create a design on paper and translate it to a buck, mold, and finally body.  Prior to the use of fiberglass, you would have to employ a metal-shaping shop and create a metal – or most likely aluminum body.  That was a daunting task for anyone with a modest (or normal) income.

The sky was the limit for this brave new group of individuals, and the men and women who built the fiberglass body and sports car companies we have come to appreciate (Glasspar, Victress, Woodill Wildfire, Allied, Venus, Grantham Stardust, Meteor, Bangert, Chicagoan, etc…) were the ones at the head of the field.

This was the big time gang.  In fact, this was the inaugural year of the “International Motor Sports Show” of 1952.   It was held in the Grand Central Palace in New York City, and lasted just over a week.   Three distinguished judges were chosen for the event:

These are men at the top of their game and legendary designers of their own day (and now beyond).  The Advisory Committee was chaired by Herb Shriner and included folks such as Dave Garroway, Jackie Cooper, Ken Purdy, Mel Torme and other distinguished guests.  Car shows in 1952 are not what we think of car shows today – and this was one of grandest of all.

Sakhnoffsky’s article appeared in the nearly 50 page program prepared for the show.  It was one of the first articles in the program and no doubt was read by thousands of folks who attended.  “The Count” was visionary in his thoughts on design and a star attraction too. 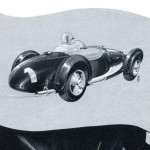 So….let’s meet the count – and don’t be too scared of his intimidating visage that appears in the story.  He had quite a “dramatic” look about him – but so did his cars – which is a good thing for all of us to appreciate.

What is this thing called speed?

Few among those who enjoy it will venture to define the thrill which speed gives them.  Bobsled pilots claim that the thrill of this sport consists of traveling at over 80 mph, with an all-time knowledge that you cannot stop.  Fighter pilots indulge in “buzzing” or landing their ships at unnecessary high speed for the sheer “kick” which they get out of it.  Does it bolster their ego?  Does it give them relief from an inferiority complex?  Or is it an outlet for the bravado instinct, which can be found in all of us?

Opinions of psychologists, who study reactions of men who enjoy the excitement of flirting with death, are divided.  They report such sensations as:

“The exhilarating feeling of a powerful machine throbbing beneath you…”

“The thrill of being in control of your life and death…”

Whichever facet of this fascinating vice fits you, you know you will always continue to indulge in it and will consider being called a reckless madman an unthinkable affront.  This is a close affinity between those who enjoy this “flat out” feeling” and the relatively few who can capture the illusion of speed on paper. 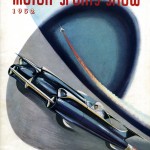 The 1952 International Motor Sports Show Was One Of The Top Automotive Events of Its Time. The Glasspar G2 Bodied “Vaughan Singer” Built in Collaboration With Bill Tritt Debuted At This Event in 1952.

It is impossible to convey the full measure of fast movement with pencils, brushes, and paint.  But artists, who have been blessed with the opportunity of handling a thoroughbred at 100 plus, retain an eternal imprint on their output, which cannot be easily erased.

To draw sport cars, you have to be deeply conscious of what is mechanical beauty.  There is something human in the appeal of a custom-built creation.  After driving fast cars, a motor artist discovers that as he becomes more mechanical, the magnificent beast is becoming more human.  The tapered highlights on its metal skin are reminiscent of taut, young muscles under an athlete’s sweaty skin.

What makes a car look fast?  Naturally there are such elementary features as lowness, length of hood, etc.  These are “musts” in a speedy silhouette since they are directly related to air resistance and feeling of power.  Psychological styling adds details which suggest, by inference, thoughts related to speed.

For instance, a large tachometer does not add a single extra mile to the top speed of a car, but reminds one of the oversized revolution counters observed on Grand Prix jobs.  Tiny, short gear-shift lever “reeks” of lightning gear changes, and rows of louvers symbolize a high performance engine.  An oval grille brings to mind Ferraris and Maseratis and a honey-comb air intake the roar of an SSK.

There is a wealth of inspiration for a designer in a close study of characteristic features of real racing cars, in which power-bulges are not molded by phony stylists, nor port holes added to identify a new model.  Some of these details are authentic elements of a modern sports car design, but a seasoned designer will use them sparingly, as an experienced chef, who accents his creations with mere dabs of spices.

What are forecasts for fashions in the sports car field?  Who copies whom in this industry?  There is a peculiar anomaly among style trends of today.  We can see Detroit stylists adopting simplified, functional shapes favored by European designers, while on the other hand, original American style features are being beautifully interpreted by Italian craftsmen.  Such names as Farina, Vignale, and Ghia are fast becoming as well known as the reputed Saoutchic and Figoni & Falaschi.

There is no doubt, however, that the tussle for supremacy in sports car design is confined to Britain and Italy.  British leadership, with classic but “passé” designs, is being seriously challenged by pure, exciting lines of the latest creations from Milan and Turin.

Let us hope that the timid steps taken by Detroit manufacturers in unveiling a few prototypes of U.S. sports cars will result in an ultimate style leadership.  The enthusiasm of American sportsmen should outweigh indecision and production consideration.

If you’ve made it thru “The Count’s” entire article above, you can see why I’m a big fan of his.  He was able to translate effectively the mechanics and styling of design into words, and this has heightened my appreciation for the designs of the time – and the man known as “The Count.”

The 1952 International Motor Sports Show Was One Of The Top Automotive Events of Its Time. The Glasspar G2 Bodied “Vaughan Singer” Built in Collaboration With Bill Tritt Debuted At This Event in 1952. 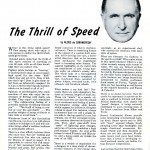 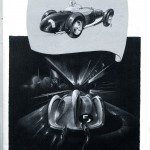 The Count’s Drawings And Design Epitomize Speed In Every Way. I Wonder Where This Original Design Is Today? 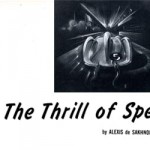