Here at Forgotten Fiberglass we are always looking for “the smoking gun” – the “Rosetta Stone” that will allow us to peer into the past with perfect accuracy and understand the history of a company like never before.  Recently, that happened and the result was great news for two companies we celebrate:  Clearfield Plastics and American Enterprises.

In our late night / early morning searching thru newspaper archives and investigating – things that generally keep me “single,” I came across the article below that spells out what business was coming to a close (American Enterprises), and the birth of a new company – Clearfield Plastics.

Let’s have a look gang.  And with that…. we now have the birthday of….Clearfield Plastics – late Spring of ’54.

A new industry for Clearfield – to be known as Clearfield Plastic, Inc. – has begun to set up its equipment in one of the former tannery buildings in East End.  The firm has been operating for the past five years at Stamford, Connecticut, under the name of Americana Enterprises.  Because of a more attractive labor market in this area, however, the company is in the process of closing its Connecticut plant and moving all its equipment to Clearfield.

Stewart Greenfield, president of the first, said the company will begin hiring personnel in about two to three weeks.  He said he expects between 30 and 35 persons will be employed.  Approximately half the number will be men, he said.

Specializing in the manufacture of reinforced fiberglass plastic, the company has been making plastic doors for insulated trucks that use refrigerated equipment.  It has recently expanded into the broader and rapidly developing field of reinforced plastic automobile and truck bodies, including fiberglass car tops, fenders and other parts of auto bodies.

Mr. Greenfield and Harry Heim, Vice President, have been supervising the transfer of equipment to Clearfield for the past 10 days.  As production expands, they plan to move into other adjacent building of the former tannery.

The company officers said the firm is also engaged in research into further uses of reinforced plastic and has also been doing some government contract work for the Air Force at its Connecticut plant.  Mr. Greenfield said his company designed and built the first reinforced plastic body for an automobile five years ago.  This type of plastic he describes as “harder than steel and lighter than aluminum.”

The rugged plastic doors for insulated trucks, one of the firm’s products in Connectivut, are made from fiberglass and Vibrin, a polyester resin produced by the Naugatuck Chemical Company, a division of U.S. Rubber Company.

The new industry for Clearfield was obtained through the efforts of Paul Ruch, Clearfield businessman, acting with the cooperation of the Clearfield Chamber of Commerce.  Mr. Ruch and Gerald Shurrer of Clearfield are members of the board of directors of Clearfield Plastics, Inc. 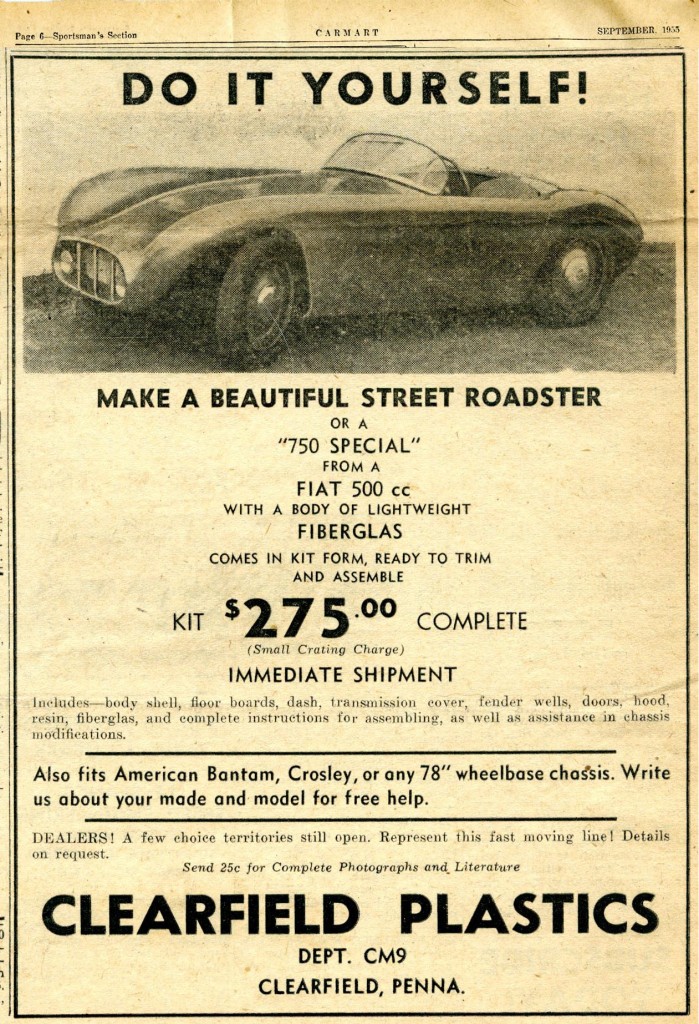 This Advertisement Appeared Over a Year Later Showing One Of The First Clearfield Plastic Bodies Built By Harry Heim and Clark Mitchell.

So we now know that Clearfield Plastics started in the Spring of ’54 and by May of the same year was hiring employees.  Interesting, good friend Clark Mitchell said that at about the same time, Harry Heim was putting the finishing touches his first fiberglass sports car – a car that was NOT part of the original Clearfield Plastics plan – although they certainly had their own interest in producing the earlier “American Enterprises” fiberglass sports car using MG mechanicals.

Interesting that Stewart Greenfield commented that he designed and built the first fiberglass bodied car five years previously.  The earliest I’ve found reference to this car is the September ’52 article in Road and Track magazine.  It could have been completed earlier, but we’ll need more confirmation for an older date.  Research continues…

In the ensuing year that passed after this article was published, many significant events occurred.  The first small wheelbase Clearfield plastics car was born, and by late ’56 / early ’57 two versions of this car would be offered by Almquist – the next company that Harry Heim partnered with in making his sports car dream a reality.

There’s quite a bit of history to share from Pennsylvania about Forgotten Fiberglass! 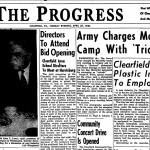 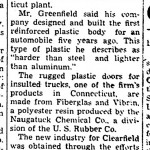 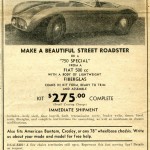 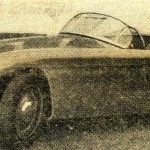 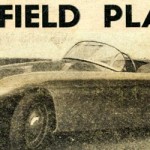