Did you know that here at Undiscovered Classics we also find, research, restore, show and sell one-off and limited production RV’s?  Actually, we didn’t know that either until one day I took stock when I went to our workshop and saw the image below.  I said to myself…..

Who would of thought!” 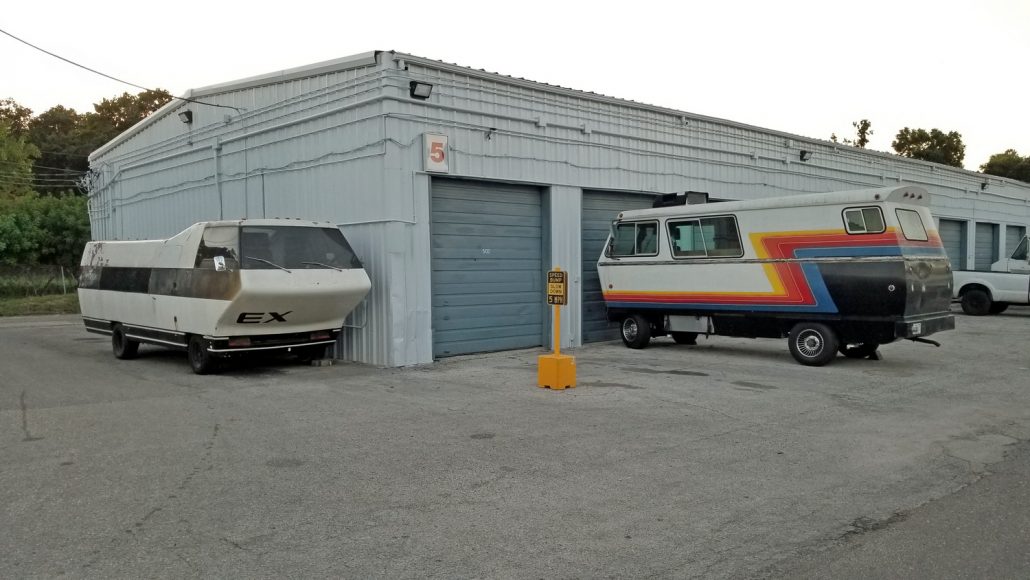 At left is our recently acquired 1975 Bucci Executive Prototype and to the right is the one-off Ferber Coach from Milwaukee, Wisconsin.

Going Back in Time

But I should have known better about my history with unique RV’s – and I did after thinking a bit more about our history.  Let me explain.

While Undiscovered Classics has its roots starting in late 2005, by March of 2007 we were already showing one of our first acquisitions – a restored 1957 LaDawri Conquest sports car at the Amelia Island Concours d’Elegance.  And that’s where I met Mick Walsh of Classic and Sports Car Magazine from the UK.

At the end of the show at Amelia, Mick had come by and was talking to us about the class of American Specials that Bill Warner of Amelia had just presented for the first time on the concours field.  Our 1957 LaDawri was one of them.  But Mick had also heard me talking about a recent acquisition – one that involved pulling together a crew to save a rare aluminum bodied, airplane engineered RV called an “Ultravan.”  Mick wanted to learn more. 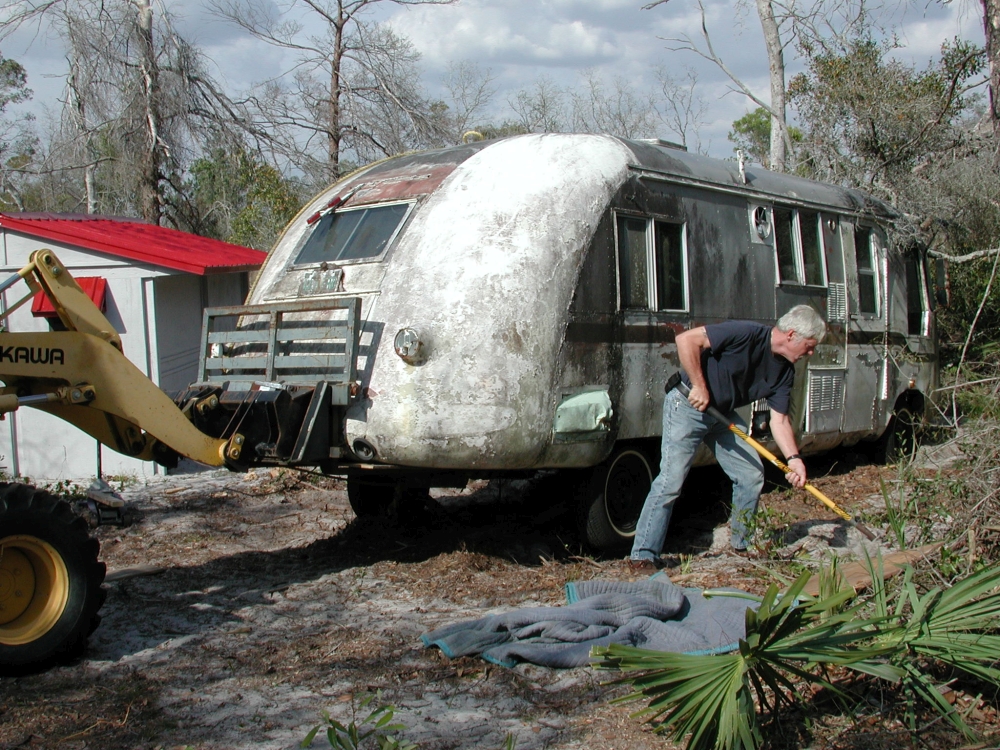 Photo from Spring, 2007 when we gathered a team of intrepid explorers and headed to the swamps of Sebring, Florida. The Ultravan was days away from heading to the scrapyard – or being pushed into the swamp – whichever came first. That just wasn’t to be and our crew saved the Ultravan and brought it home.

This was the beginning of when we were saving cars across the country but this was one big car – it was an RV.  The Ultravan Magazine wrote an article about what we did sharing photos too.  They ended the article with the following statement – something that was a harbinger of things to come for me:

“A man of more courage than I” 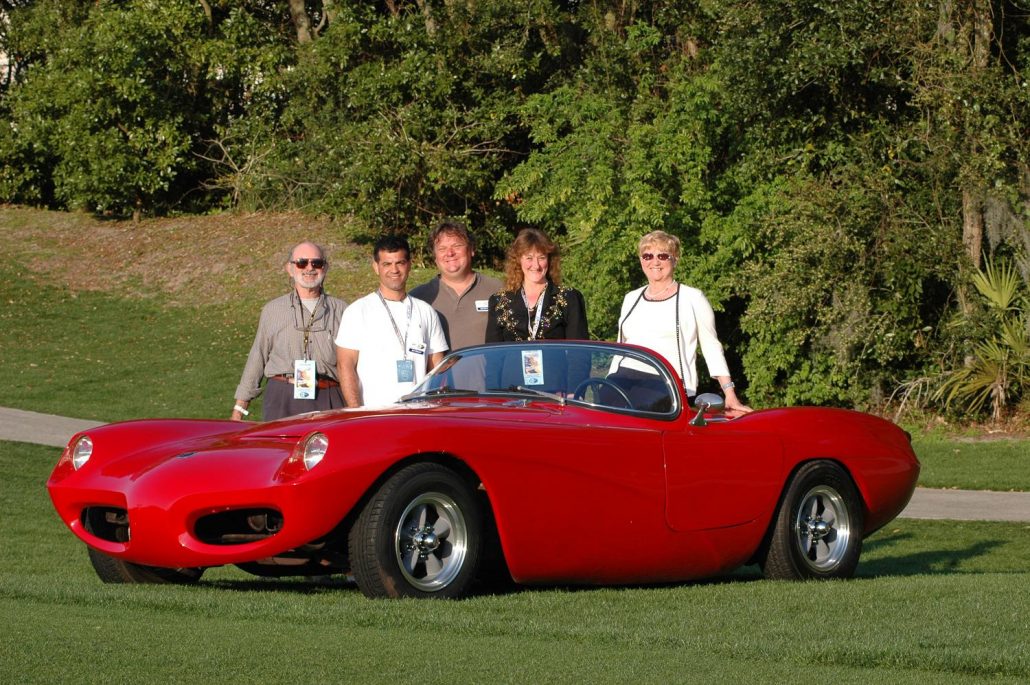 So Mick wanted to learn more about the class of fiberglass specials and we shared some time discussing this with him.  He also wanted to know about the Ultravan.  So “yes” we’ve been published several times in Classic & Sports cars concerning our acquisitions and restorations and concours events and our exhibitions and research projects too.

However….the first time we were published in any magazine was this story about saving an Ultravan – not any of our other stories or projects we’re known for – because it came before most of them.  Mick also described what I was doing in the hobby – and remember this was back in March, 2007 so we’re talking “months” and not “years” of saving cars in my experience.  In the article, Mick characterized me as…

“Hacker, savior of all types of arcane automotive Americana”

How right he was about to be – thanks Mick 🙂

So yes…the first published article of anything associated with Forgotten Fiberglass or Undiscovered Classics was about our saving an Ultravan.  And this leads me back to the statement that I started this article with:

Who would of thought!”

For those of you wanting a bit more reading, we are putting all publications involving Undiscovered Classics online to be shared.  We’re still working on this project, but here’s where we are at for 2007:

Click on the following link to explore the media archive from 2006 to Present and really spend too much time on the internet:

Welcome to the World of Ferber

So now that I’ve got you up to speed on our apparent interest in rare and unusual RVs, we can begin today’s story.  In 2016 Kyle Feller, Nancy Kent and I were off to see my friend Tom Devereaux who lives near in Apopka near the city of Mount Dora, Florida.  We were dropping off some parts I had borrowed from his LaSaetta sports car (more about that in a future story) and we pulled up to his shop and there it was – but I didn’t see it.

Nancy saw it.  Nancy and I have been friends for 30+ years and she wanted to know what it was.  She thought it looked cute.  I refused to look in that direction.  Too many things I’ve seen that are interesting end up finding their way back to my place so I didn’t look – until before we left. 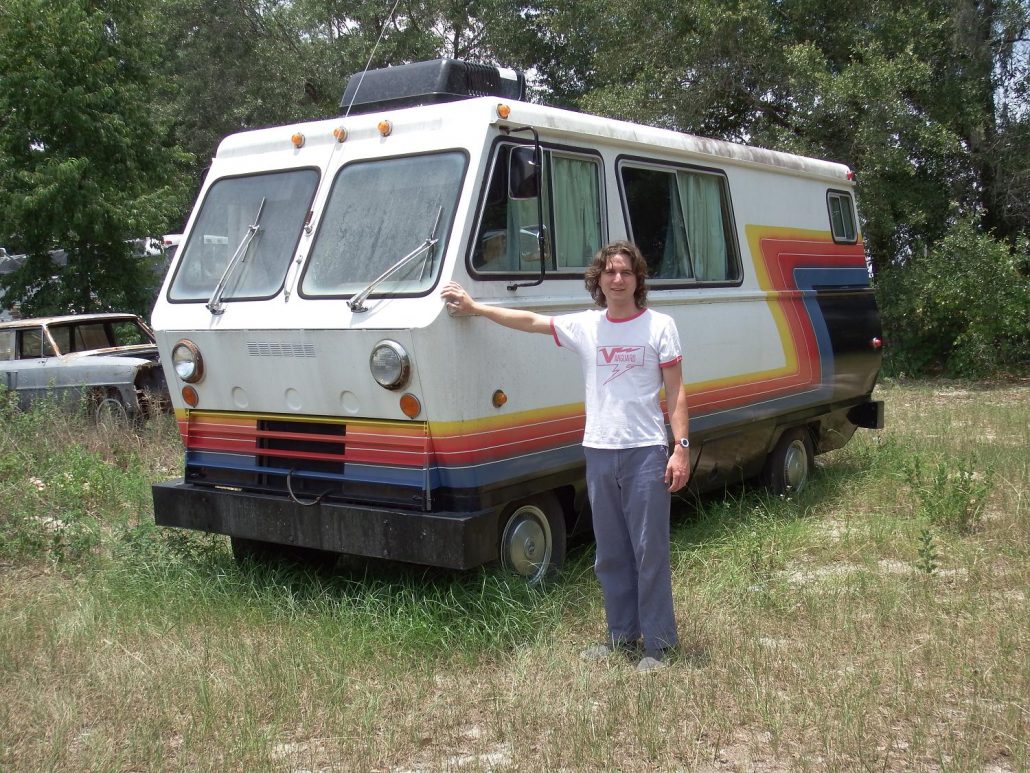 Kyle Feller With What Would Become our First Ferber Coach

Tom had painted the RV in 1994 and had found some unusual features. 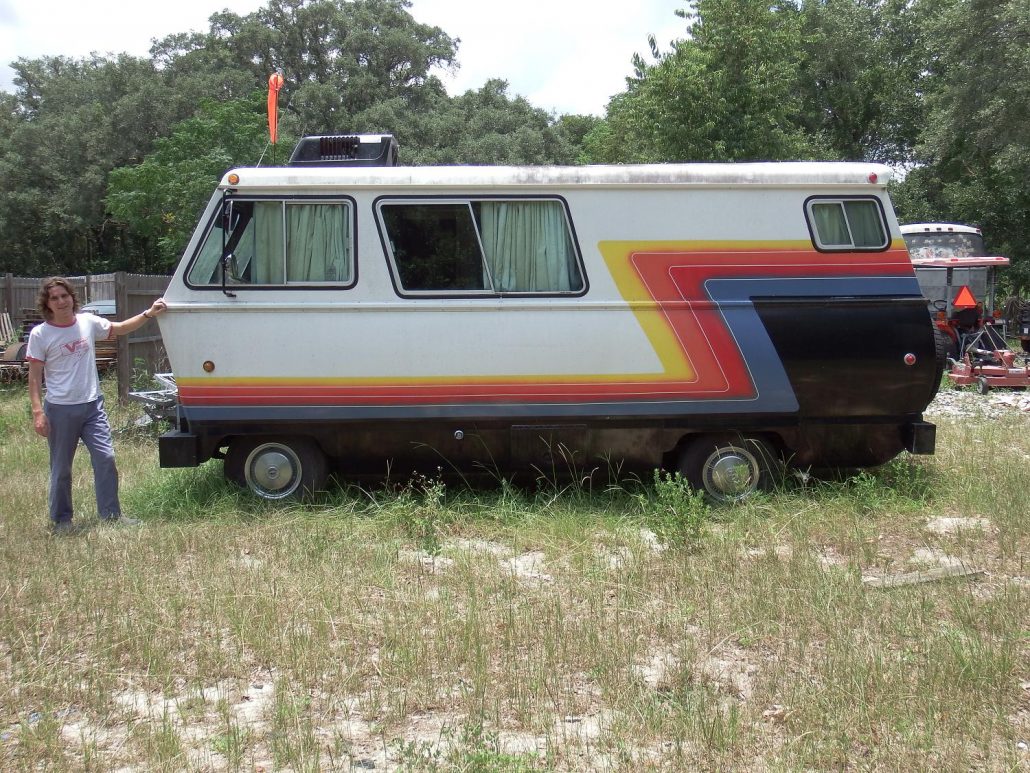 This RV was not what it seemed.  In 1971 all things RV were built from Fiberglass – my favorite material.  This RV was strong-as-ox and built of 1/8 plate aluminum.  And that led to the story that Dwight shared about his rig.  He only knew it was titled as a Ford but he said that he was told it was built for an executive in an aluminum company and it came from the midwest.

My favorite kind of story – one that requires research and that’s what I’m built to do.  So just as I feared when Nancy pointed in a direction that I didn’t want to look because I was sure I would like it – I made an offer on the spot and 2 weeks later Kyle and I were on our way to pick the RV up and bring it home. 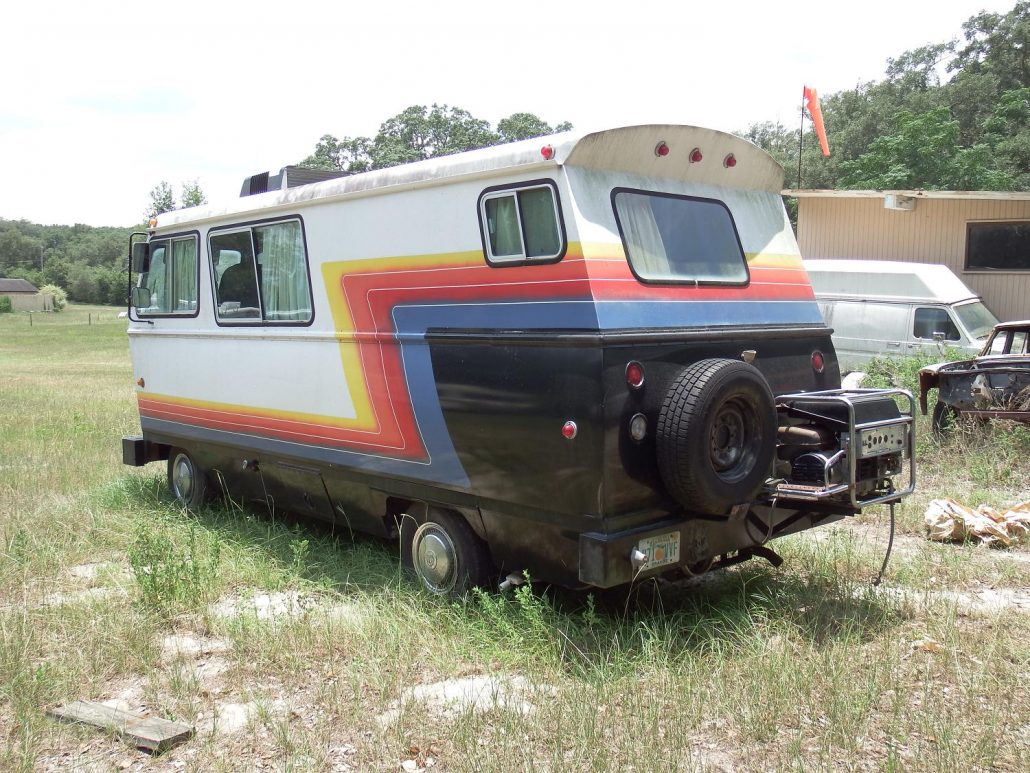 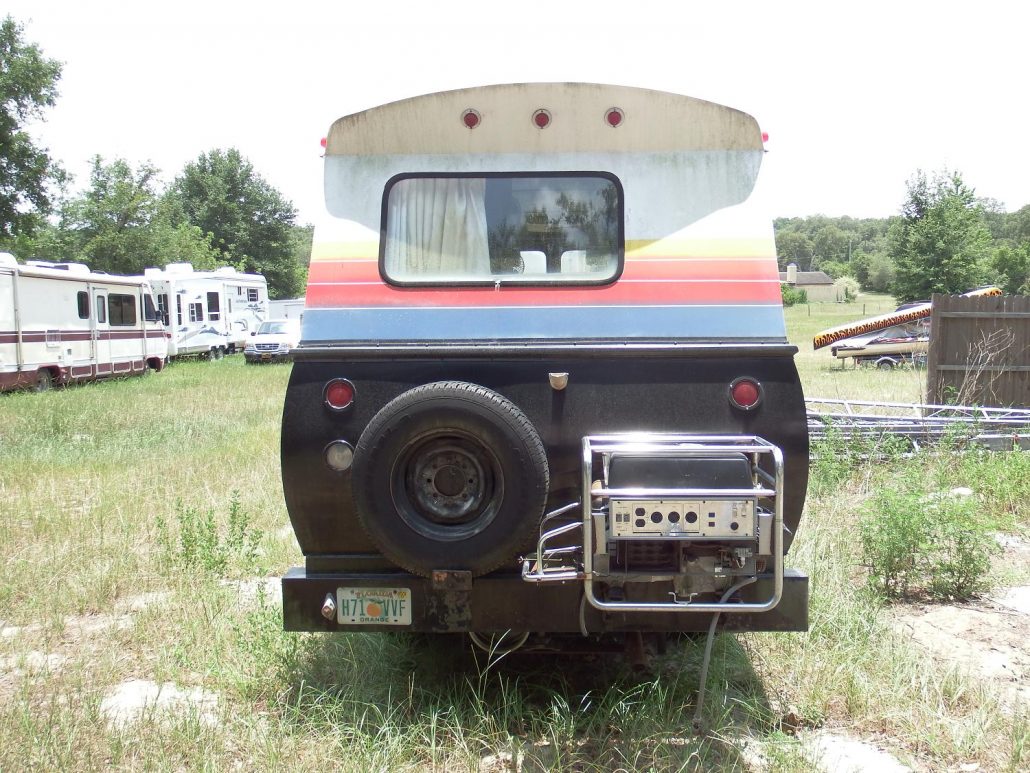 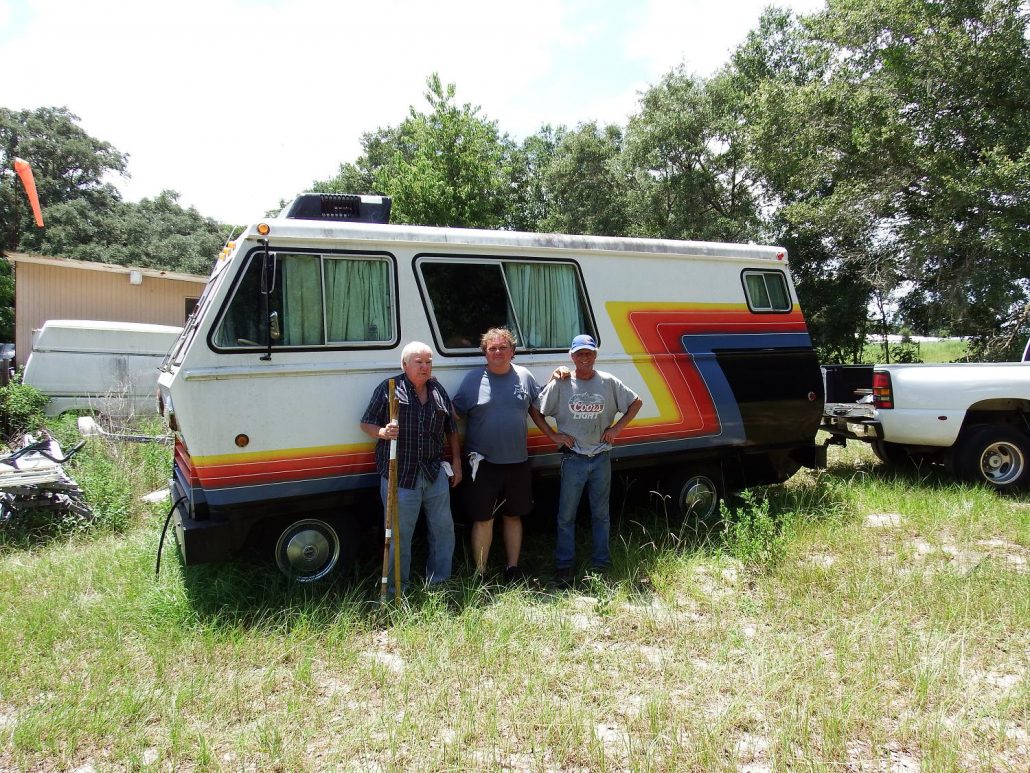 From Left to Right: Dwight Hellenschmidt, Geoff Hacker and Tom Deveraux – what a crew!

Have you ever noticed that there are no “brave” older people?  That’s because of what happens to the “brave” younger people when they do things that Kyle and I were about to do.  We took measurements when we were first there and returned two weeks later with our trailer – a very nicely made heavy duty trailer by “Imperial” in southern Illinois.

I love this trailer because it is far more sturdy than at first glance.  Truss frame design, torsion bar suspension…..it’s built for heavy loads.  But was it built to take a Ferber?  We were going to find out.  Of course when we started winching it up on the trailer – 3 wheels out of 4 rolled.  I told Tom….”we’ll come back and pick it up later.”  Tom said “oh no you won’t – it’s leaving today and I’m going to make sure.”   And Tom did just that.  Off came the wheel, off came the brake shoes on went the wheel and we were ready for the winch. 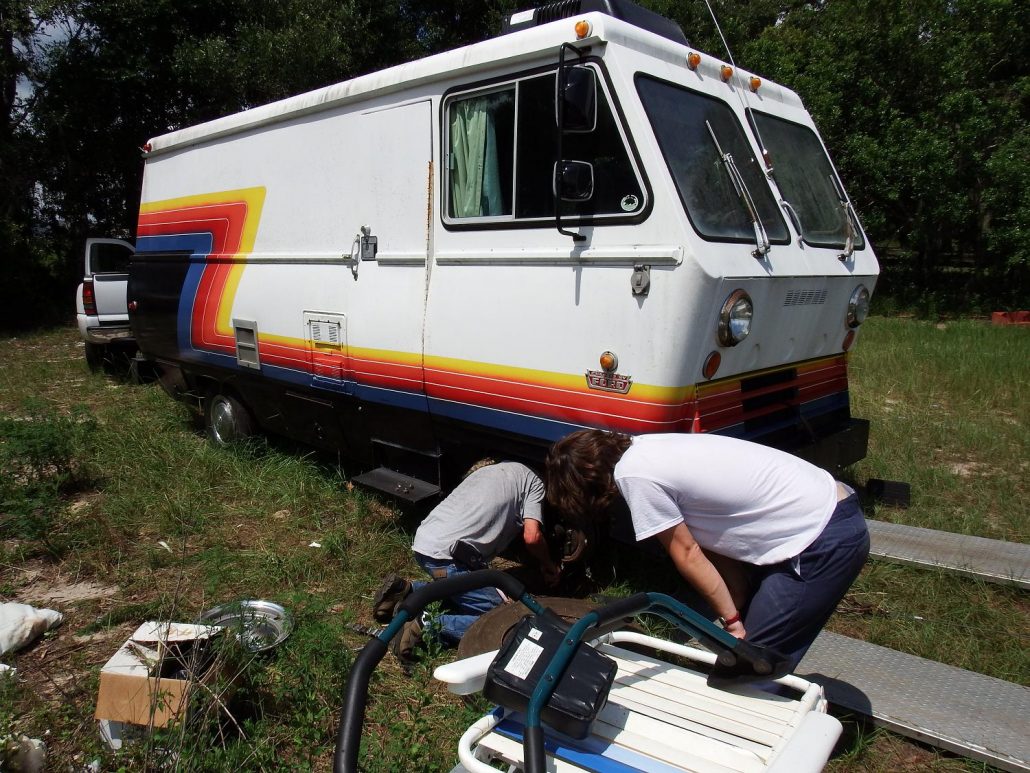 Tom Deveraux works on the front right wheel as Kyle Feller supervises. Great job team!  And if you notice…the ramps are ready and the trailer in place.

So….here we go shown in the photos below.  Onto and upward on the Imperial trailer: 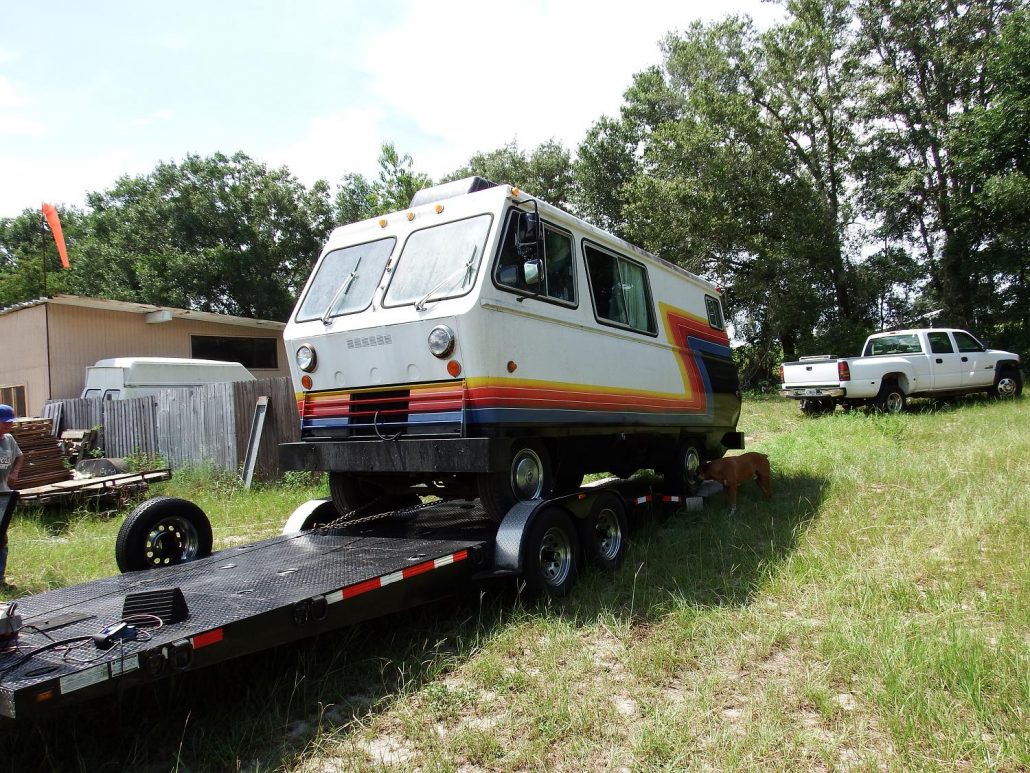 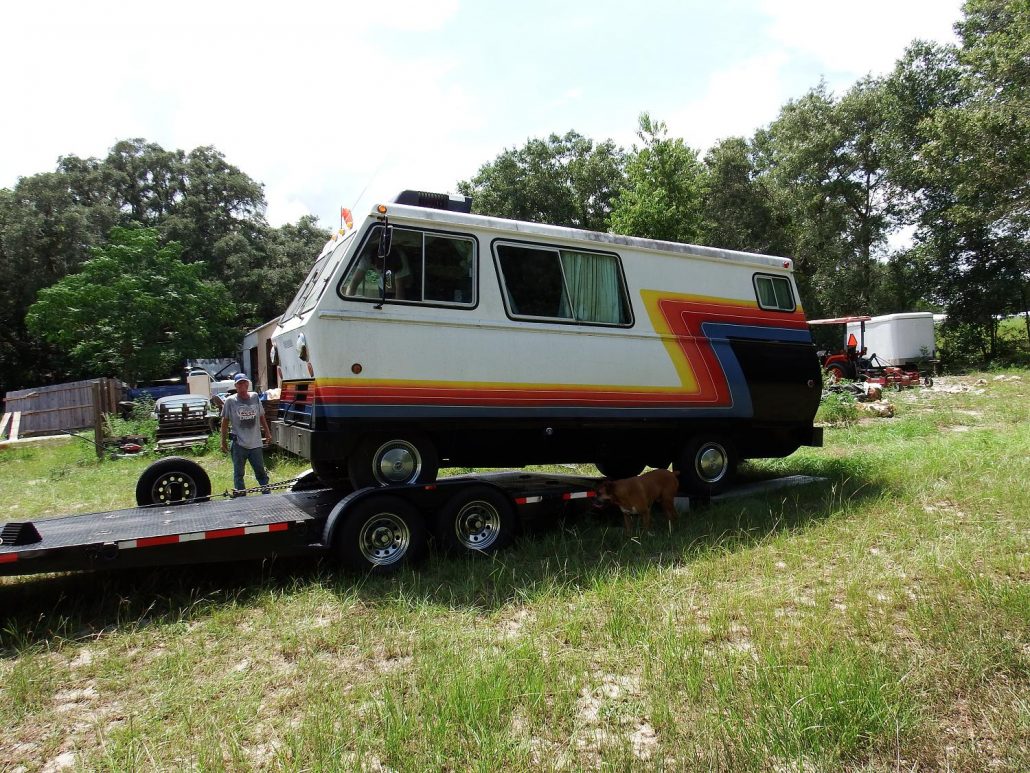 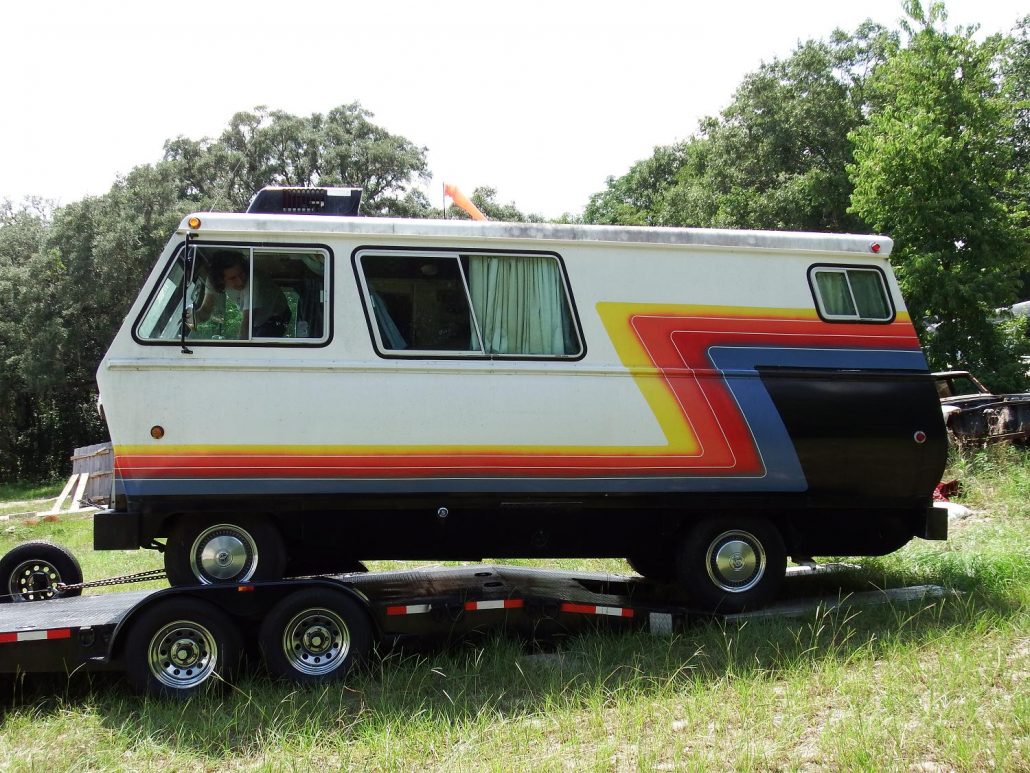 Off To See The Wizard (Ralph Smith)

You know there’s no final photo of it on the trailer because we were laughing so hard that it actually worked that we didn’t take any photos.  That meant we would test the towing of it next.  Remember that statement about about me concerning the Ultravan earlier – “A man of more courage than I.”  Well….I think the word “courage” could be substituted with many other words that would more aptly describe myself at times – like this time above.

So we strapped down the Ferber and I asked Tom to check the underside of the trailer for clearance between the axles and the trailer.  Tom said – “no problem here Geoff – the frame is sitting squarely on the suspension – you’re good to go.”

And so….it worked.  Eighty miles to go before we would be at our drop off point – Ralph Smith’s house in Valrico, Florida.  Ralph was going to start to work on it.  So we started driving.  The biggest thing we noticed is that you can’t take sharp turns fast.  It’s a really tall RV and I’m not used to towing them.  And it’s heavy – we estimate 7000 to 8000 pounds.  For reference, the Chevy Suburban towing it is about 5500 lbs.

Kyle and I learned that quickly and we’re talking about 20 mph around a curve.  We slowed down to less than 10 mph for any curve.  Luckily once we were on the main road, it would be nearly straight to Ralph’s house – a 70 or so mile Cannonball run – just without the speed.

So we start driving and my phone starts buzzing meaning I have notifications (not phone calls).  Some of our fans in Florida saw a crazy thing on the road being towed and were sending me photos.  Now it’s probably not a good sign that I’m being notified about someone towing a crazy looking vehicle.  That’s because – unbeknownst to them – I’m the guy driving and towing the crazy vehicle and I’m now reading their text and looking at their photo.  As in the Monopoly game, I should probably go straight to jail.

Remember Geoff….put the phone down when towing crazy vehicles.  Here’s one of the photos below that I received. 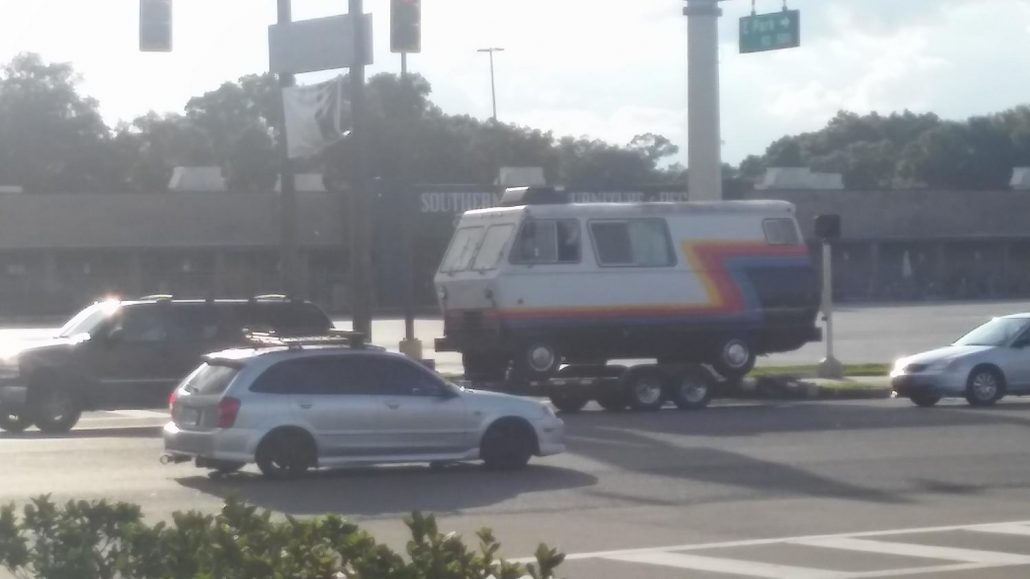 Yes…in a war against “size” – Ferber “1”  Geoff and Suburban “0.”  Here’s what it looked like in the photo below looking over the front of the Suburban and onto the Ferber.  When I was driving, all I could see out of the rear view mirror was the Ferber grille.  Very strange feeling. 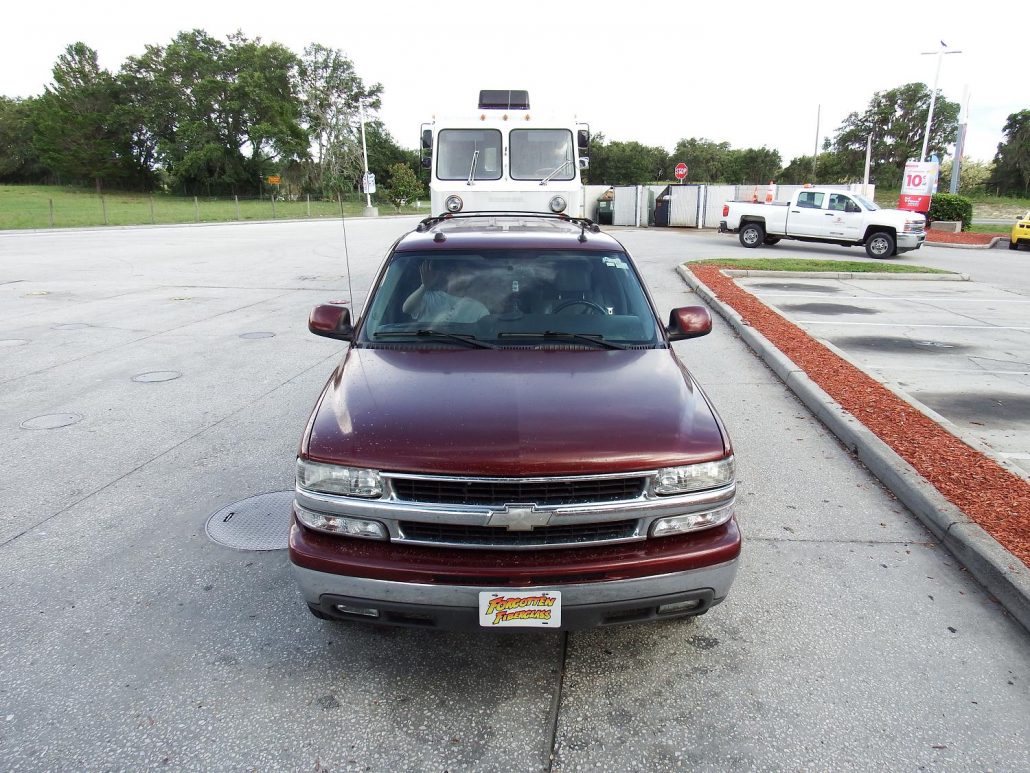 Can You See The Ferber Peeking Over the Suburban on The Trailer in this Photo? If you look closely, Kyle is praying in the passenger’s seat.

Here’s another photo below of how happy I was when we reached to 40 mile or halfway point of our journey to Ralph’s house. 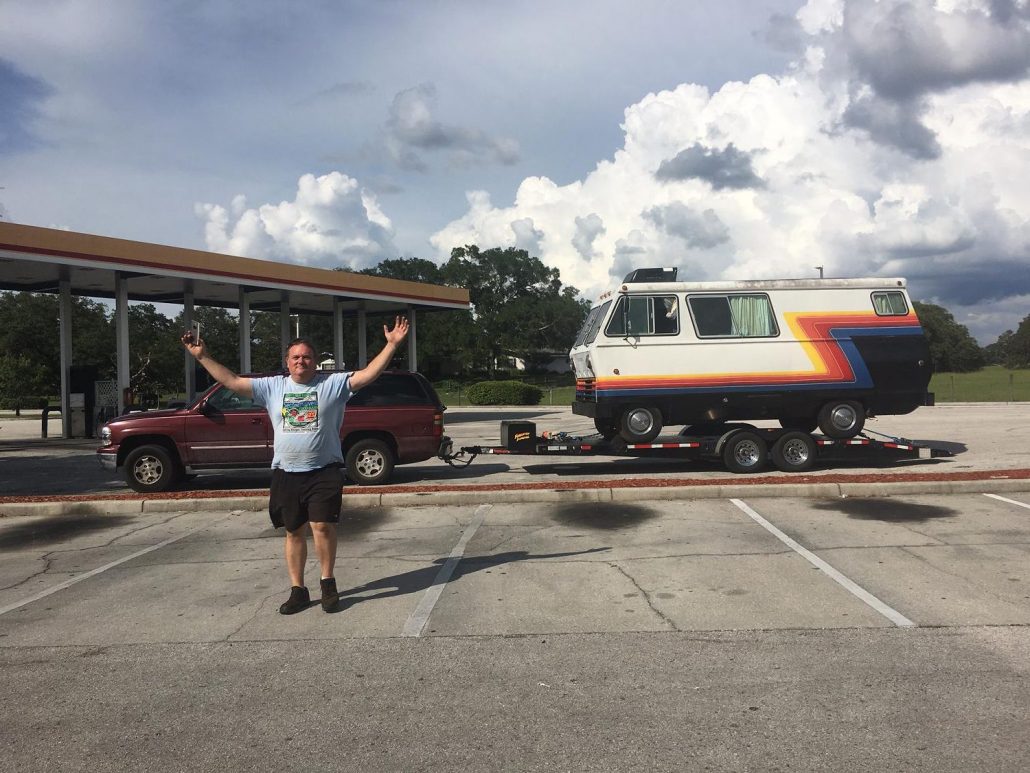 So we made it to Ralph’s.  No problems and I’m sure the only police that saw us during our “run” were laughing too hard to stop us or were hoping the authorities in the next county would do their job.  But we did it.  Shown below is Kyle at the wheel as we were slowing lower it on to Ralph’s property. 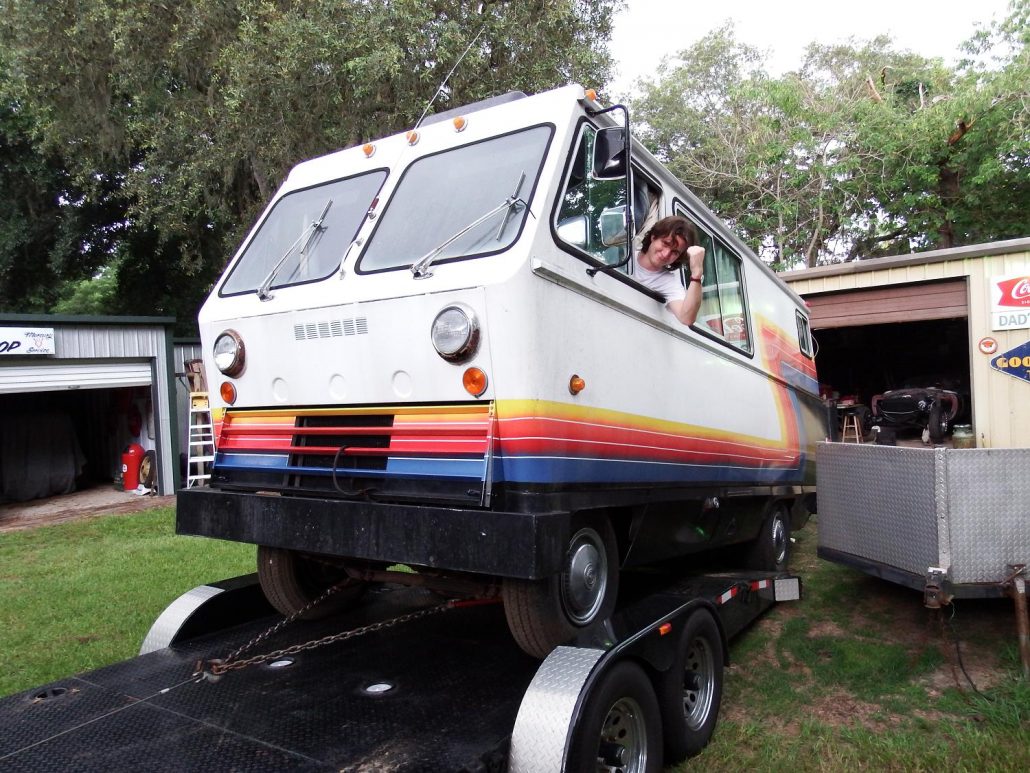 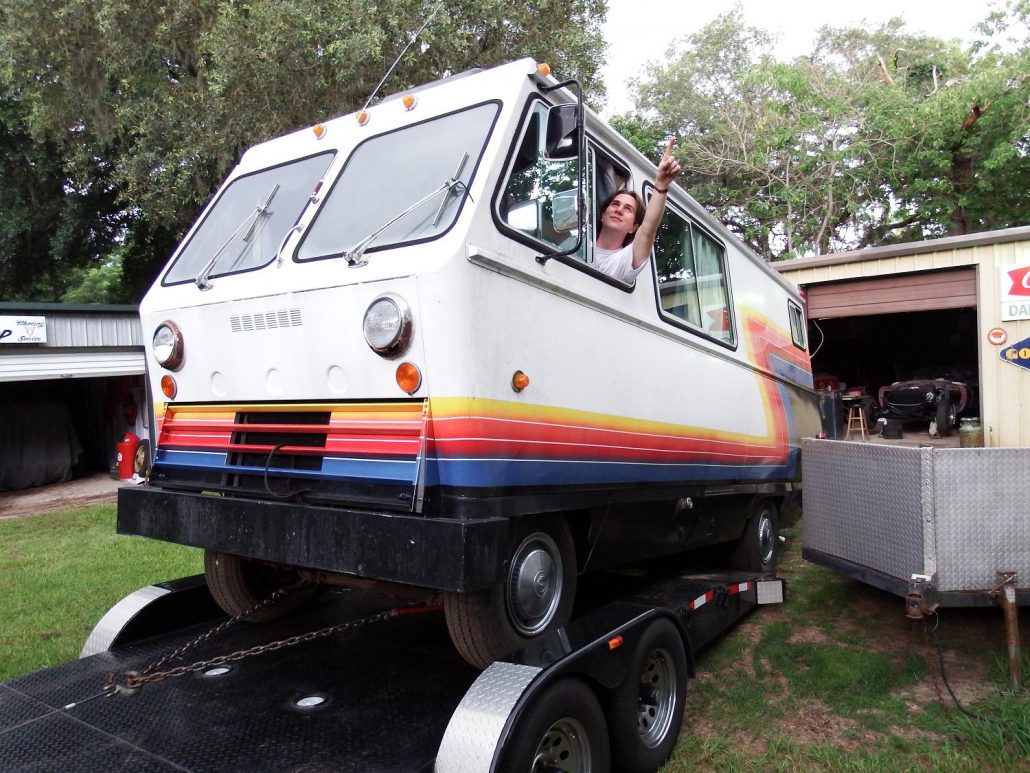 We always point to the sky and in an “X-Files” theme….say “The Cars Are Out There…”  We seem to find a lot of them 🙂

So we got home, safe and sound, falsely promising ourselves that we would never take on such a big towing project like this ever again.  And although now we have identified what it is – a Ferber Coach – we didn’t know then.  How we did that involved help from our good friends at Hemmings Motor News and especially Kurt Ernst.  Kurt was kind enough to post a story seeking help on identifying what we found and 64 responses ensued.  Love that Hemmings audience 🙂

So stay tuned gang.  There’s much more to share and that’s what we’ll do in part 2 of this story sharing how we found out exactly what we had “landed.”