Creating a special body for a car was more the norm for the wealthy before World War II, but much less so in the postwar years.  Custom work after the war was often done in fiberglass (even the legendary Detroit Motorama cars) – but not everything.  There were companies and individuals in America that would still build original or highly modified steel and/or aluminum new bodies for postwar cars.  Some of these companies included: 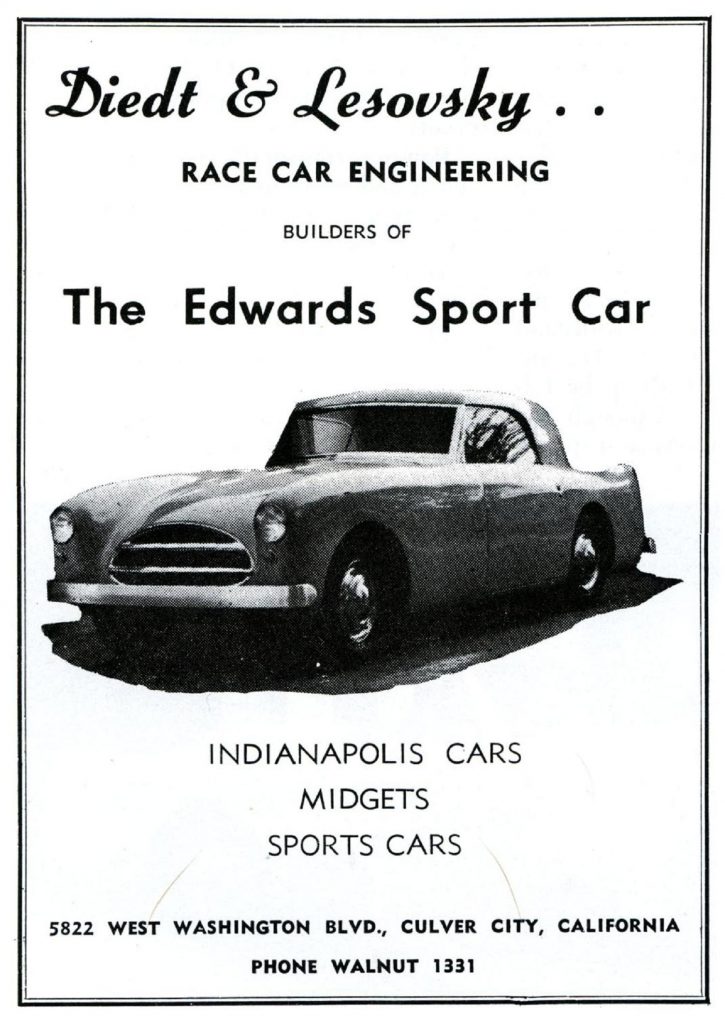 But today’s Custom Cadillac is completely new to me.  That’s hard to do since I’ve found and own two coachbuilt Custom Cadillac cars from the 1940s.  And so far all research has turned up just this one photo of this car and the write up below.  This coachbuilt car was featured in an interesting and unlikely magazine – the March, 1950 issue of Fortune Magazine.

So let’s get our discussion going and check out the information Fortune Magazine shared with their readers back in 1950 about the Harold Reiner Custom Cadillac.  And away we go… 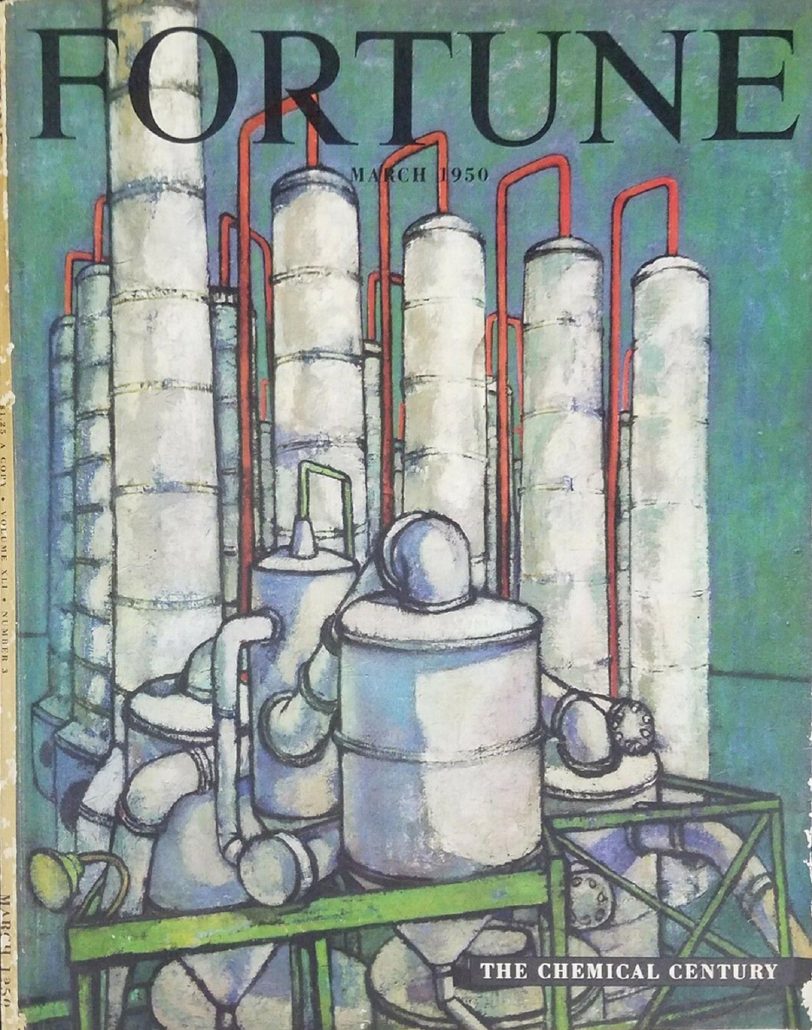 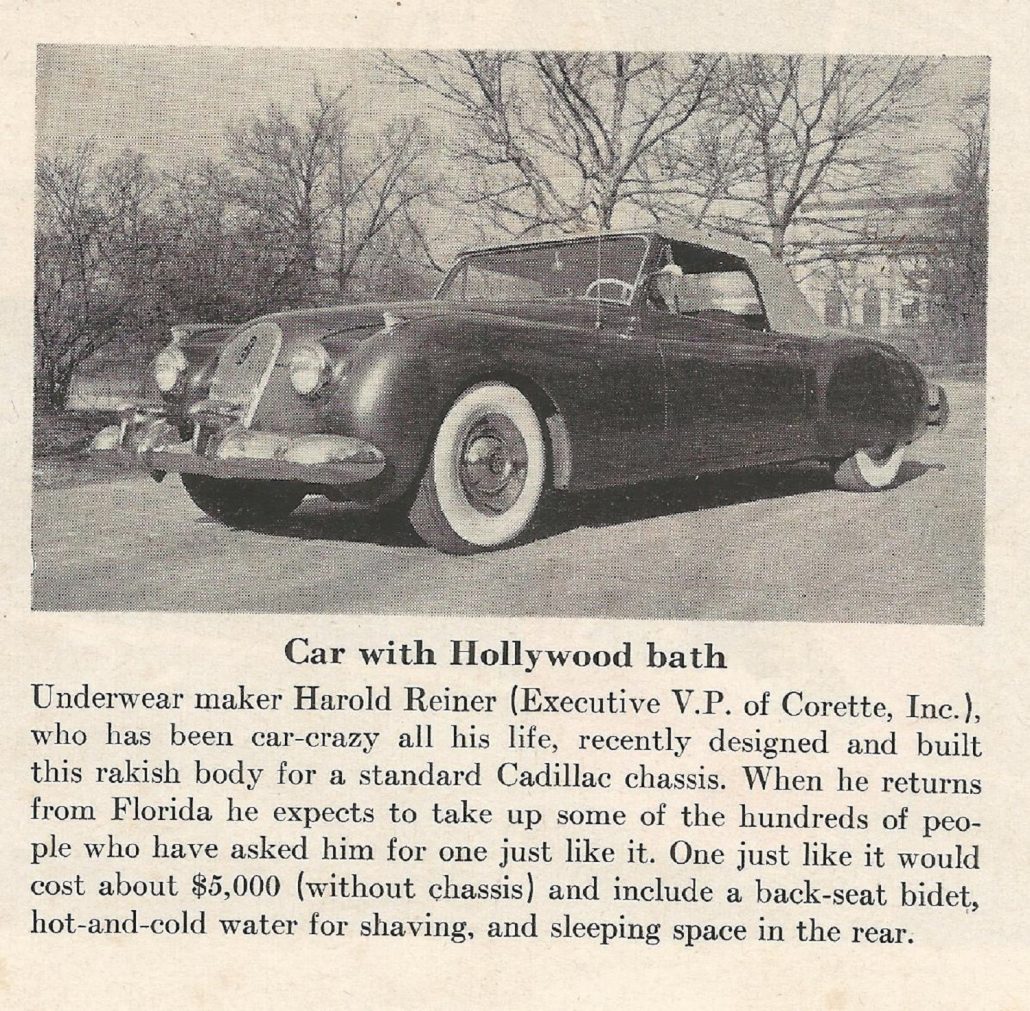 Text From Article Above:  “Underwear maker Harold Reiner (Executive V.P. of Corette, Inc.), who has been car-crazy all his life, recently designed and built this rakish body for a standard Cadillac chassis.  When he returns from Florida, he expects to take up some of the hundreds of people who have asked him for one just like it.  One just like it would cost about $5,000 (without chassis) and include a back-seat bidet, hot and cold water for shaving and sleeping space in the rear.”

I first heard about this car from Zachary Reiner – grandson of Harold Reiner who commissioned the car.  His grandfather Harold was 44 years old in 1949 when the order for the car to be built was given, and he had Kassel Cadillac of Union City, New Jersey build it for him.  That’s not a coachbuilder that I’ve heard of before and scant information exists on Kassel Cadillac, but the location of the dealership was intriguing – Union City, New Jersey. 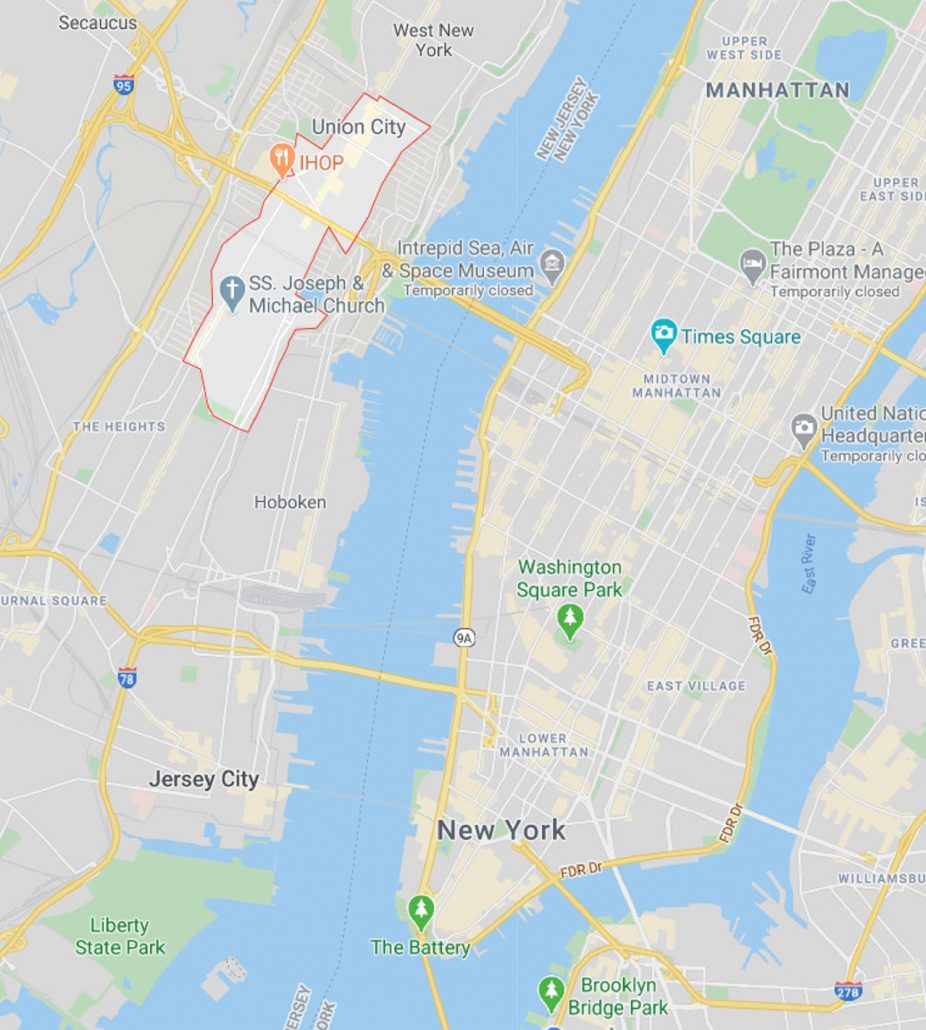 Union City is on the west end of Lincoln tunnel.  The east end of the tunnel exits into Manhattan close to Times Square – near the heart of Manhattan.  That’s not your normal Cadillac dealership.  Given its proximity to Manhattan, no doubt some pretty powerful – and wealthy – people were customers of Kassel Cadillac back in the day.  It’s unknown who Kassel Cadillac retained to actually do the work on Harold’s car though.  They could have done it in-house or used someone like Derham who was still a coachbuilder in the northeast in the late 1940s.

Harold’s son, Wally Reiner, was 9 years old at the time the car was finished.  I had a chance to talk with him and learn more about the car and the times.  Let’s review some of what I learned.

Wally’s father Harold was a “bon vivant” – a person who enjoys a sociable and luxurious lifestyle.  He was also a kind and generous person to those who knew him helping people in need at many a turn.  The company he worked for, Corett, was started by his family years before and grew to great success by the late 1940s.  Harold bought a new car every year (sometimes more than one) and when the Jaguar XK 120 sports cars came out – he bought two from the famed Max Hoffman of New York City for his family.  It was in this context that Harold took the leap and commissioned a one-off custom bodied Cadillac to be built.

The project started in late 1948 or early 1949 and began with a request to buy a new chassis from General Motors.  The request was denied.  I can only speculate why, but I have a hunch.  Below is a letter from the Ford Motor Company to John Bond in late 1948.  Bond was asking about buying a 1949 Ford chassis.  Bond had worked for Frank Kurtis and would go on in a few years to become owner of Road & Track Magazine.  His interest in 1948 was keen and on target for it was the first year Ford would be introducing an independent front suspension – a very attractive platform to build a sports car on at the time.  Bond’s request was denied. 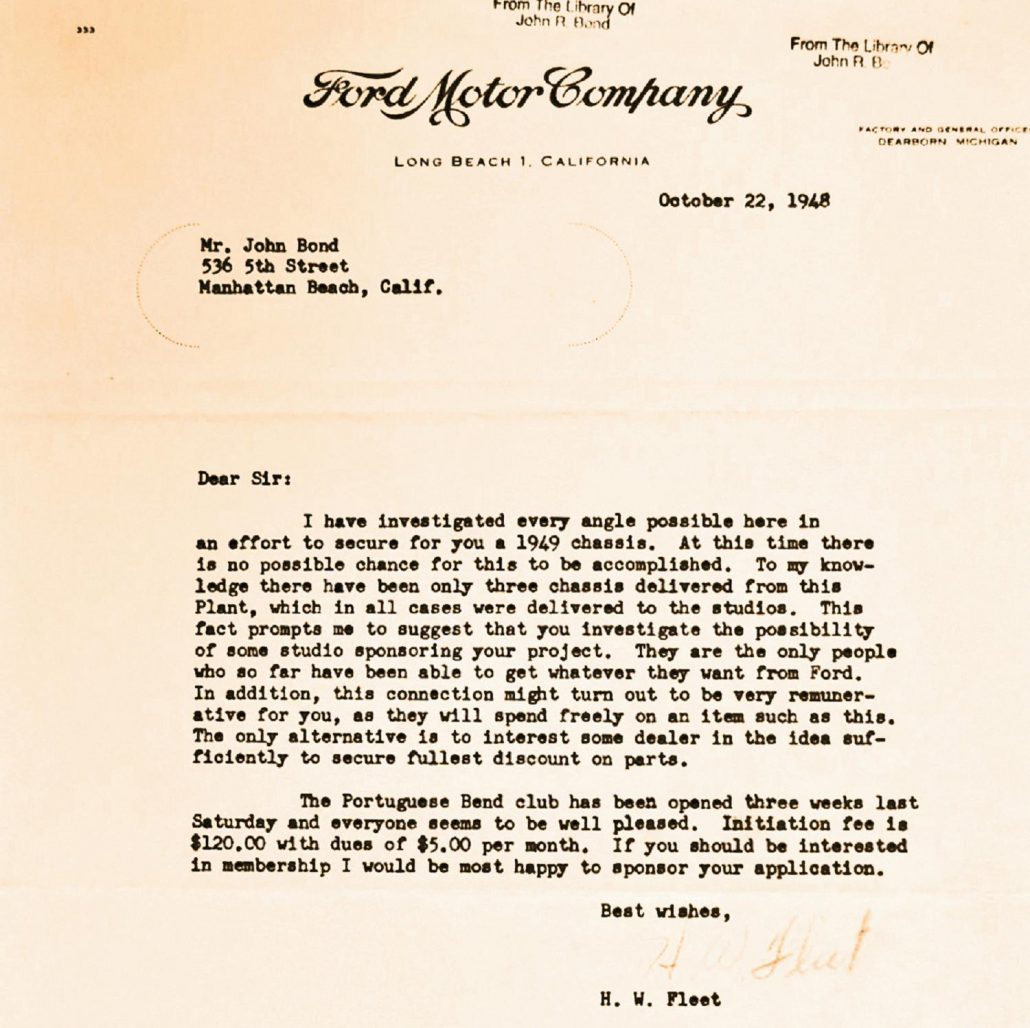 If the coachbuilders of Kassel Cadillac were looking to use a 1949 Cadillac chassis, it would have been a great choice.  Not so much for any new chassis features introduced but for the engine.  1949 was the first year for a postwar Cadillac overhead valve engine – an engine that would become the standard in many forms from 1949 forward.  Perhaps it was impossible to obtain, so the builders settled for locally sourcing a Cadillac chassis and drivetrain.  Did they build the car using a Cadillac Flathead engine that was made through 1948?  Or did they source a first-year 1949 Cadillac overhead engine?  At this point we don’t know, but you never know what information we’ll find in the future 🙂 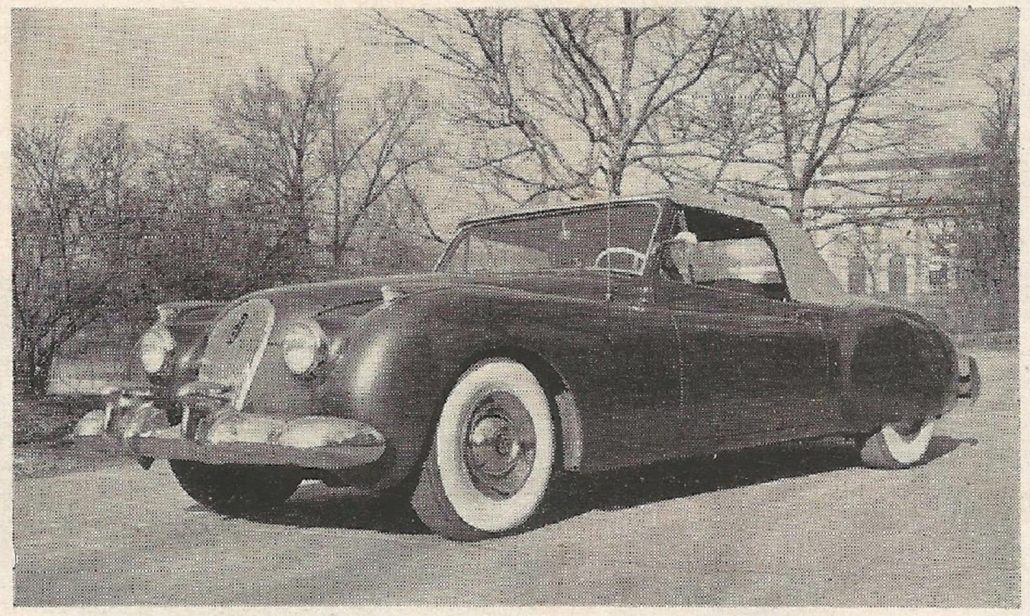 Harold was enamored with the style of the Jaguar XK120, and so he asked that the design of his Custom Cadillac be inspired by this shape.  This is most apparent in the grille of the finished result.  But think about the size of the finished Cadillac.  In 1948, the wheelbase of the Jaguar XK120 was 102 inches – about the size of a 1950s Corvette.  The Cadillac was a monster compared to the Jaguar.  The shortest Cadillac in the late 1940s wore a 126 inch wheelbase – more than two feet longer than a XK120.

I checked with Harold’s son Wally to see if he remembered if his father’s Custom Cadillac was a “Cadillac” sized car or a “Jaguar XK120” size car.  He remembers the car being massive – Cadillac size it was.  Wally also remembers his father talking about his “Cadillac” confirming it had a Cadillac chassis and Cadillac drivetrain.  What an amazing car this must have been to be seen on the streets of New York City in the late 1940s.

I asked Wally about more of his memories of the car.  Wally shared that it was British Racing Green with a pigskin interior.  Instead of a back seat it had a massive luggage area which he remembers was about 5 feet wide (width of interior) and 4 feet deep.  Both the grille and the hubcaps bore the initials “HR” for Harold Reiner.  He also remembered that the car was a convertible.  If you more closely study the photo of the car above – the top may have been a “Carson Top” – one that looks like a convertible but is removable and lifts off like a hardtop.

Where is the Car Today?

And what became of Harold’s Custom Cadillac?  Wally remembers that like most cars his father owned he sold it soon after taking delivery.  He recalled that his father took his car to a car show early in 1950, but the car was outside on the street – not in the show.  Nevertheless, it created a spectacle by itself with crowds around the car and many notes and business cards left on the windshield.  Sometime in 1950, Harold sold the car to a doctor in Deal, New Jersey and hasn’t been seen on the roads since. 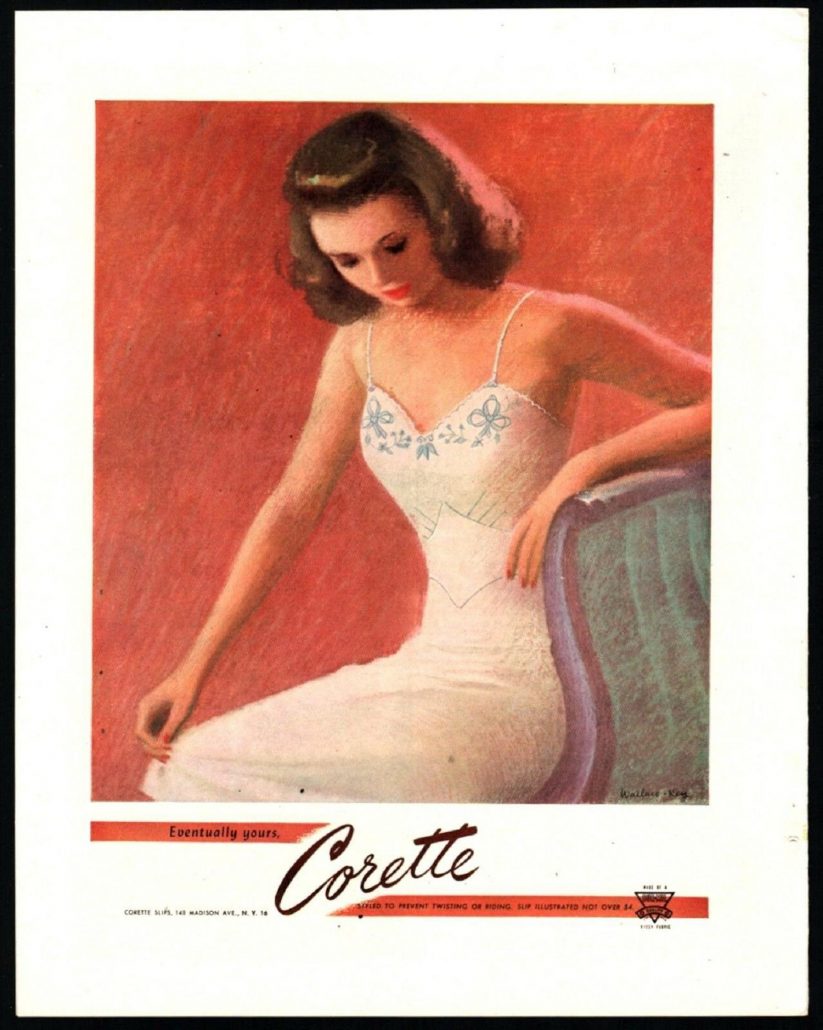 Harold Reiner’s family started the Corette company from scratch and grew it into a successful business enterprise that was headquartered on Madison Avenue in New York City – one of the most significant addresses you could have for any business in the nation.  Corette was the combination of two words – “correct” and “corset” from which the company name “Corette Inc.,” was derived.

Corette’s manufacturing center was in Hoboken, New Jersey – just across the Hudson River from Manhattan and near the Union City, New Jersey Kassel Cadillac dealership.  Harold co-owned this company with his family.  Given that Corette was a garment manufacturer and sold their wares to the public through department and other store locations, it’s not surprising that Harold was friends with the likes of the Gimbel Brothers and R.H. Macy – both of grand Department store fame.

Perhaps it was this fame that landed the short note and photo of Harold’s Custom Cadillac in the 1950 issue of Fortune Magazine.  As far as I know, this is the only handcrafted car that appears in Fortune Magazine – perhaps because Harold was quoted as sharing that the car would soon be available for purchase for those interested.  What fun it would be to go back in time and get the whole story – and more photos too.

So where is the Custom Cadillac commissioned by Harold Reiner today?  No report of it has been shared since 1950 and perhaps its still in the garage where the doctor parked it in Deal, New Jersey 70 years ago this year.

Gang….let’s go out and find this car.  Some of you may think this is too optimistic but we’ve found so many lost cars at Undiscovered Classics in the past many years, perhaps this will be the next.  For those of you wanting to know what’s it’s like finding a lost car tucked away for decades, check out the story on another car I found that was stored in a garage for 60+ years using the 1957 Road & Track advertisement – still waiting in the same garage for a new owner to appear: