There are a great many stories of lost cars and lost history out there – waiting for someone to begin the research where finding the family and/or car would be rewarding and worthwhile to all.  Today’s story on the 1952 Fahl Sport Custom is one such story.  Mr. Mark Fahl lived in Grants Pass, Oregon and has been waiting for 68 years for someone to share his story on his rear engine sport custom car.  I’m honored to do so Mr. Fahl.  So let’s begin. 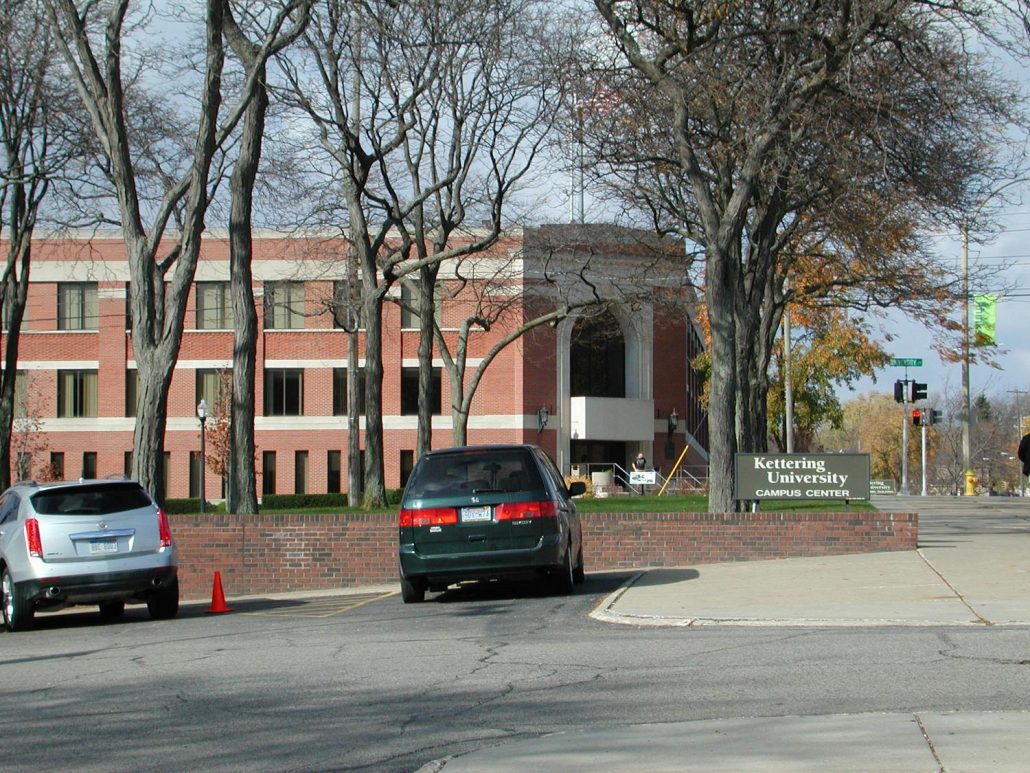 First Sight of Kettering University During our Visit in 2010.  Rick D’Louhy, Stan Fowler, Alex Boeriu and myself (Geoff Hacker) would spend the day in the Special Collections Area.

More than 10 years ago, I had a chance to visit the Kettering University archive in Flint, Michigan to do some research on a car I was studying designed by John Bond and Strother MacMinn’s – the famous LeMans Coupe.  We traveled to Flint, Michigan to search the archives of John Bond who was the owner and editor of Road & Track magazine back in the 1950s.  After Bond’s passing in 1990, John’s family bequeathed his R&T archives to his alma mater – GMI – which became Kettering University some years later.

Although I never got a chance to meet John Bond, I’ve learned quite a bit about him over the years.  One thing that’s apparent from this research is that he loved handcrafted specials.  Time and time again they graced the cover of Road & Track magazine with 1957 showcasing a Byers SR100 on one cover and a LaDawri Conquest on another.  John Bond even collaborated with Jim Byers to build a Byers SR-100 – a car that still exists today (but that story is for another day).

I knew that the adventure into the John Bond archives would yield a treasure trove of stories and artifacts – like the one we’re sharing today.  Over the years, John Bond had kept unpublished stories of American Specials in his personal archives.  Many of these stories were famous like the cars built by Briggs Cunningham.  Others were obscure like the one we’re sharing today from Mark Fahl.  Let’s check out the letter Mark sent in to Road & Track in the fall of 1952.

I am sending you some pictures of the custom rear-engine car that I made this summer.  The specifications are consisting of a Chevrolet box frame, Chevrolet rear end, Ford motor bored out to Mercury size.  Body is of Ford, Chevrolet, Chrysler and Lincoln.

The car handles very nicely and holds the corners very good.  The top speed is unknown although I have driven it at a very good rate.  I would appreciate any inquiries as to the car. 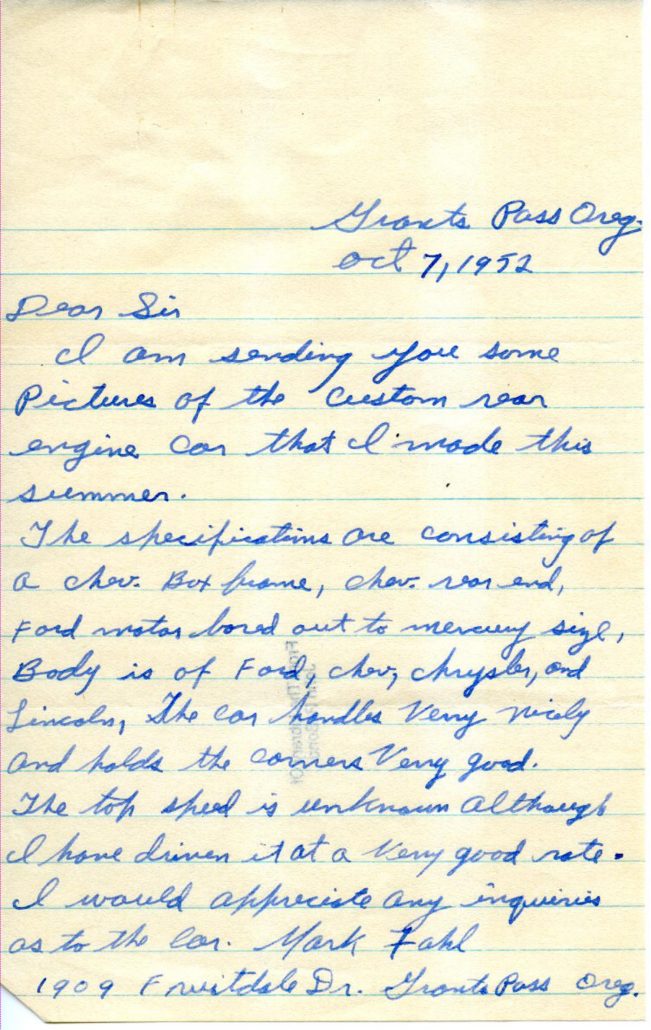 Mark Fahl sent two photos in to Road & Track and both appear below. 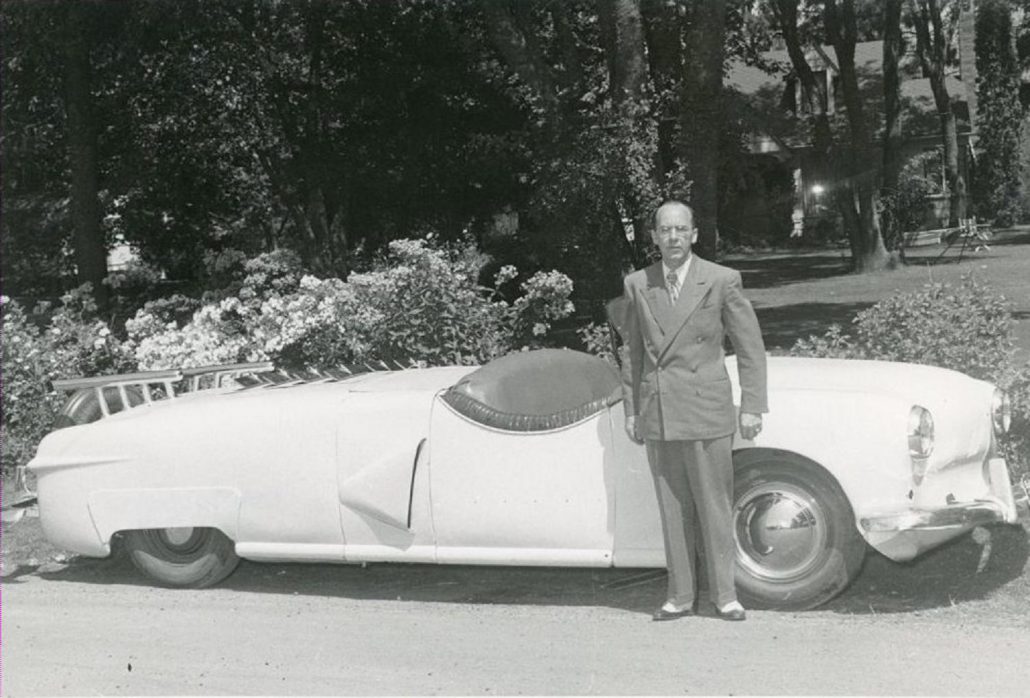 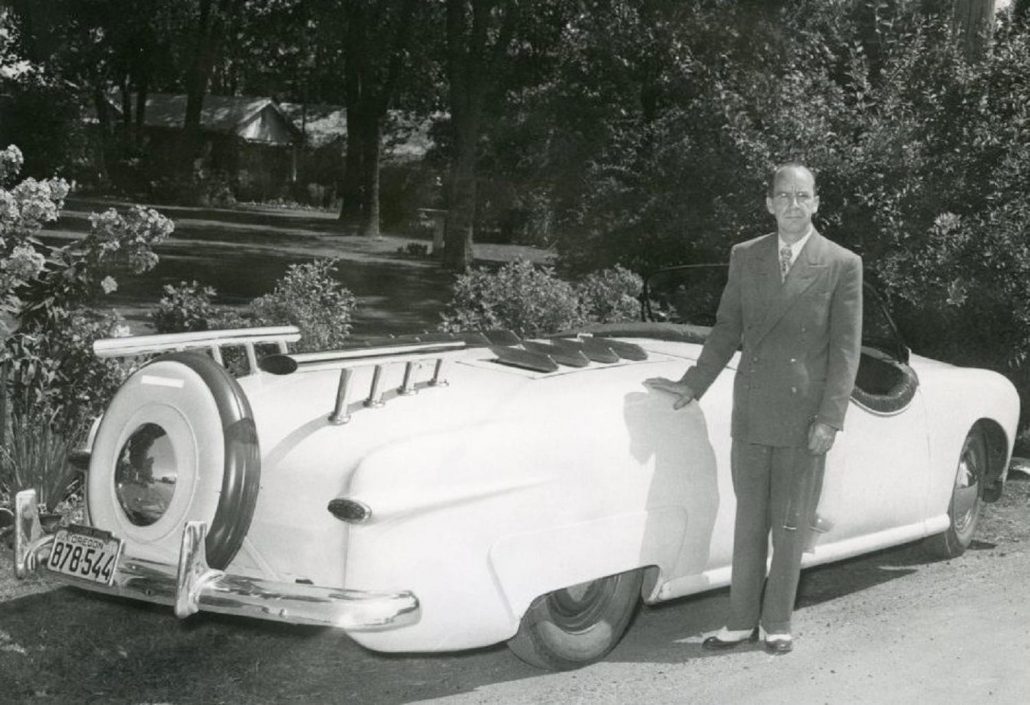 There are many aspects of this story and car that are interesting to me.  The intake and exhaust designs are unique and certainly add a bit of “space age” design to the car (but before the space age era).  The forward position of the cockpit is expected and interesting to see.

I would have enjoyed seeing some engine bay photos but the two photos I found were the only ones in the archive of this car.  I also appreciate the way in which Mark Fahl is shown with the car (I assume it is Mr. Fahl).  Very formal, very proud…no doubt an accomplished person who took pride in all of his projects.  He looks to be in his late 30s or even 40s in these photos.  Perhaps we’ll find the family and learn more.

I can’t think of another rear-engined American Special that I’ve written about, but I’m sure there are more.  I’ll check thru my archives and see what I can find.  In the meantime, perhaps some of you will know the history of this car and/or the family from Grants Pass, Oregon.  Was the car featured in a magazine?  Does it still exist today (many families keep handbuilt cars as history built by their relatives).