Several years ago we rescued and acquired a 1952 Singer AD SM Roadster that had been built and raced by Ralph Bush – and what a treat that story has been.  Over the years, Ralph and I have became friends and he’s shared stories of other cars he’s had – some race cars and some not.  Well today’s story is about one of the “not race cars.”  In fact, its about one of my favorite kinds of cars – a car that belongs to a category of cars we call “Sports Custom.”

What Is A Sport Custom?

The term “Sport Custom” was first used by Dan Post in a series of books on American custom cars starting in 1944.

In his writings, Post reviewed the history on how these cars came to be and provided examples of sport custom cars.  Over time, the definition has been refined and generally includes a large luxury car – most with a wheelbase of over 100″.  It’s sporty in design, often with performance improvements made to the engine, luxurious interiors and often a bit “flashy” – made to get attention. Because of the balance of performance and luxury, Sport Custom Cars are also referred to now – and in-period – as “American Boulevard Cruisers”

The story below is one written by my good friend Rik Hoving who runs the Custom Car Chronicle.  Rik and I share a great appreciation for both custom cars and sport customs.  Those of you interested in these kinds of cars should visit his website via the link below:

Back in 2016 when I learned about the story of Ralph’s Sport Custom, Rik was kind enough to write it up and share it with his readers via his Custom Car Chronicle website.  Perhaps someone would recognize the car and we could find out if it still exists via his story.  Recently, I asked Rik if we could share his story of this car with our readers, and Rik was kind in letting us do so today.  Thanks Rik!  So away we go 🙂

The photos of this Sports Custom are all from the Ralph Bush Collection. Ralph bought the car in 1952, and owned it for about 3 years while he was in college in Santa Barbara, California. Before Ralph bought the car, he had seen it many times on the roads in Pasadena, California.  Ralph had a good friend Bill White, who would later become a business partner. A business partner of Bill’s at that time was Kaylor Whitehead also from Pasadena, and Kaylor was half owner of this car. Kaylor and his brother (Ralph could not remember the name of the brother) had build the Sports Custom in their home garage after they had returned from WWII. 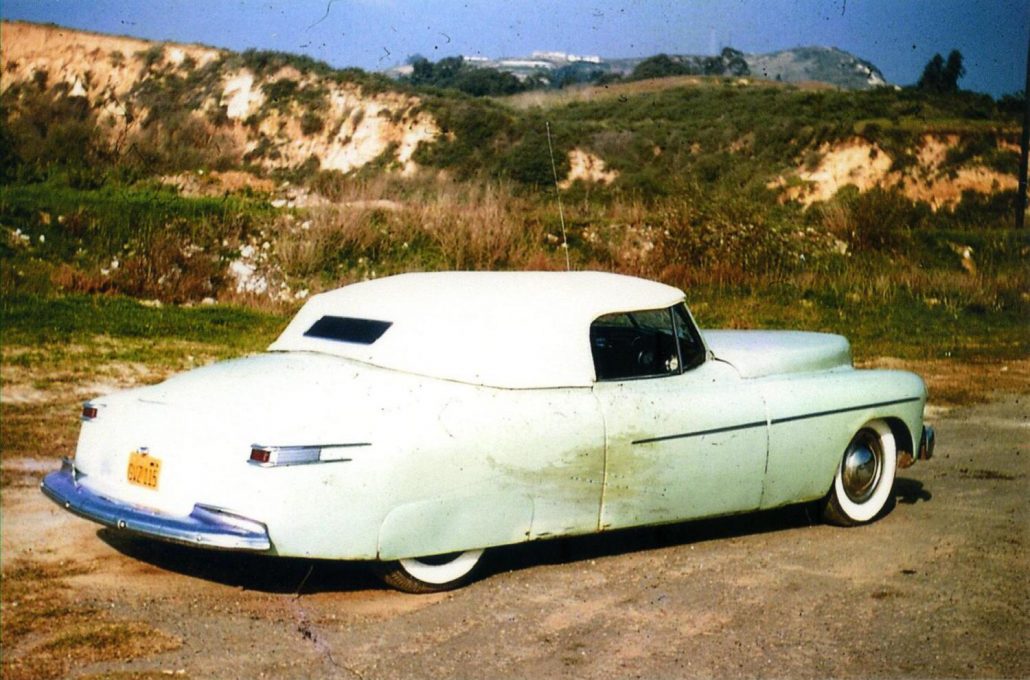 A 1941 Oldsmobile rear bumper, and 1946-48 Lincoln continental rear fenders/taillights were used. A smaller trunk opening was cut into the new shaped rear portion of the car.

They had found a 1941 Chevy that most likely had been in an accident and decided to build a dream Sports Car from it. When Ralph bought the car it has already been completed for a few years, and he never really asked what all was used to create the car, but the ’41 Chevy base was clearly visible and the engine in the car was still the original Chevy Blue-Flame 6 cylinder motor. 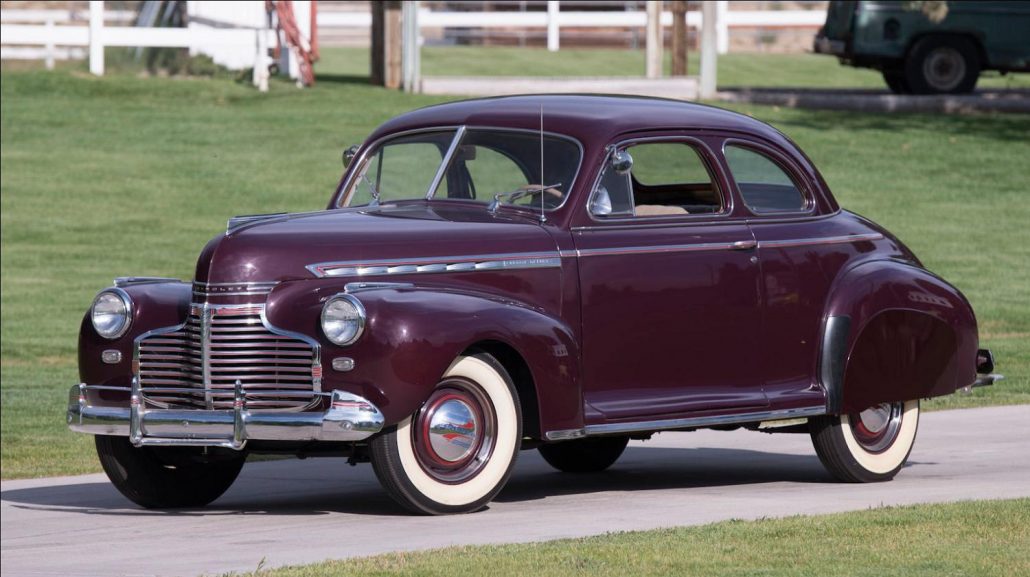 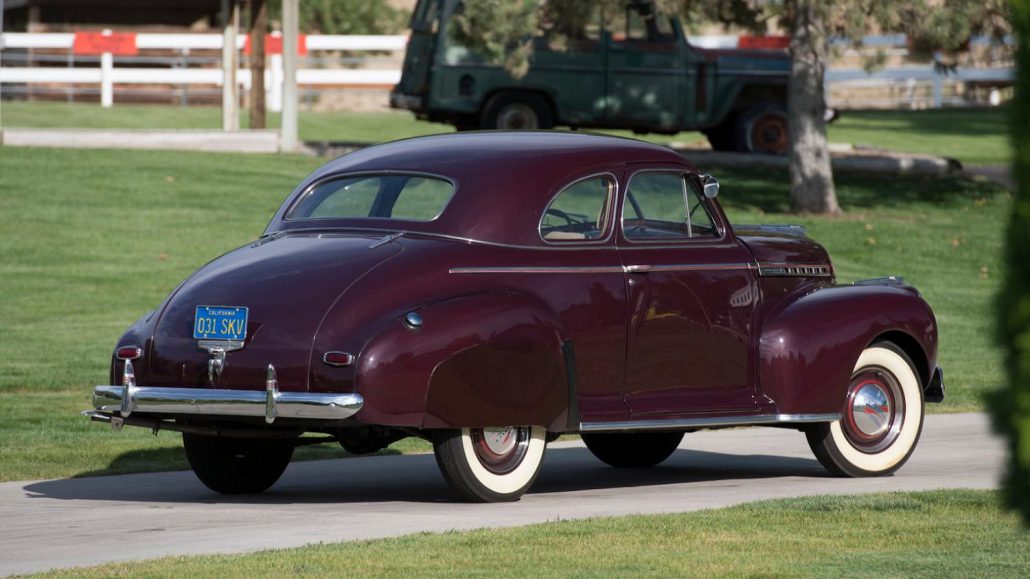 The only thing Ralph remembered about how the car was built was when Kaylor Whitehead told him that after the new fenders were added or created, that the transition from the fenders to the hood was too sharp. The brothers cut a galvanized quarter inch pipe in half and welded and leaded that in place to round of the transition from fender to hood, and make this look more pleasing.

It appears the brothers might have used some newer fenders, and possibly doors to create the new sides of the car. At the back they incorporated 1946-48 Lincoln Continental rear fender sections including the Lincoln taillights. The door tops were reshaped with the main section lower than stock, creating larger side window openings. 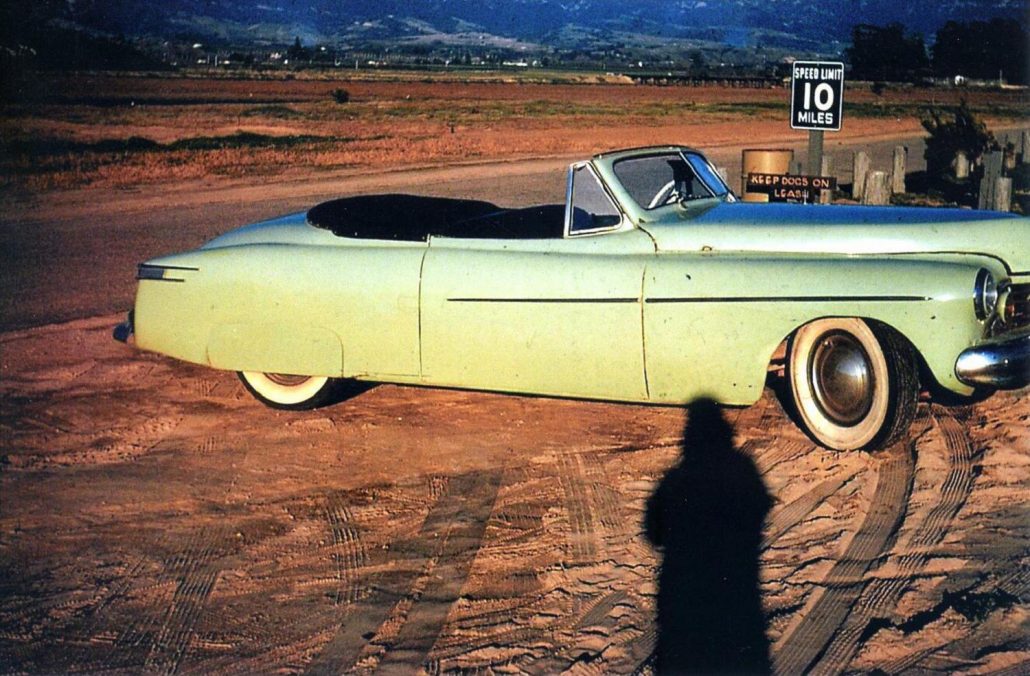 This was the only photo Ralph could find of the car with the Carson top removed. The photo was taken somewhere in Santa Monica.

The grille opening was home made and grille parts came from many cars. Originally the grille had chrome plated horizontal bars installed, which looked very nice. But Ralph drove the car a lot more than the original owners had ever done, and found that the car easily overheated – so he removed the horizontal grille bars. All the photos Ralph shared were after the car had this modification to the grille. Ralph also did the new center grille insert with the “RB” engraved in it for “Ralph Bush.” When Ralph bought the car it had a large “W” from the Whitehead brothers in the center of the grille.

Ralph was very familiar with the car and had always liked it very much. He remembered that he saw it in the 1949 Rose Bowl Parade in Pasadena and that it looked really gorgeous leading the parade. In 1952 Ralph’s friend Bill mentioned that the Whitehead brothers planned to sell the car. Ralph bought it then for $900 – quite a big sum of money for a High School kid of 18 in 1952. 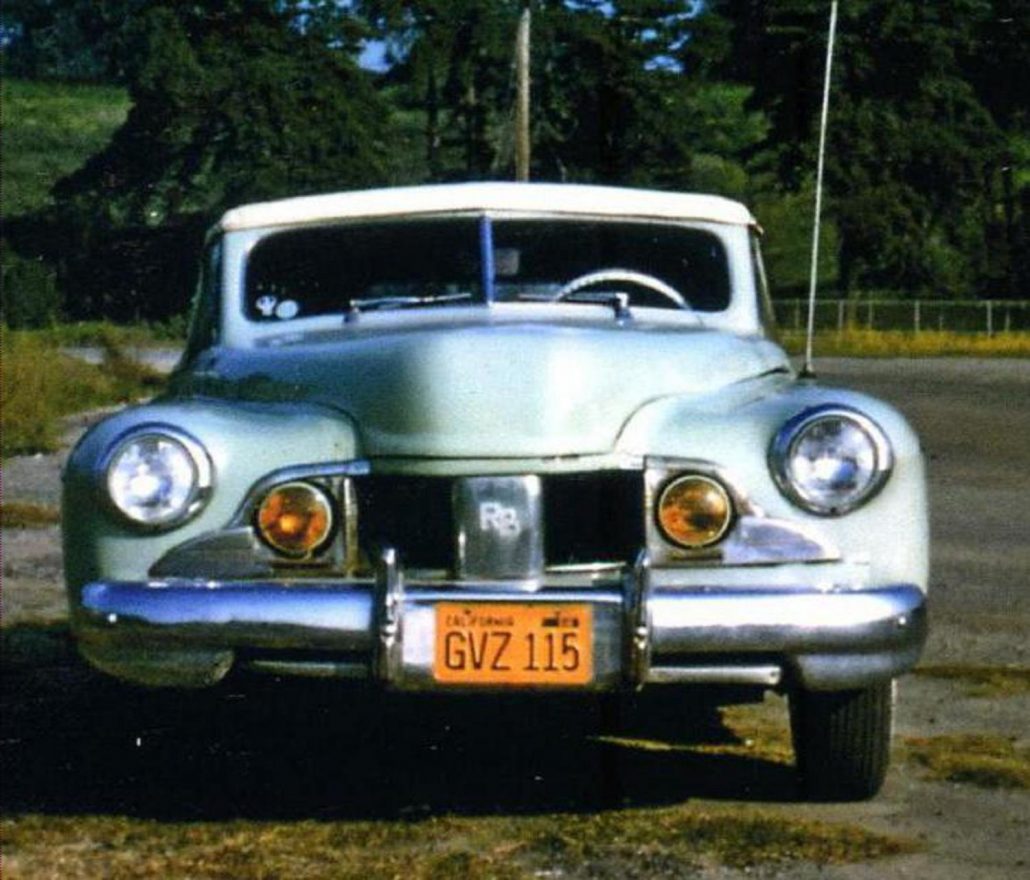 The front uses an unidentified bumper and grille parts with integrated amber fog lights. Notice the huge antenna. Something that was used a lot in the 1940’s.

But Ralph had a nice 36 Ford which he sold, and with the savings he had, he was able to get the money. He was in heaven with his new car… and the car made quite an impression with his school buddies and of course the girls in town as well. Ralph remembered that the car had a special radio in it. One that you could choose the radio station with using a foot controlled button… a big success with the girls. Ralph remembered that the real Carson top was not too heavy and could be easily removed with two guys for some topless cruising.

On one trip from Santa Barbara to Pasadena, the car broke down on highway 118. It turned out that the top of one of the pistons had broken off. It was in the middle of the night and fortunately Ralph was able to reach a small town on the highway and use a pay phone to call his father for a ride – which he did. The next day Ralph returned with his toolbox. 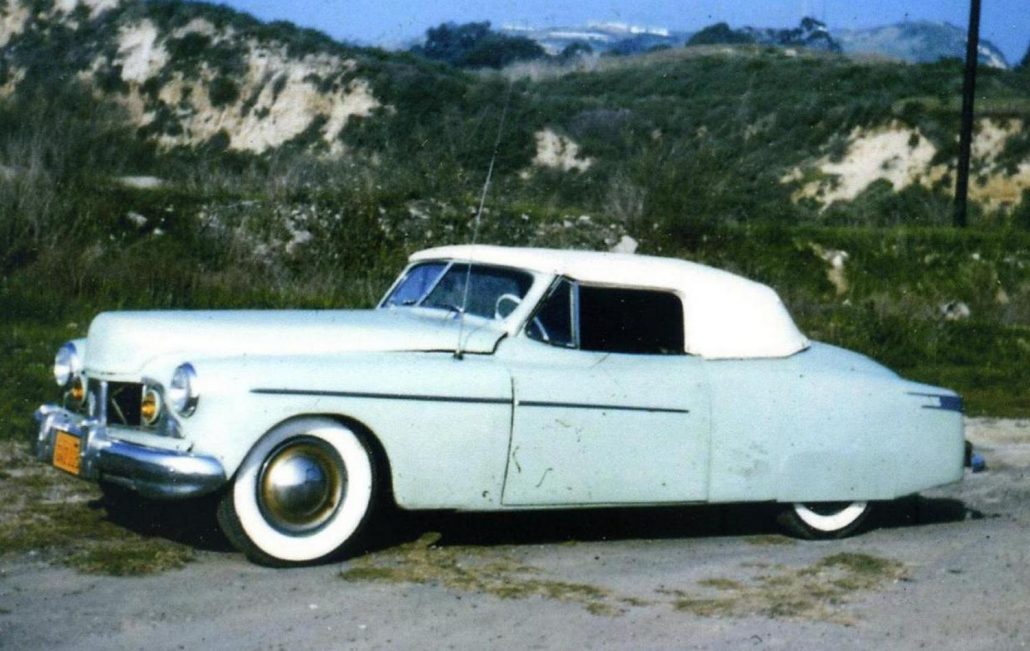 He then took off the head, and found the broker piston problem. He took out the piston and spark-plug, put the engine back together and started the engine. He drove the car back to Santa Monica running on 5 cylinders with no problem… there he rebuilt the engine. Ralph remembered that the engine had an aftermarket two carb intake, but it was never really powerful, but the sports custom did what it needed to do.

In the mid 1950’s Ralph sold his Sports Custom to his cousin Ray Milton who lived in Palmdale, California. Over the years Ralph lost track of both the car and his cousin. Ralph has no idea what ever happened to the car. After Ralph sold the Sports Custom, he bought a brand new Singer Sports Car and has always had a soft spot for Sports Cars ever since.

As far as Ralph could remember this car was the only car the Whitehead brothers ever created. They were not in the automotive business – it was just a fun project for them. 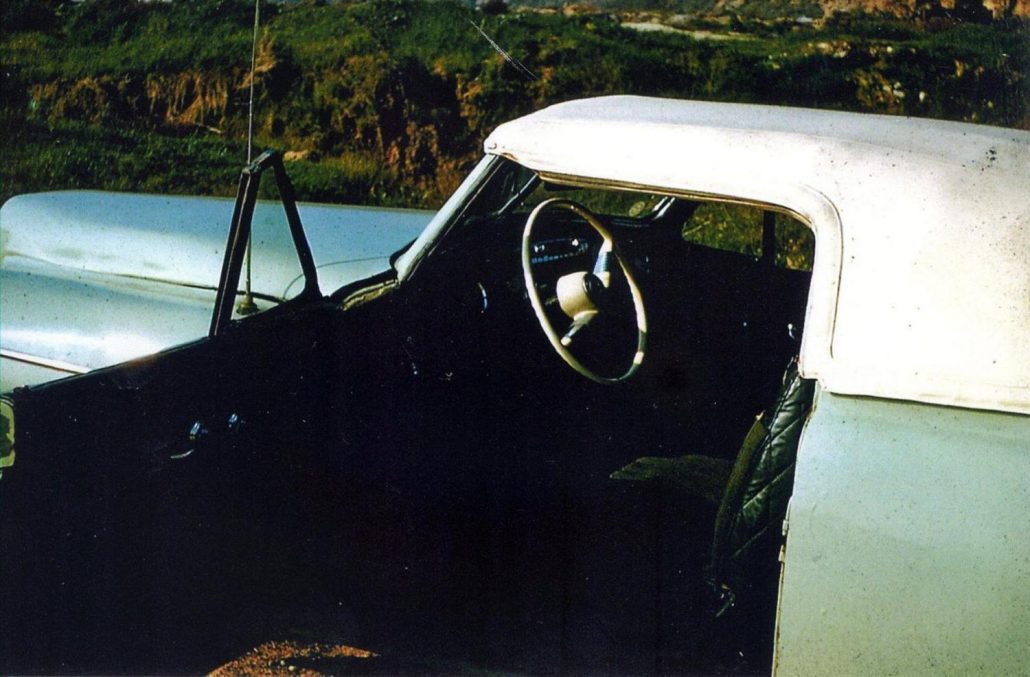 The Whitehead brothers had installed a nice Mercury Monteray Accessory steering wheel. Sadly the photo is a little dark so we cannot see much details on the interior. Ralph remembers that the upholstery was a dark green and the back seat was curved with a diamond pattern and his mother commented that “it looks like a love seat… but don’t use it as one!”. Notice that the Carson Padded top shows some sagging after being around 8 years old when this photo was taken.

So is the Ralph Bush / Whitehead Sport Custom still out there?  I don’t know gang….we’ve certainly found our share of cars that were thought to be “gone” so let’s keep our fingers crossed and see what time brings us.  Perhaps we can find a photo or two from the 1949 Rose Bowl Parade – that would be great.  I’m sure there’s a resource which catalogs film and photos from each year of this well-known parade. Again….time will tell.

Also, great thanks to Rik Hoving for letting us share his story here at Undiscovered Classics.  For those of you who want to read the original story on his Custom Car Chronicle website, click on the link below: