Even though its estimated that over 100 Skorpion cars and bodies were produced over the years, we rarely see any on the street or at shows.  Well that’s going to change with the LeMay Automotive Museum’s recent acquisition of a very special 1952 Skorpion.  What makes this car “special” is that fact that it came with quite a bit of history related to the original owners, builders and designer of the car.  A perfect “trifecta” for any museum or collection.

Back in 2017, the LeMay Museum penned a nice article about the new addition to their collection and the relevance of its history.  Today’s story shares this article, photos and more.  Let’s check out what they had to share in the article. 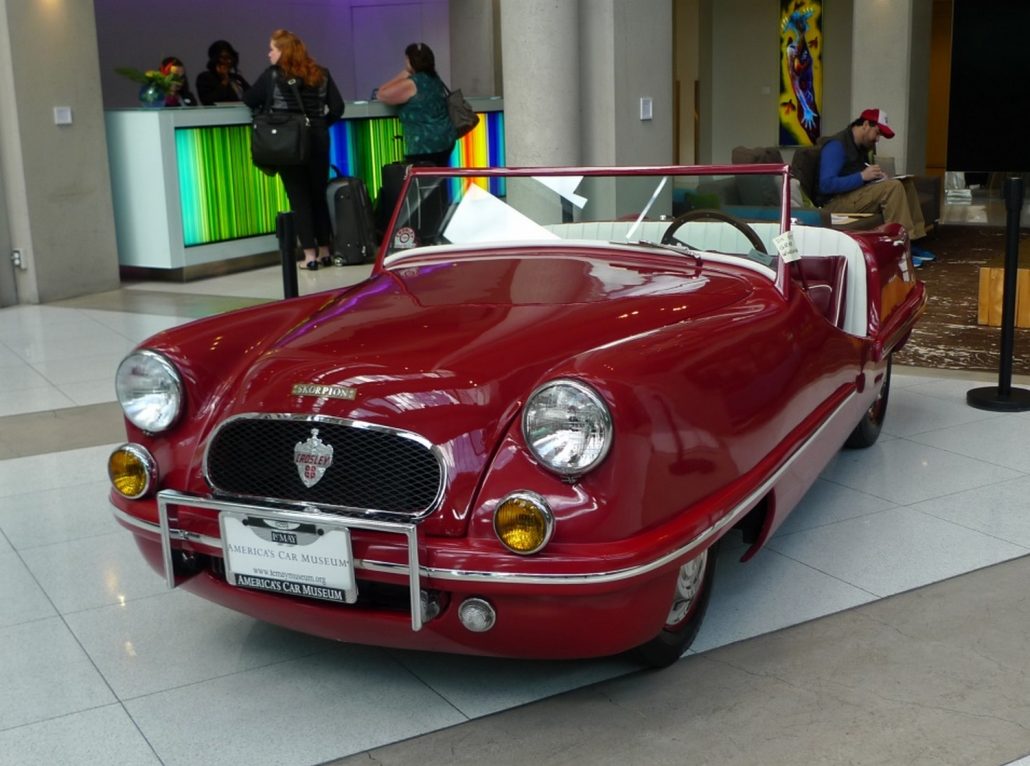 The 1952 Crosley ‘Skorpion’ is on display now at Hotel Murano.

Visitors to Tacoma’s Hotel Murano this summer will be treated to the sight of a very unusual car in their Lobby. ACM Collections recently placed on display our 1952 Crosley “Skorpion.” The story of this little car can be traced back to 1942, when famed LeBaron Coachworks and Chrysler Designer Ralph Roberts teamed up with plastics pioneer Jack Wills to design a simple, small sports car for post-war America using a fairly new process known as “glass fiber.” 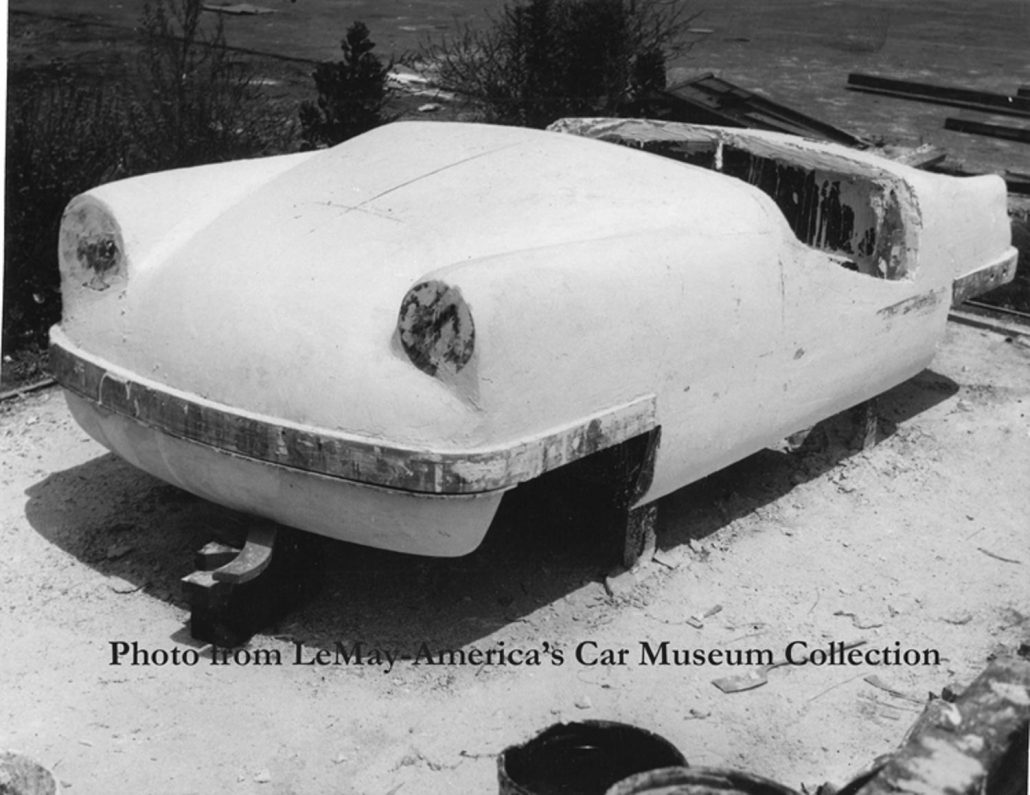 The two men met in 1942, starting Wills and Roberts Manufacturing Company in Pasadena, California for wartime production of plastic housings for Aerojet and manufacturing fiberglass droppable boats for the U.S. military. In 1946, with the war just over, the two began looking for new products to build for peacetime production. Roberts had an idea to explore building a “plastic bodied car,” so the two men started to work on developing a plastic car body that could be engineered to fit on a small frame. Roberts began working on crafting his design idea eventually creating a one-eighth scale clay model. Wills built a full-size plaster buck from this design which was used to create the fiberglass body molds. 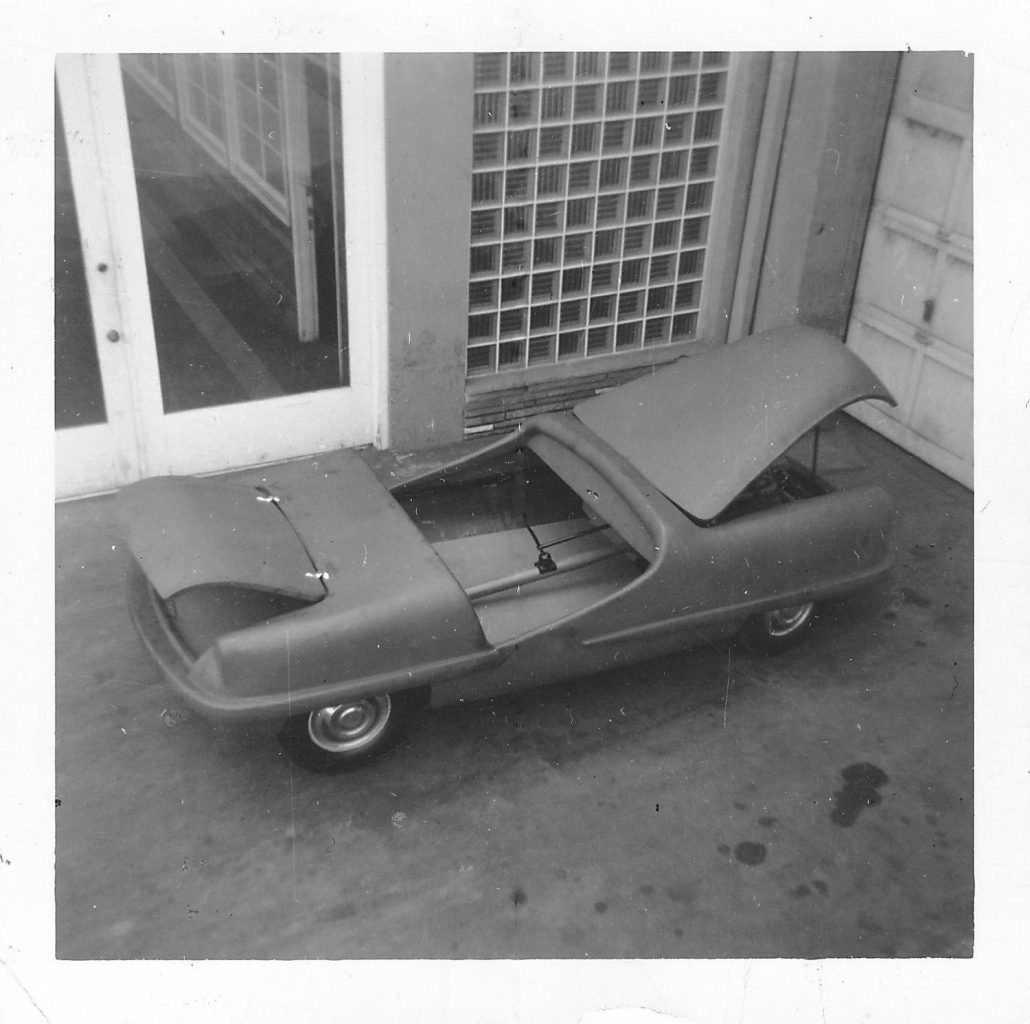 Here The Prototype of the Skorpion is Coming Together

Around 1949, Wills brought in his friend and neighbor Burton “Burt” Dake owner of Plastics, Inc. in Pasadena, California. Burt’s company manufactured everything from dice to Revell model car kits. Burt was very interested in learning more about the new glass fiber process that Jack had been perfecting. Using the molds created from the plaster buck, they hand-made four bodies building them into complete running cars using modified Crosley frames.

The first design, named the Wasp, was powered by surplus Indian motorcycle engines installed in the rear of the car. Ultimately it was felt they needed a car with more power.  It was decided to put the Crosley engines back in so with a quick re-design of the hood to accommodate the new front position of the engine, the Skorpion was born. It was Roberts who chose using the German spelling of scorpion as the name. 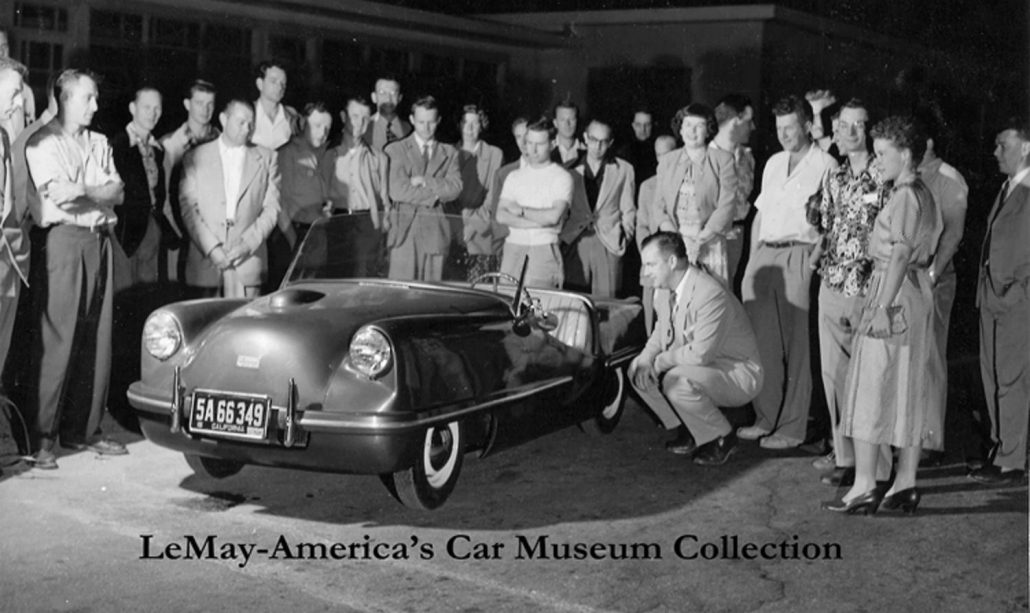 As the body production progressed, the “fiberglass” cars started getting noticed.  The Skorpion, along with its prototype the Wasp were invited to be exhibited at the 1951 Los Angeles Motorama, capturing a feature article spot in the April, 1952 issue of Motor Trend Magazine. 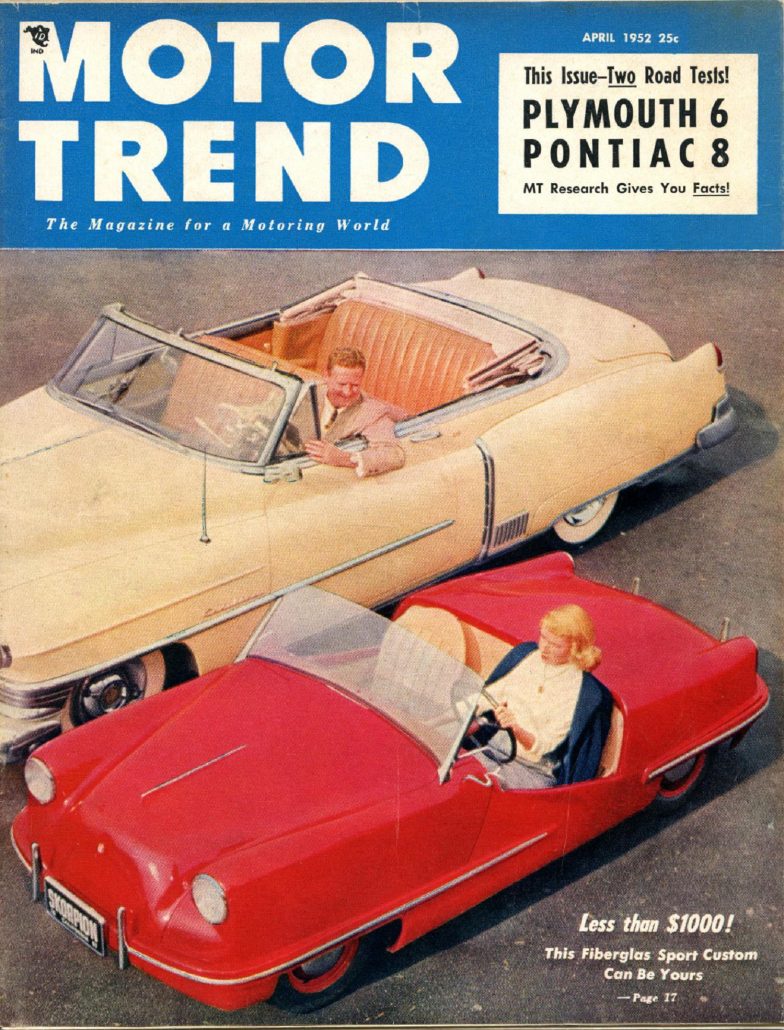 The Skorpion First Appeared in Magazines in This April, 1952 Issue of Motor Trend

The cars were marketed by the WilRo Company, a new post-war partnership formed by Wills and Roberts. The Skorpion was sold in the form of a kit that could be fitted onto various frames. The Skorpion body kit’s base price was $445.00 and would fit a chassis with a wheelbase of up to 80 inches with a track of 40-44 inches, using engines such as Crosley, Ford V8-60, Offenhauser, and others. 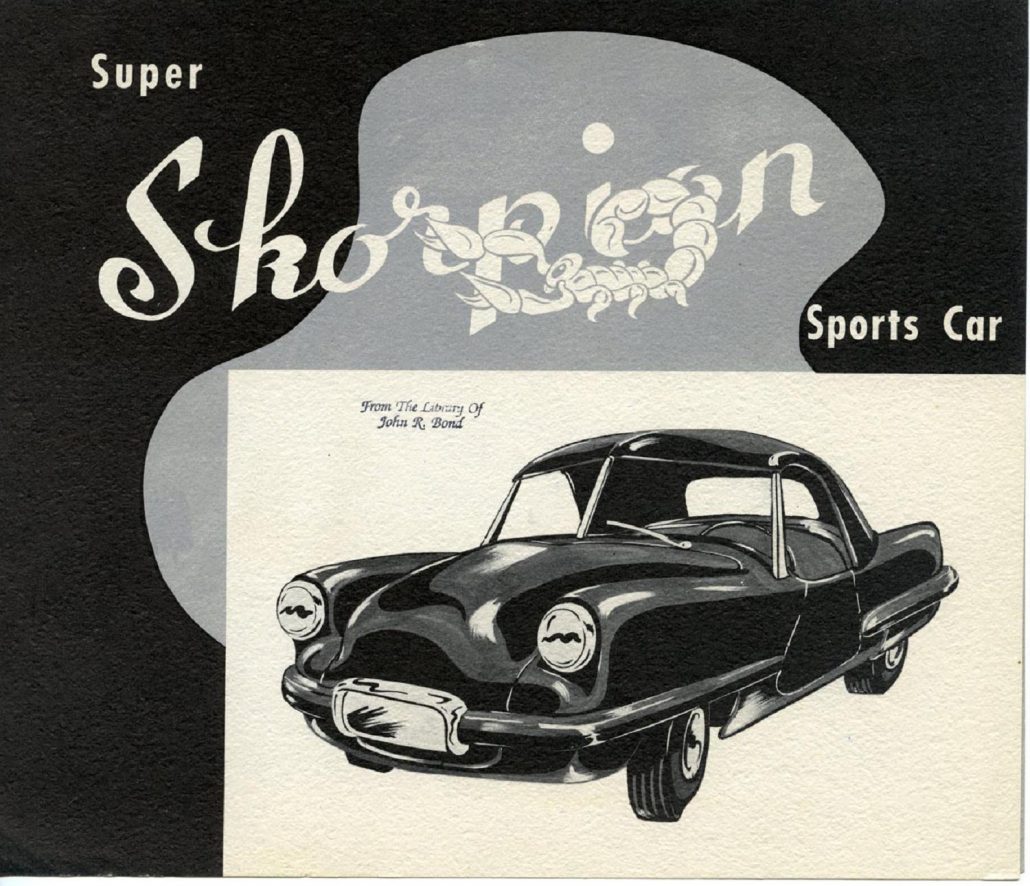 About 25 Skorpion bodies were produced before Wills sold the business in 1952 to Doug Caruthers whose company, Viking-Craft Manufacturing in Anaheim, California continued to make the kits and cars until 1954. Jack Will stated in an interview that about 150 kits were produced in total for all years. Jack Wills went on to become a noted authority on fiberglass publishing a book  in 1955 entitled “Glass Fiber, Autobody Construction Simplified”, as “an early primer for most up and coming people in the fiberglass field.” 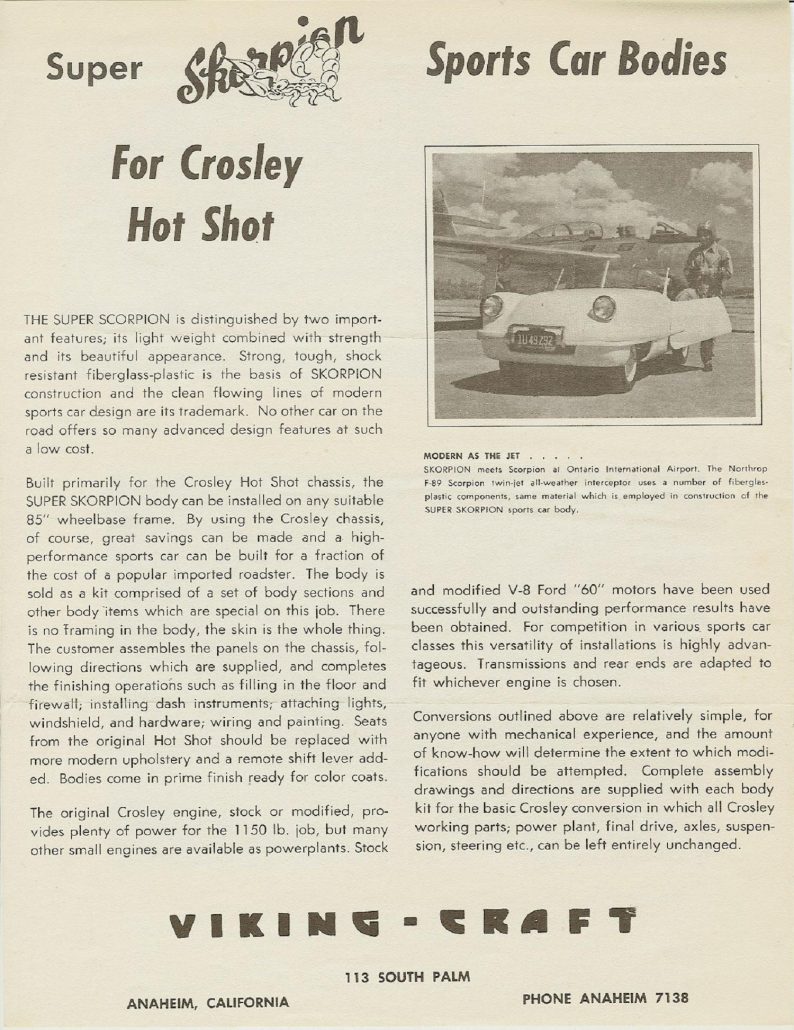 Burton “Burt” Dake built his first Skorpion on a Crosley chassis from one of the first kits 25 kits produced. The car was enjoyed for many years by Burt, his wife Stellanne and their children, but years later Burt sold the car. Burt missed the Skorpion, so in 1983 he went on a national search for another. Soliciting the assistance of Jack Wills, he found and fully restored this 1952 Crosley Skorpion later painting it red to match the first one he built. 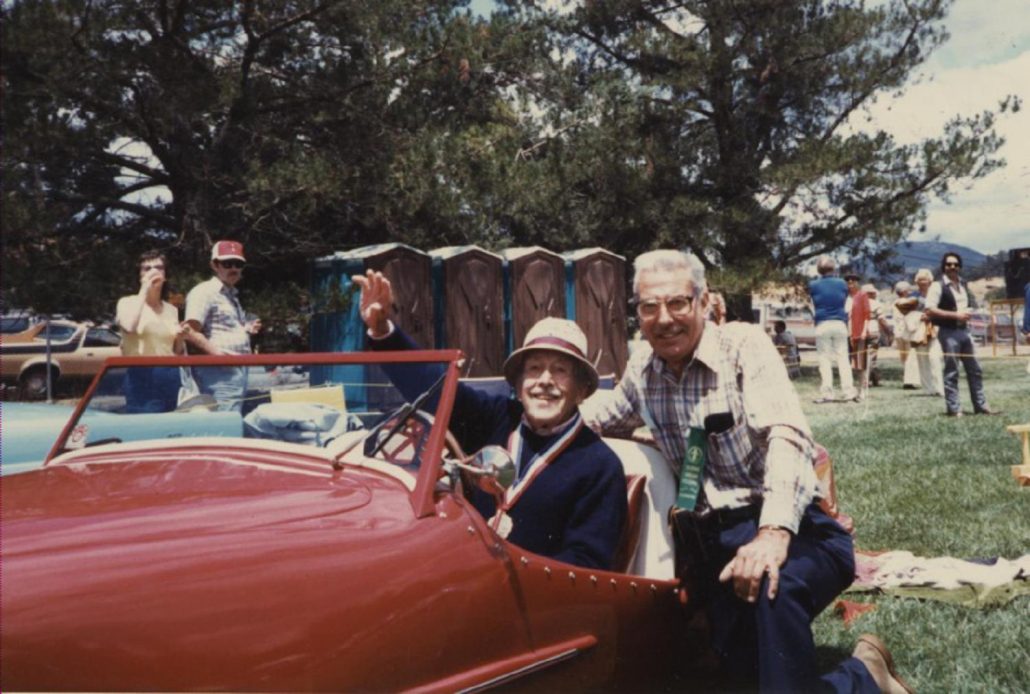 Ralph Roberts, seated in the Skorpion with Jack Wills, Carmel 1984.

Burt entered the car at 1984 Napa Concours and was awarded second in class. Jack Wills, Ralph Roberts and Burton Dake remained friends through the years, and all three reunited for pictures with Burt’s Skorpion at the Laguna Seca Car Show in Carmel California in 1984. 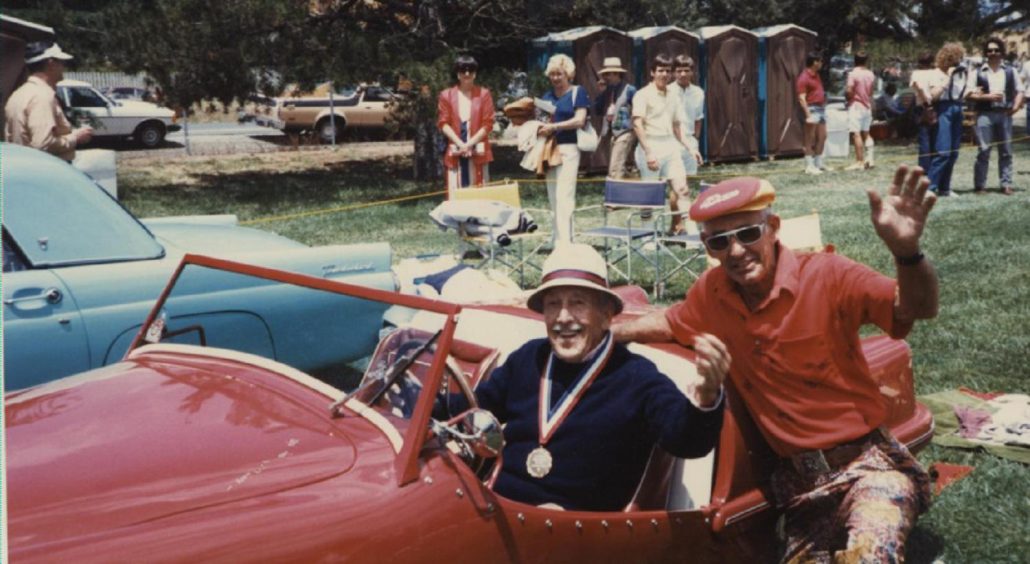 Ralph Roberts, seated in the Skorpion with Burton Dake, Carmel 1984

The ACM Skorpion is powered by a 4 cylinder 27 horsepower Crosley engine with three-speed manual transmission. The car was donated to the ACM Collection in 2013 by the daughter of Burton Dake, Stephanie Roberton. Stephanie acquired the car after her father passed away in 1987. Stephanie shared fun memories of growing in California enjoying many family outings with the Skorpion.

Here are additional photos of the Skorpion – a beautiful example that’s been added to the LeMay Collection. 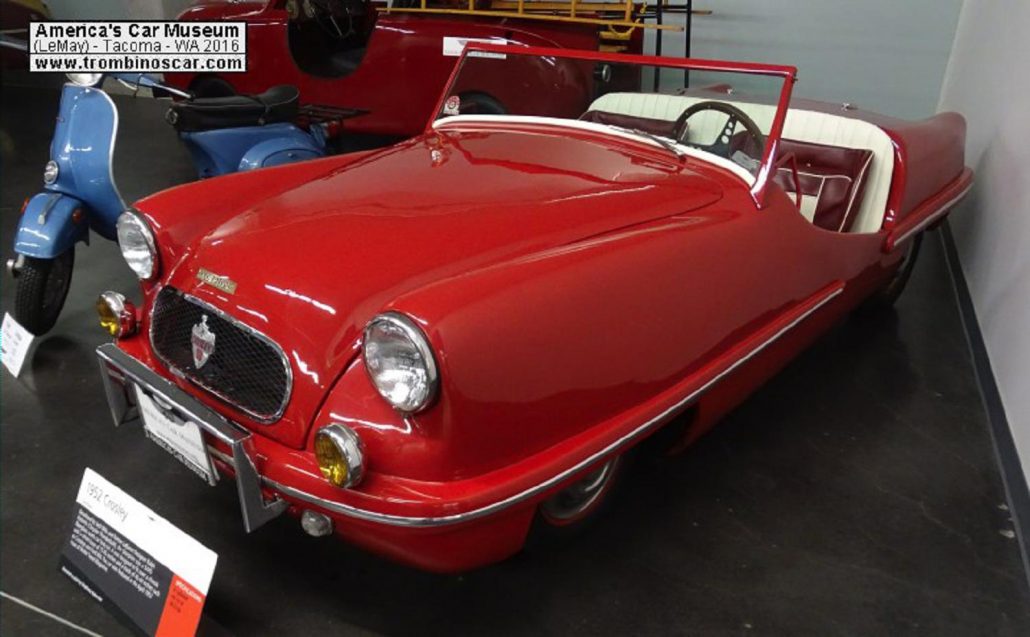 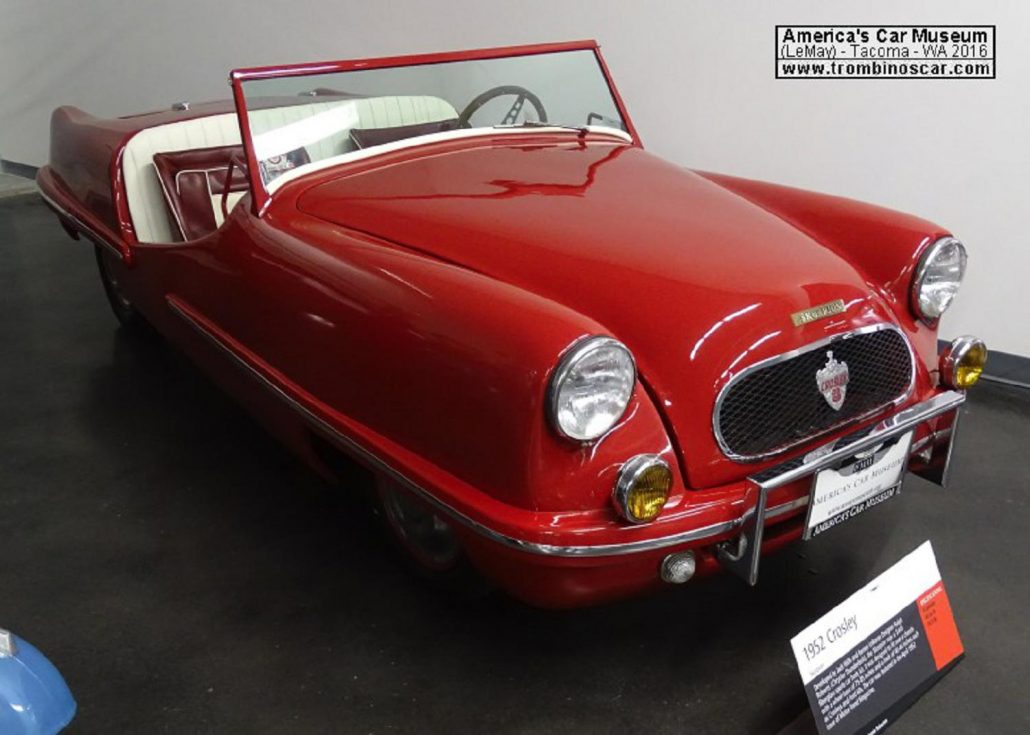 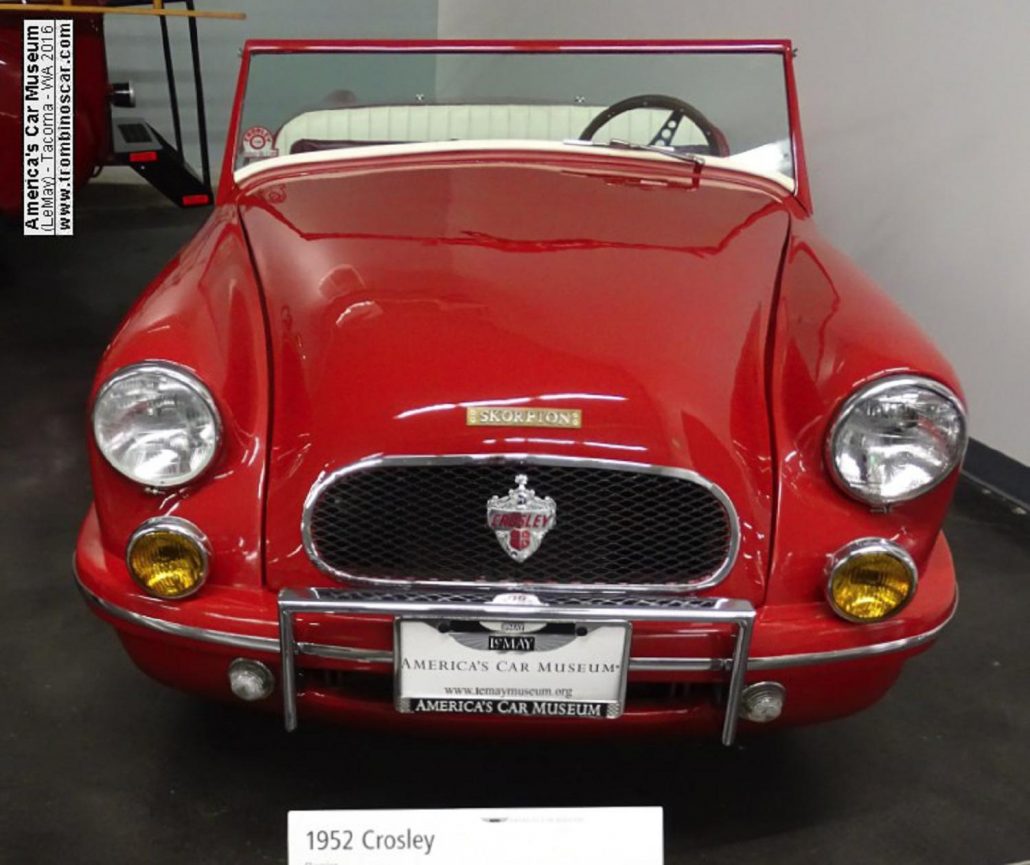 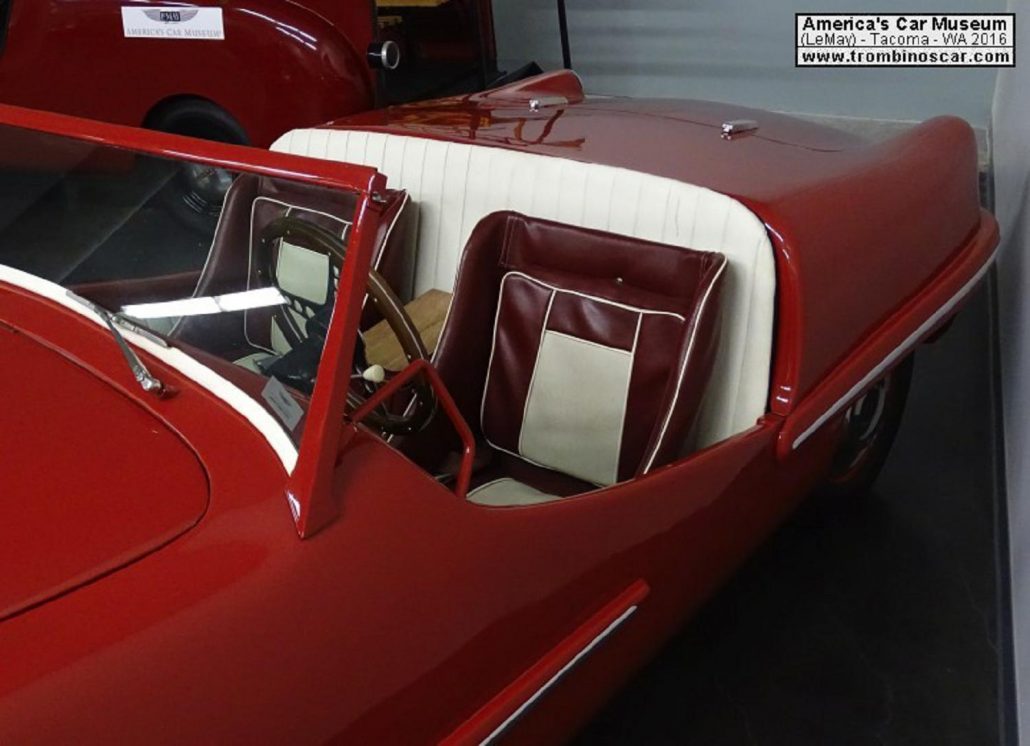 So if you’re in the northwest, be sure to check out the collection at LeMay’s: America’s Car Museum in Tacoma, Washington.  You can also check out the story we shared today on LeMay’s Motor Blog by clicking on the link below: