If you want to understand the heritage of American fiberglass cars, you have to delve into the postwar history of Sport Customs – handcrafted sports cars made in metal or aluminum and built to create an American sports car when there was only the promise of one on the horizon.  These predate the fiberglass sports car phenomenon and led directly to their production and development.

Time and time the Rogue appears as a footnote in history books and small pictures with captions appear in early automobile magazines.  But nothing in detail.  Until yesterday when I finally hit paydirt – a full page of history on the car that appeared in Trend Book 104, 1952, titled “Speed and Sport.”

“I’d rather be lucky than good…” I often say.  And yesterday’s find was one such instance.

Let’s take a look at what the staff at Motor Trend had to say in ’52 about this special hand-crafted car. 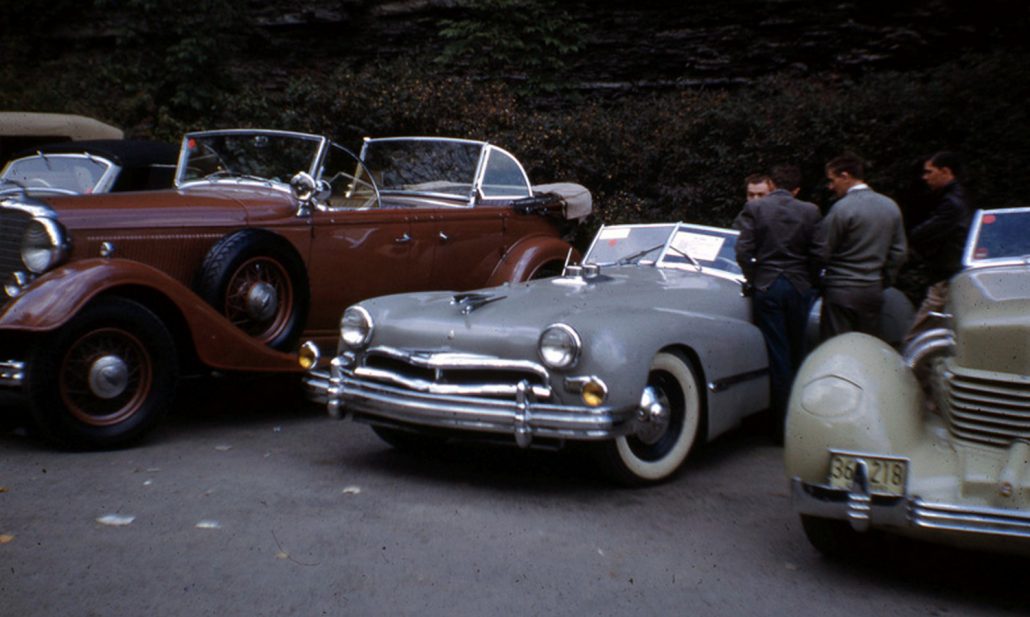 This interesting American custom-built sports car originally took shape in 1949 as brainchild of Robert A. Monroe of New York City, the finished product being the effort of Alexis Dowydoff and Monroe both.

Basically, the Rogue consists of a 1937 Dodge chassis, chopped and welded to achieve a low center of gravity.  Semi-elliptic springs are used fore and aft, with standard hydraulic shocks in front and double-acting airplane-type dampers at the rear.

Steering is of Chrysler origin, modified with a 9.75 inch pitman arm which allows 3 and ¼ turns from lock to lock.  A 1936 Auburn supplied the Lockheed hydraulic brakes with 12-inch drums, and the wheels are Cadillac with 6.00 x 16 tires.

Two front and two rear fenders from a 1946 Oldsmobile Eight are the main members of the Rogue’s roadster body, reinforced with metal plates which form the cockpit sides, hood and rear deck.  Welded together and leaded for smoothness, these components make a strong integral structure which is bolted to the frame.

The grille is from a 1950 Plymouth, the bumpers originated on a 1949 Frazer, and the windshield is from a 1937 Cord convertible.  Painted an attractive dove gray, the Rogue has comfortable seats upholstered in genuine unborn calf and a neat black top that folds into a recess in the rear deck. 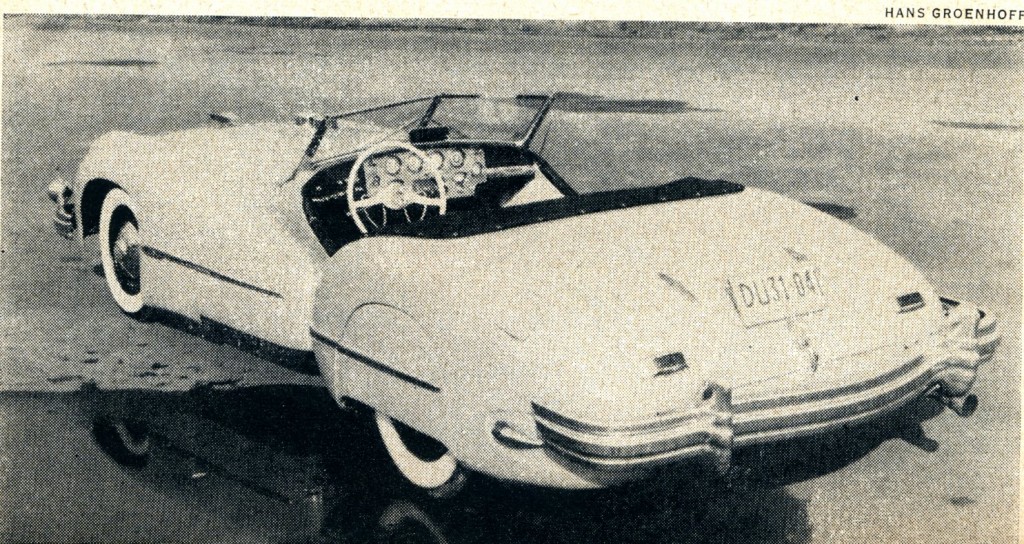 Motive power for the Rogue is supplied by a V-8 Cadillac valve-in-head engine, ported and relieved and equipped with an Edmunds dual manifold and twin Carter carburetors.  Original ignition was modified by installing a Mallory high tension coil and heavy duty Blue Streak breaker points.  Spark plugs are Champion J-11s, and the distributor now has a friction plate designed to prevent point float.

Nothing has been done to the Cadillac valves which retain their hydraulic lifters and (despite contrary experience elsewhere) function very well up to 5000 rpm, at which speed the output is about 200 bhp.  The Rogue’s transmission is a standard Cadillac Hydra-Matic connected by a short shaft to a Columbia dual-ratio rear end from a 1936 Auburn.  This provides alternative ratios from 3.25 and 4.1 to 1.

The machine has a wheelbase of 119 inches and overall length of 190 inches.  Dry weight is just under 3000 lbs., giving a very satisfactory power-weight ratio of well under 15 lbs./bhp.  This, with the 4.1 rear end, results in a 0-60 mph figure of 6.5 seconds acceleration of the head-snapping variety.

Due to accurate steering and a 45-55 weight distribution, the car has excellent roadability and remains rock steady on high speed turns.   The car has never been raced, but has taken part in several SCCA rallies and was entered for the 1950 Concours d’Elegance at Watkins Glenn.

The owners feel that while there is still work to be done on this unique machine, none of it is of a serious nature, the Rogue’s designer-builders believe they have one of the best high-powered American sports cars, regardless of price.

A few months ago, I was lucky to meet a collector who was selling his collection of photos on eBay – Herbert Roy Jaffe.  He had been a automotive designer in the  late ’40s and early ‘50s and had an eye for the special and unusual.  I had a ball talking with him and loved every minute.  One of the issues we discussed were two photos that he personally took at the 1950 Concours d’ Elegance at Watkins Glenn of the Rogue. After learning about the show and the car, we concluded our conversation and I bought the photos.

Very neat looking car!  I try and look at the detail in the pictures and put myself back at Watkins Glenn on that day in ’50.  What a day and collection of cars it must have been.  Most pictures of the Rogue show the rear end because of how pronounced and large it was relative to the more narrow front.  Both pictures here show the front of the car – perhaps Robert Monroe, owner and builder of the Rogue, lurks in one of them. 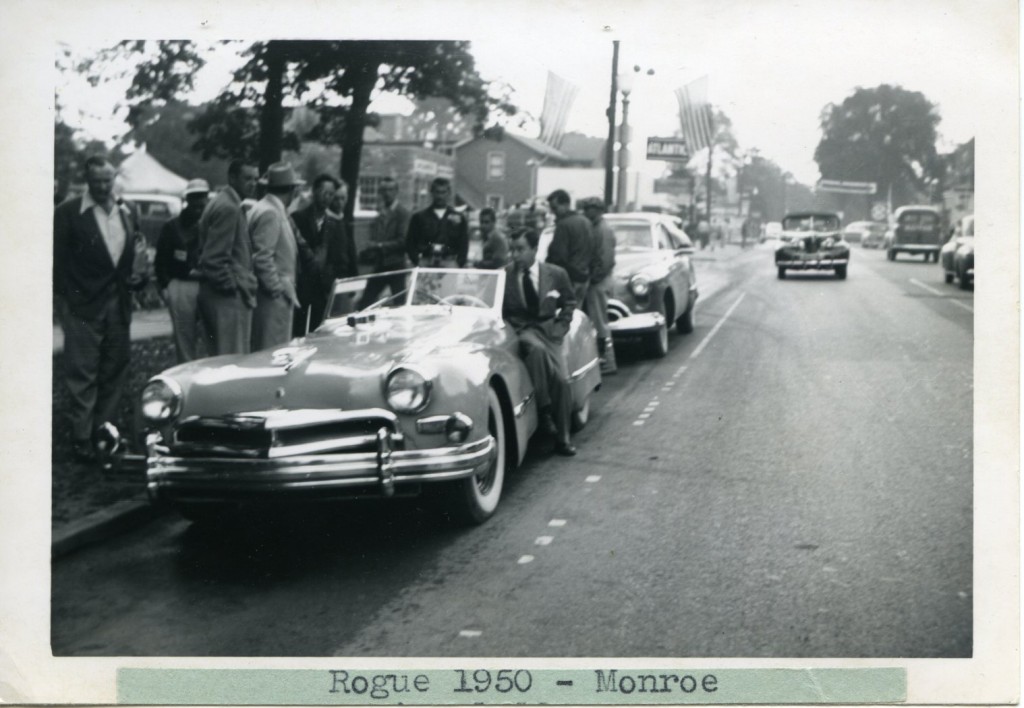 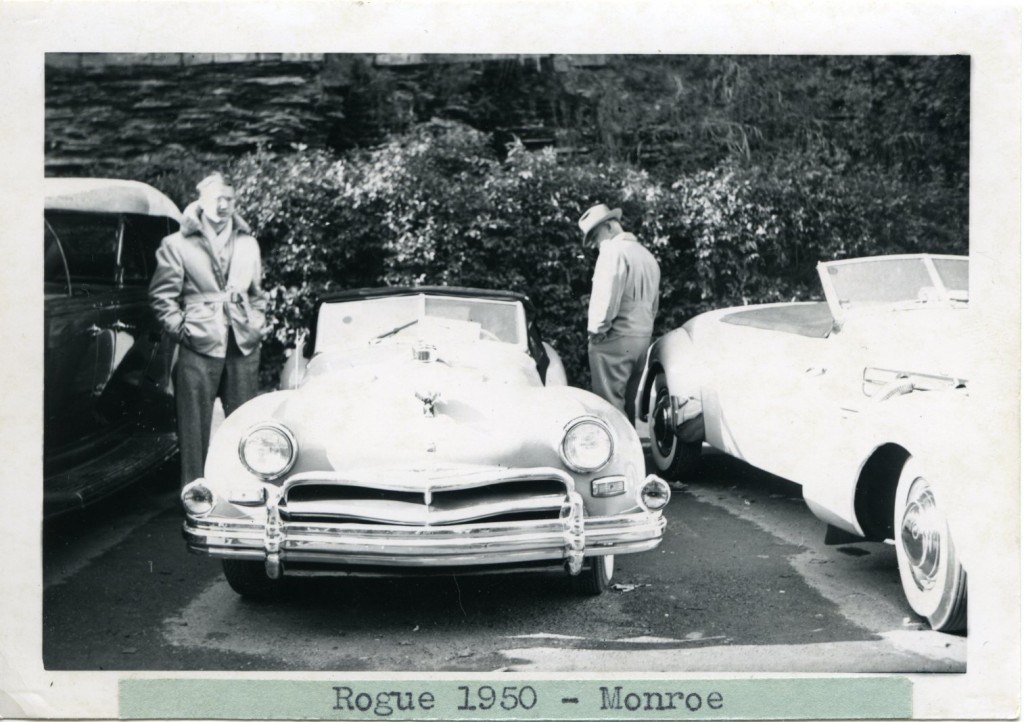 What an interesting and well thought-out car.  The choice of engine was superb – The Cadillac overhead valve engine had just come out in ’49 so this represents one of the first sport customs  built with the new lighter, more powerful and sophisticated Cadillac engine.

So where is the Rogue?  This special built car which received quite a bit of attention in the early ‘50s was never seen again.  Perhaps it is hiding in a garage in upstate New York just waiting for the right person to take the right action and ask the right question to the right individual and bring this neat car “right” back out into the open for everyone to enjoy.

So….is that “right” person going to be you?  If so….go get ‘em gang and we’ll feature your wonderful barn find here at Forgotten Fiberglass.  Oh…and Tom Cotter will probably want to talk to you too 😉

Click Here To Review All Information Known On The “Rogue”

Click Here To View All Stories On “Sport Customs” 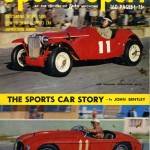 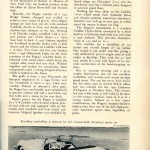 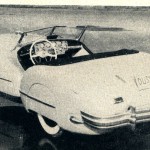 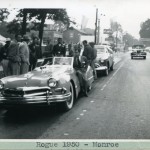 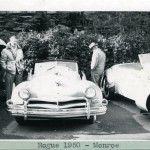 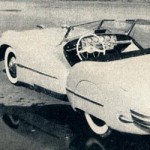