I love early postwar sports car history – especially that from the 1940s.  It’s practically non-existent.  We think of American sports and race car history as a 1950s phenomenon – and that would be correct.  Except it started years earlier – actually before World War II ended.

What we now know as the Sports Car Club of America published their first newsletter called “SportWagen” in March, 1944.  Within a year the newsletter would take on the name we know it as today which is “Sports Car.”  And that’s what makes this fascinating research to me.  The early history is the foundation of our hobby and the genesis of the sport.  How much more provocative could it be?  Let’s find out. 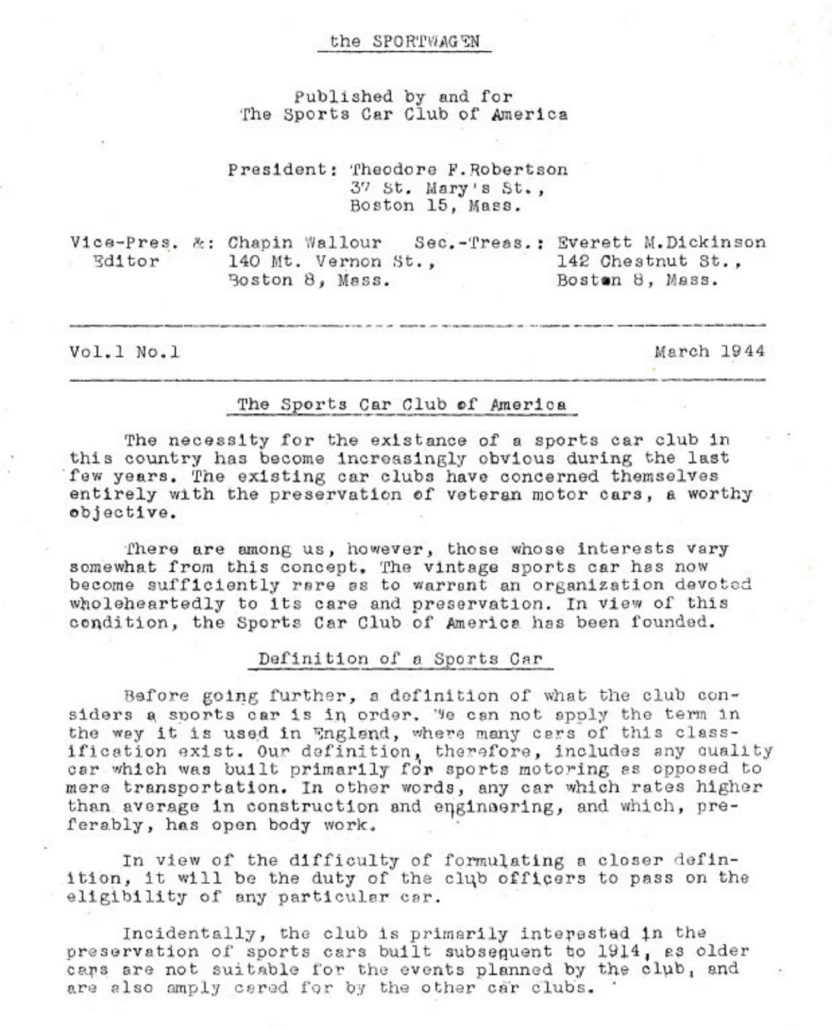 First Issue of the SCCA Newsletter in March, 1944. Back then the Newsletter Was Called “The Sportwagen”

My passion for learning about American sports car history of the 1940s isn’t shared by many people.  But one of my good friends shares this passion – and he’s one of the best researchers I know out there.  Who is this person?  None other than Joel Driskill who has shared his research with us here at Undiscovered Classics for over ten years.

Recently I saw a post of Joel’s on Facebook sharing 1940s sports car history that I had not heard of before.  I asked him if we could share his story with our readers and he kindly agreed.  So without delay, let’s hear from Joel and what he has to share about early postwar sports car history in America.   Go get ’em Joel 🙂 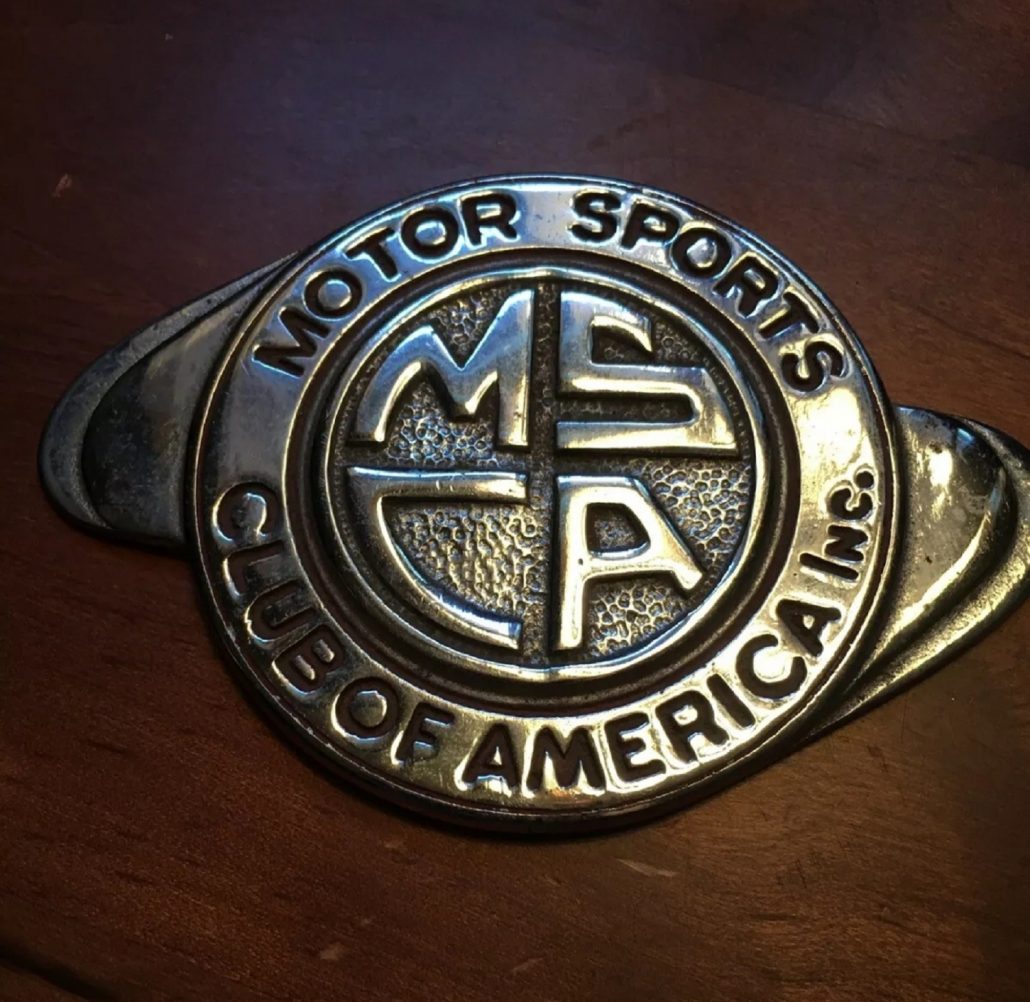 I recently was able to acquire the Motor Sports Club of America (MSCA) badge shown above for my collection. Due to the club’s almost forgotten existence and its small regional membership (northeast), I didn’t think that I would ever find one. I can’t imagine many people were looking for these and perhaps that’s how I was able to acquire it.  Here is a little context concerning the badge, and please note.  Much of the following information about the MSCA appears in the book (American Road Racing: 1948-1950) by the acclaimed automotive researcher Joel Finn.

In 1945, the Sports Car Club of America (SCCA) had a discriminatory habit, if you didn’t have the right kind of job or were from a low social standing, they would not admit you into the club. They also had an anti-Semitic streak. After being blackballed out of membership to the SCCA because of their Jewish religion, Bob Grier and Larry Kulok (both had jobs in the fashion industry in NY) decided to start their own club – the Motor Sports Club of America (MSCA). Despite the setback of being excluded from the SCCA, the formation of the MSCA would prove to be an important step in the growth of road racing in the U.S.

The SCCA at the time (1945) wasn’t a racing organization as we know it today, its mission was the preservation of prewar sports cars, as many thought the Automobile Racing Club of America (ARCA) was going to pick back up after the war where it had left off – which we know  never did. After formation, the MSCA almost immediately held informal hill climbs and rallies in 1946, which made it the first sports car club to hold events postwar. When John Bentley (period author concerning sports cars) joined the club, he took over as the competition director and the hill climbs took a more serious tone.  Road and Track Magazine’s first issue (June 1947) covered one of MSCA’s more formal hill climbs at Mohansic Lake.  This Road & Track article is shown at the end of today’s story.

The MSCA’s popularity among sportscar owners was evident in fact that they grew to be larger than the club that had rejected Grier and Kulok. This was despite the fact that the MSCA was a NYC centric organization compared to the SCCA’s nationwide membership. The growth of the club was mostly because the MSCA had no criteria to become a member (other than being a sports car enthusiast) and they were the only sports car club that organized racing.

Many members of the SCCA joined the MSCA, including Alec Ullman who formed the SCCA’s NY metropolitan region and was a former ARCA member. Although the MSCA never put on a true road race that I know of, their activities pushed the SCCA’s members to demand the SCCA hold events and eventually loosen its requirements for membership. Without this impetus, the first postwar road race may not have been Watkins Glen and the SCCA may have become a completely different organization.

Johnny Von Neumann was on the East Coast in 1948 for business and attended one of MSCA’s events. Their event severed as an inspiration for him to hold his own events back in California. This inspiration helped form the California Sports Car Club on the west coast.I would explain how big of a deal this became but that story will have to wait for another day.

There is a lot about this MSCA badge that I love: its rarity, historical importance, and its symbolism of inclusion and diversity – an openess to all which helped make the organization better – even if it was just a flash in the pan. 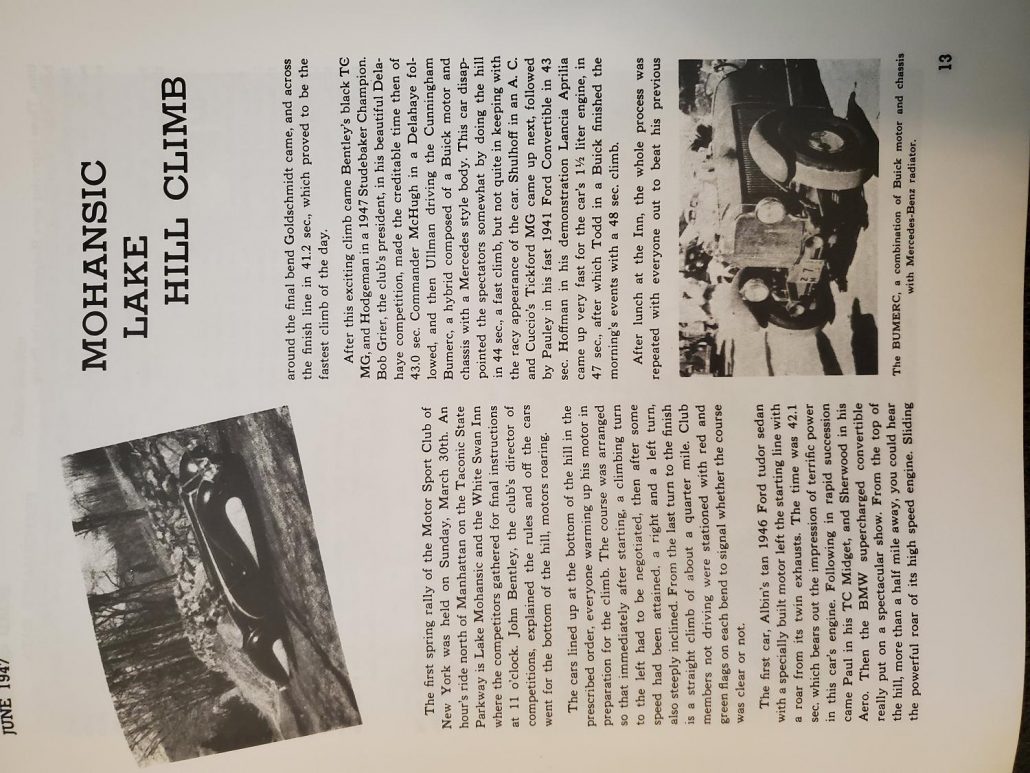 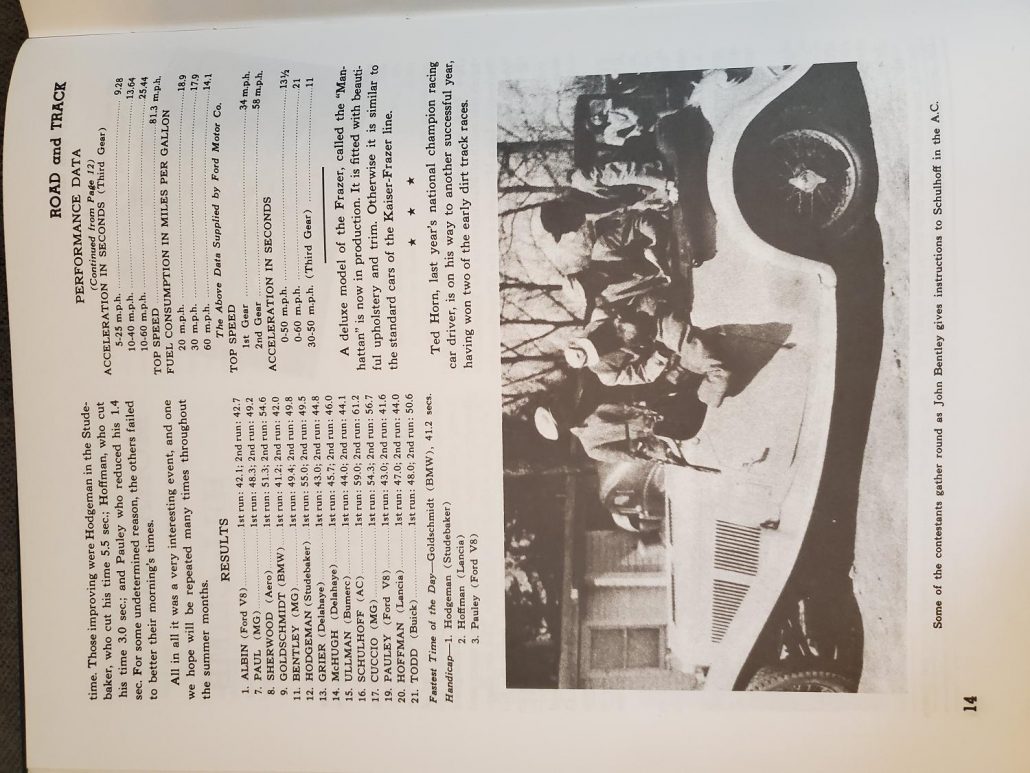 Great thanks to Joel for sharing his story today – history which I had never heard of until he graciously shared it with all of us.  Thank you Joel.  For those of you who would like to read more stories that Joel has shared with us here at Undiscovered Classics, click on the link below.