I was introduced to John Bucci in 2011 via my friends in Chicago at the time – Guy Dirkin and Carole Jackson.  In preparing for the Milwaukee Masterpiece Concours d’Elegance, they had asked me to stop by and see John and some of the cars and artwork he created over his lifetime – much of it in fiberglass.  Once we talked and set a date to visit, the excitement began to build.  What would I see?  What cars did he make?  Little did I know that this would be the start of a friendship that would last the rest of John’s lifetime. 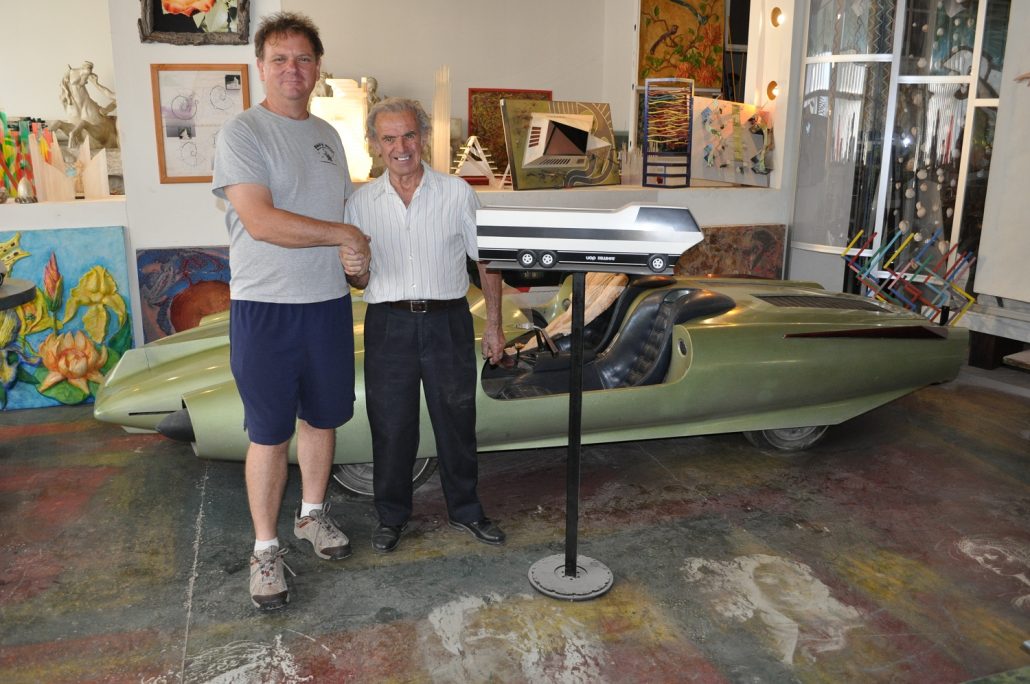 Geoff Hacker (L) John Bucci (R) in 2011 in front of his first car called “LeShabble”; or “The Sword” and a model of the Executive RV/Tranport Vehicle he later built. Both the Car and the full size RV/Transporter Survive today.

Giovanni “John” Bucci was born in 1935 and came to the United States in 1959 after living for five years in a refugee camp in Udine, Italy.  During that time he attended courses in electronics at Torino, Italy.  Bucci became a refugee after his disillusionment with not being accepted in the Yugoslavian Air Force.  At 21, Bucci had graduated from electrical engineering school in his occupied suburb of Trieste, and was planning to be a pilot.  “They rejected me as not a trusted Communist,” Bucci said.  “But they were right.  After that, I told my mother I wanted to go where there was freedom.”

So on September 21, 1955 Bucci borrowed a bicycle.  Taking along only four engineering books, he escaped across the Yugoslavian border.  With thousands of other Italo-Yugoslavians he was placed in a refugee camp in Northern Italy where he worked as a cook. “Six of us cooked pasta in 250 pound cauldrons over a coal fire.  It was not easy to feed 2,000 refugees a day.  It was not easy to lift those pots,” he recalled.

“Because I was handy, my camp director would rely on me to fix the flood lights and would send me into town some times to fix electrical generators,” said Bucci.  “Then I would look at sports cars and study their designs.”  In 1959, after Eisenhower’s refugee bill passed Congress, Bucci came to the United States.  Arriving in Chicago, he got his first job at Zenith Corporation.

Intrigued with the idea of building a sports car and challenged by his limited amount of tools and money, he worked until 3am every night designing and building.  He began to feel the pressure “because I had to be at work at 8am but didn’t have the heart to give it up,” said Bucci.  On New Year’s Eve, 1961, after eight months of work, “I drove the sports car for the first time,” said Bucci.  The streamline futuristic body of his car caused police to investigate the calls from curious residents.

“The police stopped me and asked me what planet I had come from,” said Bucci.  “Little did they know that under the sportscar body was a four cylinder engine.”

Note: We’ll share the full article above from 1978 in a future story here at Undiscovered Classics.

John built five vehicles for himself during his lifetime.  Some of these were concepts to be marketed and all were designed to attract attention for cars and projects he would build for others.  Let’s check out the five cars Bucci is best known for:

Car 1: 1961 Oil Pursuer – also known as La Shablle which John Said Meant “The Sword” as well as the “Astro”

As mentioned in the story above, Bucci finished his first vehicle in 1961.  In the 1960s, he changed both its name an appearance several times.  He held onto this car for his entire life. 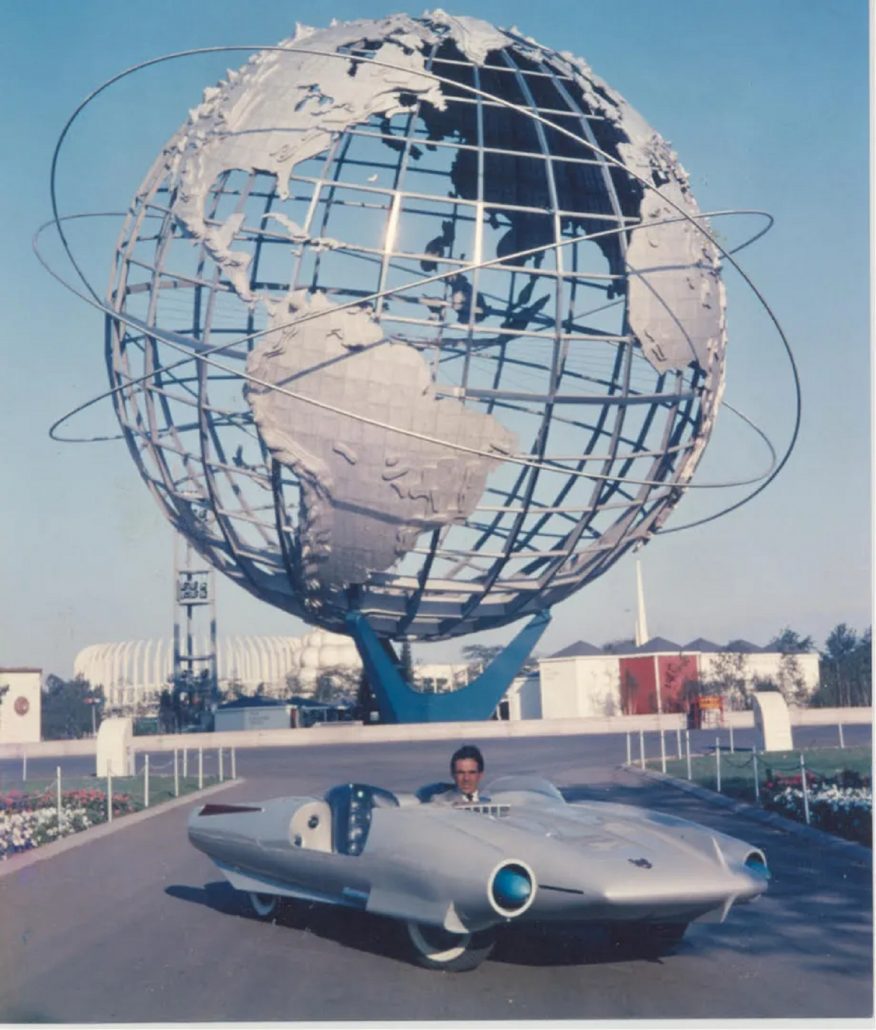 The Unisphere is a spherical stainless steel representation of Earth in Flushing Meadows–Corona Park in the New York City borough of Queens. The globe was designed by Gilmore D. Clarke as part of his plan for the 1964 New York World’s Fair. Commissioned to celebrate the beginning of the space age, the Unisphere was conceived and constructed as the theme symbol of the World’s Fair. The theme of the World’s Fair was “Peace Through Understanding”, and the Unisphere represented the theme of global interdependence, being dedicated to “Man’s Achievements on a Shrinking Globe in an Expanding Universe”. 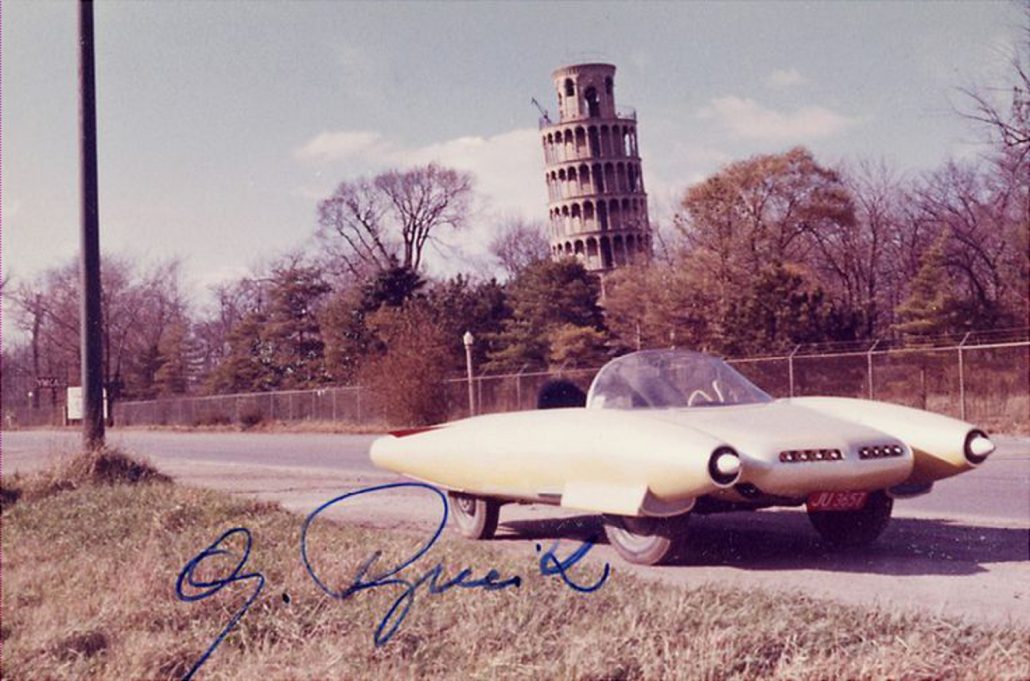 The Chez Paree was a Chicago nightclub known for its glamorous atmosphere, elaborate dance numbers, and top entertainers. It operated from 1932 until 1960 in the Streeterville neighborhood of Chicago at 610 N. Fairbanks Court. The club was the epitome of the golden age of entertainment, and it hosted a wide variety of performers, from singers to comedians to vaudeville acts. 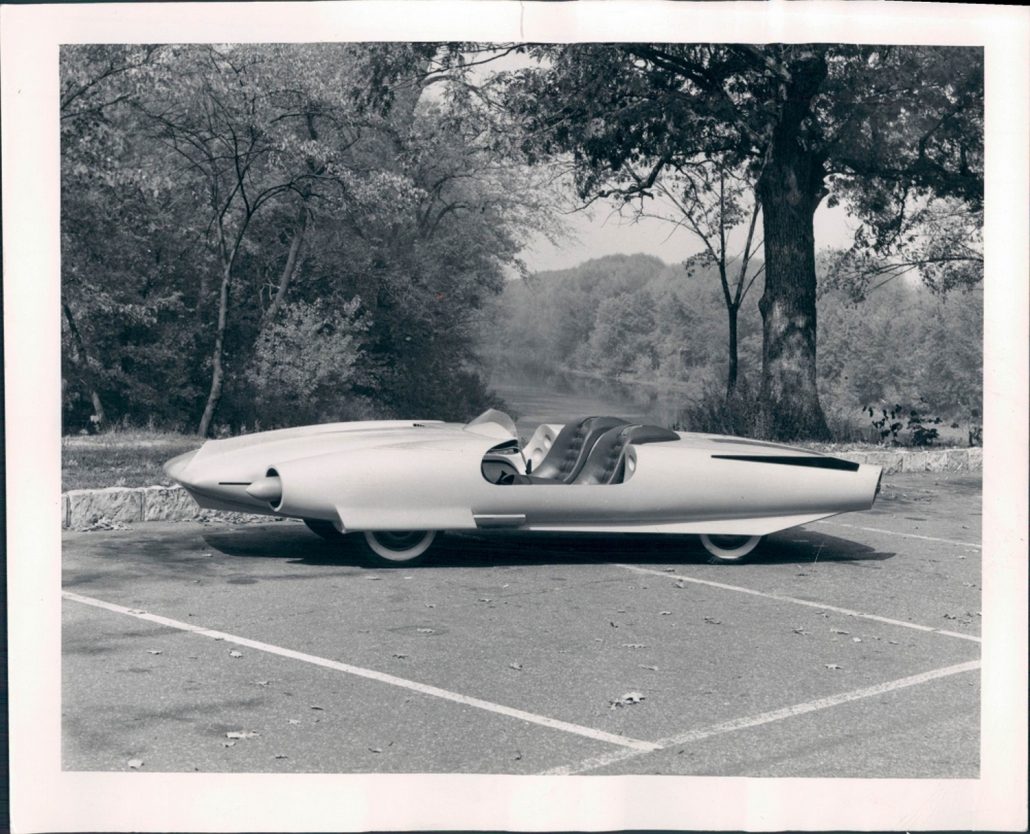 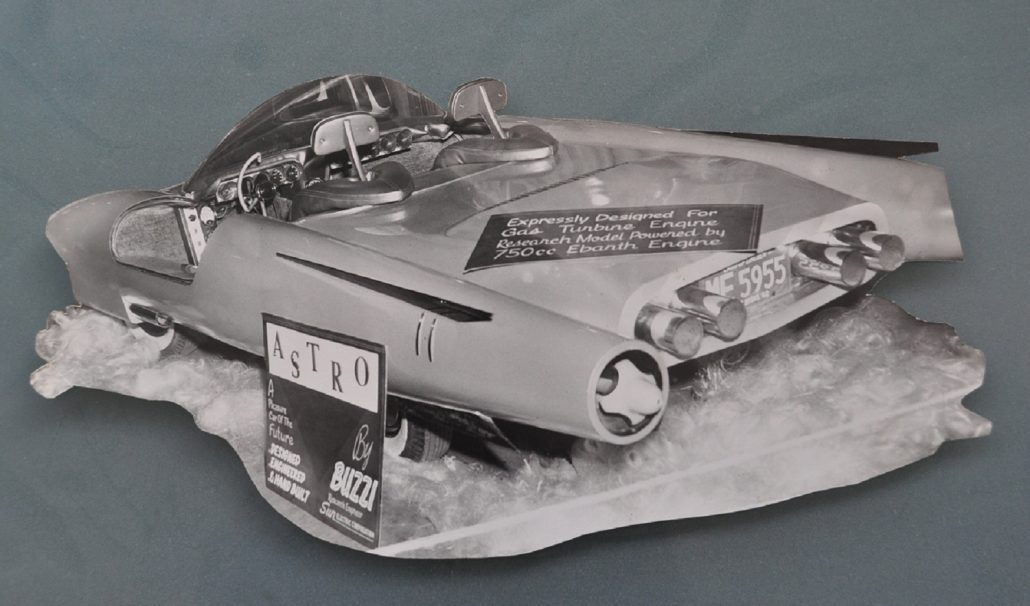 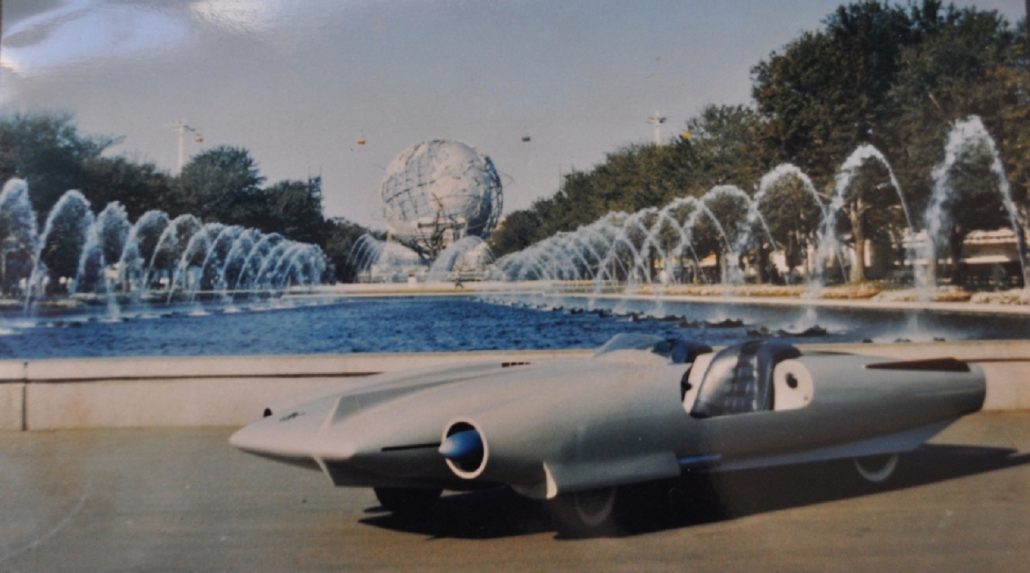 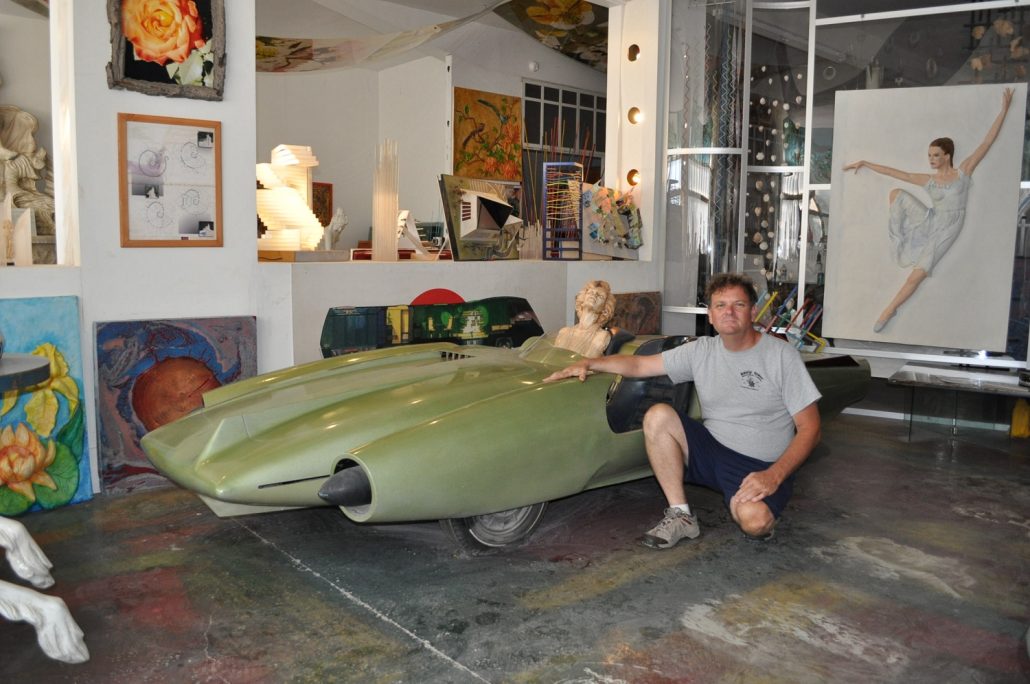 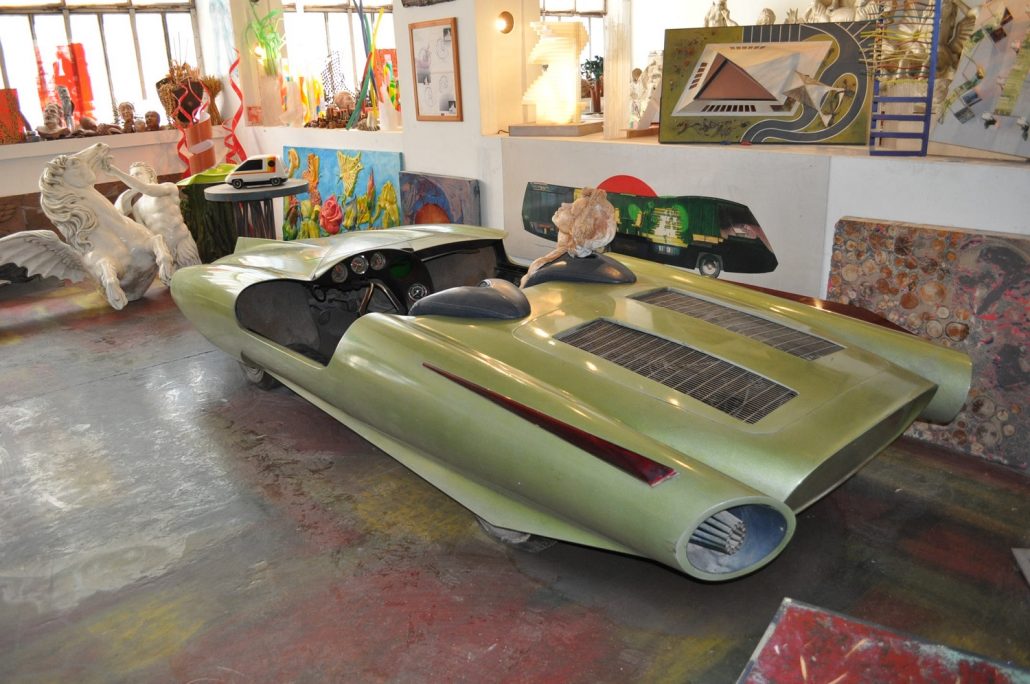 Bucci built his Trieste 1 (Porsche) and Trieste 2 (mock up with longer wheelbase) in 1966 and 1967.  In 1967 he took the Porsche-based Trieste I to Europe for a long summer season and showed the car throughout the continent.  Bucci kept Trieste I for his entire life.  Trieste 2 was lost around 1990 and never completed. 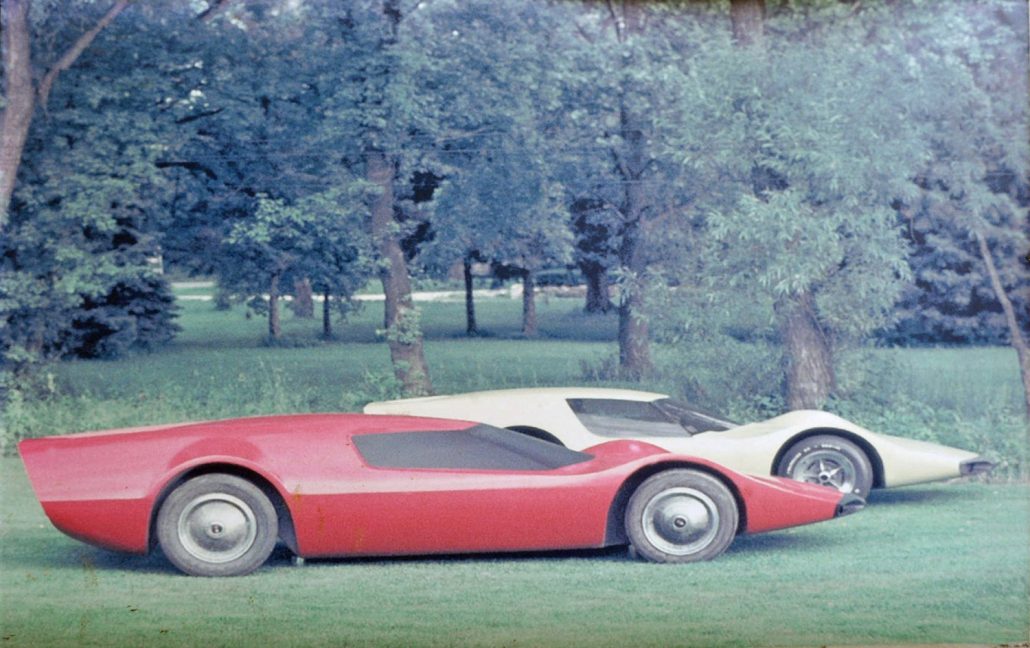 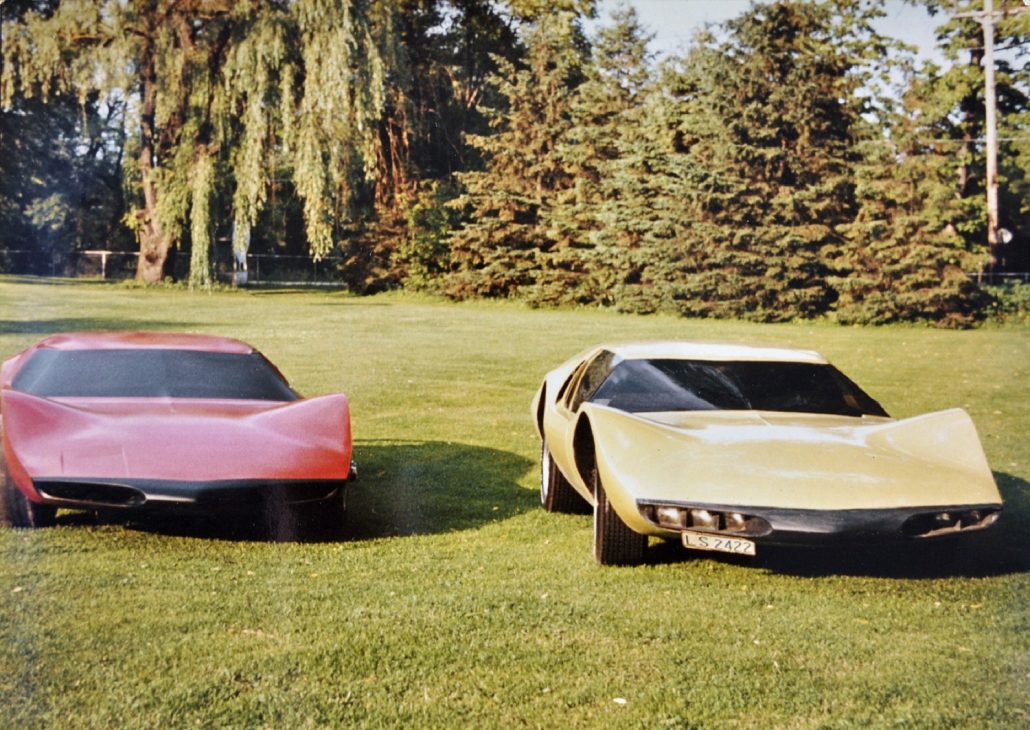 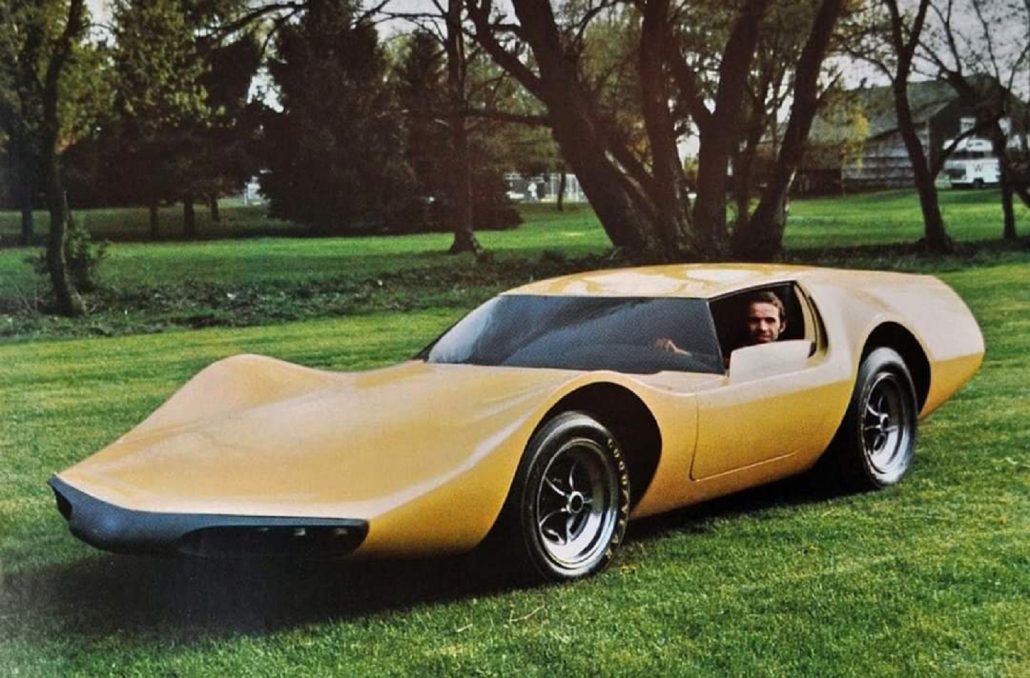 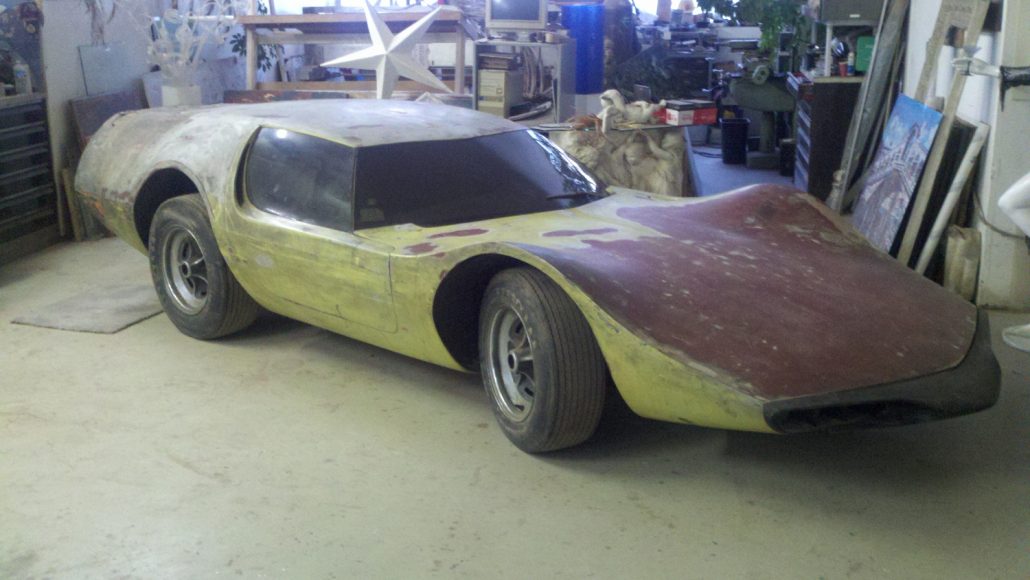 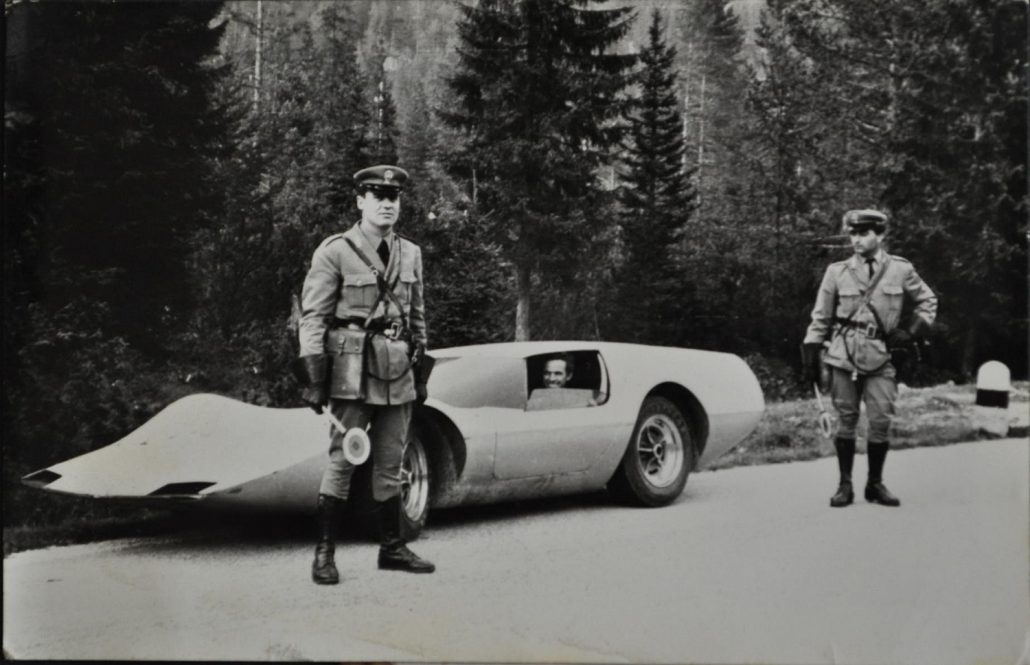 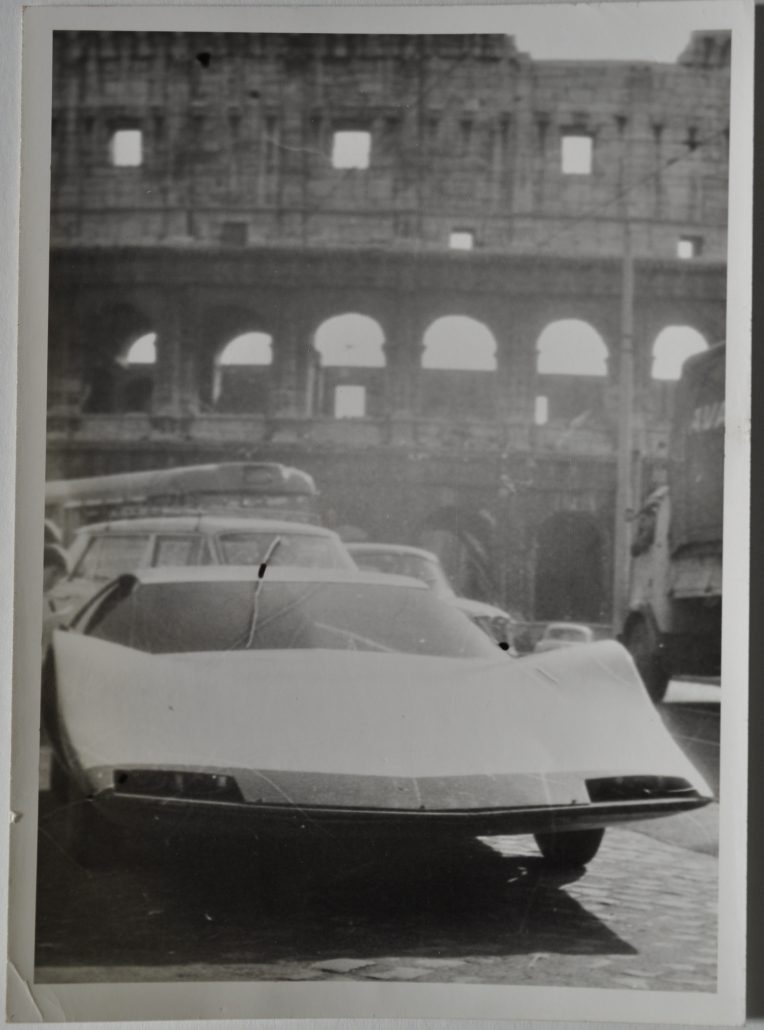 The 1966 Trieste I in front of the Roman Colosseum in Rome, Italy. 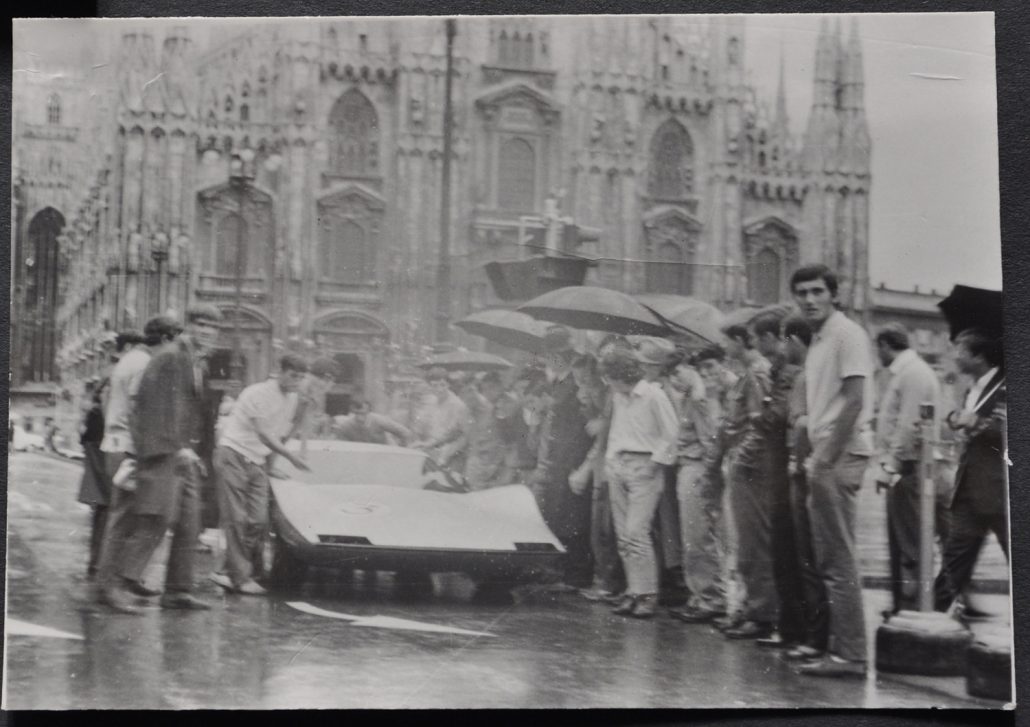 Bucci’s Trieste I in front of the Milan Cathedral (Italian: Duomo di Milano) or Metropolitan Cathedral-Basilica of the Nativity of Saint Mary. The cathedral took nearly six centuries to complete: construction began in 1386, and the final details were completed in 1965. It is the largest church in Italy.

The Executive Van is a concept vehicle which included a meeting space and slide show facility.  It also had a fireplace, bar, waterbed, complete bath and a floor where twenty people can dance.  The roof of the Executive slides away enabling the dancers to be half in and half out while the van is in place or being driven.  Bucci canvased the United States and Canada in his Executive Van showing his concept and gaining interest in this and other projects.  As you can see in the photos below, he even took his Executive Van on a European tour shipping it via the Queen Elizabeth II cruise ship. 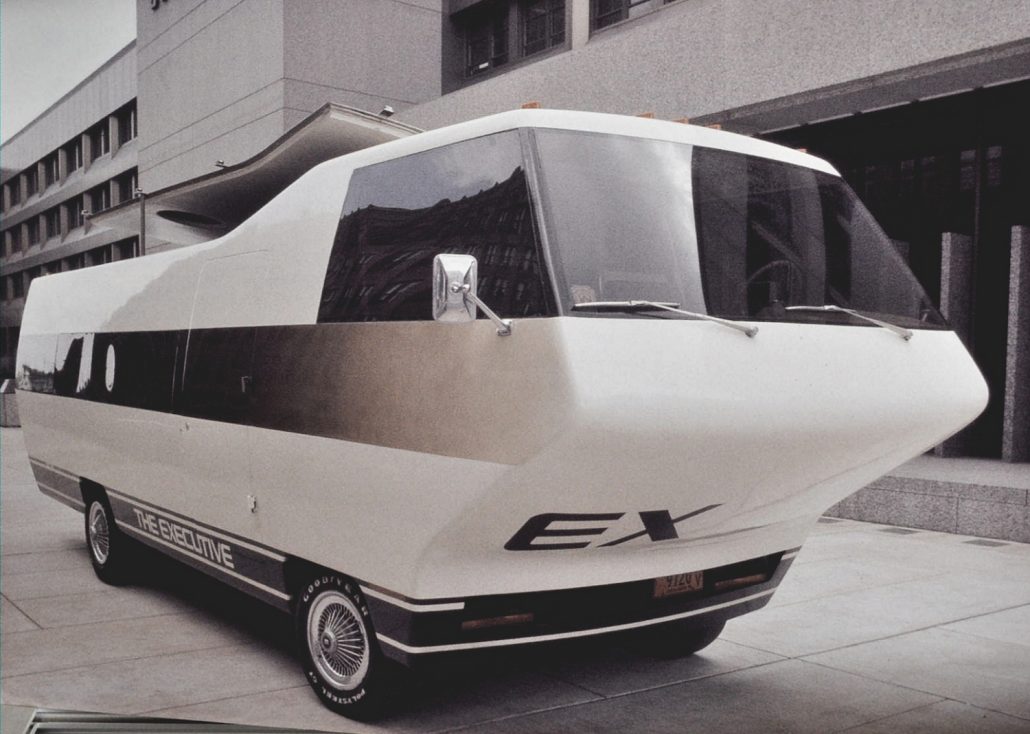 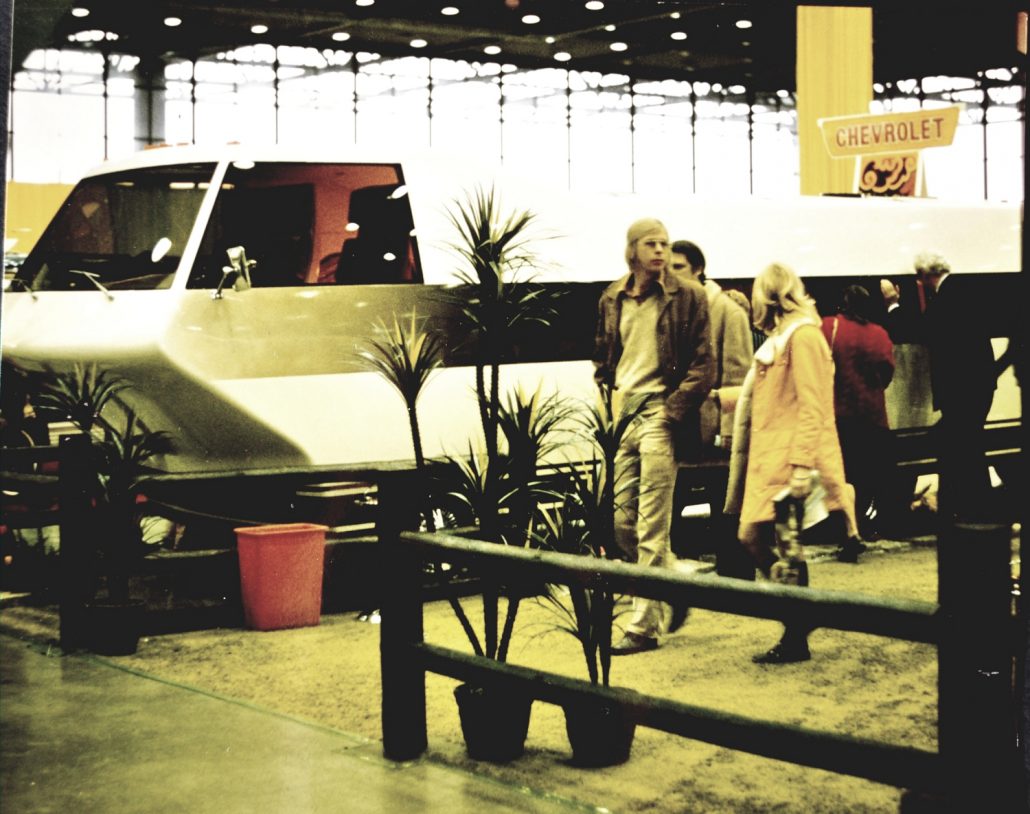 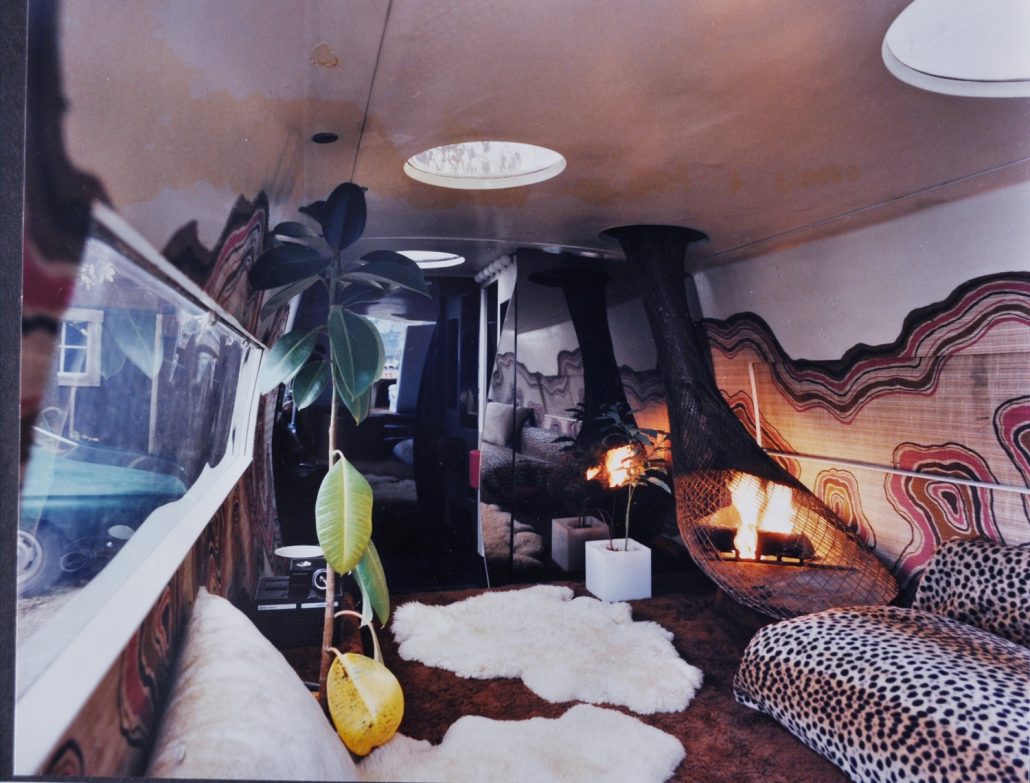 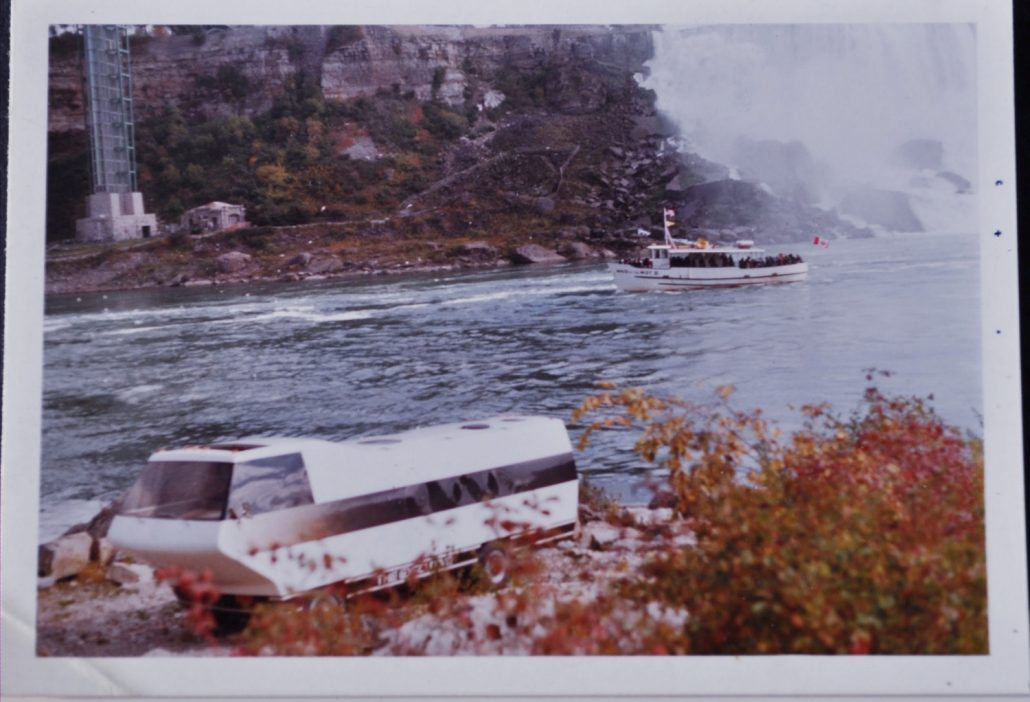 Canada Visit: The Executive on the Canadian side of Niagara Falls. You can see the tour boat, “Maid of the Mist” in the distance. 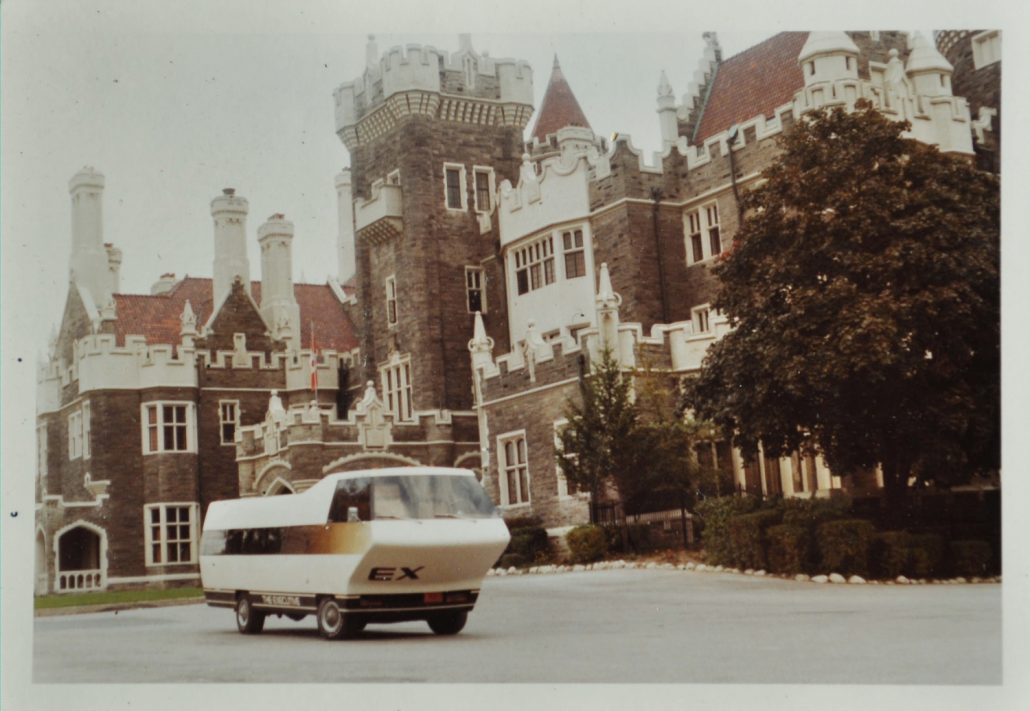 Canada Visit:  Here the Executive is in front of Casa Loma Castle in Toronto, Canada.  Casa Loma is a Gothic Revival style mansion and garden in midtown Toronto, Ontario, Canada, that is now a historic house museum and landmark. It was constructed from 1911 to 1914 as a residence for financier Sir Henry Pellatt. 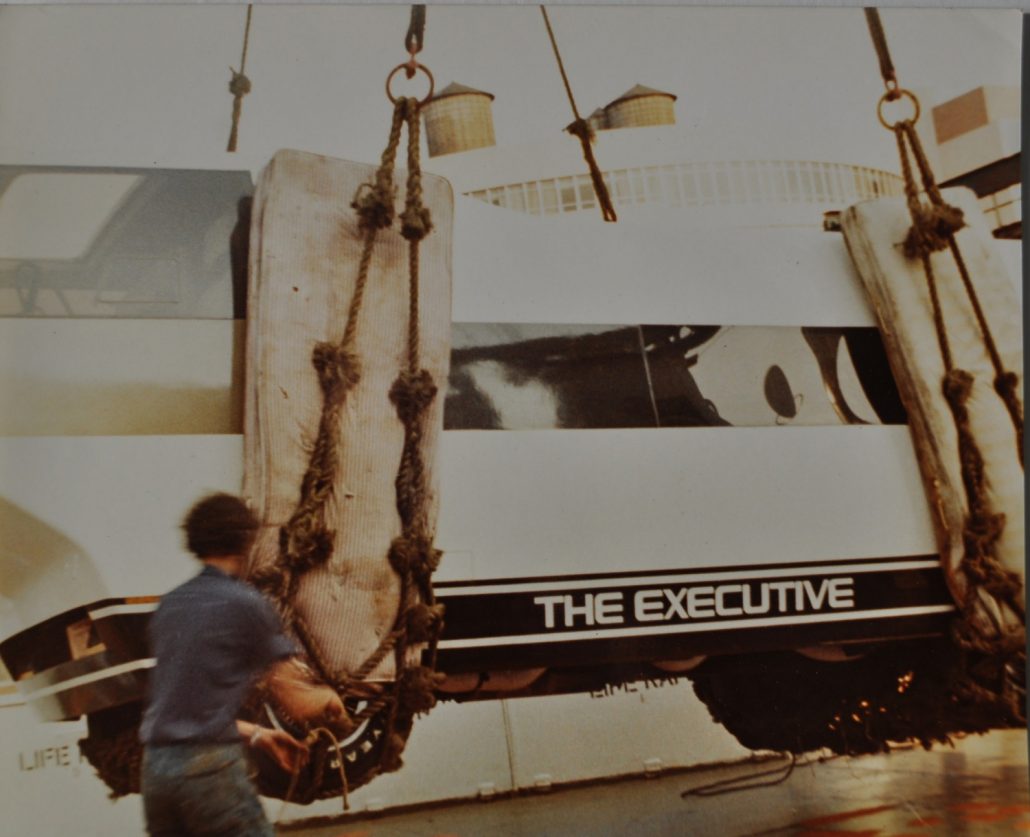 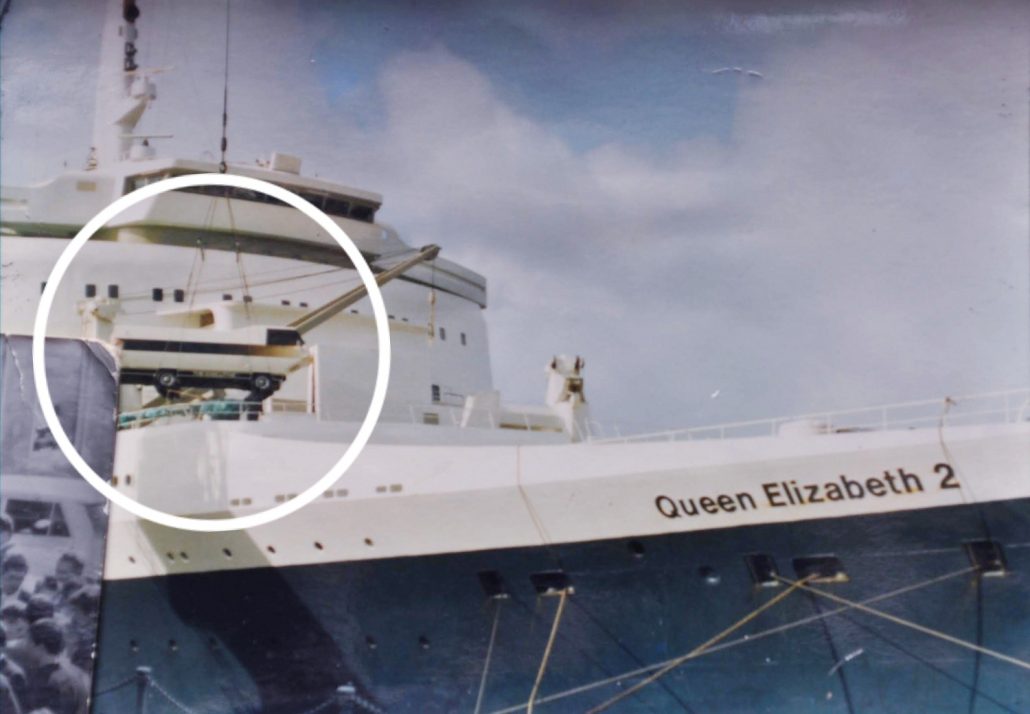 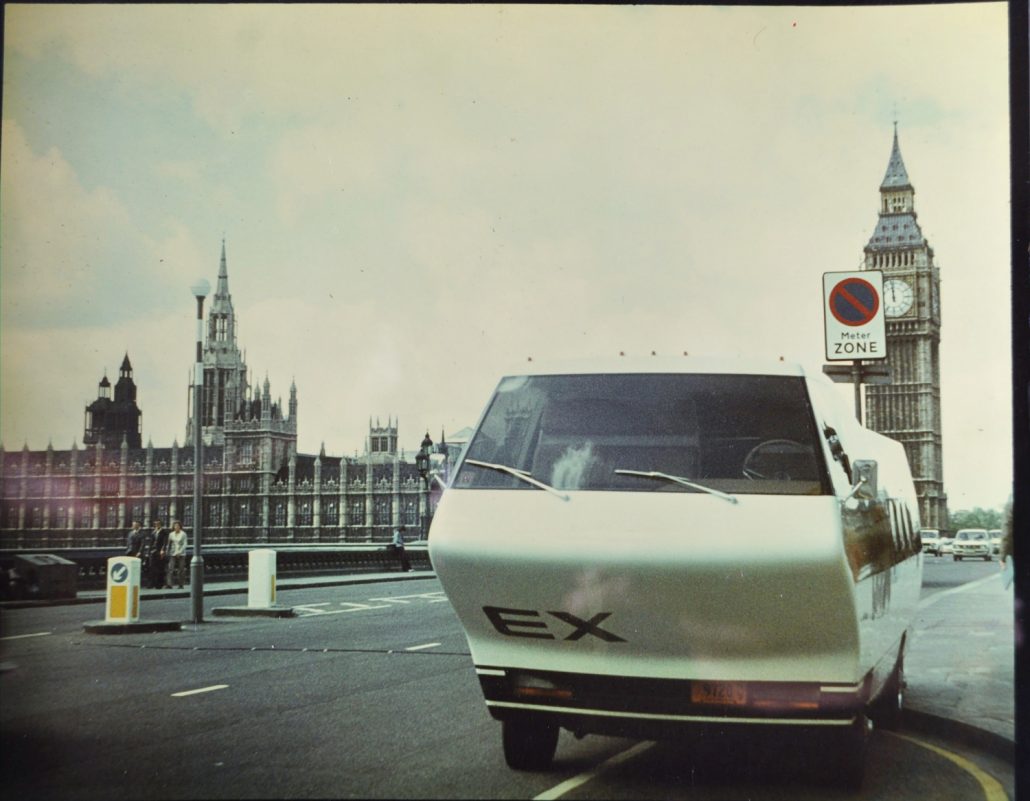 European Visit: The Executive in London, England in Front of Big Ben and Parliament

John built just one Gina and debuted it at the 1976 Chicago Auto Show in McCormick Place as a kit car soon to be in production.  The Gina was built to fit on a VW chassis and was designed with styling similar to the Ferrari Dino.  Soon after the show, the car was destroyed when a roof cave in resulting in the loss of the car and the molds. 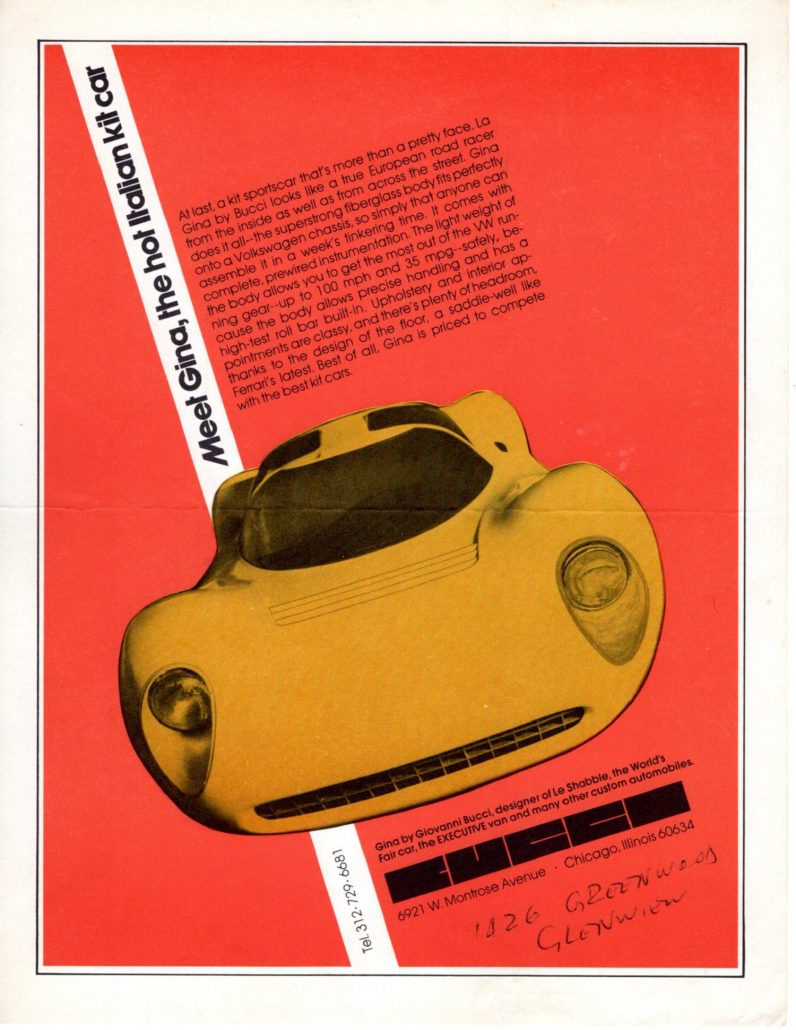 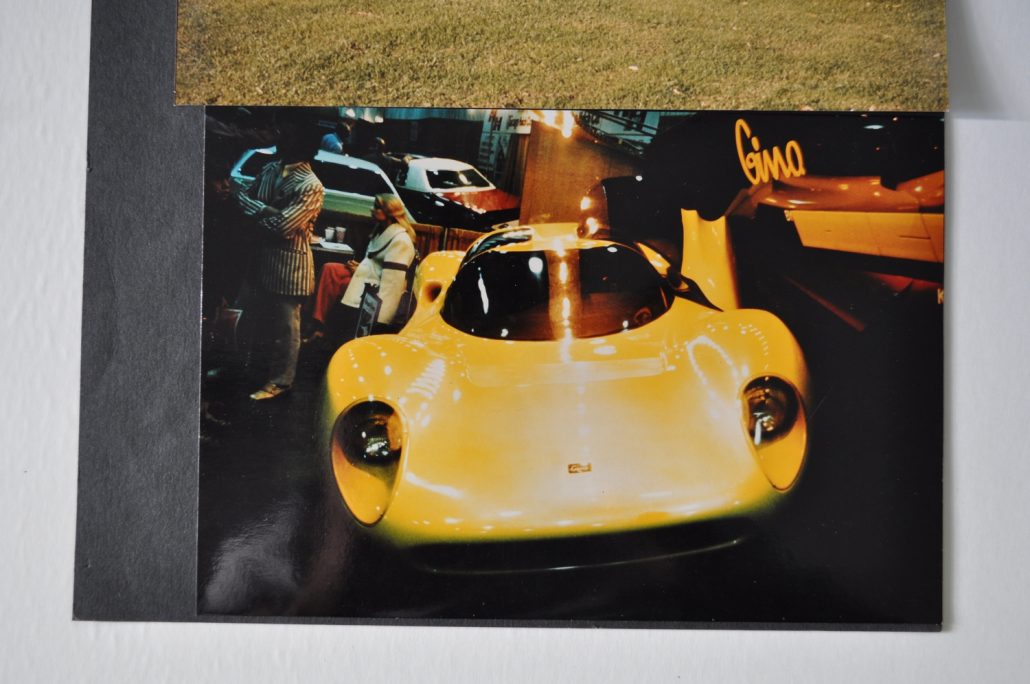 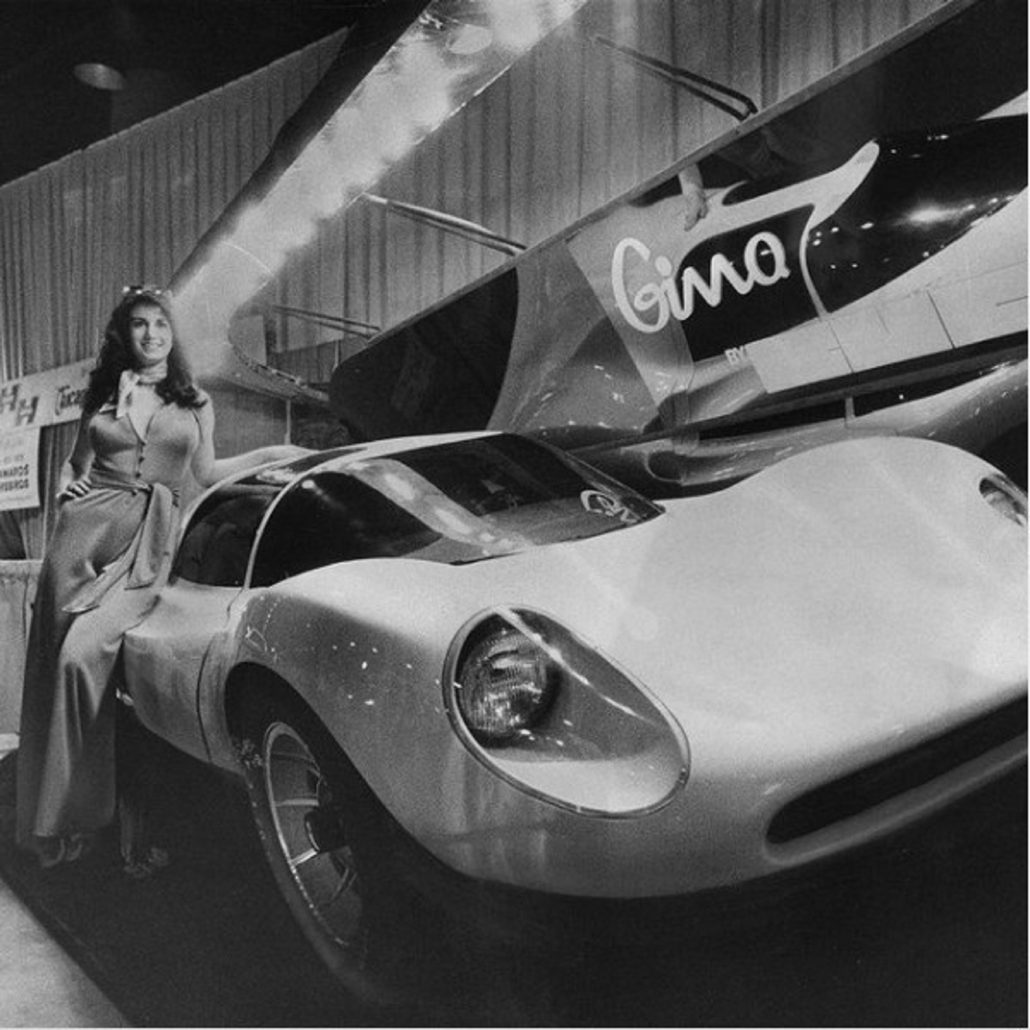 Below is a 3 minute video from 2010 where John Bucci talks about his life and his vision of everything he creates.

Three of John Bucci’s cars survive today – two in the Undiscovered Classics collection (the Executive Van and the Porsche Trieste I) while the 1961 World’s Fair car resides in a collection in Europe.  In future stories here at Undiscovered Classics, we’ll go into greater detail on each of these cars.  But as you’ll learn, cars were just part of John Bucci’s artistic life.  His enthusiasm for design was part of everything he did including sculptures, homes, commercial buildings, tools, dance clubs and more.  I’m honored to be able to share his story.