It’s been an adventure trying to get all the stories of “building your own car in the ‘50s” nailed down so many years later.  And this story about the Sierra Sportcar Frame has been one of the toughest to get of them all.  It all started with Harold Pace – about 5 years ago.

Harold had just returned from a talk in San Antonio, Texas where he listened to several folks discuss race car engineering and design.  One of these folks was Bill Jones who as part of his discussion shared information about his company in the early 1950s which built the “Sierra Sportscar Frame.”

Ok….we’ve tracked down Ed Martindale and Ted Mangles who owned Mameco frames.  We found the folks who built the frames for the Chattanooga Boiler and Tank Company.  Other frame companies included Kurtis, Manning, Multiplex, Shorty Post, Triplex in Chicago – not to mention that you could buy frames from Bangert, Glasspar, Kellison, LaDawri and Woodill Wildfire.  But Sierra?  It was completely new to us, and this company had been located in Oklahoma City, Oklahoma.

Lucky for me, near the time Harold shared this information with me I had also located an ad for the Sierra frame – it appeared on the inside back cover of a magazine published in 1953 called “Cars of Today.”  This was a special one edition magazine for 1953 published by the editors of “Speed Age Magazine” – a reputable magazine of the era. Click here to read more about this magazine. It was this information that I came armed with when I called Bill Jones to discuss his memory of the company – and ask him about the booklet on his frame company shown in the ad.

Sadly, Bill wasn’t able to find a copy of his booklet at the time, but I’m excited to share that just last month we located a copy of the 6-page booklet.  It took about 5 years, but we can begin sharing the story of the Sierra Sportscar Frame with today’s article – a frame designed and built by the Bill Jones Accessories Company of Oklahoma City, Oklahoma.

So far we’ve found just one ad for the frame – as mentioned above.  Bill Jones thought that might be the only ad he placed, but we continue to look for more advertisements out there.  The cover of the magazine and the ad appears below along with the ad and close-ups of parts of the ad.  And check it out – Caroll Shelby was a driver who tested this frame for them – during its development in 1952. 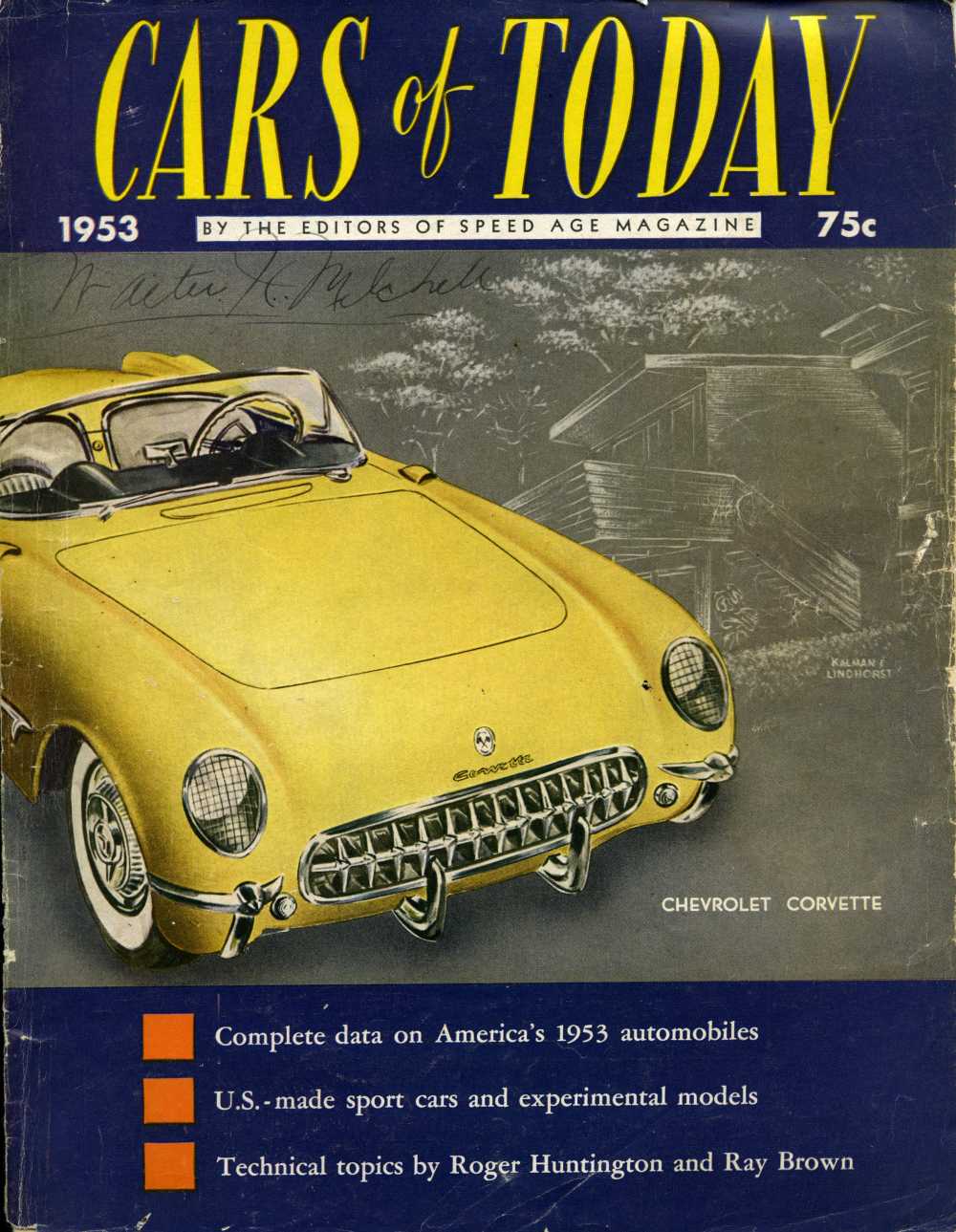 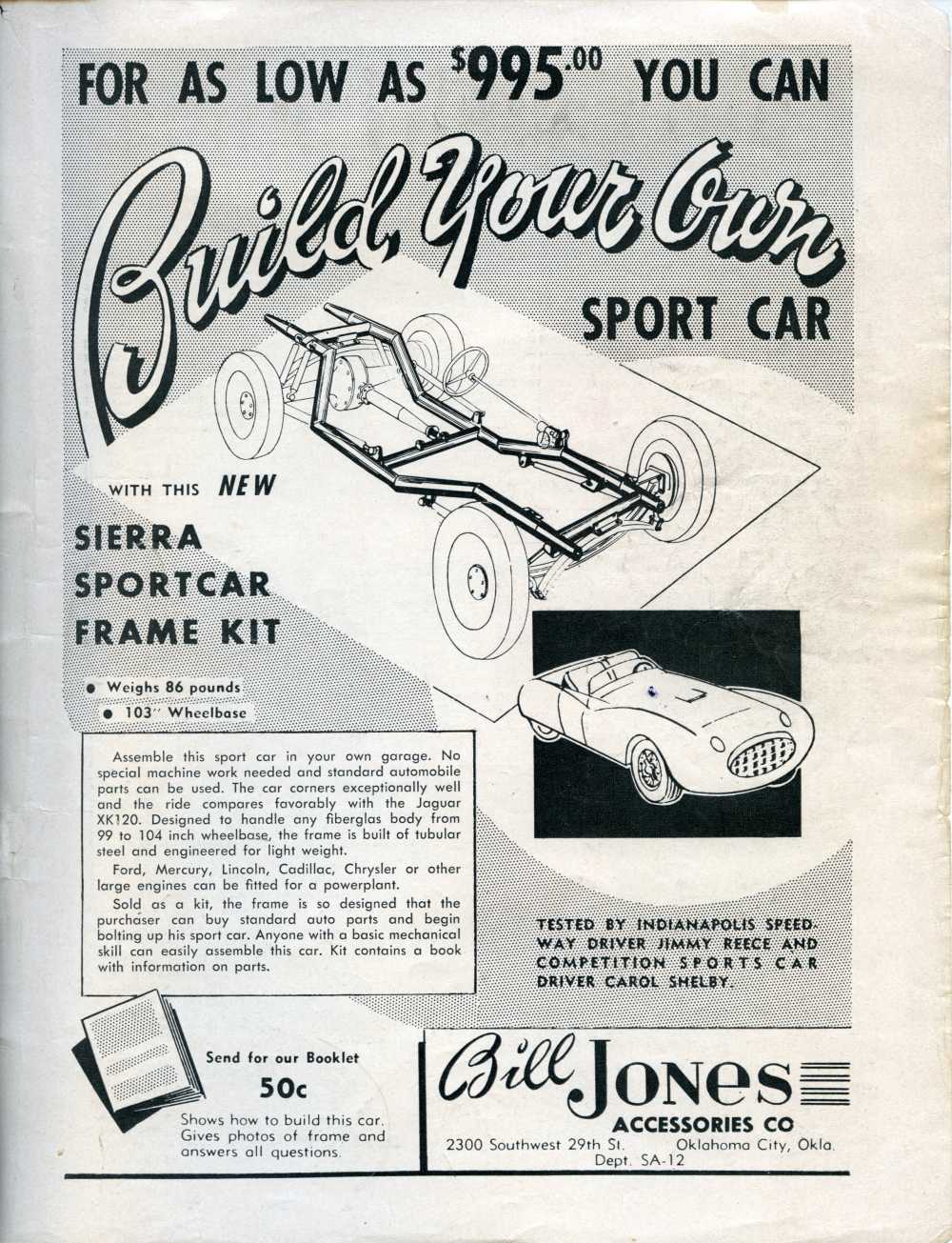 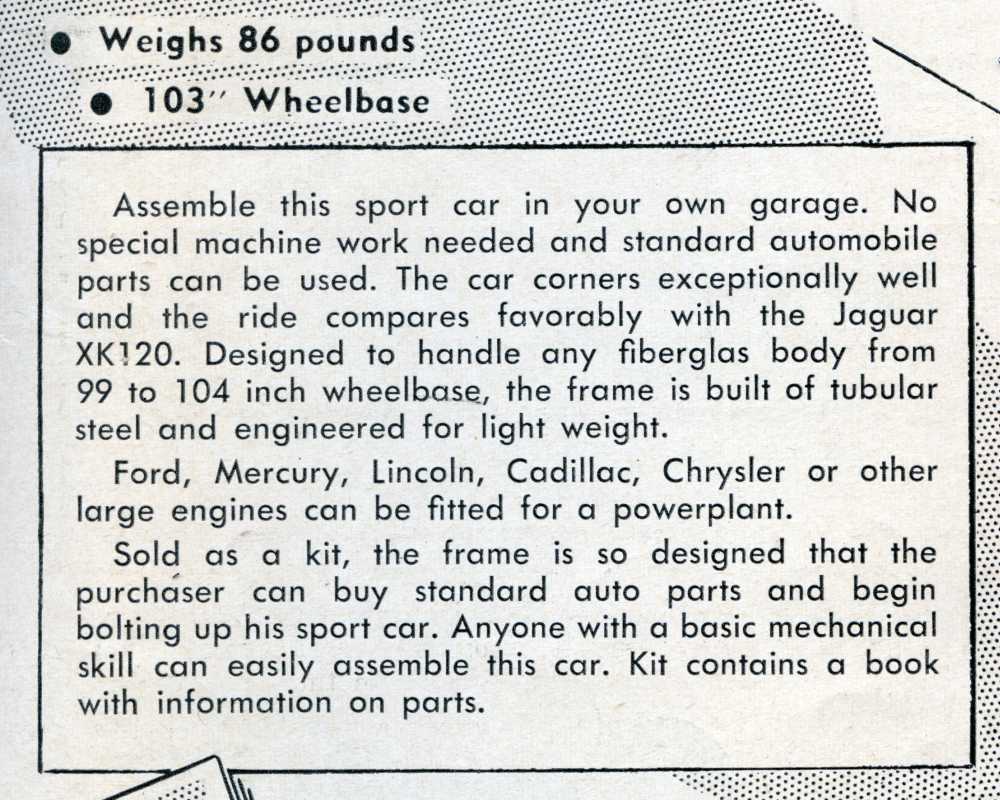 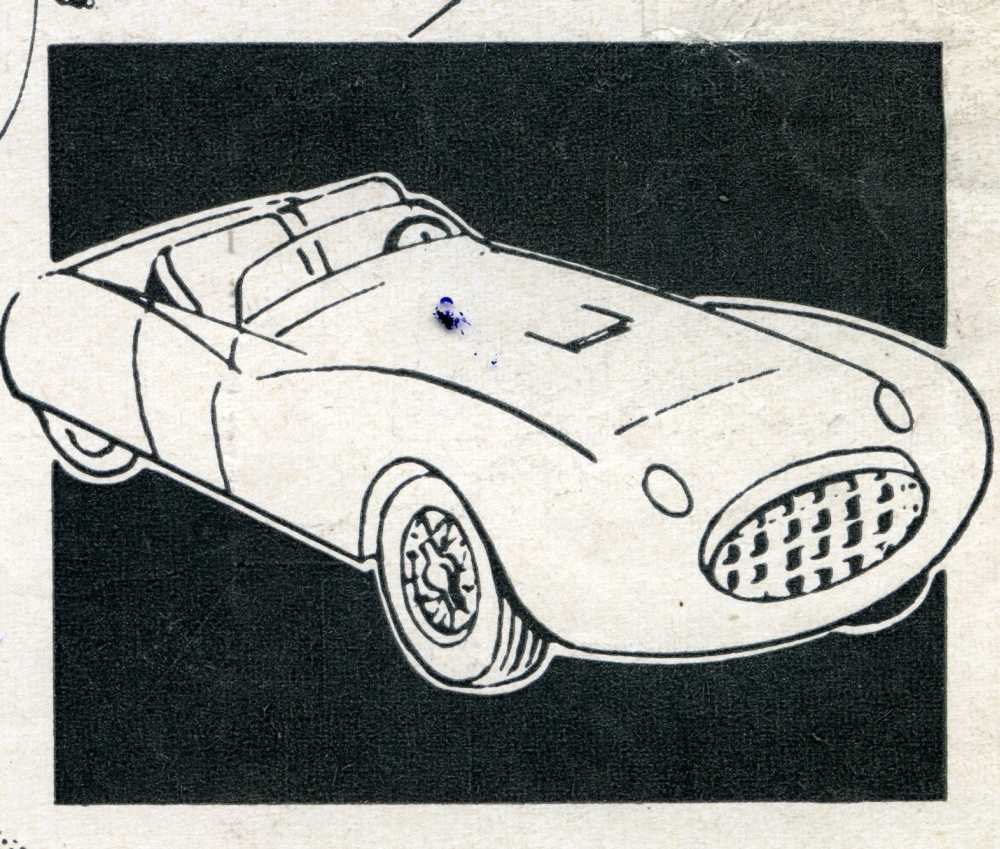 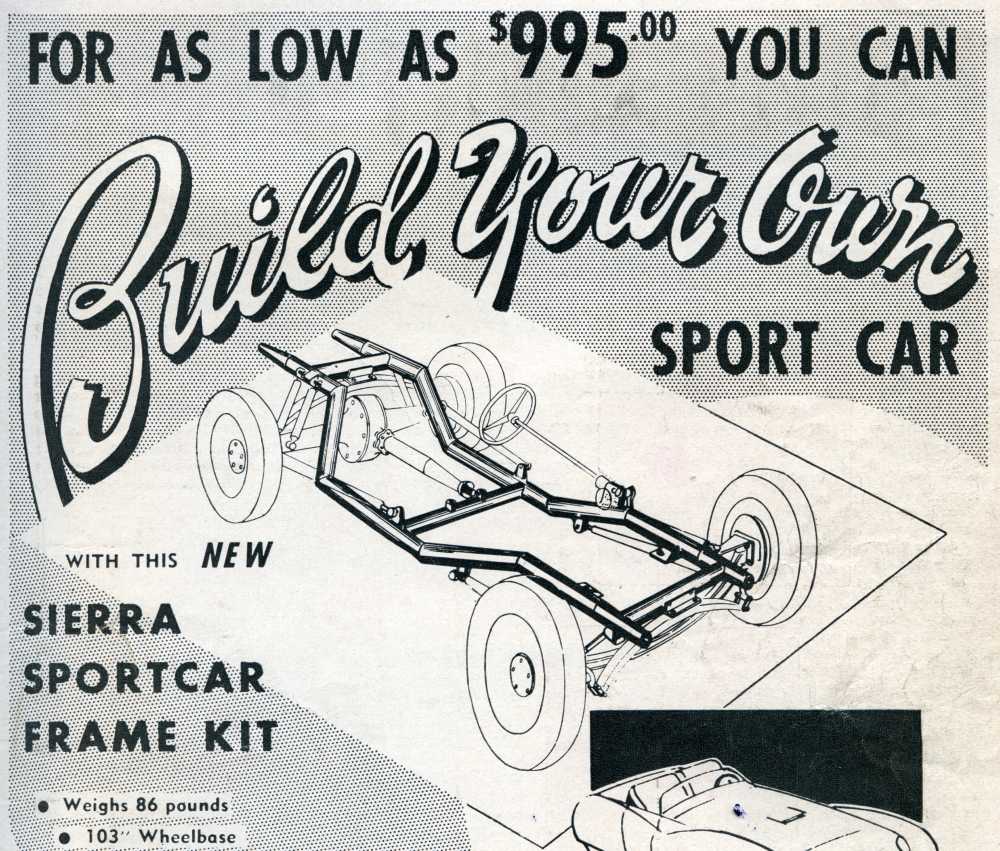 One of the remarkable elements of this frame is who Bill Jones had test it.  As discussed in his ad, both Indianapolis Speedway driver Jimmy Reece tested it along with none other than Caroll Shelby – and remember this was in 1953.  Very early.  Some of you may remember that Caroll Shelby had driven a Victress sports car as well around the same time (1953) as well.

So much history back then around these custom-built sports cars.  Let’s have a look at the 6 page booklet.  And there are close-ups of each photo after the pages of the booklet are shown below. 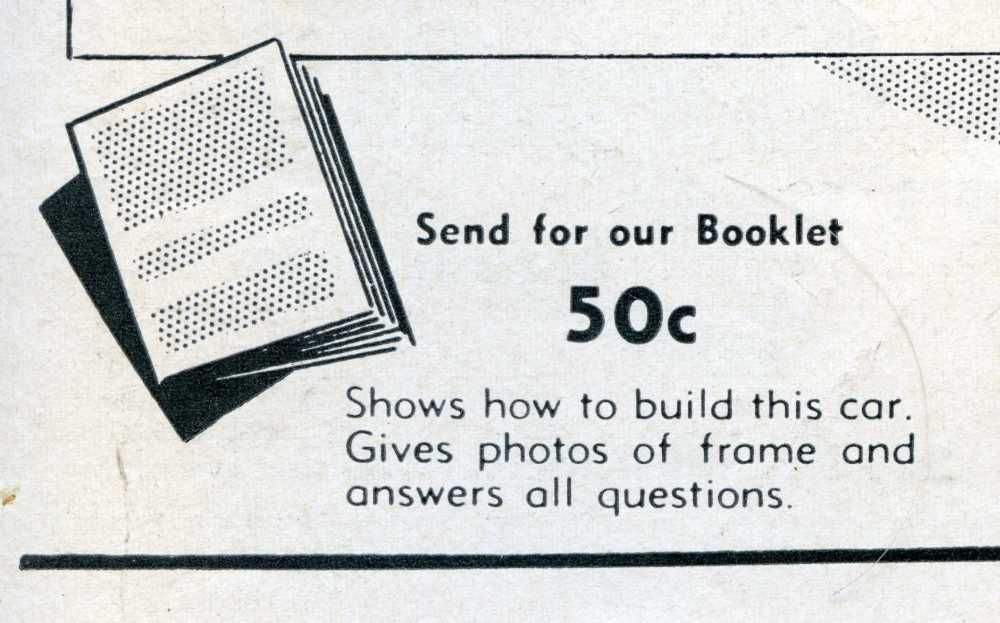 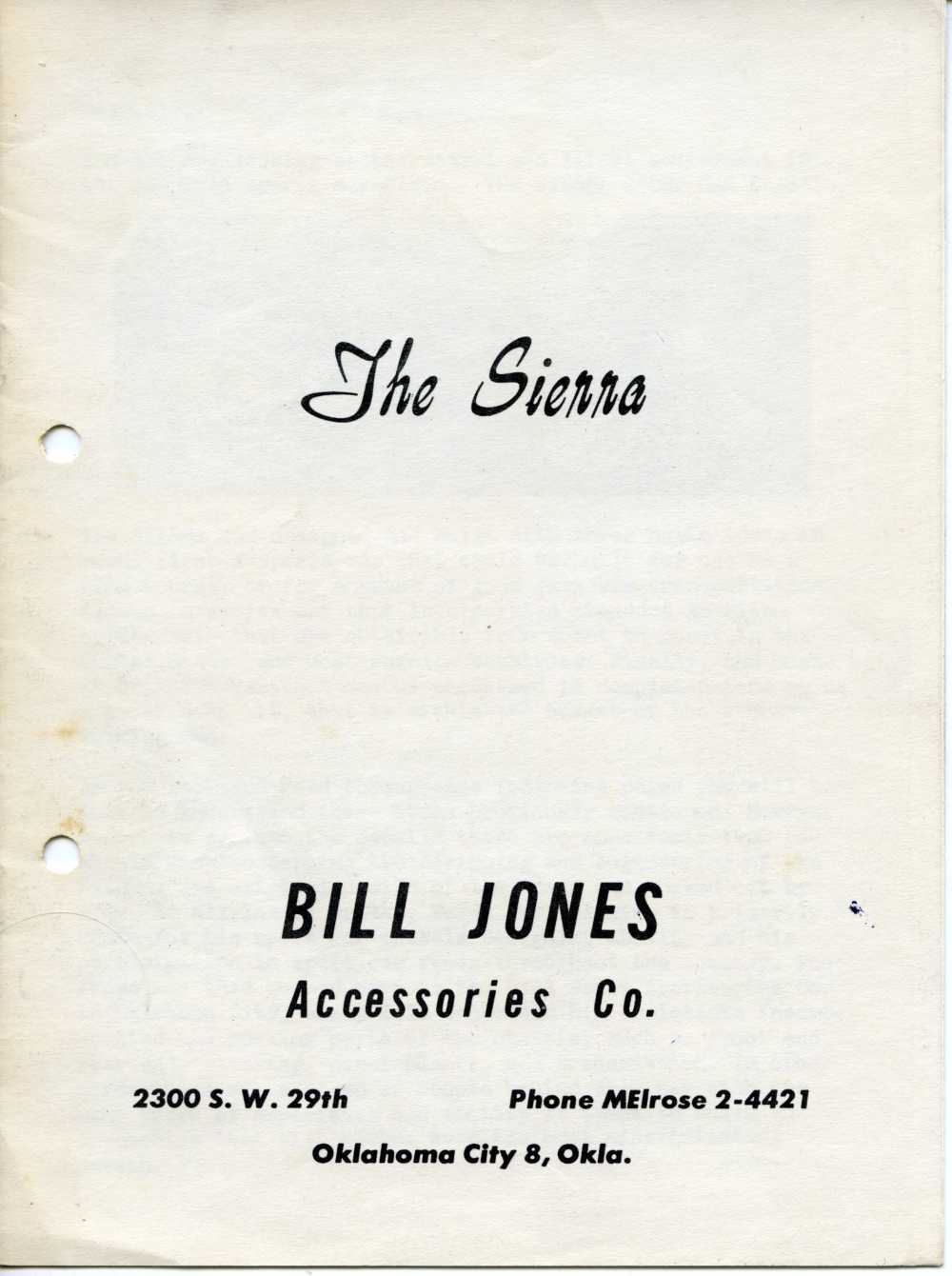 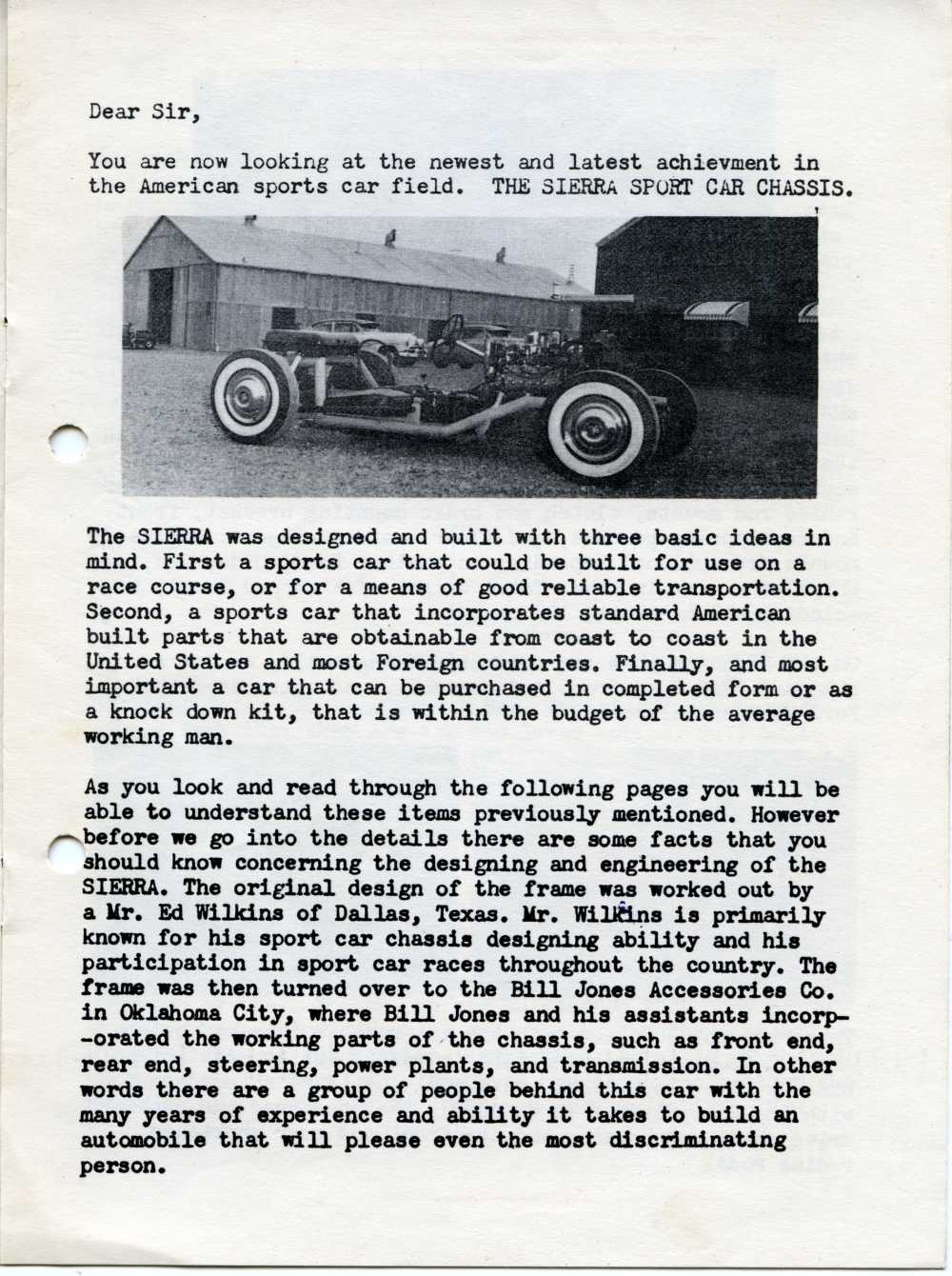 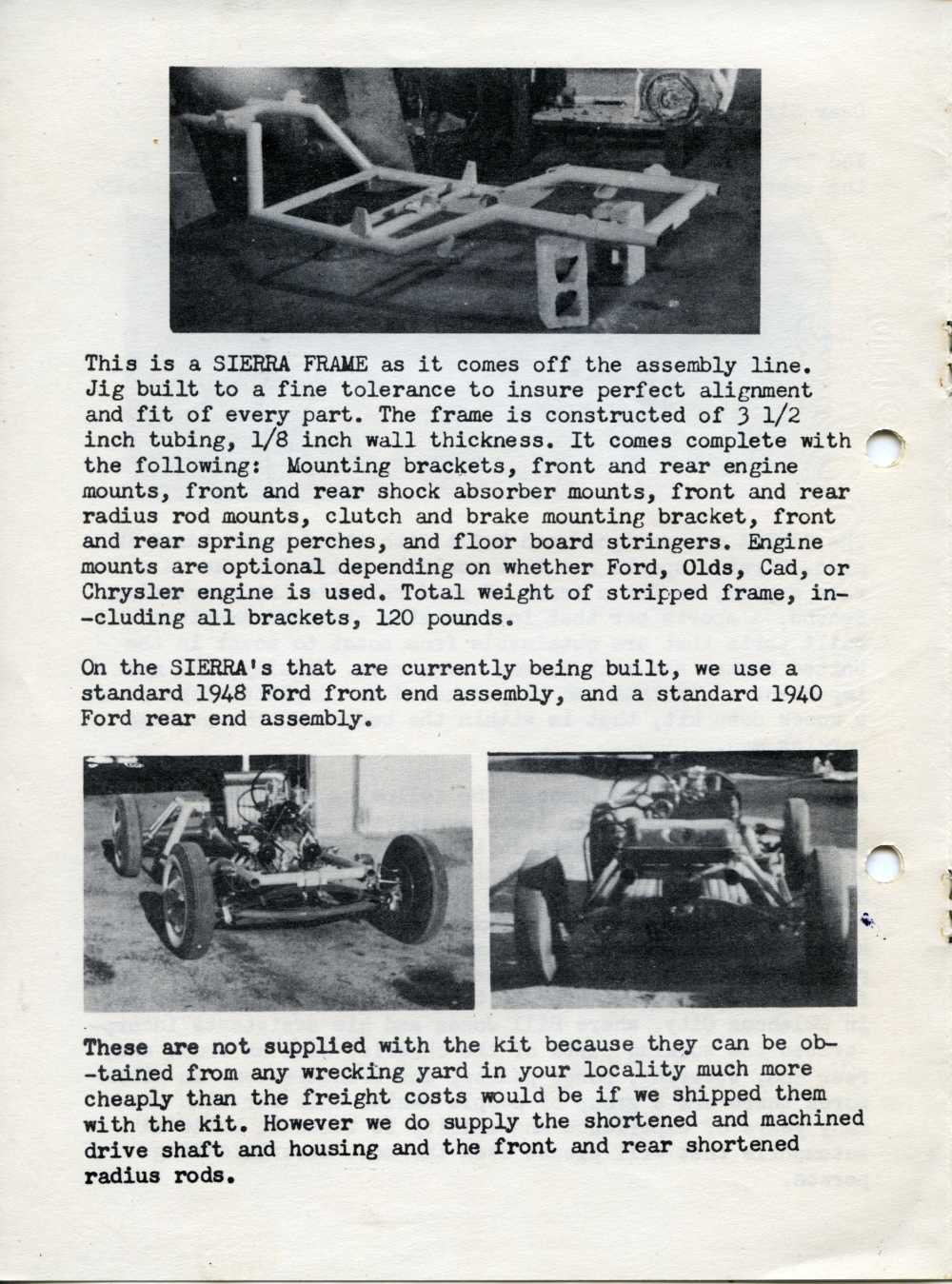 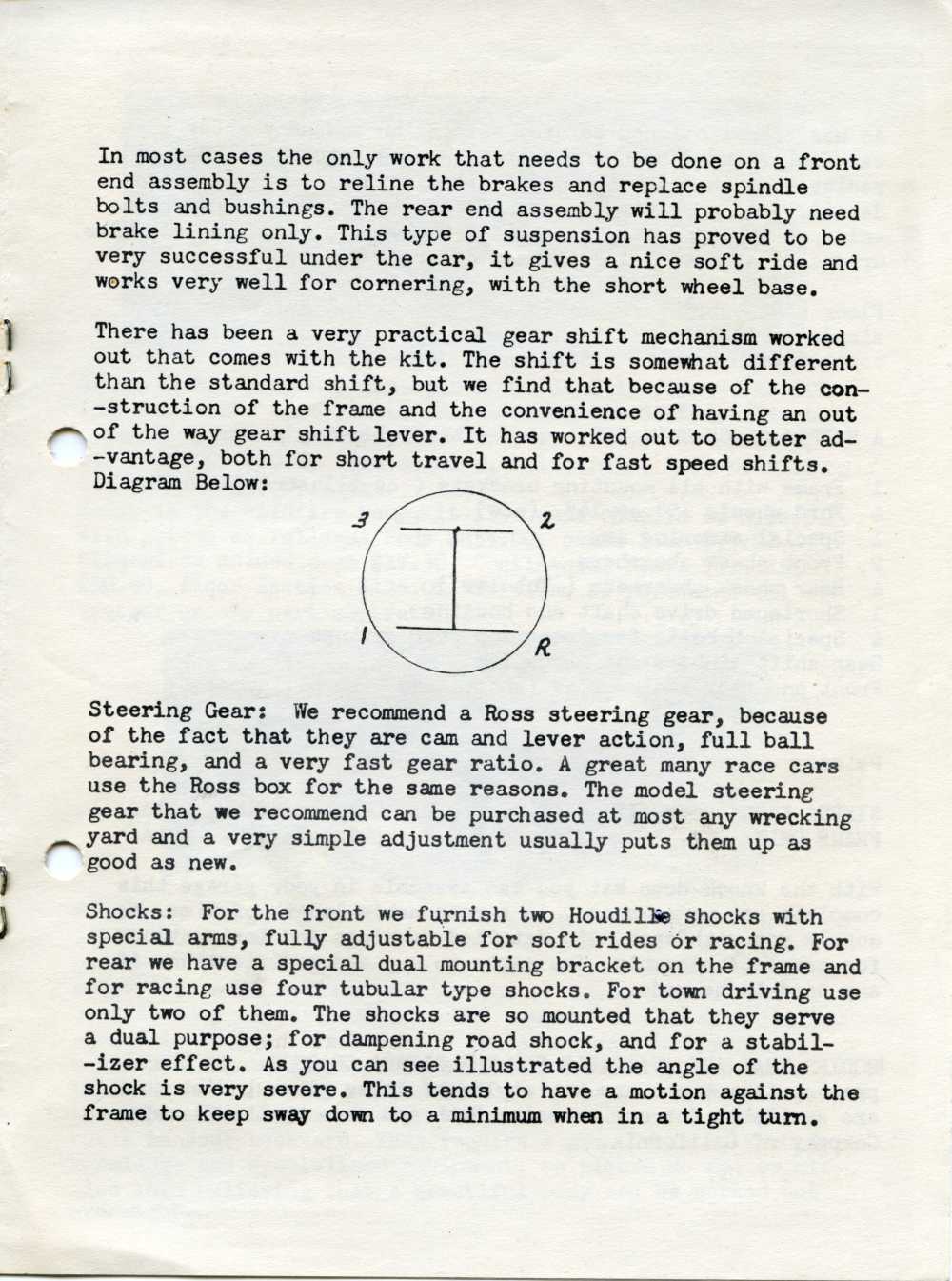 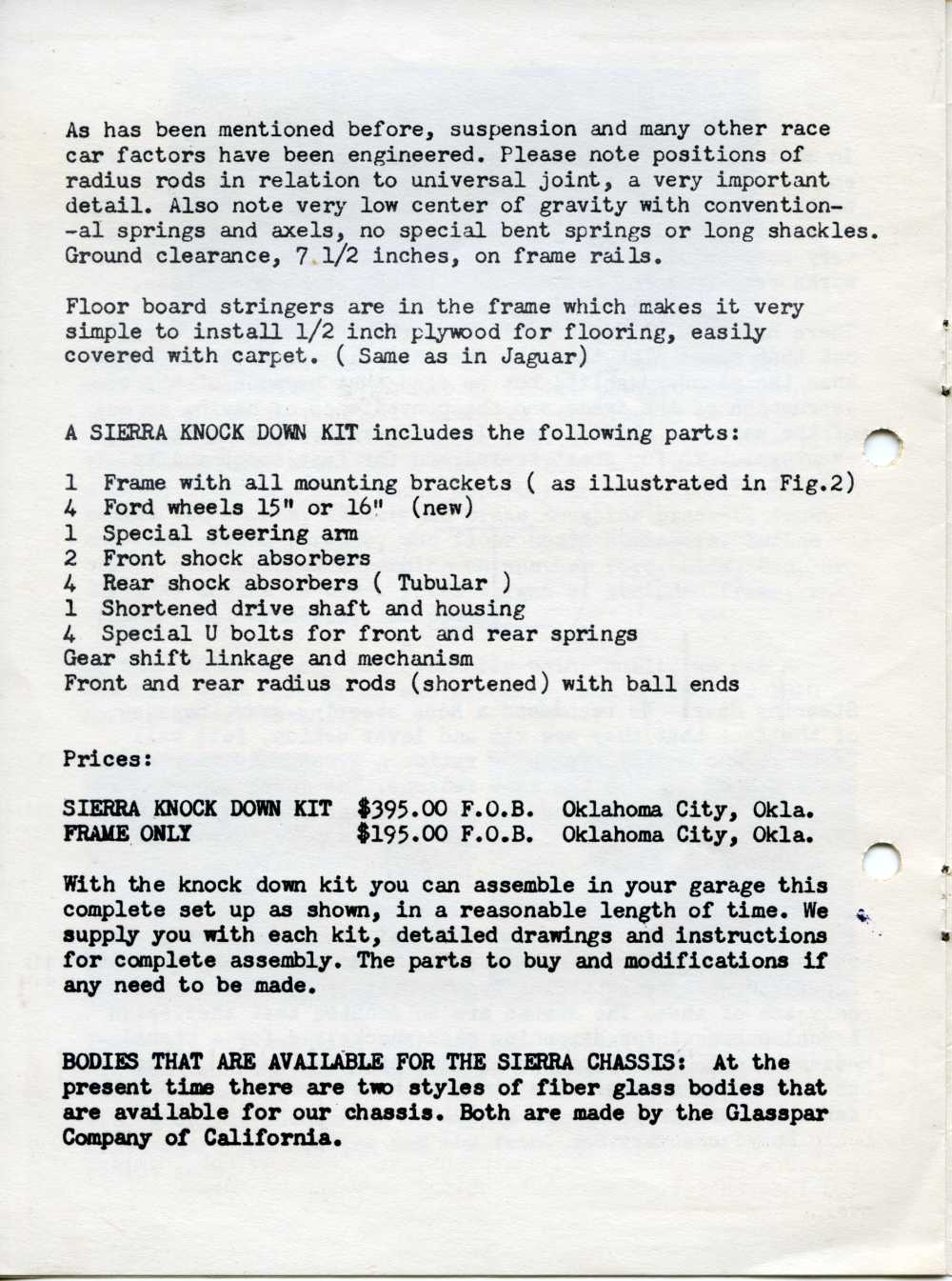 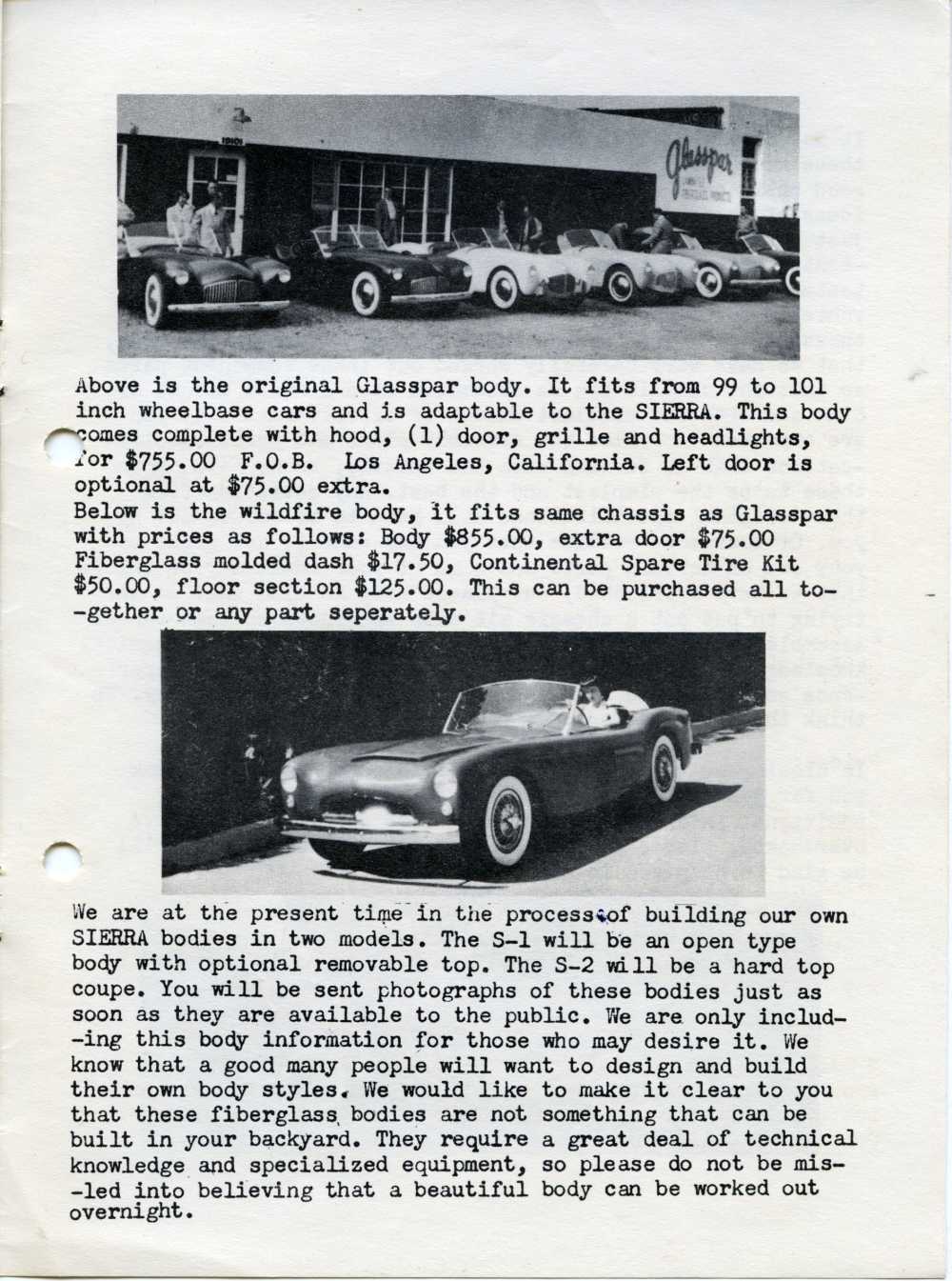 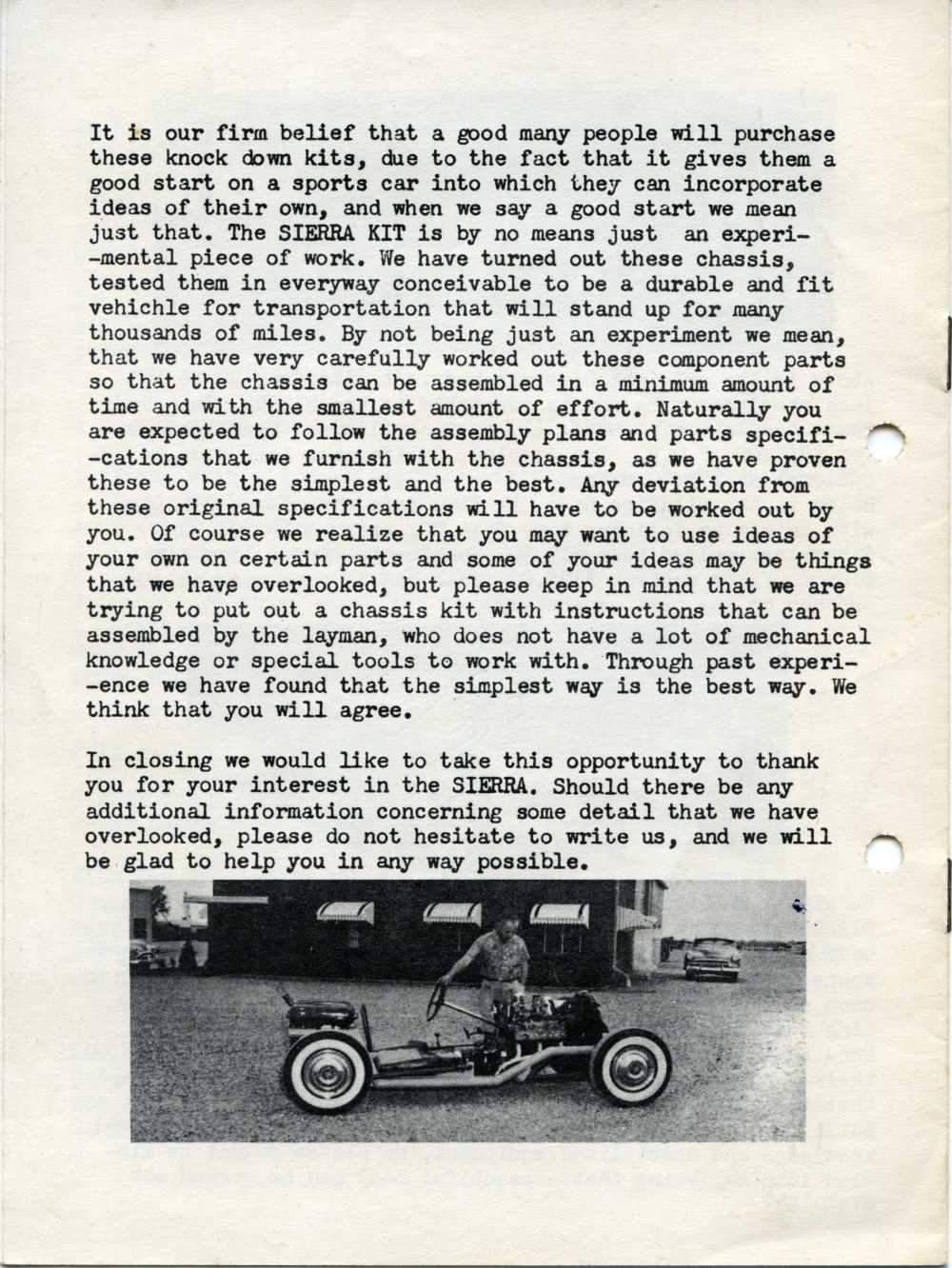 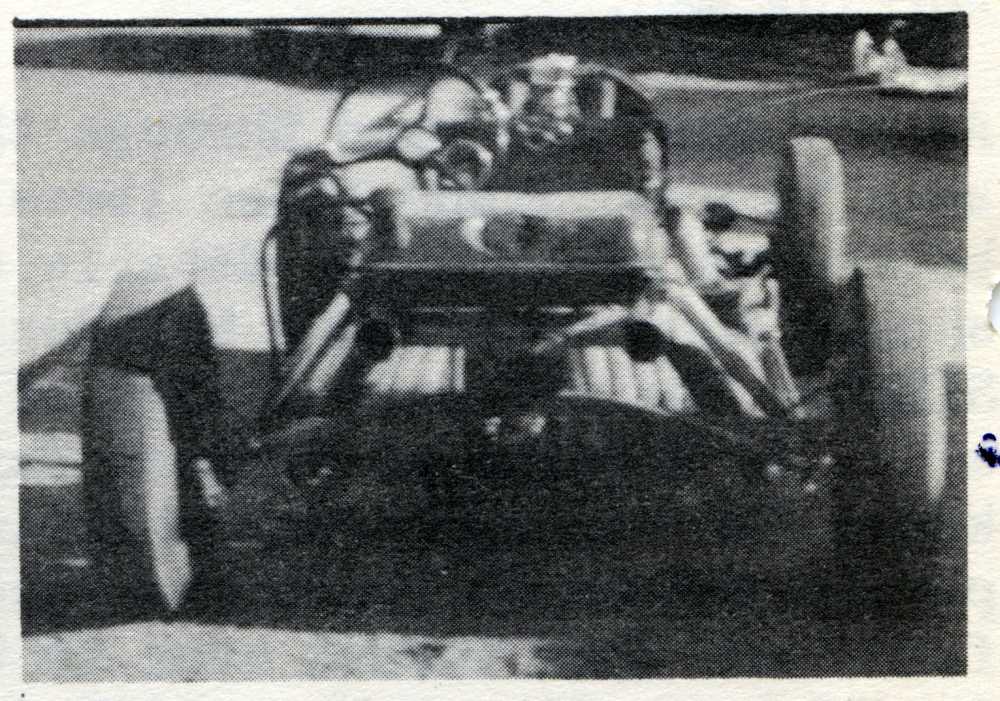 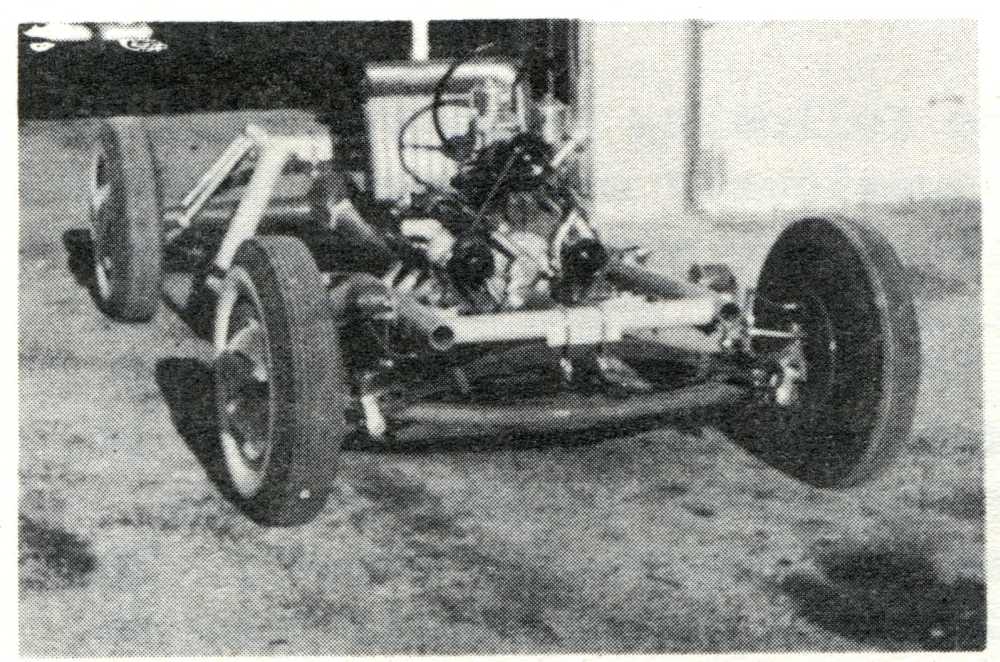 Bill was just 30 years old when he launched the Sierra Sportscar Frame as part of his larger “Bill Jones Accessories Company.”  In the next article we’ll explore more detail on this frame, some of Bill’s memories of how it came to be, and what his plans were post 1953.  We’ll also discuss what Bill did later in his life around cars – some surprises are sure to be had 🙂