Nik Gudmunds and Jerry Ball completed the Thor in 1958.  Little did they know that they were making history by using a VW chassis and drivetrain.

The VW Beetle first started to arrive in the USA in 1949, and by late 1955 Volkswagen sales were strong enough to establish a sales office in Englewood, New Jersey. While many people became enamored with the production version of the Beetle, others saw it as a great platform to build a more stylish and sporty car using the VW chassis and drivetrain.  This trend started strongly in Europe with individuals, small companies and coachbuilders (including Rometsch, Denzel, Beutler, Dannenhauer and Stauss, Hebmuller, Steyr, Kohlruss, Wendler to name a few) producing stylish examples.

This trend continued in the USA as well, where it was usually individuals who were using the air-cooled VW drivetrain and/or were re-bodying VW Beetles to their own sports car styling and taste.  Individuals, that is, like Nik Gudmunds and Jerry Ball.

We’ve been researching the first postwar VW specials that were designed and built in America using a body of original design dedicated to the VW platform.  At this time we’ve found five early examples as follows:

It was in this timeframe where Nik Gudmunds and Jerry Ball designed and built the “Thor” in 1957 and finished it in 1958 making it an early and unique example of an American designed VW-based sports car.

In the photos below you first see the Thor in red.  This was the pigment mixed into the resin (also shown in the receipt in part 2 of this story) and shows the Thor without paint – fresh out of the molds and bodied on the VW chassis.  And if you look carefully, you can see the name “Thor” on the front grill area as Nik Gudmunds described in part 2 of this story.  The finished Thor debuted with dark blue paint – and what a pretty car it was.  The white walls were a great touch for the era.

Besides the VW chassis and drivetrain, another unique feature of the Thor was the Targa-style removable roof – a very early usage of this top design.  Good friend and fellow Thor owner Matt Burke further explained in a recent conversation that Nik more exactly referred to this as a “Surrey” top.  It was divided into halves with no center bar.  The purpose of this as Nik had shared was to allow a passenger shade and protection from wind / sun while the other half of the top could be removed for the driver (or vice versa).

Let’s have a look at some color photos featuring the finished (or nearly finished) Thor from the late 1950s. 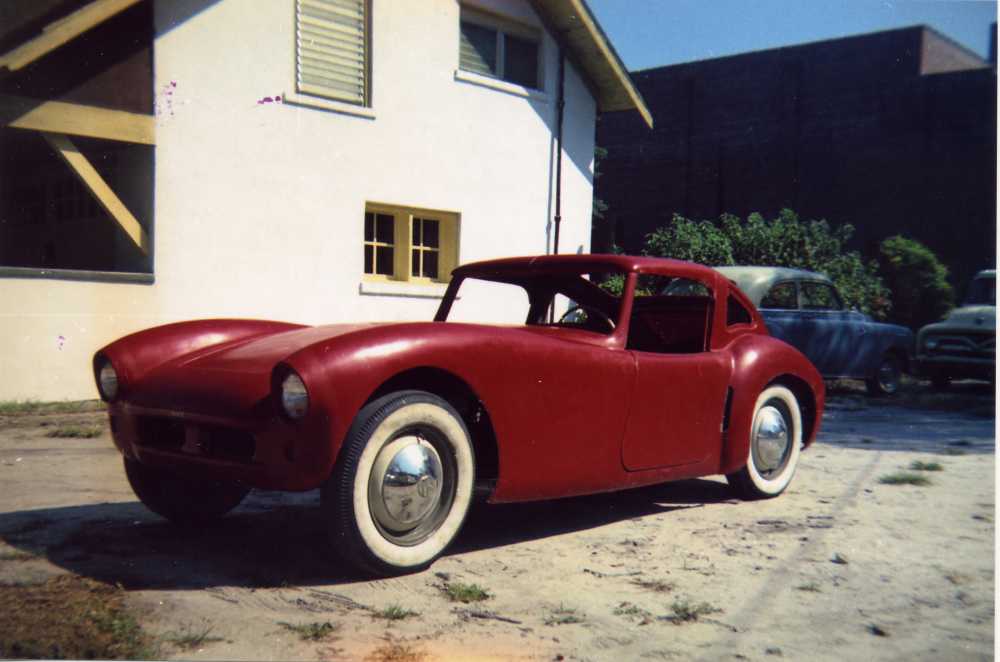 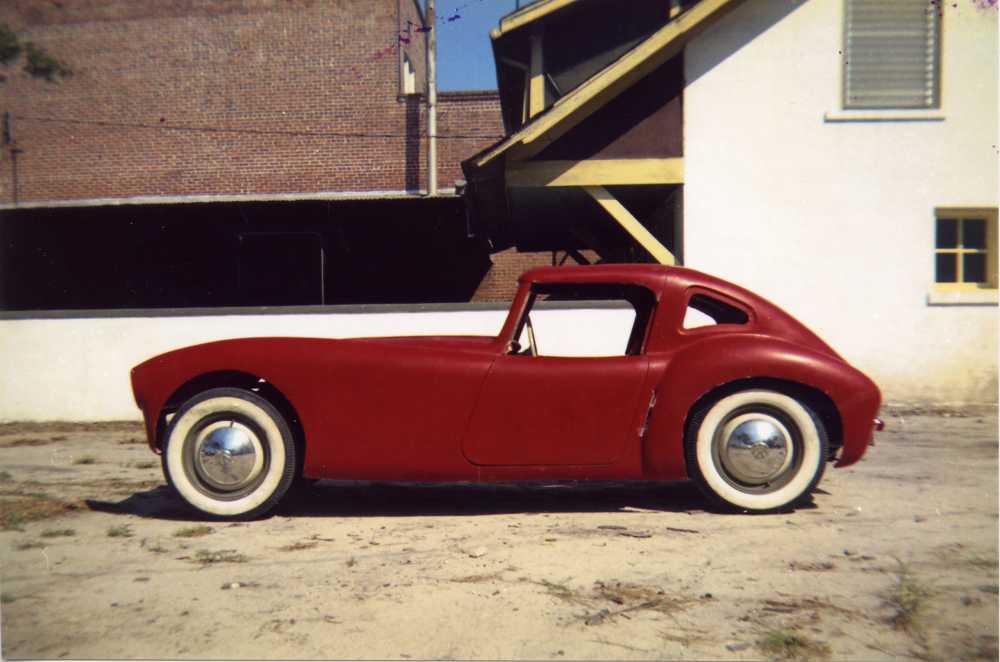 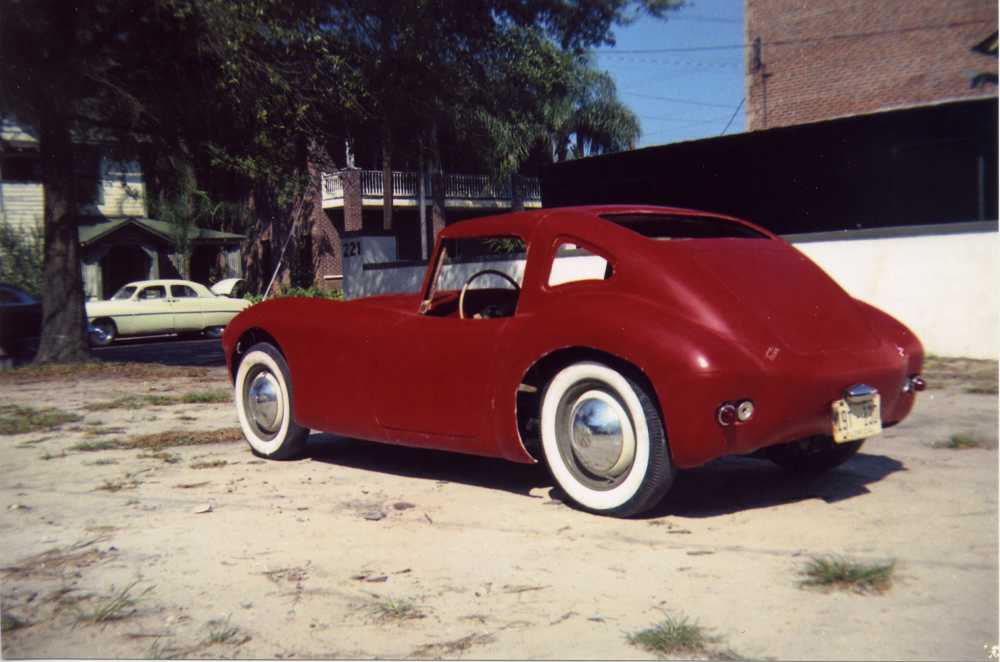 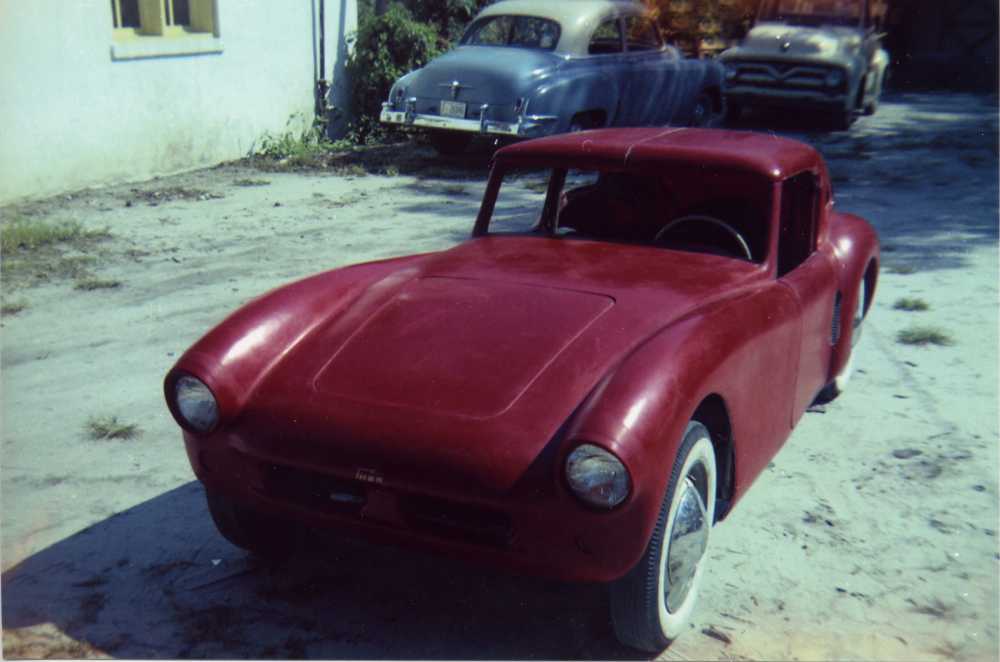 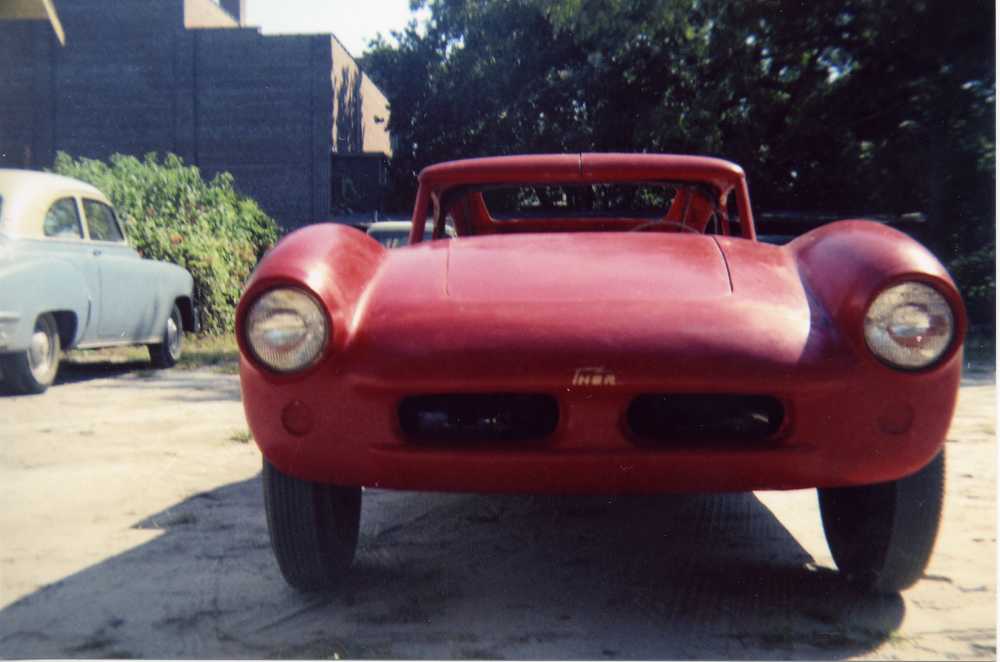 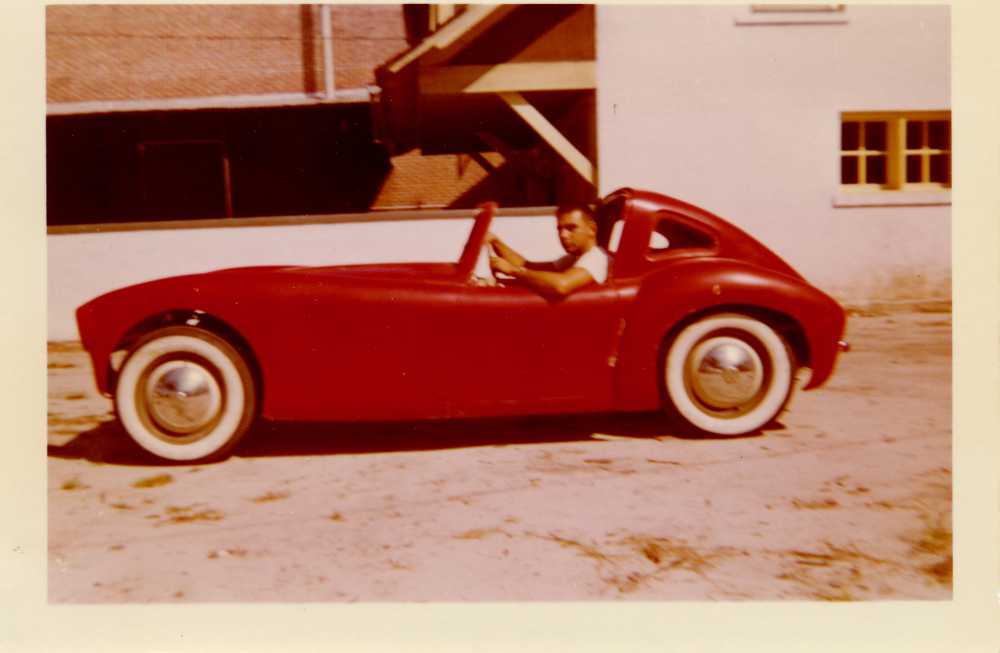 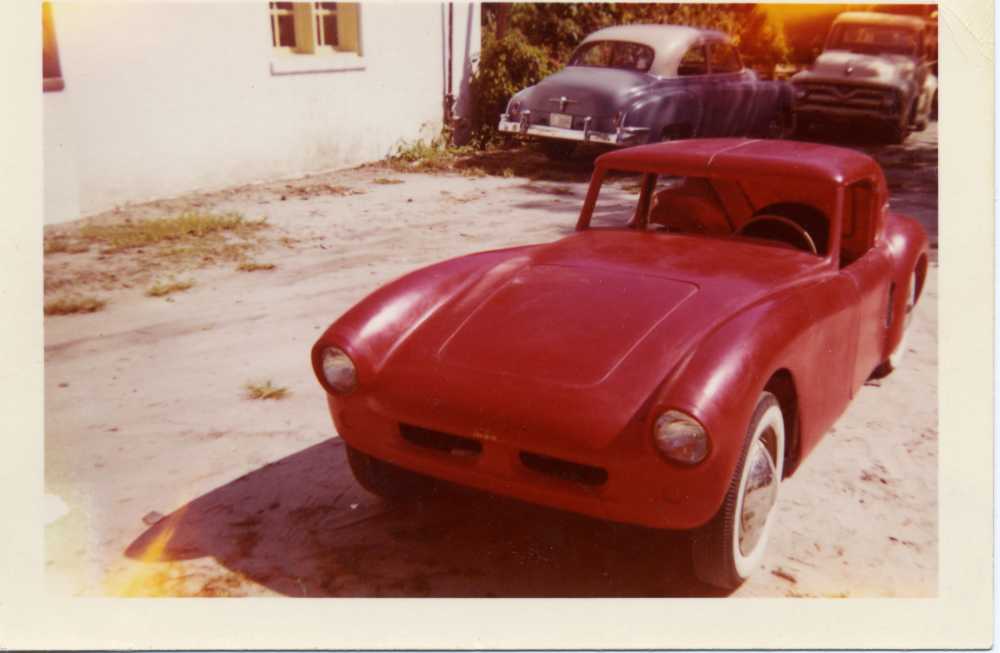 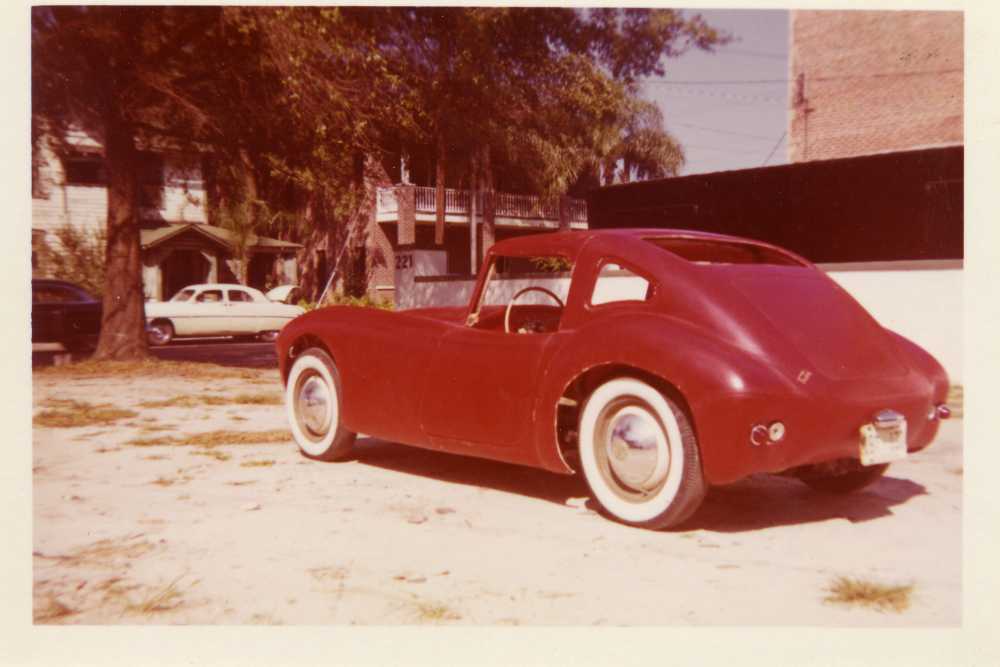 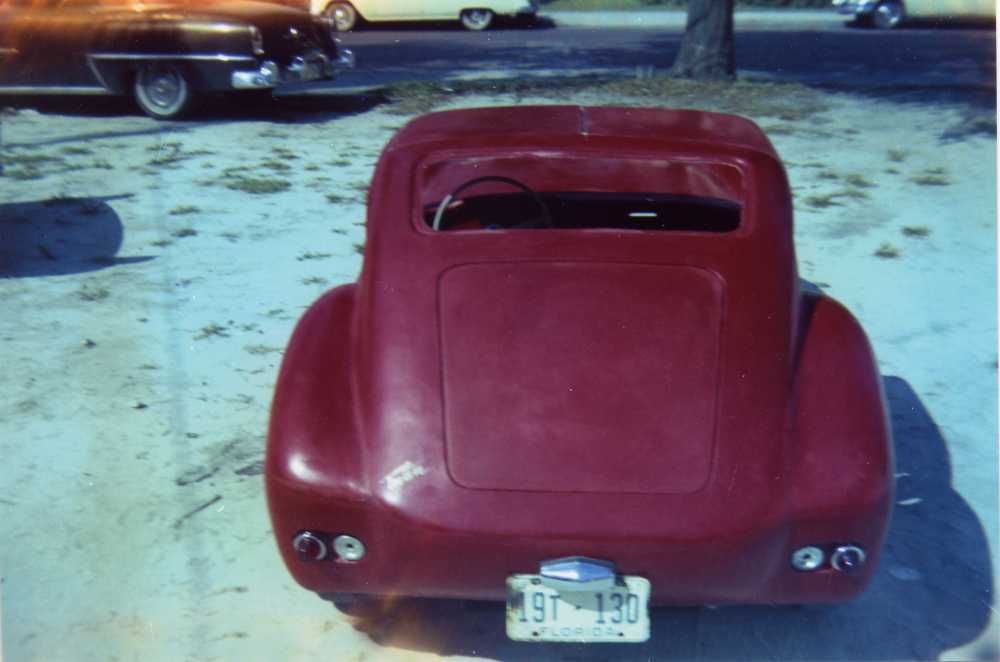 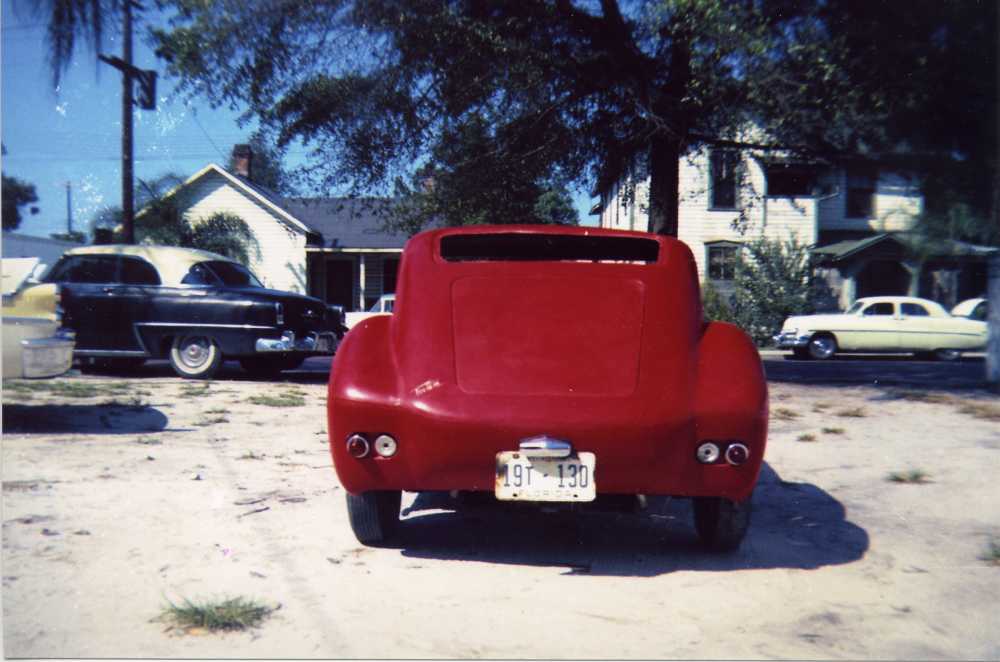 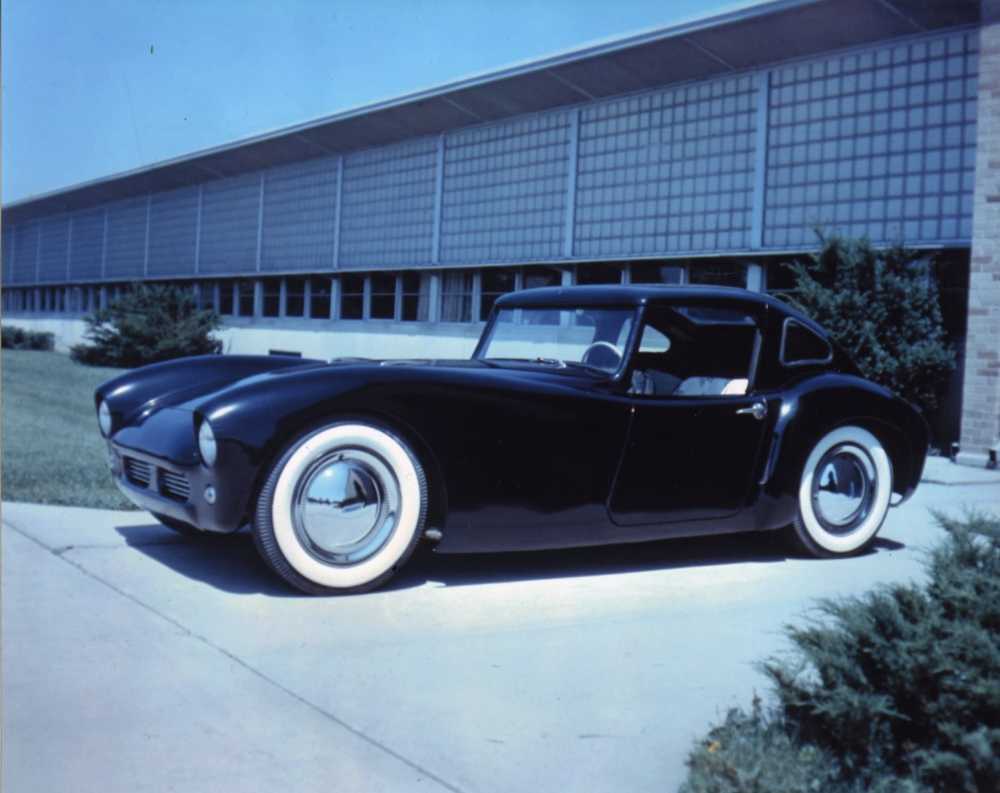 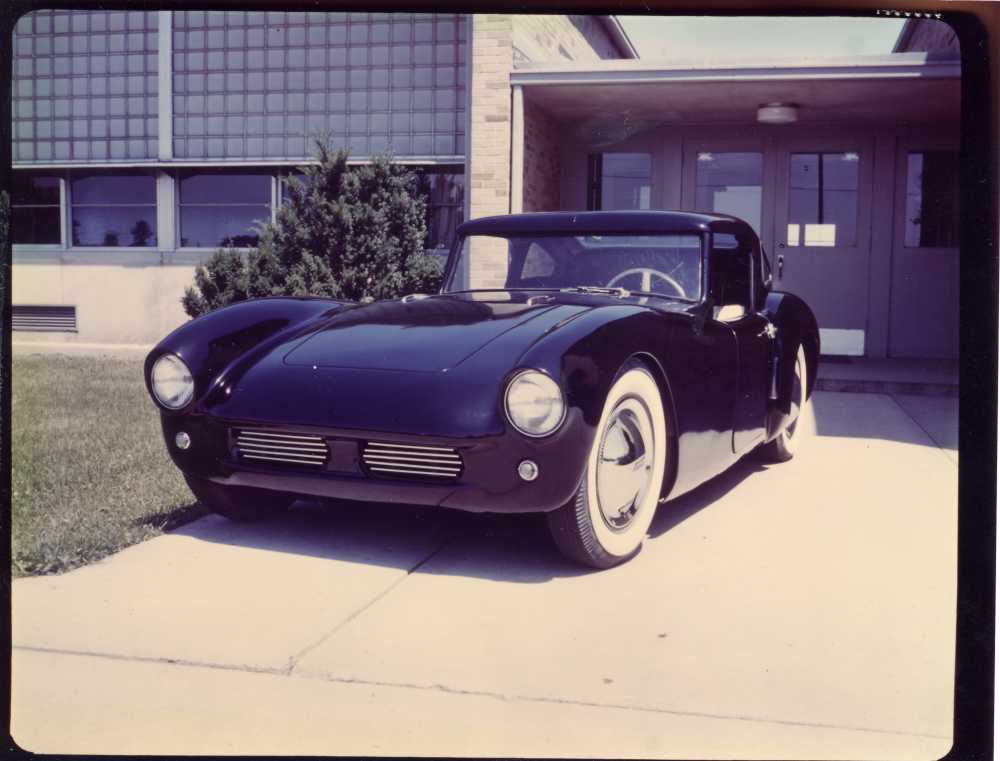 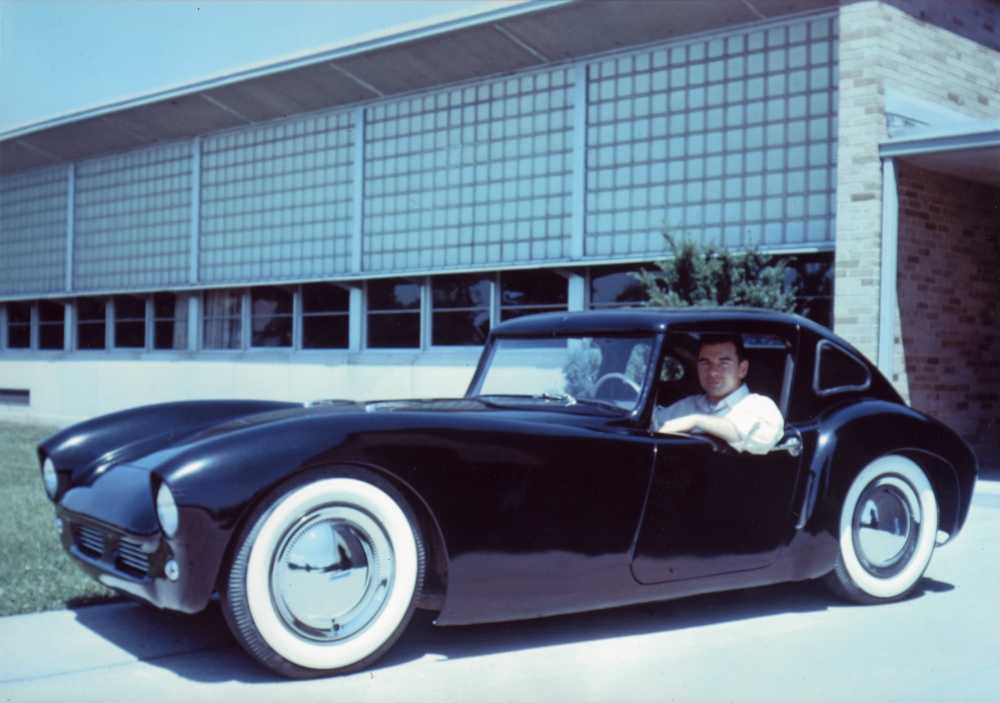 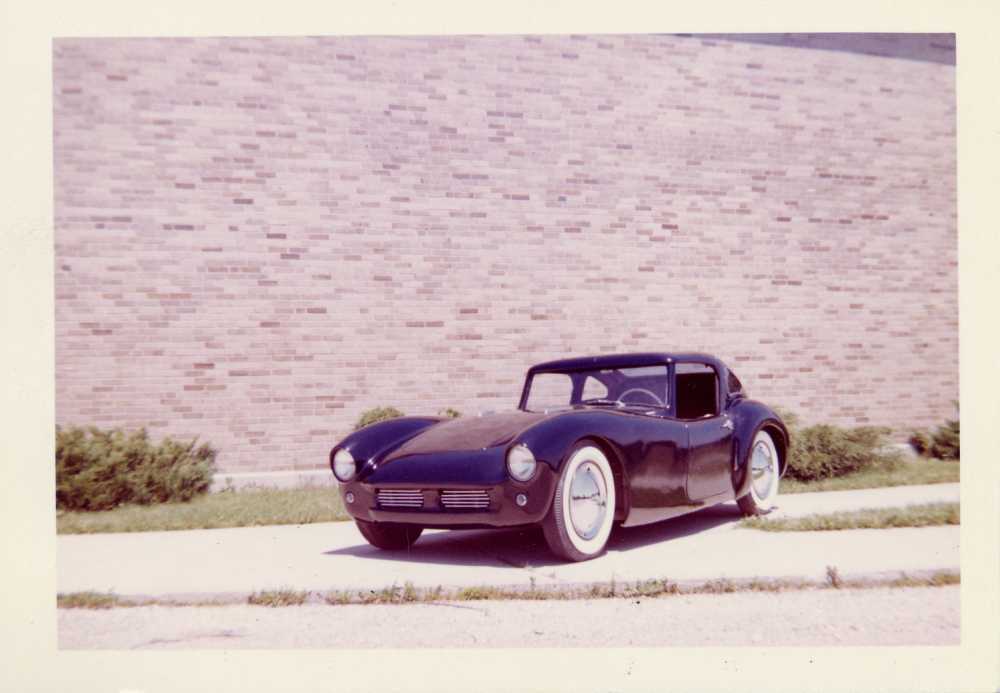 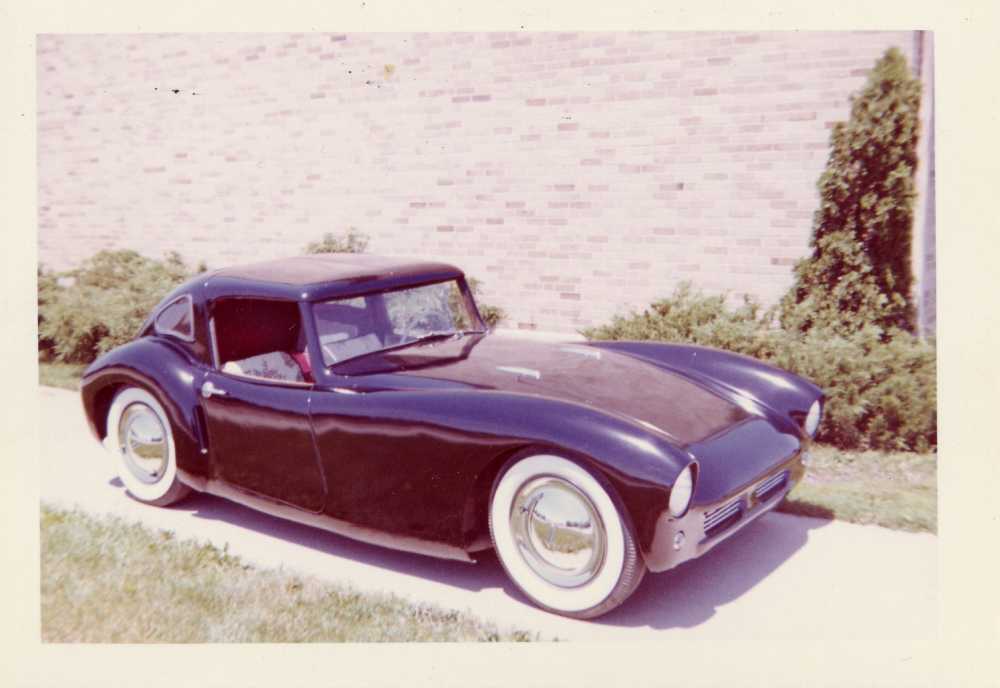 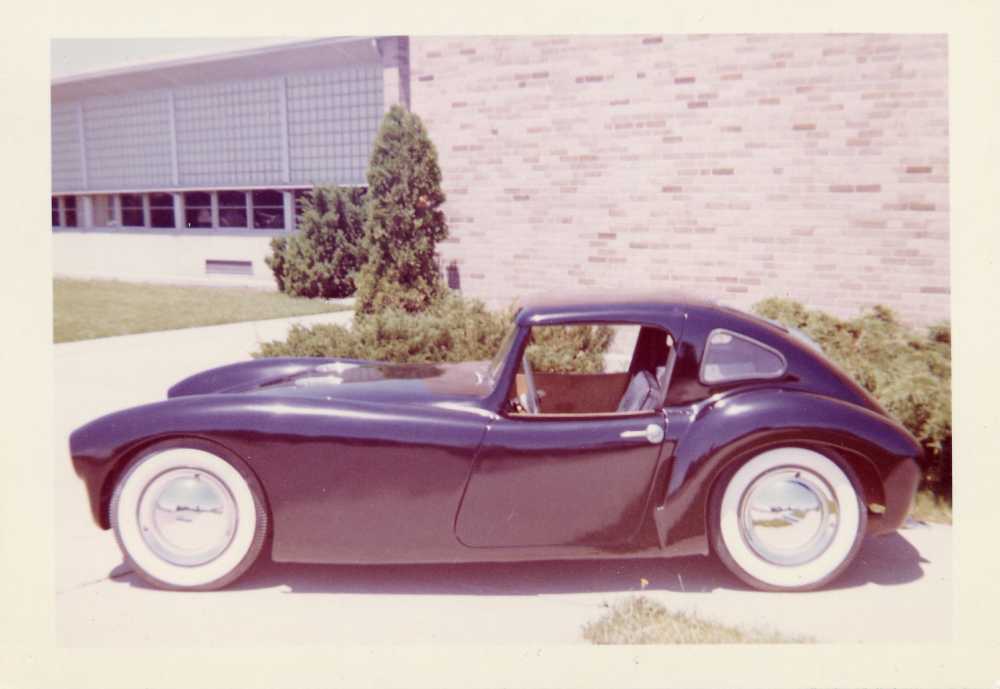 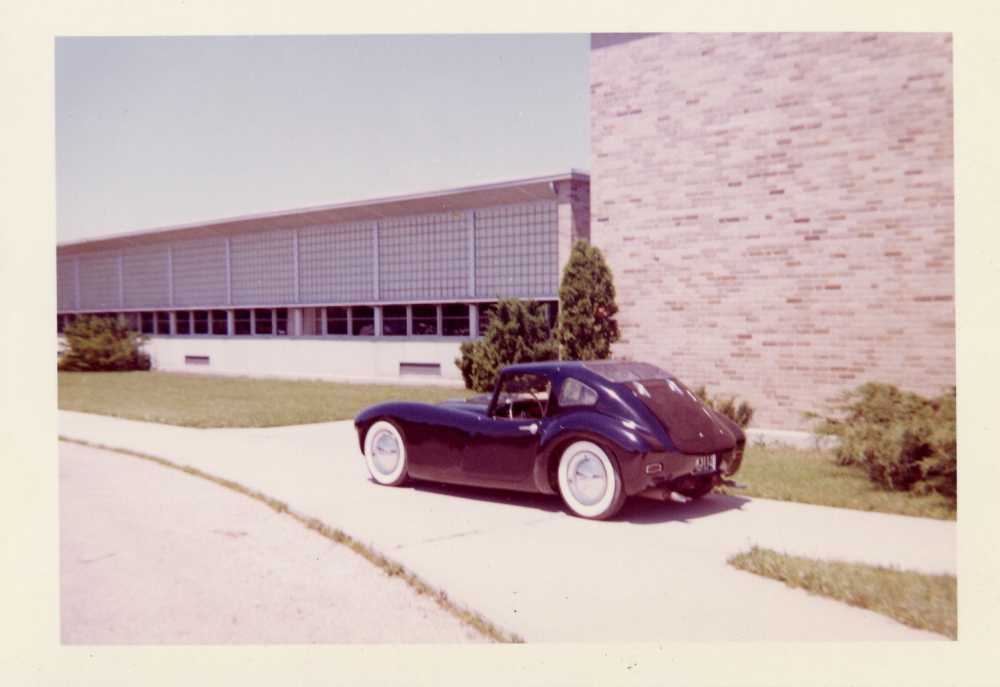 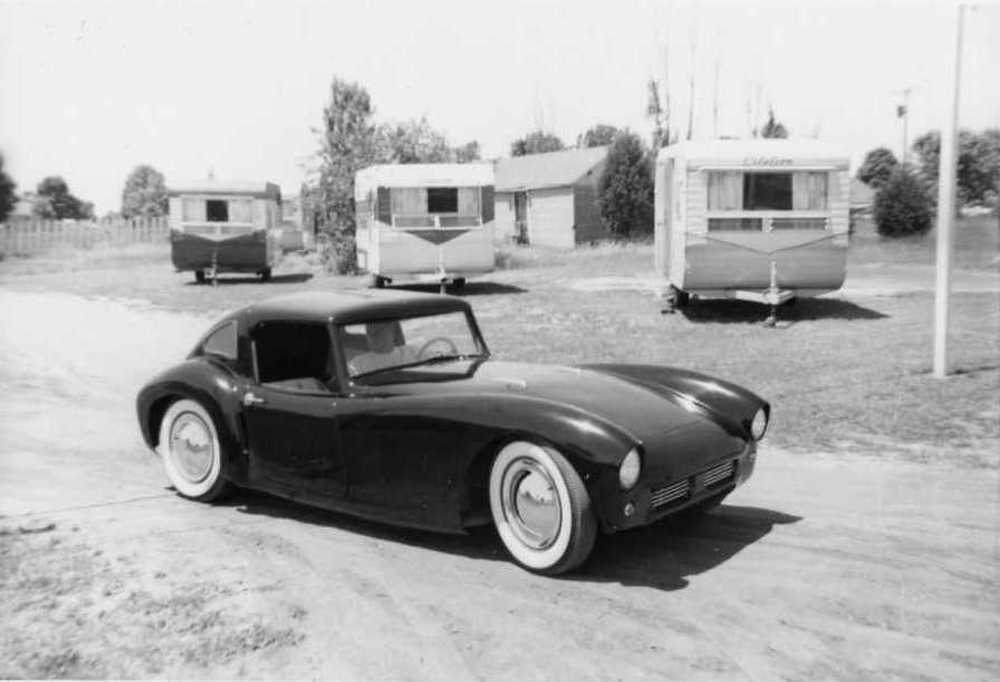 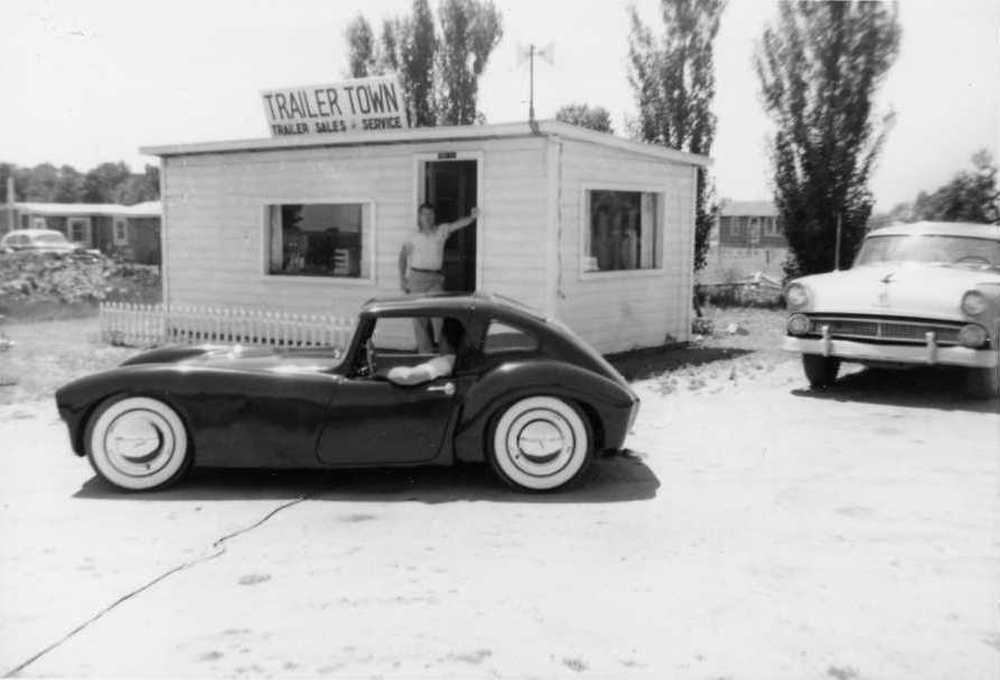 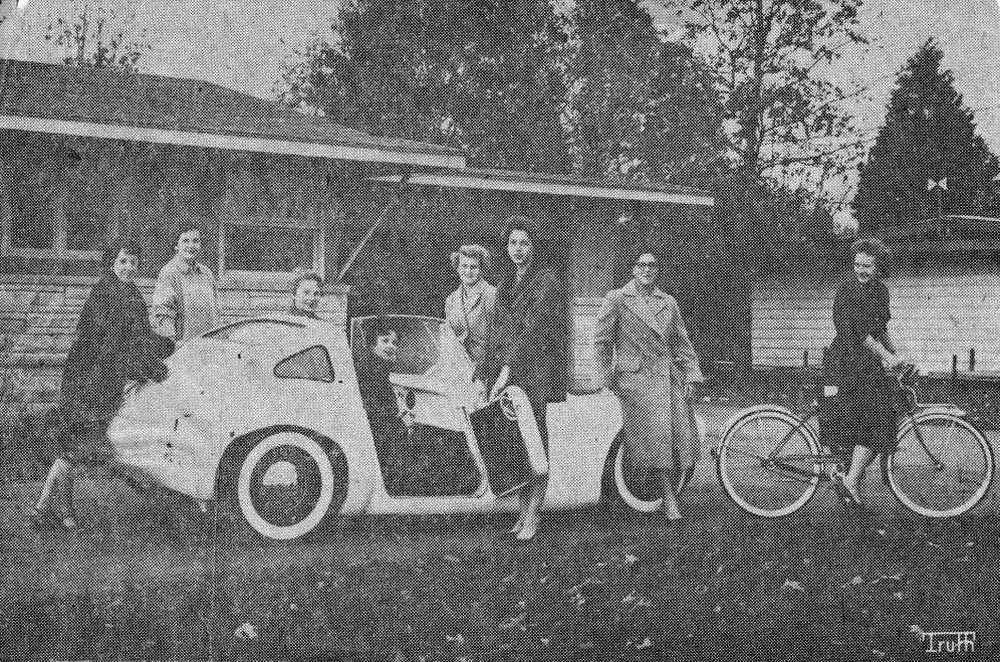 Being able to share the story and photos of Nik Gudmunds’ and Jerry Ball’s completed Thor sports car is an honor for all of us who celebrate Forgotten Fiberglass.  So it was with a heavy heart that I learned from his son Karl Gudmunds last Fall (2016) that Nik had passed away.

We can all celebrate Nik’s and Jerry’s life via their sports car “piece de resistance” the “Thor.”   A car that honors the postwar sports car generation, a car that gives tribute to the individual designers and builders of the era – a car that proudly bears Nik’s father’s name as its “marque” and an American automobile adventure that honors Nik Gudmunds, Jerry Ball and their combined accomplishment – the “Thor.”