It all boils down to the name….

Tracking down people who built cars decades before has its challenges – but it always starts with a “name.”  And when the name is “Vilmar Gudmunds” – one of the names on the design patent shown in the Hemmings article described in part 1 of this story – it helps.  It helps a great deal.  And it took a bit of research but I finally found Vilmar “Nik” Gudmunds living in Washington state. 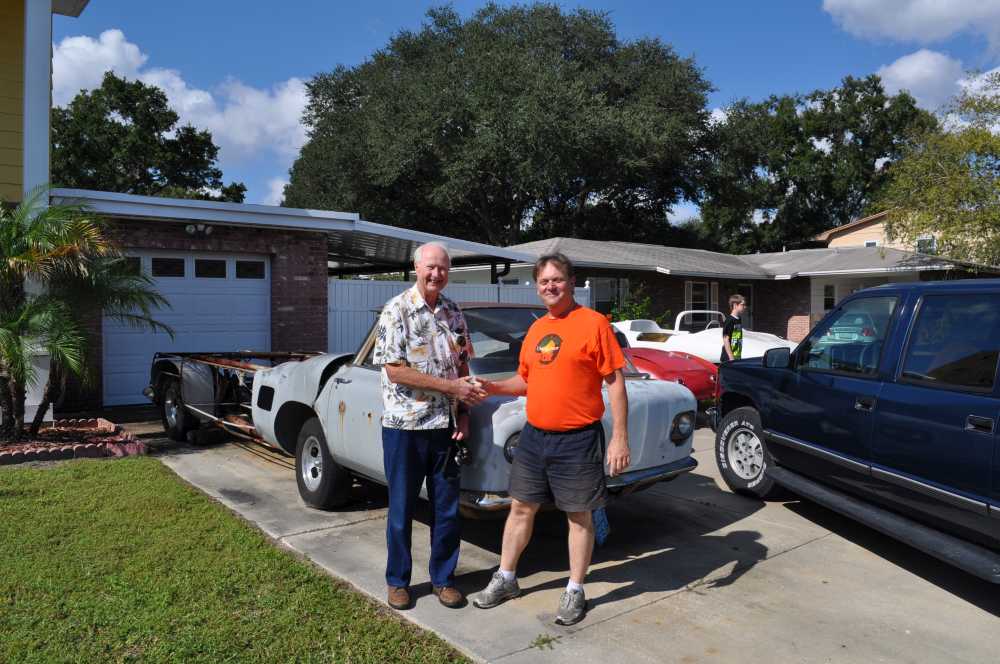 In a series of phone calls, Nik described how he and his friend Jerry Ball designed and built the Thor sports car – and through the years Nik had kept all documents and photos related to the design and building of the Thor.  Nik also offered to pen the story of his adventure with his friend Jerry Ball – the co-designers and co-builder of the Thor.  Stories told by the builders about their cars is a rare thing indeed.  So it is with great pride and honor that I share the story about the heritage of the Thor from Nik Gudmunds himself.  Thank you Nik 🙂

How This Project Came About:

At the time (1957) we were both enlisted men in the Air Force, stationed at Orlando AFB as members of the 866th Tactical Missile Squadron. We were electronic technicians in the communications section.  Another member of our section had recently purchased a VW, with the fabric sun roof, and was involved in an accident which resulted in the car being “totaled”.

Jerry’s family was in the RV trailer manufacturing business, and I had previous experience in fiberglass car body construction, and we got to talking about building a car body to fit on the VW chassis of our friend’s “totaled” car. I believe there were already fiberglass car body kits being advertised and we thought that it would be a good business to get into after our enlistments were up. Another fellow in our group liked to sketch car designs, so we asked him to sketch a fastback coupe for us. I then carved a model out of a block of balsa wood to give us an idea of what it would look like in 3 D. 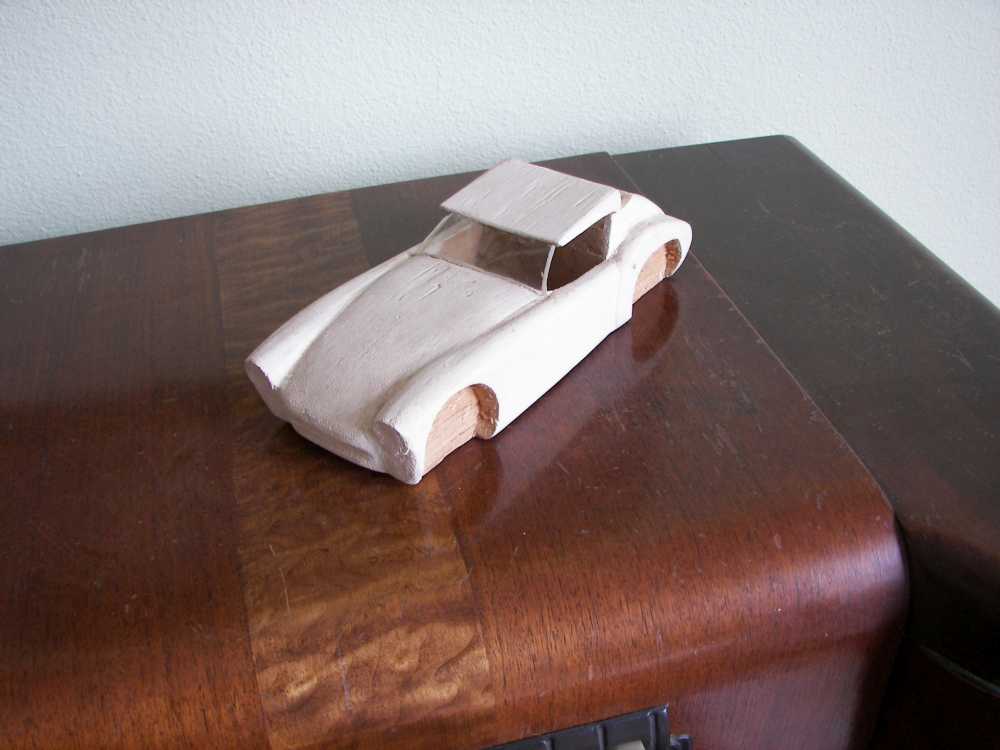 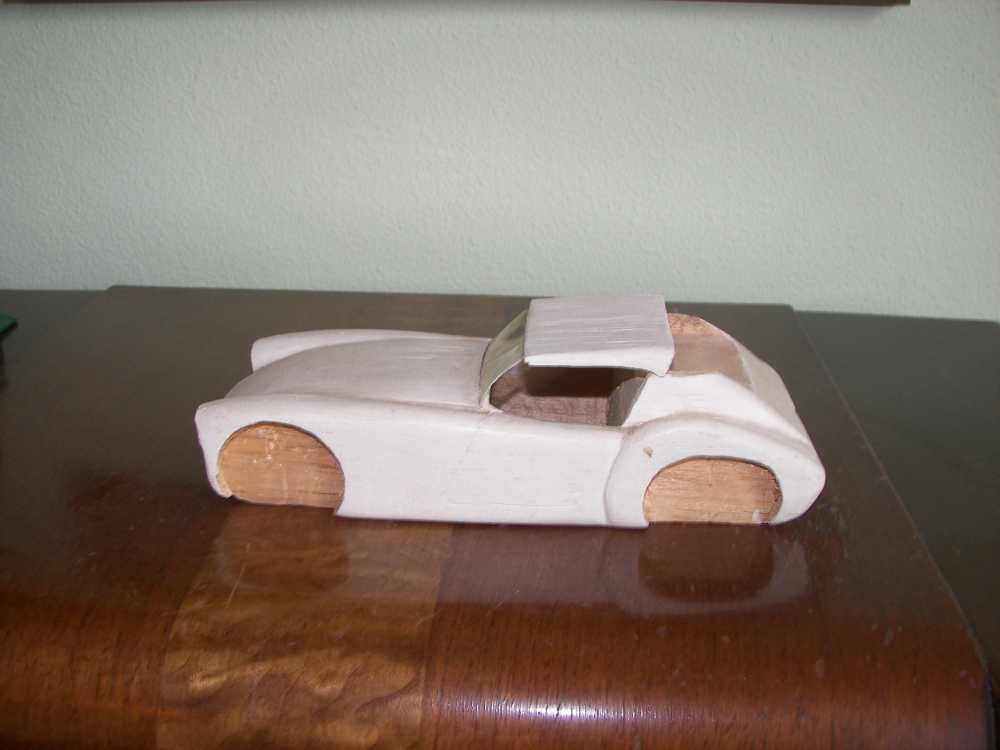 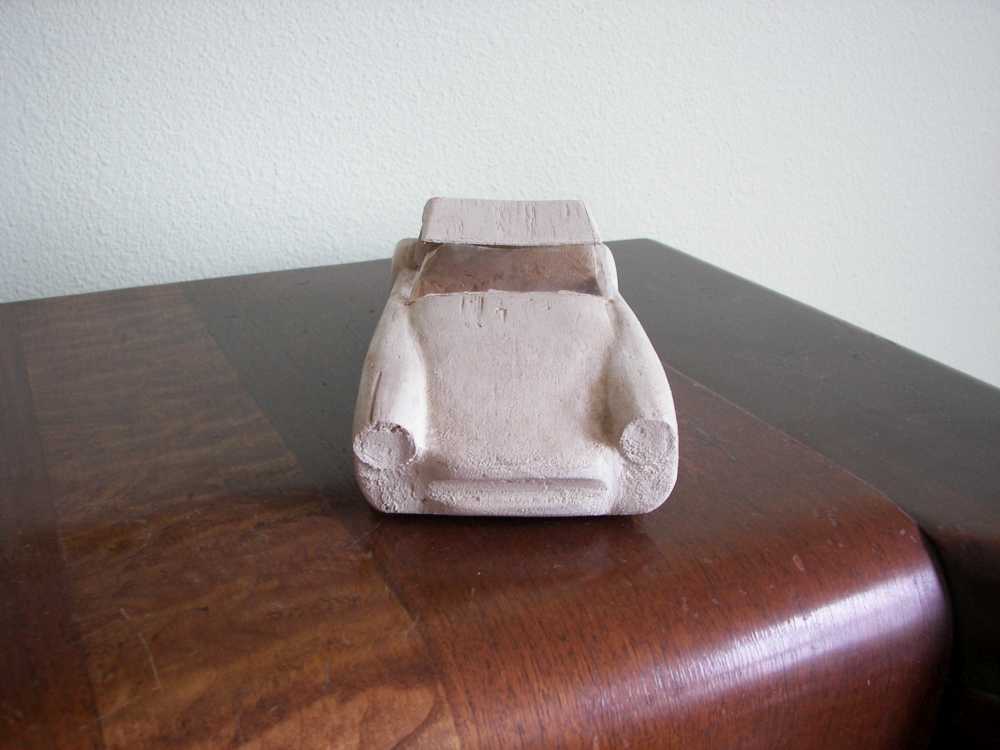 We then arranged with the VW owner that we would build a fiberglass body for his VW and he would pay the costs of the mold as well as the body and we would keep the mold. It later turned out that we bought the VW chassis and running gear from him and built the car body for ourselves.

The Process of Building the Mold:

My wife and I had married earlier that year (March 2, 1957) and were living off base in a small apartment on Colonial Drive in Orlando. That became the headquarters for our project. 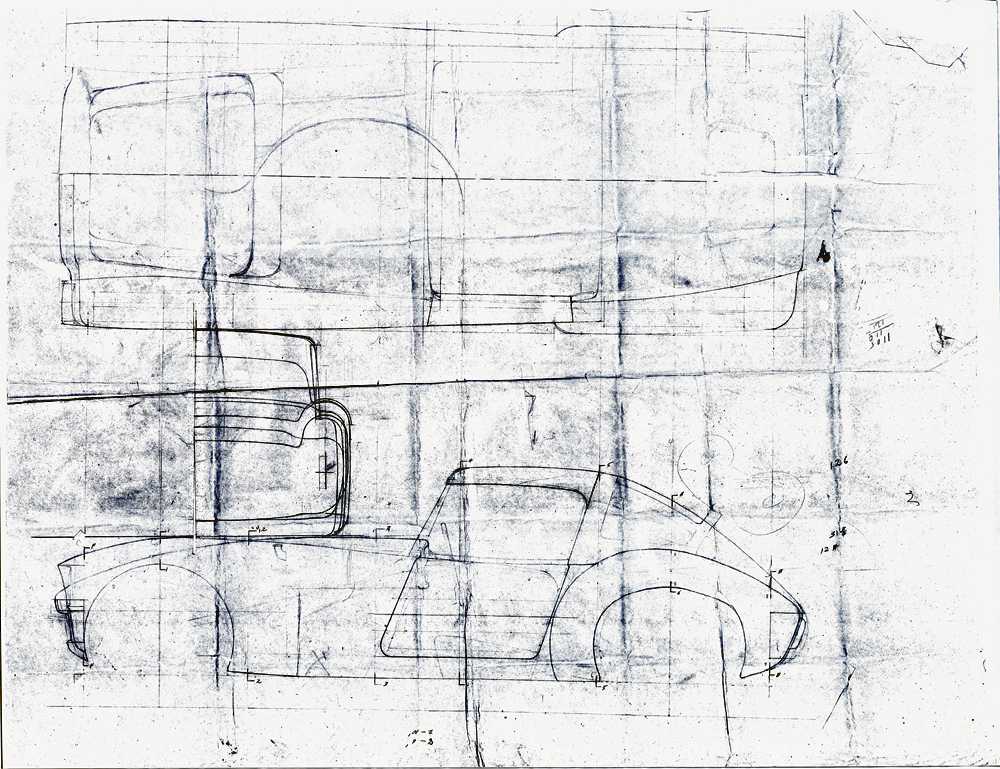 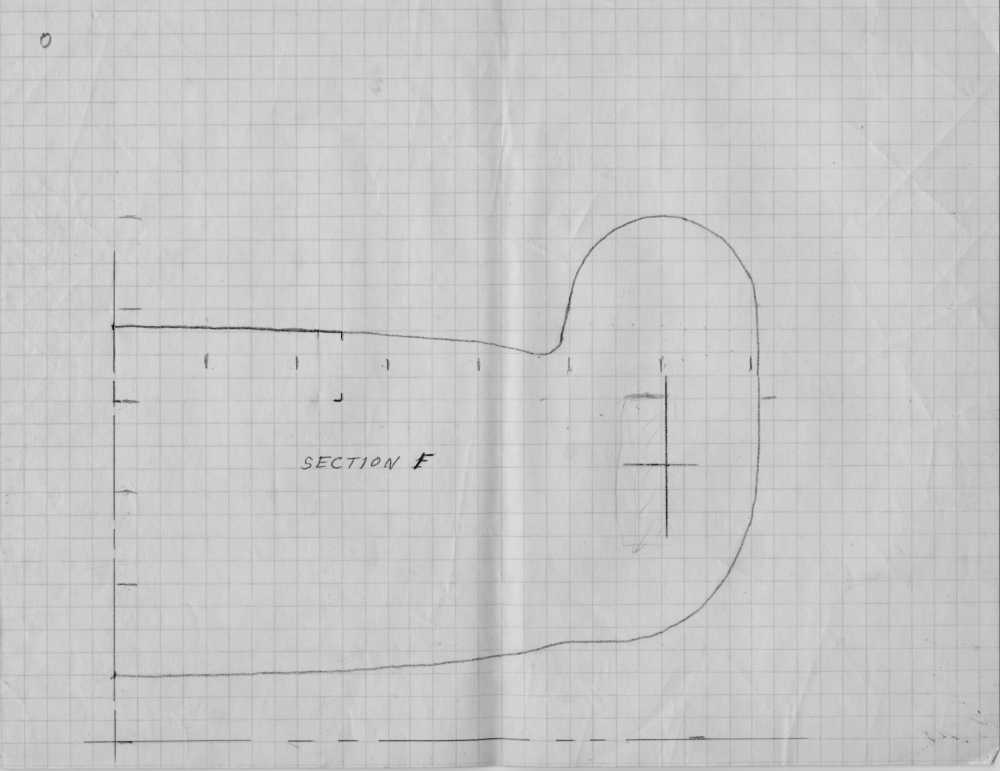 First, I transferred the sketch to a large sheet of wrapping paper at a scale of 1/4 inch to 1 inch. From this I drew cross sections, similar to what one would do in constructing a model airplane out of balsa wood and tissue paper, and transferred them to 1/4 inch ruled graph paper. We then built a 4 foot square wood frame with strings running across vertically and horizontally every inch. Laying this on plywood sheets, we were able to transfer the cross sections to full scale by making dots corresponding to where the sketches crossed the lines on the graph paper. 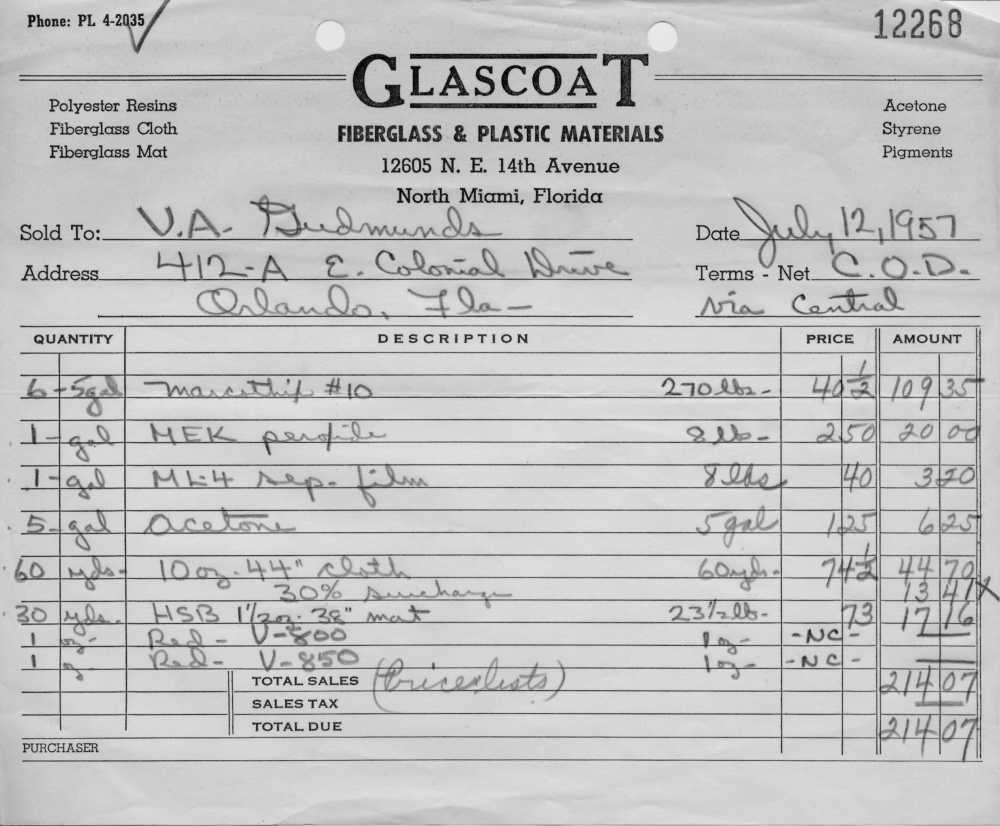 We had rented a garage, from an adjacent neighbor, where we sawed out the cross sections and mounted them on a frame made of 2 by 6’s at the height that the body would sit when mounted on the chassis. We built framework for all of the removable parts (doors, hood, trunk,etc.) and mounted them in position. Over the framework we fastened expanded metal lath which we covered with rough plaster and then with finish p laster (500 to 600 pounds of plaster total as I recall). After many hours of sanding and gallons of A and W Root Beer, we had a full scale model of the car. 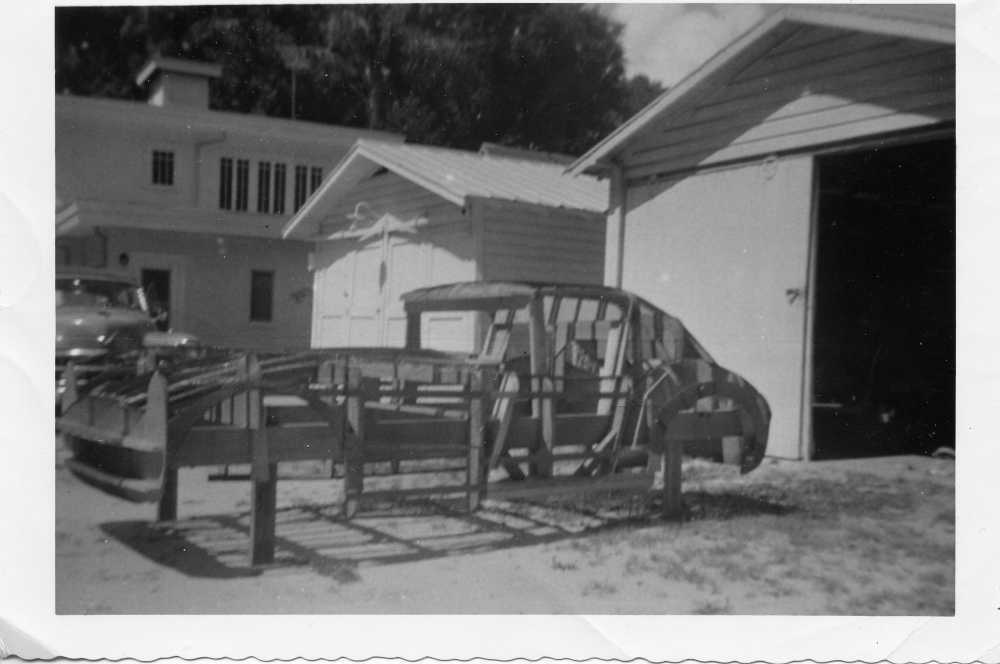 In order to build the molds and remove them from the model, we painted the model and applied mold release. Since there were many compound curves, we built the molds in sections by forming flange barriers with modeling clay. After a mold section was complete, we removed the modeling clay for that section and its flange would be the barrier for the adjacent section. When all sections were complete, we drilled bolt holes in the flanges to be able to assemble the mold for body lay up. 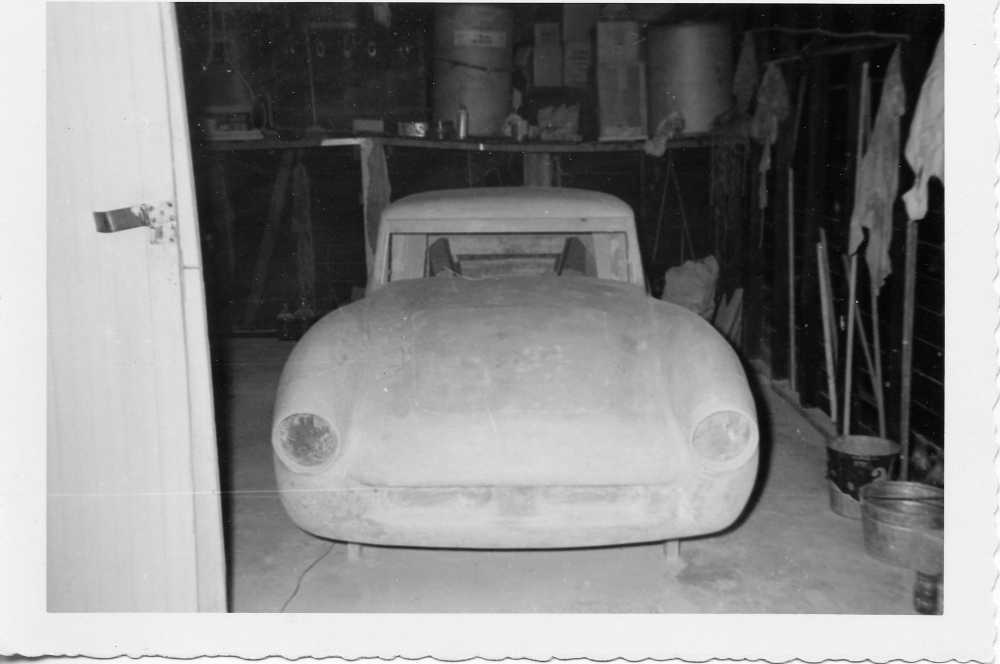 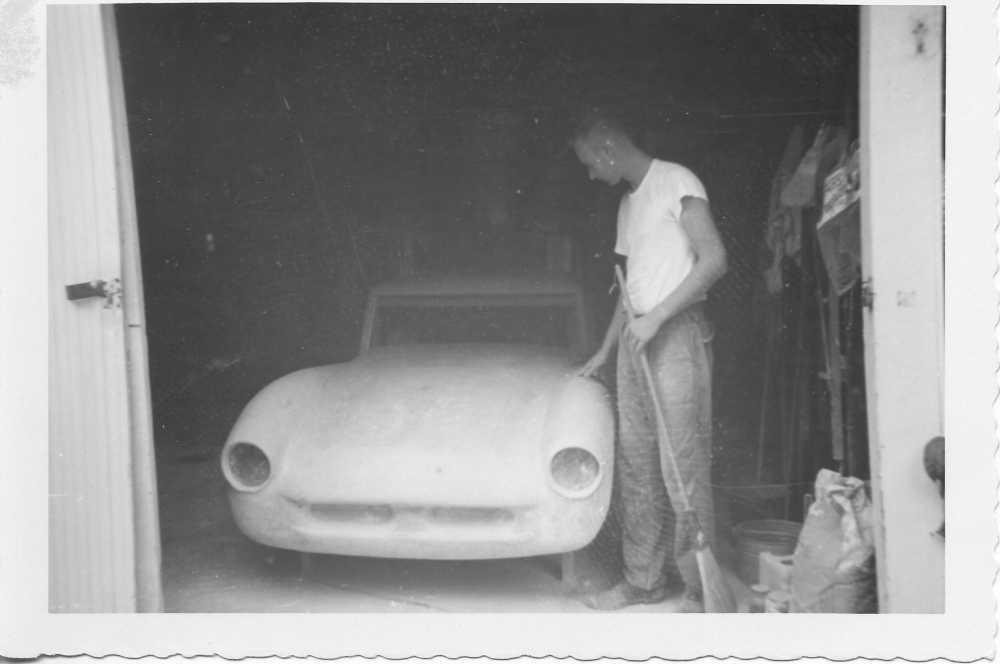 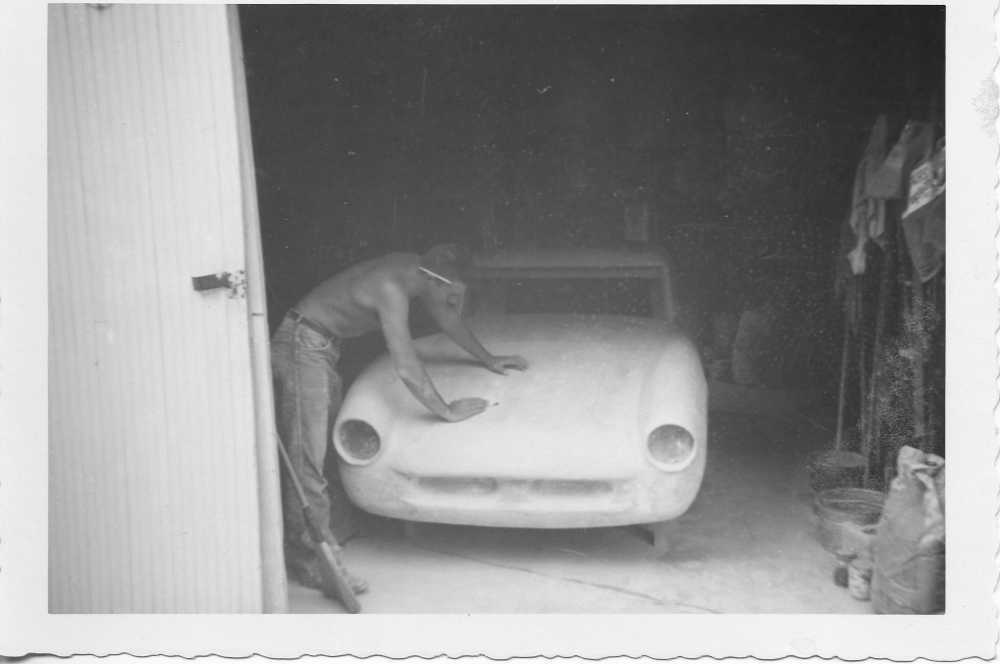 Before removing the mold sections from the model, we build a 2 by 6 frame around the perimeter of the mold and added flanges to bolt the mold sections to that frame. This would hold the mold pieces in proper alignment and allow us to tip the mold in various positions for hand lay up.  Tearing apart the mold was not and easy job. Due to the expanded metal lath, when hit with a 10 pound maul the damage was a hole the size of the head of the maul. 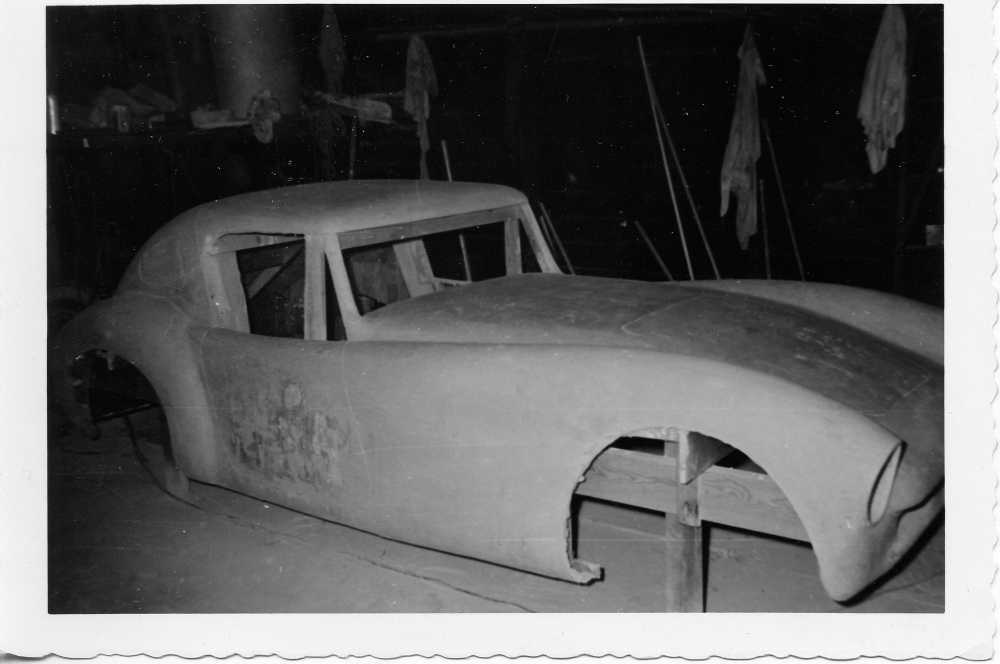 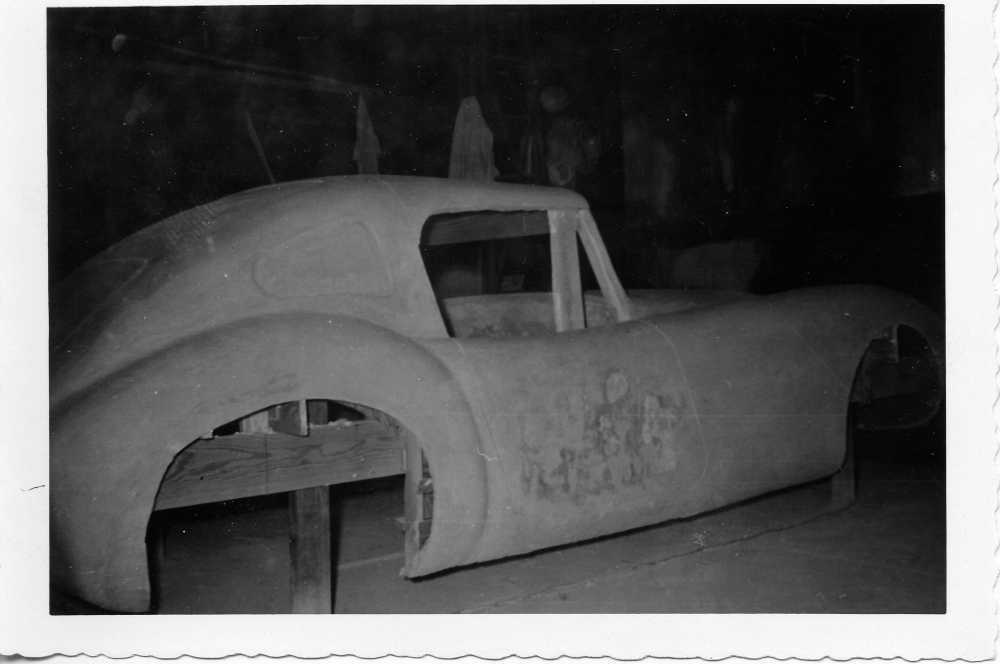 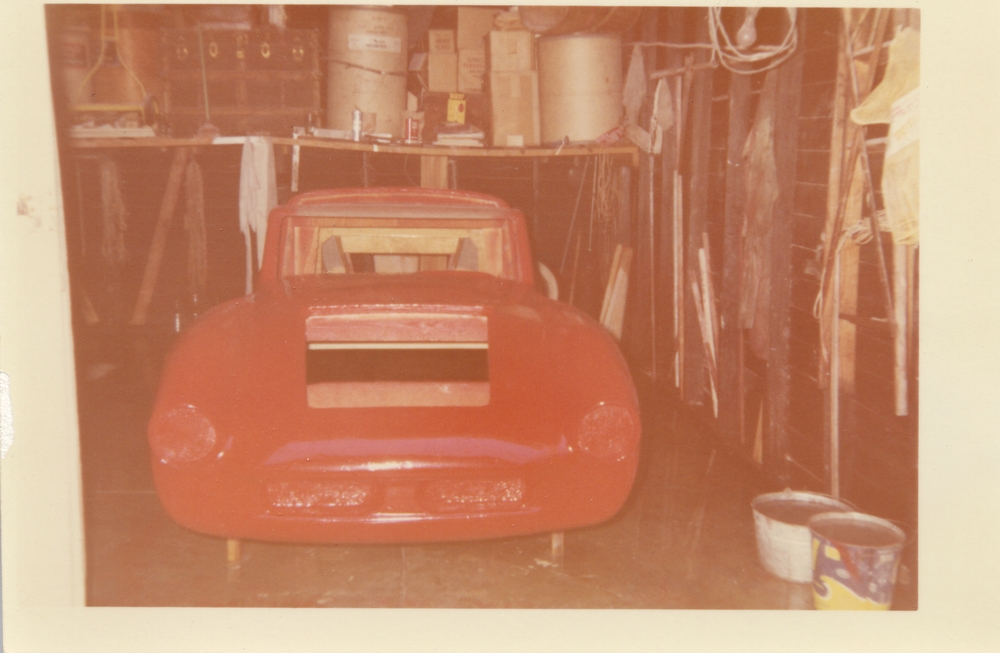 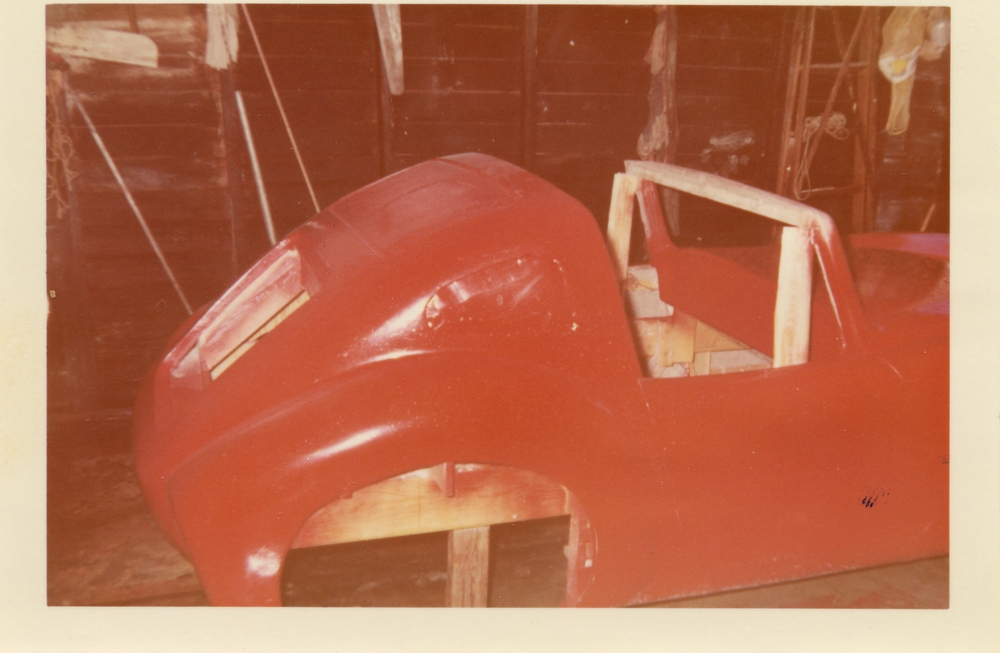 We had overstayed our welcome at the neighbors garage due to the dust we created when sanding the plaster, so we located another garage in a row of garages several blocks away. The utility electrical wires had been removed from the property, so the power company had to install a utility pole on the lot to get power to the garage.

At the new location we assembled the mold and mounted it on the external frame. We filled any blemishes and mold joint lines with modeling clay, waxed the mold and applied mold release. To imbed the Thor logo, we applied a coat of clear resin to the two locations and let it dry. Then we applied a second clear coat, laid the logo stencil on it and sprinkled glitter flakes. The next step was to apply the red color coat, followed by the first fiberglass cloth layer, followed by a cloth and mat layer. Around the headlight openings instead of cloth we used fiberglass yarn first, then cloth, etc. All of the lay up procedure required tilting the mold to avoid running of the resin. 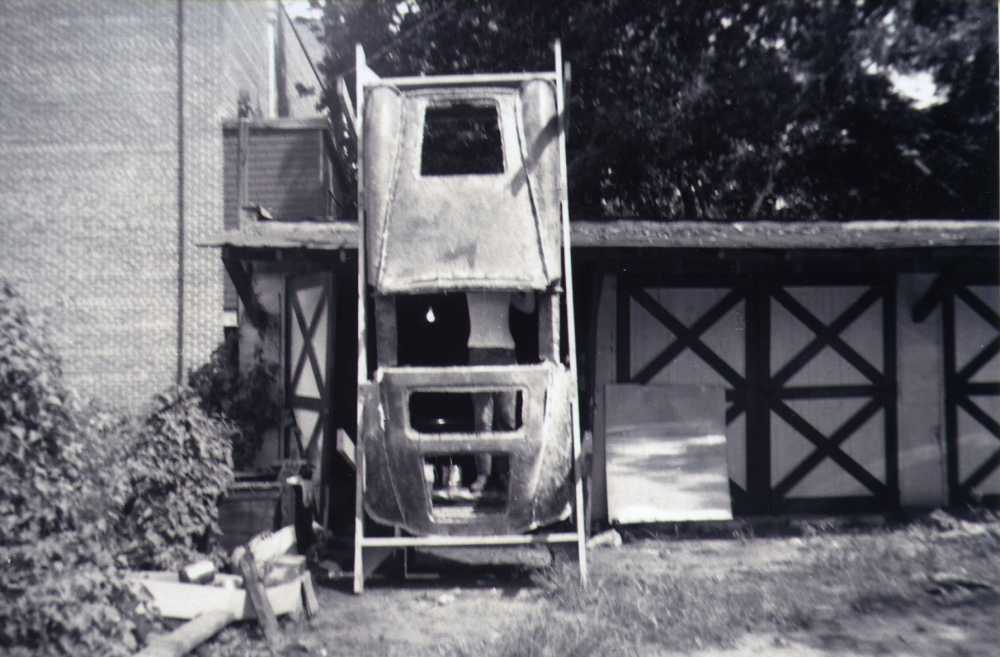 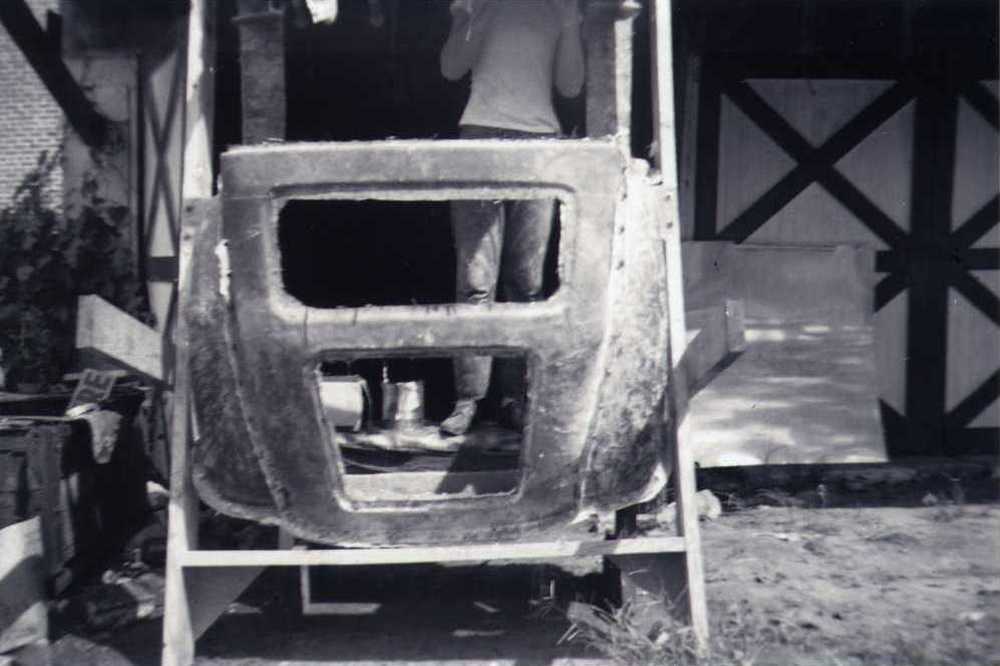 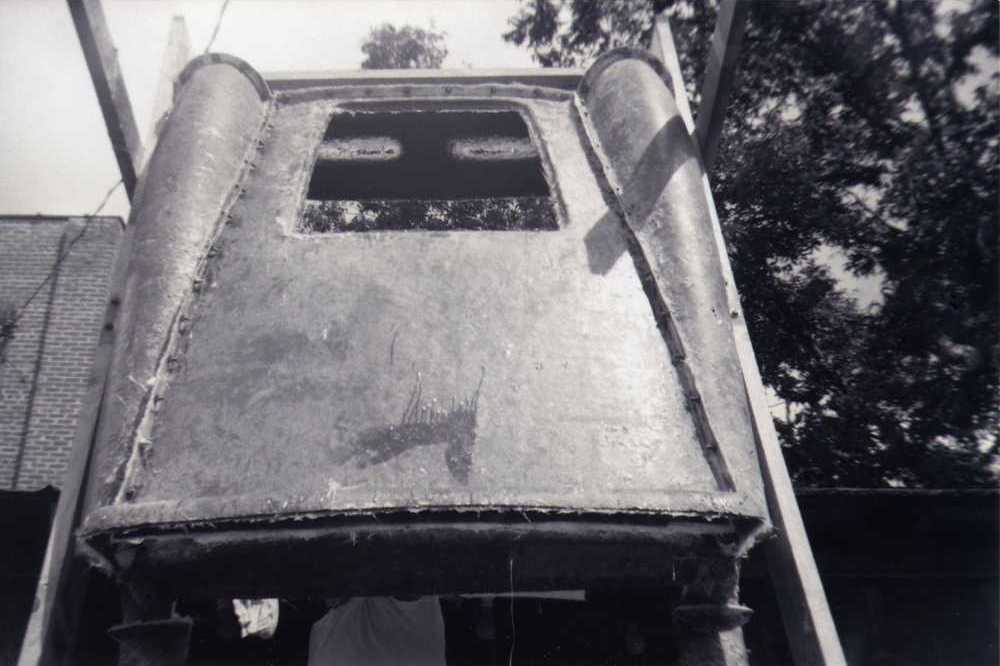 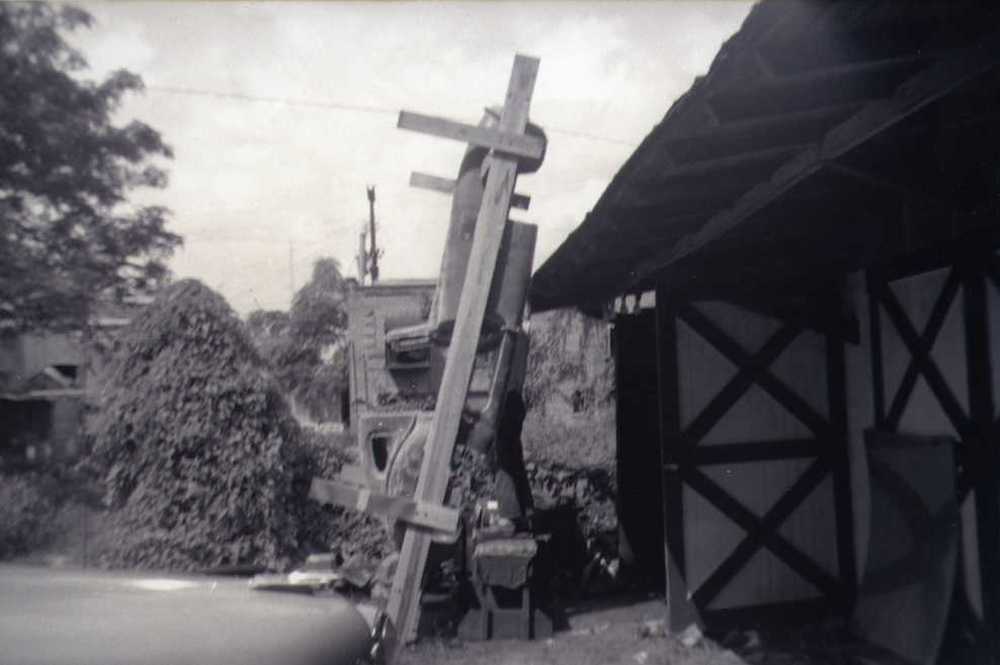 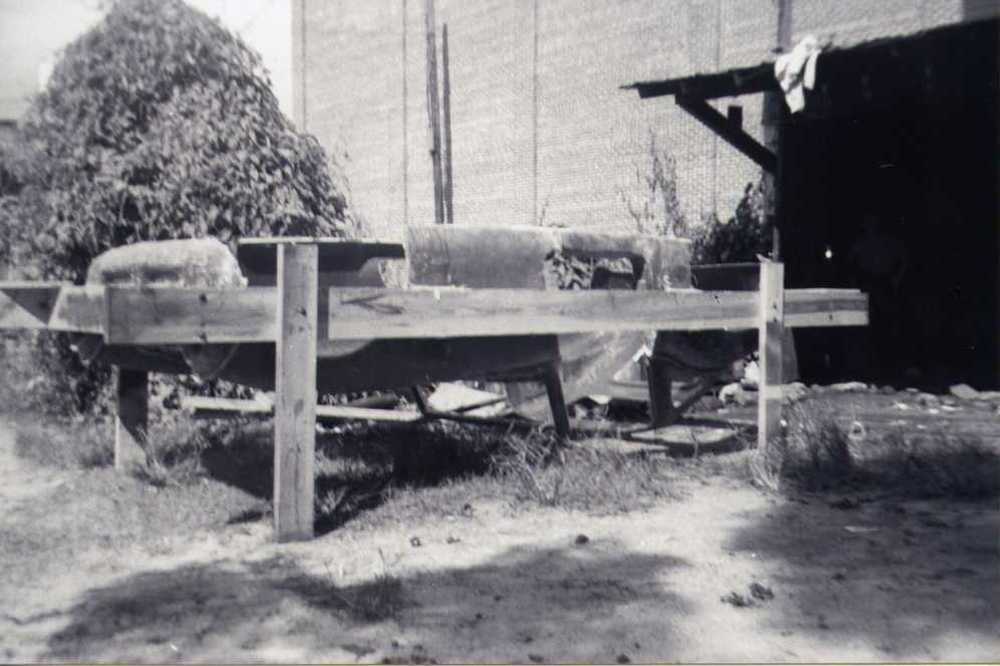 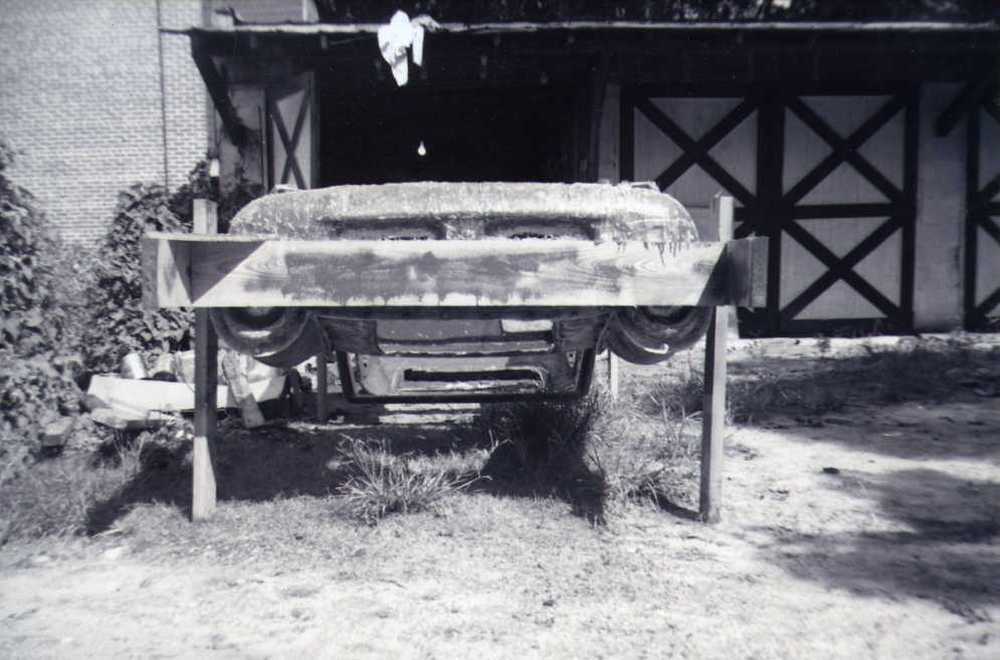 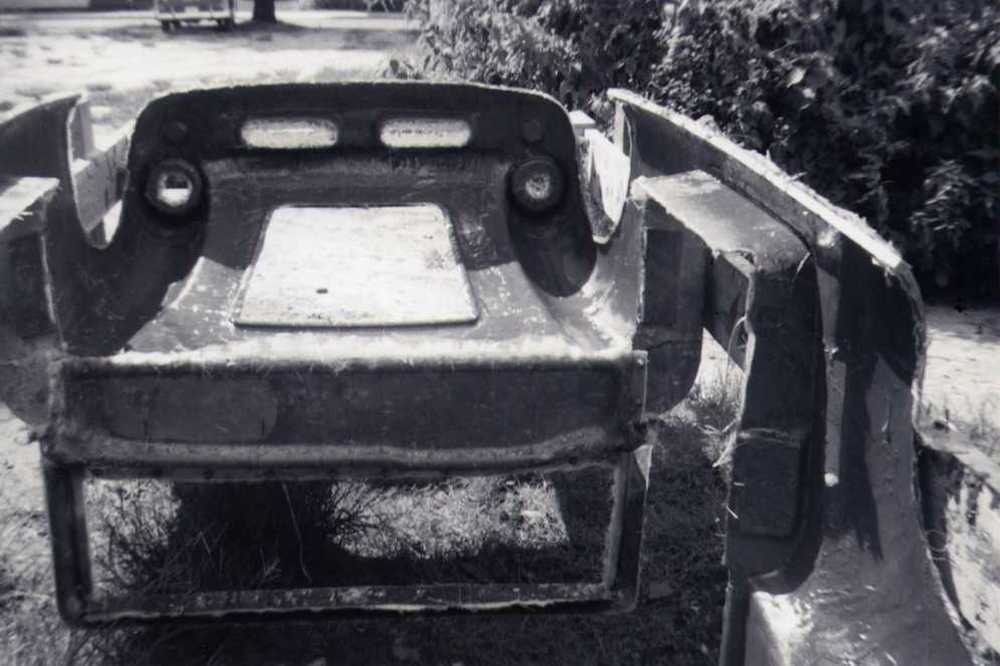 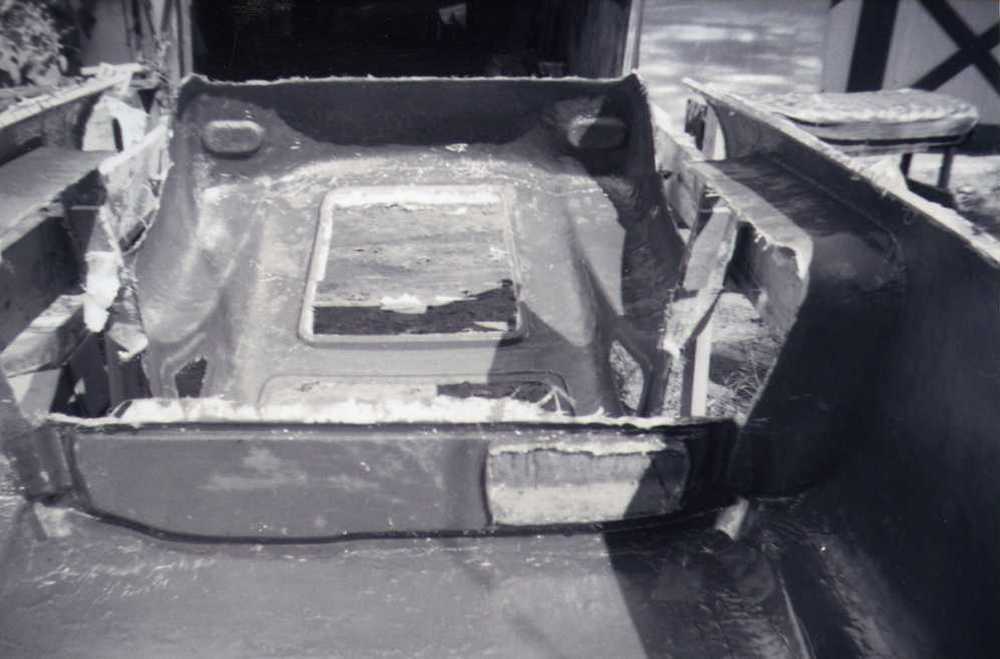 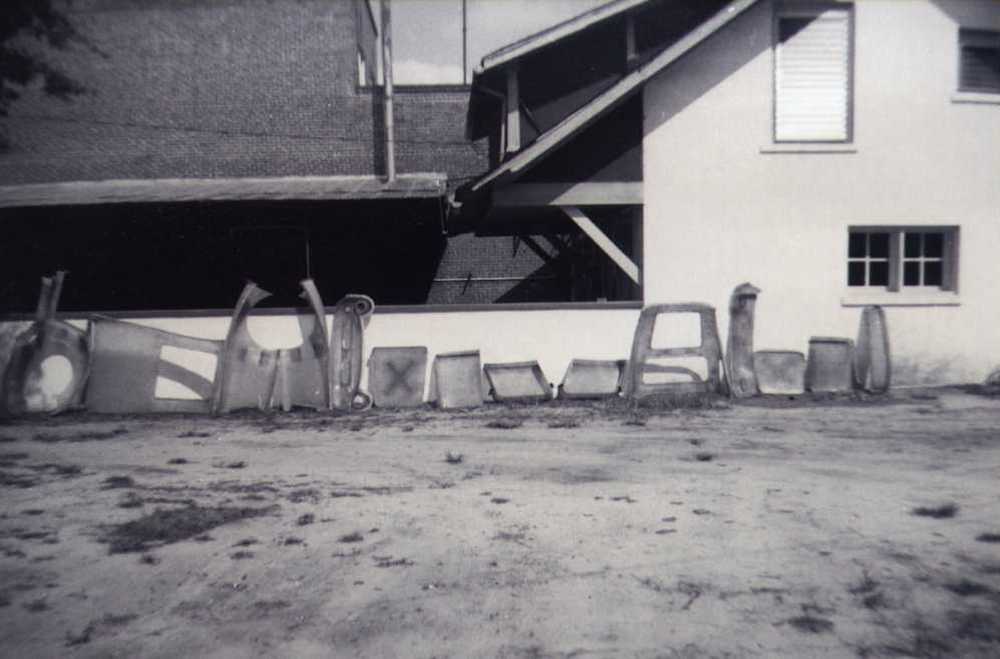 Before removing the car body, doors, hood, etc. from the molds we trimmed the edges with a sanding disk, finishing with hand sanding.  We then mounted the body on the VW chassis, installed headlights and taillights and took the pictures of the car with the red color coat.  About this time our squadron was getting ready to ship out to Taiwan, and we arranged with Jerry’s family to take the car and molds to Elkhart, Indiana to store until we returned and were discharged.

Most of our squadron went to Tainan, Taiwan, but some were transferred to other units in Korea and Japan. I went with the squadron and Jerry went to Tachikawa AFB near Tokyo, Japan. Tachikawa AFB was a repair depot and as it turned out I was able to visit with Jerry for about a week when I was assigned to escort some of our communications equipment for major repairs.

After returning to the U.S. and being discharged Jerry returned to Elkhart and I joined IBM Federal Systems Division to work on the Air Defense computer system known as SAGE. I went to the IBM training center in Kingston, New York for five months and was then assigned to the computer installation at Beale AFB, north of Sacramento, CA. On the way back to California, I picked up the molds. In the interim Jerry had built a second car. After getting settled in California, I modified the mold to build a roadster version of the Thor car body, which I still have to this day, but have not mounted it on a chassis.

Although Nik didn’t speak of the design patent that he applied for and received for the Thor, he did retain all paperwork and shared it with us.  Very few individuals took this initiative and its impressive to celebrate the history of this car and their achievements in every way. 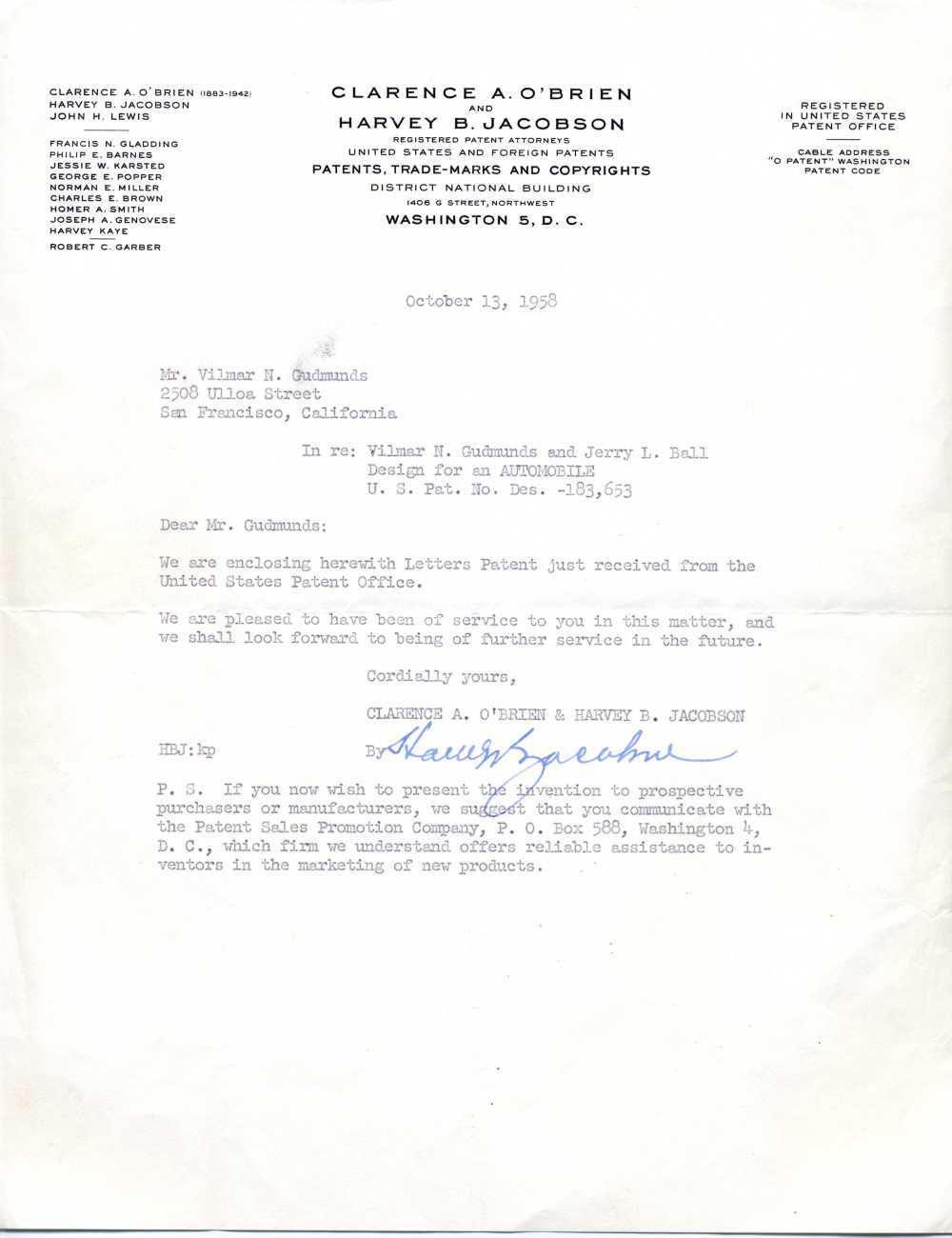 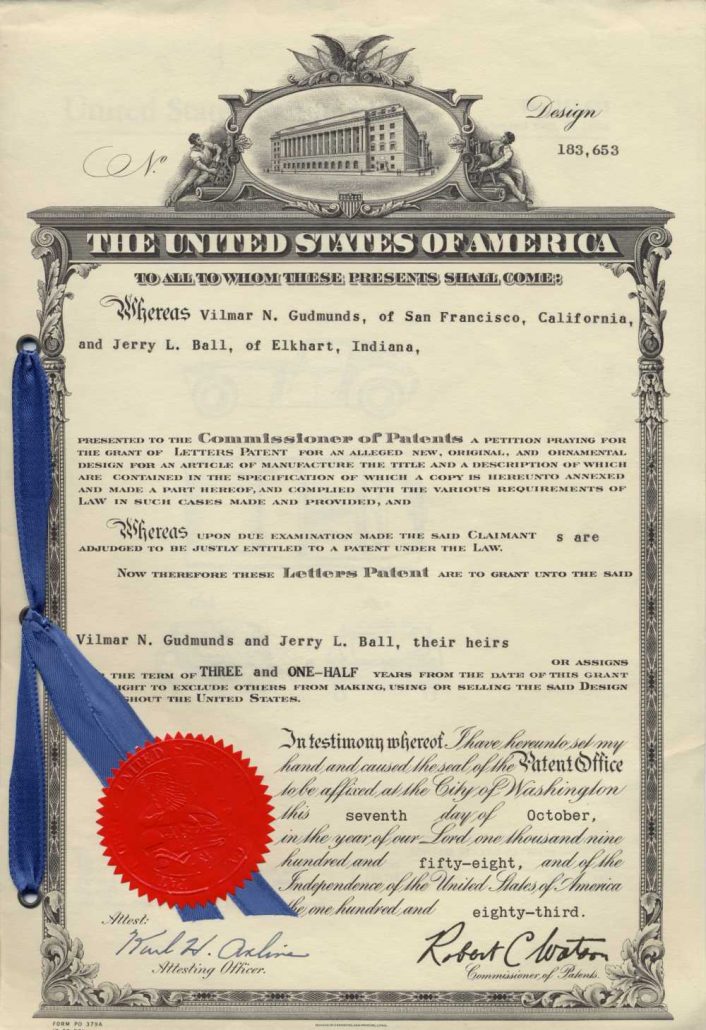 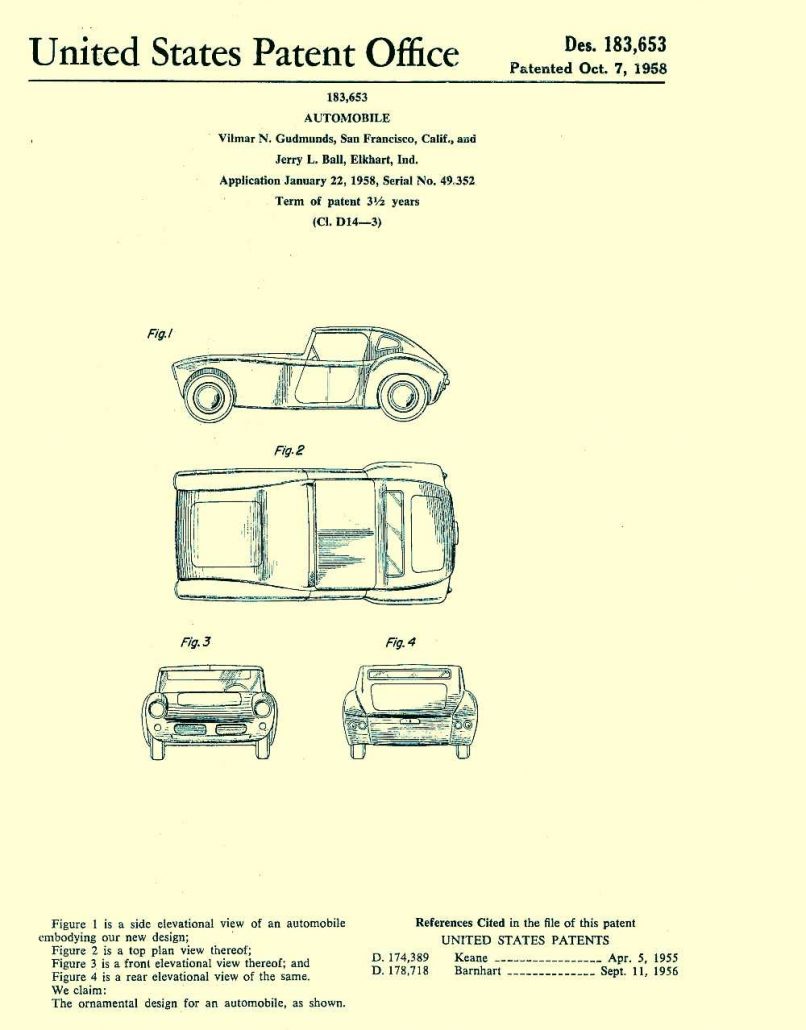 Stay tuned gang…in part 3 of this story we’ll share vintage photos of the Thor as captured in the late 50s in both color and black & white.  A sight to behold.