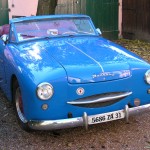 As Rick D’Louhy and I continue our pursuit of documenting the “Forgotten Fiberglass” cars of the 1950’s, special ones bubble to the surface based on design, obscurity, prominence, rarity, and interest.  One car combines all of these elements, and that’s the body built by Dutch Darrin as a sports car concept for Dyna-Panhard.

History on this car is not easy to find, since only one example was built.   We’ve had to piece together information from a variety of sources and people, and can now share with you what we’ve learned.  Let’s start by reviewing a little about Panhard.

John Bond, owner of Road and Track Magazine in the 1950’s, discussed a bit of background on this car in his 1954 book titled “Sports Cars in Action”. 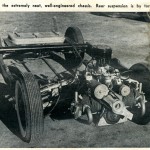 The Two Cylinder Engine Looks Odd – Perched in Front of the Front Axle. I Wonder if the Gas Tank Alone Was Enough to Hold the Rear of the Car Down.

“Among the world’s automobile manufacturers, one of the oldest and most respected names is Panhard et Levassor, producers of one of the most modern cars made today (1954)…..Still for all their long history, Panhard cars were never thought of in a sporting sense until 1948 when they introduced their postwar economy car, the Dyna-Panhard.   The significance of the name “Dyna”, by the way, is no more than if the word “Airflyte” preceded Nash.  It is simply a model name.

These first 610-cc, two cylinder cars gave such good performance that the makers sensed good competition possibilities in them.  For 1952, Panhard introduced their own sports model, the Dyna-Panhard Junior, together with a new engine of 851 cc. displacement.”

It’s this car, the Dyna Panhard Junior, for which Darrin designed an alternative sports car body.

You can review the technical specifications of the 1954 Dyna-Panhard Junior at the bottom of this story, but this is a small wheelbase car with just a 2 cylinder motor.  In comparison, the smallest fiberglass bodies in America were being produced for an MG chassis of around a 94 inch wheelbase (Sorrell, Victress, Atlas/Allied).   This car was 10 inches shorter than the shortest fiberglass body available in the USA. 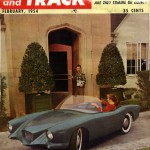 And it had a two cylinder engine – not the choice of most guys building fiberglass sports cars in 1954.  Darrin said it best about this car in a 1972 article in Automobile Quarterly:

“After designing the 1951 Kaiser I was employed to develop a new car for Panhard, a sports car, which I took to France and showed the Panhard brothers. I formed a company over there to build it. The Panhard was a fresh design from the chassis up. It was an enjoyable project, as it certainly made a silk purse out of a sow’s ear.”

You certainly get a taste of what Darrin thought on the body design of the Dyna-Panhard Junior.  And it’s understandable when looking at the alternative body he proposed.

Who Commissioned the Body?

Our first bit of information comes from the June 1953 issue of Road and Track.  In the “Late News” column, a small note indicates the following: 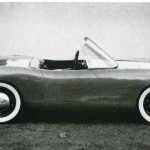 Moving forward to the 1954 February Road and Track article featuring this car, Robert Perreau (importer of the Dyna-Panhard) commented:

“if a light fiberglass body (200 lbs less than metal body) could be evolved with lines more to American tastes; this would be very competitive car, both in price (less than $2000) and performance.”

It appears that Robert Perreau was the one who commissioned the body, and Darrin brought the proposal back to France to promote it.

Cover of Road and Track, February 1954

By chance, one of the folks who has been helping us with the history of some of the fiberglass cars from the 1950’s, Robert Cumberford, remembered the car – and actually participated in the photo staged for the front cover of Road and Track Magazine.  Robert reports his memories as follows: 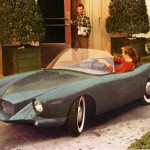 I Think if you Look Closely, You Can See Robert Cumberford Hiding Below the Dashboard on the Passenger Side

“Geoff…The car was built on a Panhard Dyna Junior chassis by Howard ‘Dutch” Darrin, who had a shop on Santa Monica Boulevard. Some of the guys from Art Center would go over there to work on some of his projects, like the Kaiser-Darrin or this little roadster. Bob Rolofson was one of the two or three snappers who had an inside line at Road & Track, and he came to shoot the cover in front of Art Center some time late in 1953.

Because the fiberglass body was a lot lighter than the steel original, the car sat up too high, so Rolofson had me curl up on the passenger’s seat and in the footwell to push the car down to the designed ride height. I was 17 or 18 at the time, but weighed 220 pounds, as I had from about age 14. Now, 57 years later, I weigh a good bit less, but probably displace more volume if I were lowered into a tank of water.

Later in 1954 I got to drive a production Panhard Junior, and it was really miserable. I cut a fast corner in Glendale near the Road & Track offices, the chassis twisted, the door popped open, and I almost fell out onto the street, saving myself from serious road rash by clinging to the steering wheel. Cars were pretty bad in those days. No rigidity, no safety door latches, no seat belts… but they were light and performed well on minuscule amounts of power.

I have always wondered what happened to that Darrin Panhard. It looked pretty good, and would have been a hot seller in California at something less than $2000, which they could have done.  Best, Robert” 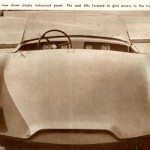 Tail Shot of Car – Very Clean Lines for 1954. The Trunk Area is Accessed Behind the Seats.

So where is this handsome little sports car?  After Darrin shipped it to France in 1954, it was never seen again.  I’ve found pictures of the car in several magazines, but mostly from 1954, after which it appears to have “disappeared”.

Jim Donnelly of Hemmings Magazine did a great story about Dutch Darrin back in 2006.  Here’s a link to review the life and times of Howard “Dutch” Darrin:  Click Here To Read

So for those of our European forgotten fiberglass friends out there, we issue you a challenge – What happened to the car after it made it to the Continent?  And…. Where is it today?

Perhaps someone overseas will have a new barn find on their hands, and if so….we’d love to hear about it here at “Forgotten Fiberglass”.

The Two Cylinder Engine Looks Odd – Perched in Front of the Front Axle. I Wonder if the Gas Tank Alone Was Enough to Hold the Rear of the Car Down. 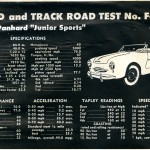 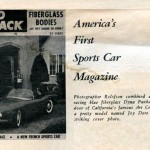 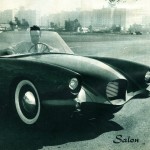 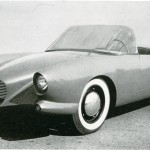 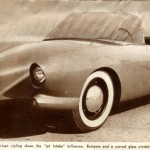 Tail Shot of Car – Very Clean Lines for 1954. The Trunk Area is Accessed Behind the Seats. 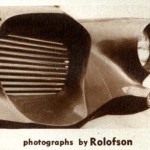 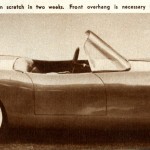 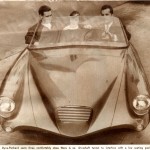 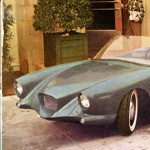