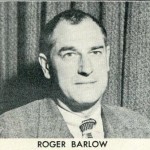 Back in May, I introduced the controversy that raged across the United States in 1950’s and beyond.  This focused on defining Hot Rods and Sports Cars, and determining their similarities and differences.  Here’s a link to that initial story:

And now for Part 2 of the story….(this one’s for you Rodney…)

On Behalf of “Sports Cars”, Roger Barlow Takes a Look at Hot Rods

Back in September 1952 in “Auto Speed and Sport” Magazine, Ak Miller squared off against Roger Barlow – both very successful in their respective areas.   In the story above, I shared the “Hot Rod Perspective” as told by Ak Miller.  Today I’ll introduce the second part of that story which focuses on “Sports Cars” as told by of Roger Barlow. 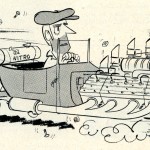 Who Couldn’t Love a Hot Rod with at Least a 12 Cylinder Engine???

As you read the article, here are a few of the highlights – starting with the background on Roger Barlow as discussed in the 1952 article:

Here are some of Roger’s quotes in the article: 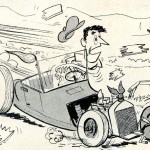 Now gang….don’t get too excited yet about Barlow’s comments above.  He goes on in the article to defend both the hot rod and the sports car, and discusses the hot rod as an “evolutionary” or “maturation” step – on the way to the sports car.  And he does this in writing with class and style.  I think you’ll enjoy his point of view.

Now for those of you who have “caught on fire” from the words of Roger Barlow….remember…Ak Miller’s words probably brought the wrath of the sports car community down on him in the same article which we discussed in Part 1 of this series.   Discussions concerning opposing points of views were not for the faint of heart – then or now.

The purpose of presenting both of these points of view is to help us – vintage fiberglass sports car enthusiasts in 2010 –  frame our understanding of exactly where our fiberglass sports cars fit into the “era” (1950’s).  That is, how they were viewed back in the day.  As such, our cars and those who built them fit into a complicated automotive world that held differing opinions concerning these types of cars – opinions which were often passed down to other enthusiasts and continue to be held and discussed today.

There are many articles in the 1950’s – and even some in the late 1940’s – that discuss this theme, and as long as our “forgotten fiberglass friends” (that’s you out there…) like these types of articles – I’ll continue to share them, so let me know your thoughts.

As I ended Part I of this series….I’ll end it the same way:

Do you have a Hot Rod or do you have a Sports Car?   Is one better than the other?  Or you can do as I do and believe that vintage fiberglass sports car guys are a rare breed indeed.  We have the “best” of both worlds. 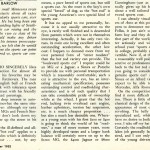 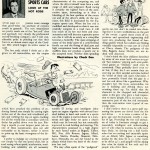 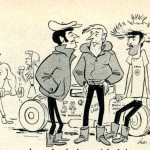 Who Couldn’t Love a Hot Rod with at Least a 12 Cylinder Engine??? 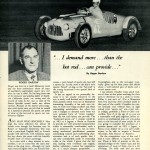 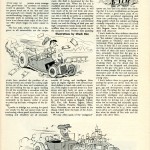 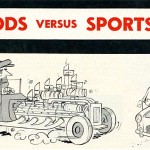