Let’s review some of the greatest (recent) mysteries of vintage fiberglass sports cars:

As Steven Covey says….. let’s start with the end in mind:

First…. Sorry I’ve been out of pocket this summer.  Lots of news to share.

* First…..we had a fantastic time on June 26th 2010 which was “Fiberglass Day” at the Petersen Automotive Museum in Los Angeles.  Some of the folks who spoke included Merrill Powell from Victress, Frank Hecox from Glasspar who built G2 bodies, Bruce Meyers – father of the Dune Buggy, Harry and Wally Hansen who built the 1950’s fiberglass Cobra sports car, and Harold Pace – noted sports car author and historian.  Thanks to Clayton Drescher of the Petersen Museum, I’ll be sharing some videos of this day with our group via the internet in the near future.  Click here for more information about the Petersen Automotive Museum’s exhibit:  Fantasies in Fiberglass.

* Second….I’ve been to the Mecca of fiberglass, and it’s not in the Middle East as legend would have.  Rather, it’s in Flint Michigan where the John Bond Archives are maintained by Kettering University.  This was the alma mater of John Bond, who was the publisher of Road and Track from the 1950’s thru the 1970’s, and Bond maintained meticulous photo and article files on specials built in the 1940’s and 1950’s.  If you like these cars as I do, a visit there would take your breath away.  It’s a window into the past unlike any I’ve seen before.  Click here for more information about John Bond.

* Third….we’re planning our next fiberglass sports car event at the August 2011 Milwaukee Masterpiece Concours d’ Elegance.  This is a fantastic event and will showcase fiberglass cars of the 1950’s as we did at the Amelia Island Concours d’ Elegance earlier this year.  Click here for more information about the Milwaukee Masterpiece.  This is the first time since the 1950’s that fiberglass sports cars will be the “Featured Class” at a major Concours event anywhere in the world.  I’ll share more information on this gang, as we count down the time to this event (just 10 months to go as of today….).

* Fourth – and the main reason I’ve been out of touch…..is…… that I’ve been told too many times that I’m “larger than life”.  That’s not a reference to my personality gang….it’s a reference to my size and weight.  So….I made a promise that I would start dieting and losing weight after I returned from the Petersen Museum show in June, and on August 1st….just days after my last story on this website….I embarked on my journey.  Vegetables are my new friend; exercise at the gym is something I do daily, and portion control concerning how much I eat  is something I’m practicing all the time.  I know I’ve made progress since August 1st…..already two pizza locations and one sports bar has closed within miles of my house.  I guess I was quite the mammoth eater.

So…on August 1st 2010 I started out at 284 lbs and began by visiting my doctor.  He set an aggressive goal for me and told me “Geoff…by the end of the year….I’d like to see you slim down to a trim eighth of a ton.”  That’s 250 lbs.  The Homeland Security Department classifies this weight as a “WMD” or Weapon of Mass Destruction if dropped from a plane at an altitude of 1000 feet or more.  Choosing your words carefully does matter, and I understood my doctor’s point easily.

As of today, October 7th, 2010 I’m down to 262 lbs with a drop of 22 lbs in about 8 weeks.  That would not have been possible without the guidance and patience of my good friend Guy Dirkin (Byers SR100, Lost Motor Trend Victress Special).  Guy has coached me at every step for exercise, nutrition, and lifestyle.  To him, I owe a debt of gratitude.   And Guy told me he’s looking  forward to seeing “less” of me with each passing day.  Not sure how to take that???   Another good friend, Jon Greuel (LaDawri Conquest) has recently begun working with me concerning exercise as well, and with both of their help, I have a decent chance of getting down to my target weight of 200lbs by next summer.  I appreciate everything they’ve done for me these past 8+ weeks. 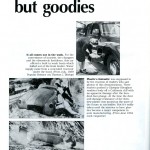 Ok…this is a mystery and I can’t seem to solve it.   Perhaps one of you can help.  Back in March/April 1994, Special Interest Autos published an “Oldies but Goodies” column showing two pictures of a Glasspar G2 body being pushed off a cliff.  This was done to promote the durability of flexiglass to a questioning public.  Checkout the pictures at the bottom of this story.  Here’s what was said in the article in SIA at the time:

“Plastic’s fantastic was supposed to be the reaction of readers who saw photos of this demonstration.  Three starlets pushed a Glasspar fiberglass roadster body off a California cliff with no apparent damage after the hundred-foot plunge.  At the time, the dent and damage resistance of the then new plastic was touted as the wave of the future in car bodies.  But it’s really taken until the nineties to have plastics become a major component in auto manufacturing.  (from Look June 1954).

So…great article and I wanted to find the original and share it with everyone.  Problem is….I’ve looked at Look and Life and other magazines from 1954 ….no such luck.  No such article.  Maybe I missed it, but I looked carefully.  I’ve talked to all my Glasspar friends, and they were aware of the SIA 1994 article, but no one can find the original reference or article.  I’ve even contacted the folks who were part of SIA in 1994 and the original material has long since been filed away and no longer available.  So it remains a mystery only you can solve. 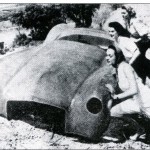 So….take a good long hard look at the pictures and let me know if any of you have this article out there.  If you do, I promise to share it with everyone on our Glasspar G2 page on our Forgotten Fiberglass website.  Click here to see what’s already available to each of you.

Recently, led by the industrious and hard work of Scott Miller as well as good friend Tim Masters (also Lead Guitarist of the Midnight Bowlers League here in Tampa Florida…click here to learn more about the band) we were able to complete the California Special and take it out for a spin – first time in years it’s been on the road.  And boy does it sound great!  I don’t want to connect the mufflers now or later.  It sounds too good.

Daniel Strohl of Hemmings Magazine was kind enough to cover our efforts and recently shared the story about this car and the class of cars we’ve begun to call “Mysterions” with their Hemmings viewers and readers.  Click here to view the article about the California Special (Mysterion) that appeared on the Hemmings Blog on October 7th, 2010 .  This was a very nice story with recent video included of our inaugural drive.  And…it’s important in our quest to bring appreciation and respect to a class of cars that pretty much has been ignored for 50 years.   So….we’re going to start a “Mysterions” club and nominate a President soon.  Darren Swanson….Mike Acerra…..(both Mysterion owners) who can I pass the torch to early next year – soon to be called “The Year of the Mysterion….”??? 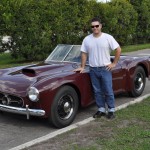 So….as typical….nothing I write is short.  A mentor of mine used to tell me….”I didn’t have the time to write you a short letter – so you got this instead”.  “This” was usually a long letter with pictures and notes that went on and on and on…..(sound familiar?)  There’s always so much to share, so my apologizes for droning on if you made it this far.  But for those of you who did….here’s a window into the future in terms of fiberglass and other news…

1: Get ready for a 3 part story on Harold “Shorty” Post, his race car, frame building, relationship with Glasspar and his famous streamliner too.

2: Soon….everything you wanted to know about Jim Craig’s and John Buzby’s Gazelle (later called the Navajo) will be revealed.

So stay tuned and keep your computer monitors ready, willing, and able.  Now that I’m turning into a “fiberglass athlete”….I can finally do more stories on our website.  Maybe even send two stories out a day!  That would be great…wouldn’t it gang? (I can hear the “droning” noise from each of you….here in Tampa Florida.)

Hope you enjoy the story today, and look forward to sharing more soon. 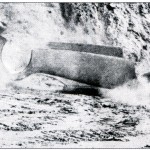 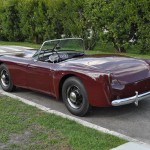 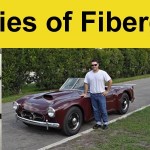