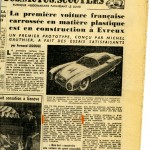 1953 Newspaper Article presenting a Colani Design for the First French All-Plastic Car – What a Coup!

I’d like to stray outside of American Fiberglass and go overseas.   Rob Daniels who runs the 1950’s Specials Website focusing on Foreign Fiberglass Cars may be able to help here too.  Off to some foreign fiberglass from the 1950’s and beyond.  Let’s talk a bit about Luigi (born as “Lutz”) Colani – the artist, sculptor, car designer, and futurist.

Albrecht Bangert wrote the definitive book on Colani in 2004 named “Colani: The Art of Shaping the Future”.  If you like space age, biomorphic design….Colani is right up your alley.  The title of the book by Bangert (no relationship to Noel Bangert Marshall from the 1950’s Bangert Enterprises – the Fiberglass Car Company) was perfect for the designer and man.  Colani was born in Germany, but as a fledgling 19 year old college student in 1947, decided to pick up and move from Berlin to Paris.   In 1952 he wrote a 4 page article on a turbine powered motorcycle which gained quite a bit of attention. Around that same time he started considering fiberglass as the new medium to begin working in.  He had already moved his home base once so he decided to move again.  This time….America.

So in 1952 Colani was California bound.  He started working at the Douglas airplane factory where he held a job in the “New Materials Department”.   It’s interesting he did this – considering the location, time, and industry.  There were several of our legendary fiberglass founders/designers who worked in the aerospace industry too around that same time.  And probably for the same company.   Doc Boyce Smith of Victress, for example.  Others too. 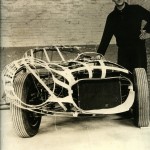 1953: Colani Creating the Shape of the first Plastic/Fiberglass Simca based Coupe.

This gave each of them them experience in the use and application of fiberglass – where no other businesses besides boats (Glasspar, for example) could readily do so.  And given the number and variety of aerospace companies who had businesses in So-Cal during this time, Colani had put himself dead-center, ground zero in the fiberglass automotive movement in America.  Talk about timing!

The next piece of luck came from a fortuitous visit from a French Simca executive (Monsieur Pigozzi, CEO of French Simca Car Manufacturing).    Based on what Pigozzi had seen of Colani’s work – both in France and the USA, Colani was offered a job and whisked back to France.  Within the next 12 months at Simca, Colani had moved to the Development Studio and began working with others on the first French sports cars that used fiberglass reinforced plastic bodies.

Colani’s next move was to focus on creating plastic car bodies for race cars, and in this area he worked with Bertrand du Pougt – who assisted each year with the Le Mans 24 hour race in France.  In the same time frame, Colani also worked with Charles Deutsch and Rene Bonnet and helped style and produce racing bodies for their 2-cylinder Panhard engines based race and sport cars.

By 1954, Colani decided to return to Berlin and as Bangert aptly stated in his book, Colani took with him back to Germany, “the idea for an all-plastic car body, and the dream of becoming a car designer who could go it alone as a freelancer.” 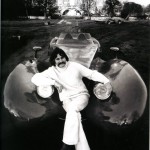 There is much more to the story of Colani and his talents – not only in the area of cars – but in furniture, housing, and other areas of transportation.  I thought I would whet your appetite for some of his work and showcase his 1953 car – and some of his later work too.  I’ve included photos of some of his other work on cars below – to give you a flavor of his work, style, and approach to the design of cars.  There’s a beautiful VW based kit that Colani designed too.  Harold Pace mentions that more of these are seen in Europe than the US, but no matter where they appear – they are beautifully designed.

I hope you enjoy these pictures and great thanks to Albrecht Bangert for his thorough and detailed research concerning the history of Lutz Colani – and for creating such a wonderful book. 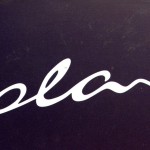 1953: Colani Creating the Shape of the first Plastic/Fiberglass Simca based Coupe.

1953 Newspaper Article presenting a Colani Design for the First French All-Plastic Car – What a Coup! 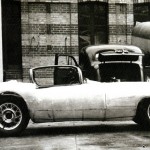 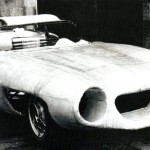 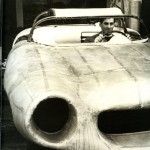 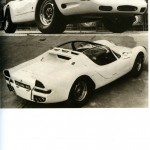 1965: Limited Edition of Racing Car Based on VW Chassis 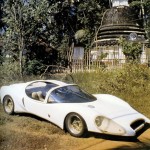 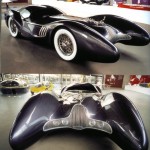 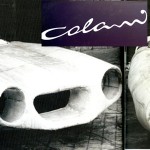