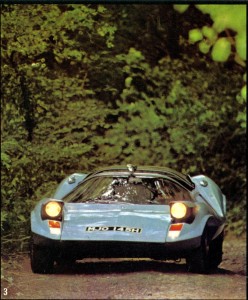 Caption: Retractable headlights rise out of the bonnet when needed and entry to the car is through an electrically operated roof which slides back.

Ever since I found the “Shark” when I was 17 years old, I think I’ve been hooked.  Especially when I look at them today – in terms of what the future looked like in years gone past.  “Yesterday’s Tomorrows…” so as to speak.

So if you like “future cars” like me, you’re going to love the “Probe 16.”  This was conceived by “The Adams Brothers” design team – Dennis and Peter.   Dennis Adams is the designer of a beautiful car called the “Marcos 1800” for those of you who are UK sports car fans.

The Daily Telegraph Magazine Promotes An Adventure in British Styling, in Cooperation With The Institute of British Carriage and Automobile Manufacturers.

The Probe 16, a completely new car, fully operational and ready for the road, was designed by the Adams Brothers and chosen by The Institute of British Carriage and Automobile Manufacturers and The Daily Telegraph Magazine for exhibition at the 1969 Motor Show at Earls Court as an example of what independent British Stylists can do.  Here we give details of the Probe 16 and information on some other leading British stylists.

The Adams Brothers: Dennis and Peter

The Adams Brothers, Dennis and Peter, work in small, but efficient premises by the river at Bradford-on-Avon.  Dennis, 37, does the styling and Peter, 30, the engineer, has to make the cars work.  Their latest effort, shown in this brochure and on the special stand organized by The Daily Telegraph Magazine and the Institute of British Carriage and Automobile Manufacturers, is Probe 16, an exciting, futuristic coupe powered by a British Leyland 1800 engine mounted behind the driver.

Like Grand Prix racing cars, Probe 16 has smaller wheels at the front than at the back – 10 inch wheels in front of the driver and 13 inch wheels behind.  “It was just a private fancy to get something as low as possible and doing whatever was necessary to achieve that,” said Dennis. 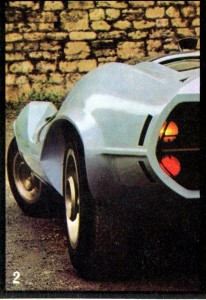 Dennis Adams is probably best known for his styling of the Marcos 1800.  He has also done a compact city car – which is tipped up on end for parking – and numerous other design exercises.

If you’re a movie fan, some of you may recognize this car.  A Probe 16 was featured in Stanley Kubrik’s movie “A Clockwork Orange.”  Those of you wanting to know a bit more about this car and its designers, checkout the following website about the Probe 16 and related cars designed by the Adams Brothers:  The Probe / Adams Bros Website 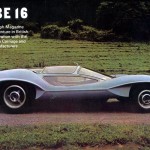 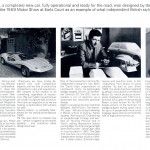 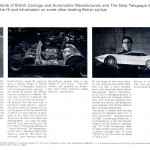 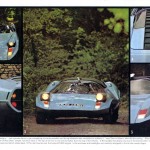 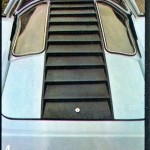 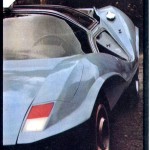 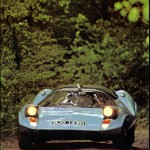 Caption: Retractable headlights rise out of the bonnet when needed and entry to the car is through an electrically operated roof which slides back. 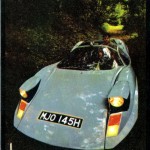 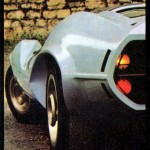 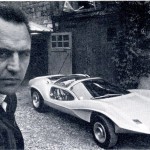 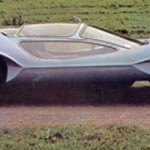