So….without adieu….  I present the next in what will be a series of articles (unstoppable) called…

Little did you know about the dangers that owners faced back in the 1950’s when building and driving fiberglass bodied sports cars .  I’m not talking about lack of safety equipment.  That’s a given.  Most any “Detroit Iron” back then would have pierced a fiberglass sports car like a jousting pole at a Medieval Fair.  What I’m talking about are the police.  That was the real danger! 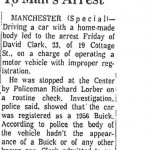 One of our gang, Marshall Foxworthy, researcher extraordinaire from the Atlanta area of Georgia recently sent in a short article that caught his eye.  You can read the article as well – it’s on the left – just click on it.  But here’s what it says for those of you who might want it in an easier format:

Driving a car with a home-made body led to the arrest Friday of David Clark, 23 of 19 Cottage Street., on a charge of operating a motor vehicle with improper registration.

He was stopped at the Center by Policeman Richard Lorber on a routine check.  Investigation, police said, showed that the car was registered as a 1956 Buick.

According to police, the body of the vehicle hadn’t the appearance of a Buick or of any other known car.  Clark admitted to police that he had made the body by hand from fiberglass (for shame! – Geoff adds) and that he had not notified the Motor Vehicle Dept. of a change of body style.

Who would’ve thought this might have occurred.  Heck – if they still enforce this law, I’d be in jail forever.  I have 2 or 3 cars that I even don’t know what they are.  If I finish the “Forgotten Fiberglass” book from jail, at least you’ll know that my good friend Rick D’Louhy can finish all the important stuff from the safety of his home until I get out of the “big house”.  We’ll have to make up some names for the Mysterions I own though.  Sacrifices….

Since I did not have the chance to build one of these cars and drive them in the 1950s, I’ve gained some evidence of this type of problem – and other types of issues too – through conversations with those who were builders and drivers back in the day.   One conversation I recall was with car builder and current Victress owner, Alan Emory.

Alan’s a special guy.  To our knowledge, he’s owned a Victress S1A longer than anyone else.  He purchased his car in December, 1962 and has kept it since then.  And prior to 1962, he purchased his first Victress S1A in 1958.  So Alan has been a continuous Victress owner for over 52 years.  Very few have owned their cars for this period of time – Alan has and is quite the fiberglass sports car enthusiast.

During one of my conversations with Alan, he told me a story.  Back in 1962, he had found his second Victress S1A and wanted to bring it home.  He and his friend drove to where the car had been stored for many years, and towed it attached by rope/chain to the lead car.  Alan was steering in the Victress.  He found the car in good shape, but it hadn’t been started for awhile, and it had some fender damage too.

About half way home, he decided to start the car – and idle it during the trip.  It worked – and smoked like a fiend!  All was going well, and as they went over a hill….the coppers nabbed ’em!  Houligans that they were….*wink*

After inspecting what they were doing (towing a car with another), they ticketedAlan with 5 citations:

Quite a bit of harassement there for such a courageous driver as Alan.  Alan took the ticket and paid the fine – and still has the car today.

I’ve talked to other builders during the day that were fined for lack of bumpers – or bumpers that were too low.  There may have been other problems too.  So building and owning a fiberglass sports car was not for the faint of heart.  You had to really watch what you did to ensure you met the standards for the local laws/ordinances, as well as drive safe too.  Not an easy path to navigate for many, I assume.

I found a great little film/video completed in 1952.  It talks about “hot rod safety” and involves early dry lakes scenes most likely starring the “Road Runners” club – the name of the film.  That’s an assumption, so I could be wrong about the name of the club, but it was certainly filmed “in period” during the golden years of hot rodding.

If any of you have stories of your hot rod days and coming up against laws that affected the building – and driving – of your car…be sure to let us know in the discussion forum.

Hope you enjoyed the film and..

Update: 5/20/2010:  I have to add another feature flagged by law enforcement.  One of the reasons I found my 1961 Covington Tiburon in pristine shape was that it couldn’t be run on roads in California in the mid 1960’s.  California required safety glass and Florida did not.  The car came with a custom plexiglass windshield.  Hence, the car was never taken out of the garage from 1965 thru around 1998 when it was sold to the people I bought it from.  GH 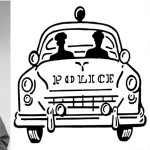