We have some great people, great stories, and great cars out there – and the purpose of Forgotten Fiberglass is to create a community and celebrate stories such as the one we are sharing today encouraging folks like Barry Fagan to complete their cars.  After all, there’s no better feeling than driving one of these on the backroads of America – or sharing your work at a top notch show – so that everyone can appreciate the fun and excitement of seeing these vintage ‘glass sports cars alive and kicking again.

Let’s hear from one of the recent additions to Forgotten FIberglass – our newest fiberglass aficionado and friend Barry Fagan.

Take it away Barry 🙂

I’ve enjoyed reading the posts on all the great cars on Forgotten Fiberglass, and talking at times with Geoff, Rick D’Louhy, Harold Pace and Phil Fleming at the 2014 Carlisle Import and Kit Car Show, and I thought I’d share some words and pictures on my cars, even though they are “not ready for prime time”.

The first is a 1959 Devin kit car. A lot of guys tend to get in trouble when their wife goes out of town, and I guess I’m no exception. Luckily, my dalliances are mostly with automobiles, although that still seems to have an impact on the marriage. In 1993, my wife took our then newborn son (now a 21-year-old) off to visit relatives, leaving me with some time to kill. The Internet wasn’t nearly the tool for searching for old cars that it is today, but we did have regional newspapers full of classified ads for vintage, muscle, and collectible cars.

While perusing one of these, I ran across a small photo add for the car in the photographs below, located about an hour and a half from my house. By the time my wife and son got back from relatives, the car was sitting in the barn.

The car itself was built by a private individual in 1959, using a Devin kit body over a 1949 Chevrolet frame.  He installed a Corvette motor (yes, I have the Corvette script cast aluminum valve covers and the block has the appropriate stampings & casting numbers) that was a test engine from the Morraine Division of Delco-Morraine, a Hydromatic transmission & a 1957 Pontiac rear end. 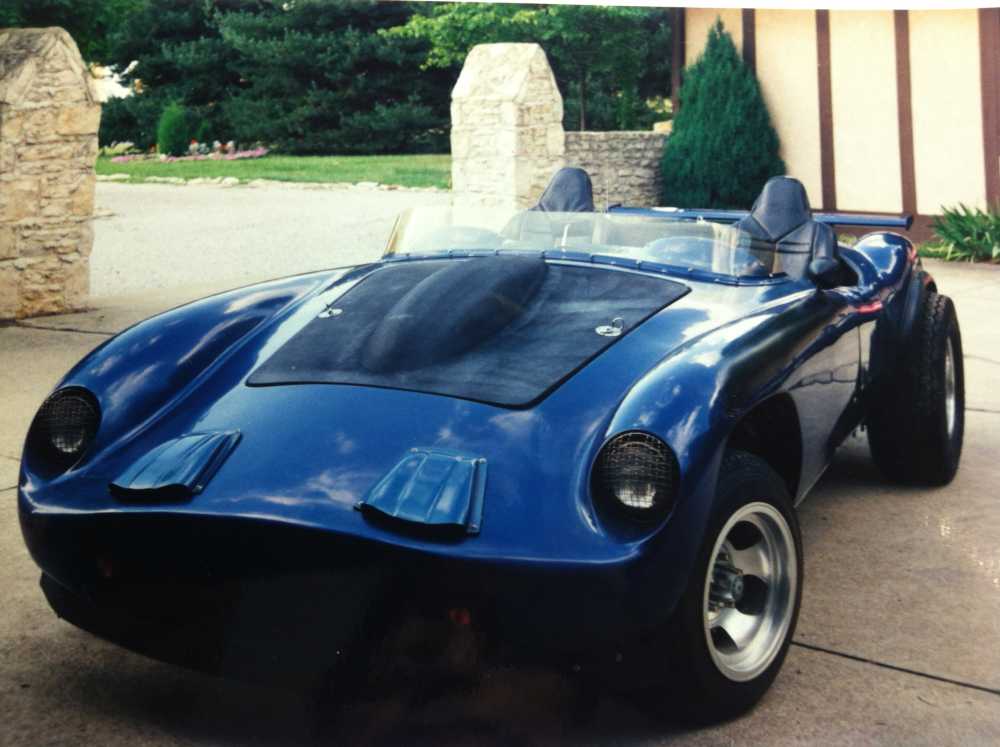 He used the car exclusively for drag racing.  The color reminds me of the shade of blue that the Echidnas were painted, but I haven’t been able to confirm this.  At some point in the mid 1960’s he modified the appearance of the car. By my reckoning, he must have gone through the J.C. Whitney catalog and ordered an accessory from every page – scoops leading nowhere, a rear wing, tiny steering wheel, barefoot gas pedal, etc.

He put the car away about 1970. I believe he was undergoing a divorce in 1993, & offered it for sale for a very reasonable price.  I inspected the car & bought it at that time.  The photographs that I’ve enclosed date from that time.  The former owner had suggested that he would forward the car’s drag racing log book, but that did not occur.

After his divorce the owner left for Florida, and has not responded to my attempts to contact him over the years.  I was able to locate his son in Ohio, but he too, claims to have lost contact with the owner. My point with all this is that the car does have an established race history, even if I can’t back it up with a logbook.

I have little interest in drag racing however, & yearn for a sports racer along the lines of a Devin SS.  My budget won’t allow the SS, however, and my thoughts run along the lines of modifying the mechanicals of this particular car for road racing.  To that end, I have purchased a set of 15” 72 spoke wire wheels, and a worn out Jaguar sedan of the appropriate vintage for brakes & suspension, & plan on chasing down a period-correct 4-speed before welding up a tube frame a la Devin SS. 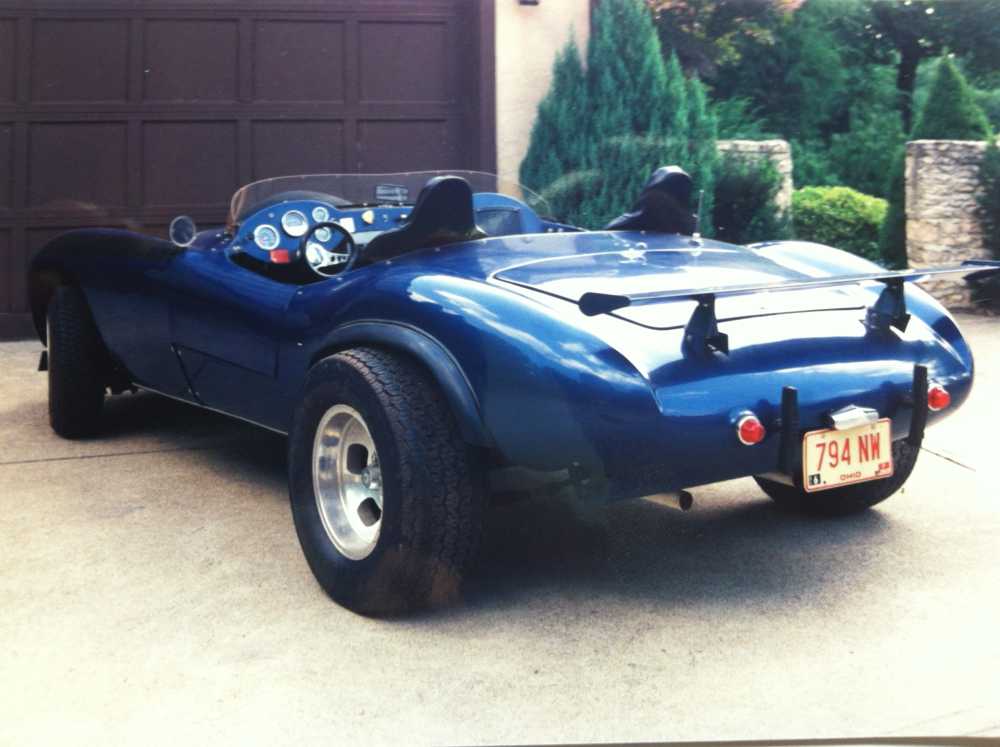 As I study the car critically, & compare it to authentic Devin SS’s, I can identify confounding issues. It’s well known that Bill Devin was heralded as a genius for making modular molds so that his bodies would fit everything from Crosleys to Cadillacs.  What is production genius is not necessarily artistic genius however.

My car is an X-6 (Bill Devin’s favorite model, according to a phone conversation I had with him in the 1990’s) and it is a very large car, with 6 inches of width spliced in, and a wheelbase closer to 106 inches than the original 92.  As such, I feel it lacks the graceful proportions of the original Ermini splash, in the same way that Dolly Parton might look a little out of proportion at 6 feet tall.

There is a lot of empty space in the cutout behind the wheel on the front fender, the air intake seems ponderous, and the body lacks much of a kick up for the rear wheels behind the seats. I got stalled for quite some time on the issue of whether to leave the car original and as raced, or to modify it further, to suit my tastes, and bring it up to a higher aesthetic and mechanical standard. 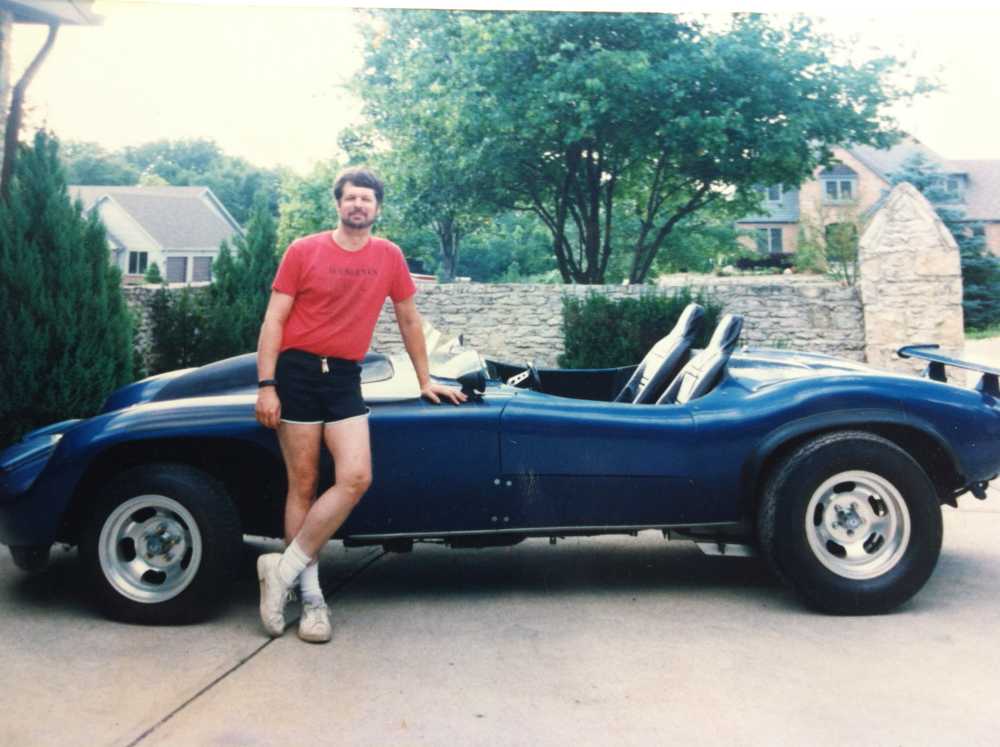 I actually brooded on this for more than a decade, before writing Geoff late one night to have a philosophical discussion on the subject. I e-mailed the letter to him a little after midnight, and got an answer back about two o’clock in the morning. By about nine o’clock the following morning we were discussing the subject by phone (I guess Geoff doesn’t sleep much!), and now I’m in the process of trying to bring it up to a higher standard. The original workmanship was not bad, but neither was it “magazine cover” material.

In my conversation with Harold Pace, he made some good mitigating suggestions, such as filling the space in the wheel well with headers and adding white side pipes to visually shorten & lower the car. Geoff also provided some further suggestions, such as lowering the floor pan, as the seats tend to sit too high, and the driver appears to be sticking up much higher than the windshield.

As a dry run for what this might look like, and lacking any Photoshop skills, I simply cut the appropriate pieces from color photocopies of other cars, and pasted them onto a photograph, as seen below. My choice of photographs was limited, so on one I appear to be standing behind the outside exhaust, which are simply sketched in using a silver marking pen. 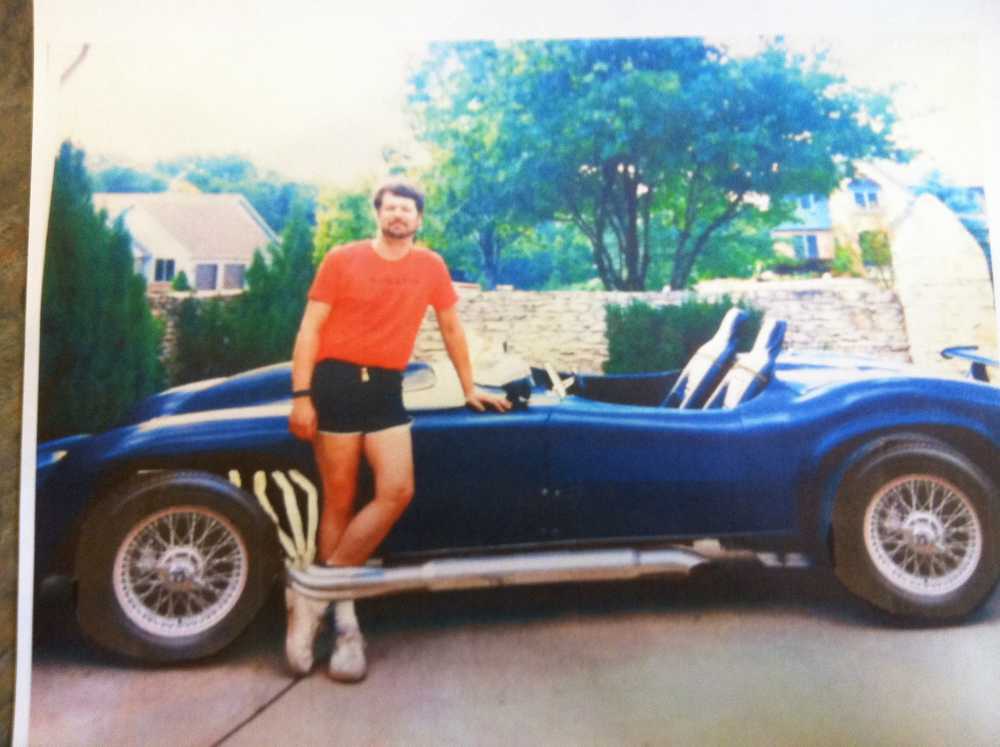 Work is progressing, when my day job allows.

The second car is a more recent acquisition. It’s a Valkyrie GTX, probably from about 1975 or so. I’ve been aware of the car’s existence for a few years. I live out in the country, and the car sat under a tarp a few miles from my house, on a road that connects with the next small town.

I’d pass it once every couple of months, but it wasn’t until the tarp blew off last year that I had any inkling of what it was. I did have a chance to talk to the owner for a few minutes last year, but at that time he wasn’t interested in selling the car. I happen to be driving by this Spring, and he was loading it up on a trailer. 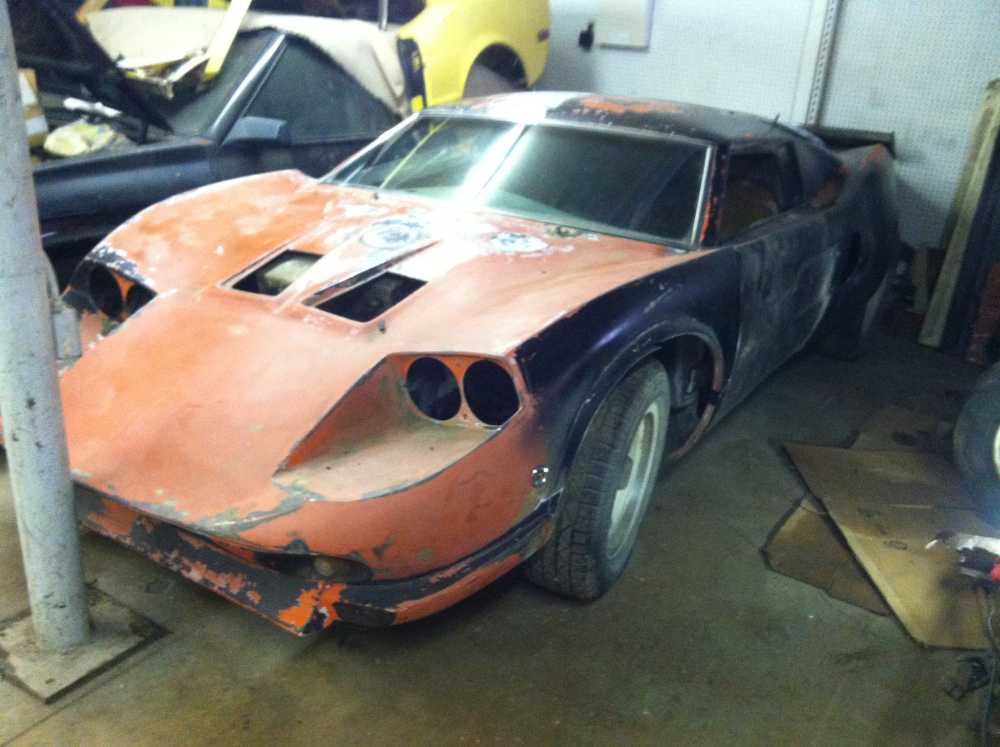 It turns out that he was moving to a different property. Again I asked him if he was interested in selling the car, and this time I was able to purchase it for a very reasonable price, along with a 1966 Corvair as a spare donor car. As it was already on the trailer, he subsequently delivered it to my storage area.

The Valkyrie has a special place in my heart. I grew up in Cleveland in the 1960s and 70s, and, at one point, Fiberfab had one of its headquarters there. Being too young for a driver’s license, and unable to convince our parents to drive us, a friend and I took the buses as far as we could, and hitchhiked and walked the rest of the way to get to the show room, which is where I first saw the car. 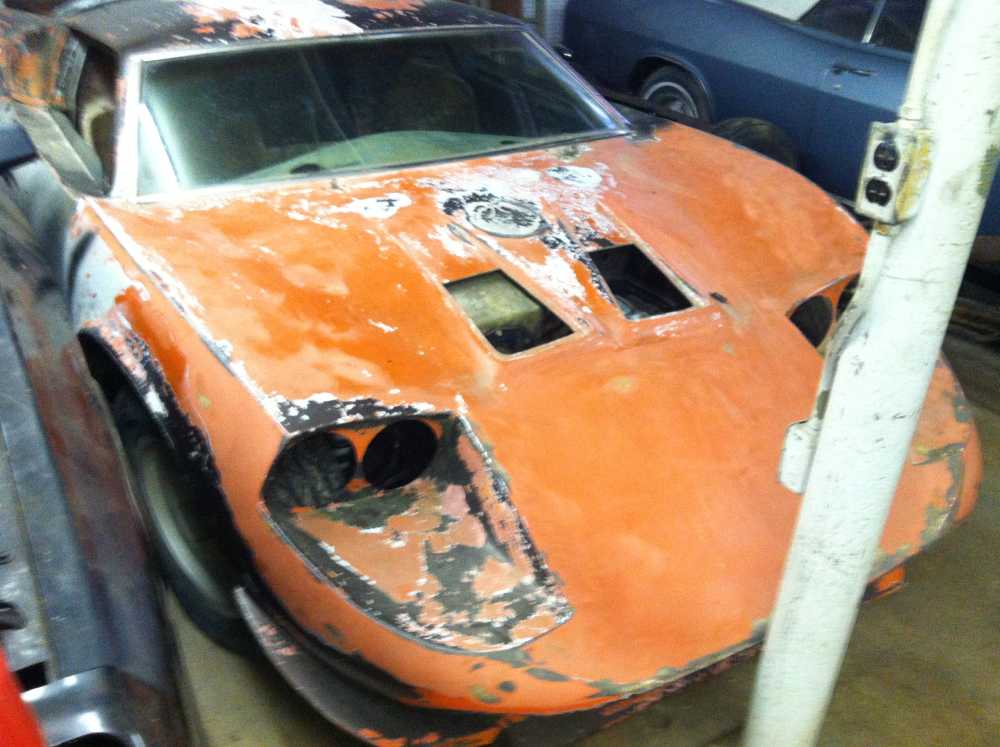 I still have the literature from that visit somewhere. Some people deride the Valkyrie as a poor copy of the GT 40 Ford, but I saw the Valkyrie before I saw the GT 40, and it still quickens my pulse 42 years later. This example is going to need some work before it hits the road again, however. It was a running car about 10 years ago, apparently, originally from Pennsylvania. (By that time, I believe the factory was in Bridgeport Pennsylvania also.).

It was powered by a 1957 283 cubic inch engine out of a Corvette (yes, once again, I have another set of Corvette script valve covers, although the dual four barrel carburetors were discarded along the way.), as well as the typical Corvair transaxle, rear suspension, and steering box. The front, paradoxically, is a Mustang II, although the Corvair parts car would allow conversion back to the original. I did get a chance to discuss restoration issues with some other Valkyrie and Avenger owners at the Carlisle Import and Kit Show, and I’ve been corresponding with one, since that time with regard to specific details. I still have a lot to learn however.

I guess I may stay up a bit late in the evening Barry.  I used to say that nothing fun happened until after 5pm.  But I’m older now, and since I’m in Florida, I’m concerned that our west coast contingent of Forgotten Fiberglass aficionados may not have someone to talk to when contemplating fiber-cars in the evening.

I usually do call it a night somewhere between 2 and 3am east coast time.   I here to help, and glad I could do so 🙂

What a great story Barry, and I appreciate your willingness to share both detail and photos of your sports cars.  And gang…let Barry know what you think – post your comments below concerning his cars and share your thoughts on the changes that he could consider making.  The more interaction we have with each story – the better and stronger the fiber-community, and the better end result they’ll be with finished cars.

Both of Barry’s cars are excellent and I look forward to seeing each on the road, at shows, and/or both.  I wish you the best of success Barry and be sure to keep us posted with your progress.