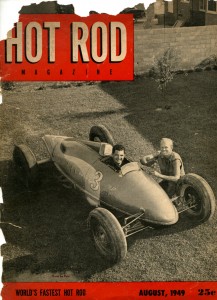 Here Burke and Francisco Appear On The Cover of Hot Rod Magazine in August, 1949.

The more magazines I collect, the more information I find.

Sometimes the best stuff doesn’t appear in the main articles.  Instead, it often appears in often overlooked places at the back of the magazines.  That’s exactly what I found recently in the column titled “Hot Rods & Ends” by Gene Jaderquist and Griff Borgeson that appeared in Cars Magazine in September 1953.

In their column that month, they featured how “hot rods” and “sports cars” were coming together in design and performance.  And a bit of history too.  They also covered achievements, actions, and thoughts of Chuck Potvin, Ray Brown, Don Francisco, and most importantly….Bill Burke.

In this article, they reviewed Burke’s history as well as his accomplishments in building belly tank and fiberglass sports cars.  It’s pretty cool gang.

Let’s see what Bill Burke had to share back in September 1953 about this topic:

Hot rodding is the practice of getting better-than-stock performance by modifying production car components, also proving the efficiency of the modifications in competition.  Since 99 percent of hot-rod competition takes place on straightaway courses and since the true hot rodder is always looking for a new technical challenge, it was to be expected that the sports car and hot rod movements would eventually blend together.  It can be said with certainty that the process has begun.

Bill Burke, now in his 30s, has been a leader in the hot rod movement since he build his first roadster in ’34.  He was serving in the Coast Guard in ’43 when he saw a barge-load of aircraft wing tanks for the first time.  “What a crazy body for a streamliner” he said as he climbed aboard, steel tape in hand, and found the dimensions perfect.

Out of the service in ’46, he cruised war surplus junkyards until he found one of those tanks and carried out his invention of the belly-tank hot rod.  Burke was the first man to achieve 160 mph at the lakes.  He was also a pioneer in small-displacement Class O and in fiberglass body construction.

Burke looked on sports cars with an appreciated eye about a year and a half ago.  He bought an MG TC and, to get the kicks to which he was accustomed, slipped a hot V8 “60” engine between the rails.  Then his employer acquired a Cisitalia coupe – a tiny, admirably streamlined car.  Burke blandly went to work and made a mold of the entire Cissy body.  Now he sells fiberglass Cisitalia bodies on the side. 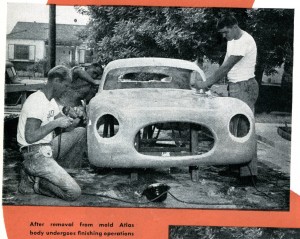 Here Burke is Shown With Mickey Thompson in the February 1953 Issue of Modern Plastics Magazine.

Burke has mounted one of these bodies on his TC V8 “60” which he plans to enter in all possible sports car races this season.  Next, he’s building a chassis of chrome-moly tubing to receive one of his plastic bodies and a Chrysler V8 engine.  If the car will still handle well with all that engine weight, he’ll race it, too.

Then, he plans to run for international sports car records.  The car will be the chrome-moly Cissy, powered by Clark and TeBow’s record-holding Ardun V8.  When last on the dyno, the Ardun was pulling 330 hp.  It propelled a heavy, stock-bodies roadster to a 164 mph record.  Burke’s car, with the Ardun installed, will weigh around 1950 lbs.  Watch him; he represents the vanguard of hot rod thought.

Don Francisco is the country’s top authority on hot rod engines.  He has branched out into sports cars and is running Major Skip Swartly’s Olds J2X Allard this season.  “The field’s wide open,” says Cisco.  “Everybody is just learning to make sports cars go.  With a little know-how you can get in there and have a lot of fun.”

Chuck Potvin, camshaft and ignition specialist, is hoarding his gold for a reason.  He isn’t even going to Bonneville.  “My plans are for the Mexican Race,” he says.  “I’m going to watch every mile of it this year, and have a sports-class entry next year.”

Ray Brown, proprietor of Ray Brown Automotive, is one of the more brilliant speed wizards in the hot rod movement, a past president of the Southern California Timing Association and a holder of many records.  In addition to his Hollywood plant, Brown now owns an MG and Jaguar agency, plus a speed shop in oil-rich Midland, Texas.

Last May, Brown acquired the XK120-C driven by Fred Wacker at Pebble Beach.  Brown plans to race the car throughout the season.  It will be instructive to see if his tuning results in a better-than-average-running “C.”  He is no longer active on the dry lakes, takes some interest in the drags, is all-out for Bonneville, international records, and sports cars.  “Mexico is driving us all crazy,” Brown says.  “If I can possibly make it I’ll be there, with a Chrysler V8 in a Kurtis coupe.”

Another Great Shot of Burke and Thompson From the ’53 Issue of Modern Plastics.

Traditional hot rod activity – lakes and drag meets – goes on as usual.  It’s the training ground that gives us many of our best championship drivers and mechanics.  It produces men and machines that challenge Detroit, shatter fabulous international speed records and enrich with American gifts the self-consciously foreign sport of automobile road racing.

This article really captures the bare essence of building your own sports car and driving it to fame and fortune.

Bill Burke did it with the Allied sports car.  And Ray Brown teamed up with Denny Larsen and built the Victress Guy Mabee Special.  Even Chuck Potvin teamed up with Shorty Post and built another legendary Glasspar G2 race car that you’ll hear about soon here at Forgotten Fiberglass.

The year “1953” was certainly the golden age of fiberglass and building your own sports car.  And our favorite “Forgotten Fiberglass” sports car companies were smack dab in the middle of this era – when all things were possible. 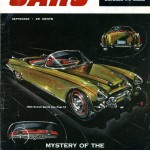 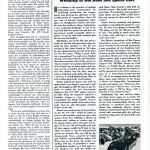 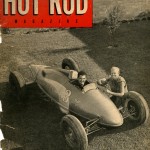 Here Burke and Francisco Appear On The Cover of Hot Rod Magazine in August, 1949. 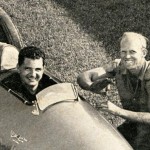 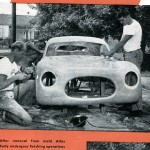 Here Burke is Shown With Mickey Thompson in the February 1953 Issue of Modern Plastics Magazine. 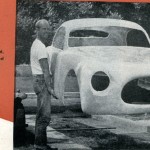 Another Great Shot of Burke and Thompson From the ’53 Issue of Modern Plastics. 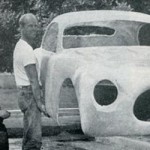