We’ve come to a point at Forgotten Fiberglass where we need to step back and answer some larger more analytical questions.   Recent contributions to the website by Joel Driskill and Rick Feibusch have provided excellent food for thought, and it was those and other articles that crystalized Guy Dirkin’s thoughts on issues and ideas that we’ve been debating for some time.

Guy responded with his initial thoughts to Joel’s article on Chuck Manning with an extended comment which many of you responded to.  Today’s article is Guy’s extended thoughts on this issue with many of his initial points discussed in greater detail.

All of this activity has led to two additional features on our Forgotten Fiberglass website – all oriented around articles that contribute to the analysis and discussion of key issues of building your own sports car in the 1950s:

So, let’s have at it gang.  Checkout Guy Dirkin’s thoughts below and add your comments after the story. 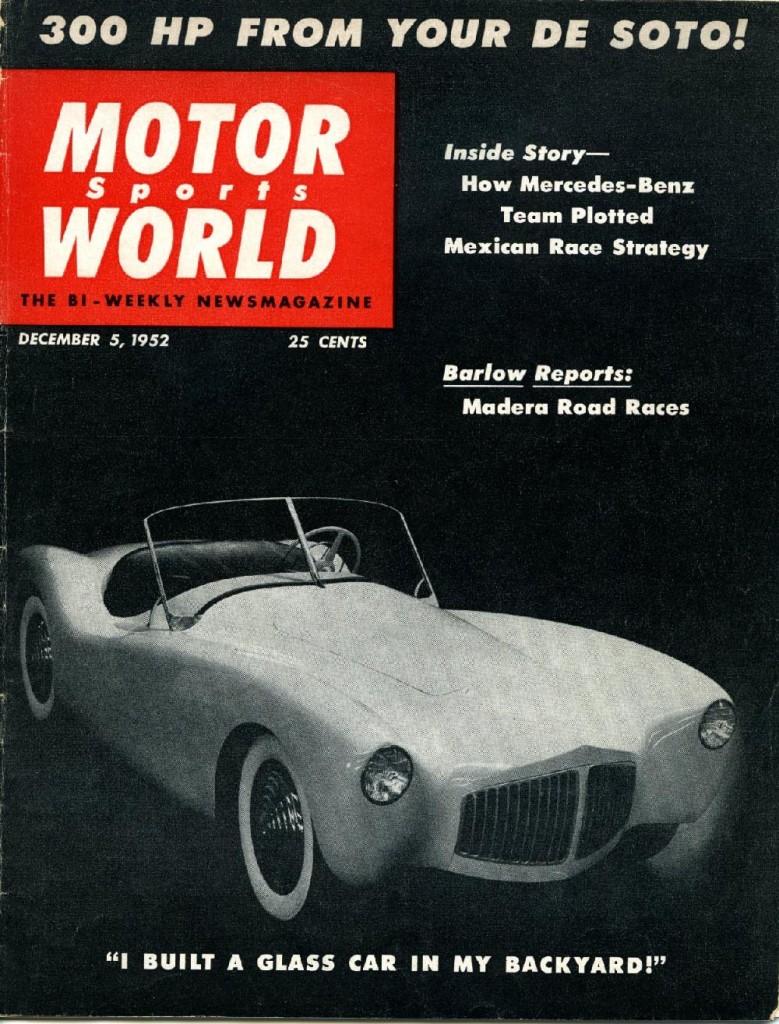 Fiberglass cars have been forgotten, passed over, shunned, and ridiculed by many who profess an interest in cars.  In reality, low production and one off specials had a ripple effect on the automotive world and have been forgotten largely because there has been little information to explain there importance.  Once explained, their importance is justifiable.

The evolution of the Forgotten Fiberglass web site has provided structure to the builders of American post-war sports cars:  one, “one off”, at a time.  The ability to look back over 60 years and gather difficult to find, single pieces of a mosaic, and start to assemble an important missing picture of American sports car development is tedious, hard, manual labor.  Frankly that is why it has not been done before: adequately anyway.

The early fiberglass bodied American Sports cars have caught the attention of key influencers in the automotive milieu.  Established automotive historians, designers and design school faculty, as well as top concour show promoters fully comprehend the impact these cars had in their day, as well as their presence and place amongst the modern day collector car scene.  They get the focus of Forgotten Fiberglass’ contribution to automotive history at large.  Early American sports cars that practically no one has heard of are getting “hot”. 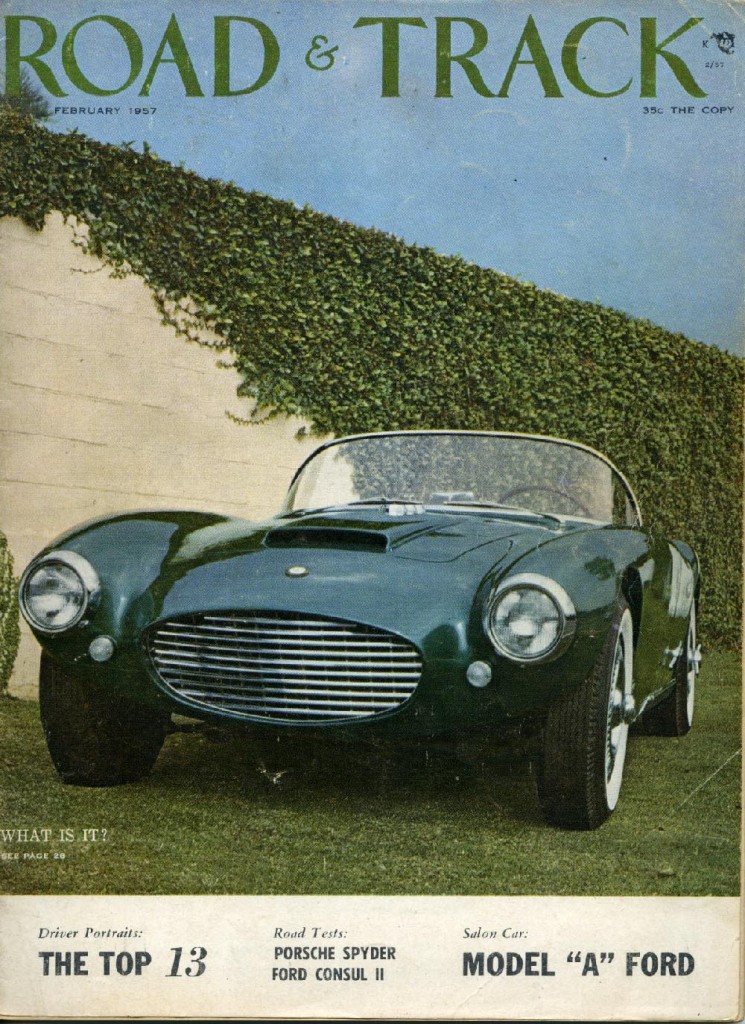 However, the vast majority of car enthusiasts have given no thought, or at best minimal thought, to the origins of the American sportscar.  When it comes to the fiberglass segment, fiberglass cars are kit cars, right?  Badly made, right?  Goofy, right?  To move the needle on the guy at the center of American car culture will be very hard and take many years.

The Forgotten Fiberglass web site is built on facts.  Facts are the only secure way to change the needles set point.  The blog capabilities following a posting allow all to input in real time.  Thoughtful input can be captured immediately.  If a book had been written on this subject, input may influence the second edition, published maybe ten or twenty years later.  The forgotten fiberglass web site is the way historical research has to be done now.  Nearly all other options are far less productive.

Recently a little know publication by Chuck Manning called “Manning Competition Car” has emerged and was posted on the Forgotten Fiberglass website.  It was written in the mid-1950.  Click here to review the Chuck Manning publication and associated comments.  While it is difficult to piece together the mosaic described above, when you are living in the era of interest it is much harder.  It will be much easier to determine the cause and consequences of the global financial crisis, circa first decade of the 21st century, sixty years from now, then it is to do so now. 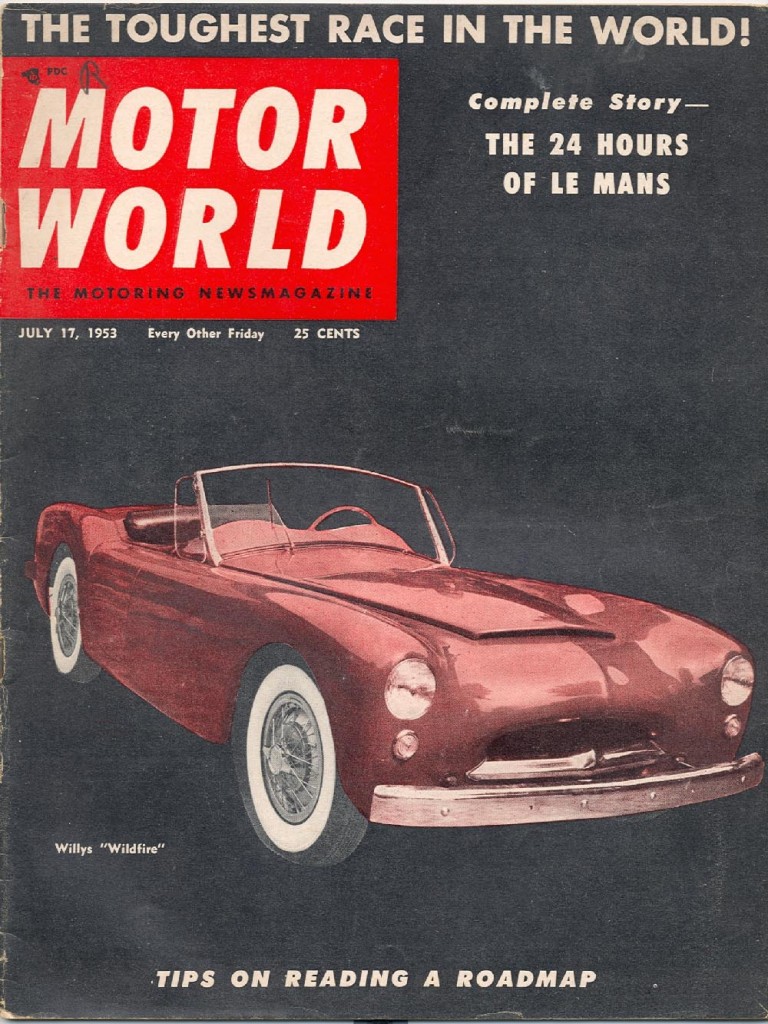 Chuck Manning did a good job describing the basics of building a sportscar in his publication.  But he also spoke to several critical variables that we are today looking to define more acutely.  Let’s take a look at several key points put forward by Manning in the 1950’s.  They are very helpful in furthering our understanding of the American Sportscar evolution.

Demand for affordable American sports cars. The market for sports cars in the United States was probably less than 500,000 “would be” buyers and certainly less that 100,000 “actual” buyers.  A large manufacturer would not be interested in building low production sports cars and specialty cars for such a small total market.

Even if a large manufacturer captured 25% of the sportscar market, the total sales for the year would not equal 2-3 days worth of total assembled units.  From Manning’s perspective, 100-200 cars per year would be a huge success.  There was a demand, but the market was small – even if it was filled with enthusiasts. 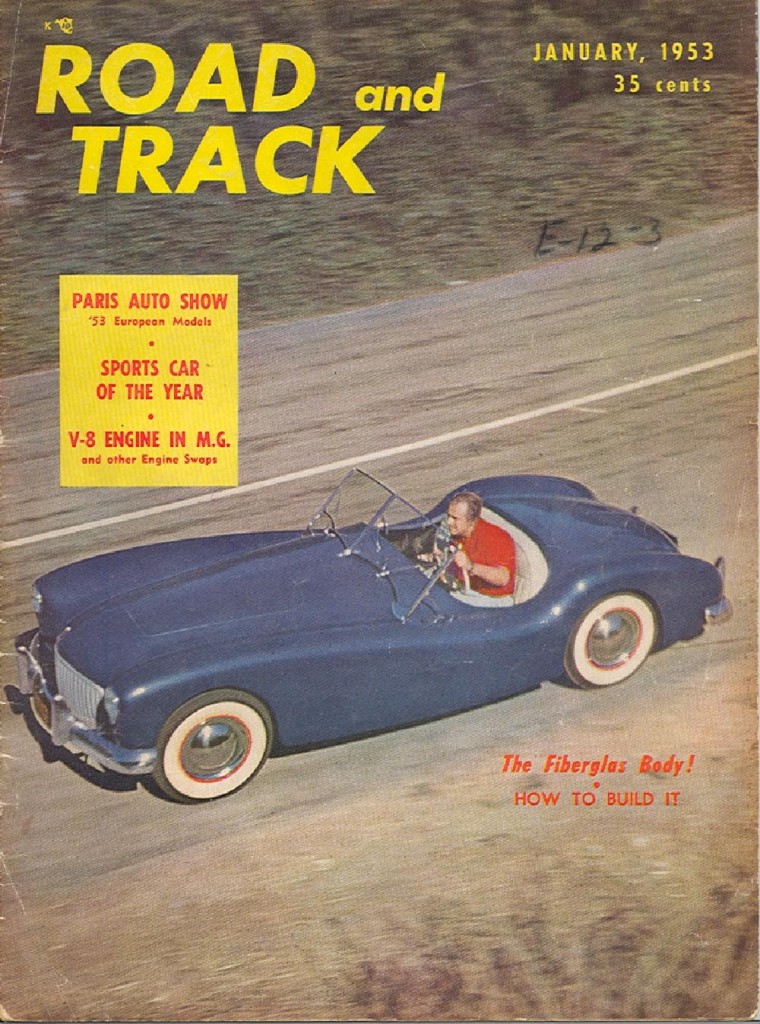 * Second, he provides the logic of using a composite body in sportscar and race car building.

Composite bodies still dominate small production race and sportscar building today.  Composite materials are relatively cheap, easy to shape and easy to repair.  Composites are so logical for small production cars:  composites should not be viewed as a low quality option but the only option, in my opinion.

* Third, he realistically says if you’re going to cost effectively build a small production car you have to use readily available chassis and components from major car manufacturers.

Successful manufacturers of small product sports cars have taken this route for years.  The rear wheels and tires of an American sportscar special do not know if rotational force is supplied by Detroit or Maranello!

* Fourth, Manning goes on to discuss concepts of frame construction, front and rear suspension and brakes.  This introduces an important issue: “building constructs”.

He talks about “constructs” because he recognized that builders were not building kits.  His in-period writing is to sports and race car builders who had to figure out..well, everything about building a car.  Developed kits were still 5-10 years away. 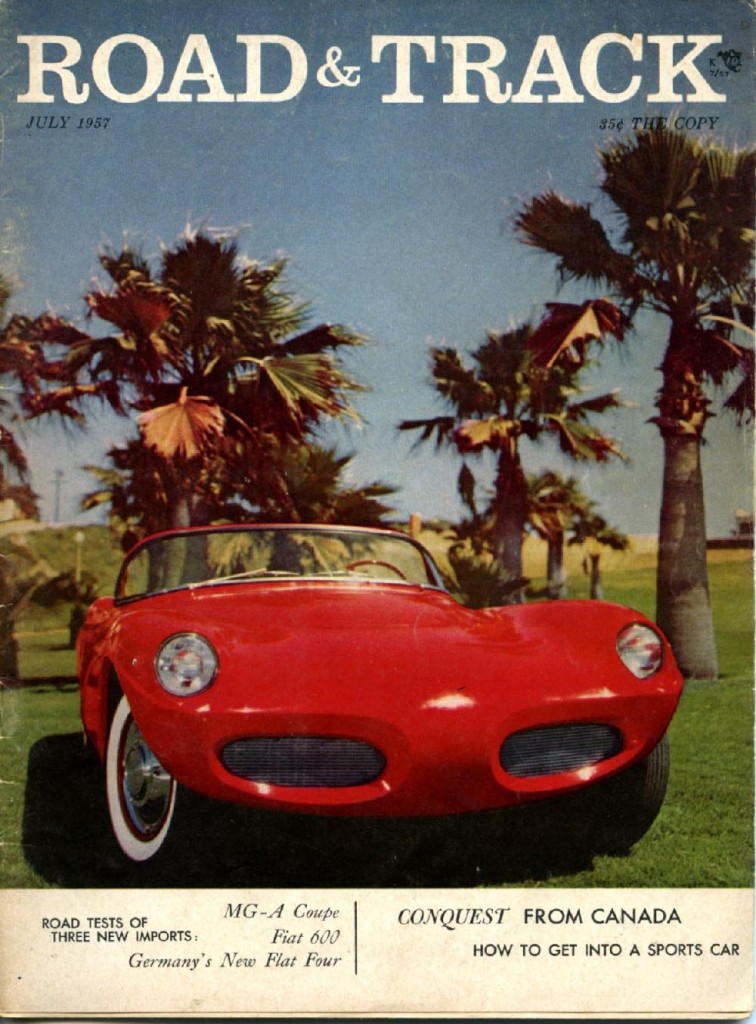 The Manning publication is an important insight that summarizes what was actually happening in the 1950’s and why.  Now, sixty years later, we are piecing together the context with the advantage of hind sight.  There are a number of variables that have caused early fiberglass bodied cars to be “forgotten”.  To summarize them all is not the goal here. The recognition of the points offered by Chuck Manning is part of the explanation of why American Sportscars were built, the demand for them, and the solutions to the choices of parts and bodies.

The Manning publication contributes to our understanding of why cars were built the way they were in the early to mid 1950s.  Other period writings help explain the ripple effect of the small manufacturers on the automotive world.

But that will have to wait for another day.

The Forgotten Fiberglass story is a collaborative effort, and each time you post your thoughts, your “word” is captured for all to review and consider.   Your contributions will also impact the design, structure, and detail that will ultimately be captured in a book documenting the era and men of Forgotten Fiberglass.

So if you have comments gang… post them below.  Everyone here at Forgotten Fiberglass (including future generations) benefit each and every time you do so. 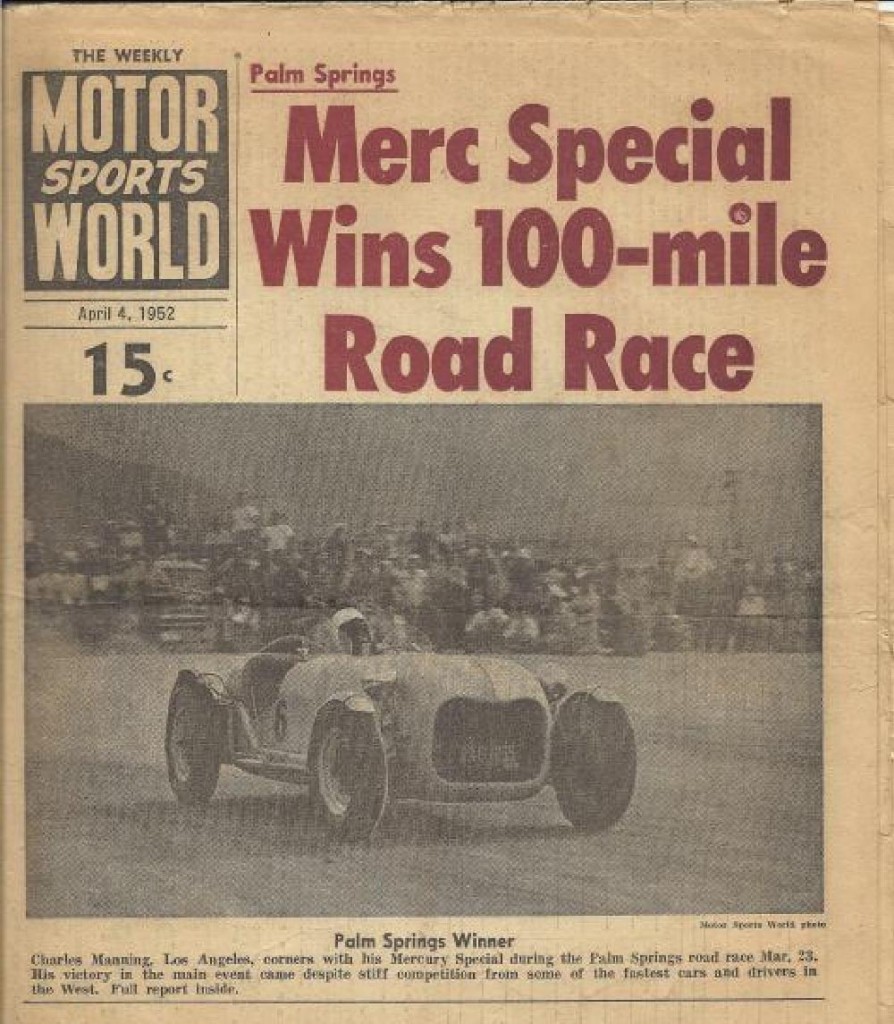