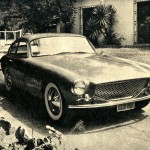 What A Striking Design Merrill Powell Created. Griffith Borgeson Thought Jerry’s Car Looked Like A $20,000 Machine – And That Was Back in 1959. Way To Go Merrill and Jerry!

I first wrote about Jerry Sutton’s Victress C3 coupe back in January of this year.  I had located a short article that appeared in the July 1960 edition of Hot Rod, and Jerry’s ride (Victress C3) looked to be one cool car.  Here’s a link to that story:

Looking a bit further, I found another article that appeared a bit earlier in a Fawcett booklet in 1959.  This 1959 article is today’s feature story.

However….I’m pleased to say that this will not be the only article about Sutton’s Victress.  The more I read about Jerry’s car, the more I became interested in tracking down the man and his machine.  There had to be much more to the story on how Jerry built his car, and why he did so too.  And that’s just what I’ve done.  With a bit of work, I located Jerry and he’s in great health.  Jerry agreed to sit down with me to do a series of interviews on his car and how it was built.  I’ll reveal the results of our talks in a future article on our Forgotten Fiberglass website.

For now, let’s take a look at what Griffith Borgeson had to say about Sutton’s Victress back in 1959.  And….while you’re reading the article below, be sure to take notice of the kind words and biography that Borgeson did on the designer of the Victress C3 – Merrill Powell.  When I shared the story below with Merrill, he got quite a kick out of it.  This was the first time he had seen the article in over 50 years.

I’m sure you’ll enjoy the story below about Merrill, Jerry, and the famous Victress C3 that was built. 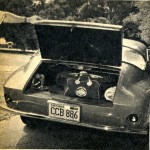 Victress C3 Coupes Did Not Come With A Trunk. Jerry Had To Cut The Lid And Fabricate Every Last Piece To Make This Rear Compartment A Reality. By The Way – That’s a Fisher Body Craftsman’s Guild Handbag In The Trunk.

“Victress of North Hollywood, California, a manufacturer of special and production fiberglass bodies for the last five years, has a reputation for craftsman-like, original work.  But the car pictured here ought to add another adjective to the list: miraculous.  This car, incredibly enough, is based on a budget body that sells for $395!

The body was designed by Victress’ Merrill Powell, a graduate in psychology who spent four years working as a medical administrative officer in the USAF and who eventually decided to get out of “wig-straightening” as a profession.  He really got way out!  After just one semester at Art Center School, he was earning his living exploiting what is obviously a tremendous native talent for design.

The low-cost body he designed for Victress eliminates as many special components as possible.  Headlights, grille, windshield, rear window, etc., are all stock out of various automobiles.  For this inexpensive body, Victress sends buyers a set of templates on how to make the doors worked out for ’50 Ford components in the hinges and latches.  All this, of course, is in the interest of economy.

When Jerry Sutton of Manhattan Beach bought the body, however, his prime interest was not its cost but its shape.  It fitted a chassis that he had built up out of a wrecked Ford.  Twenty-three year old Sutton, a graduate mechanical engineer who has won two Fisher Body Craftsmen’s Guild scholarships for design, didn’t skimp in time, talent, or money when he built up his car. 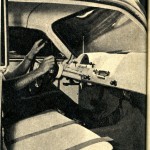 Victress Did Not Provide A Dashboard For The C3 Coupe (Les Dawes of LaDawri Later Did). Here You Can See Sutton’s Handiwork At Creating A Custom Dash For His Victress C3.

Seven months and $1500 after he’d started with the wrecked chassis he had the beautiful machine pictured here.  Sutton’s car runs a ’54 232 cubic inch Ford mill which is, he says, “very economical and has all the suds I need.”  The transmission is Fordomatic.

Most of the body components are stock: windshield is from a ’53 Plymouth sedan, rear window is from the same car, inverted; taillights are ’53 Pontiac; the hand-made looking grille is cut down from a ’58 Ford.  The bumpers were formed from a 2 inch water pipe on a pipe-bending machine; the ends were plugged and welded, and Sutton hand-filed them and had them chromed.

Sutton cut the Ford chassis to a 97” wheelbase by putting a step in the frame that took off 21 inches and set the engine back 20 inches for better weight distribution.  He took a couple of coils off the front springs, moved the rear springs outboard and raised them to lower the chassis, achieving a better, flatter ride.

The paint is ’56 Corvette Venetian red.  Sutton used several primer coats, filled the rough spots, used four coats of the red and then covered them with several coats of clear lacquer.  The window trim is all hand made from aluminum extrusions of the kind that’s used for trimming table tops.

The result is a car that does immense credit to both Sutton and Victress.  Between them, they’ve put together a budget priced car that looks like a million.”

As I mentioned above, we’ll have more to share about this car directly from interviews conducted with Jerry Sutton earlier this year. 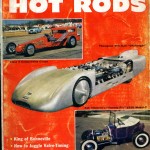 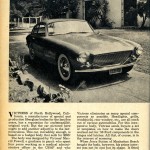 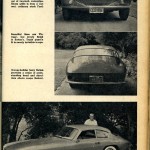 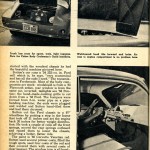 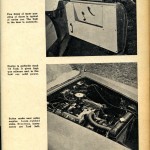 What A Striking Design Merrill Powell Created. Griffith Borgeson Thought Jerry’s Car Looked Like A $20,000 Machine – And That Was Back in 1959. Way To Go Merrill and Jerry! 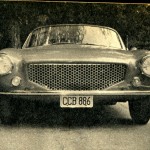 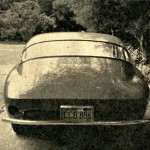 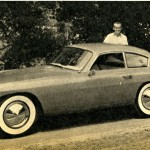 Victress C3 Coupes Did Not Come With A Trunk. Jerry Had To Cut The Lid And Fabricate Every Last Piece To Make This Rear Compartment A Reality. By The Way – That’s a Fisher Body Craftsman’s Guild Handbag In The Trunk. 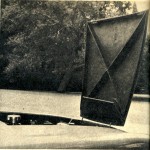 Victress Did Not Provide A Dashboard For The C3 Coupe (Les Dawes of LaDawri Later Did). Here You Can See Sutton’s Handiwork At Creating A Custom Dash For His Victress C3. 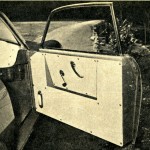 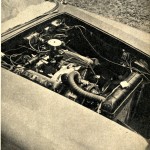 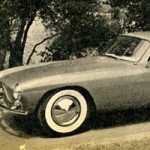