Fiberfab Introduced the Centurion in 1964

I first heard from Joseph Aufenanger back in April of this year – and I was immediately jealous.  He had found and purchased a Fiberfab Centurion body.  These are one of my favorite bodies of the 1960s and several friends of mine have built these over the years including Dennis Kazmerowski and Wes Abendroth.

I asked Joe if he would be willing to share the restoration of his Centurion as he begins his “build” and he kindly agreed.  I also asked Joe to put together some of his background information so that we can learn more about he man behind the job.  Let’s start with Joe’s background. 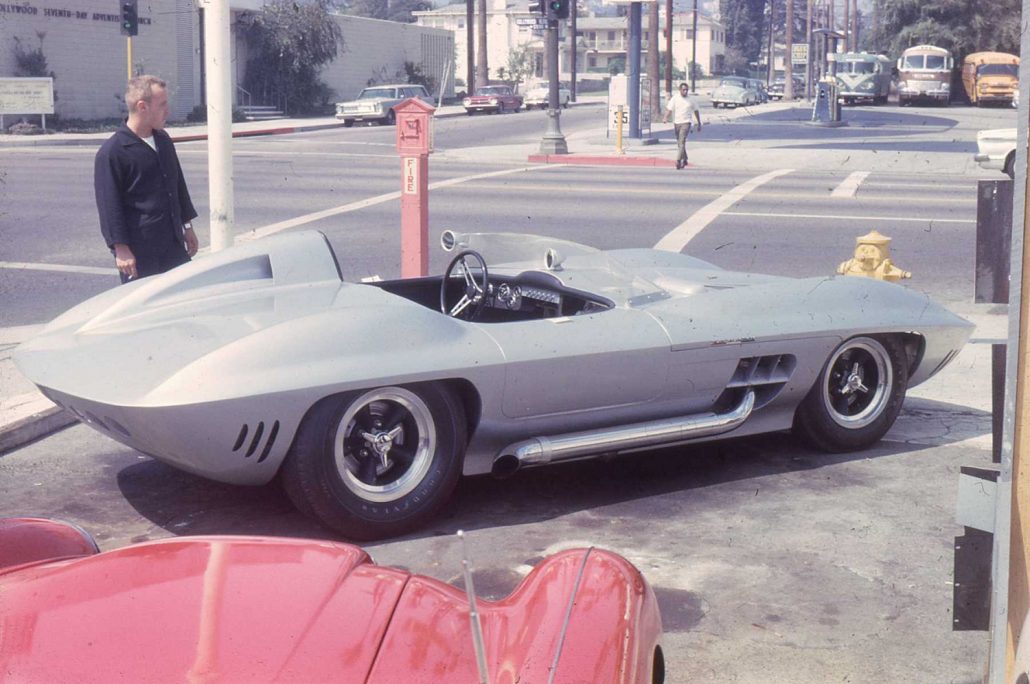 Joseph Aufenanger – In His Own Words

I am a lifelong gearhead, and have always been interested in building things, particularly cars. After high school, I earned a Bachelor of Science degree in Mechanical Engineering. I started my engineering career at Pratt and Whitney Aircraft in East Hartford Connecticut  and earned an MBA at Western New England University.

I have always tinkered around high performance cars, building a 1941 Chevy powered 41 Ford street rod while in college and purchasing a 1968 AMX shortly after college graduation. Other restoration projects included a 1957 Nomad and a 73 Mustang convertible.

In 1982 I moved from Connecticut to Florida to start my own business selling Power and Air Conditioning products to the Data Center market. Since “life” sometimes gets in the way, I sold my Nomad and AMX and took a hiatus from automobiles to grow the business and raise three kids. In Florida, boating was what the family wanted to do, so it replaced cars for a while.

Along the way, I got a Florida Contractor’s license and spent a few years (part time) remodeling a partially completed house for my family and then razing an older home and building a new one. Our new home fortunately included a large 3 bay garage, which I thought would be sufficient for me to pursue some builds. After the last of my three kids all got out of college, I decided to get back to my real passion and build a Factory Five Daytona Coupe at the tender age of 69.

Upon its completion last year, boredom set me on the path of pursuing another project and I stumbled on the Centurion body for sale on Ebay. After doing some research, I found both the Fiberfab and the XP 87 stories fascinating and decided this would be a great pursuit. Ironically, Pete Brock was one of the main players in both the Daytona Coupe and the XP 87.

I am fortunate to be happily married to my college sweetheart, Barbara, whom appreciates and respects my passion for cars and will often lend a hand in the garage when my two hands are not quite enough. As I recently celebrated my 75th birthday, some people express surprise that I would start another project, but I enjoy being busy working with my hands. I will likely sub out a few tasks that a younger person might take on themselves. My wife has observed that she hears a little more groaning in the garage than in years gone past.  I still work full time, so this is a part time project, however, I will keep you posted on my progress.

The Fiberfab Centurion was a design closely based on Bill Mitchell’s 1959 Stingray race car.  In theory it was supposed to easily fit a Corvette C1 or C2 chassis (1953 to 1962) but you’ll soon learn different.  Few of these bodies were built, but in the last many years we’ve found nearly 10 bodies / finished Centurions.  Check out the Fiberfab catalog cover and Centurion page below for more information. 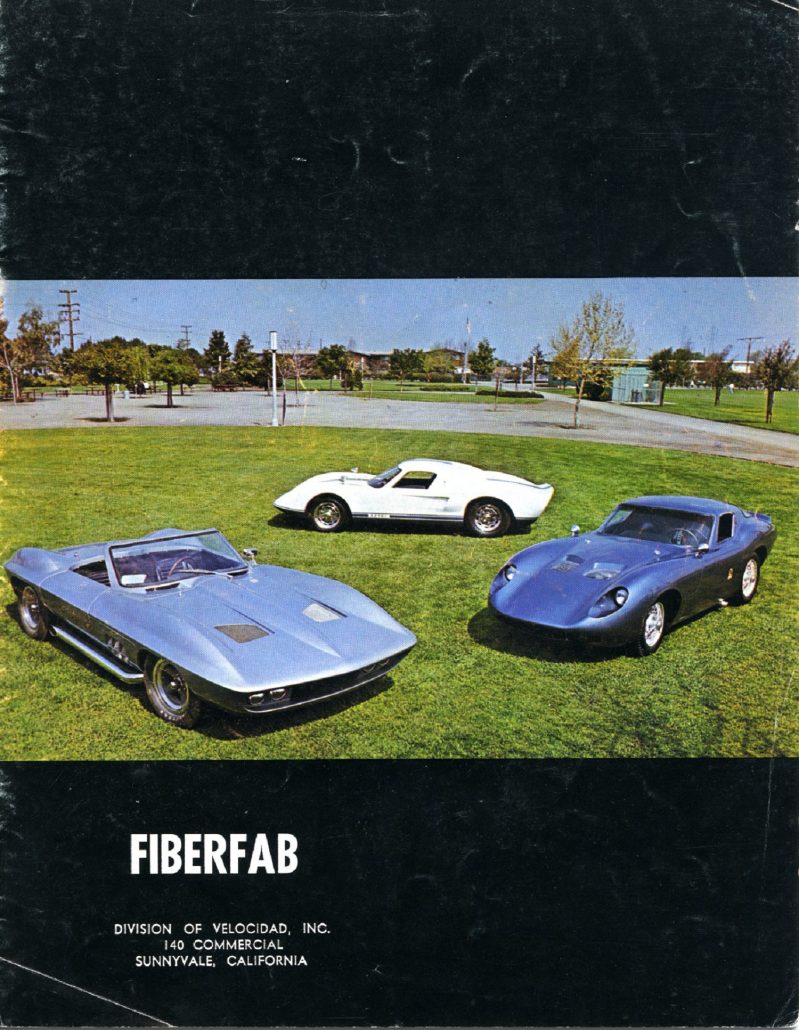 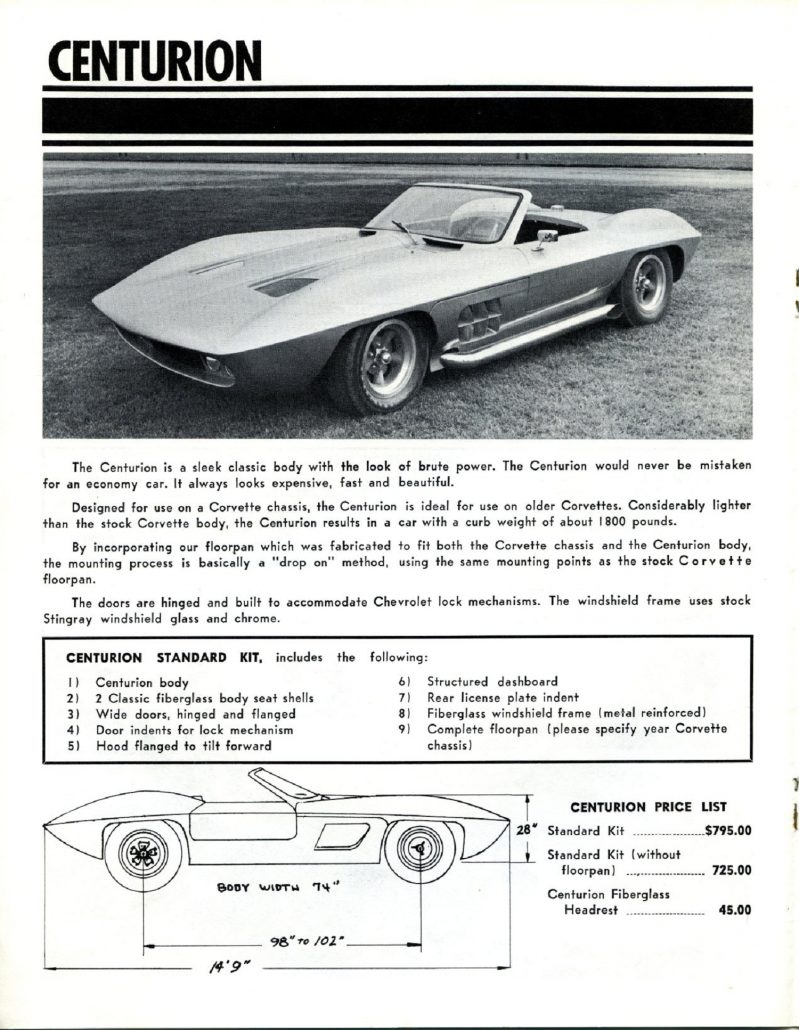 Here’s what Joe shared with me back in April of this year:

I have discovered your website and find it fascinating. I recently purchased a Fiberfab Centurion (XP 87 replica) and was wondering if I could bother you with a few questions.  It is the body only, no chassis floor pan. My intention is to duplicate the XP 87 #11 car raced by Dr. Dick Thompson.

Since the Centurion was intended for a Corvette 98-102″ wheelbase, a C-1, C-2 or C-3 Corvette chassis would work. I am leaning towards a C-3 to take advantage of the more sophisticated suspension. I know that the #11 car had various engine configurations during it’s life (327,350 and even a rumored big block).

Would you recommend a preference for a choice? If I were a younger man I might seek to have a mold made but not sure I have the time for that kind of a Venture. I would be happy to call you if you prefer. Thanks in advance for any assistance or advice you can provide.

Here are the photos that Joe included: 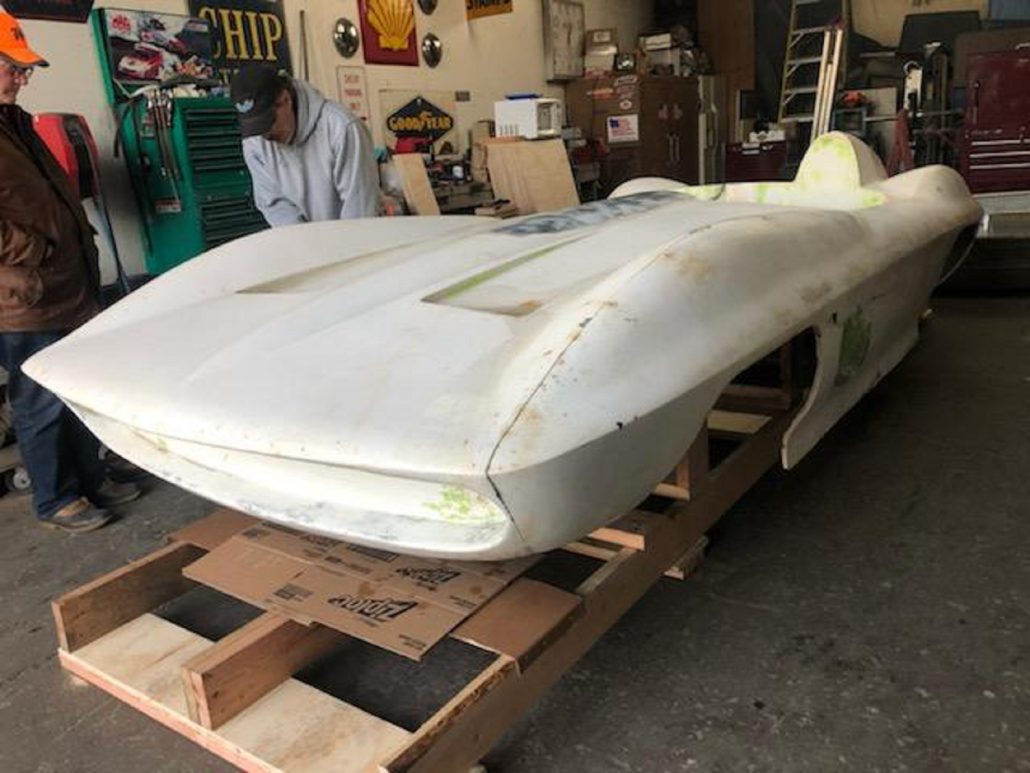 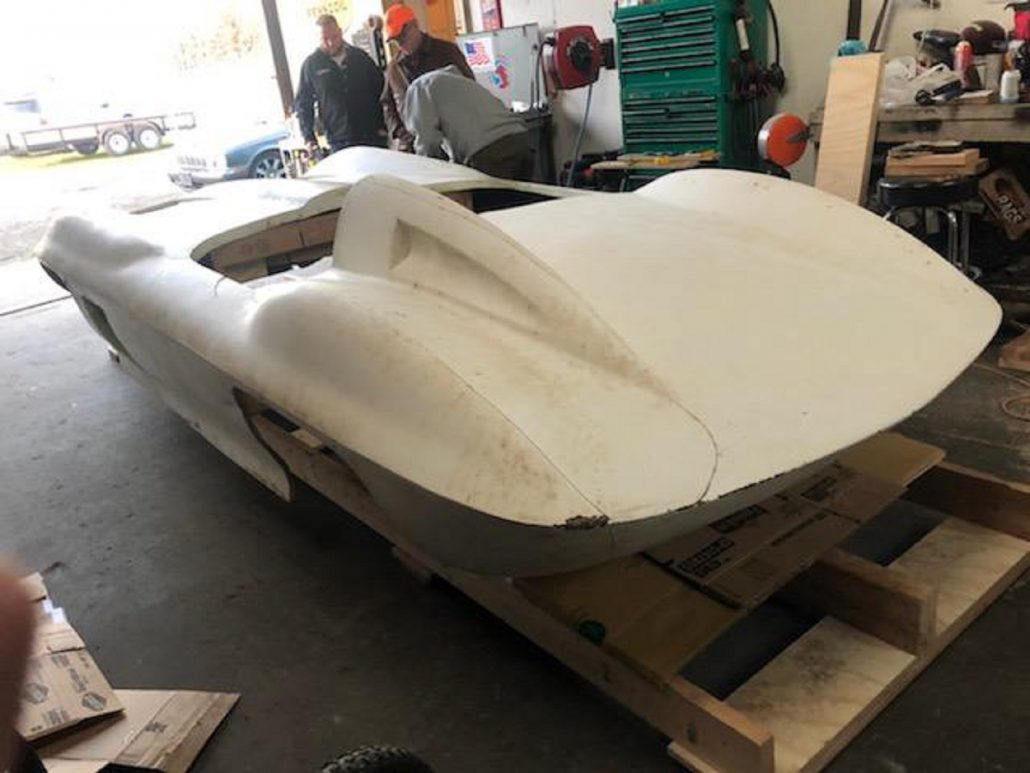 Joe and I talked by phone and I recommended that he talk to our good friend Dennis Kazmerowski.  Dennis has built several Centurions over the years including his first one that was built in the 1960s – very cool.  Dennis has also built more exotic cars including several race cars.  He’s a great friend and wonderful resource for those that enjoy Undiscovered Classic Cars.  Dennis was able to help Joe with his questions and the build of the Centurion began.

I next heard from Joe earlier this week:

Well, the project is getting underway. I have recently purchased a Big block (427) C-3 chassis, complete with engine, transmission and driveline. I plan to keep it a numbers matching rolling chassis for this project. After placing the body on the chassis, I confirmed that the 99″ wheelbase need to be “stretched” 2.5″ for the wheels to be centered in the wheel wells. That somewhat contradicts the old Fiberfab claim that the body is compatible with both the C-1 chassis (102″ W.B.) and the C-2 chassis (same as the C-3 at 98″).

Since the Fiberfab I purchased is a one piece body only, I will need to fabricate a center “tub” (aluminum to minimize weight) to be able to define body mounting points. This will enable me to position and “stiffen” the body prior to cutting doors and front/rear tilt up sections. I will be seeking some help from a Fiberglass specialist shortly, and hope south Florida’s boat building population might yield some help.

As discussed in the past, if I were a younger man, I would seriously consider making a mold of my body, but a new business endeavor is likely not in the cards. I now have the body back on the trailer and will complete the “tub” fabrication, then on to extend the chassis and rebuild all the components including the engine. I have attached a few photos for you.

Thanks again for your contributions to this automotive niche.

Let’s check out the photos sent in by Joe: 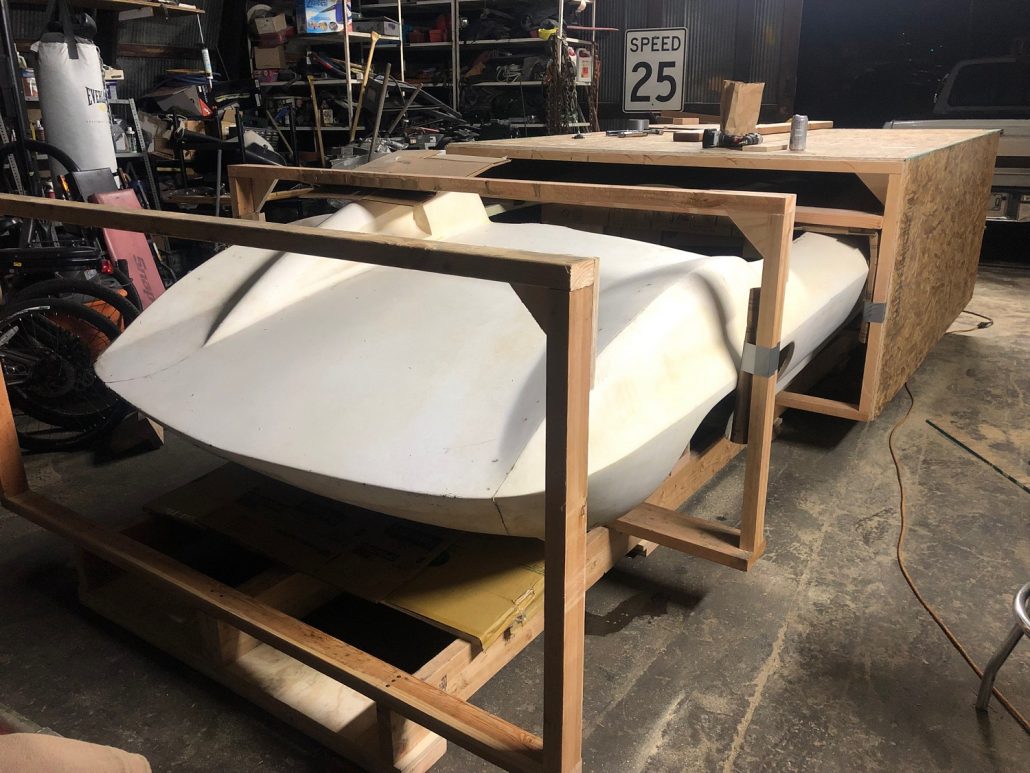 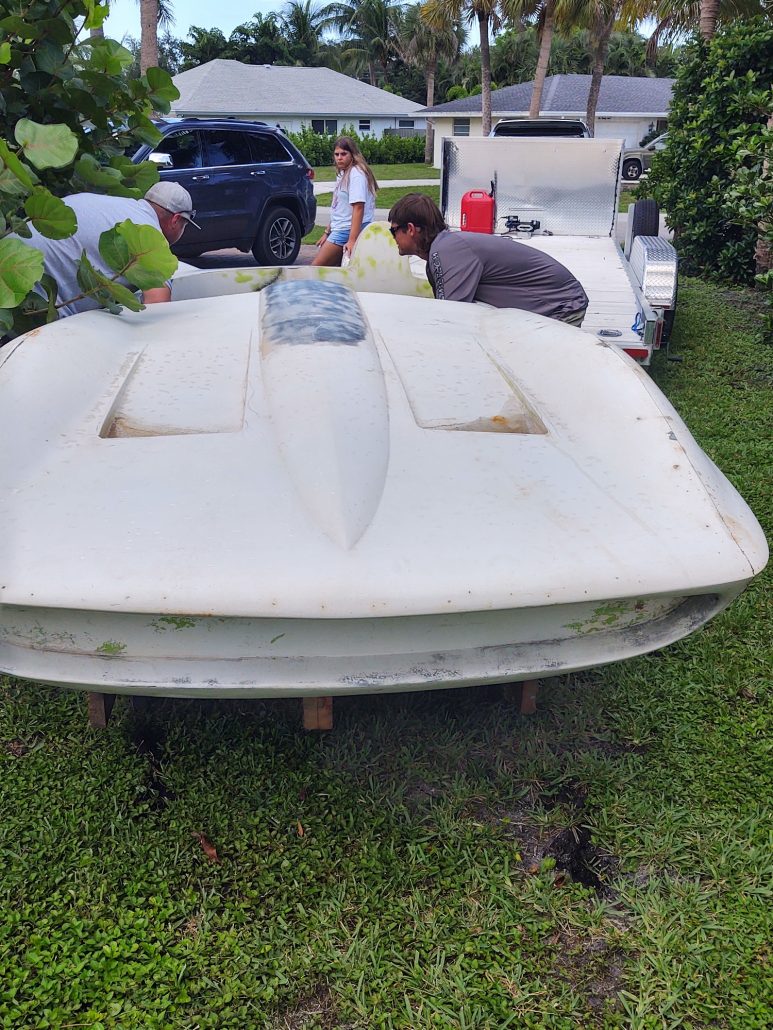 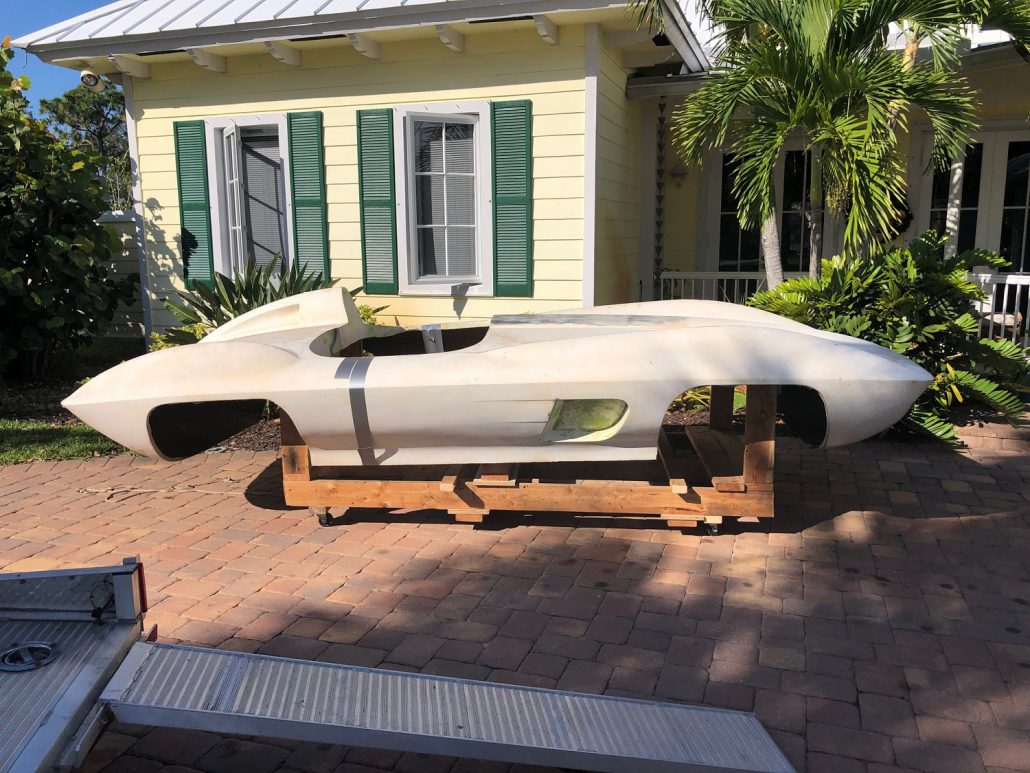 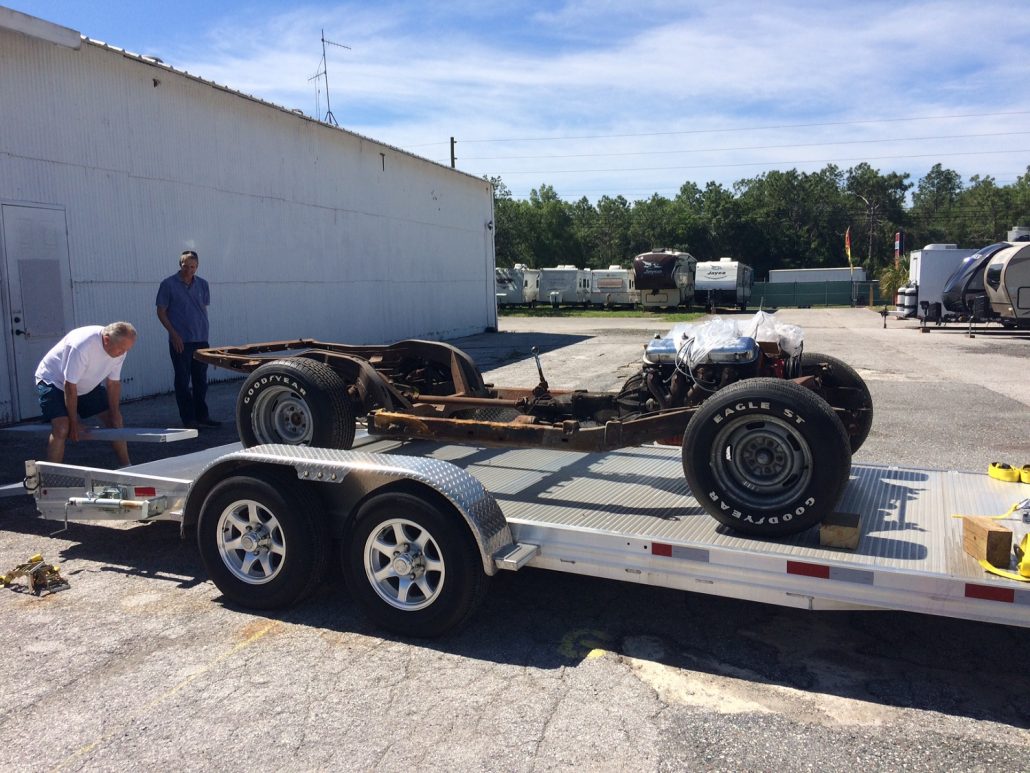 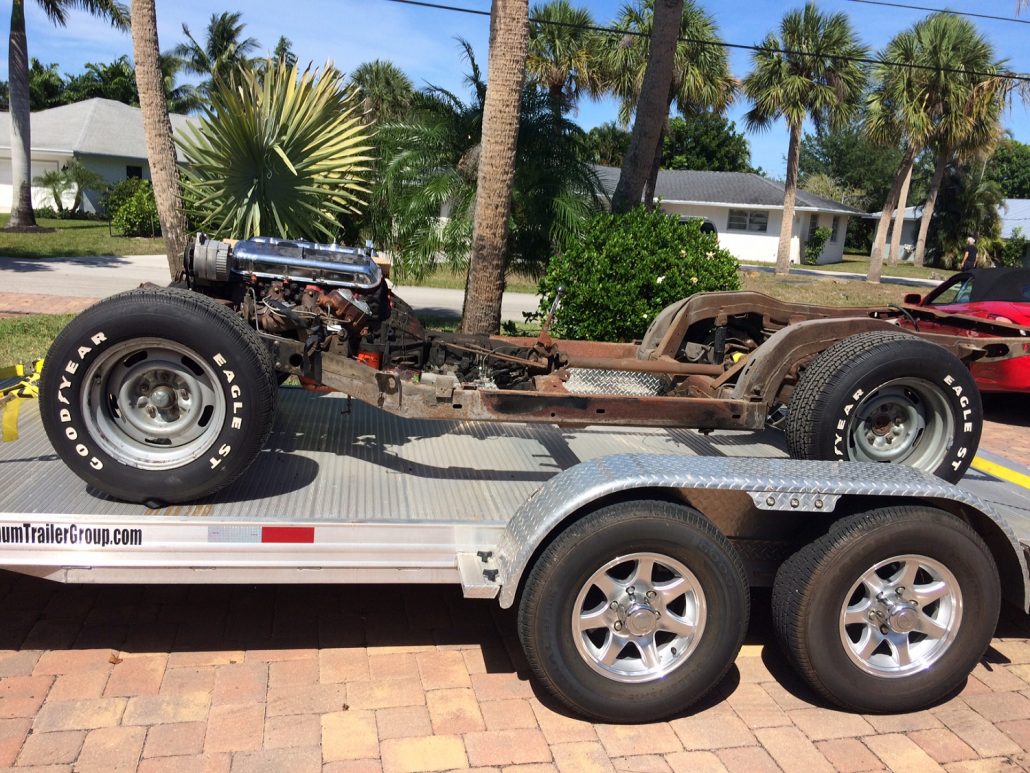 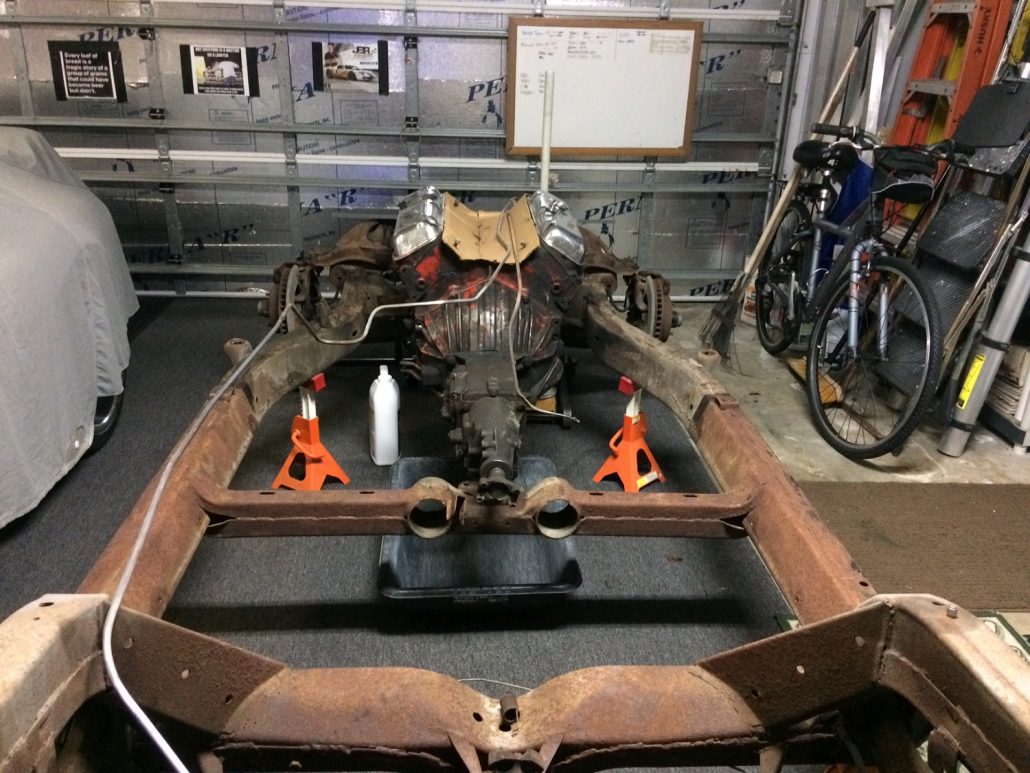 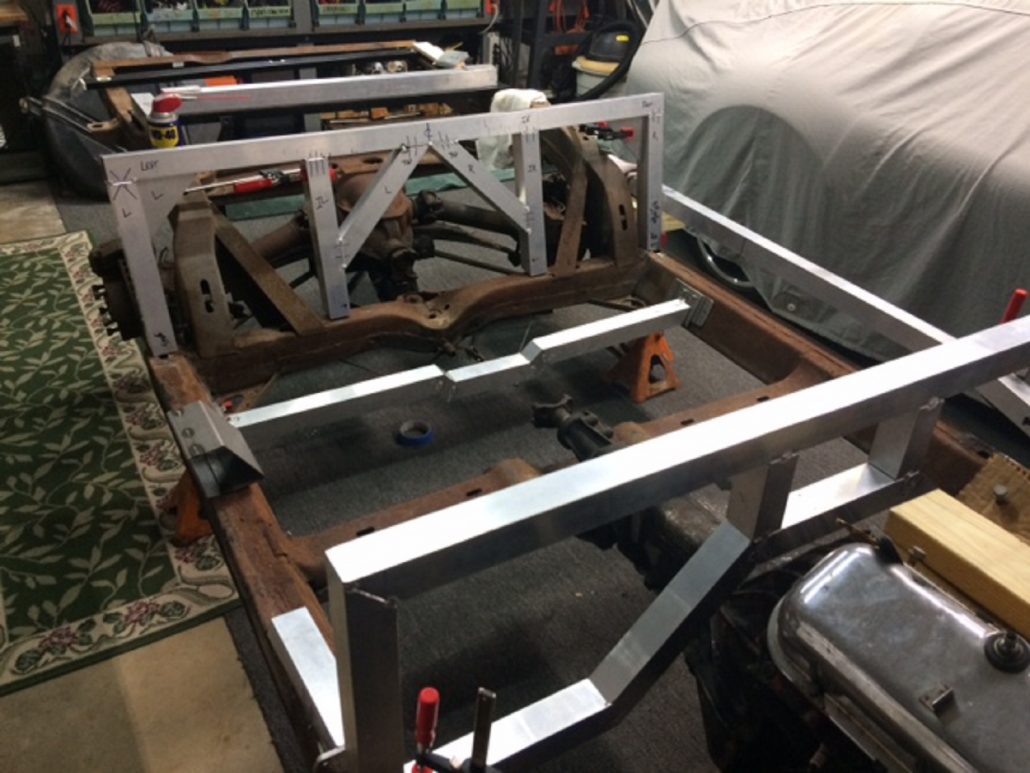 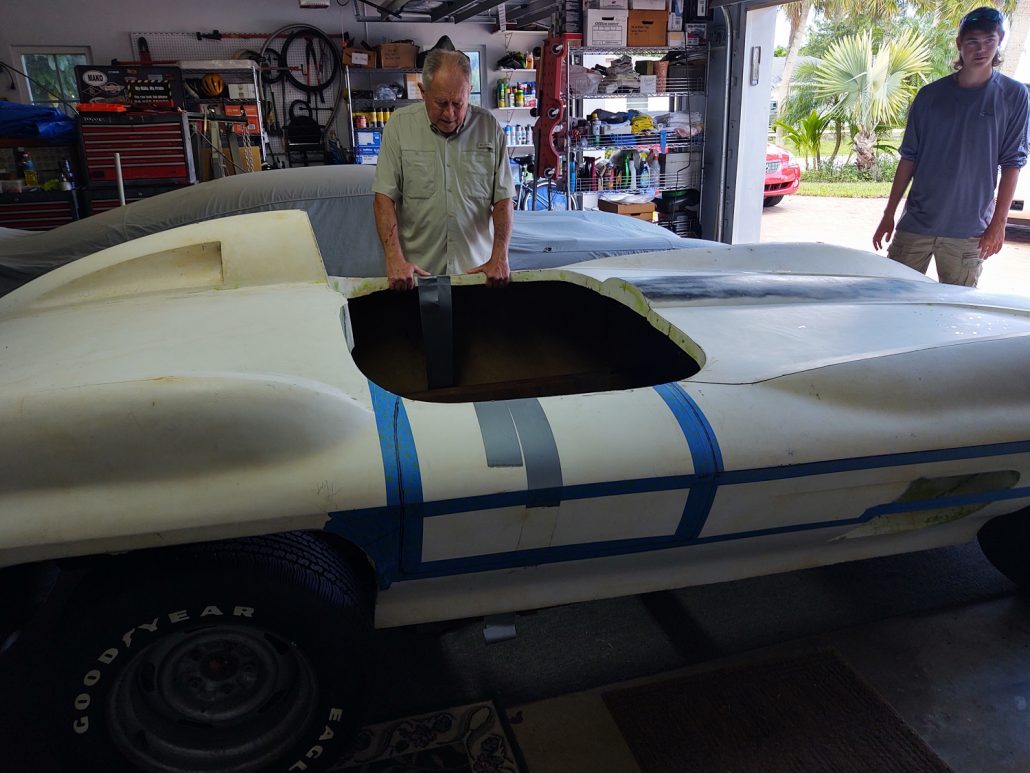 Great thanks to Joseph Aufenanger for sharing his story today and we look forward to future installments appearing here at Undiscovered Classics.  And be sure to wish Joe luck and/or ask your questions in the comments area below.  We always monitor the comments and look forward to you sharing your thoughts and/or encouragement.  There’s a long road ahead for him and he’s starting it in the Florida summer.  It’s like working on the surface of the sun here in Florida.  That’s where I would use the younger folks Joe 🙂