Above: Kyle’s Making Great Progress on his 1955 Almquist Sabre – Go Get ‘Em Kyle!

Ah…the good ole days when Kyle was an intern with us here at Undiscovered Classics.  He started with us back in 2014 and I don’t know which of us have gotten more benefit – or which of us have had more fun.  I guess the jury’s still out on that question.

Since completing his internship with us (click here to read about his experience and internships at Undiscovered Classics), Kyle has joined us yearly for major events including concours, major restorations such as the Leo Lyons and most recently the Bucci Executive RV, and sometimes for just plain car fun.  And of course, central to all interactions myself and our team has with Kyle is our mutual passion for handcrafted cars of all eras.  Kyle is now 26 years old and today’s story is the beginning of a series of stories on the restoration of one of Kyles vintage cars – an Almquist Sabre.

Take it away Kyle 🙂 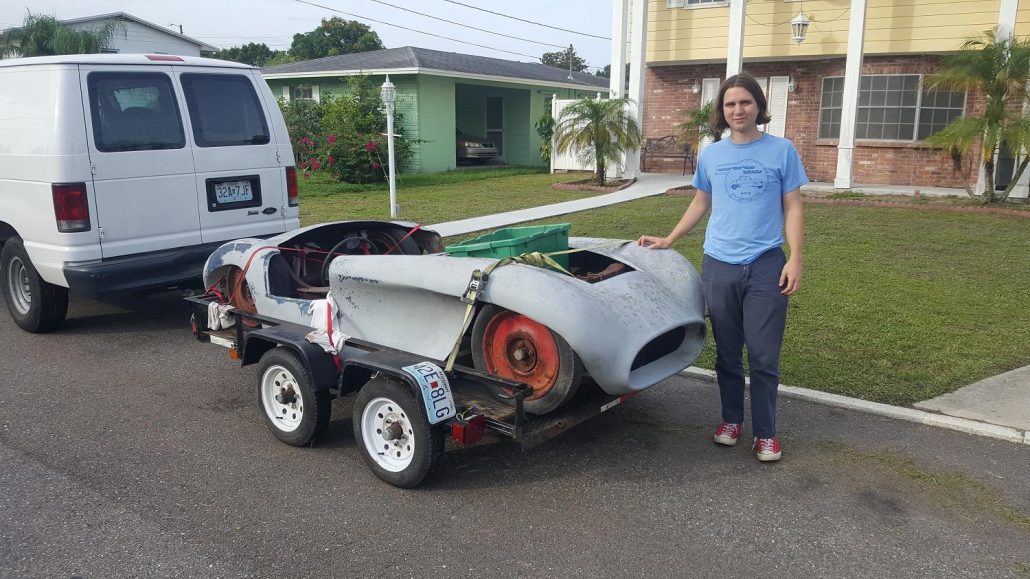 The Project Begins – July 24, 2017: Kyle With His Newly Acquired Almquist Sabre – On His Way From Tampa, Florida to His Home in St. Louis, Missouri.

A few years back I was doing some work for Geoff and I thought it would be more fun to do some horse-trading rather than cash – so I ended up with a car (he gave me several choices).  The car I chose, a 1955 Almquist Sabre, is far more rare then US currency with only ~100 ever being produced.  Along with some Crosley engines and the Fiat Topolino chassis originally destined for the build by the original owner. I set off back home to St. Louis to see what I could make of it. 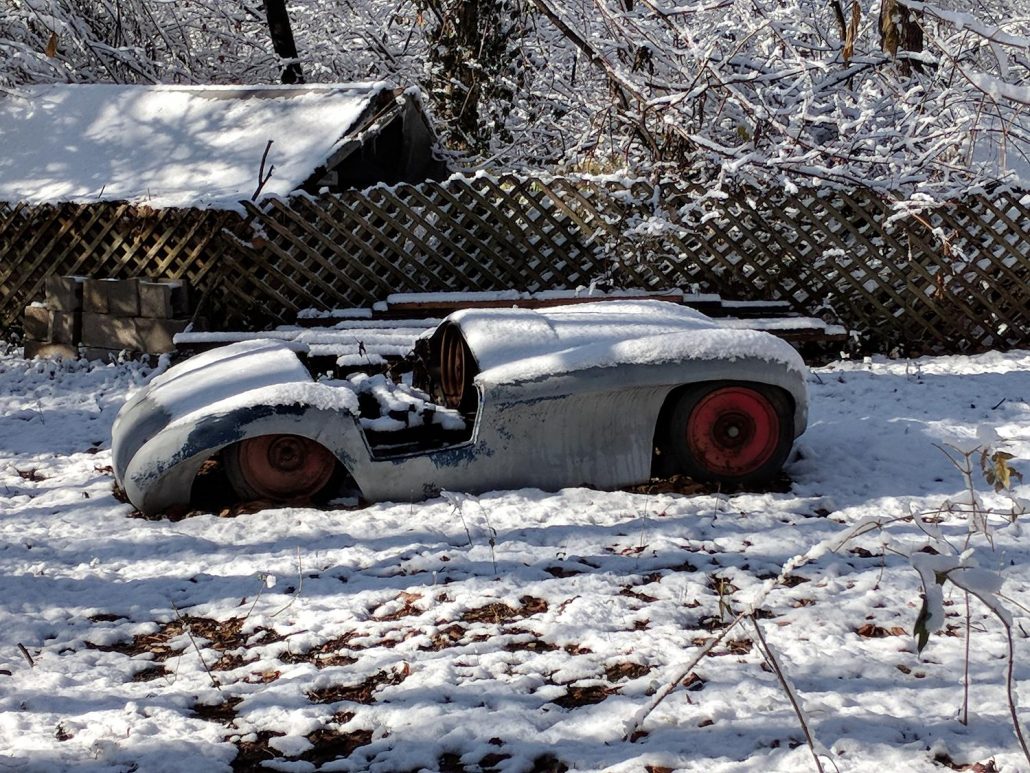 With the intention of making the drivetrain fully Fiat Topolino, I traded the Crosley engines to several friends for various parts to further different projects in the lineup. Meanwhile the body and chassis, completely unmarried and body and chassis, sat behind my house in a pile as yard art. 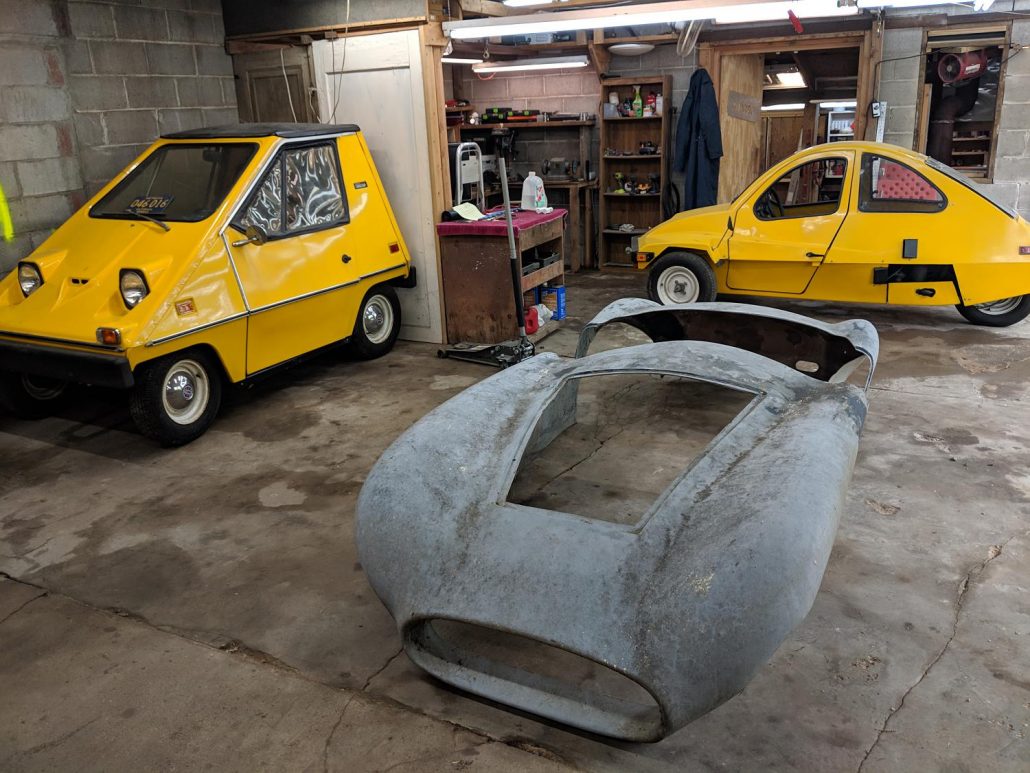 I can only imagine how the original buyer of this must have felt after ordering his ‘Bolt on Body’ and having this husk unloaded from the truck. Eventually I mustered up some courage and decided to bring it into the shop.The starting goal was to at least straighten out the body and build some kind of support so that it could be stored without further damage. And being a person who easily gets carried away with projects, this evolved into basically a full restoration of the fiberglass shell. 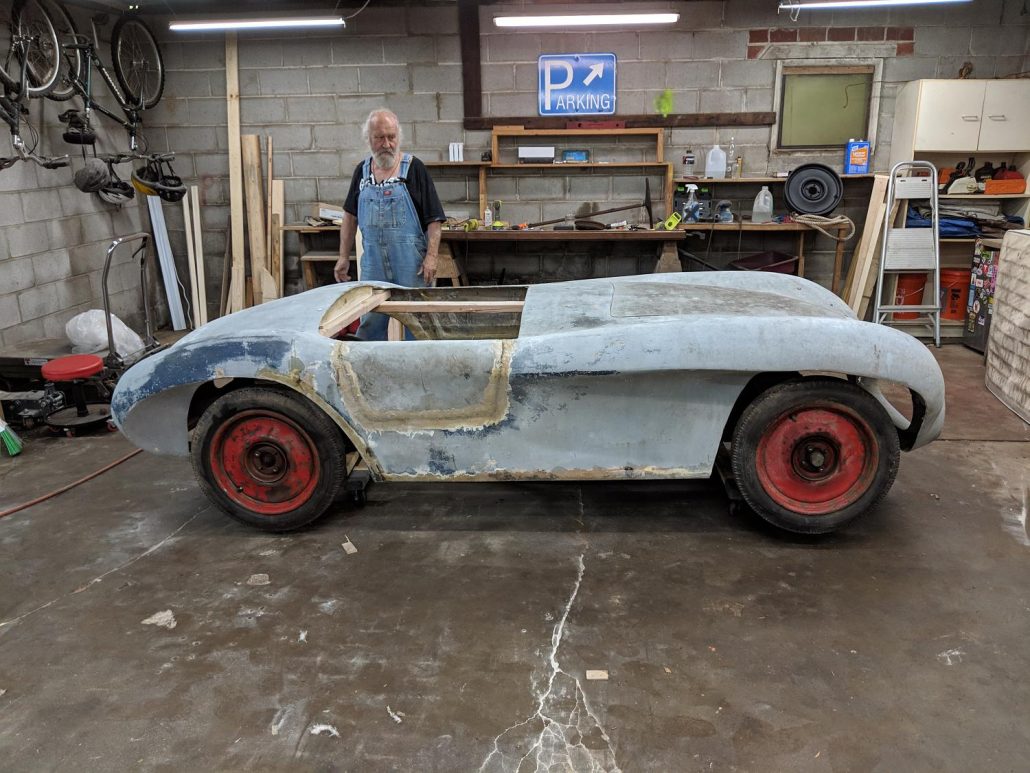 As with many of my car projects my dad is my main helper and really put some beautiful work into this car, so when I use ‘We’ that’s who. We started by building a temporary wooden frame to which the body was screwed in order to twist and the body back into its intended shape. Much of the warping and wobbliness was caused by the door cutouts, and with doors being a major pain in general I decided that at least for now I would fiberglass them in. From here we cut wooden bulkhead/firewall pieces and fiberglassed them permanently into the body. 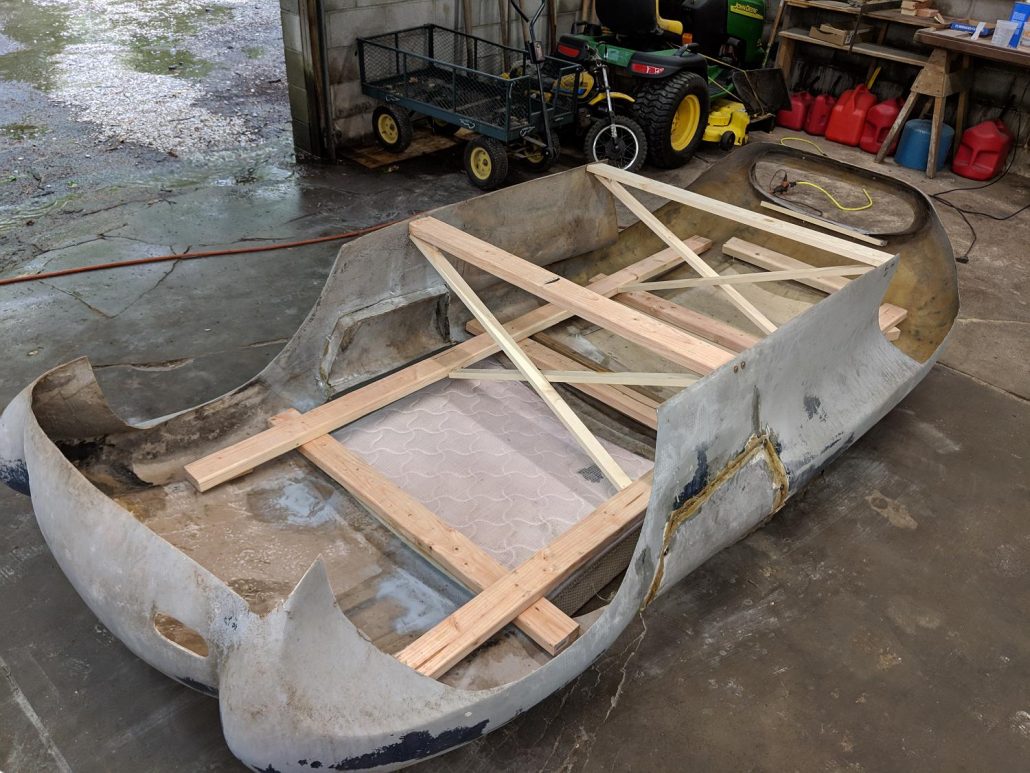 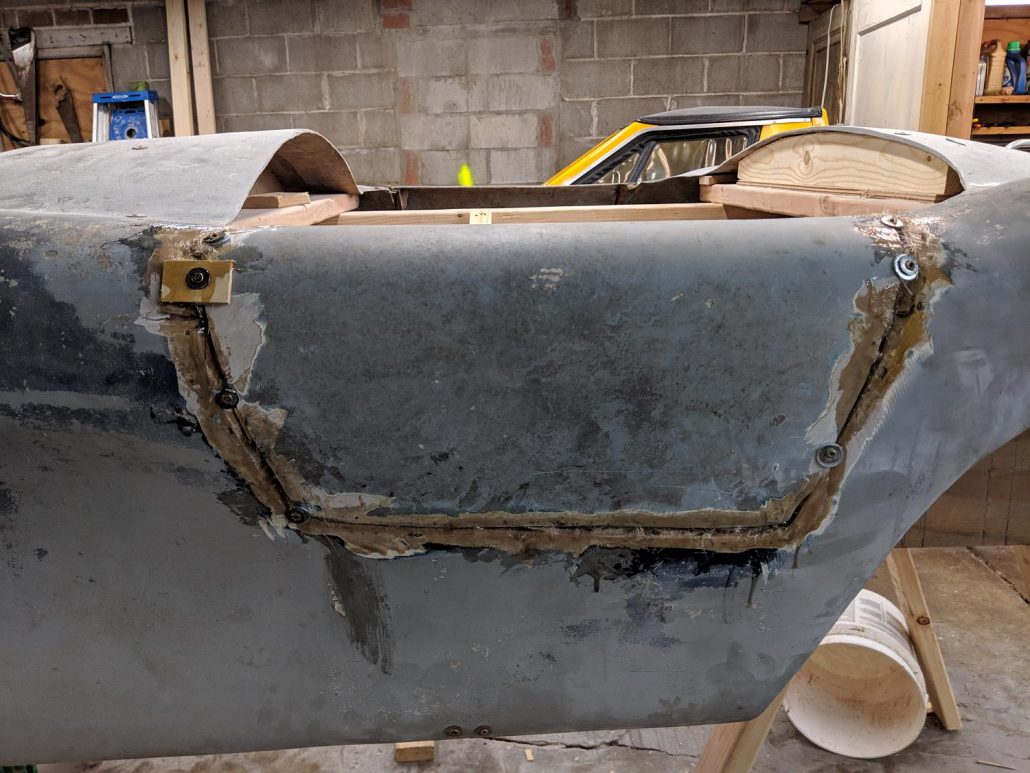 This gave the wobbly body more rigidity and allowed us to remove the temporary wooden frame. More wooden structure was added and we figured out the mounting and position on the chassis. Until this point I really didn’t think much about drivetrain since I assumed I could with minimal engineering effort find/build a stock Fiat driveline, drop the body on and be good to go. “Bolt on Body’ remember. Naturally this assumption was wrong and in order to properly fit a standard engine I would have to do significant modifications to the frame to fit under the hood. 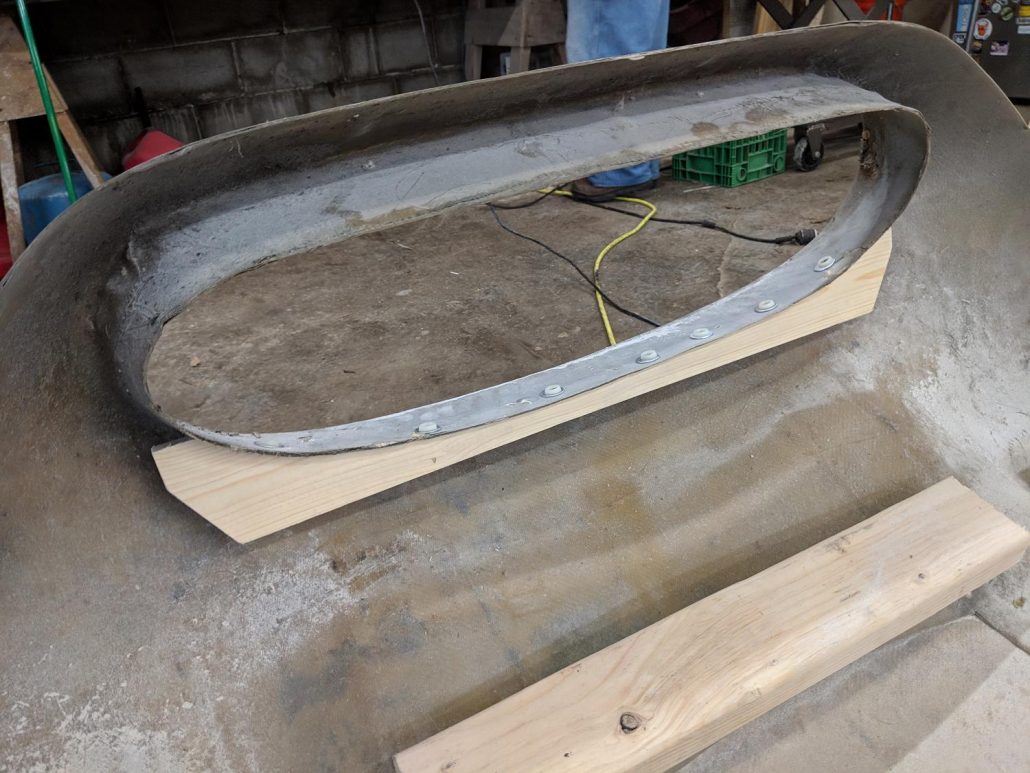 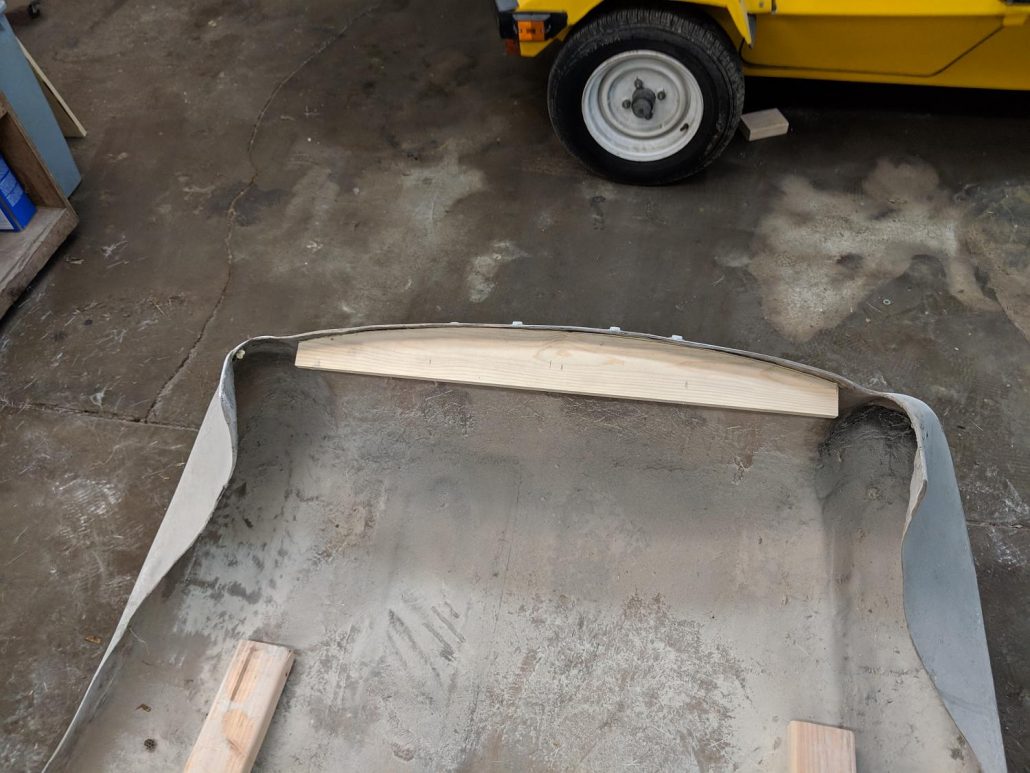 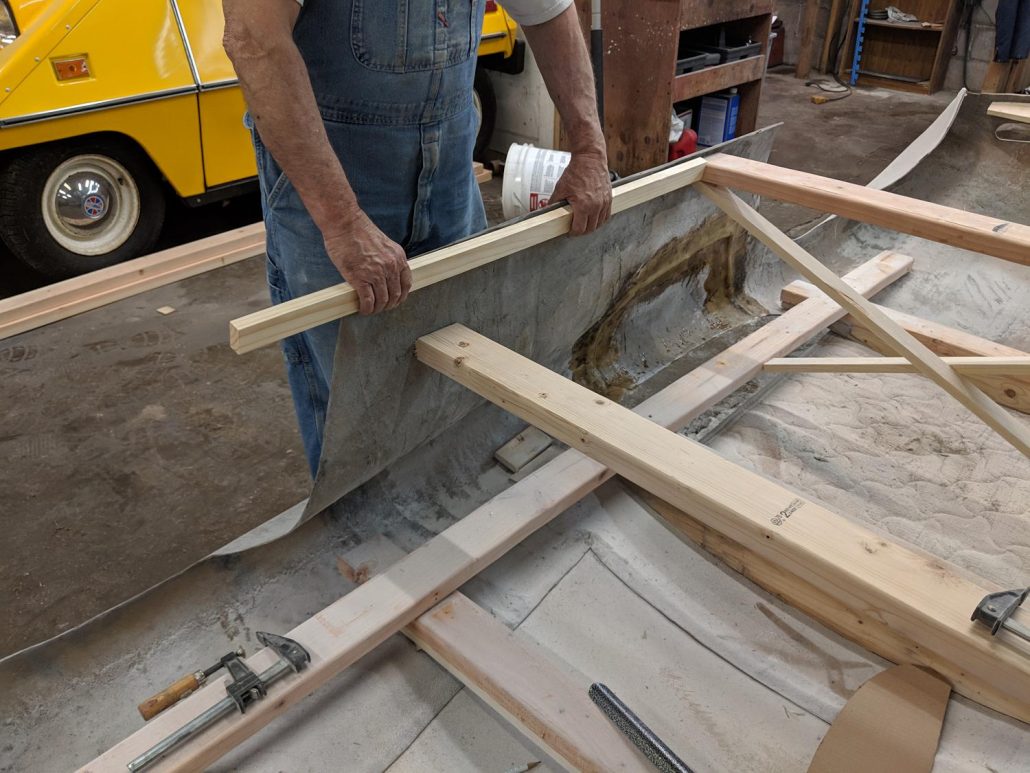 After the body was structurally secured then came the many layers of bondo, block-sand, repeat, then primer block-sand repeat and repeat and repeat (remember me knack for getting carried away, my dad has this too) so now after loads of finesse, I have a beautiful Almquist body ready for the paintshop and begging to be put on the road. I also did some minimal cleaning/derusting of the chassis and made it roll and steer so that not only could the body be stored on top it could also be moved around. 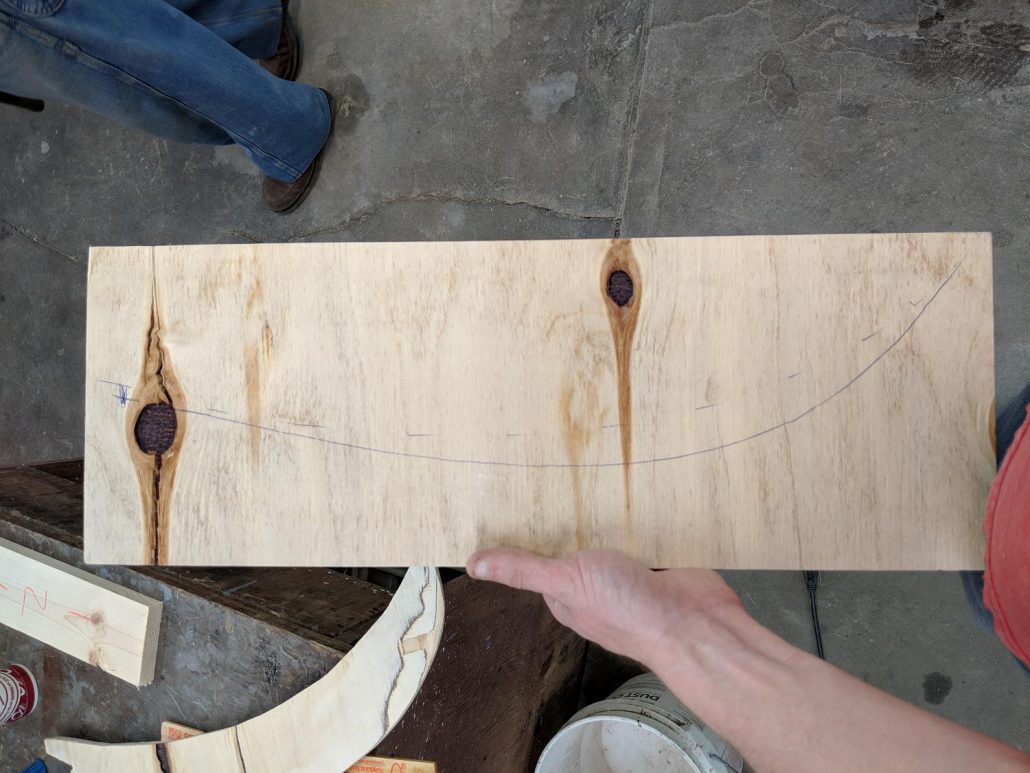 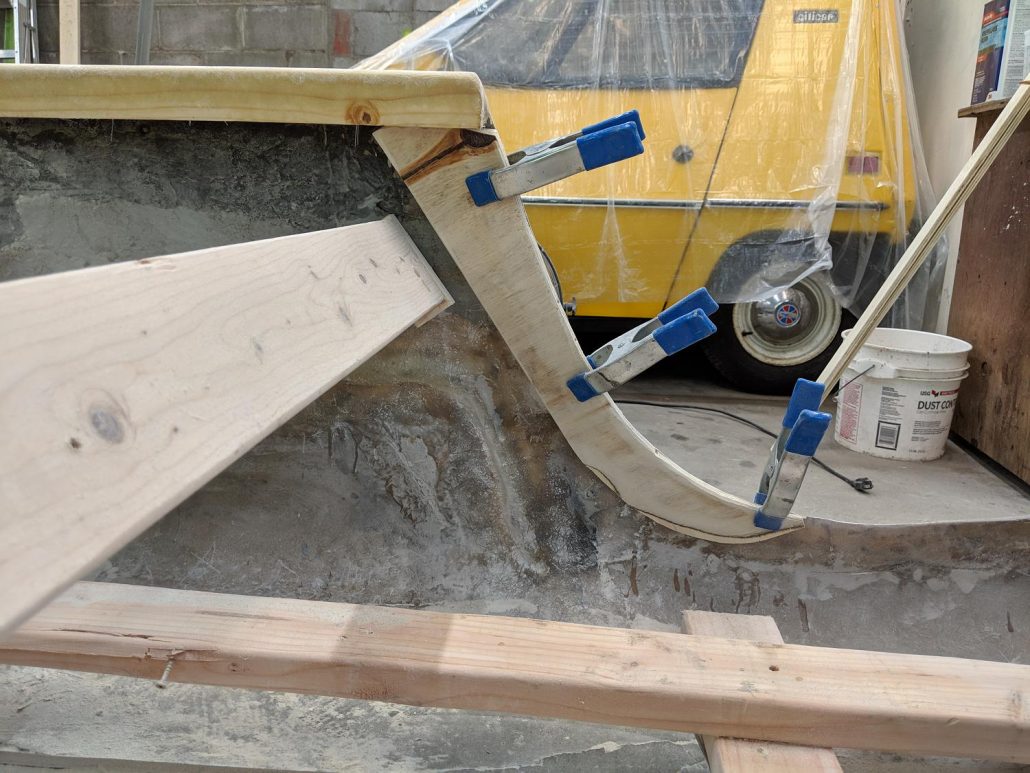 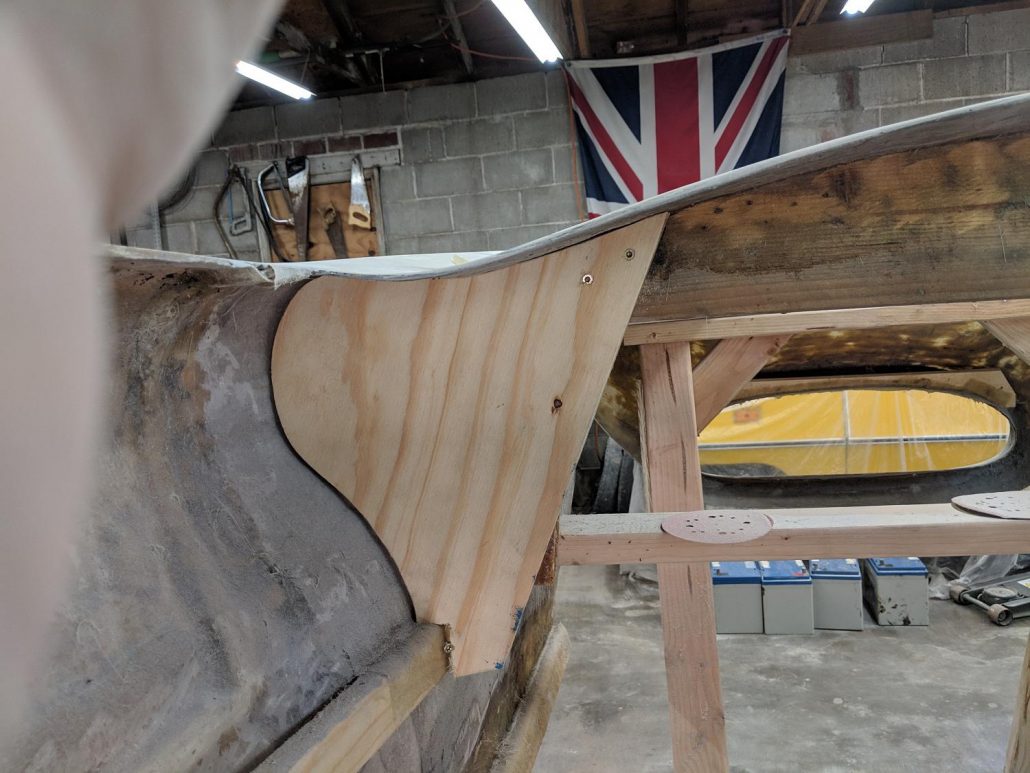 Now back to that pesky engine problem. I’m a car guy, but more than that i’m a ‘weird car’ guy. It seems that some of the most interesting, weird, innovative automotive ideas often manifest themselves in alternative fuel vehicles especially electric cars. This is why I have mainly focused my car collecting in that world (it’s also extremely untapped and amazing vehicles are yet to be discovered). Finding myself with everything from a 1981 Jet Industries ElectraVan to a 2011 Ford-ish Th!nk City  and a few more in between. 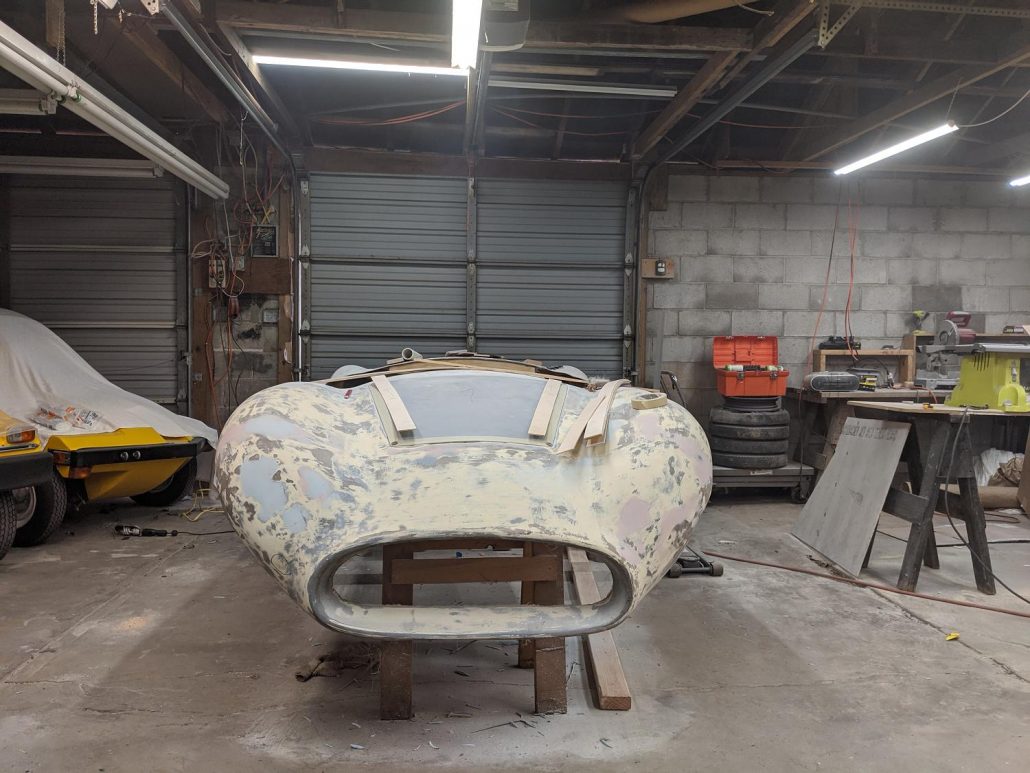 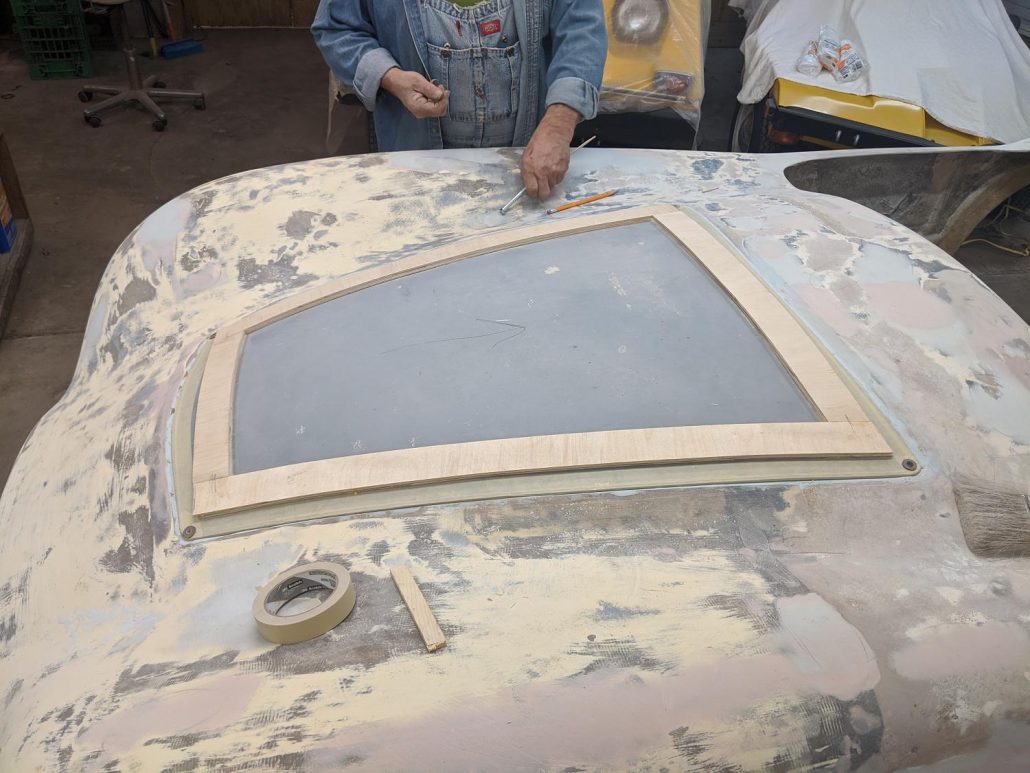 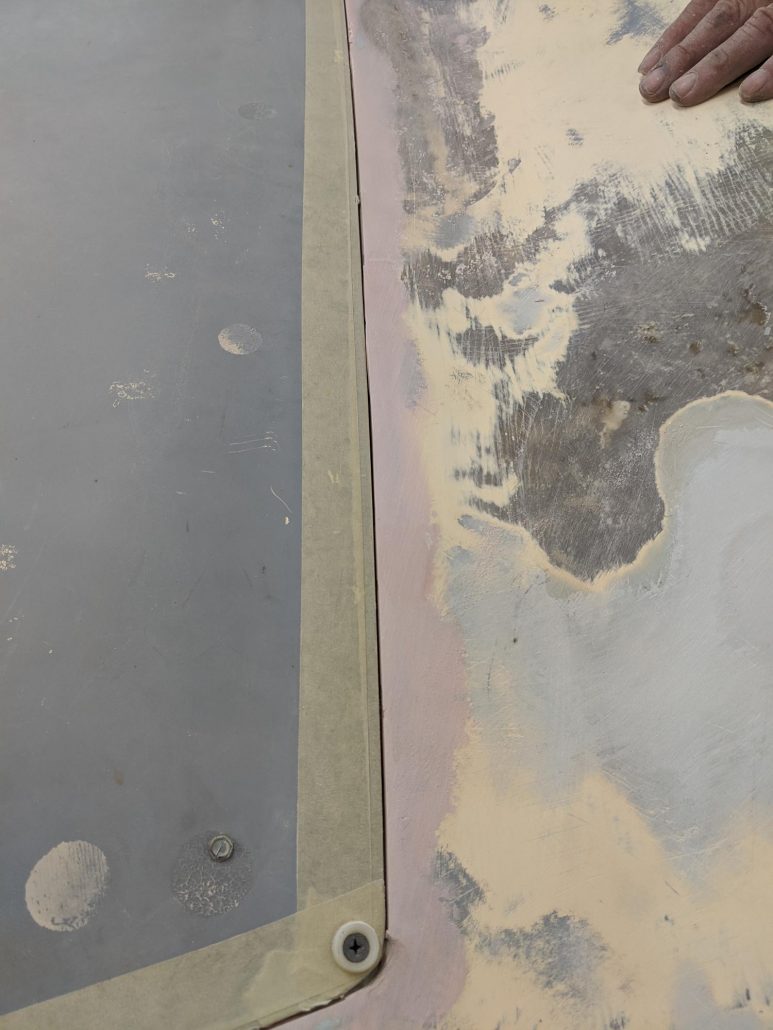 The logical solution to my ‘engine not fit’ problem is to go electric. Then it dawned on me, At some point I pulled from a Florida swamp a motor/differential from a 1970s CitiCar to pick parts off to get mine back on the road. It’s in surprisingly good condition and with only a little cleaning I was able to bench test the motor. My plan now is to rebuild this rear end assembly and replace the rear Fiat axle leaving me more room for batteries then I could ever want in a small around town car. 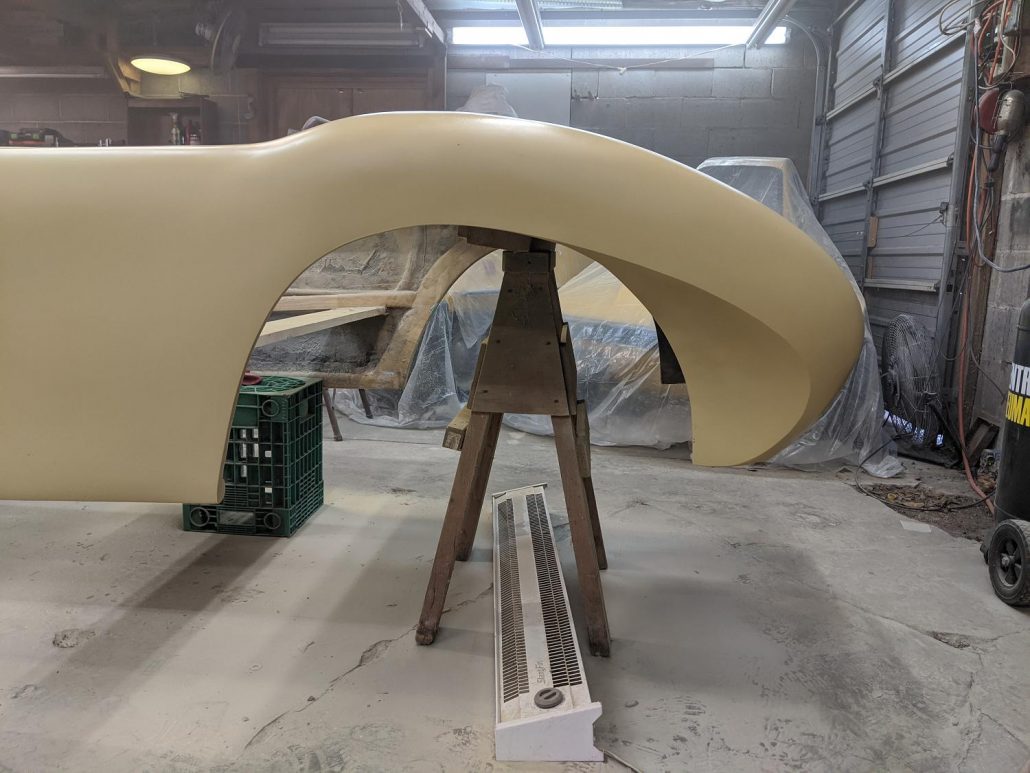 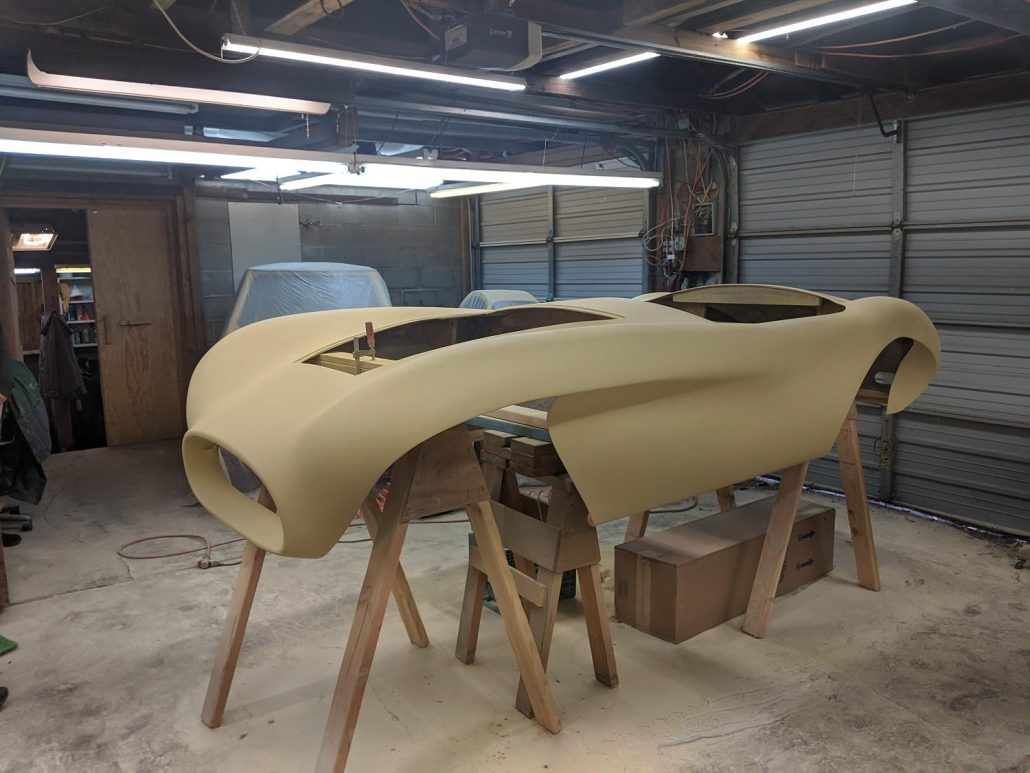 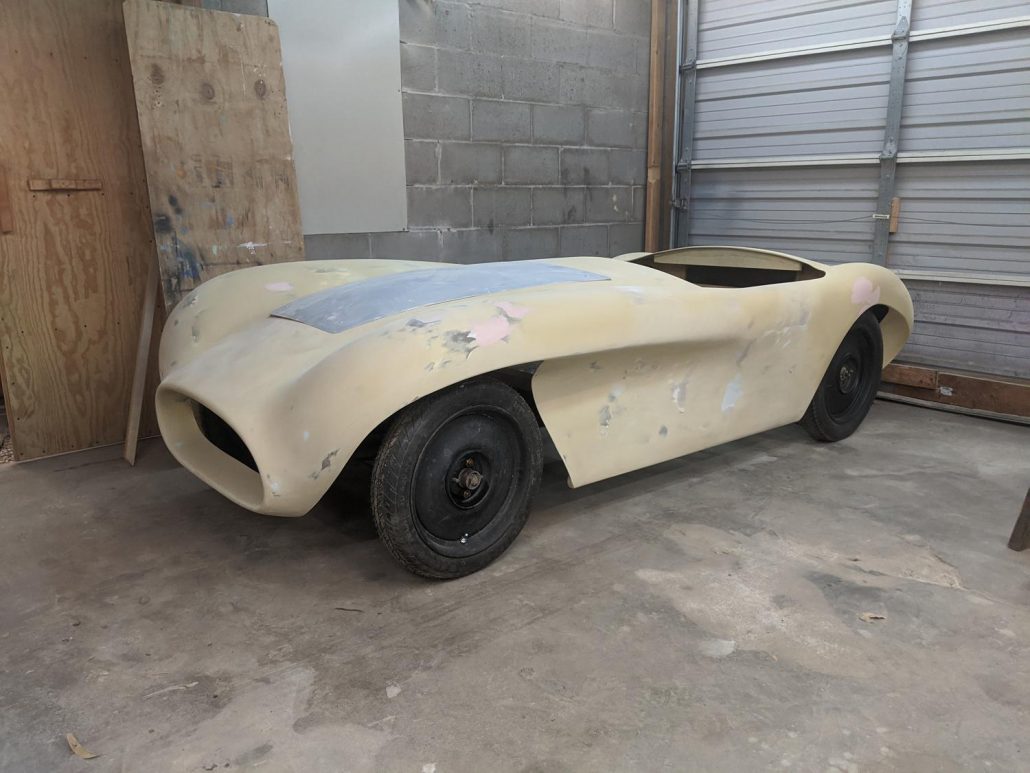 Before you ask, yes I could use a larger motor and yes I have a couple sitting on the shelf in my shop that would probability make the car do wheelies for days, but with great power comes great engineering. And my priorities are such at this point that I would rather have an easier to build, reliable slow car than a rubber laying hot rod that needs lots of engineering and my constant attention to stay alive.

What a fun project this is turning out to watch and it’s great to see the father / son combo in action with Kyle and his father.  Stay turned for further updates as the “Team Feller” makes progress on this “build.”  In the meantime, those of you who would like to learn more about Kyle, his projects and his involvement with Undiscovered Classics, click on the link below: