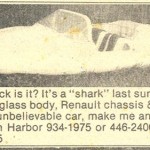 Family lore tells me that when I was very young – before kindergarten – I was terrified when the top went up or down on our 1957 Chevrolet convertible.  My parents used this fact to keep me under control.  My mom would say “stop that or we’re going to put the top down!”  I would behave myself immediately.

Later I remember being frightened by the rear end styling of a 1959 Chevrolet and its cat eyes look.  It was my babysitter’s car.  If she ever took me around the back of the car I was frightened – by the car – no less.  Perhaps I was ahead of my time there concerning the styling.

As I grew older, I began memorizing the make of each car based on the style of headlights or taillights.  Day or night I could identify almost any car from a distance.  It kept me occupied as my parents drove us around the suburbs of Chicago in the late 1960’s and early 1970’s.

My grandfather, Morrie Hacker, sold new Chevrolets from 1955 thru the 1980’s.  I would go with him to work on the weekends and stay the day at Keystone Chevrolet – later Nickey Chevrolet.  And there was no greater fun I think a kid could have had.  New cars, old cars, garages….what more was there to life. 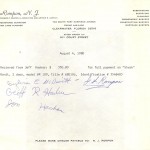 When I was 14, my grandfather brought back an interesting trade in – a 1955 Cadillac Fleetwood.  Serial number 556044492 – but who remembers such things.  My mom approved (she’s the “car guy” in the family) and I was so excited.  It needed a full restoration, but I was game – and it was going to be a big challenge.

Also when I was 14, I met Paul Terhorst – a Packard and classic car collector and historian in Chicago.  Paul took me under his wing and taught me the basics of auto repair and car restoration.  I used these new found skills in high school to complete the restoration of the Cadillac when I was 17 years old.  This took me thru 1979 when my family moved to the Tampa Florida area.

Since we were moving to a “beach” area, I thought I should work on the beach.  While still in high school, I got a job at the Caribbean Gulf / Adam’s Mark Resort on Clearwater Beach.  To and from I would drive after school and while in college.  And during one of these drives – I noticed it.  A strange car parked behind a small building in downtown Clearwater Florida.

I had no idea what it was – but I loved it!  It was strange.  It was exotic.  It was futuristic looking.  And it was old!  What in the heck was a futuristic car doing in downtown Clearwater Florida – in dilapidated condition?  It looked like something from the future came back and crash landed  – about 20 years before I got to Florida.  This was an anachronism to me – is that the right word? 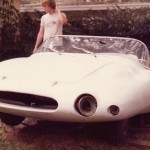 What a strange beast this car was.

I would drive several miles from Dunedin, Florida down to see the car in Clearwater.  Sometimes I would stop on the way to work – or back from work – and just stop and look at the car.  It captivated me.  It didn’t look like any of the classic Packards, Auburns, Cadillacs, and other 1950 and 1960 iron that Paul Terhorst had schooled me on.  I dare not tell Paul of the car – after all…not only was the car strange….it was made of fiberglass.

So I kept silent.  But kept visiting the car.  I even took my brothers Jon and Josh down to see the car.  Probably my sister Julie too.  My other sister Missy would have nothing of it so she didn’t go.  Either I had an inordinate amount of free time back then (not like now as I write all of the stories for our website) or I really liked what I saw.

The car wouldn’t leave my mind – and I didn’t even know what it was called.

So I finally got up the courage a 17 year old would have and asked about the car and if it was for sale.   The man who owned it – ole man “Rompon” was nice to me but firm:

“No young man…it’s not for sale.  I bought it for my daughter Sylvia, and she drove it when she was growing up.  And I’m keeping it for her.” 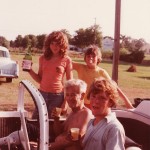 Here’s The First Day I Got It Running. My Mom Brought Out Champagne, And We Celebrated. Shown Are My Grandfather, Morrie Hacker, My Sister Julie Holding The Bottle of Champagne, And Little Brother Josh.

I replied, “I understand sir.”  I wasn’t disappointed.  I just had to follow through with my passion and see if it could be had.

So time went on – but not much time.

I read the ad and I started shaking.  I couldn’t believe it was for sale.  I didn’t bother calling – I’d have to drive back home for that – no cell phones back then.  I drove right down to where the car was, burst thru the doors and asked about the car (very politely for a now 18 year old young man).

The father who owned the car was not there.  But his son and daughter were – and they remembered me.  They asked me what I would offer for the car and I told them “everything I had” – which was $350.  They pondered for a moment, told me they had an offer of $500 but remembered how much I liked the car.

“Sold” they said!  I couldn’t believe my ears.  Boy was my mom going to be happy about this!  Now I had to figure out how to move the car – it hadn’t moved in at least 10 years. 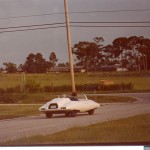 I was so excited.  I found a place where I could rent a car trailer and it had a hand-crank winch.  And I remember this like it was yesterday – within days I rented the trailer took my brother Jon with me and we went to pick up the Shark.  It had sunk into the ground about 6 inches and was mostly resting with the frame on the ground.

We backed the trailer in, fastened the winch cable to something strong and pulled that car right out of the dirt.  Thankfully, the Shark doesn’t weigh what a 1955 Cadillac weighs so coaxing it on the trailer was not a problem.  I remember filling the tires with air – because half way home there was a tremendous explosion – one of the tires blew up.  Oh well.  Stuff happens.

We got it home, unloaded it (probably dragged it off) and I surveyed with wonderment the car I had just so luckily purchased.

And then I got a call.  It was from a young man named “Rick D’Louhy.”

He had contacted the seller of the car and asked if he could contact the new owner.  He wasn’t interested in buying it.  Instead, he had information and magazines about the car that the new owner (me) might be interested in.  Wow was this helpful, and Rick (who owned a Morgan, Intermeccanica Italia, and other exotic cars at the time) helped me understand what I had bought and guided parts of my restoration too. 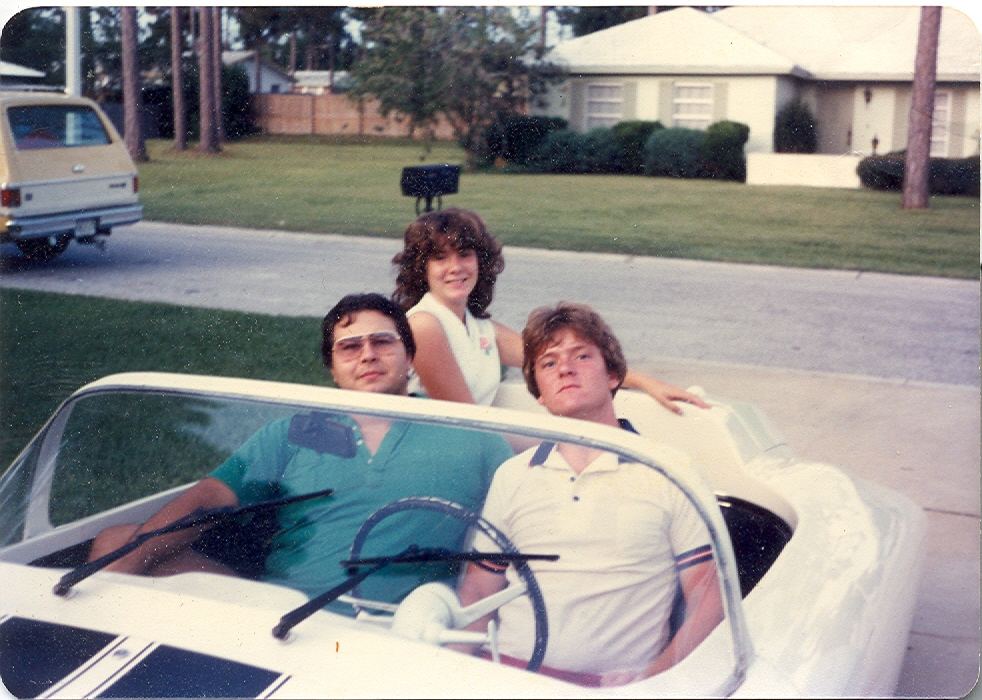 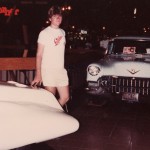 So by age 18 I had the restoration of one car down (my 1955 Cadillac Fleetwood with the help of my grandfather and Paul Terhorst) and was going to begin another – the Shark.  But where to start?  And how do you fix this thing called “fiberglass.”  And what in the world is a “Renault?”

I was still working at the Caribbean Gulf hotel and located an old Renault dealer in Lake Wales, Florida.  He could rebuild the Renault 4CV engine for about $700.  I bit the bullet and made that happen.

My uncle Phil (“Phoon” to us in the family) helped pull the engine and load it up for transport.  Next, we rebuilt the brakes, and put in new electrical wiring.  To save money, I bought a big roll of wire – so the entire wiring harness was made of green wire.  I had to label every wire.

I worked with an air conditioning company that made ductwork and created a new floor for the Shark.  Had a new plexiglass windshield made, and probably a thousand other little things too – and voila – within 1-2 years the car was restored.  Restored, at least, to the satisfaction of a near 20 year old young man.

I thought that was the hard part.  Keeping the car the next 30 years was a challenge.  I actually donated it once to a museum – which kept it for 5 years and then gave it back – just before I found the Covington Tiburon hardtop and begun the second half of this story…..the quest for forgotten fiberglass with Rick D’Louhy.

And that quest…..is a story for another day. 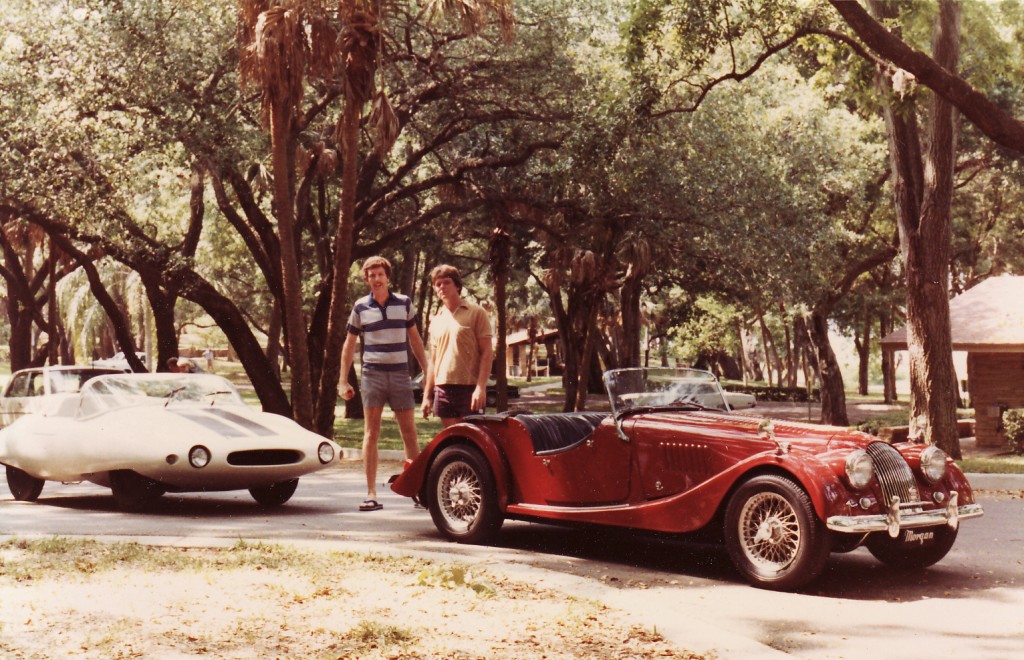 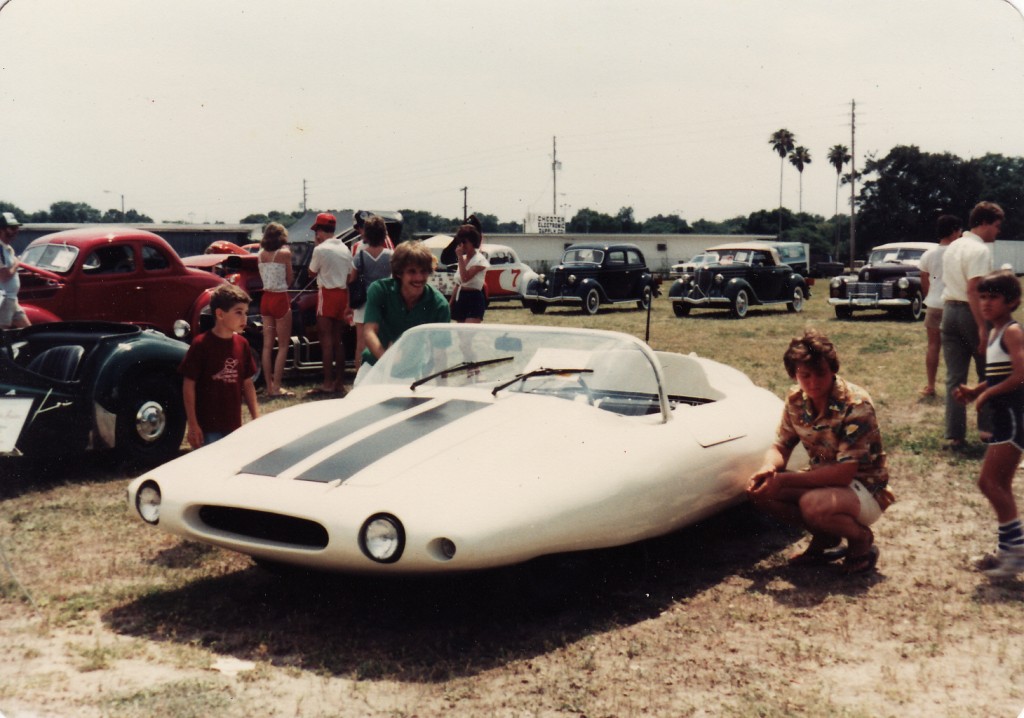 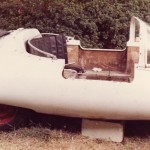 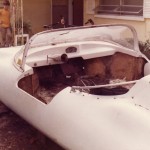 Here’s The First Day I Got It Running. My Mom Brought Out Champaign, And We Celebrated. Shown Are My Grandfather, Morrie Hacker, My Sister Julie Holding The Bottle of Champaign, And Little Brother Josh. 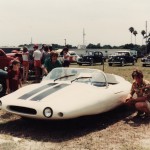 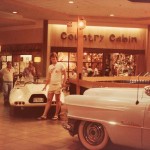 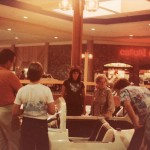 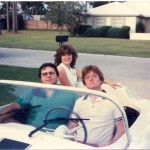 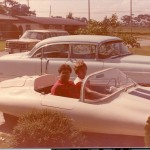 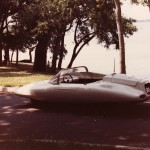 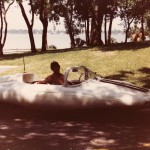 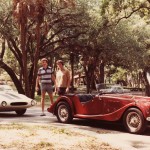 Here’s Rick D’Louhy And Geoff Hacker at Philippe Park in Oldsmar Florida – Around 1982. 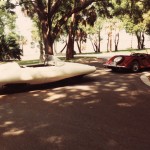 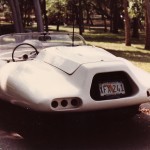