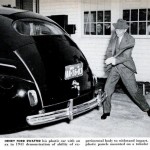 This is Actually a Photo From 1939 Showing Henry Ford Testing The Fiberglass / Plastic Trunk Lid With An Ax. It Wasn’t Until 2 More Years That His Full Plastic Car Was Built.

Think back to how early this article is gang….July 1952.

Fiberglass cars had just been introduced as a possibility 9 months before at the Petersen Motorama in November 1951.  By now the American culture had heard about this innovation and they wanted to know more.  Popular Science Magazine was there to help.

Let’s explore what they had to say so early on in the life of the fiberglass automobile:

By Carl Konzelman
Auto Bodies of Reinforced Plastics Have Lots of Good Points But They Are Not Ready To Move From The Custom Class Into Mass Production:

Henry Ford once took an ax…
And gave the body forty whacks…
When he saw what he had done….
He gave the fenders forty-one…

Needless to say, the body that Henry took an ax to belonged to a Ford.  It was 1941 and the pioneer of mass-produced autos was demonstrating his newest baby – a plastic auto body.  When it absorbed punishment without a whimper, auto owners everywhere pipe-dreamed an early flow of indestructible plastic cars from Detroit’s assembly lines. 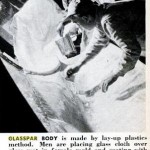 Caption: Glasspar Body Is Made By Lay-Up Plastics Method. men Are Placing Glass Cloth Over Glass Mat In Female Mold And Coating With Vibrin Resin. Glass Must Be Tailored To Fit.

Plastics have come a good way since Henry Ford’s time.  Originally, plastics were used only for small objects because high pressure and heat were required to form them.  Today new resins like the polyesters have changed the picture.  They set with comparatively low pressure and heat – some without any pressure at all and at room temperatures.  And now glass fibers can be used to strengthen these plastics much as steel rods strengthen concrete.

The glass comes as a woven fabric – which is expensive – or a mat of fibers.  Either type must be pre-tailored.  The glass can be cut into pieces that fit the mold, or “preformed” – chopped up and sucked onto a form roughly the shape of the finished product.  Next step is to combine the glass fibers with the plastic resin.

The simplest method, used for the Glasspar body, is the lay-up.  Tailored glass-fiber pieces are put on a female mold that has been slicked with a fast-curing coat of plastic to assure a smooth outer surface.  Plastic is squeegeed into the glass cloth and allowed to harden.

The lay-up method is especially suited for large objects and comparatively small output.  Frequently, however, some form of low-pressure molding is used to make the material more compact.  The fiber and resin may be pushed against a female mold by an inflated rubber gag, or sucked against a male mold by a vacuum.  For high output, matched male and female molds, heated to cure at the same time, are widely used.

Reinforced plastic has a lot to offer.  Weight for weight it can be made stronger than steel.  Brilliant colors can be added in the resin.  The plastic can be made as resilient or resistant as you desire.  It makes much lighter auto bodies, which in turn make possible lighter engines.  Sound and heat insulation – and therefore comfort – are improved.  Construction is simplified. 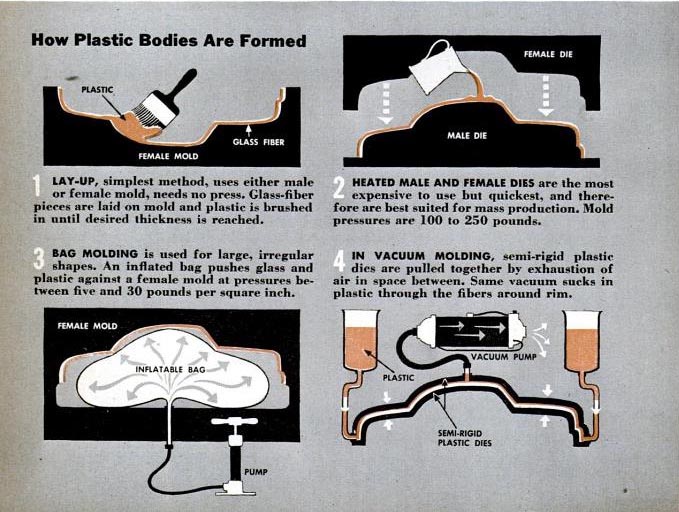 Ford’s pioneer plastic car had a welded structure of steel tubes, serving both as chassis and body frame, that was covered with plastic panels.  William B. Stout, noted aircraft and auto designers, later developed a fiberglass car with no frame at all.  Even its bumpers were plastic.  It was 1,000 pounds lighter than a conventional body, but Stout added ruefully that it was too expensive to be produced at that time.

Chrysler, too, has spent much time and money on the plastic-body dream.  Fenders, doors, rear-deck lids, hoods, instrument panels and removable convertible tops were fabricated of polyester plastic and glass fiber as long ago as 1942-1943.

With all this research behind them, the auto men recognize the advantages of the plastic body.  But, they say, it cannot be made for a mass market.  Here are the reasons they give.

Basic is the cost of the material itself.  Steel sells for less than a nickel a pound.  The price of reinforced plastics varies from around 50 cents a pound when mat is used to as much as $1.75 a pound with a glass cloth.  This is partially offset by the smaller weight of plastic required.

For small runs, such as custom sport bodies, it is more than offset because expensive steel-stamping presses are not needed  But in mass production the cost of presses is spread over a large number of bodies.

Also, plastics are limited in quantity.  Resin production for 1952 is expected to be slightly above 1,300,000 tons.  In contrast, the steel industry turns out almost 85 times that tonnage.  A major stumbling block is that all the production methods developed for plastic cars so far are too slow.

Automotive engineers say that the most practical means of mass producing plastic bodies would be post-forming – the quick and simple pressing of an already cured sheet of plastic laminate into body sections.  This is not possible now because the best resins set permanently on curing and lose their formability.  And glass fibers used in more durable plastics are not elastic enough for post-forming; if they were, they would lack strength.

Without a post-forming material, the all-important factor of time becomes a tough obstacle.  The difference in time between steel pressing and plastic lay-up of auto bodies is hard to figure.  A research engineer’s very rough guesstimate of the time required for the Glasspar body is 14 man-hours.  A steel body, complete and ready for the chassis, takes about 40 man-hours, but there are several hidden gimmicks.  The Glasspar is an extremely simple body.  And the plastics figure is for forming alone, while the steel-body time includes paint, all trim, and upholstery.

Plastic experts agree with the auto industry that plastic bodies mass-produced in the Detroit manner are not practical now.  But they are developing new powerful presses, new resins, and new processes.  When low-pressure operations can be speeded and perfected, and when plastics meet steel on even ground right down to the last second and the last decimal point and the last fastening, we will be a lot closer to mass-produced plastic auto bodies.

So….you now have had a chance to peer back into history and see what our beloved fiberglass sports car companies were up against.  It seems from reading this, that Detroit wasn’t going to take the plunge and fiberglass would be a material used on a small volume basis in custom shops – at least as written above in the summer of 1952.

Of course all of that would change in just one year with the introduction of the 1953 Corvette….but that’s a different story.

Hope you enjoyed the article today, and until next time… 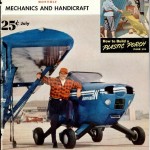 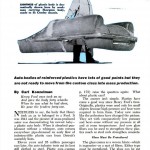 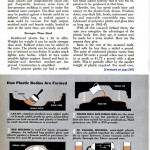 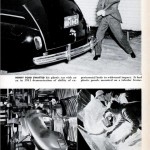 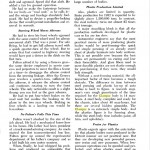 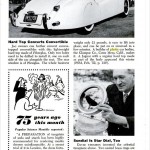 Caption: Glasspar Body Is Made By Lay-Up Plastics Method. men Are Placing Glass Cloth Over Glass Mat In Female Mold And Coating With Vibrin Resin. Glass Must Be Tailored To Fit. 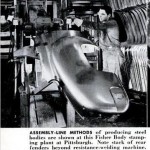 This is Actually a Photo From 1939 Showing Henry Ford Testing The Fiberglass / Plastic Trunk Lid With An Ax. It Wasn’t Until 2 More Years That His Full Plastic Car Was Built. 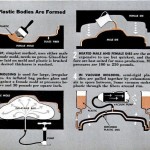 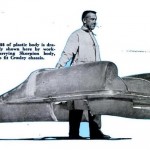 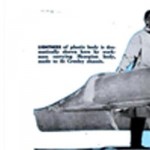