It’s neat to see that Road & Track Magazine – and others too – were road testing some of our favorite fiberglass sports cars of the ‘50s and ‘60s.  Interestingly, these official “Road Tests” do not start to appear until around 1960.  Another “Road Test” that comes to mind that we’ll feature in the near future is of the Shamrock fiberglass car.

For you Devin fans out there…checkout what the Road & Track staff thought of Devin’s finest offering, the Devin SS sports car, in their 1960 Road Test below:

Road & Track Annual: 1960
A Machine To Satisfy The Demands Of The Performance-Conscious Enthusiast

Ever since we first got a look at the chassis for the Devin Super Sports (April issue) we’ve been intrigued with the thought of testing the completed car.  The idea of coupling the potent Chevrolet V-8 engine to a chassis and running gear that could really handle this kind of horsepower appealed to us, and phone calls and letters have shown the interest of others. 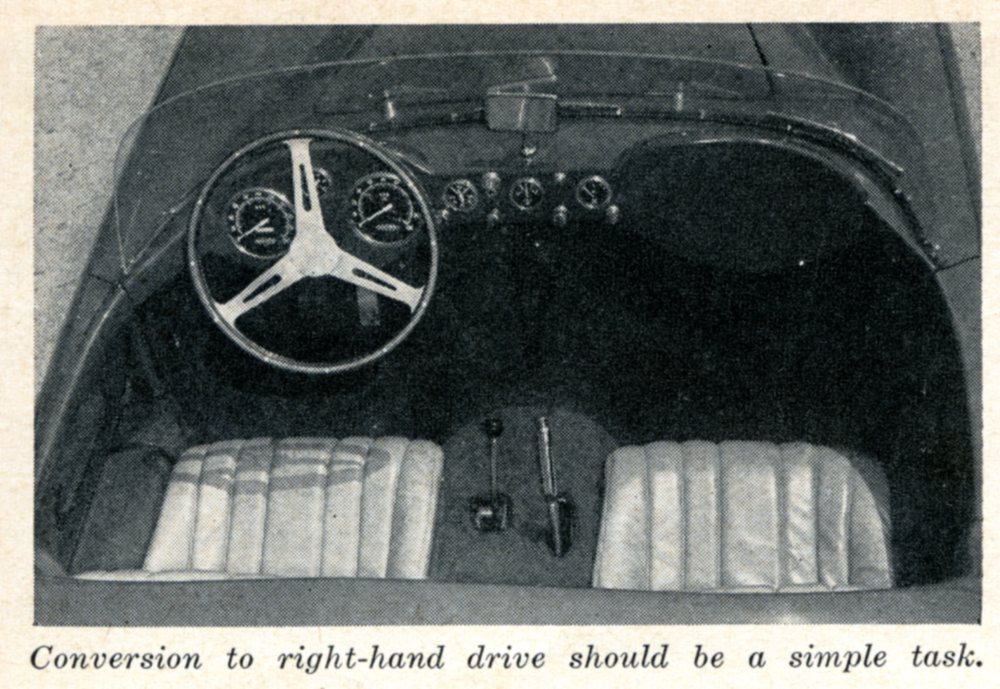 The anticipated day arrived when Pete Woods, General Sales Manager of The Evans Company (which is handling all sales and distribution for the Devin SS), drove up in front of our office in this brutish-looking and strictly businesslike piece of equipment.  Our office was quickly emptied as everyone turned out to inspect the car.

In appearance it just looks as though it would go, and indeed a local minion of the law circled the block on his Harley and stopped for a better look.  No ticket, just questions and a genuine interest in this brilliant red car.  The finish of the fiberglass body is excellent.  All too often bodies made of this material are either wavy or show surface irregularities that immediately announce their construction.  The Devin body is so smooth it could be, and has been, mistaken for metal.

This was not actually one of the production bodies, although the female mold for the bodies was taken from this one and there is no reason why the production line bodies will not be equally smooth.  In fact some minor defects in this prototype, such as the gap around the hood and deck lid, are being corrected in the mold.  Even as is, the over-all impression is good. 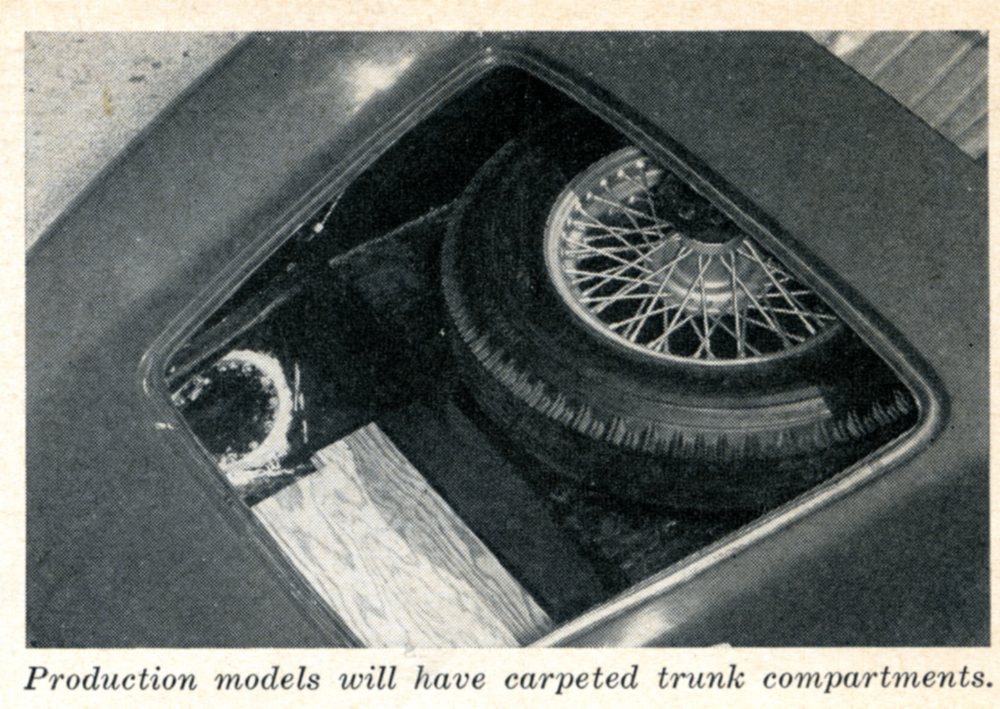 The interior is tastefully done with carpeting on the floor and true bucket seats that look as though they would be very comfortable; they did not disappoint us.  Foot room is more than adequate and is especially so when one considers the rather short (92-inch) wheel base and the comparatively large engine (by sports car standards).

Luggage space, while not huge, is big enough for two moderately sized suitcases or one fairly large one, with room around the edges for soft bags.  This space will be carpeted on production models but was not finished on the test car.  The Stewart-Warner instruments are well placed and easily read.  We were pre-sold on functional round dials with contrasting numerals; in this case they are white on black, and their readability is a genuine pleasure and blessing.

The spring steel bumpers, front and rear, are fully adequate in a direct-line impact but will not offer much protection against an angular attack by another car, particularly a big one. 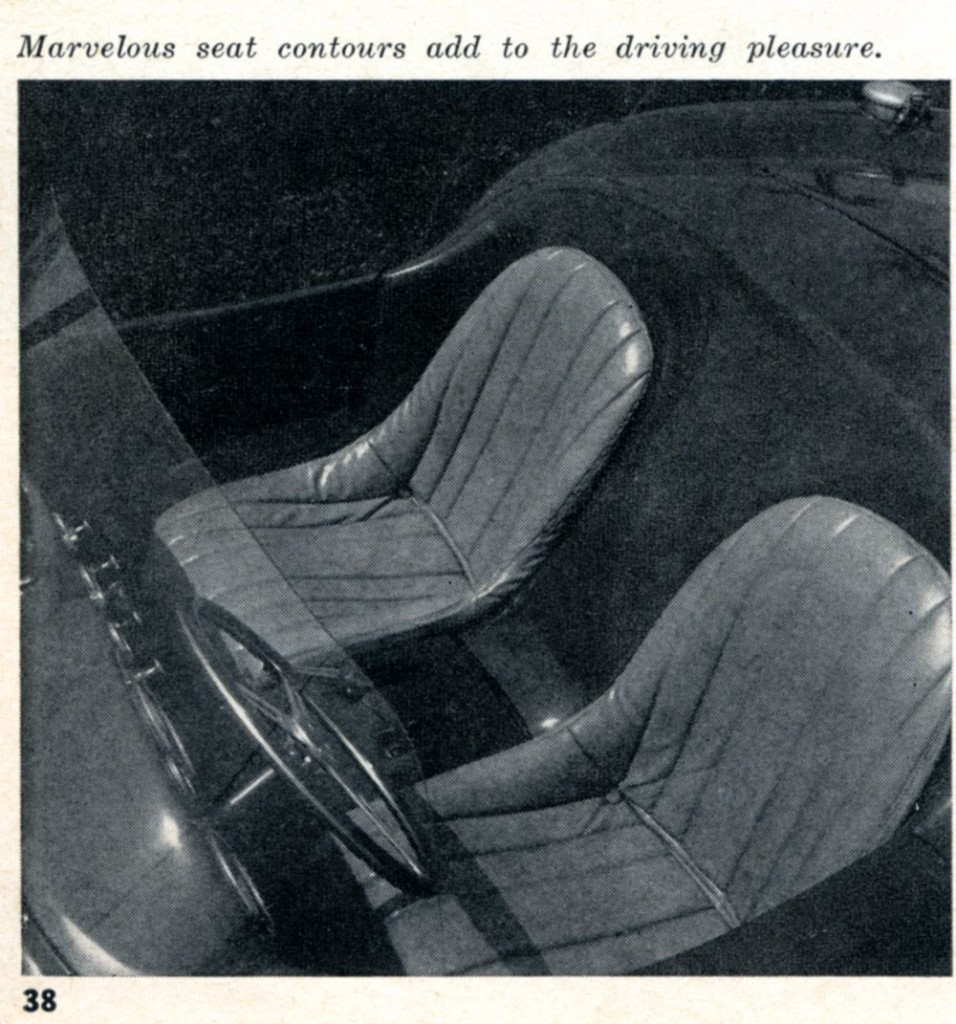 A look under the hood reveals a stock-looking Chevy V-8 engine except for the Spaulding “Flamethrower” ignition.  Contrary to our report in April, the cars will all be delivered with identical engines installed, and no options.  The radiator is mounted at about 40 degrees off vertical and there is no fan.  We anticipated an overheating problem but, as we later found out, the engine runs right at 180 degrees.  Once only it got to 200 degrees during the test, after six acceleration runs to 100 miles per hour.

Adhesion to the road in accelerating, braking or cornering is of the highest caliber, helped by the aforementioned independent front suspension and the de Dion rear end.  The rear brakes are mounted inboard, decreasing the unsprung weight and further aiding the road-holding and accelerative ability.  The brakes, Girling discs all around, have to be tried to be believed.  Hard application of the brakes at 100 mph speed gives the driver and passenger the feeling that the car has suddenly been snatched by the arresting hood cables of an aircraft carrier.  All stops were made in a straight line without the snaking so common in hard brake applications.

During acceleration runs it was difficult to break the rear wheels loose, although it naturally could be done with this power/weight ratio.  This attests to the fine over-all balance of the car achieved by the use of a de Dion rear end, Dunlop R-4 tires and the excellent weight distribution. 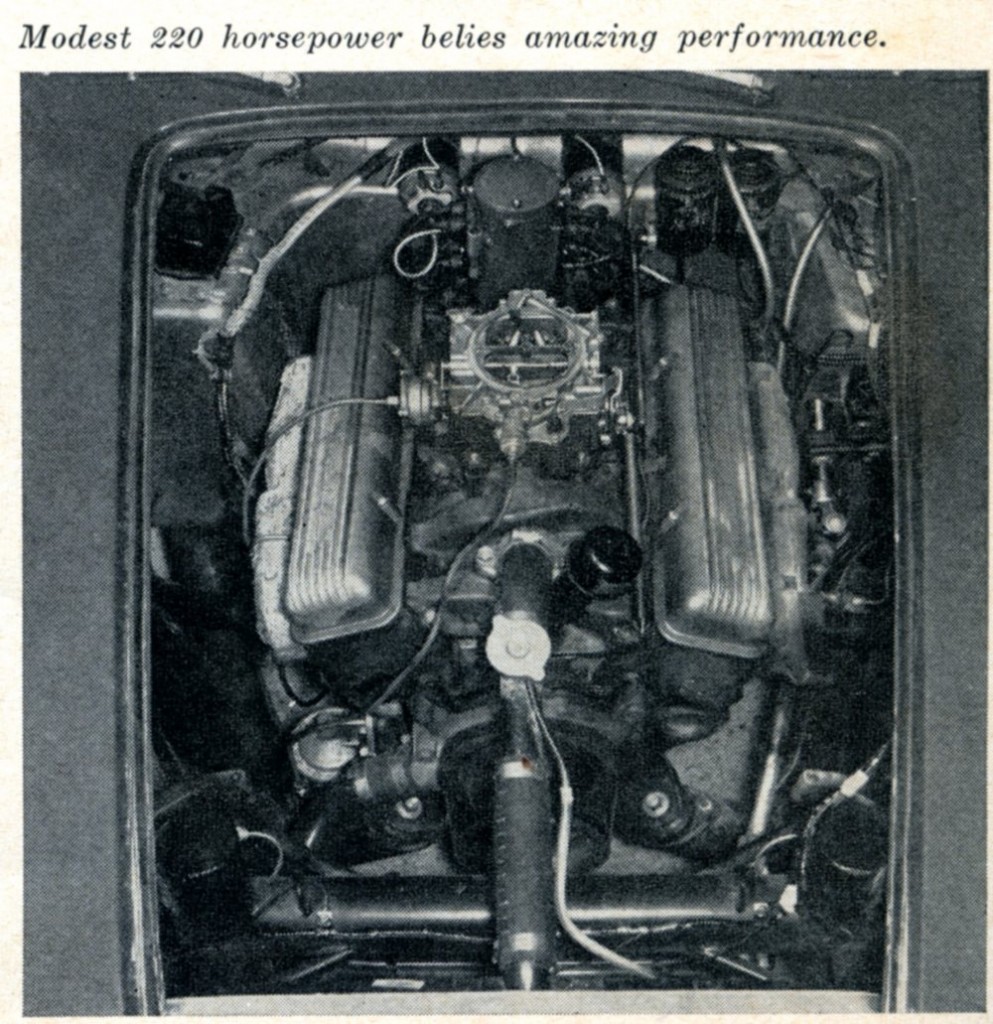 The driving compartment is roomy and comfortable and gave the impression that two people could make trips of considerable duration in complete comfort, or that a driver could run an endurance race without undue fatigue.  The only drawback to the driving position was the limited space around the clutch pedal, which required the use of the heel rather than the ball of the foot to actuate it.  Both clutch and brakes are hydraulically actuated and operated smoothly at all times.

No generator could be seen in the engine compartment and Woods explained that it is in the back of the car, driven off a pulley at the front of the differential.  Opinions are varied on the advantages of this type of installation.

It does put the generator in a cooler place than could be found under the hood, and it is not subject to the wide speed range of the engine (the driveshaft, of course, runs at lower revolutions per minute except in 4th).  It would seem that the advantages are greater than the disadvantages.  On competition cars this is also a good method of adding weight to the rear wheels.  Not much, but every bit helps.

Driving the Devin SS in traffic proved it to be very docile.  The flexibility of such a light car with 220 horsepower on command makes the use of the gearshift lever almost unnecessary.  With its single 4 throat carburetor and stock cam, the low-speed torque is excellent and the car can be driven around town at low speeds in 4th gear if desired without the bucking and lurching inherent in engines carbureted and cammed for maximum performance.  When a little more urge is needed, the Corvette 4-speed box performs in its usual flawless manner. 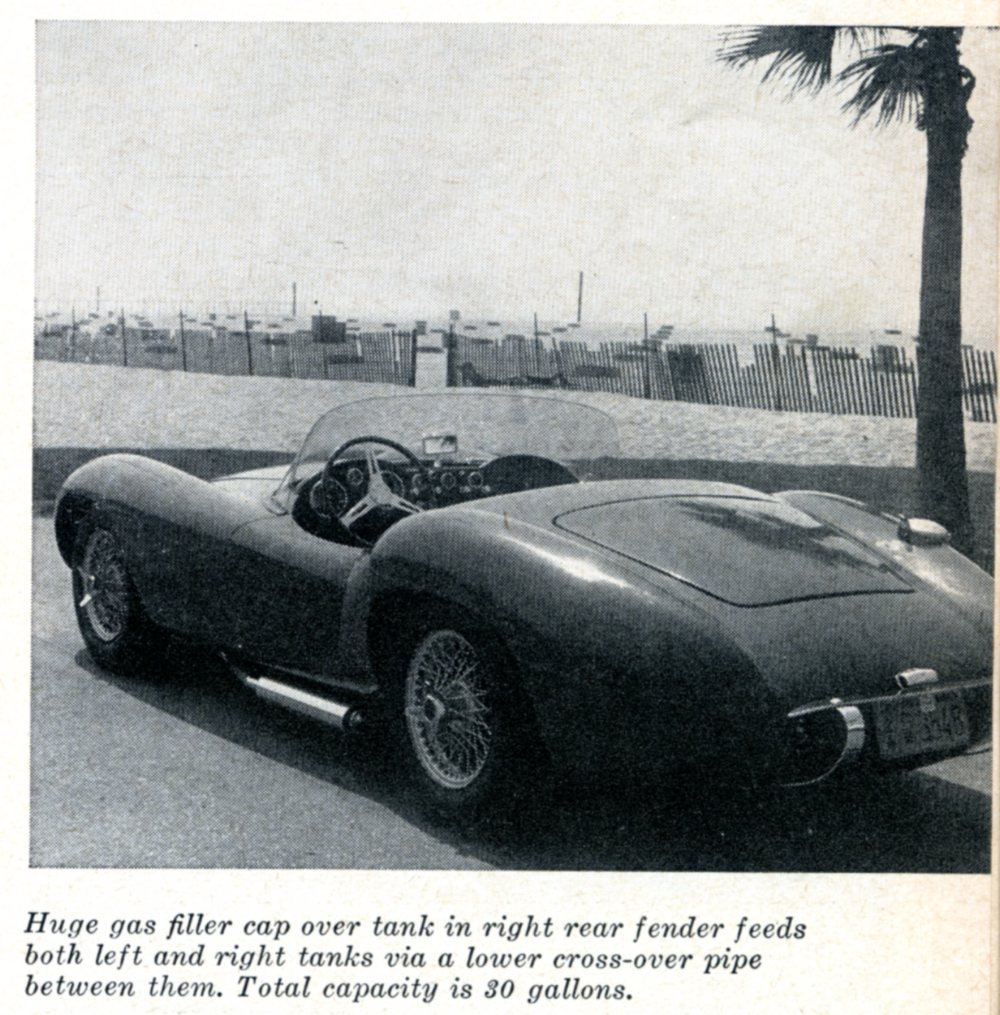 As can be seen in the data panel, the Devin SS with 220 bhp compares very favorably with the 290-bhp fuel-injected Corvette.  With a 290 Corvette in this chassis, no genuine road car could touch it.

A trip to the public scales showed the Devin SS to be a little tail heavy: with a 200-pound driver aboard, 53.1% of the weight is on the rear wheels.  The weight was checked with 15 gallons of fuel in the tanks, which is half the total capacity.

Ordinarily a tail-heavy car has distinct oversteering tendencies, but the Devin has almost neutral steering.  This is, apparently, due to the equal length, parallel front A arms which, by placing the roll center at ground level, introduce an understeer which balances the oversteer of the heavy rear end.  The trailing arms designed by Dr. Porsche for Auto Union, Porsche and VW accomplish the same result for these oversteering cars.

A Schiefer bronze-faced aluminum flywheel is used with a Velvet-Touch all-metal clutch disc and a special pressure plate assembly.  No clutch slippage was felt until Woods made a standing start in 2nd gear to see if we could improve some acceleration figures.  Using a 2nd-gear start we were able to reach 80 mph in just 0.4 seconds longer than it took using both 1st and 2nd gears.

The large speedometer error, shown on the data panel, was due to the wrong ratio drive gear being installed on the speedo cable: it was not instrument error.  Some slide rule work, correcting the ratio mistake, showed the instrument to be quite accurate.

The prototype windshield (plexiglass) had considerable distortion; production models will have laminated safety glass.  The general shape of the windshield will remain approximately the same as it is now.

The noise level is low even though the exhaust is released below the driver and passenger seats, and wind around the passengers was never bothersome.  As in an open car, wind burn still would be a problem on a trip.

The ride is somewhat on the stiff side but will probably not distress anyone who is used to sports cars.  A switch from a standard passenger car will undoubtedly make it seem very rough.  Very little body roll is noticed, even though no anti-roll bar is used.  In our opinion a softer ride would be more desirable from a comfort standpoint and would probably not hurt the handling qualities enough to matter.

We can’t imagine what anyone would want with this much all-out speed for street use, especially in view of the ever increasing speed restrictions being imposed, but if performance is a strong requirement of your purchase, you just won’t get this much anywhere else in a car available to the general public (for less than $12,000).

Lest every Corvette owner in the country think us out of our minds, we hasten to add that stopping, cornering ability and general control of the vehicle are all a part of performance.  The Devin SS is equipped to stop as well as, or better than, it will go, which is a great deal more than can be said for many of the high-performance cars in this country.

It is gratifying, for once, to find the brakes to cope with the hottest engine that could be put in the car as standard equipment on the stock version.

What a wonderfully positive review of an expertly designed and built sports car.  And if you didn’t believe it before, just follow along with what you’ve read above – there’s no greater confirmation of the high level of “build” the Bill Devin achieved when he put together his design for the Devin SS Sports Car. 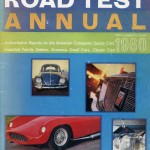 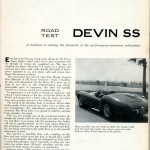 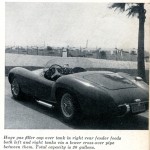 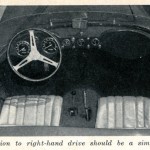 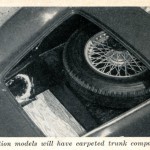 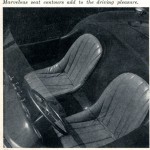 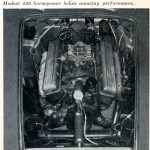 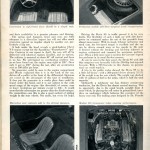 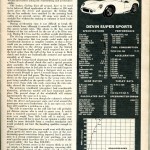 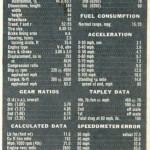 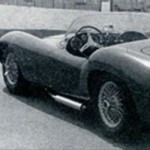