The red hood of the Victress glistened in stark contrast to the raw fiberglass…finally exposed from being hidden by years of paint, dirt, grime, and neglect.  You could almost hear the distant roar of Guy Dirkin’s “Lost Motor Trend Victress Special” coming to life for the first time since 1954.  It might be the first new part that’s being created for his car, but it’s a great first step in bringing back to life one of the most interesting Victresses built back in the day – and one that should have been – but never was – famous for everything it never had a chance to do.

It’s been over a year since I first heard about this car and tried to find a home for it.  This particular story was captivating enough that when I pitched it to Tom Cotter to include in his book for 2010….he asked that we write it up for immediate inclusion.  I’ll leave the details of the story to be reviewed in Tom’s book, but we can cover some of the basics here.

I first met Guy Dirkin when he showed up in Jon Greuel’s website contact list with a Byers SR100.  What a car that was – then and now – and you’ll see it featured in an upcoming story on Amelia Island Concours d’ Elegance.  But…suffice it to say that Guy’s Byers SR100 is a ground pounder from nose to toes.   Perfect in every way.  We became friends as I learned more about his car and shared with him the research I was doing on vintage fiberglass sports cars.  Several years later, after pushing and proding several people including Guy to buy what was an unknown Victress in Portland, Oregon…Guy finally “bit” and the car was on its way to Guy’s home….Chicago.

We knew at the time the Victress was special – it appeared in the 1955 Victress brochure – 3 times.  That couldn’t have been a random sampling of pictures.  It meant something, but just what?  How we made it from lost car in Portland to Fred Bodley’s Motor Trend Victress is a story in itself, and involves several people I’ve worked with before including Tony St. Clair – a member of our group and Glasspar G2 and LaDawri Conquest owner.  I can’t wait until the full story is published in Tom Cotter’s book next year.  You’re going to love it.

Cars seem to find their way down here to Florida where I live and one of my good friends, Jonathan, agreed to work on the car.  Jonathan is not an average fiberglass guy.  He’s an artist – nearly a musician – with the medium, and has worked with it for years.  I met Jonathan when I was looking for just the right person to help identify the best course of action in restoring vintage fiberglass projects.  The materials and techniques were not standard back in the early and mid-1950’s, and I needed someone to “bond” with the process and take the time to understand how to approach each car and its idiosyncrasies.   Jonathan already had that skill when I met him, and he took my knowledge one step further.  He works in epoxy/fiberglass.  This means the material is stronger, lighter, resistant to shrinkage (more so than fiberglass), and will extend the life of the fiberglass it is bonded to.  It’s perhaps the best way to finish one of these vintage cars – given their age and often their condition.  That is, the epoxy forms a protective coating over the fiberglass, which helps the original fiberglass maintain its integrity, shape, and strength.

Jonathan has started on the restoration of the Victress body and has made tremendous progress.  The pictures below show the extent to which the car has been stripped and is being prepped for the restoration of the glass to begin.  This hasn’t been easy…much of the underside cockpit area was burned, and there were some soft areas where the fiberglass had never completely hardened.  Ah it must be good to have a challenge.  To be young again….

I wish Guy and Jonathan the best of luck on the restoration of the car.  No doubt the “Lost Motor Trend Victress Special” will be a hit once its fully restored and Guy can help Fred Bodley reach the dream he had for his car.

Car at Petersen Publishing – on display – around 1954

Car at Petersen Publishing around 1954 – on Display 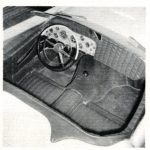 Interior of Car When New