This past year I was honored to present our 1947 Kurtis-Omohundro Comet at the 2012 Pebble Beach Concours d’Elegance.  The efforts to create a class of Sport Custom cars – the predecessors to our beloved forgotten fiberglass handcrafted cars – was several years in the planning.  And with automotive historian and car aficionado Ken Gross at the helm of this initiative, I’m pleased to say it was successful in every way.

Most anyone participating at such a well-heeled event would have spent the days before “Pebble” planning, preparing, and anticipating the Concours– and have no fear – I did too.  But when I hit the ground in nearby Sacramento, California on Wednesday August 15th, 2012 just days before the show….I knew I had a more important mission to complete.

I had to save the Testaguzza brothers’ long lost La Saetta sports car.

This particular car had successfully eluded me for nearly five years.  Not an easy proposition to achieve.  Each time I learned of its new location or owner…. it kept slipping away into the midst of space and time.  It was my own “Flying Dutchman” – albeit this one had wheels and was built from fiberglass.

We landed on August 15th, and sped quickly to the home of my good friend and college buddy Randy Abernathy who lived in nearby Folsom, California.   Carefully I considered how, without car, trailer, and time to spare, – and with the Pebble Beach Concours d’Elegance looming just four days away – I might convince Randy that the plight of the La Saetta warranted attention – a quest to save a long lost car….once and for all.

Randy jumped at the opportunity to participate and in just a few hours our plan was in place to begin our adventure on the next day.  Trailer secured and rented….gas in truck, hitch fit to tow vehicle, and off we would go.  Just four days and counting to “Pebble.”

But we soon learned that a fire that was raging north of Napa Valley, speeding fast and moving directly toward the coveted La Saetta.  I thought to myself, “Fear not, gallant sports car….Randy and I would speed quickly to your rescue.”  I slept restlessly the whole night.

So the next morning, we installed the hitch, picked up the car trailer, loaded plenty of fire extinguishers in case we needed them, and away we raced… radar detector firmly in place, pointed directly to the location of the car.  Fiberglass and fire don’t mix – we had to get there first!

So we drove and we drove – faster than we should.  We passed up the mighty redwoods in more than one beautiful California park.  We passed up the restaurants and wineries that were abundant throughout Napa Valley.  We passed up the beautiful mountain landscapes, the wonderful waterways and lakes, and only stopped to see two things – gas stations and the famed restaurant “Inn & Out Burger.”  Yum!  And we made it before the fire, because apparently… it was brought under control some time before we got there.

I should have watched the late news the night before.

Oh well, it was a fun adventure and took my mind off the anxiety provoking Pebble Beach Concours d’Elegance that was now less than 72 hours away.  And that story is for another day.

Below are several photos capturing the beauty of the La Saetta sports car – less than 20 were built and few have survived.   In its current condition, one of my good friends, Nora Gunn, thought it looked a bit like a “post apocalyptic batmobile.”  You’ll have to be the judge.

You’ll notice some photos where Randy and I stopped and captured the crispy fried hills and valleys that we luckily missed in Northern California – great pictures though.  You’ll also notice we had a challenge getting the La Saetta up to the side of Randy’s house.  With the help of his neighbor and a trusty ATV – we were “In Like Flynn.”  Let’s take a look at some photos…. 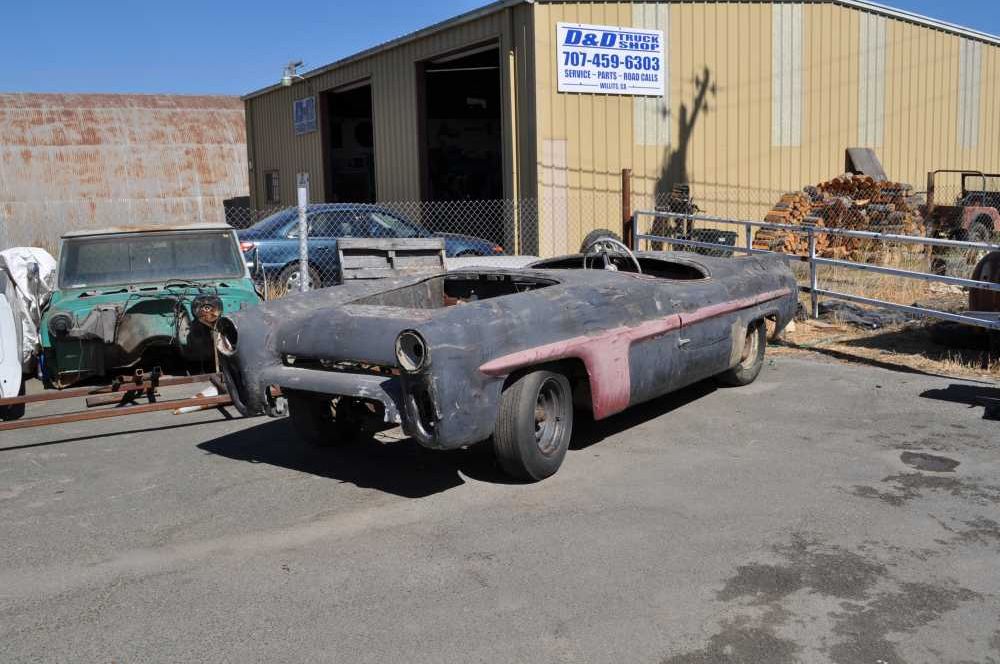 Here’s My First Glimpse of the LaSaetta – I ran to it to get this photo. The Five Year Chase Was Now Over. 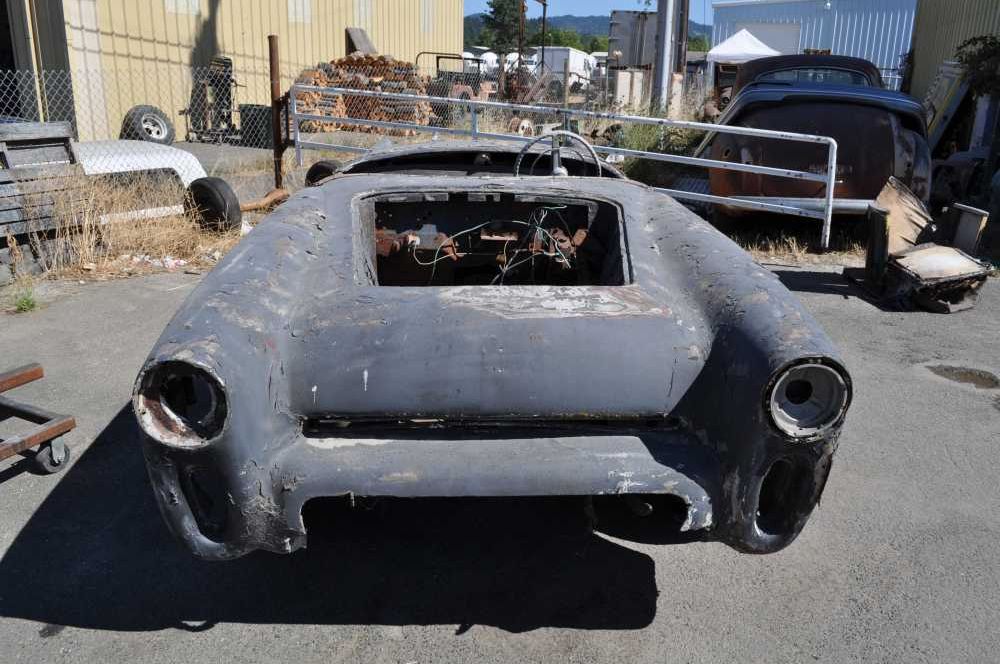 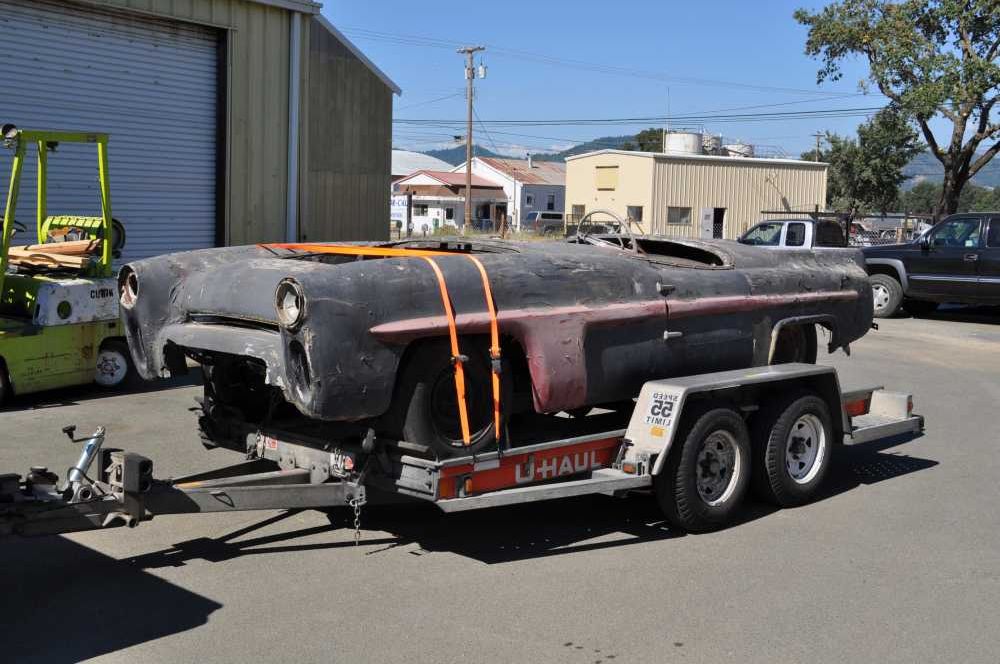 Thankfully We Can All Rent Trailers… 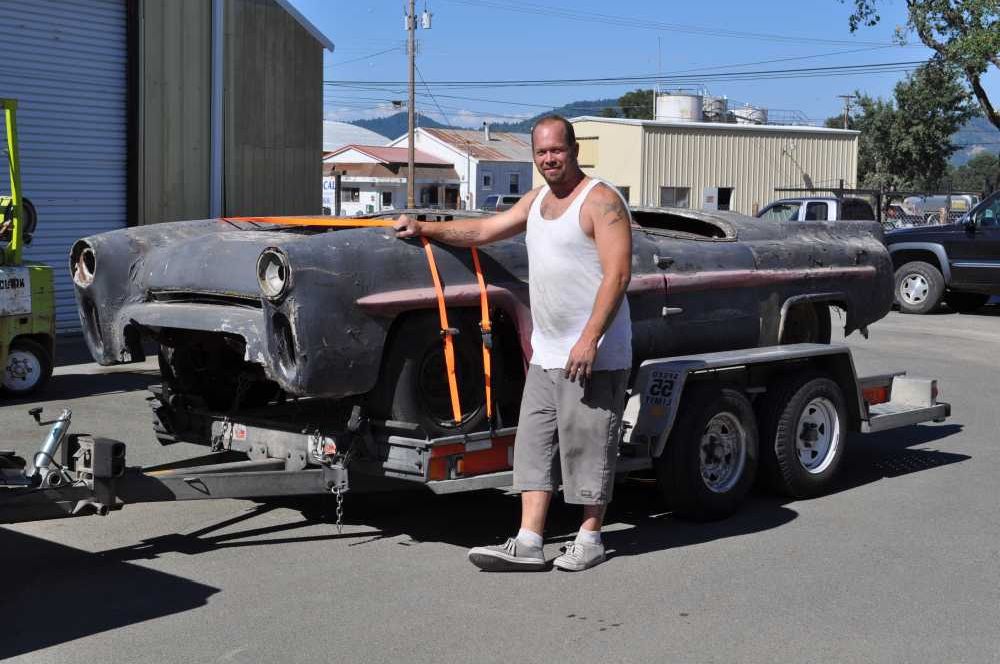 Here’s The Owner Saying Goodbye to His Car One Last Time. 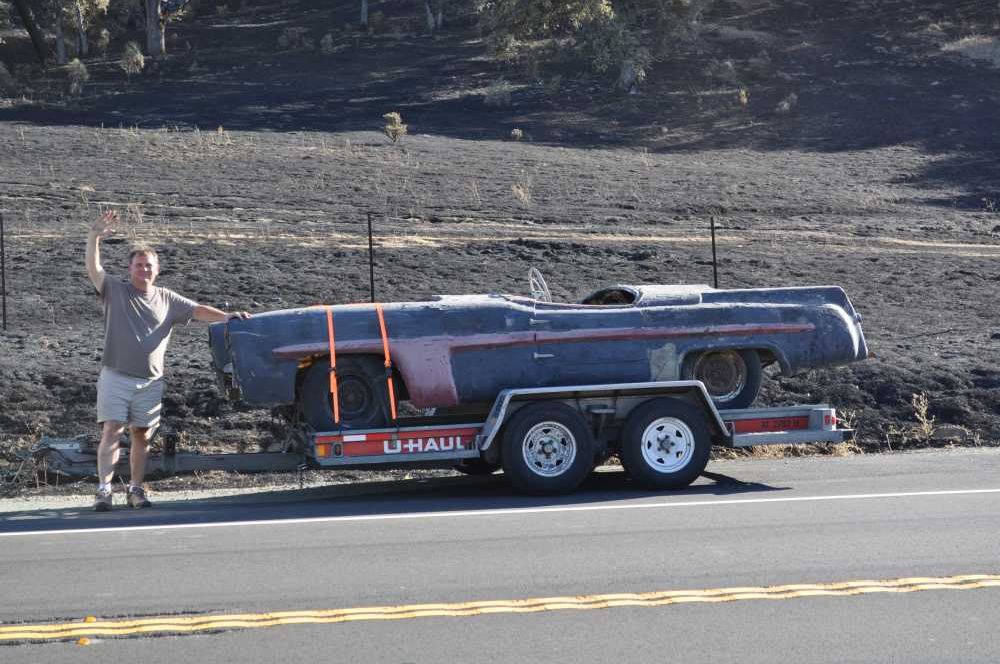 Here I’m Shown With the La Saetta with the burned out remains of a field behind us….”A Man And The Car He Saved…” 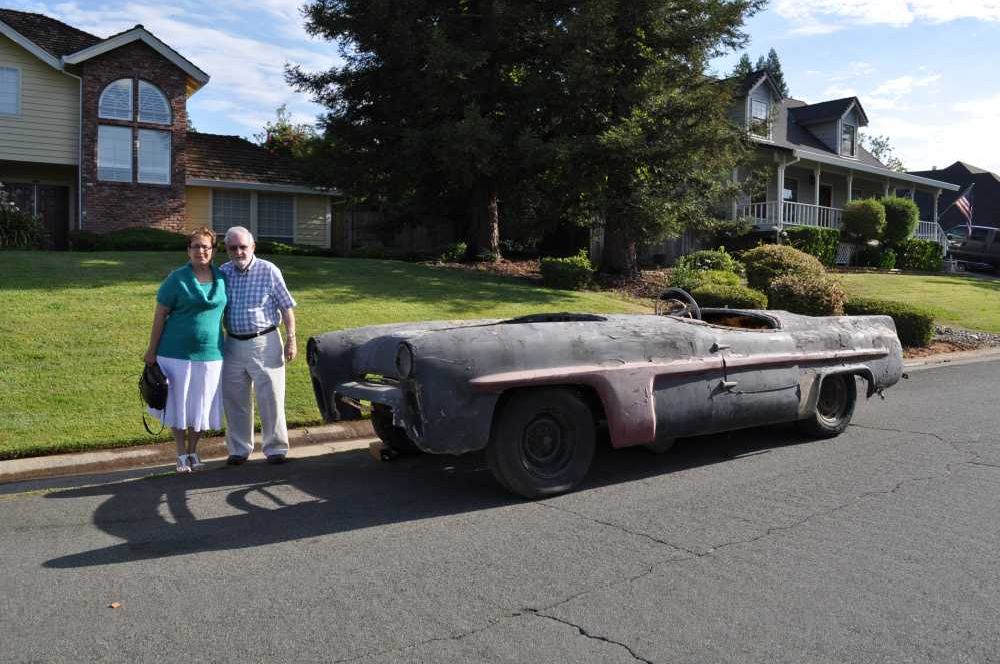 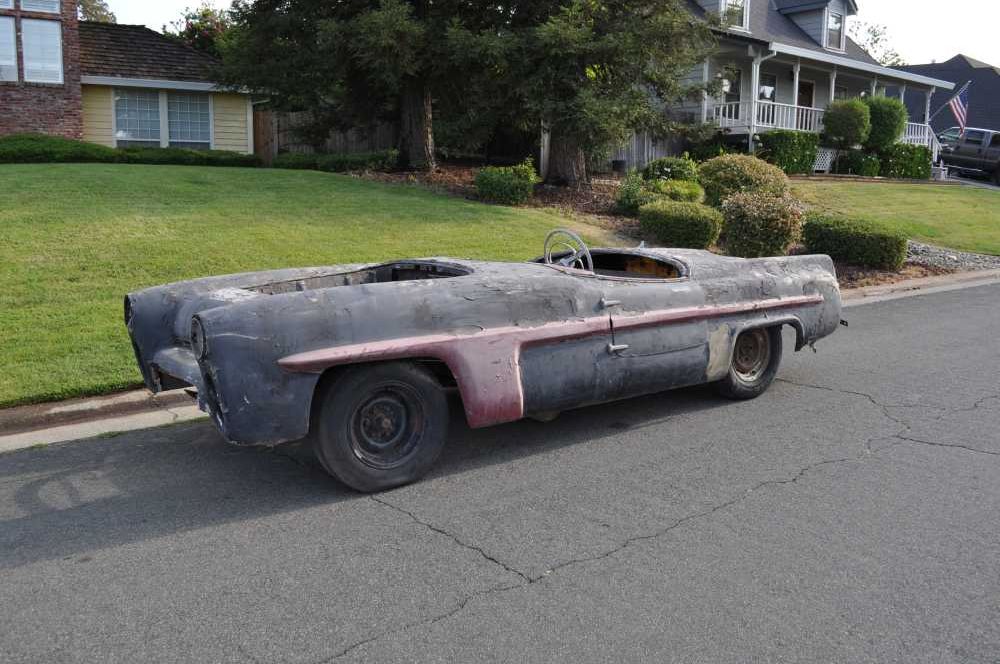 Imagine The Restored La Saetta on the Grounds of a Concours Near You. This Was Completed in 1952 – that’s darn early for a fiberglass sports car gang! 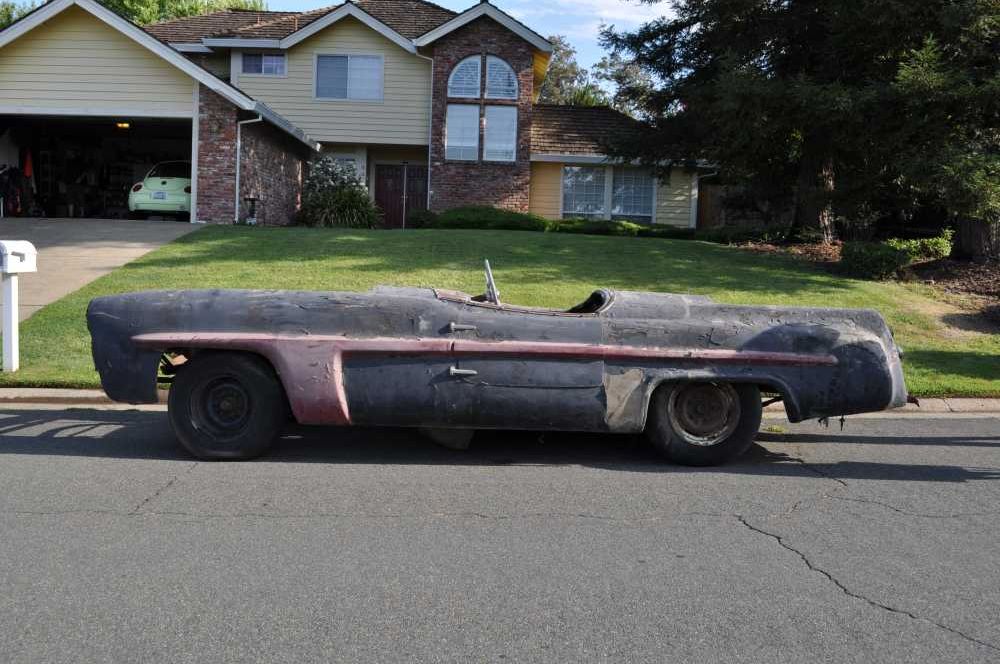 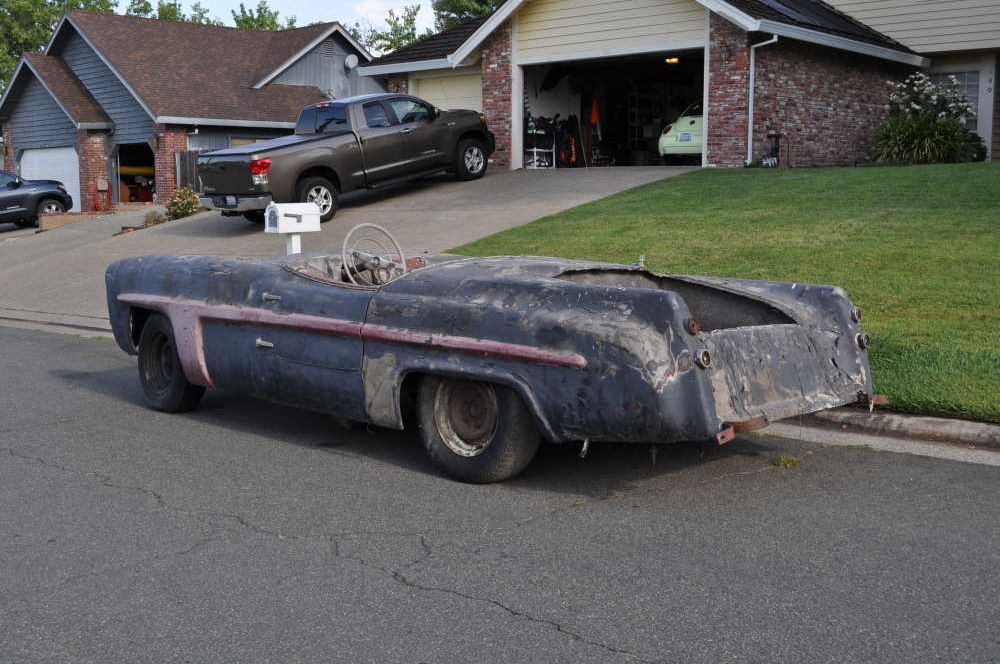 The La Saetta Awaits Its “Push” up the driveway – the closest it will be to a garage in nearly 50 years. 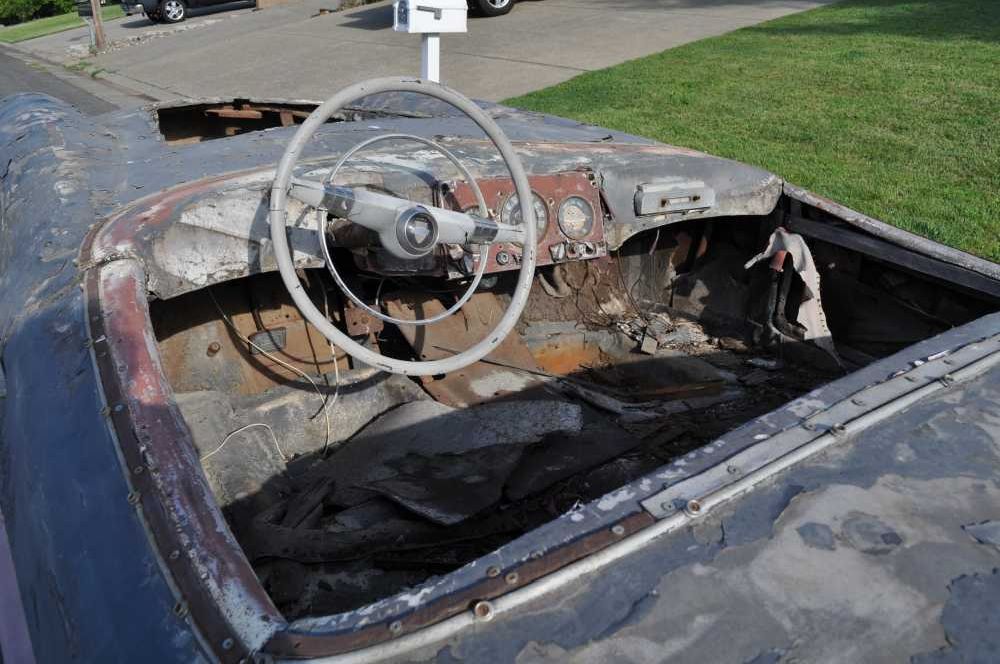 Chevy Chassis and Some Mechanicals Were Used To Build This Car. 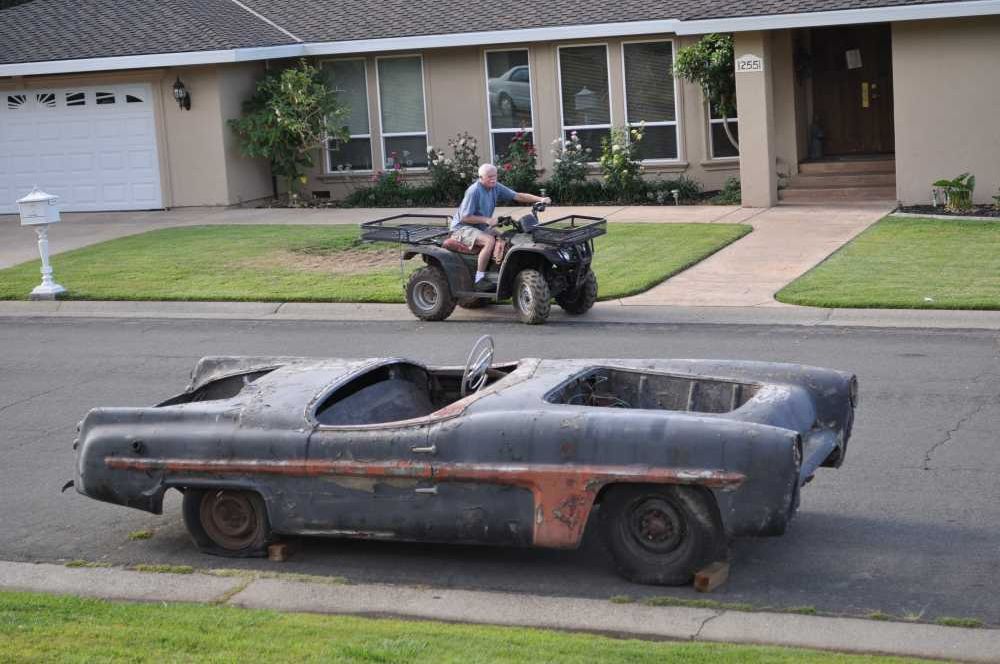 Randy’s Next Door Neighbor Surveys The Challenge – Launch the La Saetta Up The Inclined Driveway. 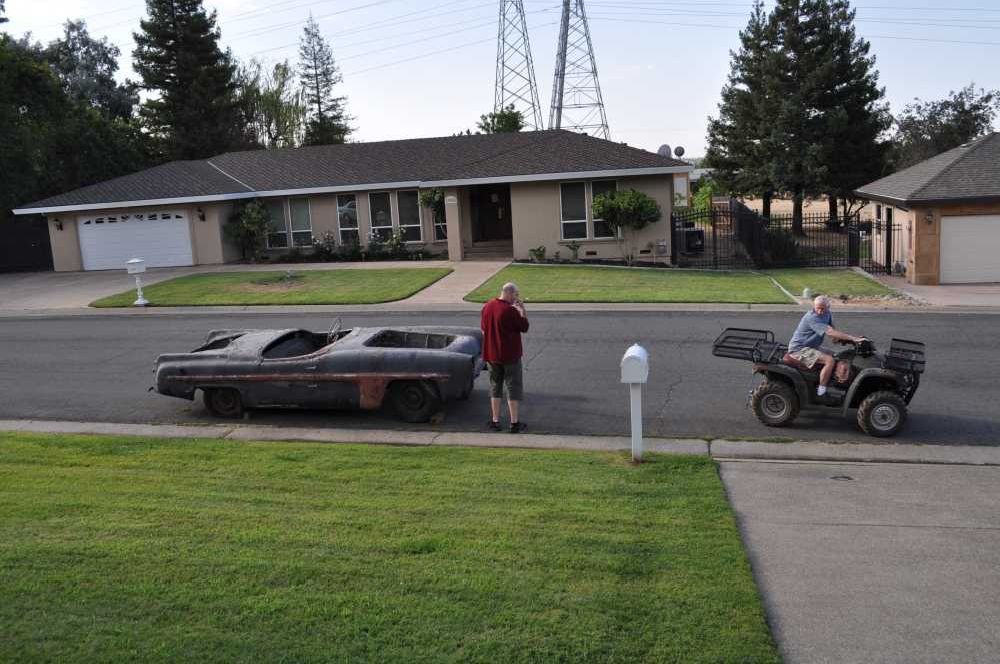 Here Randy is Probably Questioning His Judgment In Allowing Me To Bring the LaSaetta Back to His Home For Safekeeping. 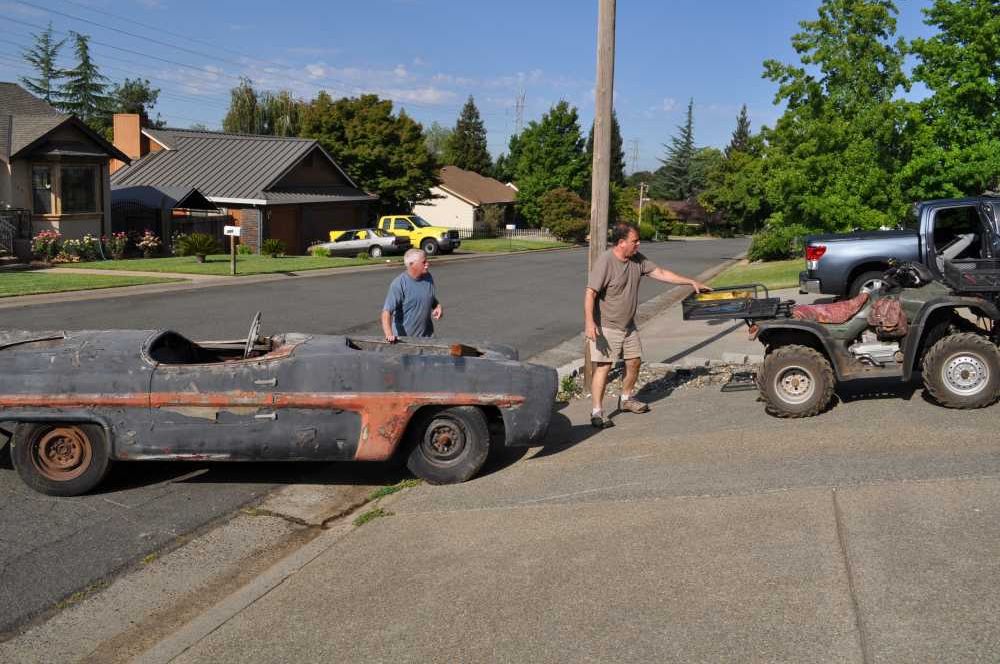 A Rare Picture of Geoff at Work 🙂 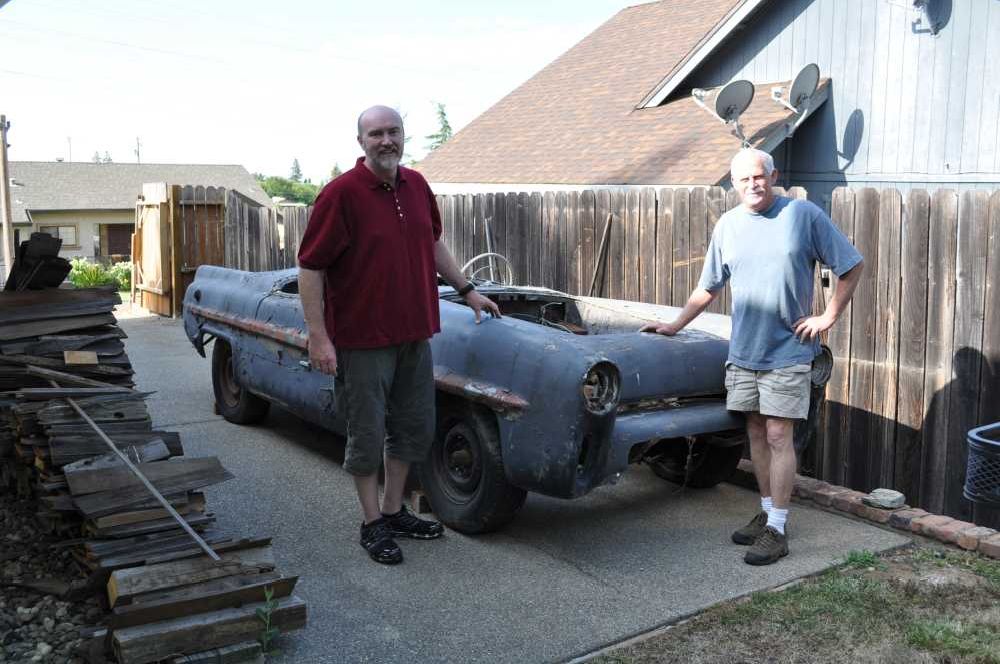 Randy Abernathy and His Neighbor Standing With the La Saetta – Successfully Moved to the side of his Home. 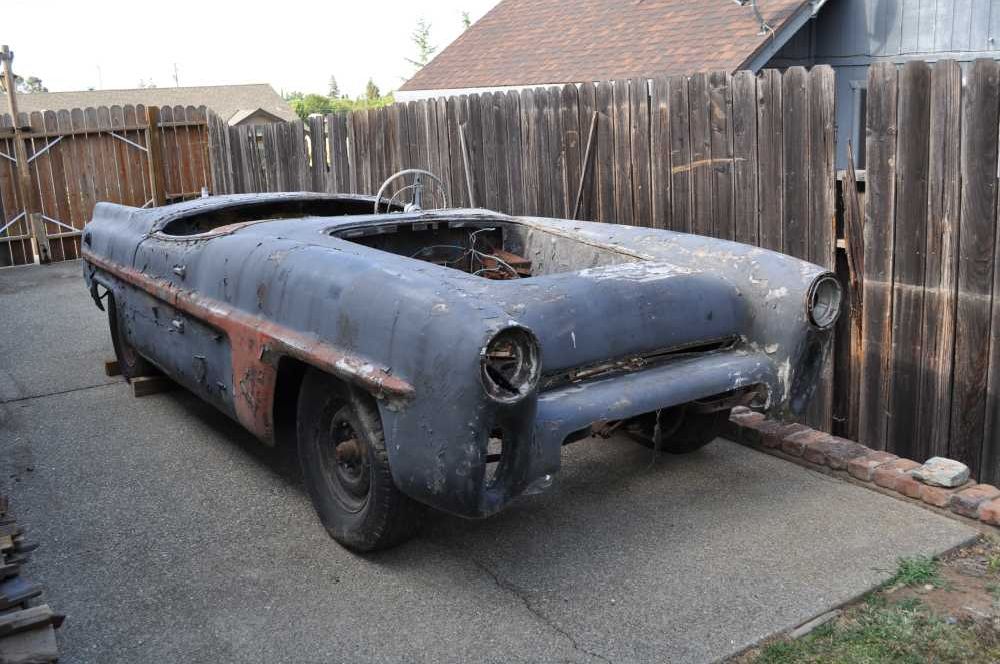 A Quiet Moment of Rest for the La Saetta. 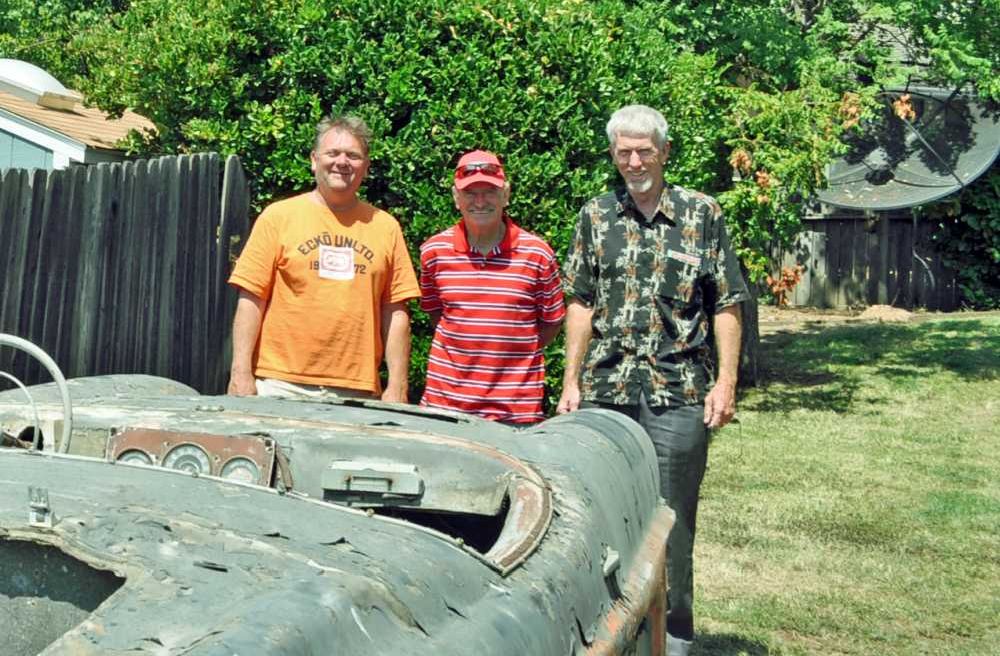 Bill Quirk – Production Manager For Victress From 1952 Through 1961 Joined Rick D’Louhy To His Left (picture right) to Check Out the East Coast fiberglass sports car “competition” from the early days of ‘glass sports cars. 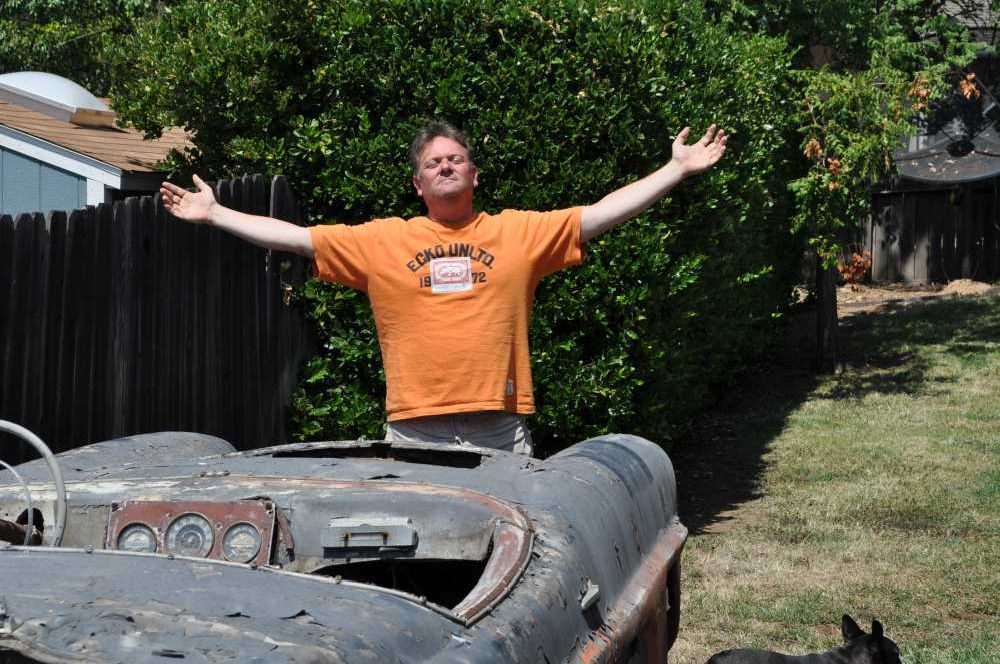 Here I take a quiet restful moment to reflect that all went well, no one got hurt, and one more fiberglass sports car was saved.

I hope to begin restoration of the car in the near future – I have to get the car home to Florida from California – any of you guys and/or gals heading this way with an empty trailer?  I’ve got gas money waiting for you (and more) here in Tampa, Florida *wink*

And..for those of you wanting to learn more about Testaguzza’s La Saetta sports cars, click on the link below.