Establishing specific dates for the entry of a new car into the market is essential with any historical review and retrospective.  We get out the magnifying glasses here at Forgotten Fiberglass, and with a bit of hard work and luck today, we found our first confirmation of a date for the introduction of the “Super Skorpion” which is late in 1952 – earlier than we previously thought.

The Skorpion had just premiered at the November 1951 Petersen Motorama, and was featured on the cover of the April issue of Motor Trend in ’52 as well.  Click here to review the April ’52 story on the Skorpion.  But my how things can change quickly, and within just a few months John Wills and Ralph Roberts sold the rights to manufacture the Skorpion to Doug Carruthers and his company Viking Craft, located in Anaheim, California.

So in late 1952, Viking Craft was now taking orders for kits and assembled cars and was also introducing their newest car – the “Super Skorpion.”  Let’s take a look at the announcement that appeared in the August ’52 issue of Motor Trend: 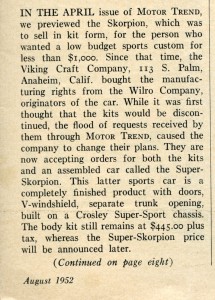 And At Presstime:
Motor Trend: August 1952

In the April issue of Motor Trend, we previewed the Skorpion, which was to sell in kit form, for the person who wanted a low budget sports custom for less than $1000.  Since that time, the Viking Craft Company, 113 S. Palm, Anaheim, California bought the manufacturing rights from the Wilro Company, originators of the car.

While it was first thought that the kits would be discontinued, the floor of request received by them through Motor Trend, caused the company to change their plans.  They are now accepting orders for both the kits and an assembled car called the Super Skorpion.

This latter sports car is a completely finished product with doors, V-windshield, separate trunk opening, built on a Crosley Super-Sport chassis.  The body kit still remains at $445.00 plus tax, whereas the Super-Skorpion price will be announced later.

What was the Super Skorpion?  One super fast tiny tyke sports car.  Good friend Don Edmunds who created the Cheetah sports car with Bill Thomas in the ‘60s was working for Doug Carruthers in the early ‘50’s, and was part of the team that installed the Ford V8-60 flatheads into the Super Skorpion bodies and chassis.

Then they took them to Carrell Speedway in Cardena, California and raced them.  Don had a blast at the track against Doug and as he recalls he beat Doug and which made Doug quite upset.  We’ll tell that full story another time here at Forgotten Fiberglass.

Some noteworthy issues about this brochure.

First, it doesn’t mention the V8-60 heritage that the Super Skorpion is mostly known for.  That fact coupled with the concept drawings and no images of real cars suggest this may even be a late 1952 brochure before the car was fully built and available.  As the Motor Trend article suggested above, this may have been the brochure used to excite customers and complete their “order” in anticipation of a Super Skorpion delivered in the near future.  Additional research will help us confirm this possibility.

The Super Skorpion had a 5” longer wheelbase than the Skorpion (80” vs 85”) and fully functioning doors that opened and closed. 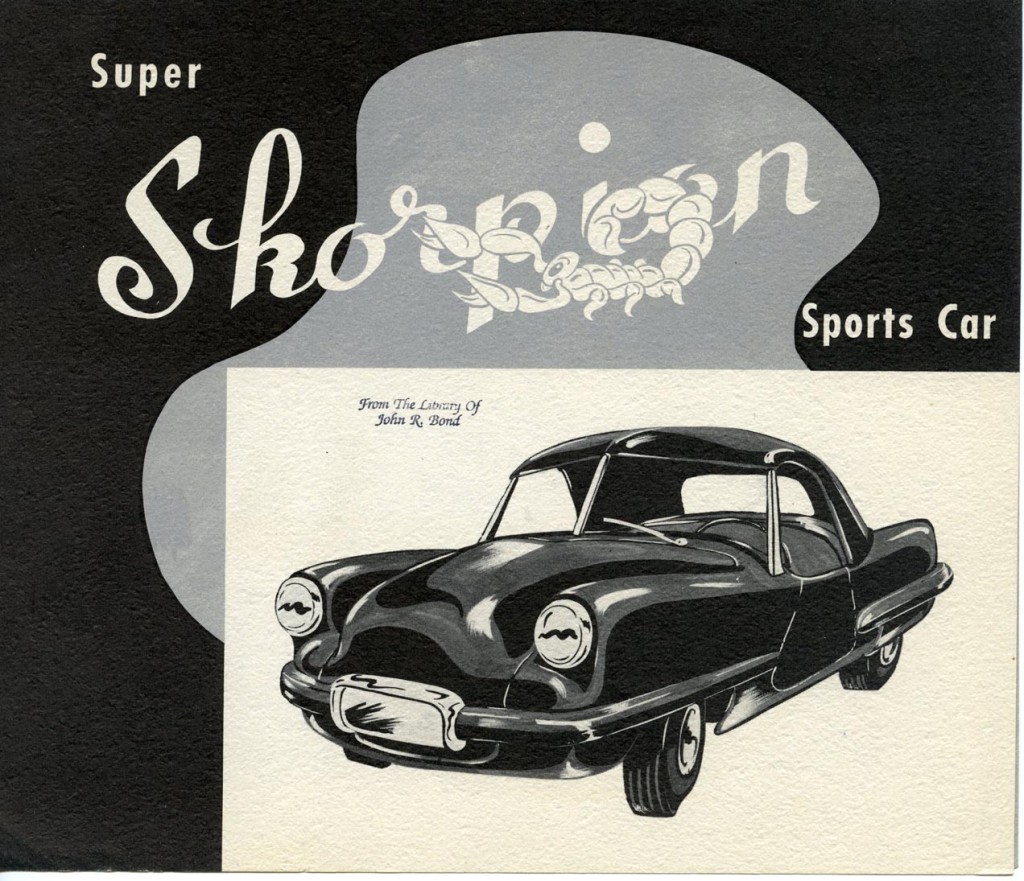 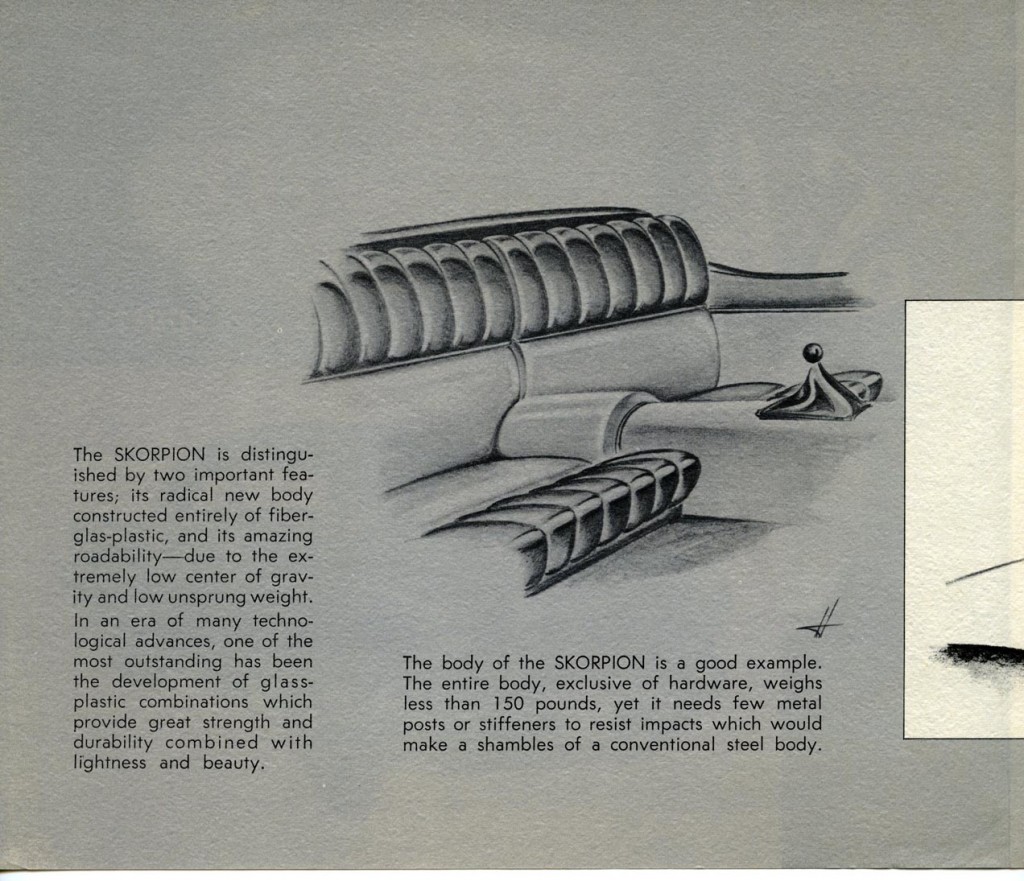 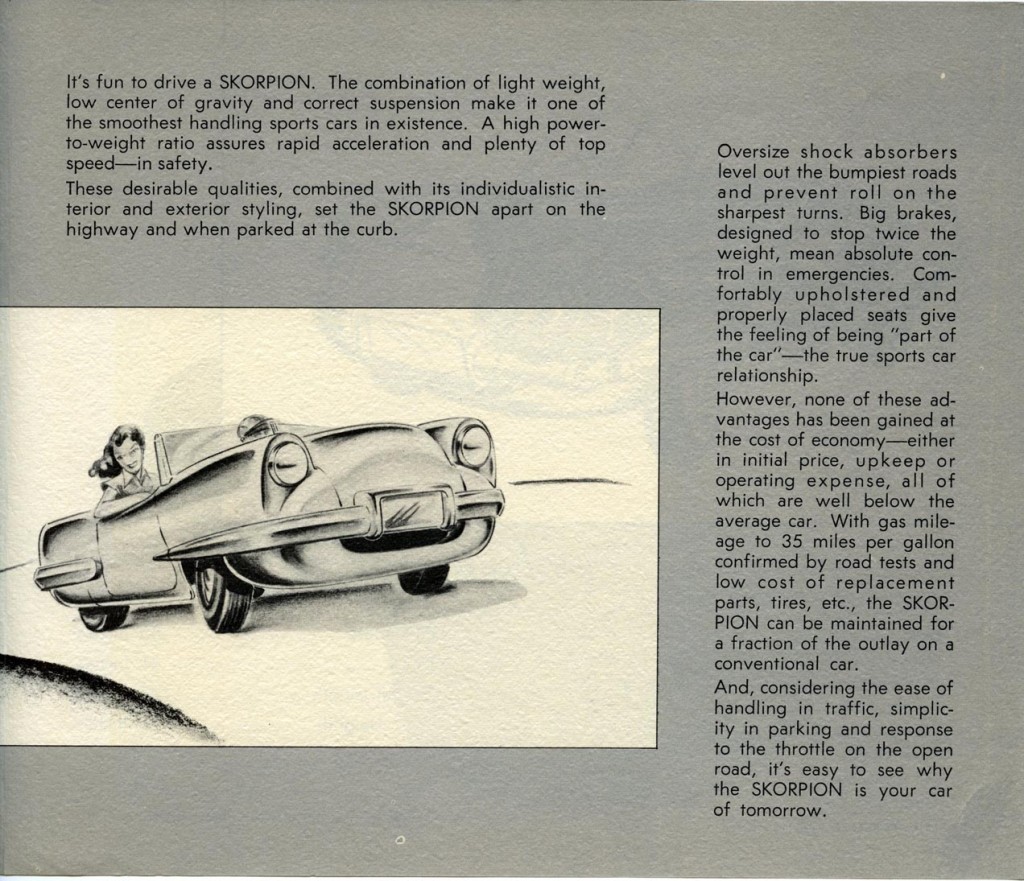 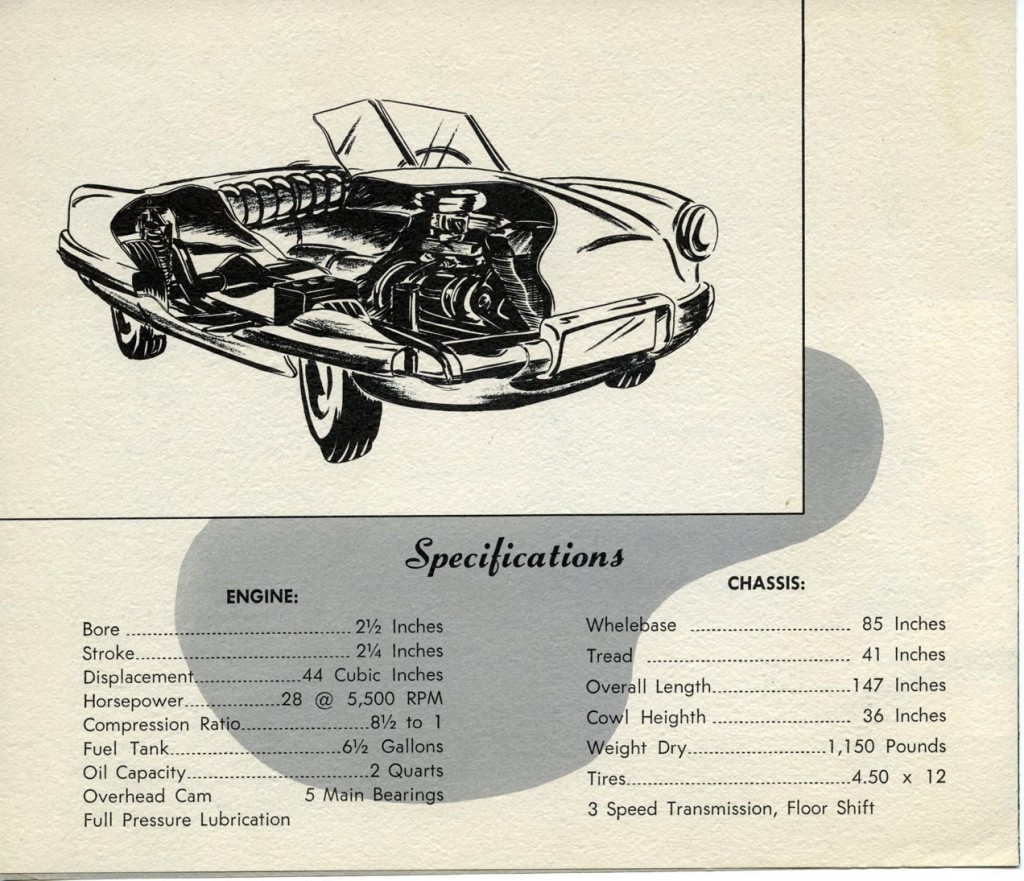 It’s interesting to note that it looks like Viking Craft’s initial intention was to produce completed cars only – just like the Super Skorpion.  I bet the demand after the November ’51 Motorama along with the publicity received after the front cover appearance of the Skorpion in the April issue of Motor Trend changed the game.  Kits would be available – as they originally were planned, but now completed cars would be sold too – and the new fully built Super Skorpion.

Those of you who know of Doug Carruthers knew he was a masterful entrepreneur, so it makes sense that his plans were ambitious from the start.  He was a businessman too, so no doubt the sales potential of kits to a ready and willing market looked good too.  From Doug’s vantage point in late ’52, I bet it looked like he could have his cake and eat it too.

The Super Skorpion was a definite upgrade in size, convenience, and power (assuming it had a V8-60) when compared to the Skorpion, but very few were made and sold.  The Skorpion family of cars would change hands once again by late ’53 / early ’54.   The reason for this sale was that Crosley chassis’ would no longer be available for in 1953 – they stopped producing cars.  Without a steady supply of easy to purchase new parts, Doug Carruthers had no reason to continue, and sold the company to “Holloway Sports Car Center” of Los Angeles, California.

Holloway Sports Car Center continued sales of kits and then sold the company again in late ’56 / early ‘57 to “Al’s Garage” in Phoenix, Arizona.  For one cute small car, it sure was a fast mover!

Update: 11/17/2011:  In preparing the follow-up to this story, it occurred to me that this brochure from 1952 is not “badged” with the company “Viking Craft.”  Doug Carruthers of Viking Craft was a consummate business man, and the likelihood that this was an “oversight” is fairly remote.  It’s also telling that an image is not shown of the real car – pointing to the fact that this car was most likely still a concept at the stage this brochure was printed.  It’s also interesting that the “Wilro” company is not shown either.  This is definitely a “transition” piece that was done either at the end of “Wilro” or beginning or prior to the Viking Craft acquisition.  Just my thoughts gang. 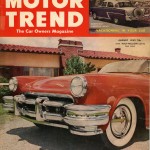 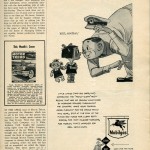 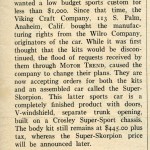 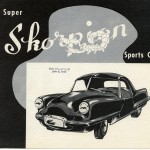 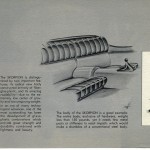 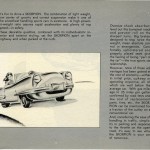 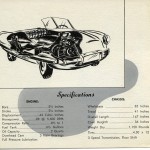 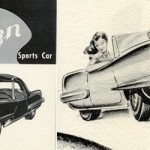