I’ve had the honor of knowing Brandon Kunicki for several years, and for several reasons too.  One…he’s a great car guy and dedicated to the history of his car and his family’s ownership of it.  And two… the car that he owns is a wide-body (100” wheelbase) Allied “Falcon” coupe.

One great guy and one great car – in that order. 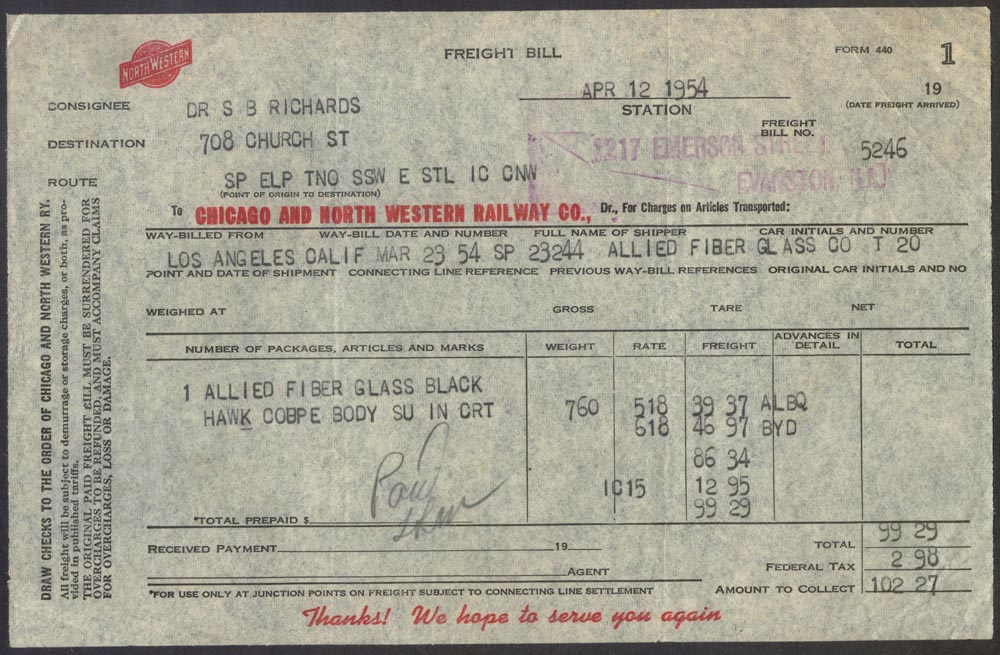 How Many Times Can We Glimpse Original Shipping Documents From a Company Like Allied To The New Owner? Probably Few And Far Between. Here The Initial Shipment Date is March 23rd, 1954. This Is The Kind Of Detail Rick D’Louhy And I Are Looking For To Establish Clear Operation Dates For Each of These Fiberglass Companies. Thanks Brandon For Such Wonderful Documentation!

Brandon actually is the most recent caretaker of this car.  His father, Dennis Kunicki, had been the owner since 1961 – this is one long-term fiberglass sports car family (and one of the longest owners of an Allied too!)  Recently Brandon wrote to me updating his research efforts on the car.

Let me share with you a bit of what he wrote: 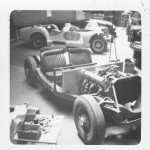 Here You Can See The Dr. Richards Allied Special Being Built – With One Of Brooks Stevens Excaliburs in the Background. Picture Taken 1955-1956.

The car I have was built by Ullrich Automotive (Evanston, Illinois) in 1954-1956 using a modified 1950 Ford Chassis and an Allied Falcon fiberglass body. It was built for a dentist named Dr. Stanley B. Richards.

It had a 1953 Cadillac 331 engine, 1937 LaSalle trans and red Jaguar XK-120 seats. The car was painted overall red and had chrome tubular bumpers front and back with silver Dayton wire wheels. It also had a custom fabricated intake manifold with 4 Carter YH (Corvette) sidedraftcarburetors.

My dad bought the car in April 1961 from the second owner and may have had some work done on the car at Ullrich Auto after that. 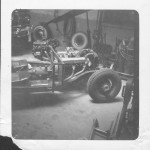 Great Vintage Shot of Frame and Drivetrain in Place. This Must Have Been One Heck Of A Car To Handle (And Race) On The Road.

It turns out that Ullrich Automotive was closely connected with Brooks Stevens – Stevens was just north of Chicago about 90 miles – and Ullrich helped build (or entirely built) the famous Brooks Stevens Excalibur cars in the mid 1950’s.  In one of the vintage pictures of the build of the “Dr. Richards Special”, you can see one of the Excaliburs being serviced (or built) in the background.

I think the best way to introduce this car is to run an article about this car that appeared in an Evanston newspaper back in 1957.  Let’s have at it gang!

The car, representing nearly four years of spare-time work, was the only owner-built car in the show.  A placard on the car revealed that this is the “Richards Special,” it is “still under construction.”  It has an all-fiberglass body with a 1950 Ford frame and running gear, and a special 1953 Cadillac engine.

The opened hood (right; looking down from immediately above) reveals the top of the  eight-cylinder motor.  Dr. Richards’ hand and pipe (upper left) are pointing to one of the intake manifolds which he designed and built in order to bring the four carburetors – one at each corner, assembled according to his design – within the height and space limitations of the hood.

The fuel mixture is kept in equilibrium for all cylinders by the “equalizer” tube (center ) joining the two banks of manifolds.  The Richards Special is capable of a speed of 140 mph, can accelerate from 0 to 60 mph in 6 seconds, is 4 feet high, 13 feet long overall and 56 inches wide.  It weighs 2,560 pounds and has a power to weight ratio of 1 horsepower to 10 pounds.

Cut Down Frames:  Dr. Richards got many of his basic parts from wrecked or scrapped cars.  This was true of the frame and motor.  The frame was too long and not wide enough to fit into the fiberglass body, which he bought as a rough unfinished shell in California. 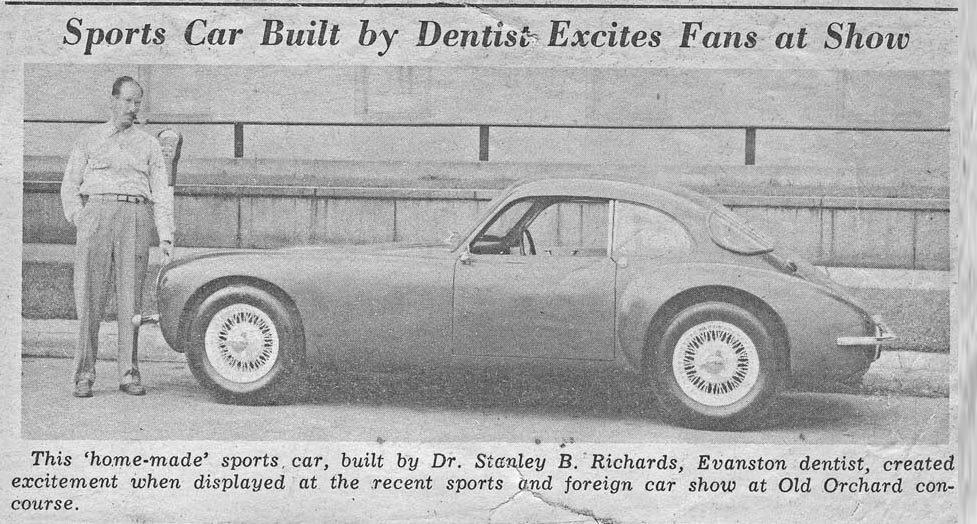 In shortening and spreading the frame, Dr. Richards called on Ullrich Brothers Automotive Engineers, 2516 Green Bay Road, for advice and help and the use of the needed heavy equipment.  Although he had much professional help, most of the construction was done by Dr. Richards in the garage at his home at 2116 Ewing Avenue.  He recently moved from there to Wilmette.

Other cars from which parts were adapted, and the parts were: 1937 LaSalle gearbox; Chevrolet mufflers; Nash sun visors, Lincoln pushbuttons; Mercedes horns and windshield wipers.  The “knock-off” wire wheels from Zenia, O are equipped with Metzler (German) racing tires….

The remaining part of the article is missing, but hopefully Brandon will be able to find this missing part as his research continues.

Brandon is continuing to research the early history of his car, and has begun the restoration of it too.   In the next story on the Dr. Richards Allied Special, I’ll feature current pictures of it (under restoration) and additional background on the car.  Keep up the good work Brandon and family!

Each of our cars continues to have this impact and cause this type of reaction at shows across the world – even more so today.  Don’t forget this gang….you are part of a very small group of owners and enthusiasts of the cars, and you are “Ambassadors” of these cars to all other automobile enthusiasts.  We have a lot of cool information and great cars to share – including the Kunicki family’s “Dr. Richards Allied Falcon Special.” 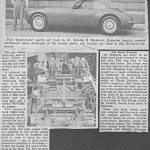 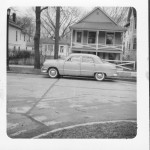 Here You Can See The Dr. Richards Allied Special Being Built – With One Of Brooks Stevens Excaliburs in the Background. Picture Taken 1955-1956. 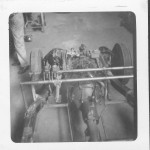 Great Vintage Shot of Frame and Drivetrain in Place. This Must Have Been One Heck Of A Car To Handle (And Race) On The Road. 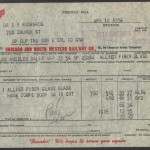 How Many Times Can We Glimpse Original Shipping Documents From a Company Like Allied To The New Owner? Probably Few And Far Between. Here The Initial Shipment Date is March 23rd, 1954. This Is The Kind Of Detail Rick D’Louhy And I Are Looking For To Establish Clear Operations Dates For Each of These Fiberglass Companys. Thanks Brandon For Such Wonderful Documentation! 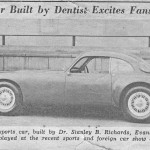 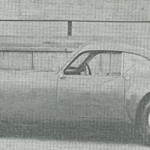